A thousand glass artists, experts and collectors swarmed Norfolk in early June for the Glass Art Society’s (GAS) 46th annual conference, hosted by the Chrysler Museum of Art and Perry Glass Studio. The conference partly focused on a specialty being pioneered here—performance art utilizing glass. GAS attendees came from as far as Japan to see presentations by world-class artists. A few lucky area glass artists also were chosen to give lecture-demonstrations, bringing their work before an elite, international audience. Here’s a peek into their sessions.

As Heather Hartle, 61, begins her talk and demo on glass cameo engraving, she asks those gathered in the education lab at the Chrysler Museum of Art if there are any engravers in the room. One person raises his hand.

Cameo is a centuries-old engraving technique with few current practitioners. The process requires tons of patience and hard-to-find equipment. Hartle, a Williamsburg artist, specializes in it. 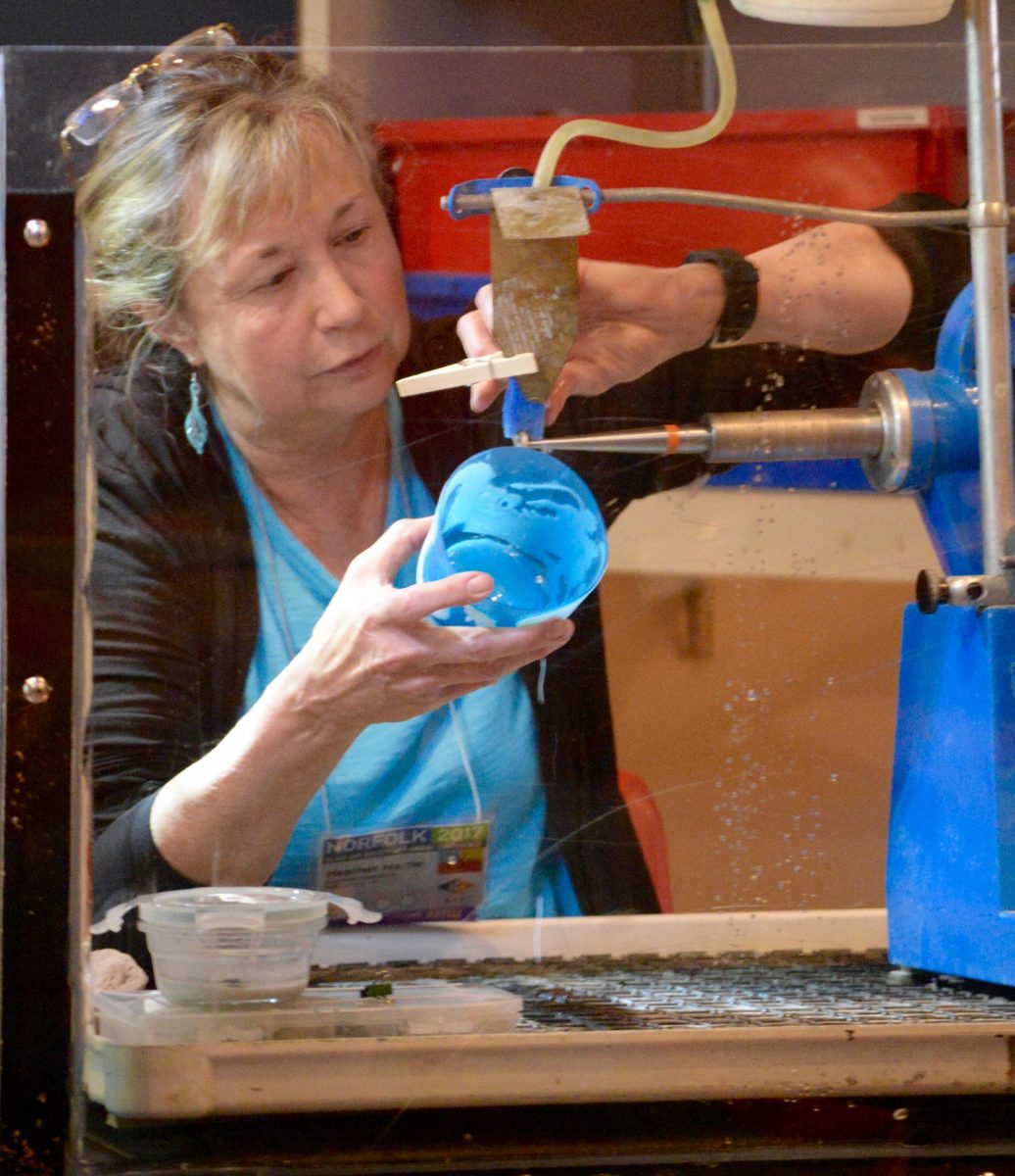 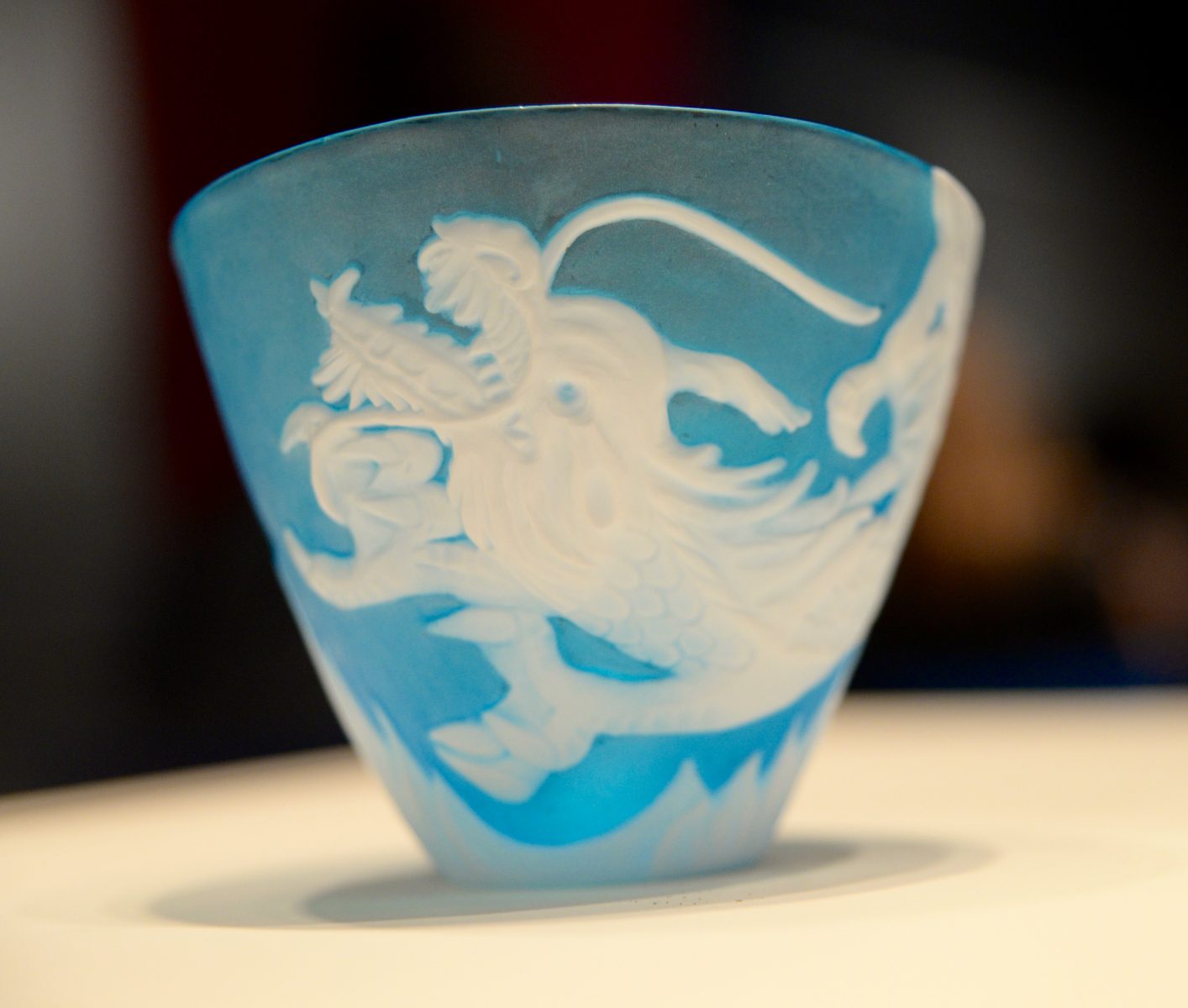 Photo by Meredith Gray for the Chrysler Museum

Looming on a screen is a photo of Hartle’s “Fire Dragon” vessel, her version of an English piece in the Chrysler collection that also features dragons. Both works share a base color of blue, with a carved white outer layer.

Unlike secretive, old-time glass artisans, Hartle seems happy to share her process. She makes a sandwich of flat glass, usually white atop a color, and fuses them in a kiln. She then sets her sandwich over a “drop mold” with a hole in the center. Heat from the kiln causes the glass to droop down into a bowl shape. She trims the dropped glass at the rim. 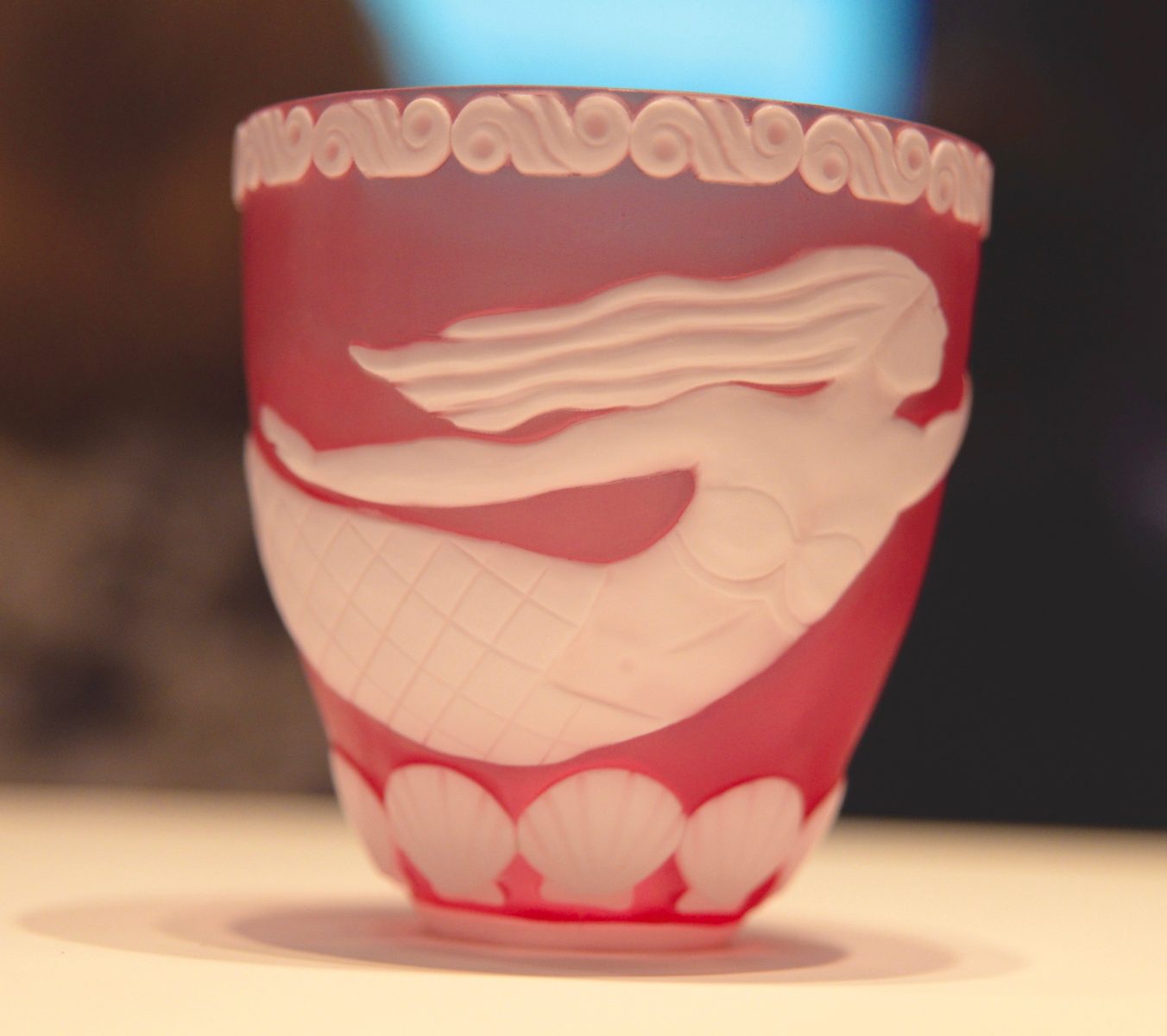 Photo by Meredith Gray for the Chrysler Museum

After sandblasting away large areas of unwanted white glass, she begins the painstaking task of engraving the design, using copper, stone and diamond wheels attached to a spindle on a lathe. She needs oodles of tools.

One source is her dentist, who brings joy to her visit: Every time she goes, he hands her a bag of used diamond drill bits.

Hartle, was in three local glass shows during GAS, and was president of the Virginia Glass Guild the past three years. EngravedInspiration.com 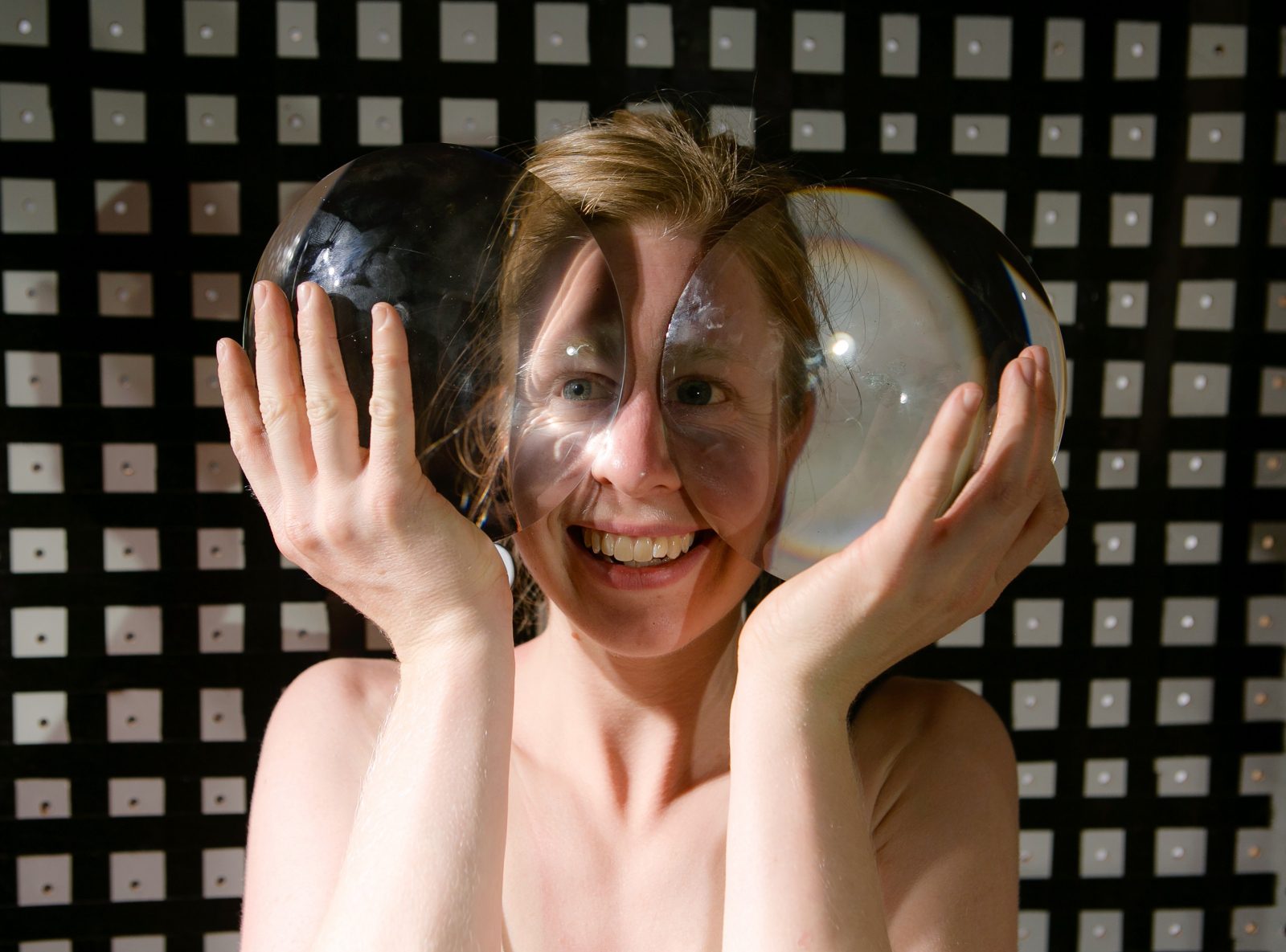 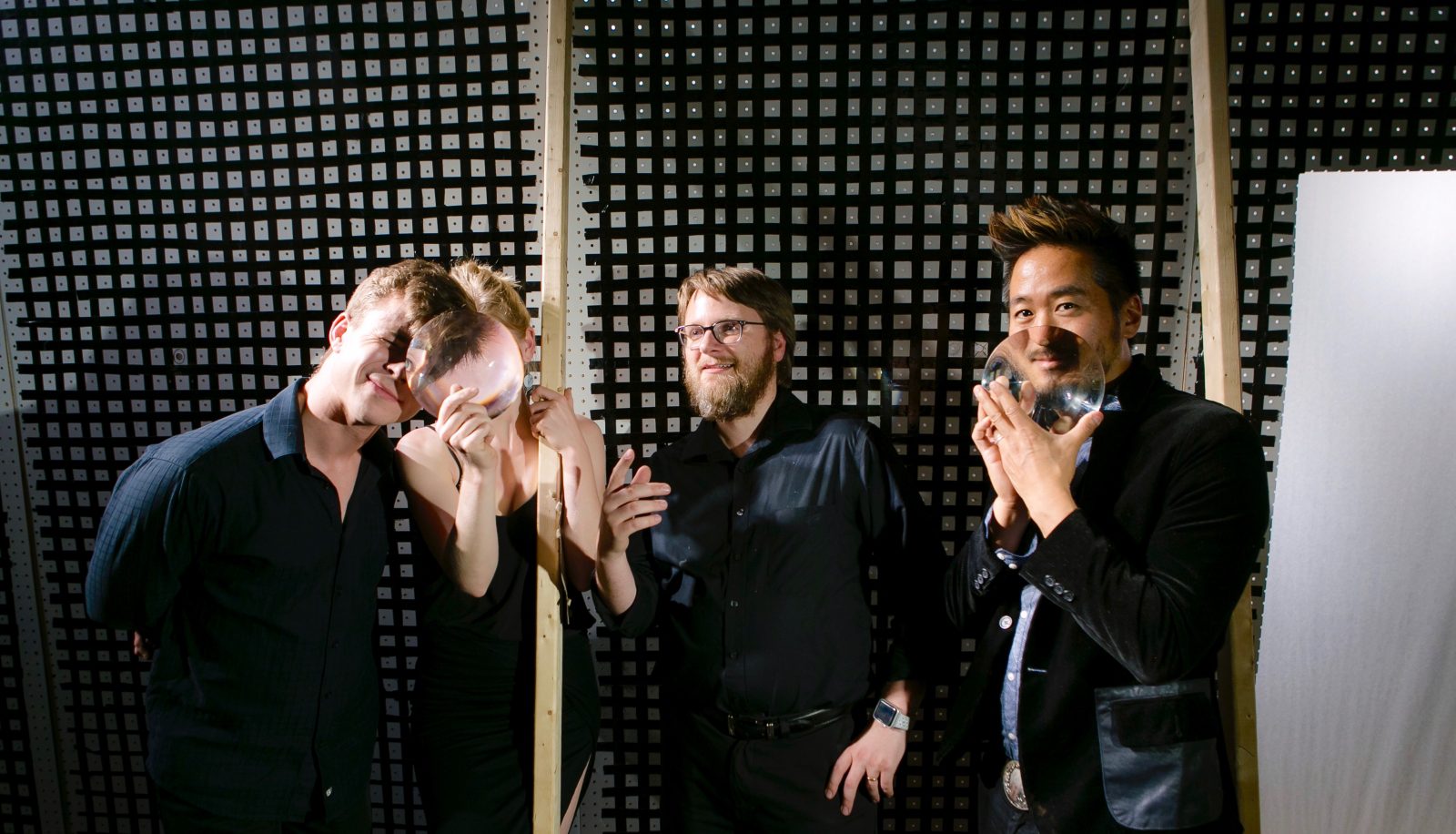 Photos by Echard Wheeler for the Chrysler Museum

Hannah Kirkpatrick, 28, hustles with her team inside the Chrysler Museum Glass Studio to get ready for her 9 p.m. multi-media performance, “Where Darkness Meets Light.”

Kirkpatrick has asked Paul S. Kim, who teaches music at Old Dominion University, to write a soundtrack for her 45-minute piece. The players are violinist Kishi Bashi, a rising national artist with a penchant for looped sound, violinist Grant Gilman and cellist Ian Robinson.

A “screen” stretches 20 feet across the hot shop, consisting of pegboard plus tracing paper hanging two feet in front of it, to catch the light to be projected through the board’s grid of holes from behind.

Kirkpatrick addresses the audience, “Hello, GAS-itians! You’re in for a phantasmagorical evening.” After crediting her seven-member crew and the musicians, she states, “This is a story about loss and is dedicated to my father, Bryan.”

Then she slips backstage, where her crew trains clamp lights, neon, candles and other light sources at the pegboard at different distances and in varying ways. The result is a largely abstract play of light, shadow and color on the screen that suggests a narrative. The music mirrors the visuals, shifting from mournful to otherworldly.

At one point, Gilman slips between paper and board. A door opens in the board, and he passes through, flooded in light. Later an upside-down image of Gilman appears on the screen via camera obscura, as if he’s passed through a portal. The glass comes in via lenses, molten glass and the furnace itself.

Weeks earlier, Kirkpatrick explained the piece was about her father’s recent death.

Sharon Owens, who runs a glass studio in Lafayette, Ind., doesn’t know the artist’s intent but grasps the gist: “It was an absolutely beautiful performance. Kind of unearthly. Ephemeral. And I like the way it just faded out, like a dream.”

Kirkpatrick teaches at the Chrysler’s Glass Studio and the Governor’s School for the Arts. HannahKirkpatrick.com 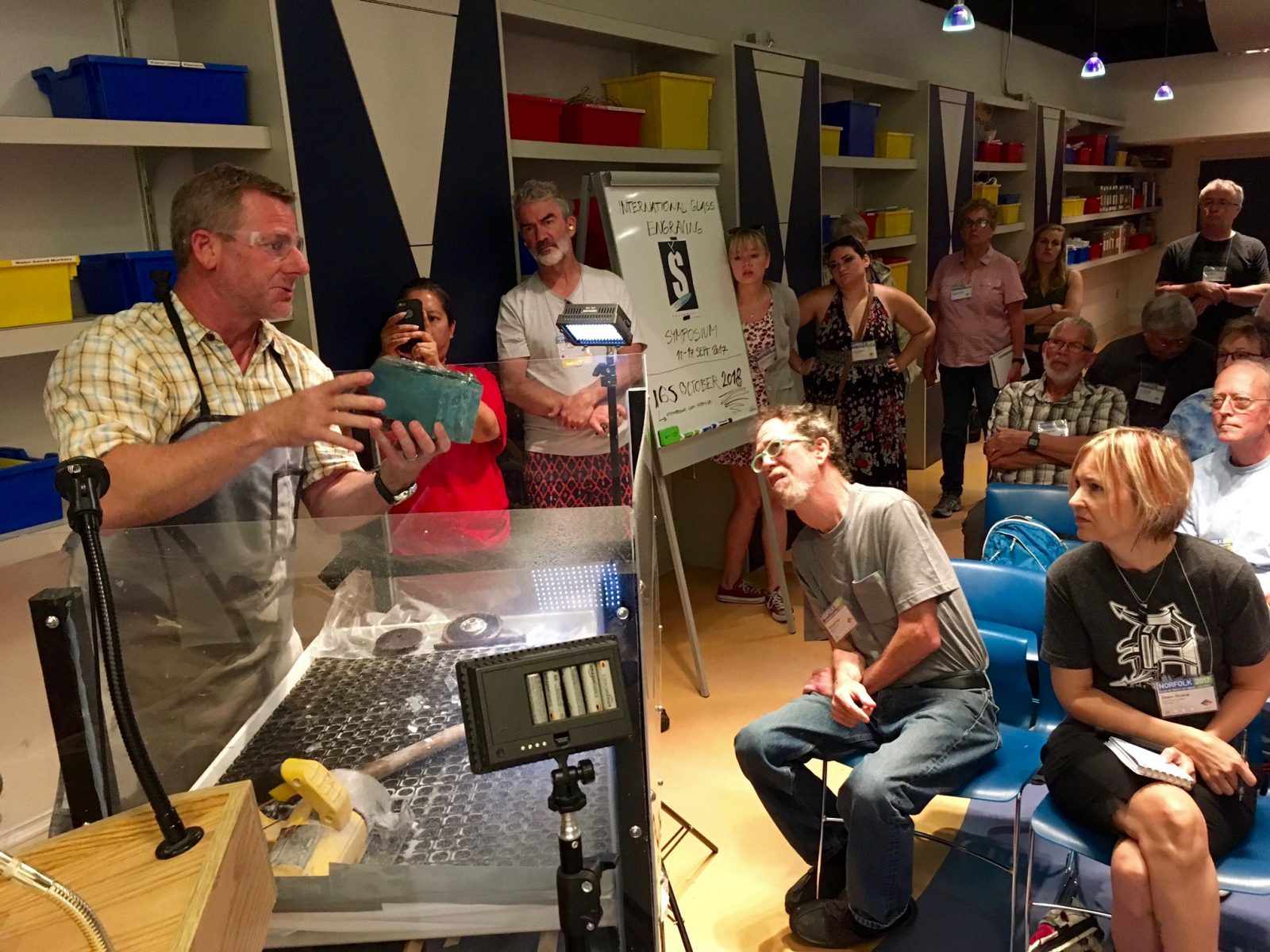 Matthew Fine, 53, who makes sculpture blending glass and granite, tells those in his morning session at the Chrysler that he casts himself back to his youth for inspiration.

“I was raised in Virginia Beach making sandcastles and surfing,” he explains. “The sand casting (of glass), to me, is a tribute to making sandcastles: Make no plan. Find what’s lying around. Start in. And if you don’t like it, kick it over and try again.”

Fine isn’t kidding. He gets his best results from being open and spontaneous.

When Colin McKinnon, co-chairman of the conference, introduces Fine, he notes his “unorthodox approach to getting in and being in the glass art realm.” He’s likely referencing how Fine has opened his own gallery, Okay Spark, so he can market his work at international art fairs—an atypical path.

McKinnon also could be thinking of Fine’s largely self-guided artistic journey into mixing stone and glass, and making up processes along the way.

Fine earned an MFA in sculpture from the University of Georgia in 1990, with a focus on stone. In 1992, he witnessed famed glass sculptor Bertil Vallien do a sand casting, with assistants toting ladles filled with molten glass to pour into the sand.

Two years later, Fine began experimenting with casting, and has designed his own effects. One is to chill the ladles with ice, creating bubbles in the glass as he pours the lava-like gel into a box filled with sand he has shaped into a mold.

It’s the kind of happy accident that comes from struggling with materials on his own. “I really just want to show up and react to the sand.”

Fine was recently included in a major group show at Habatat in Michigan, a top gallery for glass art. VisitFine.com