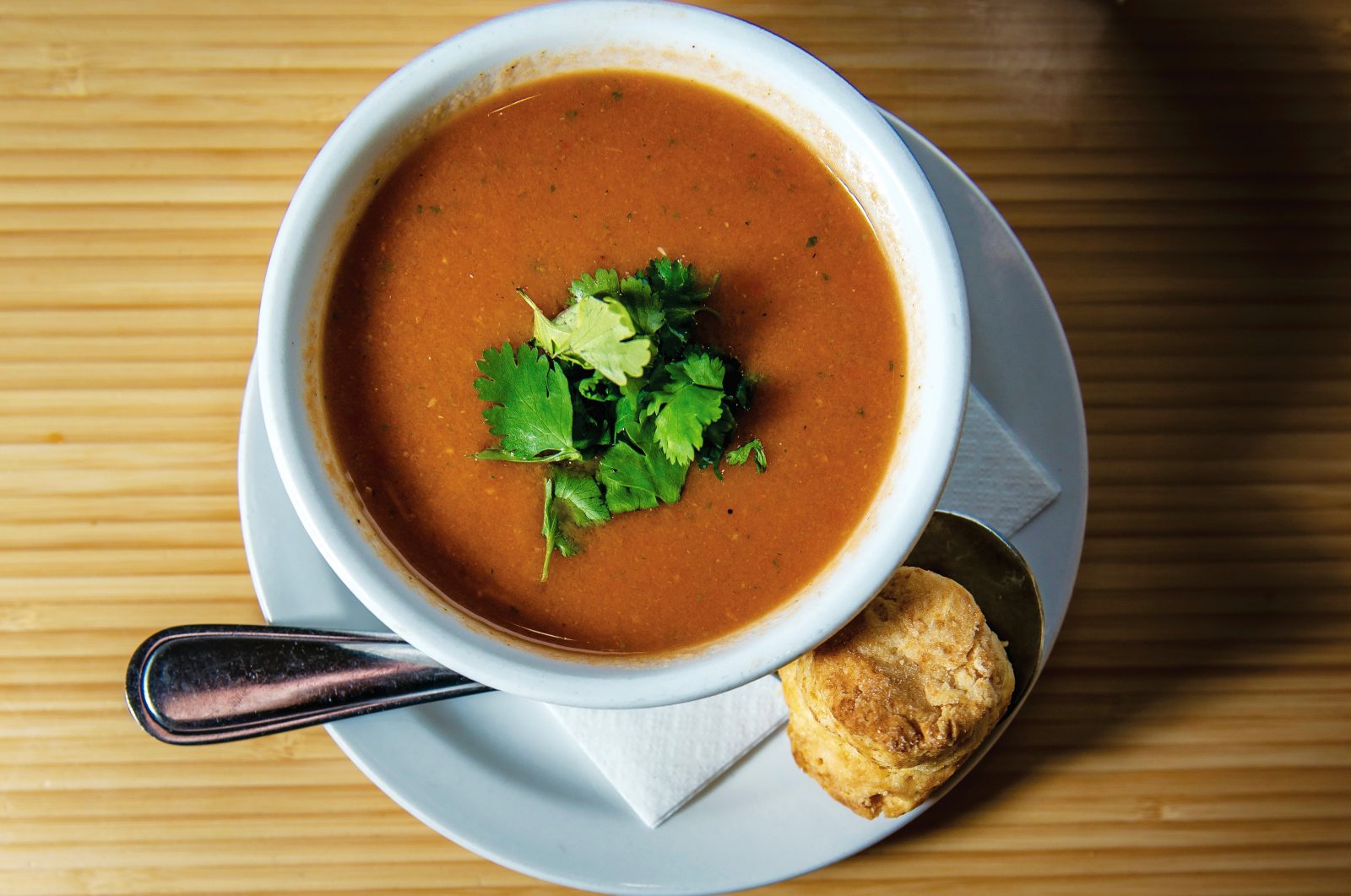 Gazpacho at The Stockpot. Photo by David Uhrin

When it comes to chilled soup, gazpacho is our go-to. We love you, borscht, but hot in winter is our preferred delivery method, and sorry vichyssoise, you pale in comparison. Vivid and vitamin-packed, gazpacho makes a complete refreshing meal on a sultry summer’s day. And while most folks think it’s synonymous with tomatoes and peppers, that wasn’t always so. Andalusians were concocting gazpachos of stale bread, garlic, olive oil and vinegar centuries before they could add such New World souvenirs. Today’s riffs, be they chunky, pulpy or pureed, boast all kinds of colorful fruit, veggies, seafood and more.

The Stockpot is famous for long-simmered bone broths, but as temps rise, gazpacho gets a menu slot at the ViBe original and its new Downtown Norfolk sib. First comes smooth, basil-blessed strawberry, replaced post-Pungo-picking-season with a summer gazpacho teeming with tomatoes, cucumbers, bell peppers and summer squash. Each location also runs its own daily specials (perhaps melon gazpacho) with Chef-Owner Anne Galante and crew stirred by gazpacho’s “…balance of sweet, spicy, cold and acidity.” StockpotSoups.com

The Atlantic on Pacific

Gazing at icy beds with luscious local oysters resting upon them at this raw bar and eatery cools us off. So do Chef-Owner Dave Brue’s gazpachos, some with shrimp, others with crab. But his favorite is a grape-based green gazpacho with cucumbers, Marcona almonds, champagne vinegar and, in a nod to the classic, sourdough bread. TheAtlanticVB.com

As local produce rolls in, Neil Griggs feeds those European cukes, jalapenos, carrots, sweet red peppers and celery into a whirring #12 grinder. “Like you’d use for making hamburgers,” says the chef-owner of this Williamsburg restaurant fashioned out of repurposed wood from his grandparents’ barn. He adds V-8, Texas Pete and Worcestershire sauce, sometimes tossing in golden cherry tomatoes for an eye-popping yellow gazpacho. But never onions. “It’s better the second day,” he explains. “Onions would make it sour.” CochonOn2nd.com

Tough to call what’s cooler, Leaping Lizard’s gonzo gazpachos or the fact that its chef, Todd Steinhardt, was Don Henley’s personal chef. At this whimsical gourmet café that’s as fresh and breezy as a gazebo (with its own bakery!), he offers a garden variety and a smokier adobo packed with peppers. Both rock, and, too good to be confined to a bowl, the former doubles as a sauce under fried green tomatoes and fried soft shell crabs. Facebook.com/LeapingLizardCafe

Among Heather Fraley’s irresistible soups du jour, thick, tomatoey vegan gazpacho demonstrates that chilled soup can be as hearty as anything hot. Deploying cumin as a secret ingredient, it’s served with hunky bread—rustic multigrain or French—and warms our hearts like the summer sun. Heck, so does pretty much everything else at this tiny Ghent eatery, its inclusivity evidenced by signs spanning “Lettuce Turnip the Beet” to “BACON + anything = mmm.” TheTenTop.com