A New Space for Sports at the Virginia Beach Sports Center

“This is the kind of game-changing project Virginia Beach is known for,” Virginia Beach Mayor Bobby Dyer told the socially distanced crowd gathered in the fall sunshine outside the entrance to the Virginia Beach Sports Center for a grand opening celebration on a Oct. 1, “and I think you’ll all agree that it couldn’t have come at a better time.”

The mayor noted that the facility located across the street from the Virginia Beach Convention Center and now the largest indoor sports complex on the East Coast, already has more than 50 events scheduled in the coming year and would “expand and diversify our economy” and generate “major league play that creates year-round activity.”

After a ceremonial passing of the runner’s baton in place of the traditional ribbon-cutting, key project players, members of the media and local community were welcomed for tours of the 285,000-square-foot building, which includes 12 basketball courts that double as 24 volleyball courts, a 200-meter hydraulically banked track and seating for up to 5,000 spectators. 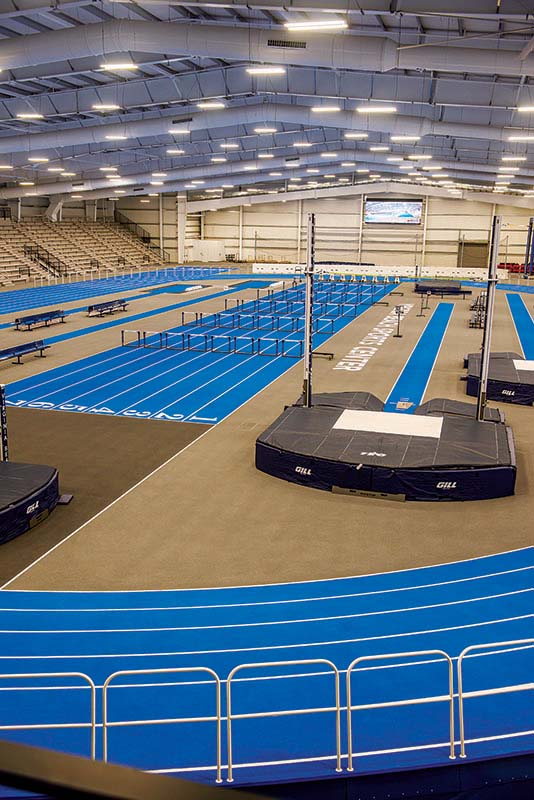 Flexible play space with netting and hoops suspended entirely from the ceiling and adjustable dividers allow for a variety of configurations adaptable to various sports at the touch of a button, and traditional scoreboards have been replaced by giant TV screens with easy-to-change digital displays. There is a total of 195,000 square feet of programmable space to accommodate a variety of events using court space and including the option to to lay the track flat. Some other features include:

The $68 million state-of-the-art facility, designed by Clark Nexsen and Hanbury and built by MEB General Contractors, will be operated by Eastern Sports Management and host a wide variety of adult and youth sports, league play, high school and college competitions and national tournaments.