A Taste of Suffolk History at the Truitt House

Magnificent neoclassical home, once in a state of disrepair, has been lovingly transformed into a one-of-a-kind B&B by its proprietor and French-trained chef 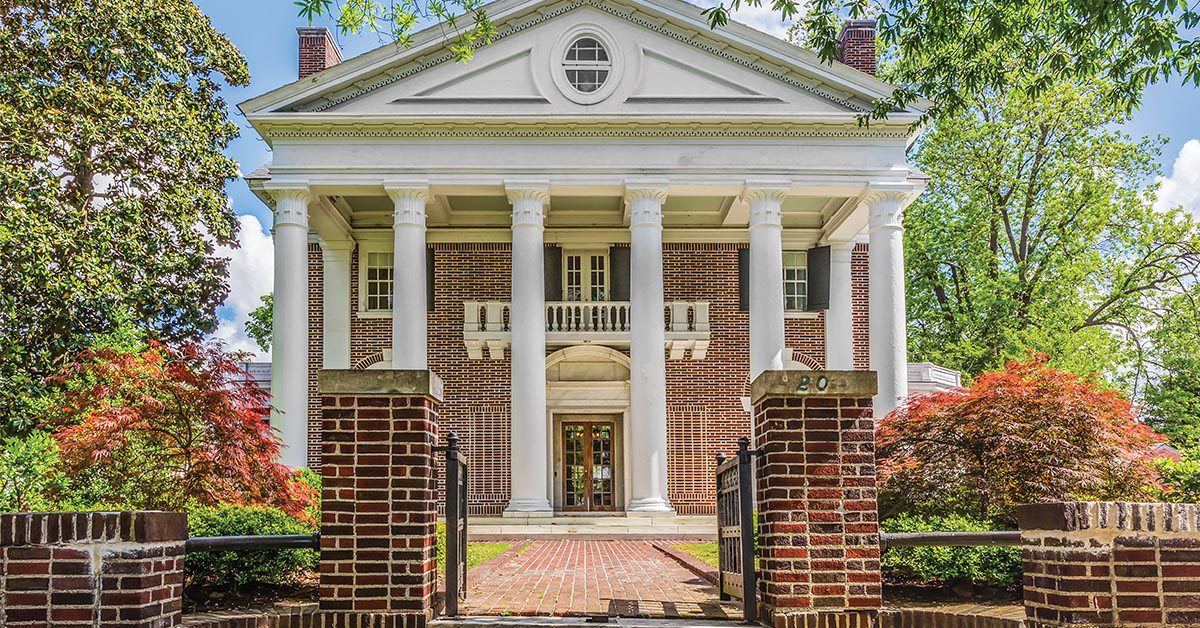 Violet-eyed film icon Elizabeth Taylor knew how to make an entrance—on screen and off. In the grand foyer of the Truitt House in downtown Suffolk, I can’t help but imagine an impossibly bejeweled Taylor elegantly descending the shallow steps of the home’s exquisite floating staircase. She may have done just that when she visited the mansion along with her sixth husband, would-be U.S. Senator John Warner.

No doubt many distinguished guests have graced the building’s stately neoclassical portico—defined by six massive white pillars—since it was originally completed in 1909 by lumber tycoon George W. Truitt. Truitt reportedly positioned the house so that it would be the first thing visible to people disembarking at Suffolk’s bustling passenger train station, so perhaps he had a flair for the dramatic entrance himself.

Luckily, these days you needn’t be Hollywood royalty nor wealthy magnate to enjoy the Truitt House, which has been transformed into a one-of-a-kind bed-and-breakfast as spectacular as it is warm and welcoming. Its proprietor and patron saint, Ruth Baker, not only calls the house home—she occupies the third floor that was once a ballroom—she is its sole keeper, resident chef and delightfully loquacious host.

“This is where it gets real,” Baker tells me in the middle of the foodie’s dream that is her tricked-out kitchen on the first floor. A graduate of the French Culinary Institute in New York City, Baker prepares gourmet meals here for her guests, occasionally her fun-loving French neighbors and probably anyone who asks nicely enough. She seems like the sort of person who would whip up a perfect beef bourguignon just because someone wondered aloud how to spell it. But this kitchen was far from dreamy when she first laid eyes on it seven years ago. 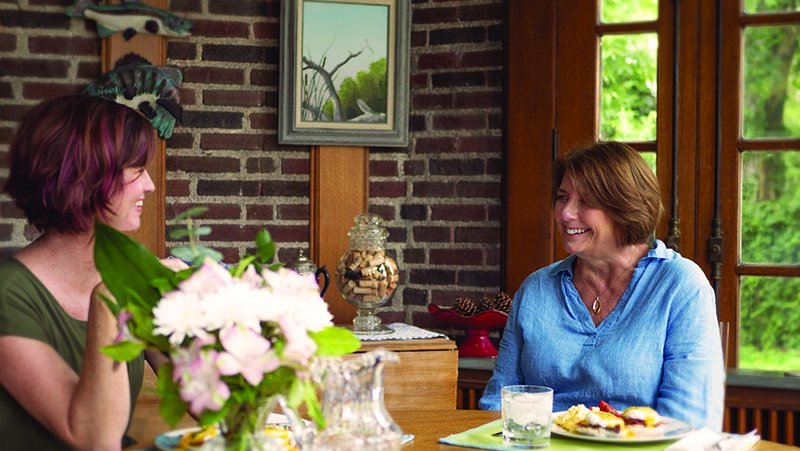 “He thinks the house found me,” Baker says of architect Seth Ballard of Ballard+Mensua Architecture. He was instrumental in restoring the grandeur of this hidden gem, just off Main Street in a town whose historic charm and peanut fame bely a growing culinary and cultural scene. If it weren’t for a virtual tour that mysteriously popped up on her computer and Ballard’s declaration that he’d never seen the home’s equal, Baker might not have made the leap of faith—she would probably call it a temporary lapse of sanity—that led her to purchase the delipidated 8,500-square-foot home for $440,000 in 2012.

She made a promise to her late husband before he passed away that she would pursue her dream of earning a culinary degree, and she did. Owning a bed-and-breakfast was next up on the Bucket List. She had four appointments scheduled to view properties in Lynchburg, near her hometown of Appomattox, when fate called her to an auction in Suffolk. The next thing she knew, she was the owner of a beautiful behemoth with distinctive echoes of Jefferson’s Monticello. Then came the list of repairs and replacements that soon proved longer than War and Peace.

Fast forward many nights without electricity, at least one ghostly crashing chandelier and a revolving door of contractors who overpromised and underdelivered. She finally opened to the public in fall 2019. And then…COVID. When people asked her, and they often did, why she took on such an all-consuming and expensive project, her go-to response was, “I must be bat-shit crazy.” The phrase became a mantra of sorts, so much so that a friend gifted her with a framed plaque commemorating it. Faith and a sense of humor, she says, got her through. The stunning results speak to her tenacity as well as the talent and vision of Ballard, who also convinced her to establish a 501c3 nonprofit for the building’s long-term upkeep.

While the coronavirus pandemic has presented unprecedented challenges for travelers and the hospitality industry alike, one could hardly ask for an enchanting getaway more friendly to social distancing—or friendly in general—than the Truitt House. “Spacious” is an understatement for a home with nine fireplaces. With accommodations for a maximum of 10 overnight guests in four bedrooms separated by a large landing on the second floor, you are welcome to luxuriate in comfort as far from others as suits your fancy.

All four bedrooms have stunningly renovated private bathrooms, bedecked in Italian marble—two in a cool, calming jade tone and two in classic black and white—accented by a pattern inspired by a quilt belonging to Baker’s grandmother. New Tiffany light fixtures with oblong crystals perfectly mimic the shape of those on the original bedroom overheads. Rooms prices range from $140 to $250 per night for the king suite with adjoining sitting room, handsomely appointed with overstuffed leather sofa and chairs and access to a wide, shallow balcony overlooking the home’s solid marble front porch.

The marble trim that surrounds the home’s base is one of its many unique exterior and structural features. Large steel supporting beams in the basement and elsewhere are virtually unheard-of in private homes of the era. The exterior walls are four bricks thick—or 16 inches—and had to be painstakingly repointed. Another marble porch outside the back door leads to the home’s original carriage house, still in a state of disrepair, but which Baker envisions someday being transformed into a restaurant.

The overnight guest price includes a cooked-to-order breakfast from the chef herself, a yogurt parfait with house-made granola if you prefer a lighter start, or whatever satisfies your dietary needs or heart’s desire. But believe me when I say you should accept Baker’s offer, as my husband I did on our recent visit, of traditionally prepared Eggs Benedict—sinfully silky Hollandaise drizzled over expertly poached Happy Eggs, Wright Bacon and English muffins served with creamy parmesan polenta.

Chilled water, coffee and other beverages are available 24/7 in the butler’s pantry fit for a king. One of the most charming rooms in the house, it has been beautifully updated with custom cabinetry and countertops made from 200+-year-old Blackwater sinker cypress, while captivating original details like a tiny double-door plate warmer built into the antique radiator harken back to meals prepared here over the last century. The warm wood and sun-lit Eastern exposure of the adjoining breakfast room beckon visitors for coffee and conversation any hour of the day.

The main area of the first floor features a huge formal dining room and living room, joined by the foyer to form an even bigger entertainment space that opens on either side to two terraces that flank the building. Fourteen-foot ceilings and Palladian windows large enough to walk through—or dance a conga line through as Baker recalls happened at a certain New Year’s Eve party—bathe the rooms in natural light and give the entire space an open, modern feeling. In the living room is a small musician’s mezzanine accessible by a tiny, winding staircase, from which performers once would have entertained party guests.

Perhaps the most fascinating room in the house is the octagonal study, aka library or “Decoy Room,” as Baker has dubbed it in honor of a single antique wooden duck decoy displayed there and given to her by well-known Eastern Shore collector Tommy O’Connor. The room’s floor, trim and mantle are crafted from incredibly rare curly pine, in this case thought to be sourced from a single tree and distinguished by its psychedelic burled pattern. An original oil painting permanently mounted above the fireplace, Art Nouveau light fixture, rich emerald green walls and four sets of French doors complete the ambience.

The study, like the rest of the home, is filled with an eclectic mix of furnishings, décor and conversation pieces. Inspired by Benjamin Moore’s Williamsburg Paint Color Collection, the interior walls and, in some cases, the ceilings have been given a colorful makeover from the beige-on-beige bland Baker inherited. Now there are brilliant golds, deep corals, comforting blues and various shades of Mr. Truitt’s favorite, green. She recalls many a late night perched on paint scaffolding with the help of friends who shared her wonder at seeing the space come to life, including decorator Jerry Freeman, General Manager of Artéé Fabrics, who provided expertise on the overall interior design. 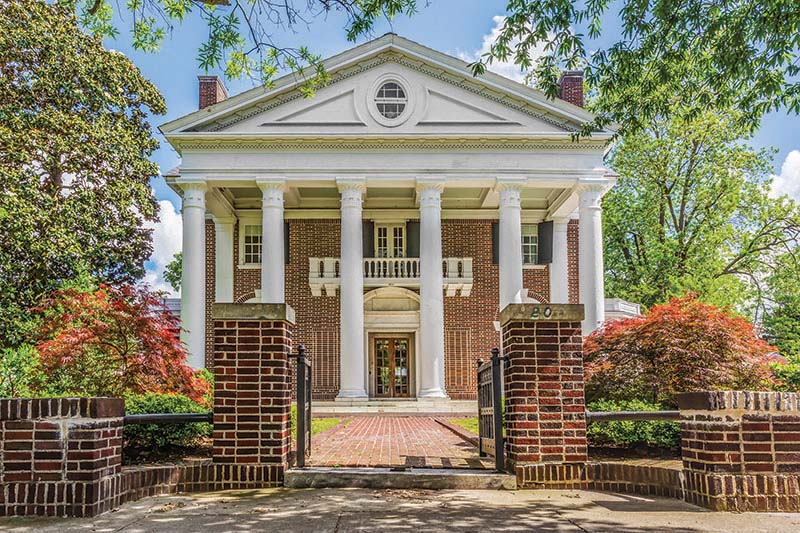 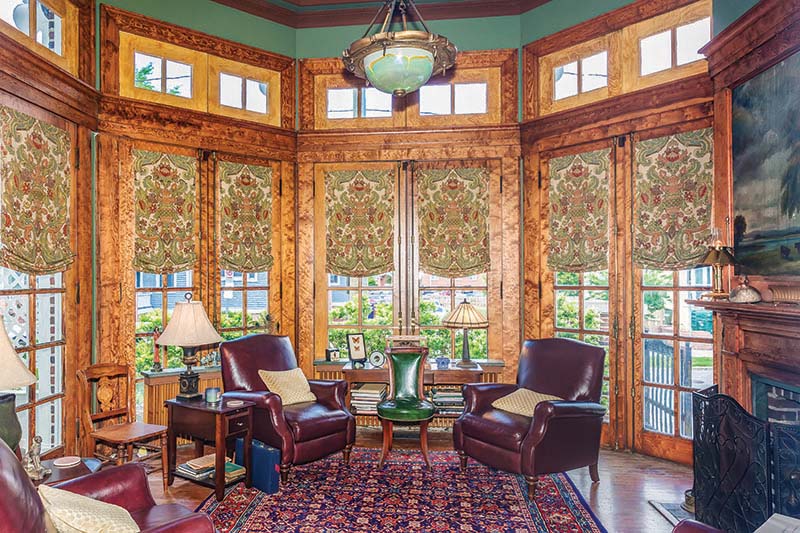 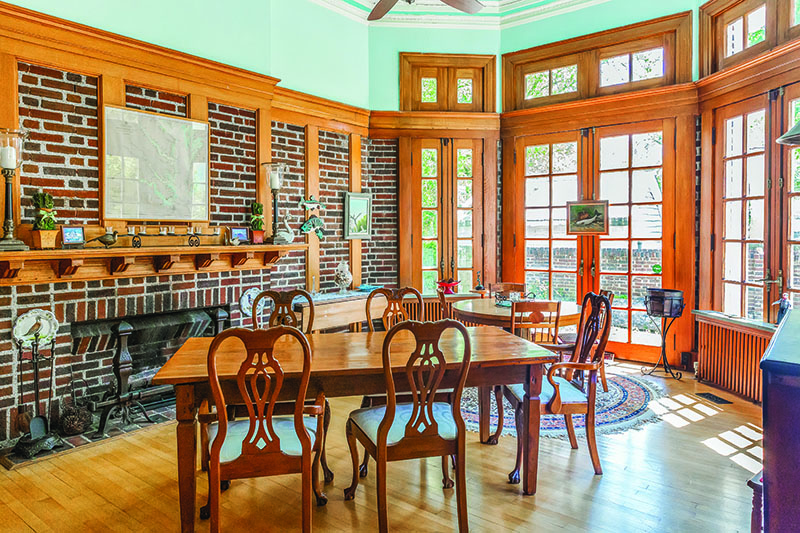 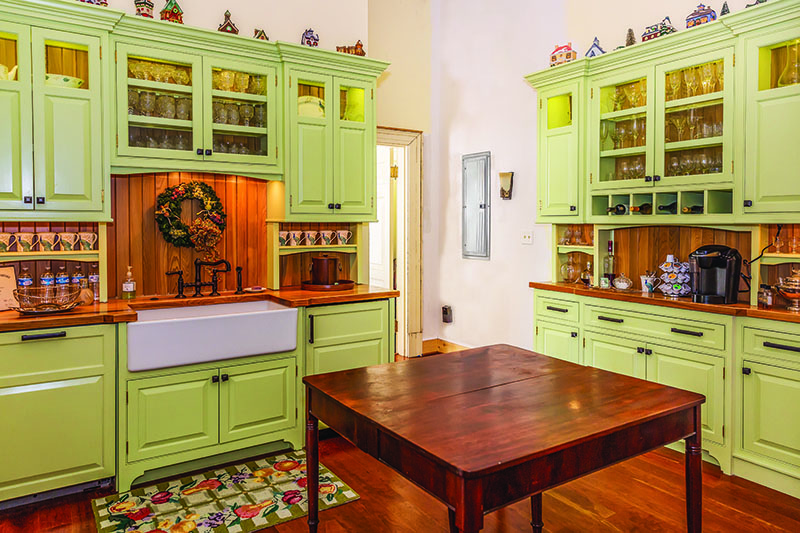 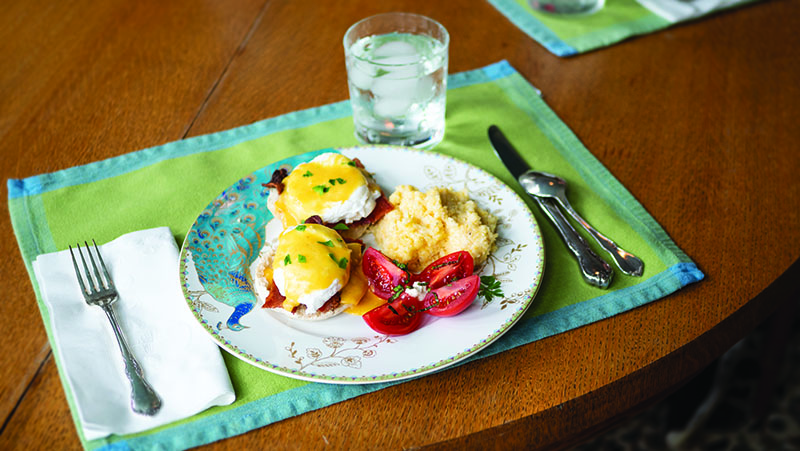 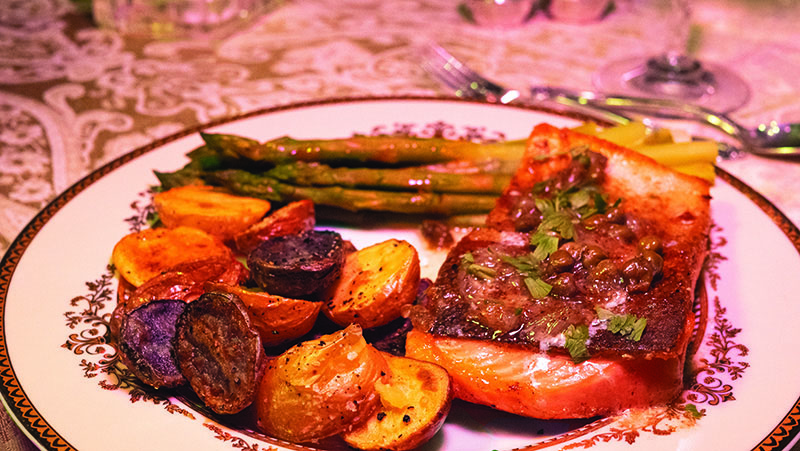 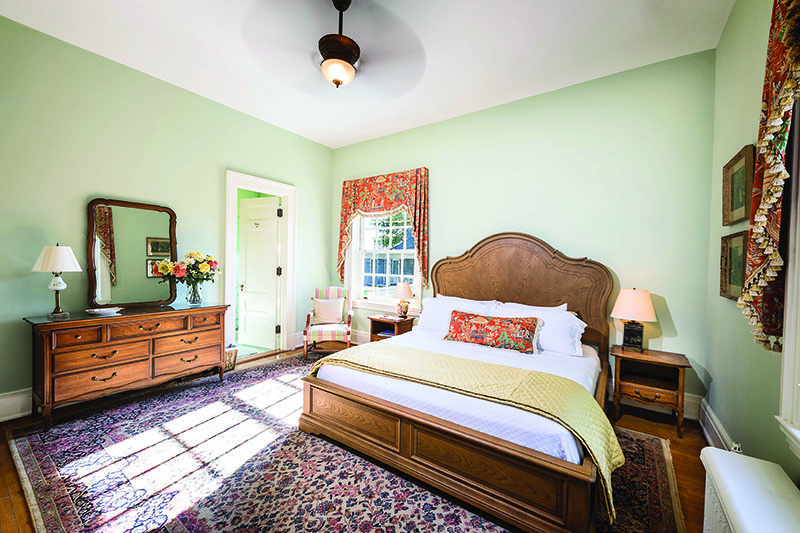 There’s plenty to explore within walking distance of the Truitt House’s location caddy-corner to the Suffolk-Nansemond Historical Society. Don’t miss The Suffolk Center for Cultural Arts, The Suffolk Seaboard Station Railroad Museum, The Riddick’s Folly House Museum and historic Cedar Hill Cemetery. Check out Uncork’d, a delightful nearby wine shop, or head over two blocks to Nansemond Brewing Station to get your IPA or oatmeal stout fix. If outdoor adventures are your thing, plan a kayak route or hike through nearby Great Dismal Swamp Wildlife Refuge.

If you’re looking to eat out, and you should, Harper’s Table, Sushi Aka and The General Public are just a few of Baker’s recommendations. You can learn more about these and other Downtown Suffolk eateries in Coastal Virginia Magazine contributor Marisa Marsey’s story in the November-December issue. At the Truitt House, however, eating in is just as tasty a proposition, if not more so. Chef Baker will design a menu to your liking, priced accordingly, lovingly prepared and freshly served for you and your fellow guests.

When my husband and I visited, she was kind enough to treat us to a fabulous four-course feast that began with an amuse-bouche of tomato and nectarine with goat cheese and balsamic reduction and continued with a classic Caesar salad with anchovies that has absolutely ruined me forever on substandard restaurant versions. The main event was a fish dish called Filet de Truitte à La Grenobloise or Sautéed Trout, Grenoble Style, perfectly crisped in brown butter and singing a diva-worthy citrus high note of lemon and capers. She topped it all off with a Vanilla-Brandied Cherry Ice Cream Bomb with a crust made from cocoa, ground pistachios and graham crackers. The bomb indeed.

Make your own dramatic entrance at the Truitt House this fall and beyond—and be sure to bring your appetite. The Truitt House is located at 204 Bank Street in Suffolk. Book a stay, request a gourmet meal or plan a special event by visiting TheTruittHouse.com.