At 100 Years, the Apollo of the South is Still Making Noise

It seems like an ordinary piece of wood, less than 2 feet in length. But look closer at this white plank, resting in a glass case, and you can see the faint signature of the legendary jazz bandleader Dizzy Gillespie, and perhaps hear the strains of a ghost trumpet blowing somewhere inside the historic Attucks Theatre.

If buildings could talk, this 624-seat landmark would say plenty. Originally constructed in 1919, the ornate Attucks is currently celebrating its 100th birthday with a new WHRO-TV documentary devoted to its history and a special "Attucks at 100" calendar of events. Artifacts like Dizzy's signed wood, a remnant of the theatre's former backstage area, are reminders of the Attucks' significance as a music venue, movie theater, playhouse and community gathering place. (And how's this for dream concerts? Dizzy Gillespie appeared here for a two-night stint in November 1946, and Newport News' own Ella Fitzgerald opened for him.)

"It was a segregated city then," says Rev. Joseph Green, former Norfolk city councilman and former vice-mayor. He says that the city—and especially Church Street—was losing its historic buildings. "I wanted to save one of them." It took $8.4 million to restore the Attucks, which had a dilapidated roof among other structural defects. "We raised half of that, and the city matched it dollar for dollar," he recalls. The 2004 restoration was a celebratory affair and a hopeful sign for Church Street's rebirth after years of area stagnation and decline. 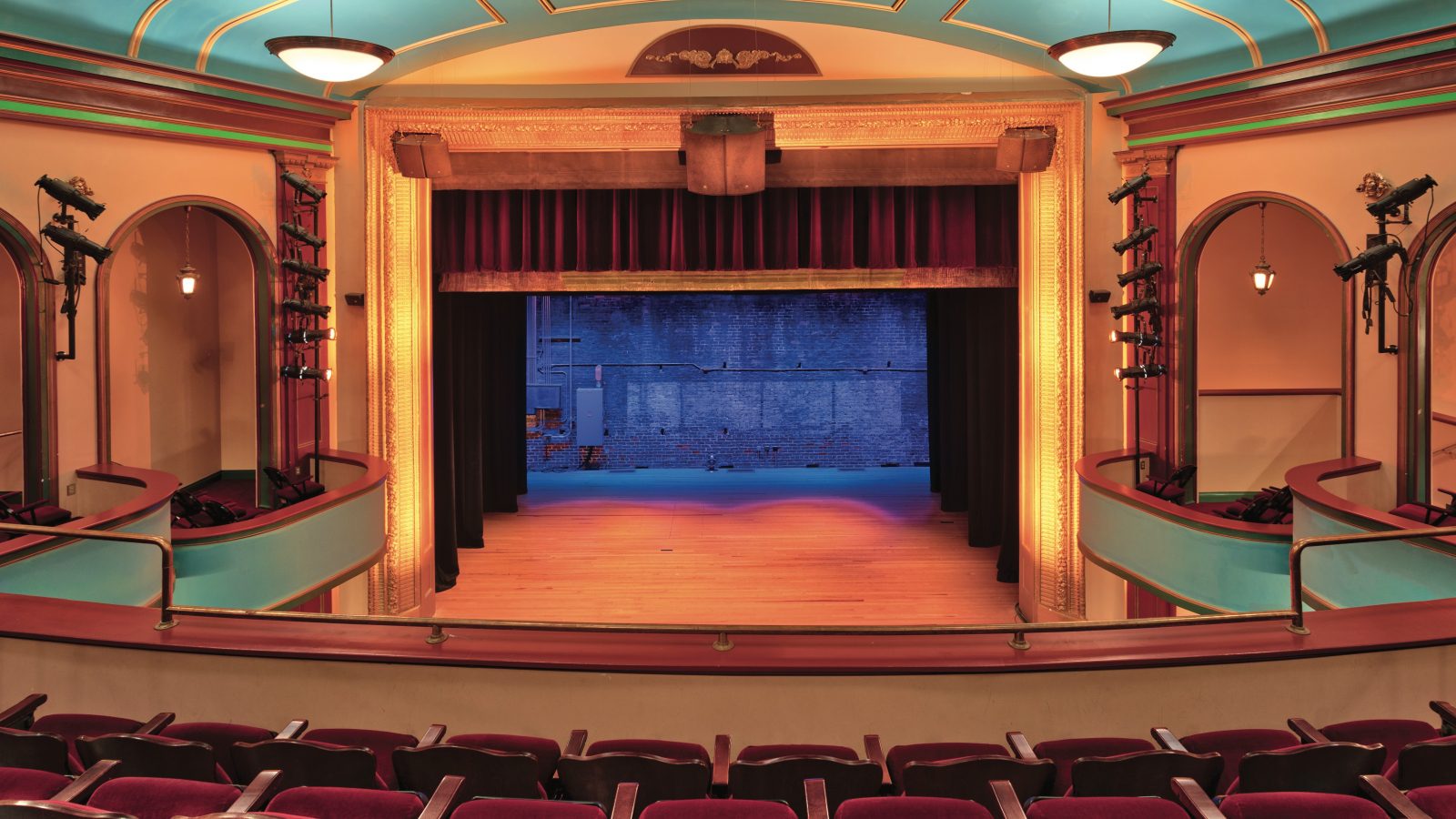 Constructed 100 years ago, the Attucks Theatre is an intimate concert hall as well as
a symbol of pride, says Rev. Joseph Green. "The Attucks had a black architect
[Harvey Johnson], black builders, the money was raised by black people and they
not only had a theater but a place that housed several black-owned businesses."

"It's the oldest remaining theater in the country that was financed, designed, constructed and operated by African Americans," says Denise Christian of the City of Norfolk's SevenVenues, which now oversees the theater. Christian knows this place better than anyone, having worked on reviving the theater back in 1993 as a graduate student and serving as project manager for the renovation.

"It was named in honor of Crispus Attucks, the first person to die in the American Revolutionary War, and was a brainchild of a group of Norfolk and Portsmouth businessmen who called themselves the Twin Cities Amusement Corporation. It was their idea to design a theater in the heart of the African-American community that served the cultural needs of that community." 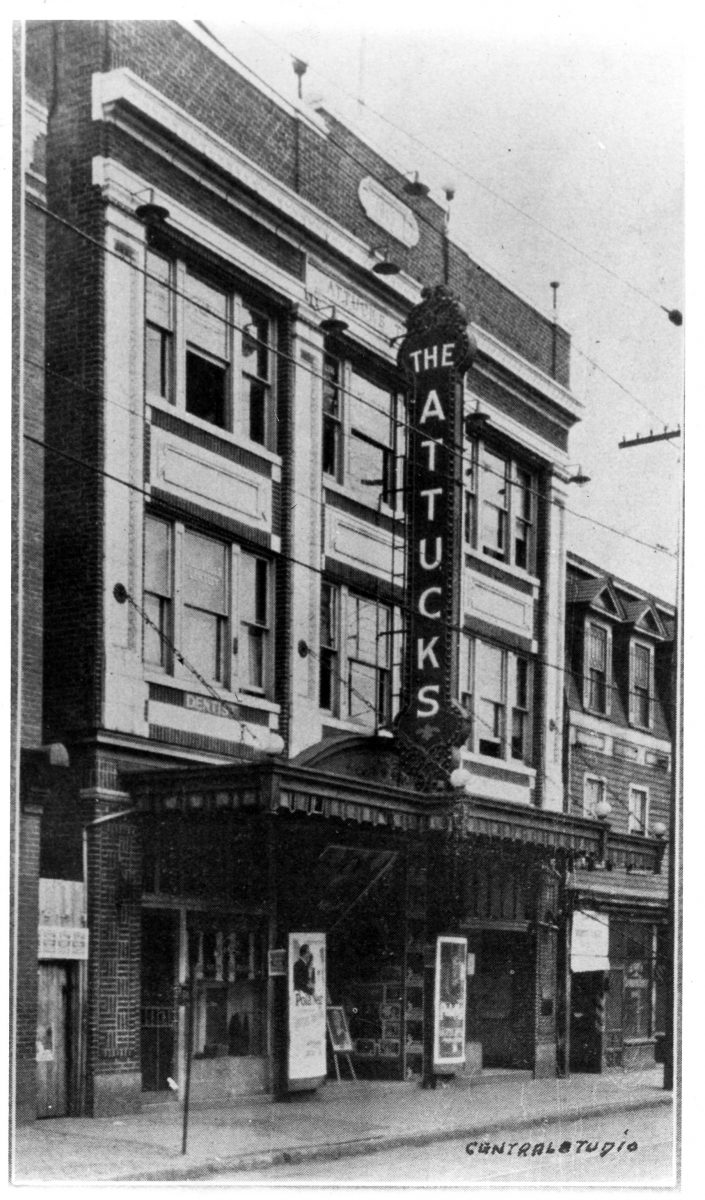 "It was used for a variety of purposes," says Denise Christian of SevenVenues.
"Live traveling shows that would come from New York, performers of the day,
high school graduations at Booker T. Washington, it was well utilized by the
community." 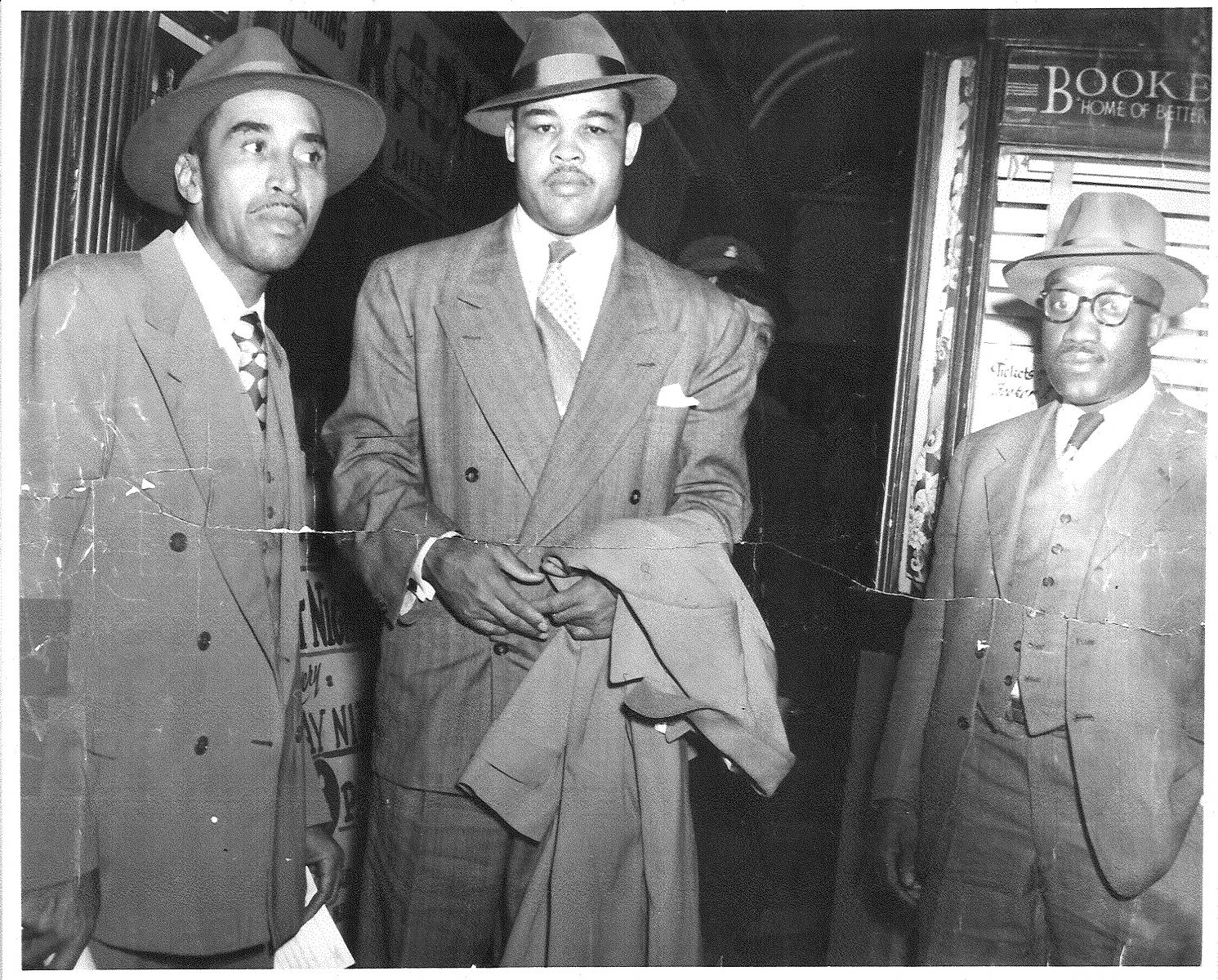 The Attucks Theatre attracted African-American celebrities both onstage and off.
Boxer Joe Louis (middle), here with Church Street shop owner Vincent McAllister
(left), attended a show at the Booker T in the late 1940s. The photo is courtesy of
Kay Williams, McAllister's daughter.

Church Street was thriving then, with neighboring businesses, retail stores and the Plaza Hotel, which housed many of the stars that graced the theater over the years—from Duke Ellington to Sam Cooke.

The Norfolk Ledger-Dispatch, in its Oct. 3, 1920 edition, reported that the Attucks opened with the Lafayette Players from New York and their musical comedy It Happened in Harlem. During the week of Jan. 3, 1921, according to The African American Theatre Directory, the Attucks featured Douglas Fairbanks in the adventure film His Majesty, the American; a comedy short titled Bone Dry Blues; a local African-American singing group called the Southland Singers; and a children's show by the Hambone Jones company. In one famous stop, jazz legend Sidney Bechet and blues singer Bessie Smith performed together at the Attucks in the 1923 musical How Come?

"It was used for a variety of purposes," says Christian. "Live traveling shows that would come from New York, performers of the day, high school graduations at Booker T. Washington, it was well utilized by the community." At first, the Attucks permitted whites to attend Friday midnight performances on an integrated basis, but this was stopped after the City of Norfolk passed an ordnance forbidding such practices in November 1922.

The name was changed to the Booker T in 1933, in honor of Booker T. Washington, and continued to bring to Norfolk the top African-American stars in the nation. "They would show movies at certain times but also have live performances, talent nights and so on," says Lisa Godley, the director of a new Attucks documentary called Apollo of the South, a 26-minute journey through the venue's rich past, that has aired numerous times on WHRO-TV. Musical legends such as Duke Ellington, Cab Calloway, Dinah Washington and Nat King Cole were just a few of the stars to grace the stage, Godley says. Her documentary points out that the theater also inspired homegrown talent.

"My mom took me down to Booker T Theater back when I was 11/12 years old," Norfolk-born singer Gary US Bonds told interviewer Robert von Bernewitz. "She took me to see Ivory Joe Hunter and Bull Moose Jackson … and with all the girls screaming and all the good-looking suits and clothes everywhere, [I said] 'I think I could do that.'"

Apollo of the South includes footage of R&B legend and Portsmouth native Ruth Brown performing at the restored Attucks in 2005. "I remember coming to this theater," she told the crowd about the time when, as a teenager, she snuck off to perform here. "The Booker T it was called then. And I came here one night trying to get in on the amateur hour, and my daddy walked right down that aisle. He said, ‘Alright come on,' and back then, they didn't wait to get home, he just took his belt off right there." 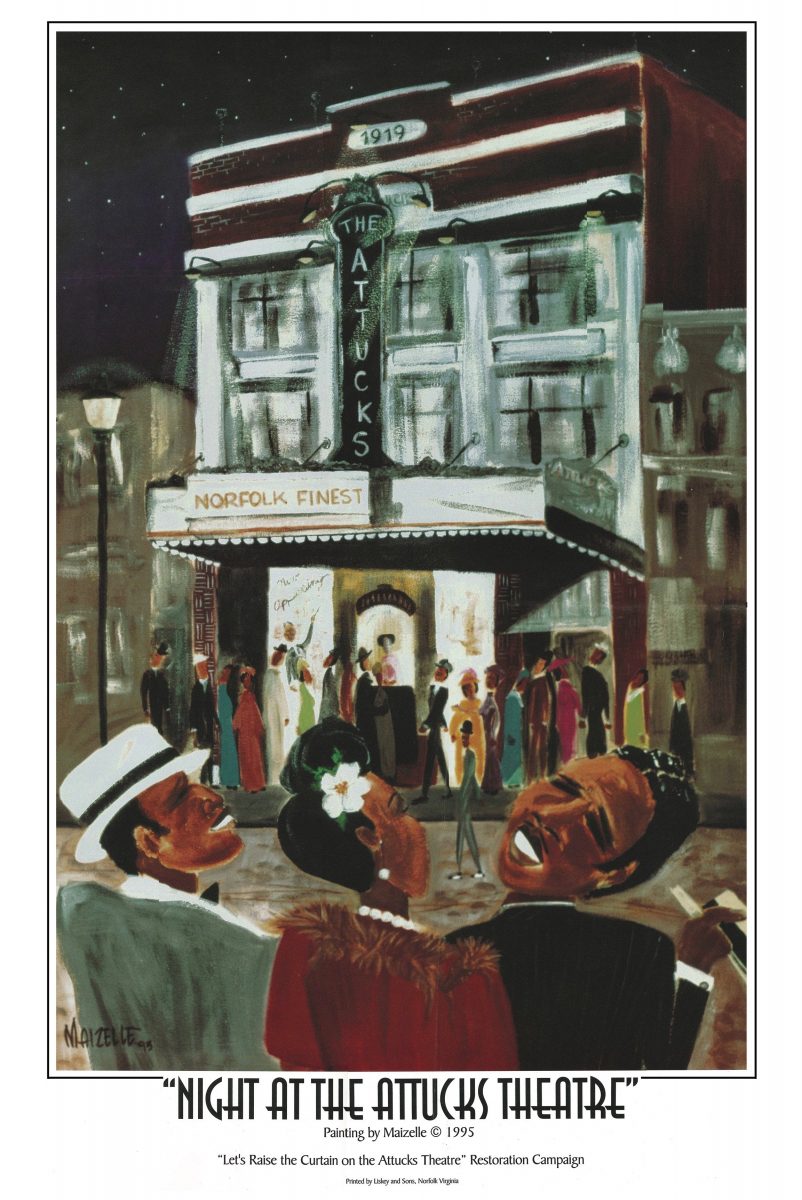 Despite its prominence, the Booker T closed in 1953 and the building ceased being a working theater. "It was a changing economy in the black community," Christian says, "because opportunities were beginning to open up for them to live in other areas. It was an economic decision to close it down."

From 1955 to 1991, the building was owned by the Stark & Legum store. The lobby became the clothier's retail showroom, and the theater converted into storage space. "They altered the lobby somewhat but didn't touch the theater, which is a good thing because if they had, it could not have been placed on the National Historic Register [in 1982]," Christian says. "If Stark & Legum hadn't been there," Green adds, "I don't know what would have happened to the building."

With the restoration, additional space was added to the back for two banquet rooms, a green room, mechanical room and loading dock. "Theaters today need more support space," Christian tells me while giving me a tour. "Back then, the dressing rooms were under the stage." 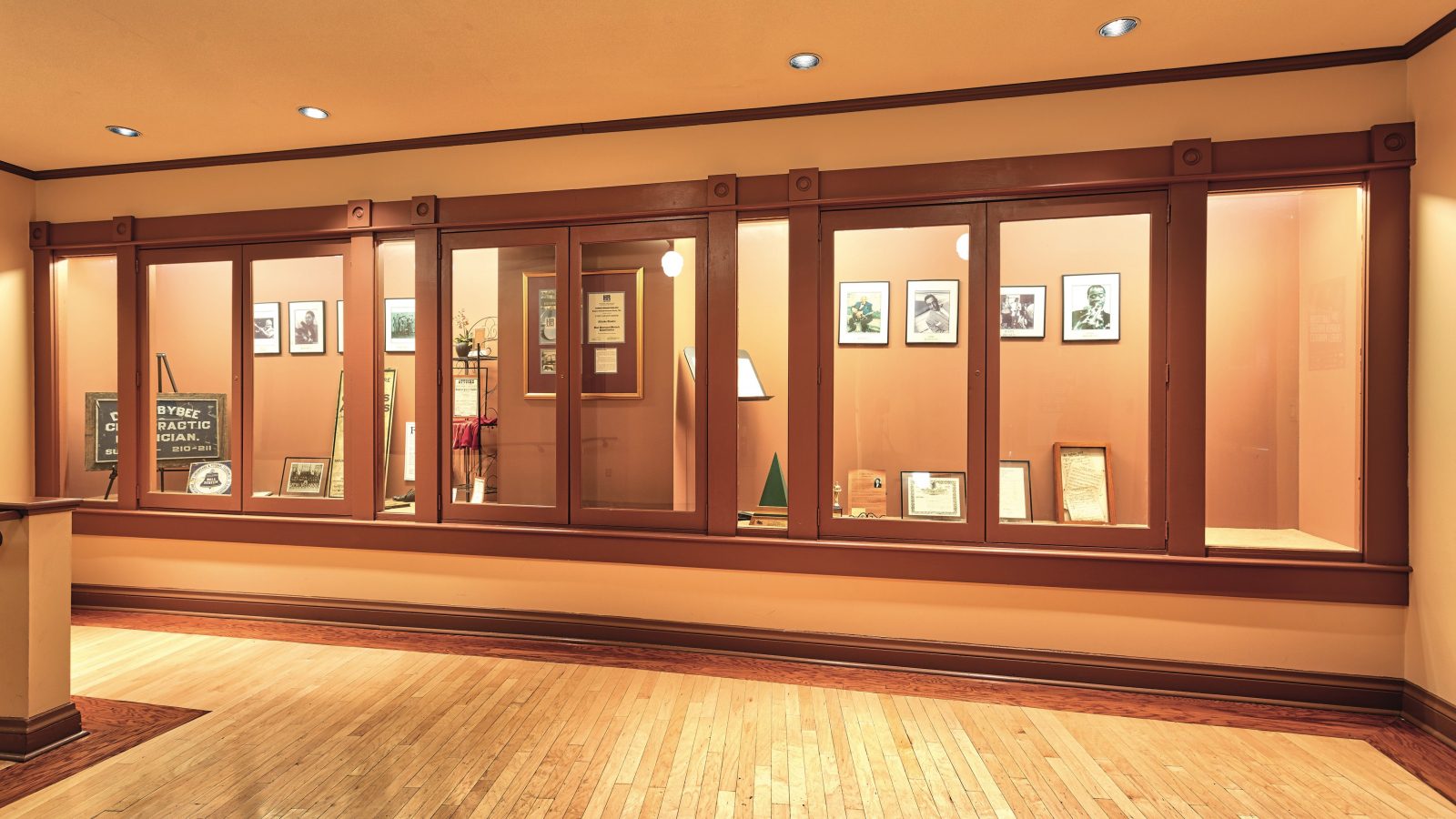 There is a special historical display on the second floor of the Attucks. That's where
you'll find vintage handbills, advertisements, a share of original Attucks Theatre stock
and a block of wood autographed by jazz legend Dizzy Gillespie.

Today's Attucks Theatre sits on its own little island, resting majestically amid a landscape that seems somewhat barren. The venue has had some well-documented trouble finding a steady audience since its renovation, and independent promoters have become wary—because of its size it can be difficult to bring in top-drawer talent and charge affordable ticket prices. "The great names today go to larger venues, that's all," states Green.

The theater hosted Norfolk State University's theater department and the play Choir Boy in February and “Saturday Night Live's” Leslie Jones appeared in April. The most popular regular attraction is a Virginia Arts Festival-sponsored jazz series that happens in one of the new banquet rooms. "They have regular jazz nights now," Godley says. "They have their own little club, not in the main theater, but in another room … they are trying different things."

"The Attucks has to find its sea legs for Church Street to be successful," says Green. To him, the theater remains a potent symbol of local African-American pride. "It had a black architect [Harvey Johnson], black builders, the money was raised by black people, and they not only had a theater but a place that housed several black-owned businesses. They call it the Apollo of the South but that's not right because the Attucks was first." He laughs. "The Apollo should really be called the Attucks of the North."

For more information, and for a current calendar of events, visit Sevenvenues.com/Venues/Detail/Attucks-Theatre. 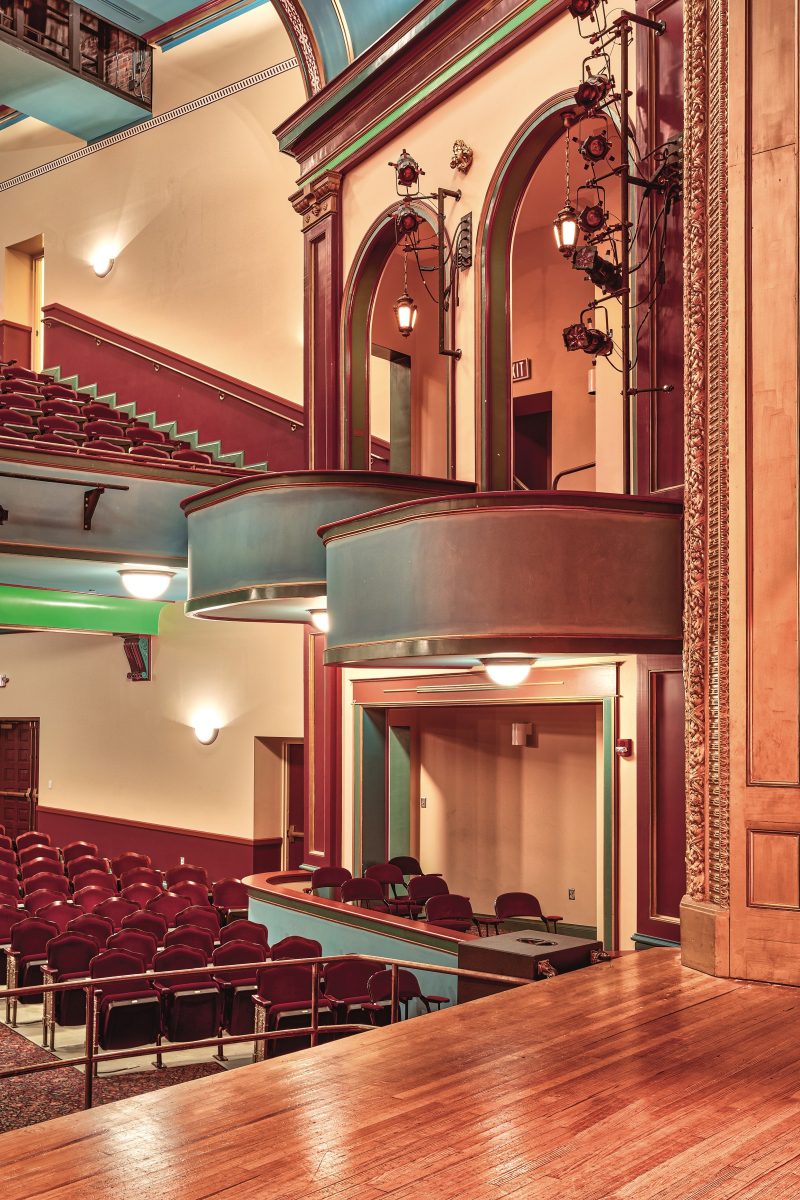 Ten at The T