Austin Saunders is a ghost.

No one in Virginia Beach’s surf community seems to have a good phone number for him. The website for his new business doesn’t have one, either. And the email address for his old surf shop appears to be a black hole.

“My real excuse is I just don’t want to talk to anybody,” Saunders says at his home in rural Chesapeake. “I just wanted to be left alone.”

Saunders, 33, eventually did return an email. And when we finally met, he didn’t bear the markings of a recluse. He’s friendly, relaxed and comfortable.

But Saunders has done the unexpected—and he’s tired of talking about it. The young man who became one of the most prominent custom surfboard shapers in Virginia Beach walked away from his craft. The decision rocked surfers who expected to be buying his boards for decades.

Fatherhood, though, led Saunders to the decision that chemicals used to make surfboards wouldn’t be the death of him. While surfers mourned, Saunders reinvented himself by fashioning custom-made pens—out of shell casings. And things are going swimmingly. 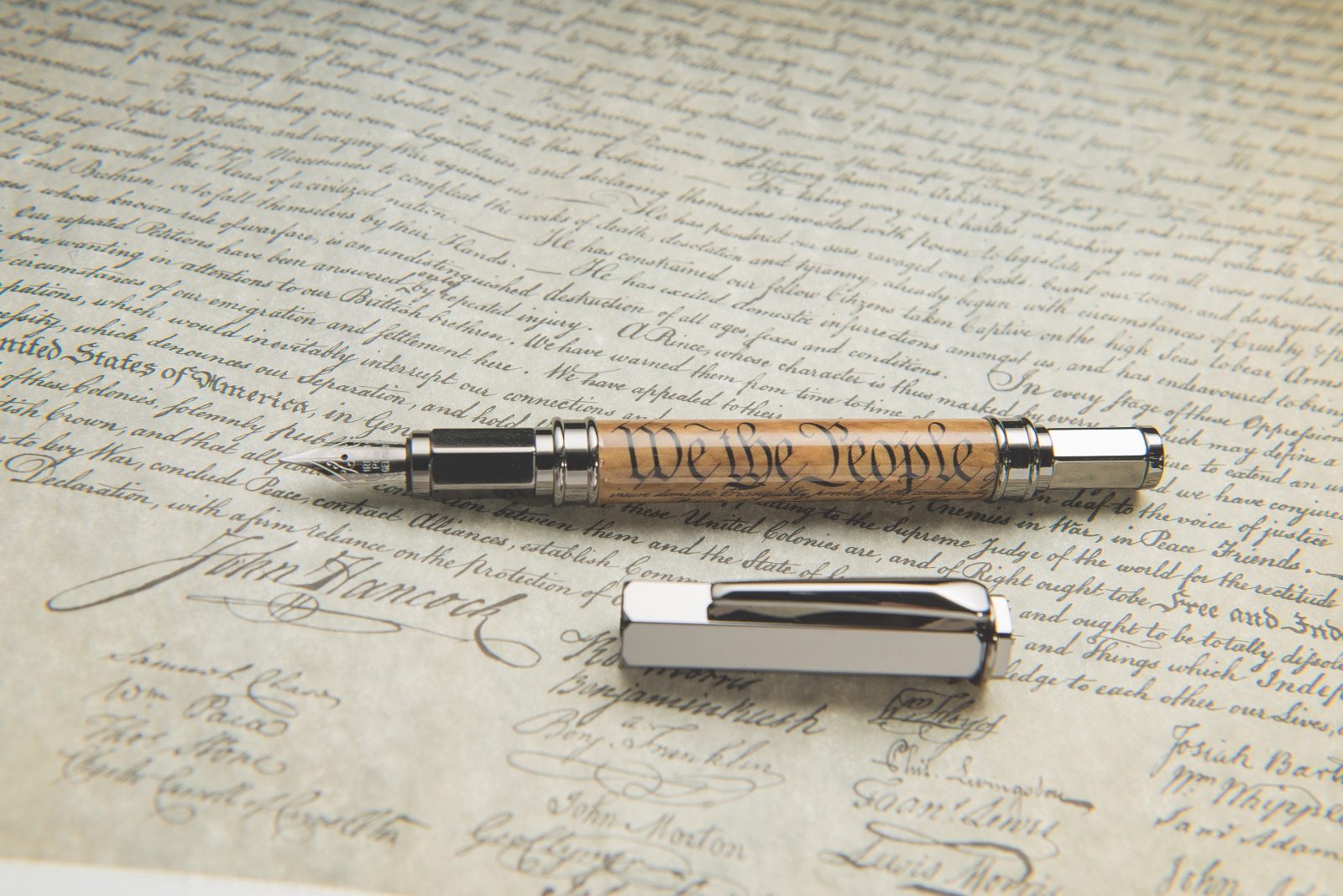 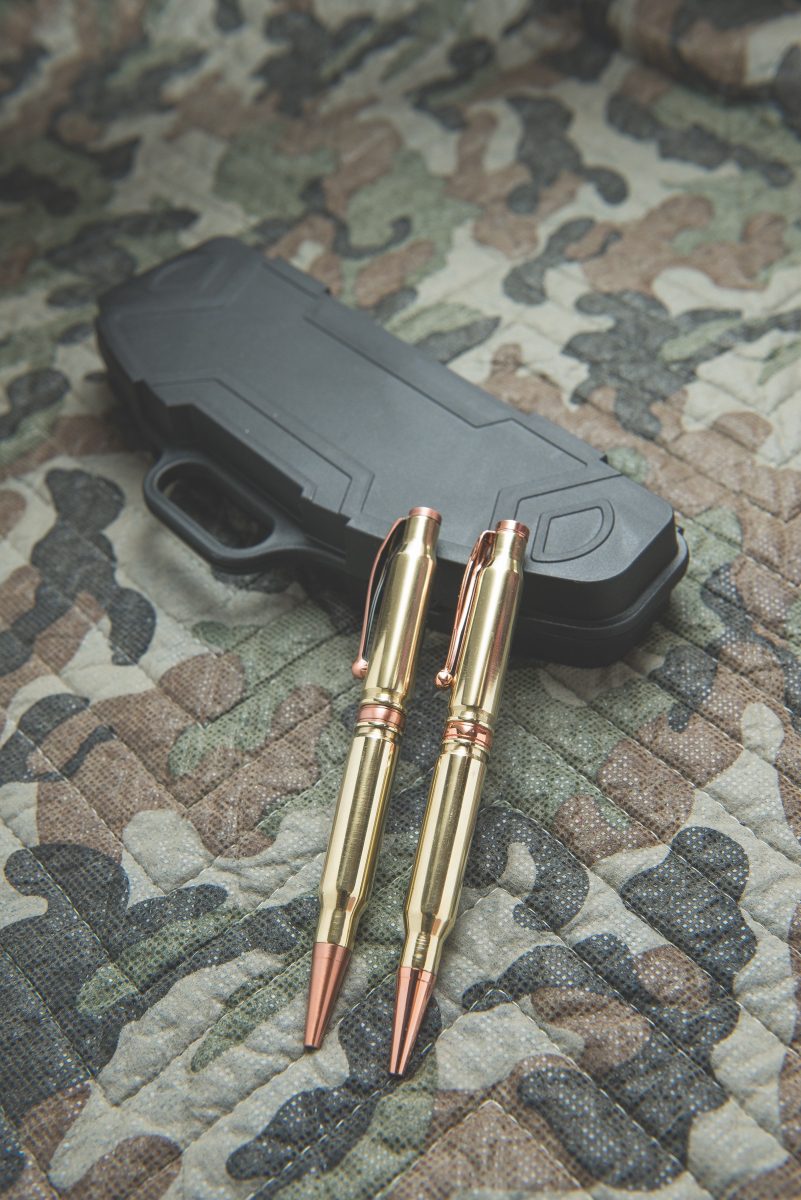 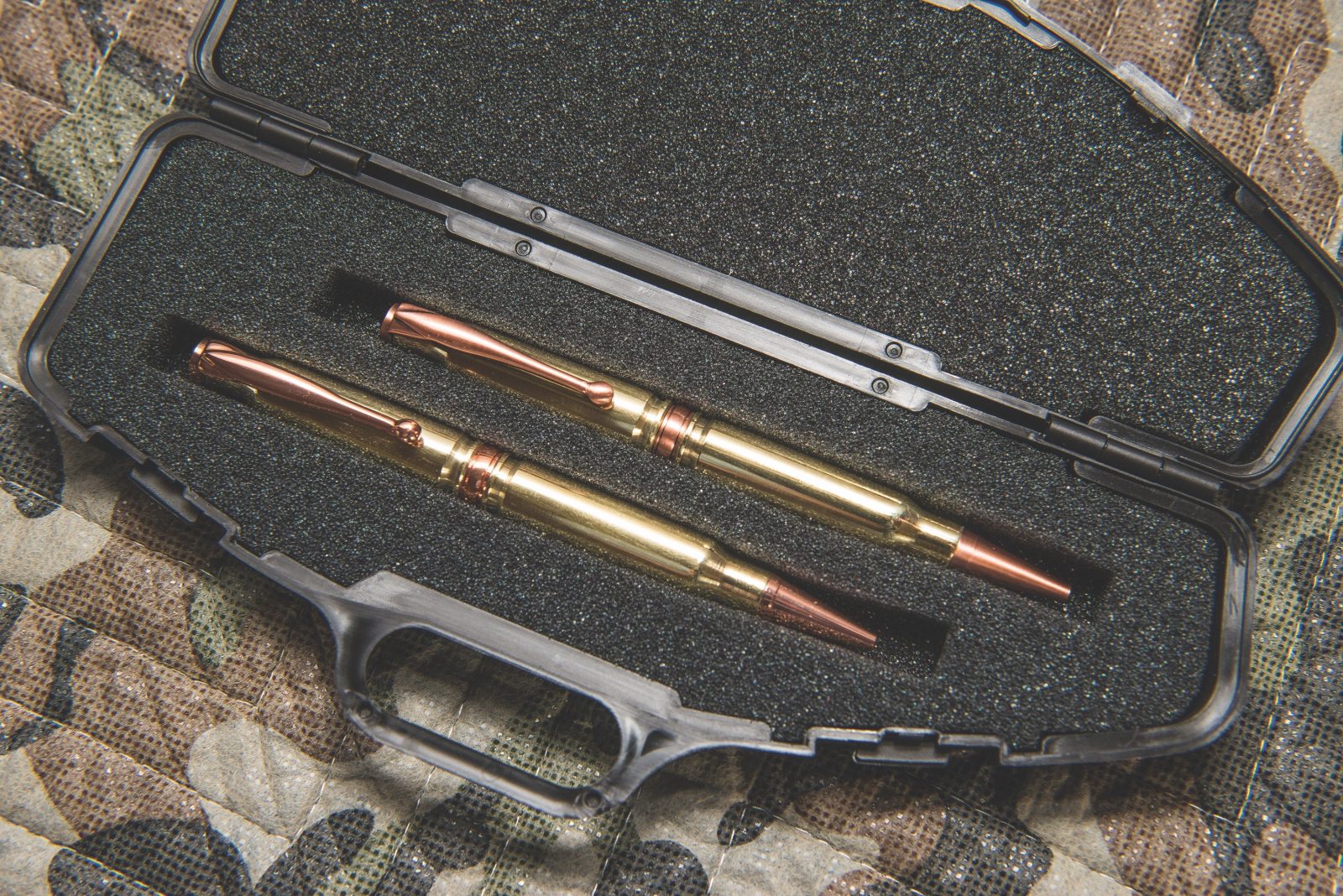 “It was really sad when he decided to walk away from it,” says Virginia Beach surfer Parker Neff, who has bought at least 12 Austin boards over the years and—by the way—does have Saunders’ phone number. “I joke with him every time I talk to him how hurt I am.”

Plenty of surfers still don’t know that Saunders stopped making boards. Because he left with no announcement—no goodbye—the word has trickled out to wave riders like a massive game of telephone. By the time it reached this correspondent, the story was that Saunders quit after sneezing orange resin out of his nose. Close, but not exactly.

In retrospect, it might have been easier to rip off the Band-Aid. “It was seriously like I was breaking up with girlfriends over and over and over,” Saunders says. “Super clingy girlfriends.”

His passion for building boards was once so magnetic that it held him captive in his shaping room on holidays, weekends and the middle of the night. Each board had to have its own style and personality. But the business side of it, and dismal profit margins, drained the pleasure from it.

Saunders devoted half his life to it. He was 32 when he quit. And he started at 16 in the garage of his parents’ home in the Strawbridge area, looking far too young to make boards that bold and beautiful. Grown men showed up to buy boards from Saunders and mistook him for his father, Troy.

A police cruiser pulled up to their home one day. We’re busted, Troy Saunders thought, figuring the visit had something to do with Austin using dangerous chemicals in the garage.

“Are you Austin Saunders?” the officer asked.

“Oh cool, will you make a board for me?”

And so it went.

Saunders bought a surfboard glassing company at 24. It was the only surfboard factory in Virginia Beach at the time. Then, he opened up a surf shop at the Oceanfront in 2009. He was 25. At his peak, Saunders made as many as 1,500 boards a year. He made mostly longboards—larger boards that aren’t as fast but work better in small waves—and fetched about $1,200 apiece.

Saunders had a loyal following even 650 miles north, in the coastal town of Kennebunk, Maine.

Ron Aromando owned a surf shop there. For years, he sold nothing but Saunders’ boards, carrying as many as 75 at a time. While surfing, Aromando would sometimes look around and see everyone riding Saunders’ boards.

“Austin was off the charts for his skill level,” Aromando says. “We were all bummed out when he switched over to pens.”

Saunders hadn’t spent much time worrying about the health effects of polyester resin, used to coat surfboards. One of the ingredients in the resin Saunders used, styrene, is “reasonably anticipated” to be a chemical that can cause cancer, according to The National Academies of Sciences, Engineering and Medicine.

But then his wife, Jamie, got pregnant. One night, while sitting in bed with her, Saunders began coughing. She could smell the resin coming from his lungs. It wasn’t the first time. Austin had worn a respirator all day while “glassing” surfboards—and this was hours later. But the chemical found a way into his lungs. And stayed there. And that scared him.

Then and there, he decided he was done. He did make two more boards, though—one for himself and one for his unborn son. The latter now hangs above the crib in his son Benjamin’s room.

“I’m not a person that lingers over a decision,” Saunders said. “I make a decision and go.”

The custom pens had already come into his life.

A cousin’s grandfather had died a couple years earlier, and funeral organizers did a 21-gun salute for him. Afterward, the cousin got to keep the spent shell casings, carrying one of them around on a key chain. She asked Saunders’ uncle, Joe, a man whose hands can do just about anything asked of them, if he could make something with the casings.

Joe made two pens. He showed them to Saunders first.  “And I was like, ‘This is awesome. I need you to show me how to make this,’” Saunders says.

He and Joe, who worked for Austin at his surf shop, made a pair for one of his sisters and her husband. Then, he started selling them in his surf shop and online, through Facebook and Instagram. They sold well. In one month, he had more followers on his Instagram account for the pens than the one for surfboards.

When he quit surfboards, Saunders wasn’t exactly sure what to do. But he thought he’d keep selling pens and figure out the rest. He didn’t have to look any further.

He named the business High Caliber Craftsman. He sells the pens for about $50 a pop—some go as high as $115—and makes them out of a workshop behind his house.

It’s not easy to tell that both ends of the pen are shell casings from .308-caliber machine guns. (They’re the perfect size for pens.) The casings are sanded, most are coated with a firearm finish called cerakote, and their designs are stenciled and sprayed on—just like Austin did with the artwork on his surfboards.

Saunders offers superhero and movie-related pens, featuring characters like the Hulk, Boba Fett and Stormtroopers. He’s also got “first responder” pens that cater to police officers, firefighters and paramedics. His two most popular models are the America and Thin Blue Line pens.

Saunders is bearded and burly and looks more lumberjack than surfer. This time, he’s not the face of the business. No one is. The biography on the website doesn’t mention him. It offers an email address but no phone number, stating: “Sorry, we don’t accept phone orders. Emails are the best way to reach us.” 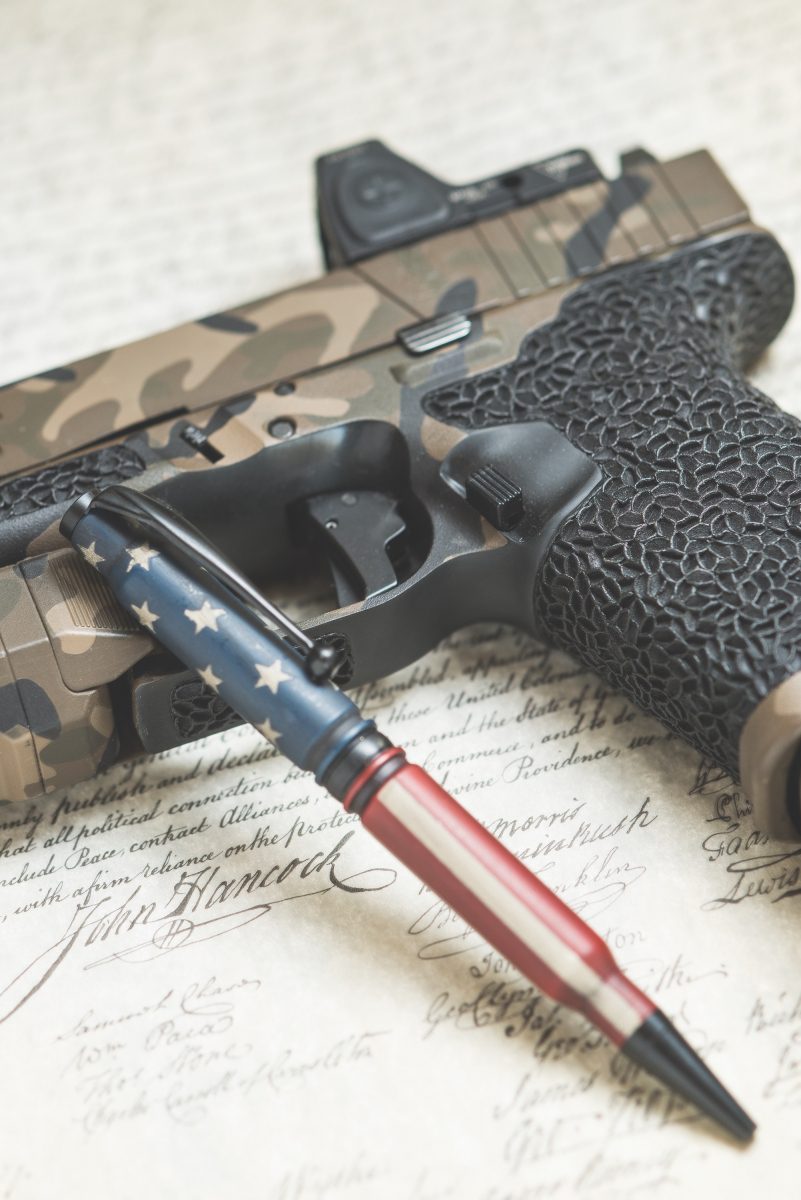 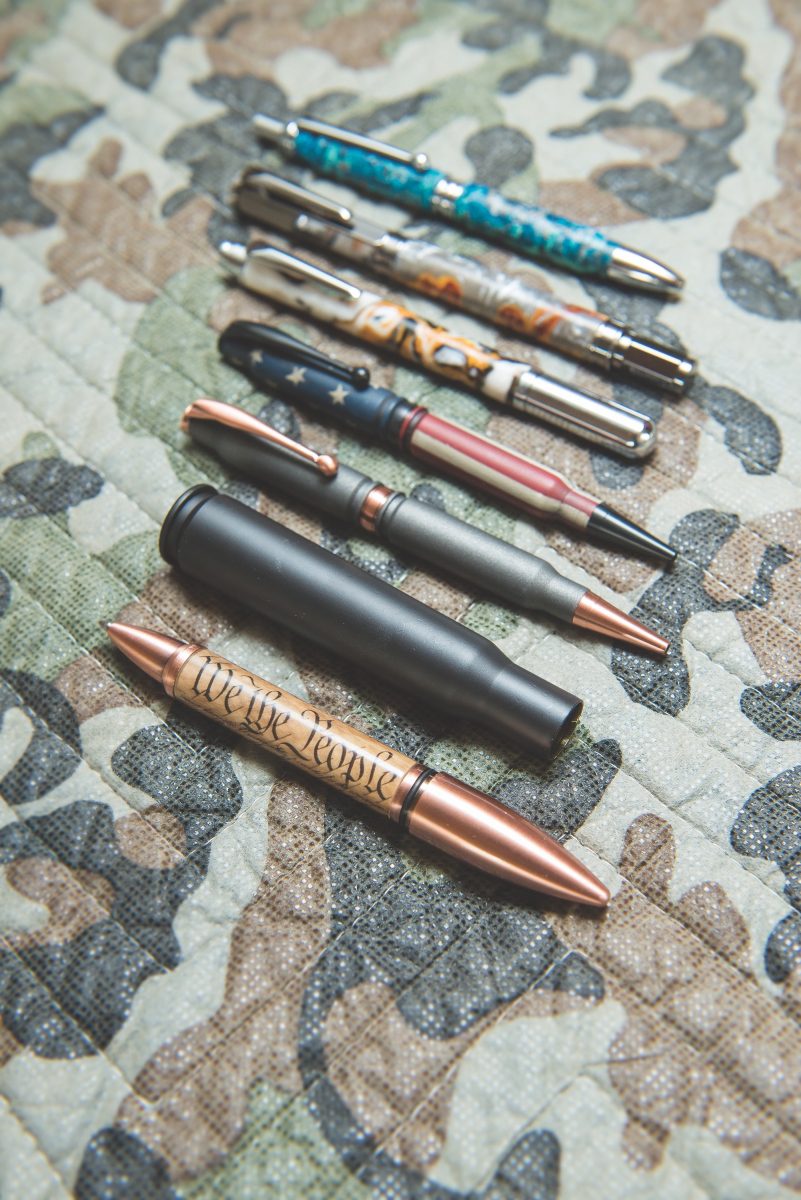 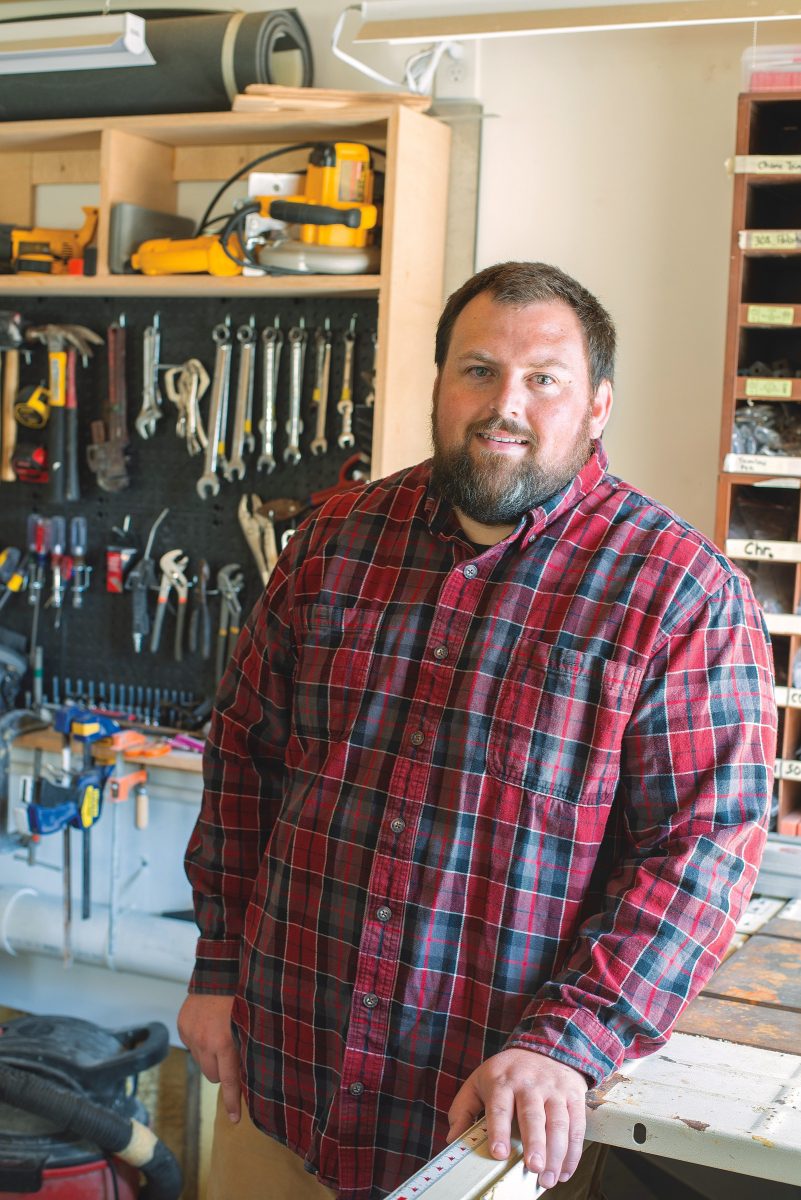 His affinity for bullet pens came naturally—his family loves guns. Dove hunting is their thing, dating back to Saunders’ grandparents. Saunders got his first gun at 5. His backyard is dotted with shooting targets. Most moms tell their loved ones to bring a casserole to Thanksgiving dinner; Saunders’ mom reminds them to bring their firearms.

The drive out to Saunders’ house, near Fentress Airfield in Chesapeake’s heartland, is a step into a Tidewater time machine. Residents have names for their expansive properties like “Tara Plantation.” Some have ramshackle barns that are one good storm from being a pile of wood. And a trip to the mailbox, for some, is considered going on a walk.

Evidence of Saunders’ former life surrounds him. Parked behind his home is a black and white box truck with his surfing logo on the sides and a license plate that reads: “SRF BRDS.” He can’t remember the last time he drove it.

In his workshop, at the end of his long driveway, the floor mat just inside the door says: “Austin custom surf boards.” And the 10-foot light-box sign that once welcomed customers to his surf shop hangs on the rear wall of the workshop.

His staff hasn’t changed much, either. There’s Uncle Joe, who would rough shape Austin’s surfboards before Austin did the precision shaping. And then there’s his cousin, 25-year-old Cody Adams, who started sweeping foam dust off the surf shop’s floor at age 11.

Joe, a former iron worker with a bum knee, is the workhorse. That’s just fine for Saunders and Adams, who like to knock off and sneak over to Sandbridge when the waves are pumping.

Adams is the likeable slacker with long hair. He also doubles as a “manny” for Saunders’ young son and takes Saunders’ friendly teasing in stride.

The shop is broken up into stations. The first is for removing a piece called the “primer” from the shell casings, which are recycled, military-fired rounds Saunders buys from a government auction website. The next is for drilling a hole through them. Then, the pen’s housing is glued into the casing. And so on.

One Monday afternoon in January, Joe is sanding the casings so they can be coated. Behind him, Adams has been gluing pen housing into casings for a few hours.

A Johnny Cash song hums in the background. The conversation turns to when they got started working that morning. Joe got there bright and early at 3 a.m. Adams, not so much.

“We don’t need to talk about times,” he said.

The group keeps things loose and informal. It was the same at the surf shop. If Saunders wants to stop work to build a chicken coop for his backyard, then that’s what they do.

Saunders doesn’t want to talk about the businesses’ finances. But he said he sold twice as many pens during Christmas 2016 as he did the year before. And it was during that first Christmas, overwhelmed with orders, that he recalls telling his wife: “So, this is what a real business is like.”

His success has made it easier to move on from a career he thought would be his one and only. But some of his customers—Saunders had a fiercely loyal following—aren’t ready to give up on him yet. Neff is hoping Saunders will shape boards on a limited basis in the future.

In Kennebunk, Aromando recently ran into a woman who owns two Austin boards. She rides one of them; her son rides the other. Aromando told her that Saunders had stopped making boards and joked that she shouldn’t sell the ones she has, even though they’re likely to increase in value.

Don’t worry, she said, she never planned on selling them anyway.