Bites in the ‘Burg: Eats in Williamsburg 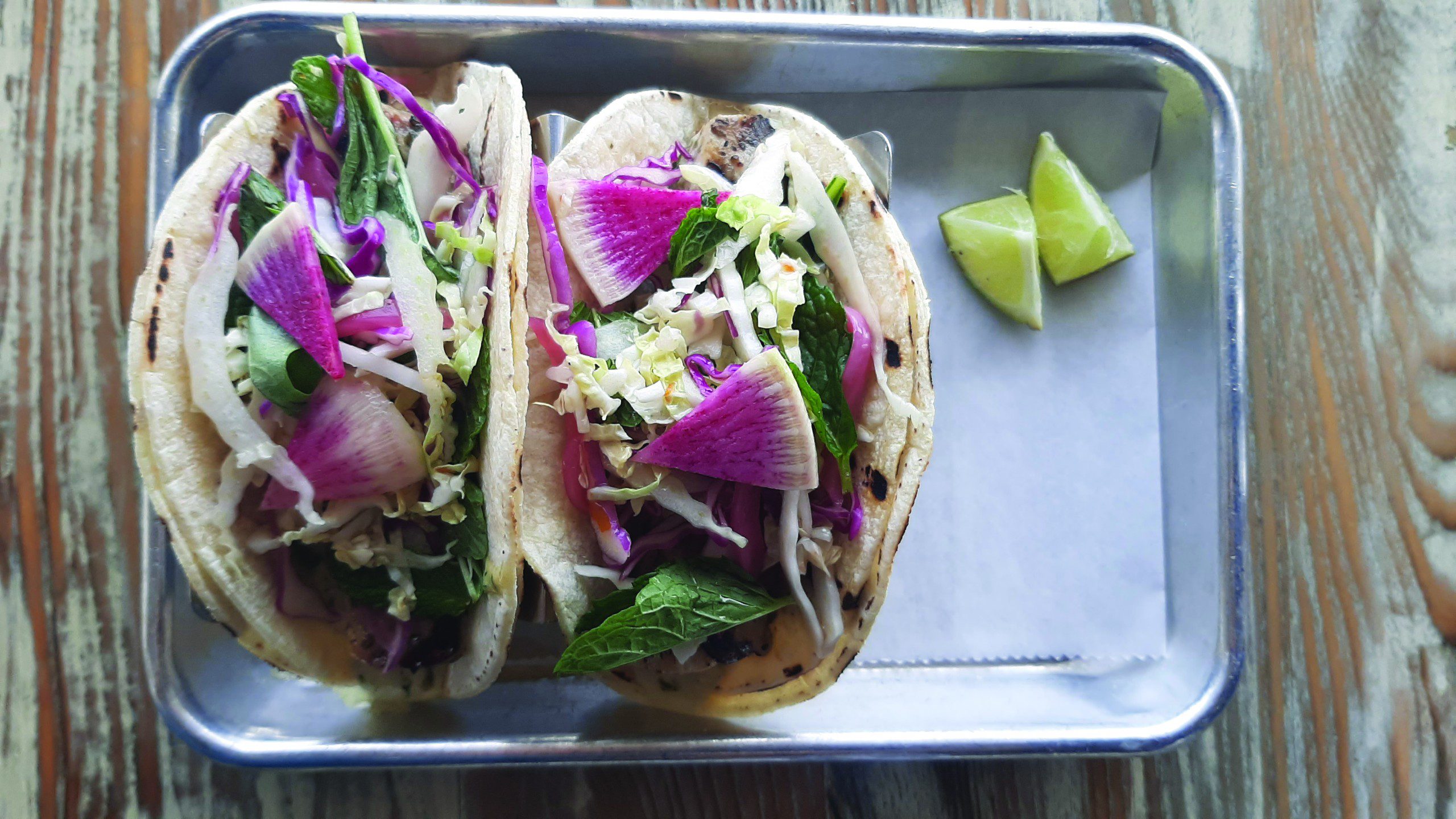 Williamsburg has long been known as a fine dining hot spot in Coastal Virginia. But there is also a plethora of places serving thoughtfully prepared eats and drinks that will satisfy your hunger for a quick breakfast bite, a light lunch, a mid-afternoon pick-me-up or, hey, even a shot of liquid courage.

On recent day trips with my Coastal Virginia Magazine colleagues, I tried a few new ones as well as a tried-and-true favorite or two. Whether you live and work in the colonial capitol or you’re in town for a day of tricorn hats and history tours, consider fueling up at one of these establishments.

Casa Pearl has been on my ’Burg bucket list for several years, and now I know why. Its imaginative marriage of oyster bar and taco joint, housed in a former Texaco gas station in The Edge District, is gloriously greater than the sum of its parts. But its parts are pretty great, too. I recommend mixing and matching with a friend from their mostly app-sized “Raw Bar, Snacks, Cold, Hot and Tacos” menus.

We started with raw oysters—from Blackberry points from Little Wicomoco River to Hatteras Salts from the Outer Banks—and worked our way through next-level Hushpuppies with honey butter and sea salt, plump NC Peel ‘N Eat Shrimp, more-veggies-please Crispy Brussel Sprouts with lemon-caper vinaigrette and parmesan, and a special of Swordfish Tacos, as artfully presented with watermelon radish and fresh mint leaves, as they were tasty.

But it was a humble dish of creamed corn that arrived like an unassuming belle of the ball and knocked our socks off, thanks to a recommendation from chef Mikey Maksimowicz. Another lunch special, this beautiful, belly-warming bowl of sweet corn with a helping hint of spice was topped with shaved jalapeños, house-made barbecue corn nuts, queso fresco and micro-greens. EatCasaPearl.com

Brewing Up Something New at The Bake Shop

From the team that brought you Amber Ox Public House and Precarious Beer Project comes a new bake shop, aptly named The Bake Shop, with a bite. “The window for imagination and creativity is huge,” says sous chef and head baker Liv Duplicki, citing a recent collab in which the bakery’s rye bread was used as a key ingredient in a cold brew stout for Precarious. If it’s too early in the day for stout, head around the corner to The Bake Shop on Armistead Avenue. 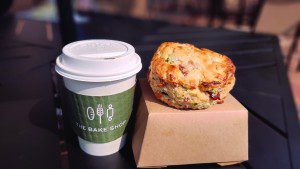 There you’ll find expertly crafted bagels and scones, their wildly popular sticky buns and Detroit style pizza—“kick-ass pies” with “killer seasonal ingredients,” as their website touts. I started my morning off right on a recent visit with their savory-sweet Ham & Cheddar Scone and bomb Blueberry Turnover. Coffee is also serious business The Bake Shop, where head barista Liana Vulaj schooled me on the beauty of a single origin Ethiopian pour-over. BaketheBurg.com

Luxuriate for Lunch at Opus 9 Steakhouse 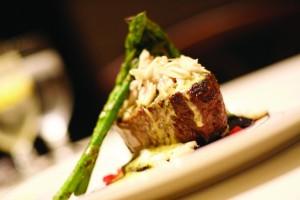 Hot tip for anyone craving a fine dining experience with more of a soup-and-sandwich price tag: Eat at a high-end restaurant for lunch. The elegant Opus 9 Steakhouse in New Town Center is a go-to for special occasions and date nights—where luscious Lobster Scampi is but an opening act for Filet Mignon and Lamp Chops—but they also have a deliciously reasonable lunch.

I recently assuaged my inner comfort food junkie with a perfectly portioned meatloaf and mashers lunch special that came with sautéed summer squash. But you can go big on a budget and try their “Oscar 9,” a center cut filet atop a marinated portobello mushroom and asparagus with classic bearnaise and lump crab. The 6-ounce lunch portion goes for about half the price of the 8- or 12-ounce dinner versions of the entree, which start at about $60. Opus9Steakhouse.com

“What’s with the name?” You may wonder over your cup of joe. So did I. An oversized print of the periodic table that greets you as you walk into this newly opened java spot in the Edge District, offers a clue. As does their tagline, “The Science of Good Coffee.” Column 15 on the periodic table is home to nitrogen, and nitro cold brews are their specialty. Mystery solved. 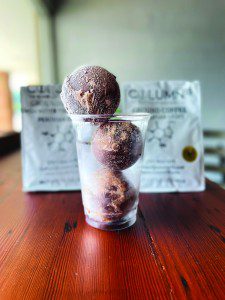 Started as a roastery selling bagged beans to shops and farm markets, this is a long-awaited storefront for a business created by two former William & Mary students with a passion for community and making cold brew without the bitter bite. Hence a menu that stars such smooth, chilled choices as their Obsidian Nitro Cold Brew, with notes of dark chocolate and nuts, and invites you to pair them with Nitro Cream flavors like Lavender Chocolate Mint, Salty Valentine and Milky Way. We were also instantly obsessed with their coffee ice balls, which cool your drink without watering it down. Column15.com

Speaking of Speakeasies at Copper Fox 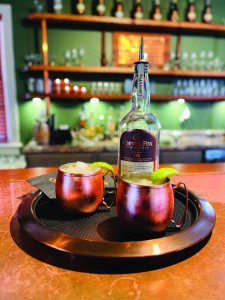 If you need me, I’ll be in the speakeasy. It’s the one behind the secret bookcase, of course, accessible via a hidden niche in the lobby of Williamsburg’s Copper Fox Distillery, where hand-crafted whisky has been a passion project for owner Rick Wasmund since he opened his first location in Sperryville in 2005. Tours of the local distillery are back in full swing and include a walk-through of the reimagined former motel, a behind-the-scenes glimpse of its production areas and a visit to the speakeasy lounge or courtyard patio.

On a recent visit, we cozied up to the bar in the lounge and cooled off with two refreshing sippers from their cocktail menu—a Bourbon Mash Mojito and their Pirate Tiki, made with bourbon mash spirit, passion fruit, lime juice, orange juice, house made grenadine, aromatic bitters and a rye floater. As of press time, Wasmund was still tight-lipped about an exciting bourbon release featuring a unique aging process Copper Fox has in the works. Stay tuned for an auspicious announcement, whisky lovers. CopperFoxDistillery.com

Meadows Custard Makes Its Way from PA to VA

While The Bake Shop is importing a Detroit take on pizza, The Meadows Original Frozen Custard, also recently opened, is bringing to town a beloved sweet treat all the way from Duncansville, PA. A franchise inspired by the original family-owned roadside stand, The Meadows in Williamsburg on Richmond Road has quickly become a favorite stop for those craving custard’s signature rich, creamy texture and an ever-changing menu of fun flavors. 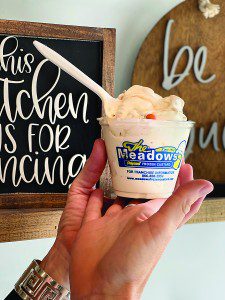 Alongside kid-tested and approved Cookie Dough, Peanut Butter Overload and Unicorn flavors, you might find a Black Raspberry Oreo, a Meadows Mallocup, or their signature 757 Key Lime. And, they’re mixing in some fresh, local ingredients—partnering with the likes of nearby Sweethaven Lavender farm on a Lavendar custard, MillFarm Christmas Trees and Berry Farm on a summery Peach custard, and the aforementioned Column 15 Coffee on a Nitro Cold Brew Float. Facebook.com/MeadowsCustardWMBG