Born Primitive is much more than a brand. When enthusiasts exercise in their “apparel of the driven,” they embody a work hard, no excuses mentality that has been a secret to success for this local business.

“From our inception, we wanted to create more than just a company, or a snatch short or a sports bra,” says Mallory Handlon, Born Primitive’s chief operations officer. “We wanted to stand for something—a lifestyle.”

It’s a way of life that customers thrive on, including a roster of more than 400 brand ambassadors who represent Born Primitive gear all over social media by posting pictures of themselves working out as hard as ultimate warriors while sporting attire like Double Take Booty Shorts. 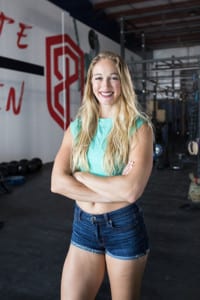 Mallory started Born Primitive in 2014 with partner and chief executive officer, Bear Handlon. At the time she was an Indiana dental hygienist, and the company’s Yale-educated co-founder worked for Red Bull. They started with one product—men’s snatch shorts—but had big goals to build on those from the company’s inception.

“We started off with me working my butt off and going to events every single weekend wherever I lived,” says Mallory. “And we were eventually able to start creating products that I wanted to wear, that I was comfortable in.”

Today they sell everything both women and men need for an epic sweat session—shorts, sports bras, leggings, tops and tanks—and a variety of leisurewear perfect for rest days like joggers and hoodies.

Each piece of clothing is made to ensure athletes of all types and skill levels are comfortable and can perform at their best. The active-duty-owned-and-operated company also prides itself on being “patriot-inspired.”

Mallory attributes a massive reach within the Navy and overall military community to the brand’s popularity in Virginia Beach. After moving to the city in 2016, it ranks as a top five market for Born Primitive sales. The brand also enjoys a cult following within the CrossFit community and has gained tons of followers and fanatics throughout the country.

Competitiveness has always been a key to Born Primitive’s achievements, says Mallory, who notes that she and Bear were both former high-performing athletes—him at the college level.  We don’t like failing,” she says. “We have always been hard workers. It’s something in our nature.”

Giving back, another company standard, inspired the duo to begin the Back to Gyms stimulus to assist struggling gym owners during COVID. For 10 days, Born Primitive donated 50% of profits (a total of $186,000) to CrossFit gyms throughout the U.S. After that promotion was so successful, they went on to partner with other brands for Stay For May, a program that rewarded customers with gift cards, including 1.5 million in apparel from Born Primitive, for retaining their gym memberships. 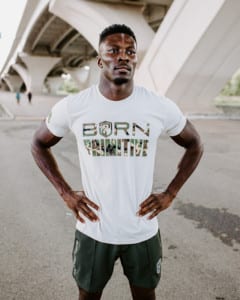 In the next year, the brand will keep its core values in check while also making international expansion a top priority. They recently signed with a partner in Kuwait to create Born Primitive Middle East, and Born Primitive South Africa will join an already-established presence in Israel, the U.K., Canada and Australia when it launches this year. Mallory strives to make Born Primitive a household name with a wide reach.

The goals are lofty, yes. But she is determined to be an example for supporters and live up to the slogan on one of Born Primitive’s first T-shirts:

Born Primitive “apparel of the driven” can be purchased on BornPrimitive.com or locally at Endurance Apparel and Gear in Virginia Beach.