If ever a style were having a Renaissance moment, that style would be mid-century modern and that moment would be now. 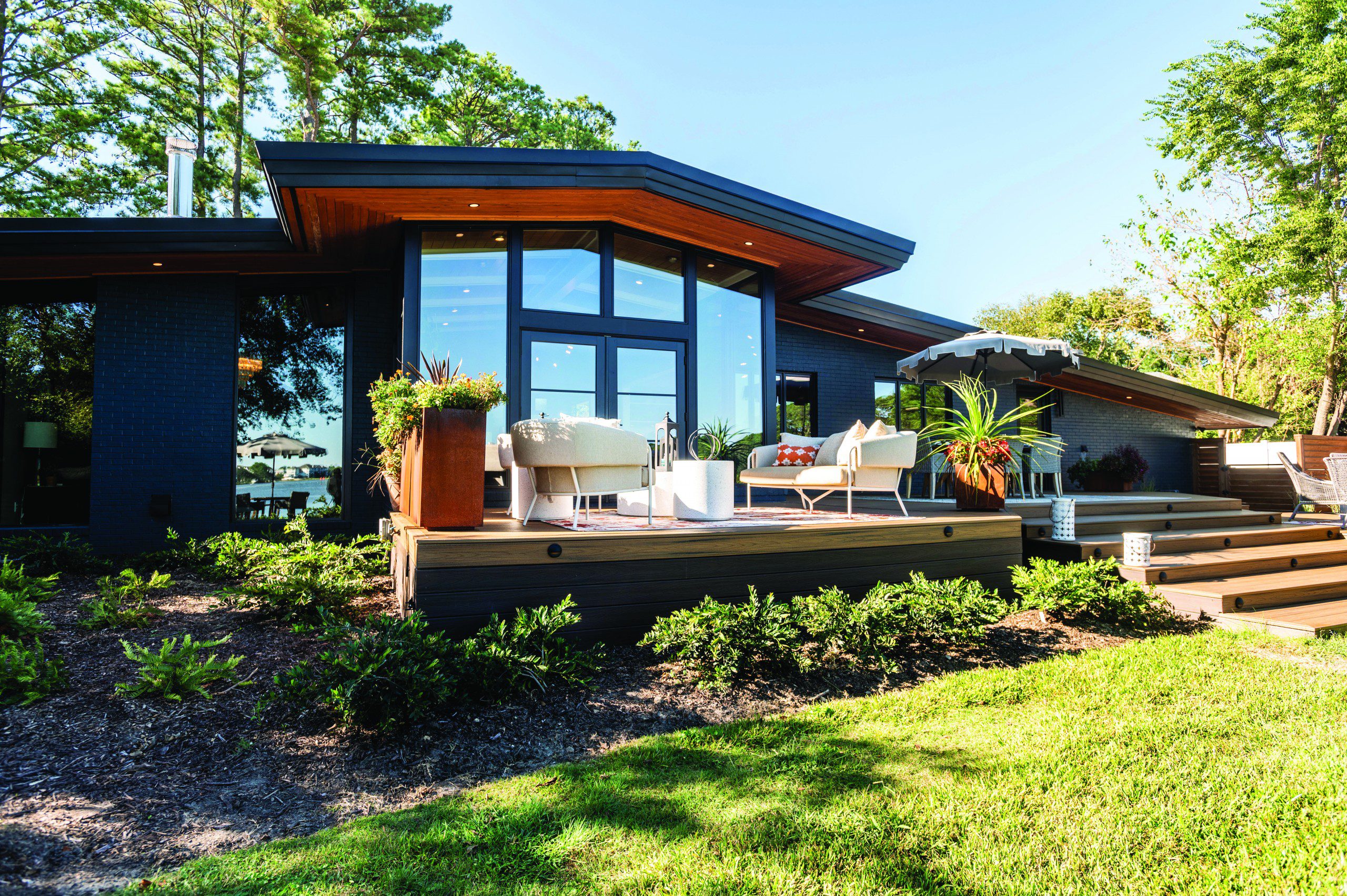 All Photos by Will Hawkins 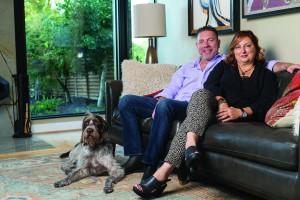 Television shows, advertisements, home interiors magazines and mainstream home goods stores have all embraced the look. While these homes were deemed “tear downs” not so long ago—or on the receiving end of unfortunate remodels to “update” them—an increasing number of today’s homebuyers, like Julie and Jerome Hashagen of Norfolk, see the beauty in retro-modernity.

But what is that mid-century modern look?  It can be imprecise, yet you know it when you see it.  Essentially, the style refers to post-WWII Bauhaus-inspired architecture, as well as furniture, products, urban and interior design. 1945-1969, in the United States.  Some date the style’s beginnings to the 1930s with the influence of Frank Lloyd Wright and Mies van der Rohe.  Popular for its clean lean lines, absence of decorative adornment, organic shapes and materials, open public spaces, and merging of indoors and out, mid-century modern plays nicely with others. 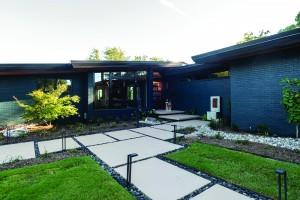 Atomic ranch houses refer more specifically to single- or split-levels designed by or inspired by Joseph Eichler’s and George Alexander’s California tract houses with post and beam construction, rear glass facades and often flat or shed roofs.  Coastal Virginia is hardly a mecca for atomic ranch houses but there are a few gems, both in terms of individual houses and neighborhoods, like Woodhurst in Virginia Beach.

But these homes aren’t everyone’s cup of tea and, in fact, the Hashagens looked at their current home, built in 1959, three times before purchasing in 2019, with Jerome initially refusing to even step foot inside.  But Julie, the co-owner of Enspire Energy, an all women-run natural gas marketing company, sold her recalcitrant military husband on the view and pier access to the beautiful Lafayette River, where the Elizabeth River Project subsequently restored the waterfront with oyster castles and native plants. 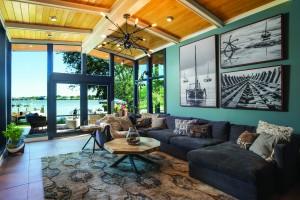 Most every inch of the 3000 square foot home, with its 4 bedrooms and 3 full baths, has been reimagined by Julie. Though not an interior designer, she could be. Borrowing from her photography and jewelry-design vision and skill sets, she has transformed what was once modern, light, and bright—but perhaps more expected—into a home that celebrates the mid-century era in a way that is highly personal and bespoke with warmth, texture, and pattern unique to her sensibilities.

Staying too true to an era can result in a time capsule.  Julie avoided that downside by confidently combining compatible pieces from different periods, though all anchored by a mid-century aesthetic.  She loves rich texture, a deep color palette—the Hashagens painted the previously red brick exterior of their home Dark Night, a sultry Sherwin Williams color, with black trim and windows—and, especially, the influence of Morocco with its seductive shimmer, tactility and geometric patterning. 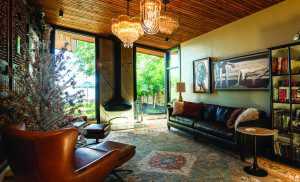 To keep from busting the budget, Julie’s strategy relied on seamlessly combining period, new and custom pieces in mid-century styles all along a price point continuum. She sourced her furnishings, accessories and art from antique shops; local, overseas and online stores; and directly from artists, designers and artisans, including local artist Andy Harris. While the suspended fireplace by Paxfocus was imported from France and the Hashagens bedroom chandeliers from Italy, rugs came from down the road at Mark Gonsenhauser’s Rug and Carpet Superstore in Virginia Beach. 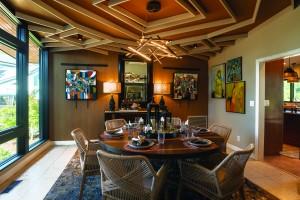 Julie’s approach to design pays as much attention to what’s above as what’s below with, for instance, a paneled ceiling providing an unexpected backdrop to a trio of crystal chandeliers in the sunken living room.  In the dining room, she designed a boldly geometric coffered ceiling, all diagonals and diamonds, that is echoed in the jutting and crossing bars of the black chandelier and the crisscross rope design of the chair backs.  A metal privacy screen on a barndoor-style rolling mechanism continues the play with its small hexagon motif.

Lest these angles dominate, Julie balances them with curves, especially bold circular mirrors in pairs or groupings and flush mount light fixtures. Balance is also the key to her cozy-sultry color palette kept in-check by a flood of natural light from expansive windows. Her selections play warm sand and pumpkin off cool and neutralized aqua and charcoal gray-blue with the occasional infusion of rich red. Paint colors are repeated throughout the home—on a wall here or a ceiling there—to create both unity and interest. 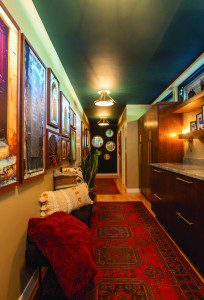 Furniture boasts mid-century lines but often with an unexpected texture like hammered metal or carved wood.  Julie’s design confidence allows her the freedom to combine a mid-century butterfly chair and period light fixture in the same space as a bed cover with extravagant tassels or sparkling metallics.

Framing the bold and minimal geometric landscape design by Diane Smith of Di-Namic Landscape Designs—with installation by Bay and Beach Landscapes—is a custom horizontal slat fence that coordinates with the home’s cypress soffits. Large pavers and floating platforms lead from the driveway to the front porch with its eye-popping wood and glass pivot door by Sierra Pacific.  In the back, a multi-level “Harvest Gold” Trex deck joins the fully appointed outdoor entertaining spaces to the back lawn, which slopes gracefully to the shoreline. 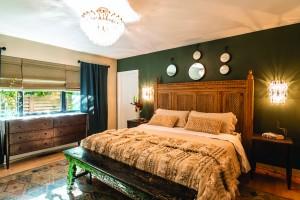 An American mid-century aesthetic provides the banks to Julie’s design river that flows freely through other times and cultures. Global design influences meld the Hashagen’s appreciation for home with their passion for travel abroad.  The result is a warm, inviting, and inspiring home on the shore of one of coastal Virginia’s premier waterways.

Betsy DiJulio is a full-time art teacher, artist and curator with side hustles as a freelance writer, including for Coastal Virginia Magazine, and a vegan recipe developer and food stylist and photographer for Tofutti Brands.