There’s something about rising temperatures that lures us to our favorite Mexican restaurant for a round of fish tacos. But when we set out in pursuit of five fish tacos that we could recommend to our readers, one thing became very apparent—the words “fish taco” mean something different to just about everyone.

Our search turned up an enticing range of renditions. For example, “Baja style” narrows it down in that you are likely to be served fish in a taco shell with shredded cabbage and creamy-spicy Baja sauce. But that shell may be corn or flour, the fish grilled or fried, the Baja sauce any number of addicting “crema”-based amalgamations, and the garnishes a gamut of crunchy-herby goodness that might include finely chopped white onion and fresh cilantro. Or not.

Beyond Baja, there’s blackened, grilled or batter-dipped-and-fried fish, tucked into both steamed and grilled corn and flour tortillas, drizzled with sauces or dolloped with deliciously distinctive versions of pico de gallo and topped with lettuce, tomato and a sprinkle of fresh lime juice.

In the end, though our five featured tacos represent different styles and some creative iterations, what they have in common is a tantalizing balance of tastes, textures and toppings to satisfy a serious fish taco craving, come Cinco de Mayo or any other warm-weather day of the year.
—Angela Blue and Betsy DiJulio 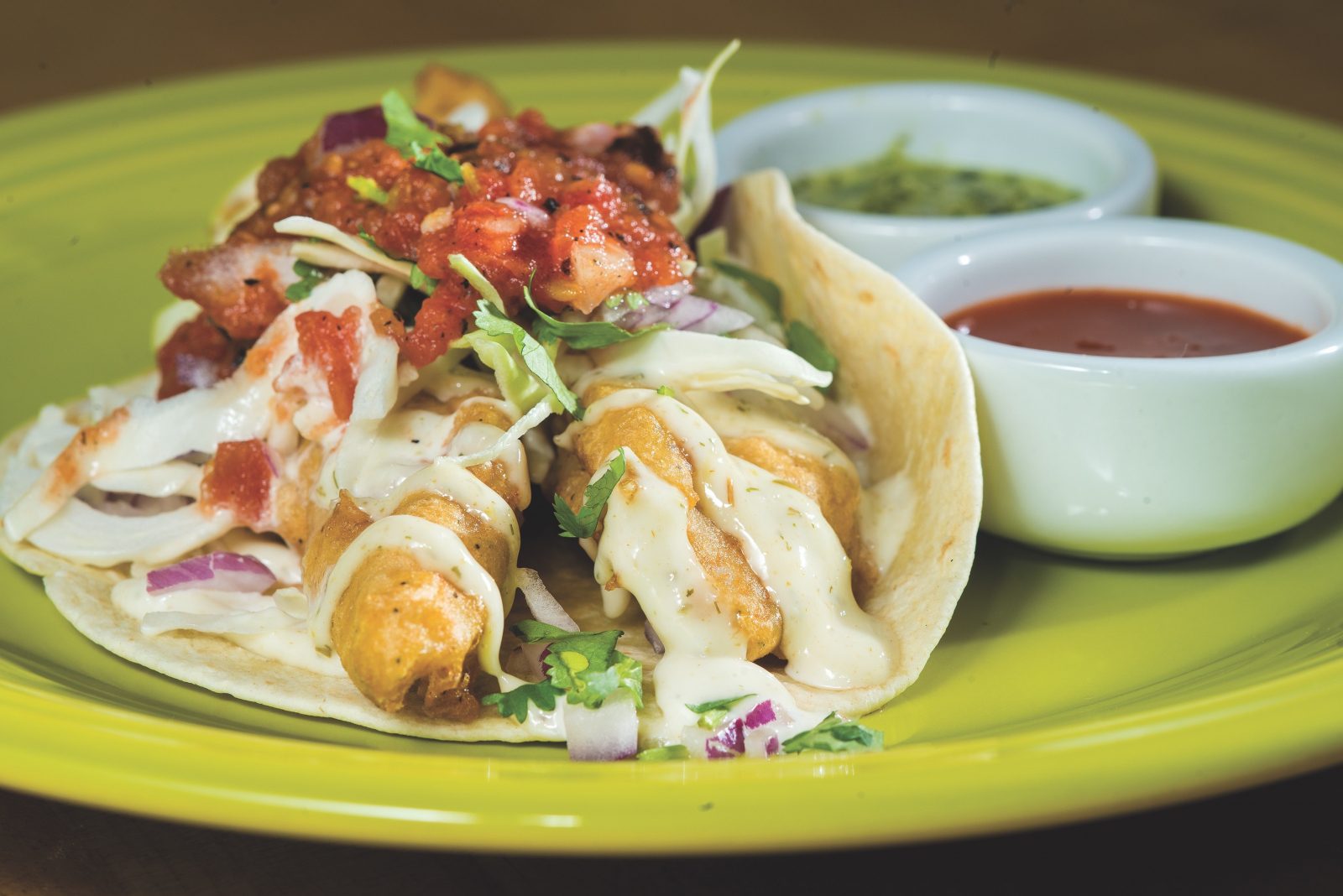 If you’re looking for fish tacos with a touch of flair, go the Gringo’s route. Gringo’s Taqueria at the Oceanfront has a wealth of eclectic options, from tuna mushroom to grilled asparagus and portabella for the vegetarians. The Baja Fish Taco, in particular, is more straightforward with the usual suspects: red onion, slivers of cabbage and beer-battered tilapia. The kicker? The moment their habanero cream sauce meets the fresh salsa. Don’t be deterred by the mention of habanero; it’s more restrained in its heat and similar to tartar sauce. Slather a healthy smear of this silky perfection with their zesty salsa, and your tastebuds will be singing.
—AL 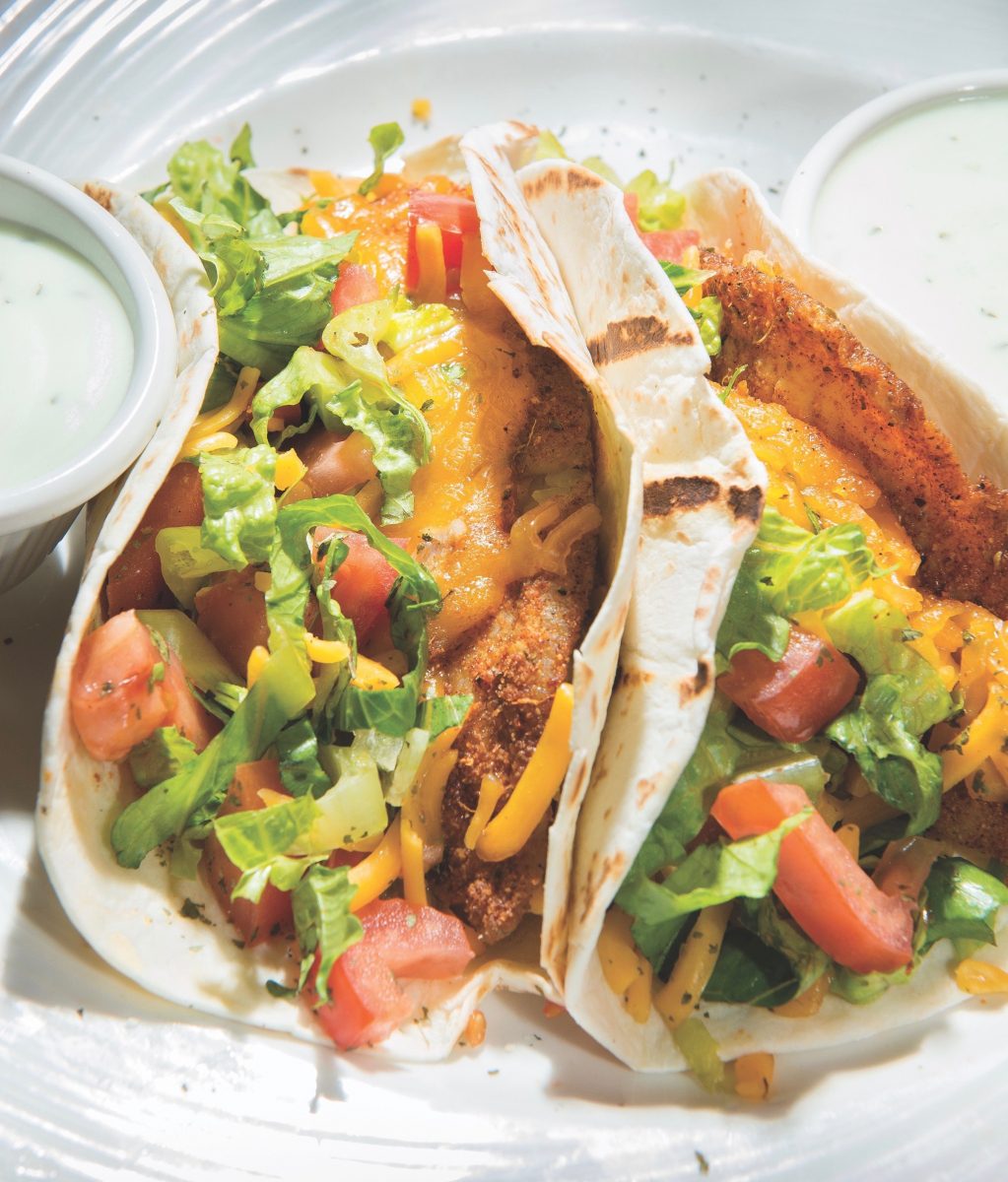 On Pirate’s Cove’s seafood-centric menu, $9.99 will get you two fish tacos plus a side of mildly seasoned black beans. But these aren’t just any fish tacos. Located in a strip mall in Chesapeake, the award-winning Cove is an unassuming mom and pop seafood restaurant owned by locals John and Becky Tillery. Likewise, the fish tacos are equal part expected and unexpected. Folded inside a soft, flour tortilla with lovely grill marks is a generous portion of lightly blackened tilapia. This ultra-mild fish functions like a culinary blank slate and, as such, is the perfect foil for the distinctive but restrained herby-and-spicy char imparted by blackening. A perfectly proportioned pile of super fresh shredded lettuce and chopped tomatoes—garnished with a few shreds of colorful cheddar—makes this one juicy taco.  But it is the cooling, tangy sauce that makes it a next level taco. Their Cusabi Sauce combines chopped, fresh cucumber and wasabi into what tastes a bit like a creamy, Ranch-type dressing that, had you no shame, you’d suck up with a straw.
—BD 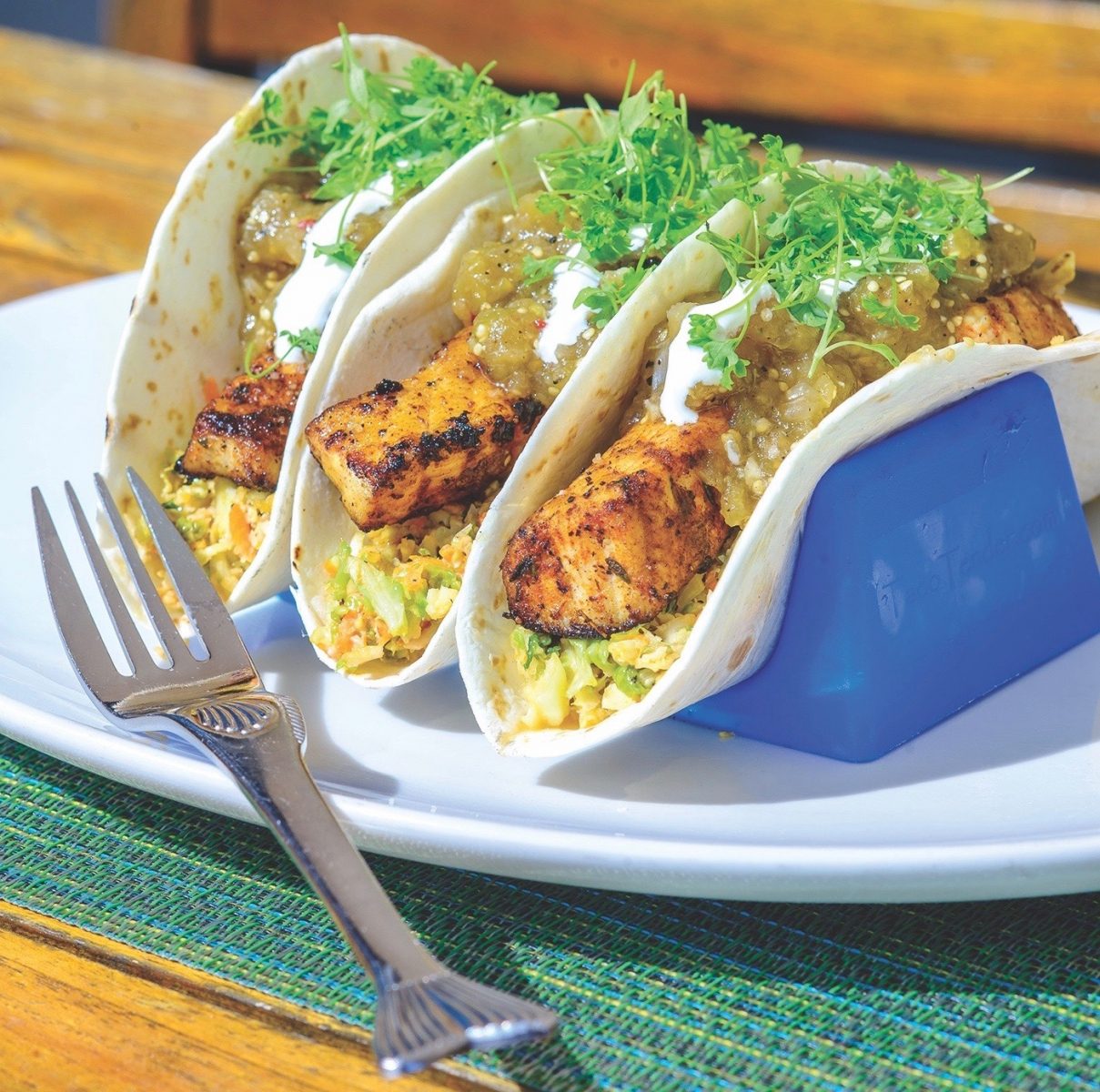 The first alluring aspect about the Blackened Fish Tacos at Fin Seafood is the freshness of the ingredients. From the just-off-the-dock, catch-of-the-day fish to the micro cilantro garnish (likely grown by Chef Kenny Sloane), everything except the tortilla is house-made, including the coleslaw, sour cream and salsa verde created from tomatillos that are smoked in-house.And since the protein used is the catch of the day, the fish tacos you have today may be a little different the next time you order them. The next enticing element is how the flavors meld together: the sweetness of the coleslaw perfectly complements the tart salsa, while the coolness of the sour cream tames the heat from the blackening spices. Even the soft tortillas are flash-grilled to add a char line to the presentation while also offering up a slight “charcoally” bite to the other cascade of flavors. And the crowning component is the knowledgeable and friendly kitchen staff and servers. All in all, the experience is perfection on a plate.
—BB 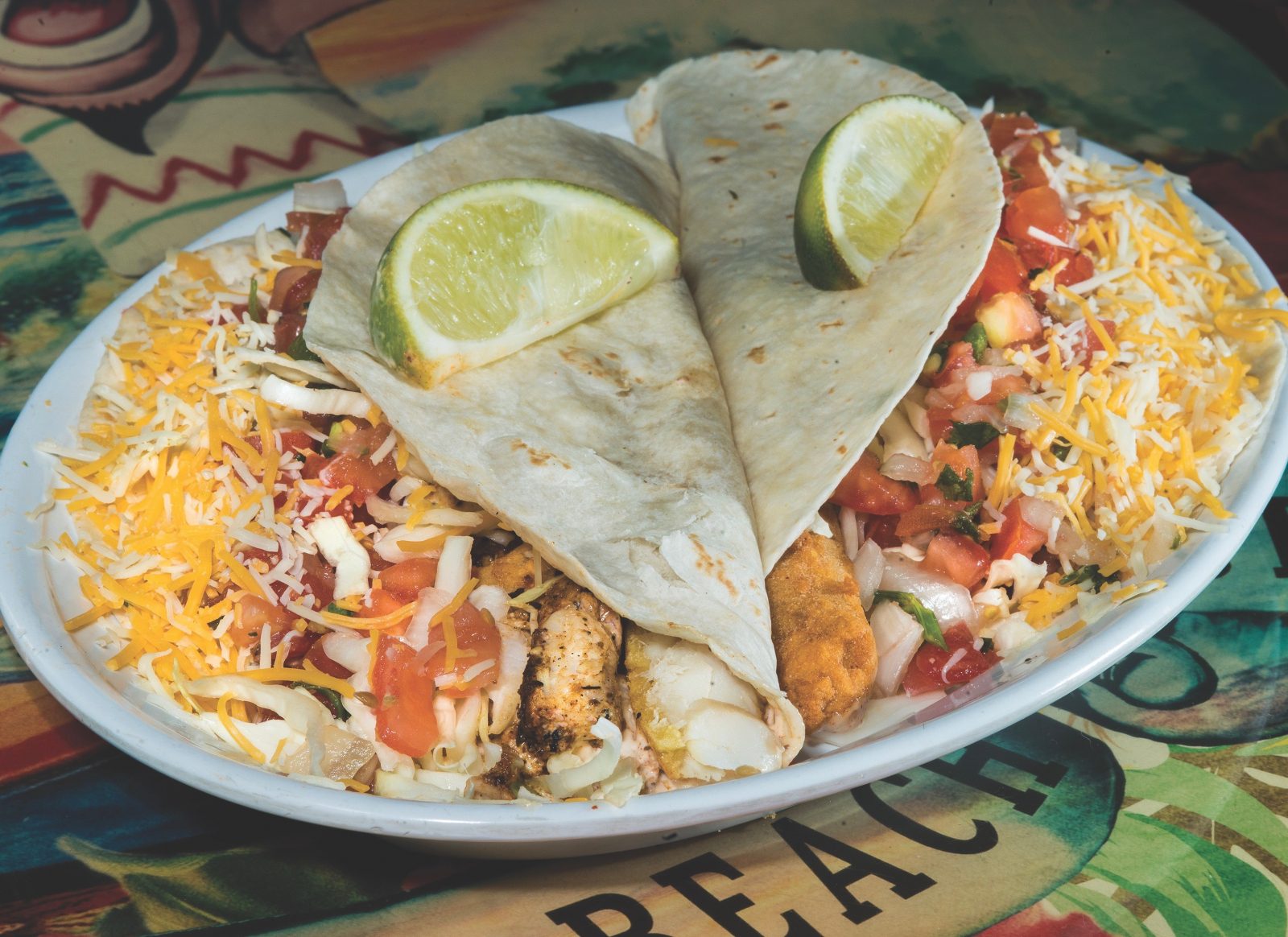 Hot sauce aficionados will meet their match with just a dapple of the homemade sauces at Baja Cantina. While there might be tears, dress your tacos in one—or all—of their four homemade sauces: mild, medium (made from serrano peppers), hot habanero and jalapeno-garlic. Now, back to the taco talk. From scallops or shrimp to beef or chicken, you can also upgrade to a premium fish, like mahi-mahi or tuna. From there, choose to have your fish blackened or grilled between flour or corn tortillas, which is of course accompanied by lettuce, cheese and sour cream. Then, don’t forget to sauce ‘em! We like to call this your classic fish taco, turned up a few notches.
—AL 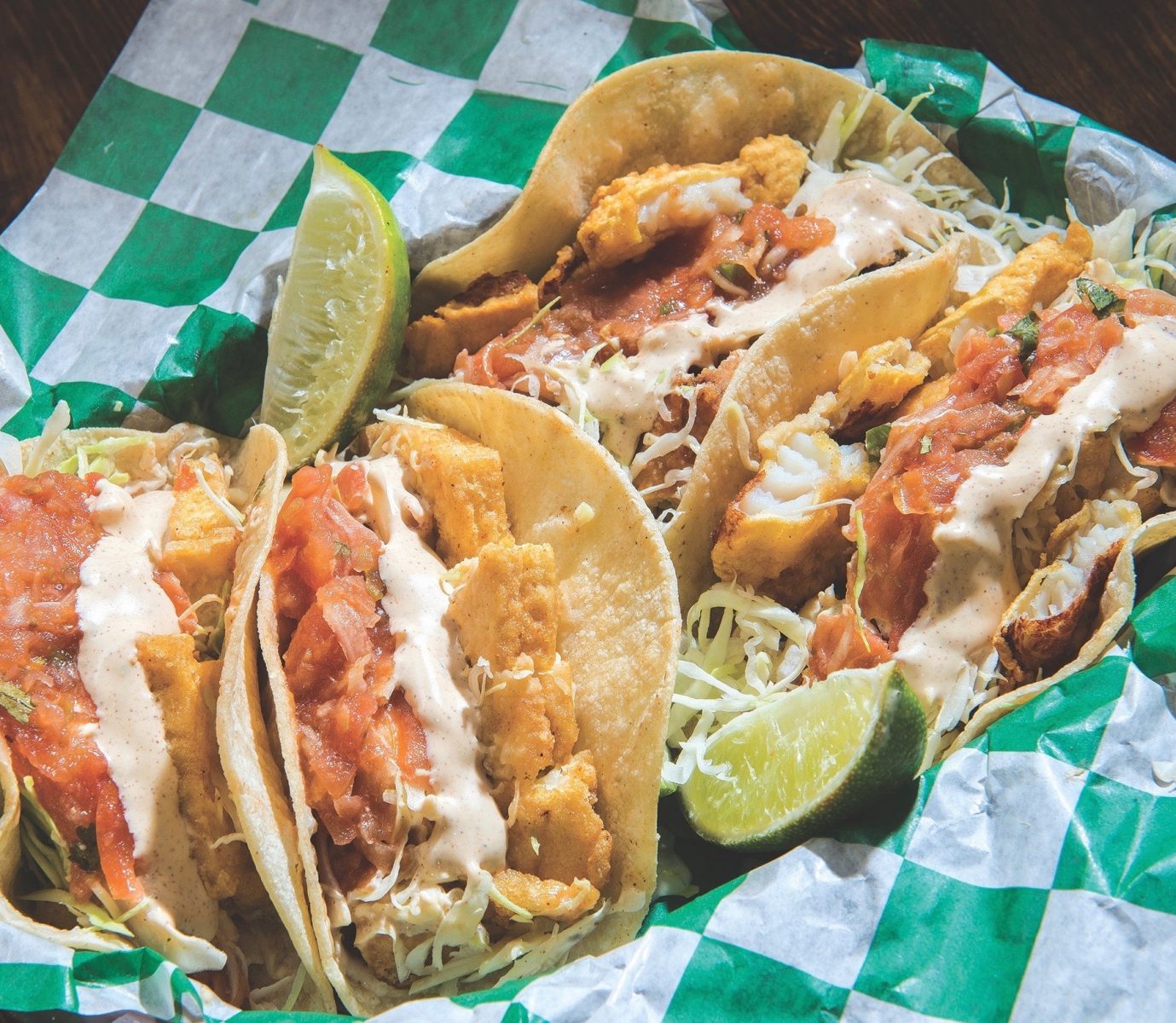 Former southern Californians John and Robyn Muscara brought a bit of the Baja Peninsula to the East Coast when they moved to Virginia and opened their first Pelon’s location in 2005. The restaurant’s extensive but accessible menu is all California fresh-Mex all the time in two local, relaxed and beachy-casual locations: Norfolk and Virginia Beach (they have a Richmond location as well). Served up in their signature red plastic baskets lined with black and white checkered paper, on appearance alone, it’s easy to see why these soft tacos have earned the moniker “Famous.” Warm, white corn tortillas—purchased raw and finished on the griddle—cradle thin strips of corn-flour-dusted-and-fried, mild, white fish topped with a heap of hand-shredded cabbage and drizzled with a zippy salsa fresca (fresh tomato, onion, garlic and cilantro) along with the epic sour cream-based and chipotle-spiced Baja Sauce. Wedges of fresh lime are served on the side. Easy to eat with a perfect balance of tastes, textures and ratios of creamy-crunchy goodness, we give these tacos—and we tried many—a perfect 10.

For a reasonable 15 percent surcharge, vegans can get the whole enchilada, so to speak, by enjoying at least 20 items on the menu, including the “tofu fish” tacos, with fried tofu substituted for the fish. No, the tofu won’t fool anyone into thinking it is fish, but it is a delicious vegan version of the experience, especially with the irresistible Baja sauce that, quite honestly, we could devour with a spoon.
—BD