Guida Collection at ODU Recounts the Story of the Norfolk Sound 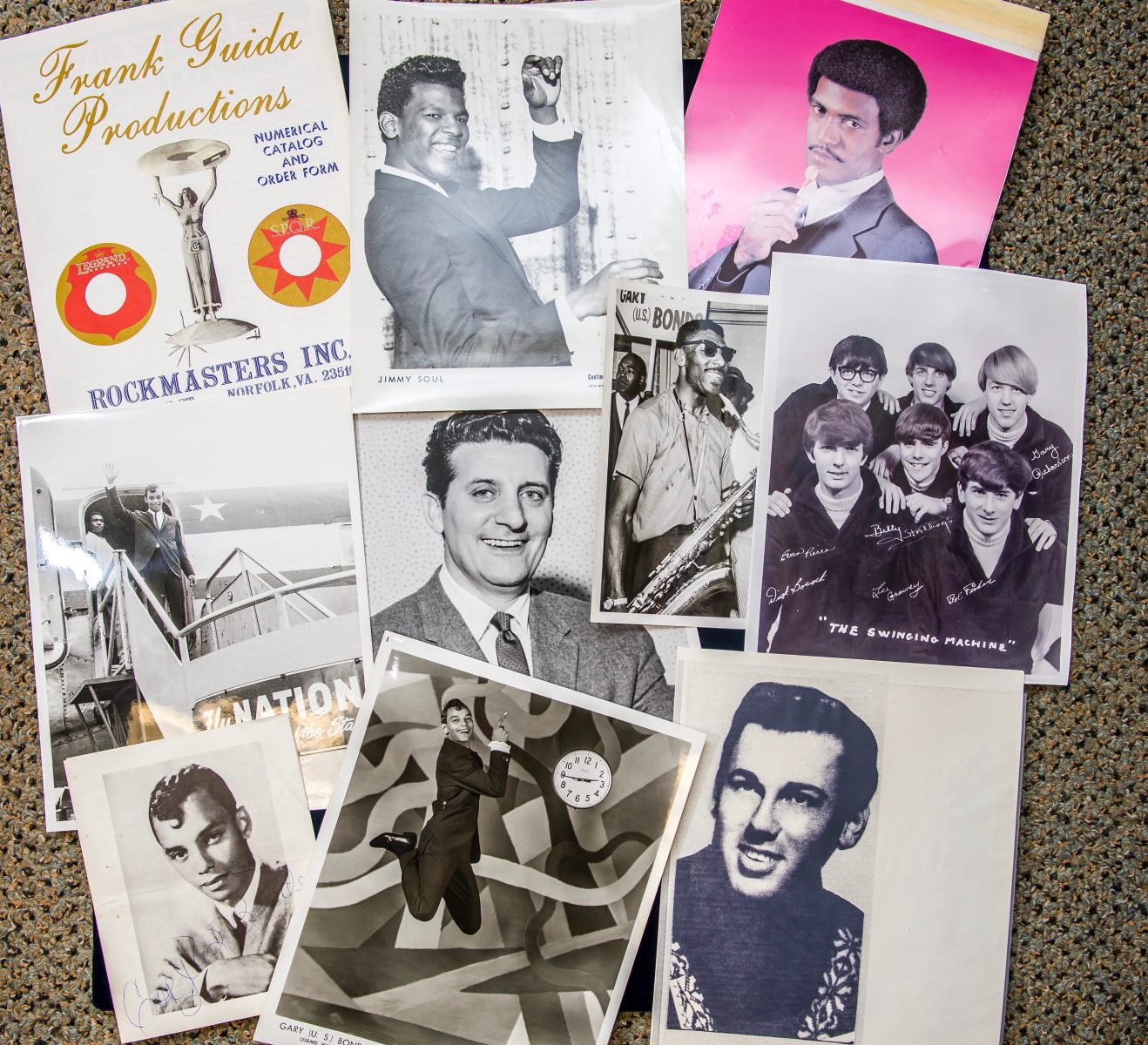 Photos courtesy of The Frank and Carmela Guida/Rockmasters International
Collection

Those rowdy party noises emanating from Old Dominion University these days might not be the students. The holdings of record producer Frank Guida, who helped popularize the rollicking “Norfolk Sound,” now reside in ODU’s Perry Library as part of its Special Collections.

The Frank and Carmela Guida/Rockmasters International Collection includes original recording equipment, tapes, records, photographs, master discs, correspondence and legal papers saved from Guida’s active 40-year career as a music maker, as well as his work as a playwright, visual artist and civic leader. Joseph Guida, Frank’s son, says that he and his sisters Anne Kent and Lydia McHenry thought it only proper that the collection remain in Norfolk, which was their father’s unlikely home base for rock ‘n’ roll success. Frank Guida passed away in 2007, but this noisy new archive keeps his beat alive. 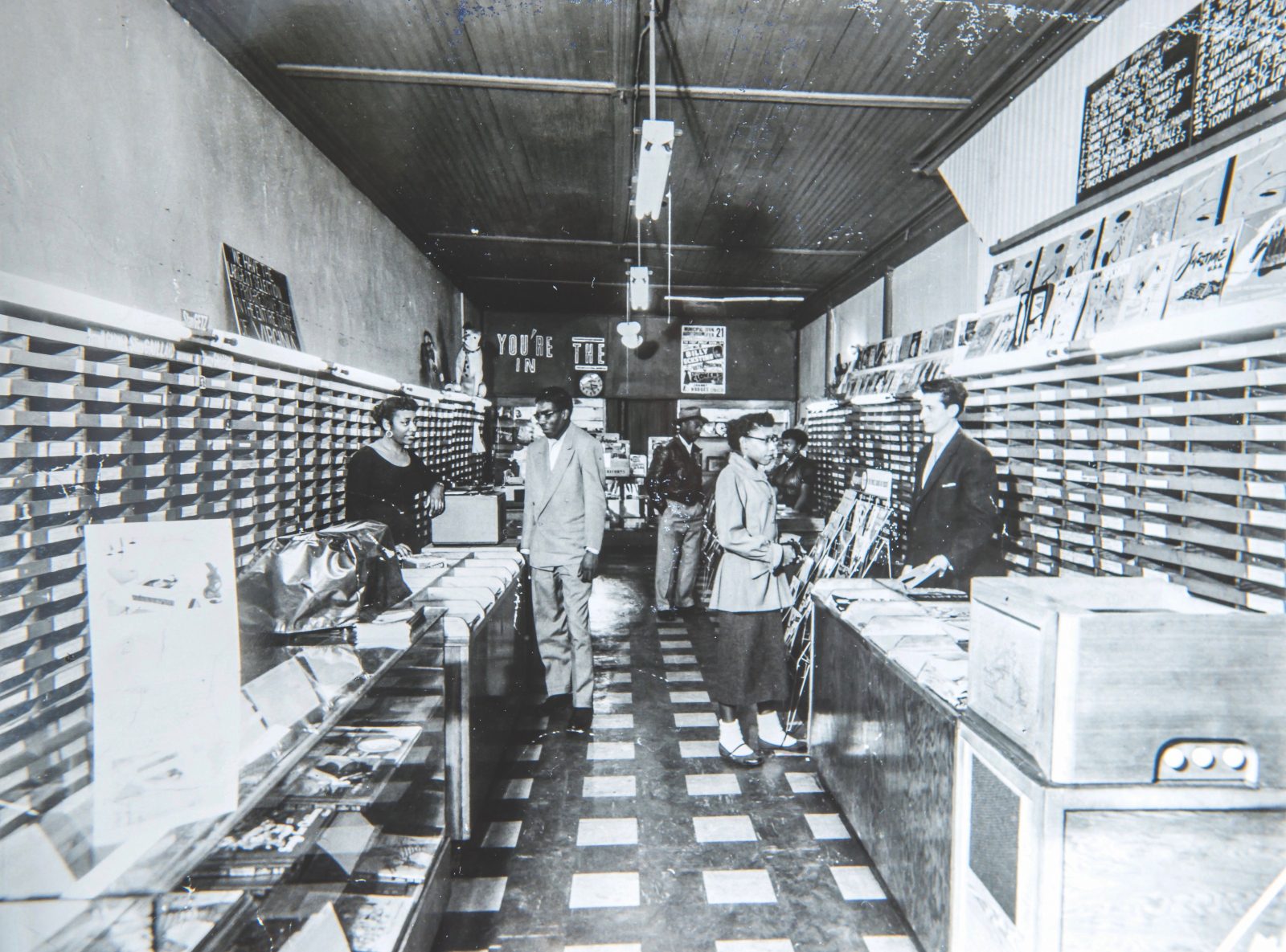 Born in Palermo, Sicily in 1922, Guida was a New York transplant who bought a rundown record store at 817 Church St. in Downtown Norfolk and renamed it Frankie’s Birdland. It became a fixture on Church Street and served as a distribution center for other regional record shops. Guida would go on to sell Birdland in 1968 to the Friedman family, who still operate it today in Virginia Beach. He later opened another popular record store, Frankie’s Got It on Granby Street. 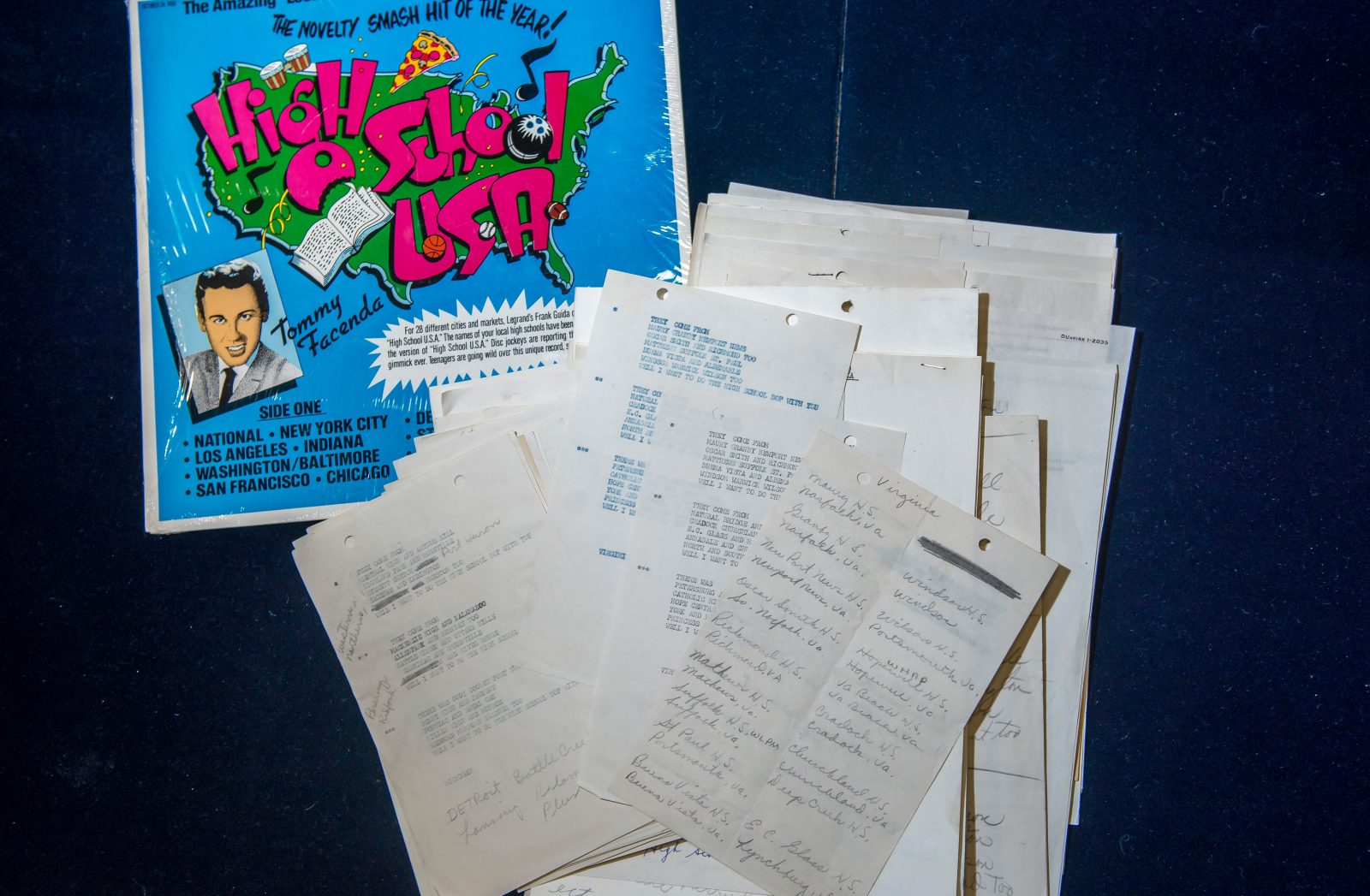 After hours Guida began recording local performers such as the Bluebeards and the Five Pearls, later known as the Sheiks, and dabbling in releasing his own records. Tommy Facenda’s “High School U.S.A.” was the first single on Guida’s Legrand label, originally recorded at Fernwood Farms in nearby Great Bridge. It was a jaunty rollcall of school names from across the commonwealth, including some that were then-closed due to desegregation battles. It featured the lead vocals of former Gene Vincent backup singer Facenda and a then-unknown Gary “U.S. Bonds” Anderson in the vocal chorus. This novelty song sold well locally, so the fledgling producer took the idea of a national regional record to Atlantic Records. “High School U.S.A.” would be completely reworked by Atlantic in New York, with dozens of different state and city-specific versions recorded and released. Facenda breathlessly namechecked a blizzard of California, Texas, Michigan and Florida high schools in recording after recording. The lyrics had been assembled from information gleaned by Guida’s right-hand man Joe Royster at the Norfolk Public Library, and his handwritten and typewritten notes, found in the ODU collection, reveal the homework. 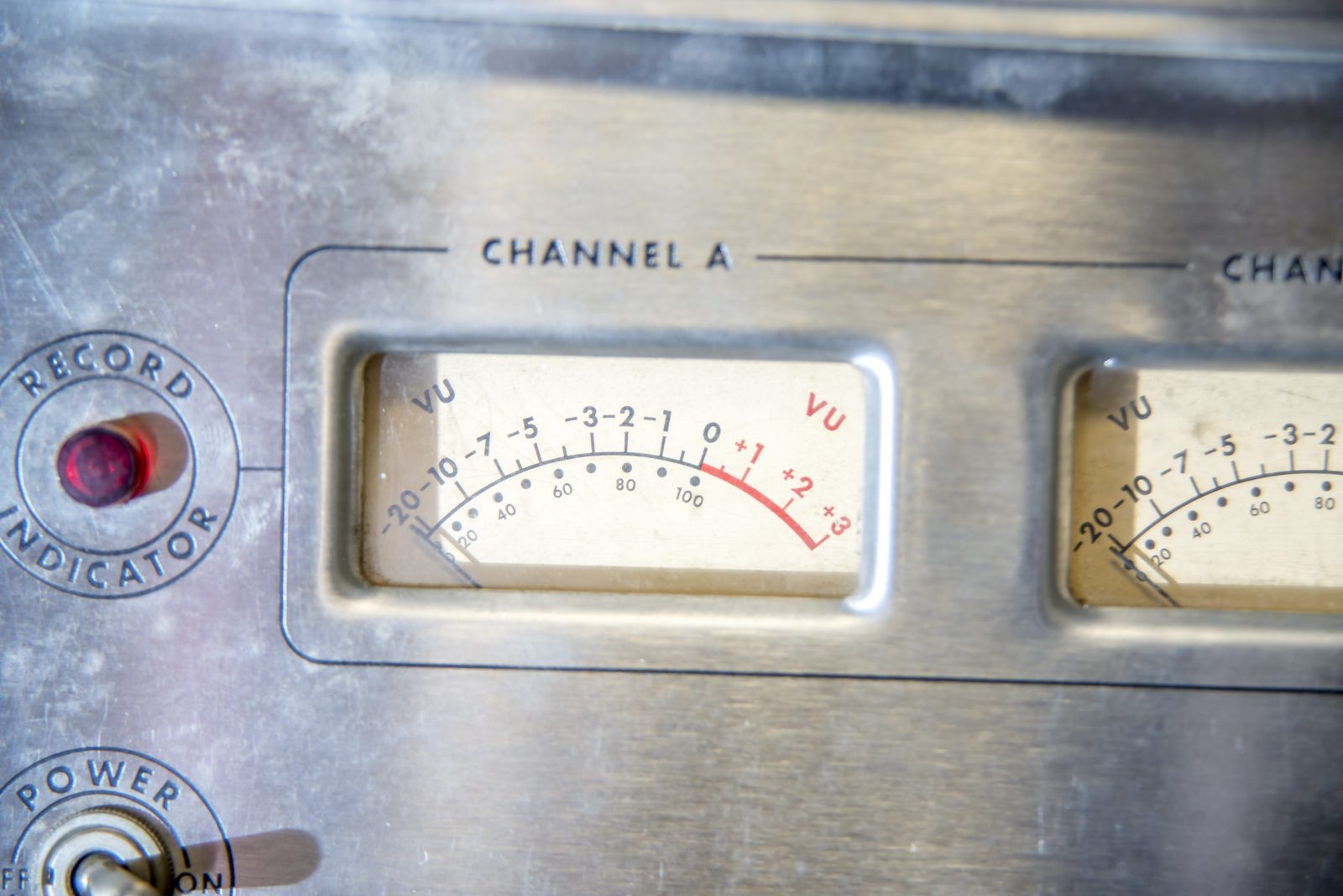 In 1959, Guida purchased the Norfolk Recording Studio on Princess Anne Road for $1,757, and assembled a local all-star band of R&B players to fill up his new space, a crew that included the masterful drummer Emmett “Nabs” Shields, bassist-tuba player Junior Fairley, pianist Willie Burnell, trombonist Leonard Barks and saxophonist Earl Swanson. They were soon to be known internationally as the Church Street Five. With a young and untested singer christened Gary U.S. Bonds, Guida’s house band would cut a blasting lo-fi tribute to another rollicking port town, “New Orleans.” The rowdy tune would, somewhat miraculously, top out on the Billboard Top 100 at No. 6 in 1960. 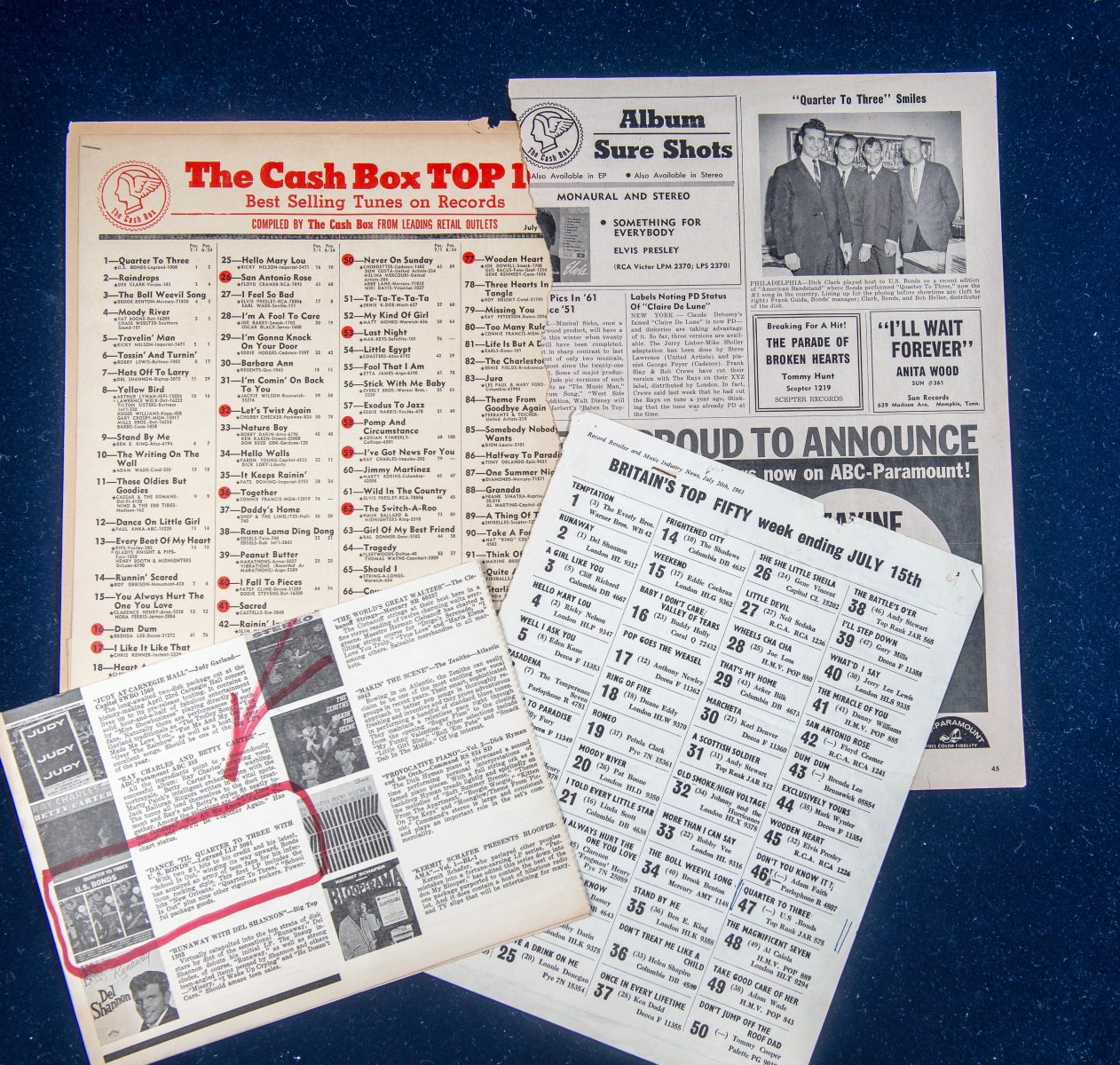 Bonds and the Church Street Five—now with saxophonist and band leader Gene Barge at the fore—would cut another blasting party platter, “Quarter to Three” in 1961. It was based on an earlier instrumental cut by Barge and the Five called “A Night With Daddy G.” This time, tiny Legrand would make it all the way to No. 1 on the national pop charts.

The rough and rancorous sound of the early “Norfolk Sound” songs is what makes them unique. “They were all electronically created,” Guida would say. To add weight to a track, he and engineer Joe Royster—a shoe salesman by day—would bring in neighborhood kids, overdub their claps and murmurs and create a party. Guida: “The recording started to sound crappy after four or five generations [of overdubs]. But you could still hear the bass drum coming through.” The bass drum on rock ‘n’ roll records just didn’t sound like this—in the forefront, bumping, incessant—until the Church Street Five hit the radio in 1960. Most engineers of the period would’ve nixed such an intrusion because of a fear that it could make phonograph needles jump. Guida and Royster either didn’t know or didn’t care.

Frank Guida discovered Gary Anderson singing with his group, The Turks, on a Norfolk street corner. Bonds recalled, “One day he came and said, ‘Hey, you guys are really good. I plan on opening up a recording studio in a couple of years …’ and sure enough he did.” As a promotional gimmick, Guida sent out Gary’s first record, "New Orleans," with “by U.S. Bonds” inscribed on the sleeve. “He wanted the DJs to think it was a commercial.” The singer would go on to record more singles for Guida than any other artist. For all of its goofy twists and turns, his discography is a rollicking ride and became a major influence on artists ranging from Bruce Springsteen to Joan Jett. Besides “New Orleans” and the No. 1 “Quarter to Three,” Bonds’ prolific string of party rockers and revved-up calypsos includes great cuts such as “Dear Lady Twist,” “School Is Out,” “Gettin’ a Groove”, “She’s Alright,” “Seven Day Weekend,” “I Wanna Holler (But the Town’s Too Small)” and a personal favorite of fans and the singer, “Havin’ So Much Fun.”

Frank Guida fell in love with Calypso music while stationed in Trinidad during World War II. Many “Norfolk Sound” hits, like Jimmy Soul’s “Twistin’ Matilda (And The Channel)” and “If You Wanna Be Happy” (which hit No. 1 in 1963) are reworked Calypso standards, honked up and set to a heavier and faster beat. Bonds even recorded an entire album of Island rewrites called "Twist Up Calypso."

Guida recorded and released singles by, among others, future beach music king Bill Deal; Virginia Beach garage rock band the Swinging Machine; and soul singer/producer Lenis Guess, who helped to collaborate with the producer on later sessions. Legrand and S.P.Q.R. were Guida’s main labels. Gary U.S. Bonds’ hits were released on Legrand, while Jimmy Soul’s were issued on S.P.Q.R. Guida named most of his labels after either Roman history—brothers Romulus and Remus—or his adopted Virginia home. From the ’50s to the early ’90s, he would issue recordings on labels with names such as Peanut Country, Norfolk Country, Norva, Norfolk International and Virginia Records. And then there was LeMonde, Got It!, Faces ’69, FGI, New Faces, Finally! and Pepe. Frank Guida’s final label was titled Soap Opera.

One fascinating recurring feature in the “Norfolk Sound” is the oncoming sonic wave of hearty voices, handclaps and analog hiss that rises up to inform the listener that a party is about to start. This unique “crowd” introduction can be found first in Andy Roberts’ “Ole Lady,” an early 1957 Calypso rewrite, but most prominently on the studio’s biggest hits and most beloved cuts, such as Bonds’ “Quarter to Three” and “Gettin’ A Groove” and Jimmy Soul’s “If You Want to Be Happy” and “Church Street in the Summertime.” As the drums kick off a big, wide beat and the band chimes in with a flourish, a raucous atmosphere of chatter and yelling continues, growing stronger while the vocalist competes for sonic space with the clamor and bass drum. Frank Guida’s distinctive Bronx voice is almost always in the foreground of these collective group cheers, sometimes introducing the song; often the guy telling you to get ready, that the nation has been enjoying a new dance craze and it’s time for you to join in.

For more on the Frank and Carmela Guida Collection, visit ODU.edu/Library/Special-Collections.