There’s a good chance if you visit a prospering restaurant, trending food truck, craft beer bar or brewery in Coastal Virginia, you’ll run into I-Heart-Food’s convivial George Culver, carrying his camera, wearing a plaid-patterned shirt and a grin beneath his famed handlebar mustache. And if you haven’t had the fortune of meeting Culver in person, you may have seen his work plastered across the Internet, with his food photography on his blog I-Heart-Food, Instagram, Facebook, local media outlets and publications (Coastal Virginia Magazine included) and at restaurants and craft breweries. Culver has cultivated an identity synonymous with a food scene, capturing moments and examining food, drink and people from our community with his lens and sharing them with thousands of followers. With his proceeding reputation, wherever the exuberant extrovert goes he seemingly strikes up conversation with strangers-turned-friends.

I-Heart-Food began in 2011, practically founded in the kitchen of Culver’s home, as he took up cooking alongside his wife of 27 years, Shelby, who he describes easily as the most photographed woman in Virginia Beach. He experimented with different ingredients, looked through recipe books and then posted pictures of his meals to Facebook while gathering some friendly flack for being such a foodie on his own social media account. So, with an epiphany Culver decided to make his own webpage, sitting in front of his computer for hours typing out URLs before emerging with the name I-Heart-Food.

Around town, the outgoing Culver took his point-and-shoot camera wherever he went, grabbing both shots of food and funny looks from patrons, all during the outbreak of craft breweries and food trucks taking hold in Coastal Virginia. “People would start to recognize me, especially because of my mustache, but at the same time, after a while I started becoming a fixture,” Culver recounts. “I just popped in and people didn’t mind if I was around, taking pictures of their stuff, and the rest is history.”

Culver was born in Bangkok, Thailand, when his American father was serving in the Vietnam War and met his mother, a native of Bangkok. His military family relocated to Virginia Beach, where his father was stationed primarily between Fort Story and Fort Eustis, specializing in military transportation vehicles. Occasionally his father took him out on the water by hovercraft to see dolphins. During Culver’s salad days in the 1980s, the 16-year-old made bread in flowerpots at Spinnaker’s at Lynnhaven Mall, a destined adolescent hangout spot, where he would meet his future wife Shelby, a friend of a friend. “I remember she kept looking at me, and I eventually looked at her and said, ‘What are you looking at?’” The budding romance took off when Culver noticed Shelby had a car and a job. “I said, this is sweet; this is a good setup,” Culver jokes.

At the age of 17, after dropping out of First Colonial High School, Culver obtained his GED, joined the Army as a Cavalry Scout and went to basic training in Fort Knox, Ky. He was away when Shelby had their first child, their daughter Marleigh, learning of the news of the birth when he received a package at the Fort’s post office. “I remember opening it up and seeing a little picture of a baby, and I was like, ‘Who the hell is this?’” Culver chuckles. “I was just so preoccupied getting yelled at all the time, being run around ragged by a drill sergeant, it just didn’t really click that easily.”

In May of 1990 Culver left Advanced Individual Training and was stationed at Fort Bliss, Texas, in the 3rd Cavalry Regiment, developing a finesse to maneuver Bradley Fighting Vehicles through sand and other terrain. They’re sort of a miniaturized and more mobilized version of a tank, yet still massive.

Thereafter, Culver served in Desert Storm and Desert Shield before leaving the armed services in 1996 and spending three years living in Germany with Shelby, Marleigh and the couple's son, Chayce. George and Shelby say these were the best three years of their lives as they traveled to the Czech Republic, Poland, France and Austria and East Berlin after the wall was toppled. “I think that’s something that really made a huge impact on our lives,” Culver shares. “Leaving the states, moving to a foreign country and just experiencing a whole different culture, seeing different people.”

Their immersion into German culture exposed Culver to a whole new world of food and beer. He particularly took a fancy with the weizenbier and dunkelweizen, “I thought this was great; I can’t believe this is beer,” Culver exclaims. “Before I went to Germany, fancy beer for me was MGD, Miller Genuine Draft.”

Expanding their palate and reaching for finer things, food had changed quite a bit for a family living on a budget of beans, powdered potatoes and cheap hamburger (Culver admits he’s still nostalgic for Hamburger Helper). “Shelby and I are always very interested eaters, always willing to try something once. I hated oysters, but I’ll eat hundreds of oysters in a sitting if someone sat there and shucked them for me.” 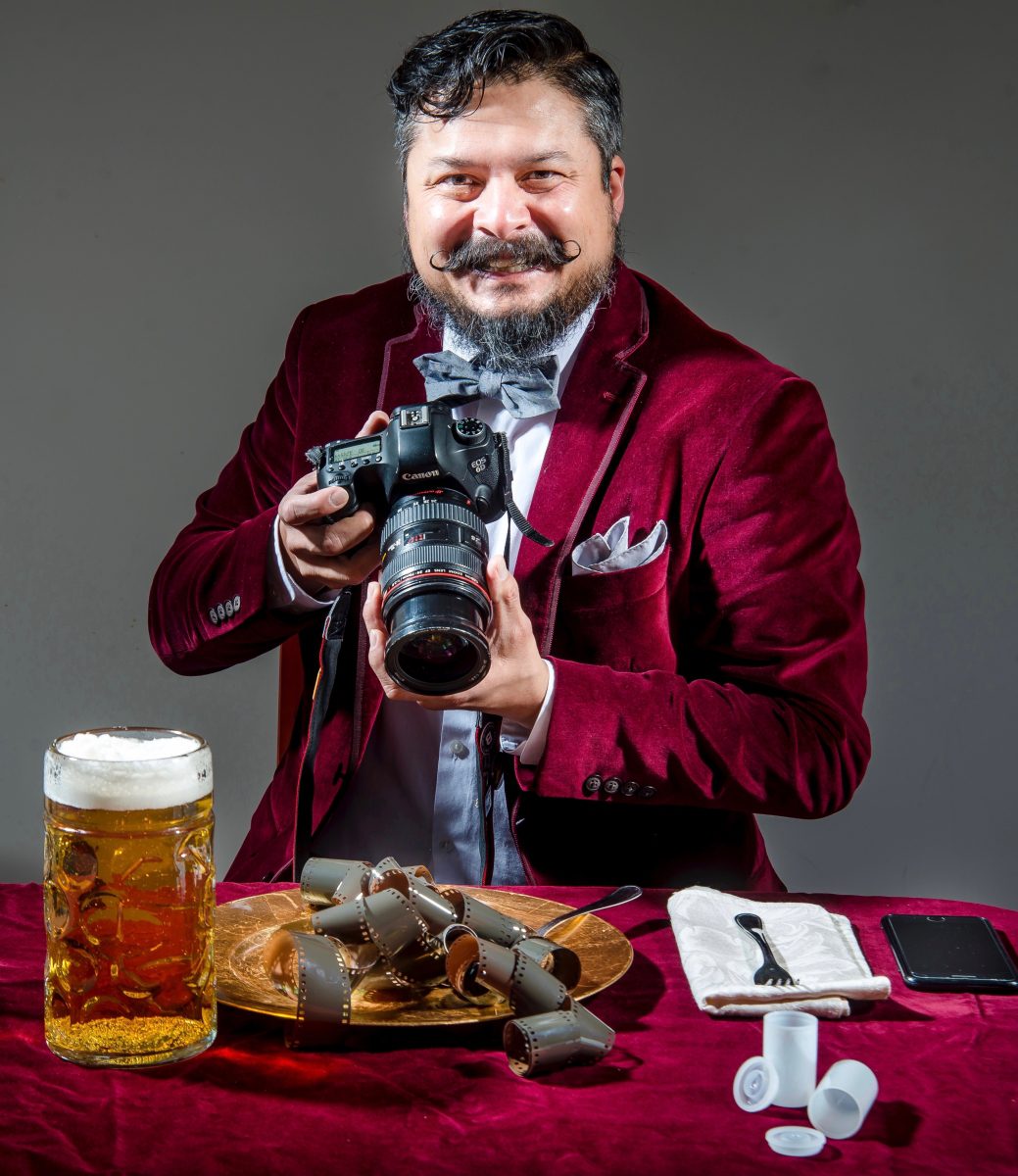 Culver’s sense of taste and flamboyant style—including his mythological mustache—have all attributed to his appeal to his fanatical food followers. Originally having a try with facial hair by growing a goatee that later went crooked, the handlebar stuck around when someone bought him a beer out of appreciate for the ’stache. “There’s a lot of great mustaches in the area, and I go to some of the Hampton Roads Beard and Mustache Society meetings, but I never compete because I think it would hurt my ego,” he humorously reveals. He credits Shelby for dressing him for 30 years, with a wardrobe of velvet jackets and bowties.

Culver takes an approach with his work on I-Heart-Food to ensure he has his own voice, always mindful of having fun, whether he’s circulating around a bar, poking his head into the kitchen or shooting the breeze with patrons. “I enjoy really candid shots,” he explains. “I like to capture the mood and how people would see it if they were actually sitting there.”

Understanding that living in Coastal Virginia has helped shape his work, he has a certain respect for restaurateurs, esteemed chefs and craft brewers. “You have other sites that do plenty of complaining and sharpshooting, and I don’t want to be one of those people.” In a digital age rife with confrontational, negative reviews of food, Culver avoids the skepticism and maintains a genuine outlook. “I’m very humbled, and I appreciate the fact that I’m welcome into a lot of restaurants and breweries in the area. I’ve gotten to see the scene grow from infancy.”