As running back for the James Madison University Dukes, Khalid Abdullah’s college career is one for the record books. His performance on the football field shattered records for rushing touchdowns (41), total touchdowns (45) and scoring (270). In January, he claimed MVP status after running 101 yards and scoring two touchdowns, helping lead the Dukes to victory in the FCS National Championship game against Youngstown State University. Buoyed by the support of his family and thousands of fans, the 21-year-old football star is on the rise as he works toward his dream of one day playing in the NFL.

But Abdullah’s vision for the future wasn’t always so rosy. Before he was a 5’10”, 220-pound running back, Abdullah was a 5-year-old little boy, fleeing New York in the middle of the night with his mother and three older sisters. His mother’s relationship with his father had crumbled, and his mother decided to return with her children to her hometown of Newport News. Loaded into a white car, his belongings stashed in a black garbage bag, Abdullah left New York behind to face an uncertain future.

The family went to a shelter their first night in Newport News, but Abdullah’s mother didn’t think the overcrowded facility was safe enough to let her children stay there. Instead, the family slept in the car until they moved in with relatives a few days later. As the family settled into life in Coastal Virginia, Abdullah turned to sports. He ran track and played basketball, but his first love was football. “I loved football because it was a team sport I could play with my friends,” he says. “We could put on the pads and play a real game together.” Abdullah daydreamed about playing at the highest level in the NFL, just like his hero, Adrian Peterson, running back for the Minnesota Vikings. Life in the neighborhood wasn’t all fun and games, though. As Abdullah grew up, he watched classmates get involved with drugs, and some of them paid the ultimate price with their lives. “All of those bad things hit real close to home,” he says. “I didn’t want to choose that life for myself.” 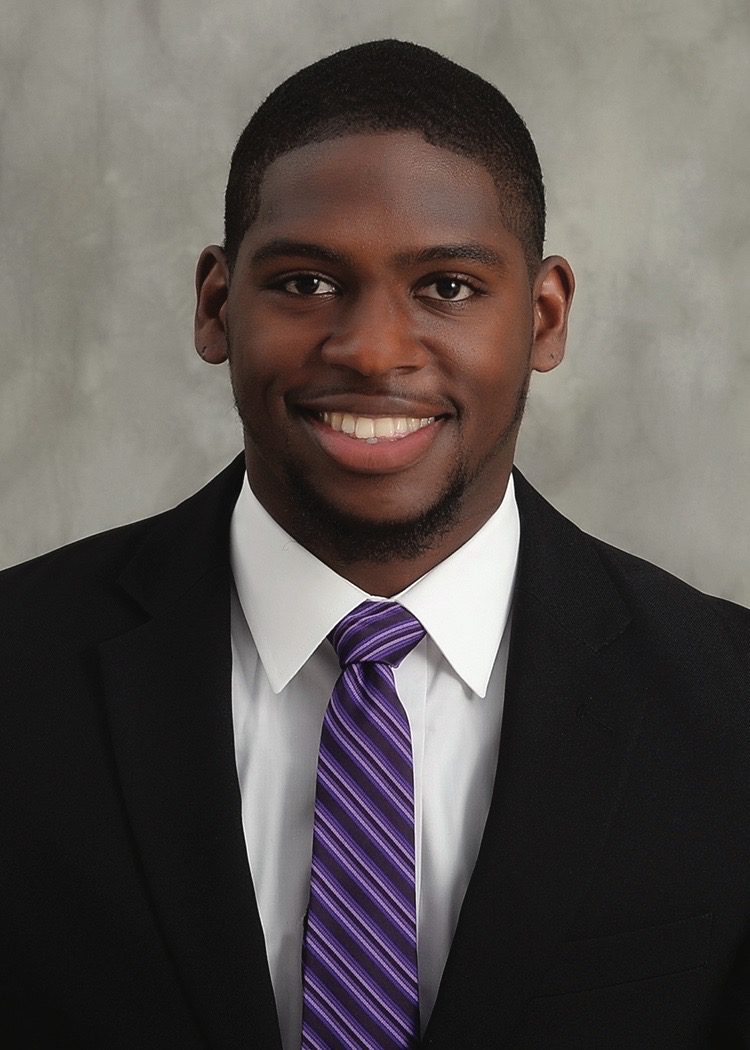 Abdullah wanted to attend college, and when a scout from JMU offered him an athletic scholarship, he didn’t hesitate to take it. The Heritage High School grad headed to Harrisonburg and faced a whole new set of challenges as a student-athlete, juggling the competing obligations of classes, team meetings, practice and traveling for games. “I had to learn real quick how to acclimate,” he says. “The schedule is crazy. You have to cut up your time like a pie so you can fit in everything that needs to get done.”

The long hours and sacrifice were worth it because when Abdullah steps onto the field, he is in his element. His first stop is always the back of the end zone, where he pauses to pray. “I pray to God for my health and for my teammates,” he says. “I thank God for the opportunity to be able to do what I’m doing.”

The cheers and screams of the fans in the stands echo in his ears as the game gets underway, but he strives to find a balance for his emotions. “I don’t want to let myself get too high, because then I might become overconfident and make a mistake during a play,” he says. “I also don’t want to get too low and lose that sense of momentum.” For Abdullah, focus on the field is key. “I don’t want to mess up my mind,” he says. “I always tell myself that every play is a new play.” Before running off the field, Abdullah visits with his family and friends in the stands, hugging his mom and kissing his nieces and nephews.

The high point of Abdullah’s college career came during his senior year, when the Dukes were crowned FCS National Champions after defeating the Youngstown State University Penguins in early January. It was the second time in the JMU football program’s history that the team had clinched the title. “I thought for sure we would get knocked out early and that I would be sitting at home watching the game,” Abdullah says. But instead, he hoisted the trophy on the field and celebrated alongside his teammates with a parade back home through the streets of Harrisonburg. “Winning the championship was the whole reason I played college football,” he says. “It had been a long season, and we had battled some tough teams, but our hard work paid off.”

Set to graduate from JMU in May with a degree in sports and recreation management, Abdullah’s hard work is just beginning. He is taking part in a weight-lifting internship in Newport News and anxiously awaits the call letting him know if he will travel to Indianapolis to showcase his skills at the NFL Combine. If selected, he will join hundreds of top-ranking college football players, all competing for attention from coaches and scouts in anticipation of the NFL Draft. Although he remains optimistic about his shot at the big time, Abdullah is also practical. “If I don’t get selected for the Combine this time around, I’ll keep working on getting into the pros,” he says “I’ve got the rest of my life to look forward to.” 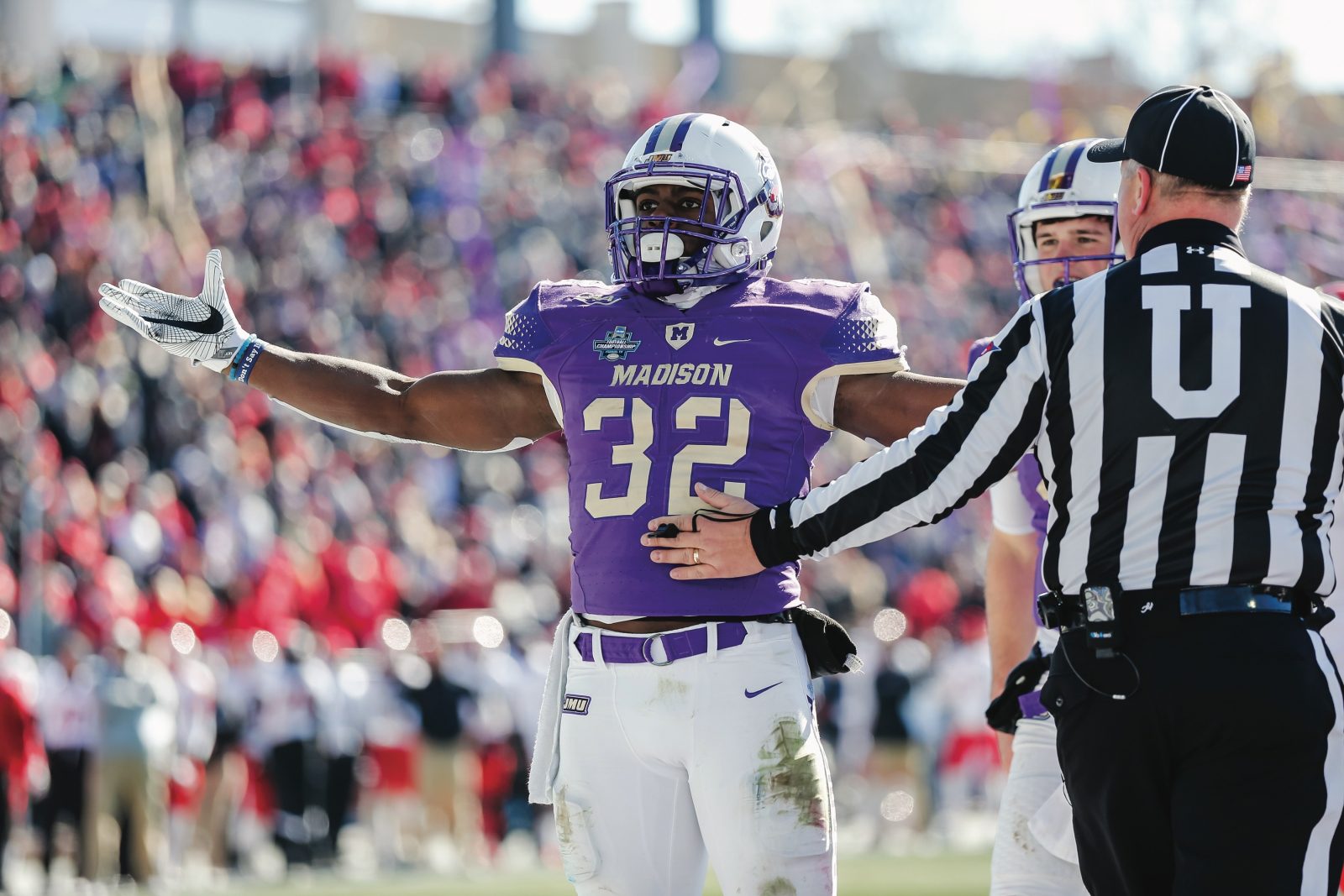 Abdullah says the tough times he faced growing up gave him the courage and the strength to go on, no matter what life throws his way. Struggle, change and determination have been the hallmarks of his life, and he has yet to back down from a challenge. Seeing his picture above the fold on the sports page of his hometown newspaper, The Virginian-Pilot, and hearing sportscasters giving a rundown of his record-setting performances on the evening news is further proof that the kid from Newport News is on his way. “I have an amazing platform to give back and showcase my community,” he says. “So many kids think there is only one way out of a bad situation, but I want to show them there are different avenues and that they can take the road less traveled.”