Chef and Co-Owner of My Mama’s Kitchen, Moe Stevenson, Peppers his Food with a Taste of Family and his Personal Experiences 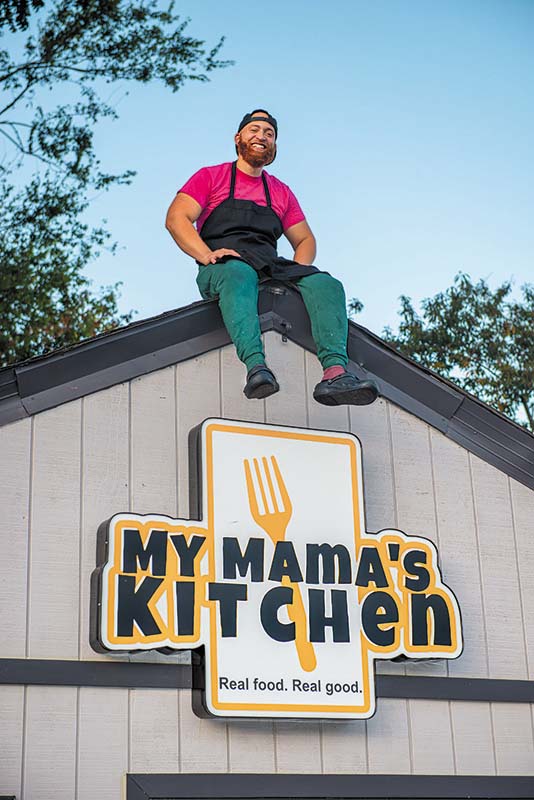 If comfort food were an art form, Motier Stevenson could be hailed as Coastal Virginia’s Leonardo da Vinci. Stevenson is chef and co-owner of My Mama’s Kitchen, a homey restaurant near Norfolk’s East Beach dishing out Southern-style cuisine with a smile.

Stevenson, known as “Moe,” began his culinary career in an unlikely way—during a semester hiatus as he pursued a pre-med psychology degree at Xavier University of Louisiana. During his semester off, he left New Orleans and returned home to Norfolk where he was hired at Hell’s Kitchen on Granby Street.

“That was actually my first real cooking job—my first time being on a line and everything. I just remember doing it and loving it,” Stevenson recalls. “I had already loved to cook but I’d never done it on that kind of scale. The fact that I was actually good at it was very refreshing and very cool.”

Despite his passion for cooking burgeoning during his time at Hell’s Kitchen, Stevenson did not predict he’d make a career out of it. He returned to college but never stopped cooking, whipping up nightly dinners for his roommates.

By chance, Stevenson’s mom, Berrie McKissic, found out about a cozy coffee shop that was up for sale, and in December 2012, Stevenson, alongside his mom and brother, Ashanti McKissic, opened My Mama’s Kitchen.

“To be honest, it was just me taking a chance on myself,” explains Stevenson. “I had been working for people over and over and I just really wanted to work for myself. I wanted to hold my own and be my own boss.”

While owning a restaurant is always a risk, Stevenson and his family were confident in their food, using their beloved chicken wings as a base for My Mama’s Kitchen’s menu. Made fresh to order and coated in a house-made sauce, Mama’s Chicken Wings have been a favorite for decades, and not just in our region.

“We used to sell wings on the corner of Lennox Avenue in Harlem, up in New York, when we were there,” Stevenson says, reminiscing on his childhood. “Every weekend, it was something for my mom to earn extra money for us.”

Stevenson praises his mom, who became affectionately known around the neighborhood as “the chicken lady,” not just for her wing recipe but for being “the hardest working person I’ve ever met in my life.”

“She already had two jobs, but on the weekends, we’d be frying up chicken on the corner. Every weekend, we would sell out.” 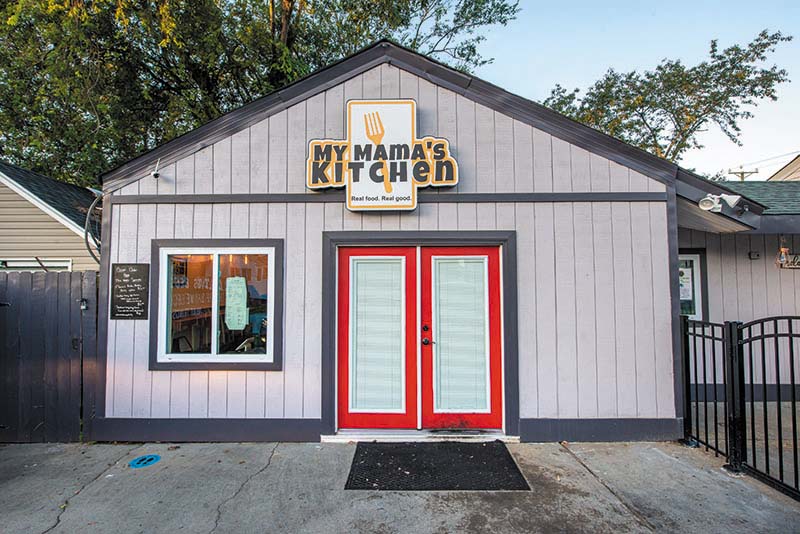 Stevenson adapted more than just his mom’s chicken wings for My Mama’s Kitchen. A few other family recipes also made the cut, with Stevenson adding his own touch to them.

“I’ve taken some of the recipes my grandma has given me, and I’ve given it my own twist. I think I’ve improved upon a couple of them too. I don’t tell them, but I think I have,” Stevenson jokes.

From his grandma’s collard greens, dad’s rice and peas and the iconic corn bread to desserts like the sweet potato pie and his aunt’s strawberry smash, Stevenson wanted to give diners a taste of his family. In addition to family recipes, Stevenson pulls influence from his time in New Orleans, with catfish, shrimp and crab cake po’ boys that bring Creole flavors to Coastal Virginia.

“This is food that’s made with love and care. It’s just so people know they’re getting a part of us in everything that they order.”

Amid the coronavirus pandemic, Stevenson and My Mama’s Kitchen received an outpouring of community support. The restaurant was set to undergo interior renovations at the end of January, reopening the new dining area in March. COVID threw a wrench into those plans, but fortunately, a majority of My Mama’s Kitchen’s orders were carryout prior to the pandemic.

“We’re actually making more money now than we did when we were open before, which is a fantastic thing. Sales have grown since COVID hit,” says Stevenson

Through this, the restaurant has not only sustained success through the changing times, but it’s growing as well. Stevenson obtained a food truck permit in September and kicked off his latest venture with an event at Smartmouth Brewing. Seeing the popularity of the mobile My Mama’s Kitchen, even more breweries are reaching out for Stevenson to set up on-site and serve his signature comfort food and wings.

“It’s really been a blessing. It’s trying times, but people are keeping us busy and keeping us open. I’m really grateful for that.”