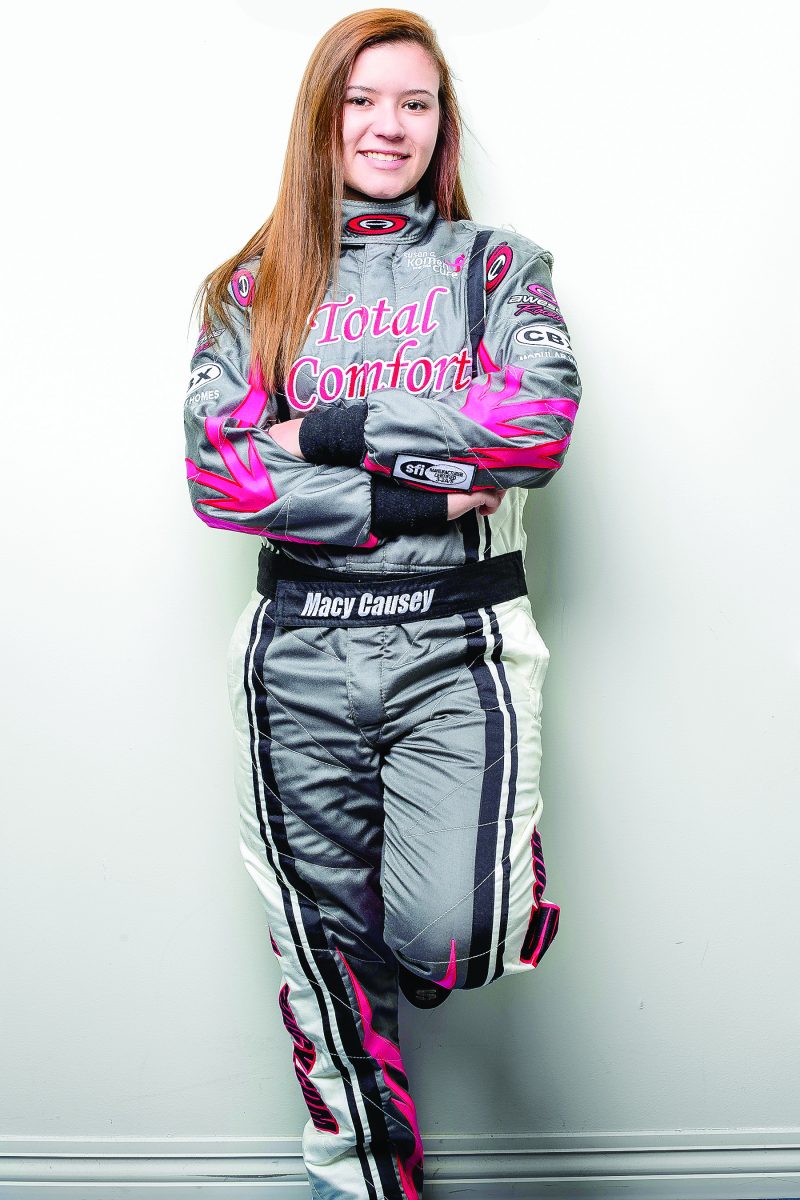 Macy Causey, a 16-year-old York County native knew from her earliest years spent at the track that she wanted to be a professional driver. Ever since, she’s been off to the races.

Macy is a third-generation driver in her family’s line of racing. Her grandmother, Diane Teel was the first woman to win a NASCAR race at Langley Speedway in Hampton in 1978. Both her parents, Rette and Dee Causey, took their talents to the racetrack as drivers, too. With her mind made up to get behind the wheel, Macy has broken track records and won championships with late model stock cars. As a team member of REV Racing, her success hasn’t been short-lived either. She was invited to NASCAR’s Drive For Diversity at age 14, honored as Rookie of the Year at Langley Speedway in 2015 and earned the NASCAR Young Racer Award in 2016.

Though the achievements have come fast, Macy takes a steady approach to succeed at each track, gradually learning new things and finding communication with her crew team to be key to pulling ahead on race day. “I want to be in the Cup Series one day, but I also want to make sure I take my time with each level. I don’t want to go straight there; I want to work my way up.”

Challenges present themselves beyond the speedway, as Macy has proven it takes some grit to get ahead. Regardless of what’s said about her, she realizes she can’t let it get to her. “It all comes with the success you have. People realize that young girls or women can race just like any other person can,” she asserts. Macy was named one of six of NASCAR’s Drive for Diversity drivers in 2017, and she figures it’s exactly what racing needs. “You have a male-dominated sport, and at the same time, you have to think about how many different cultures and backgrounds are now coming in to NASCAR.”

Being a racecar driver at such a young age has taken some adjustment in itself. While other young motorists at Macy’s age are just learning how to drive and obtaining their licenses, she’s already finishing as a leader in competitive races. As a result of her move to train in North Carolina, she’s had to alter her school schedule but maintains that school is indeed a priority. “Being homeschooled makes everything a lot easier, but I definitely want to get college out of the way before I go any further with racing.”

Macy keeps her focus to persevere, and positive messages of support from fans in the community have been a driving force of motivation. She also credits the decisions she makes off the track to helping her find her way. “You have to think about the future and not just at the moment.”