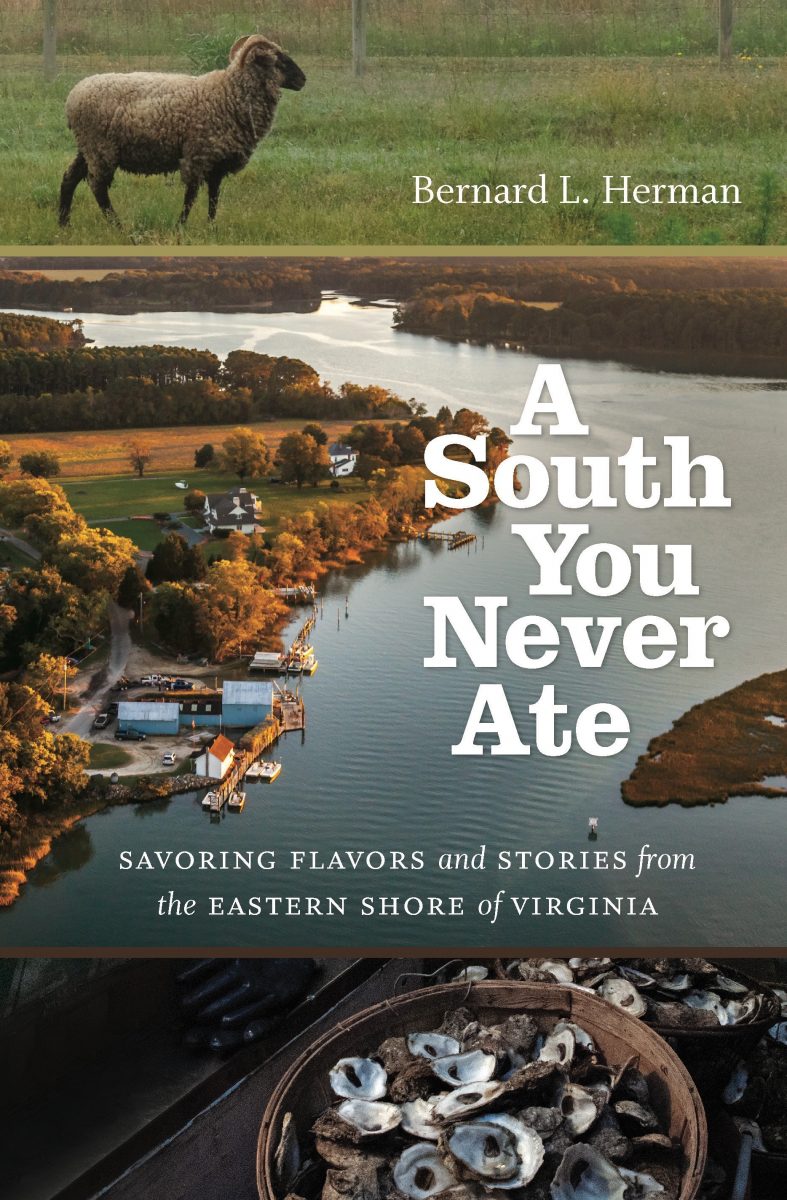 ’Round sunset, lights on the Chesapeake Bay Bridge-Tunnel appear like twinkling diamonds. Bernard L. Herman illuminates the land they lead to, Virginia’s Eastern Shore, in his new book A South You Never Ate (UNC Press, $28). A gastronomical Margaret Mead, he spotlights the communities of this slender 70-mile stretch between bay and ocean via foodways, trawling gems hidden to those whizzing by on Route 13.

Meticulously researched, as you’d expect from the George B. Tindall Distinguished Professor of Southern Studies and Folklore at the University of North Carolina at Chapel Hill, it’s also affectionately written. Although not born on the Eastern Shore, Herman moved to a house called Saltworks on Occahannock Neck in the 1950s, married his wife Rebecca on the seaside above the village of Oyster and returns often to tend to his oyster beds. He self-describes as “a neighbor known to cook and eat just about everything.”

Hence a thick, rich compilation—wait, make that contemplation—of the layered and blended cultures (indigenous, European, African, Latin American and more) shaping these shores. Locals’ tales trump pedagogy as Herman captures the voices of watermen, farmers, immigrants and everyday folk (like Claudia Ballard recollecting her mother’s clam fritters: “She could make those fritters like lace. Do you understand what I’m saying?”) and preserves them the way Marilyn Sharp cooked down figs to jar up (she rhapsodizes: “Let me tell you, it’s some kind of good!”).

His book follows a logical sequence beginning with familiar ingredients granted an Eastern Shore twist (strawberries, spot) then flows into subjects unique to these parts (drumhead soup). It covers the complex lexicon of crabs, the near-extinction of lattice-crusted oyster pie and the history of the Hayman potato (related by those so connected to the land that they personify the special spud).

All is not as sweet as the Wachapreague Fireman’s Carnival where cake wheel winners “…walk around the carnival grounds proud, just like that little kid with that giant teddy bear.” There are allusions to illicit hauls and a drowned body at the south end of Orville Shoal. But what abides are tastes, traditional and evolving.

Recipes are largely handed down in narrative style, meandering as a tidal creek, though each chapter wraps with a chef’s recipe for home cooks such as Amy Brandt’s sweet potato biscuits. Prior chef-owner of Virginia Beach’s Lucky Star, Brandt is now a caterer in Cheriton. She’s vital to the Eastern Shore of Virginia Foodways, a group co-founded by Herman along with Mills Wehner (Chatham Vineyards), Heather Terry Lusk (H.M. Terry Co.), and Tom Gallivan (Shooting Point Oyster Co.) to “share the culinary heritage of a Southern terroir unknown to most.”

For as Danny Doughty, an artist who grew up in Willis Wharf, implores while extolling blow toads, “…the caviar of Eastern Shore living! I mean, you had them, you were in high cotton!…It was part of our little history that is going to be forgotten if somebody doesn’t get it down to carry it on.”

See more here for a recipe for Crab Tamales featured in A South You Never Ate.