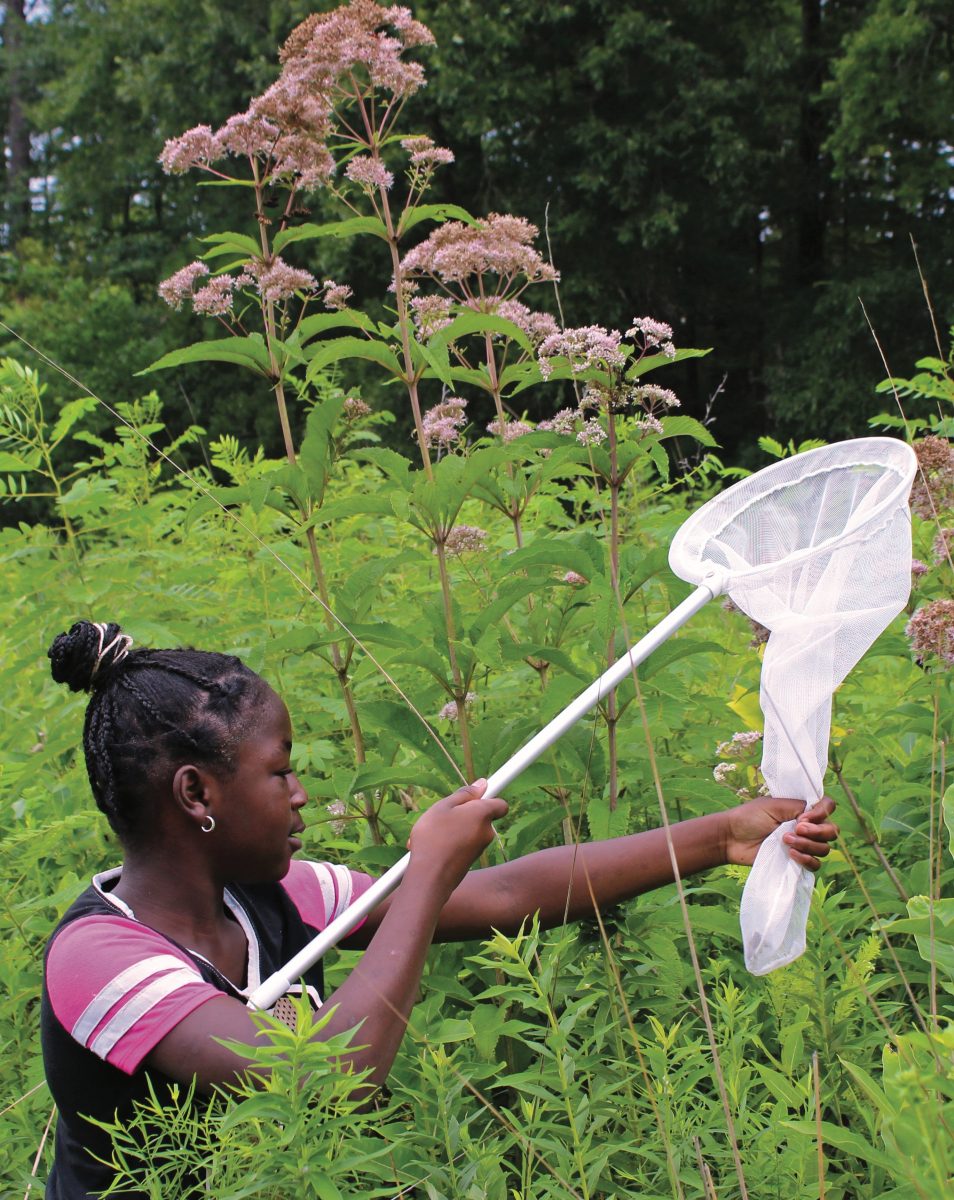 Net in hand, Jennifer Davis stalks toward a tall clump of flowering milkweed. “Hang on,” she says. “I might be able to catch this one.” The net drops, and Davis steps back onto the trail amid a chorus of eager young voices. “Did you get it?” “You still have it?”

Immediately surrounded by kids, Davis kneels to extract her quarry: a monarch. She gently places the fluttering black and gold migratory butterfly into a mesh carrier and holds it up for everyone to see.

“Has anyone seen these in Mexico?” she asks.

“They spend the winter in Mexico,” Davis explains.

Angel asks to carry the butterfly cage. The other kids pick up their own nets, and excited squeals and shrieks once again permeate this wildflower meadow.

An hour earlier, a local Northampton County school bus rumbled down an unpaved lane at Brownsville Preserve and stopped in front of The Nature Conservancy’s office on the Eastern Shore of Virginia. On this predominantly rural finger of land separating the Chesapeake Bay to the west and the Atlantic Ocean to the east, Brownsville serves as mainland headquarters for the Conservancy’s Virginia Coast Reserve. Most of the reserve’s 40,000 protected acres is comprised of pristine marsh and barrier islands just off “the seaside,” as residents call the ocean-facing edges of the peninsula.

Davis, the reserve’s education coordinator, strolled from the office deck to greet some 40 children of migrant farm workers and their teachers filing off the bus. The students range from pre-K to middle schoolers, and most of them were born in the United States and speak fluent English. Their families, however, hail from throughout Latin America, primarily Mexico, but also Honduras, Puerto Rico and Haiti. While the parents are working 12-hour days on the Eastern Shore’s potato and tomato farms, these kids are enrolled in Northampton’s summer Migrant Education Program. Today’s field trip is an extension of the free, hands-on learning experiences that the Conservancy provides to local students during the school year.

For most of these children of migrant workers, Smith makes clear, the trip to Brownsville was nearly as complex as the epic migration of the monarch butterflies they pursue at the preserve. Their year begins in Florida, spring takes them to South Carolina, and they typically arrive in Virginia around the Fourth of July. They may remain well into November before the annual cycle begins anew, depending on the weather and the duration of the Eastern Shore’s tomato harvest.

Virginia tomatoes account for at least $34 million annually in direct sales, and most of this crop is grown on the Eastern Shore. The harvest is a vital component of the record $70 billion that agriculture now generates for Virginia’s economy, as then-Governor Terry McAuliffe announced last August.

The children of the migrant labor force helping get this commodity from the fields to our tables bounce not only from state to state as harvest seasons progress but also from school to school. Like the six other migrant programs across Virginia and similar programs in all 50 states serving a half-million kids, Northampton’s Migrant Education Program specifically targets any resulting gaps in learning, especially in reading and math.

And because the kids travel in buses and live in farm camps, Smith says that the program also strives to provide experiences alongside time in the classroom. “Any kind of experience you provide really helps with future learning,” she says.

“The migrant children tend to be timid socially at first compared to local students, but they also show less initial fear of the natural world,” says Davis. That’s likely because the kids spend most of their evening and weekend free time playing outside, as their spartan living quarters are largely reserved for sleeping.

Today, excitement rippled through the bus as soon as the returning students realized their destination, according to teacher Etta Robins, a 13-year veteran of the program. “There’s so much for them to catch,” says Robins, looking out over Brownsville’s meadow as kids buzz around her, chattering about their discoveries.

Beyond seeing up close what kinds of spiders, toads and flying insects live here at Brownsville, the kids take home another key lesson, says Robins. “We catch these creatures, but then we let them go,” she says. “We talk about the fact that we need them to pollinate our food.”

She points to twins Rocia and Sofia, who entered the program four years ago as pre-K students. Back then, they would cling to Robins as a maternal presence, someone who knew them by name and made them feel welcome every morning. “To see how much they’ve grown socially and academically …” Her voice trails off as she watches the girls scamper after more butterflies. 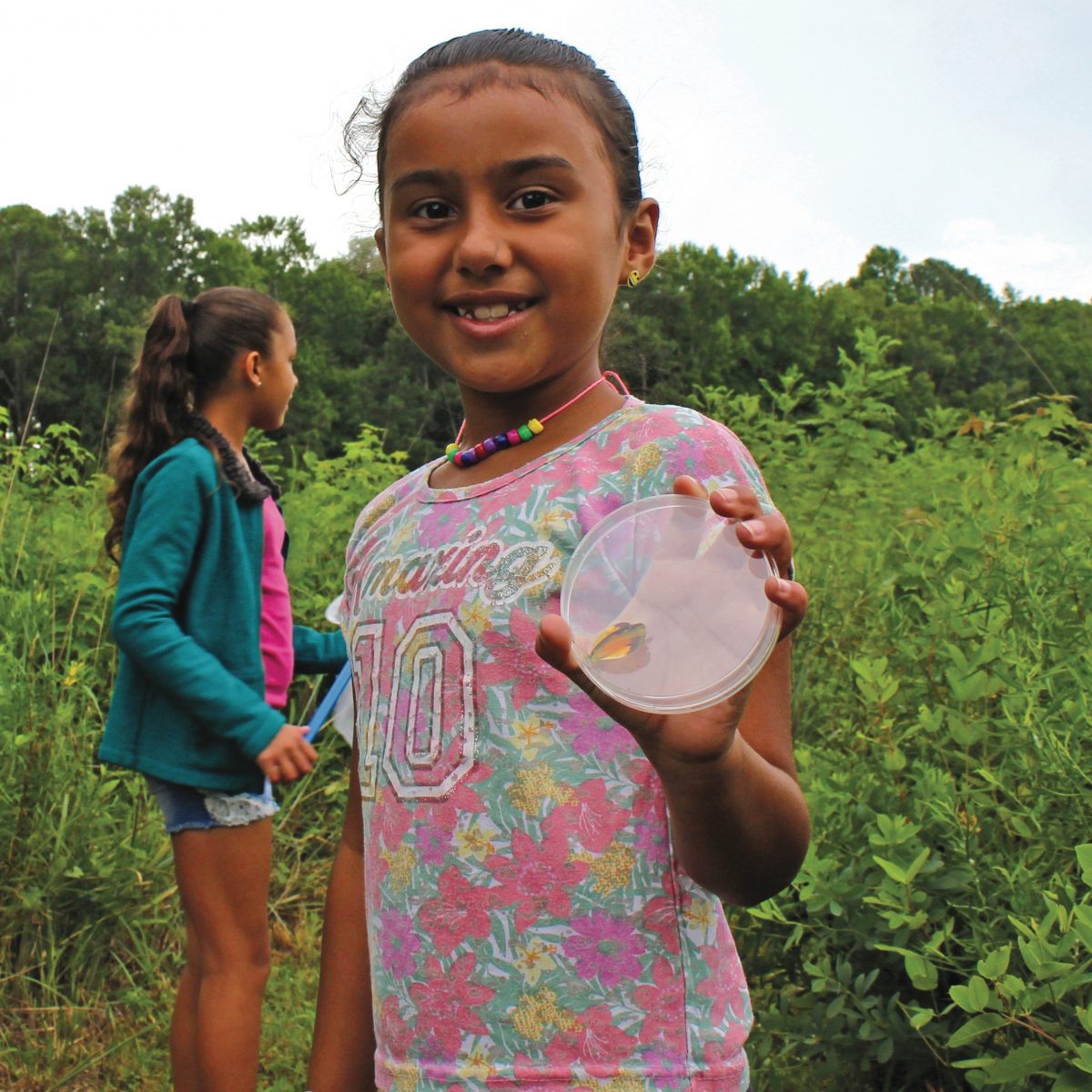 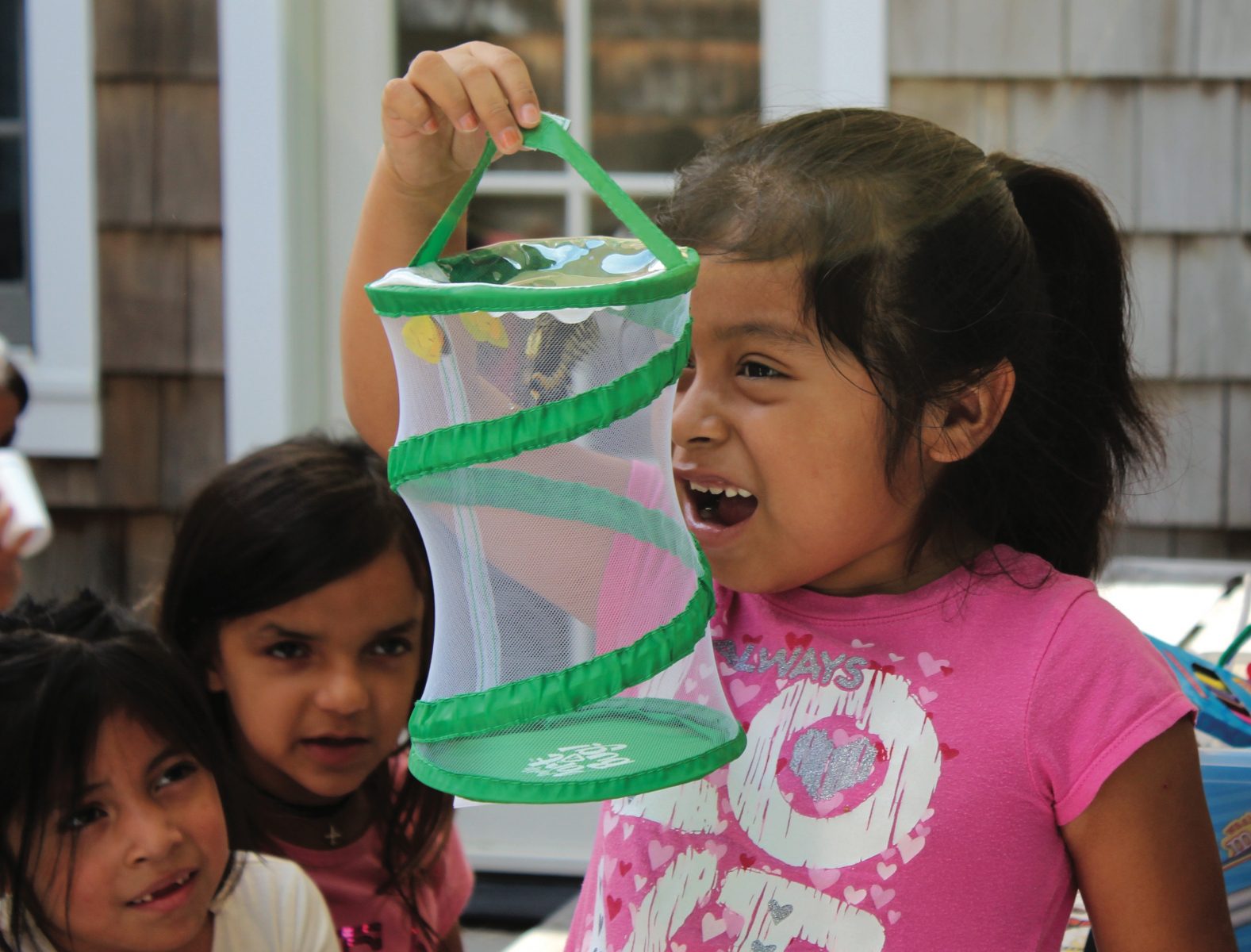 “The Nature Conservancy’s education program here at the Virginia Coast Reserve is only a year and a half old,” Davis says. “Our main program focuses on public school kids here on the Eastern Shore in the fifth grade, seventh grade and high school biology—the 10th-grade classes.”

Along with the office and adjacent meadow of native wildflowers, this historic farm-turned-nature-preserve features 1,250 acres of outdoor classroom, complete with forests, creeks and salt marshes.

Teachers collaborate with the Conservancy on the content of field experiences and corresponding classroom materials and instruction. This partnership ensures that the environmental curriculum aligns with the Standards of Learning (SOL) prescribed by Virginia’s Department of Education.

From the Conservancy’s perspective, physical separation leads to a lack of emotional connection to the extraordinary coastal wilderness spanning the horizon. According to Davis, the organization sees community engagement as critical to successful conservation, so it is investing in environmental education and covering costs to local schools, including transportation.

Davis explains that the migrant kids represent an integral part of the Eastern Shore community and one which is typically underserved. “Having someone outside their school and their immediate circle spend time with them to foster their connection with nature—that is a great experience for them and for me.”

“They’re so bright, … and they’re really special to me,” Robins says of the migrant students she teaches. She hopes that experiences at places like Brownsville Preserve will open their eyes to a world—and a future—beyond the farm. 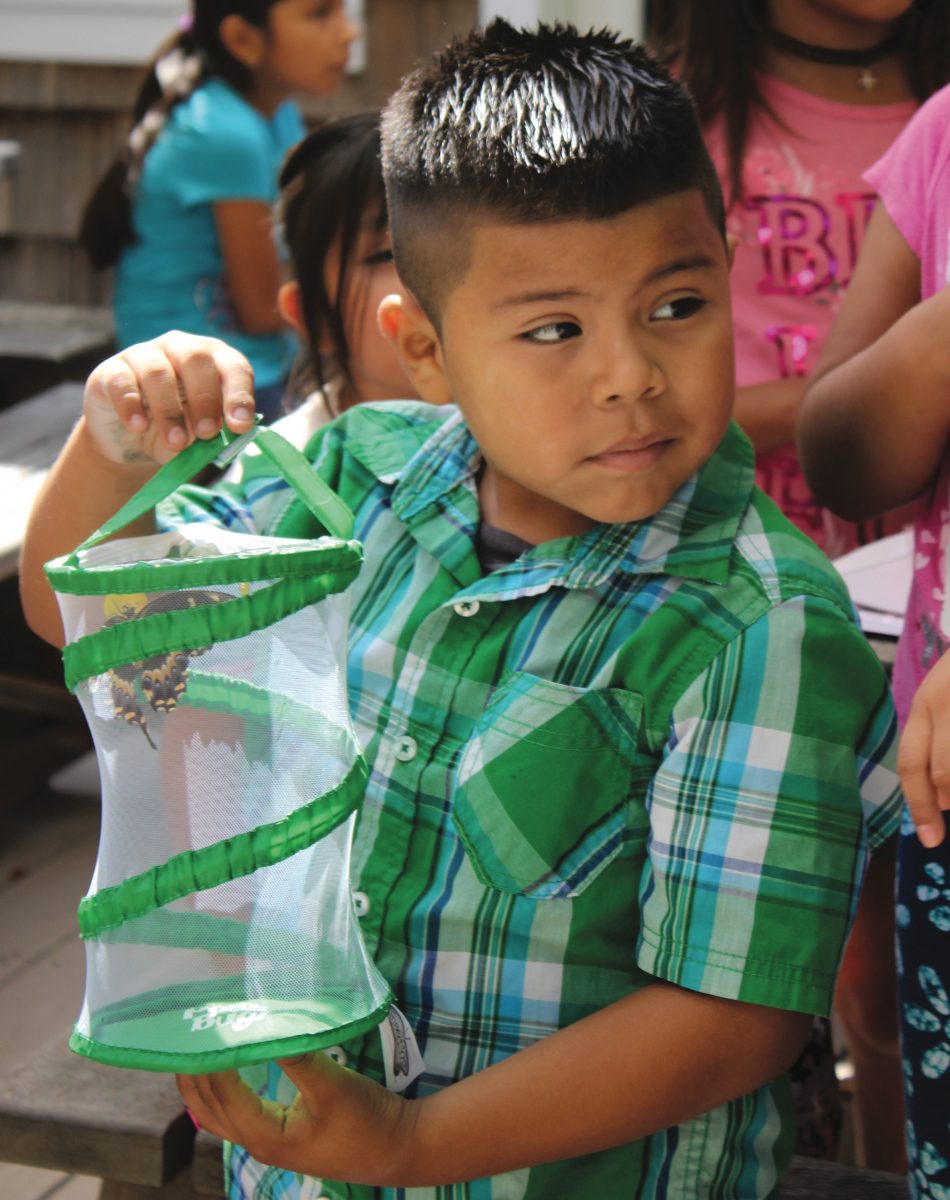 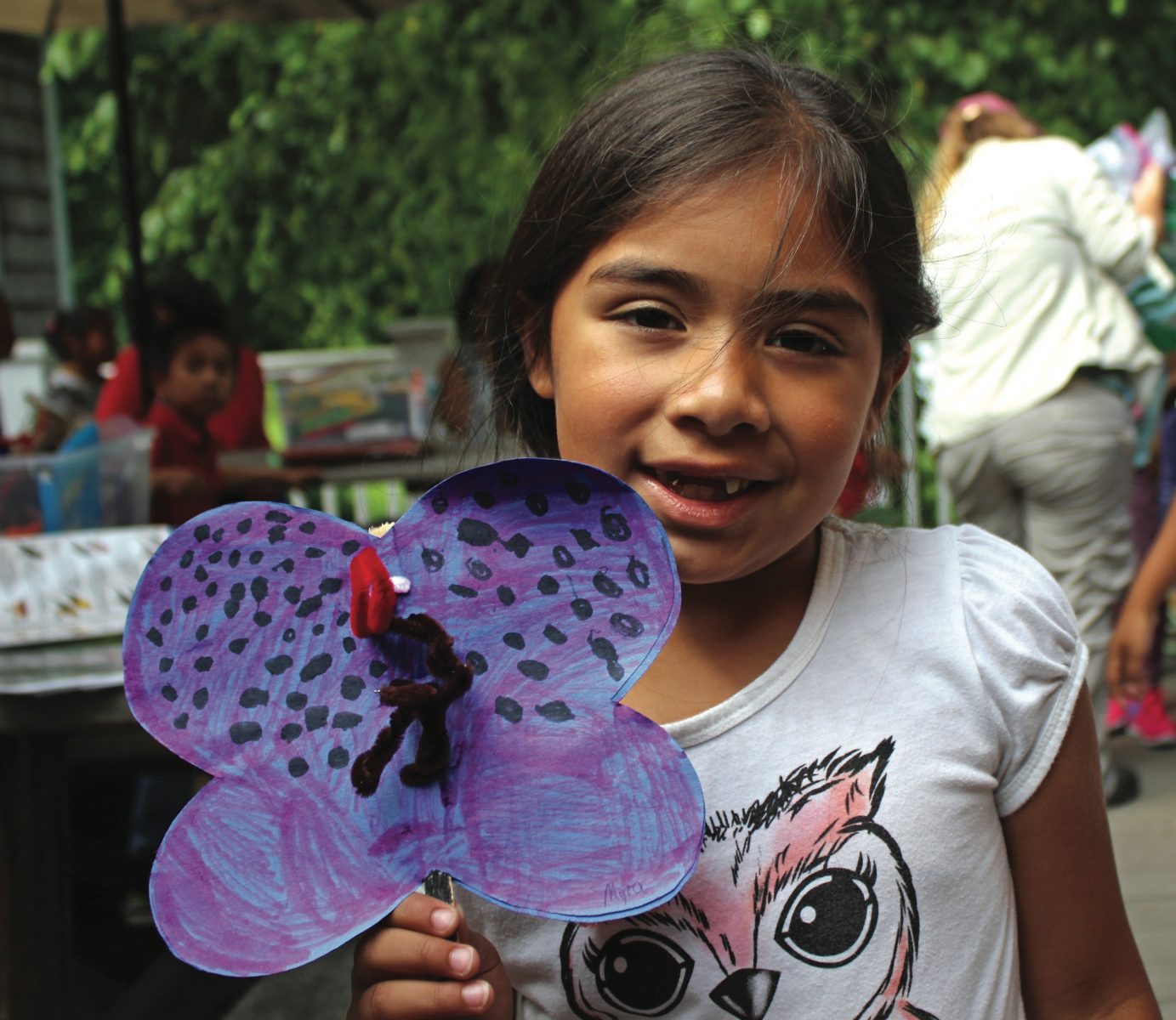 As noon approaches, the teachers and Davis, with assistance from Conservancy intern Cole Fisher, reconvene the kids on the office deck for show and tell. Shyly at first and then suddenly beaming with pride, 6-year-old Sofia, who is wearing a pink T-shirt emblazoned with “Always LOVE Yourself,” shows off the popsicle-stick butterfly puppet she made.

Davis then holds up and passes around some of the morning’s most notable finds, including flies that mimic bees, skippers and swallowtails, and, of course, the iconic migratory monarchs. Noses press against the mesh sides of the creature carriers as they pass from one set of tiny hands to another.

After the students are back on their bus and headed for lunch, Davis reflects on how she felt the morning went. “We didn’t have to coax any kid to pick up a net,” she says with a grin. “Our goal was for them to have a really great experience out in nature. Mission accomplished!”