Renovating a former flooring showroom into a trendy, industrial tavern are four Virginia Beach residents on a mission to redefine ‘local.' Old Beach Tavern is a spacious, family-friendly bar situated just outside the residential community of Kings Grant in Virginia Beach. Unlike other dives in the area, every aspect of Old Beach Tavern, from its pub-inspired eats to its leather-bound booths, are purely Coastal Virginia.

“We wanted this bar to be as local as possible,” explains Stephen Young, co-owner and general manager. “Almost all of the materials we used to construct this space were locally sourced. The wood [used throughout the bar] is from Gloucester and Suffolk, the leather is from Hampton and the [exposed] bricks were pulled from the Norfolk foundry.”

Several appliances were also refurbished from Restaurant Depot or purchased from Kenney’s Restaurant Equipment in Norfolk. Even the bar’s artistic touches are swelling with local inspiration. 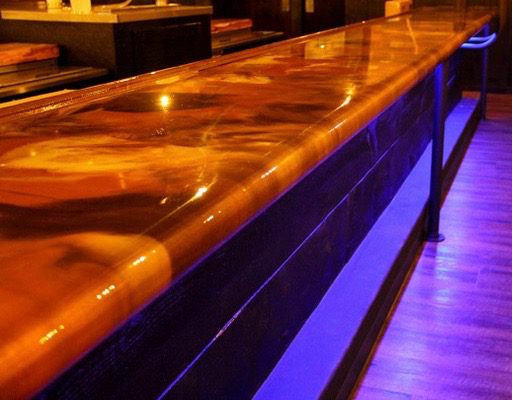 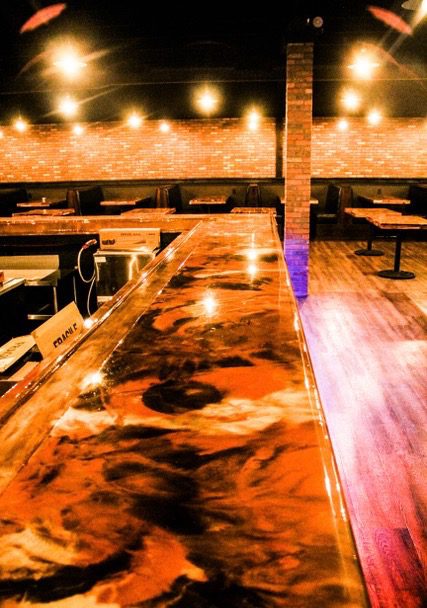 Focalizing the tasteful interior of Old Beach Tavern is an Igor Turovskiy original. Turovskiy, a Virginia Beach artist and close friend of Young’s, crafted a one-of-a-kind bar top made from dissolved copper and acid. The melted mosaic of copper shades that line the U-shaped bar burns gold above the colored LED lights that illuminate the bar’s underbelly. Another Turovskiy piece hangs on the bar’s back wall beneath a row of flat screen TVs that extend into the tavern’s designated billiards space. 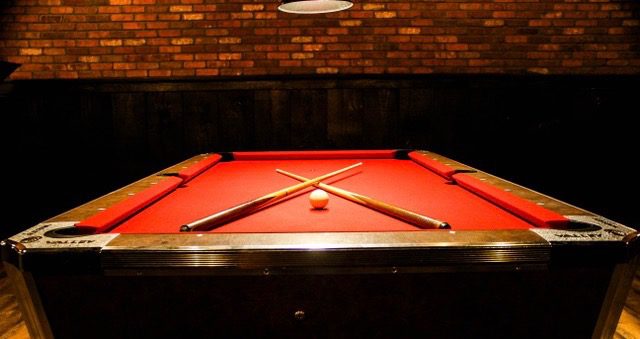 The two red felted pool tables are bordered by collapsible wood tabletops and a custom-built ledge fitted for both glasses and plates. Having worked in the restaurant industry for 20 years, Young knows that openness and functionality are key to every bar.

Looking out to the front of the restaurant are an elevated stage for live music and several eight-person booths outfitted with USB ports for tech savvy patrons. Sizable communal tables dot the tavern’s interior as well, and will soon be loaded with mouthwatering eats crafted by Executive Chef, Howard Ashe, and his culinary team.

The kids’ menu, designed by Young’s 6-year-old son and 9-year-old daughter, features scaled down versions of the main courses, but stays true to the team’s dedication to quality. The typical frozen produce and boxed pastas found on other pubs’ youth dishes are replaced with made-to-order, hand-breaded chicken tenders and a velvety macaroni and cheese, courtesy of a Young family recipe.

Many of the tavern’s taps are flowing with local brews, too. Young explains that he and his team are not only passionate about serving regional beers, but ales from veteran-owned and -operated breweries as well. Young also hints at the addition of local spirits into the tavern’s well drinks.

Other notable aspects of Old Beach Tavern are its valet services and designated parking spots for Uber and Lyft drivers.

“We are really excited to provide [Virginia Beach residents] with an upscale, neighborhood bar that can be enjoyed by the whole family,” says Young.