From solar panels and a vegetated roof to art rooms, dance studio and theater program, Virginia Beach’s school for gifted and talented students was built on a blueprint for education

Tim Cole walks across the main lobby of the Old Donation School in Virginia Beach with a revelation of what’s beneath his feet: "Here the mouth of the bay. Here's Fort Story right here."

This new school’s foyer floor features a detailed map of the Chesapeake Bay watershed plus the Outer Banks of North Carolina, allowing pupils to plot actual sites by longitude and latitude. "And It's really cool to see them out there working on this floor," says Cole, the project manager for the construction of this school. "It's to-scale, too."

These maps are also well lit with sunlight—a facet appreciated by gifted students like sixth-grader Trevor Darr. "I just love this building and how environmentally friendly it is,” Trevor says. “They use the environmental factors to help us perform better by using the sunlight and incorporating how it flows.”

Solar panels deflect direct sun from coming into the building, Cole says. And when the sun is lower in winter, says Cole, it penetrates deeper into the classroom. Architects meticulously designed this recently-opened building to capture sunrays, using sloped ceilings and wall-tall windows that bring in the most light, depending upon the season—fall, winter or spring.

"Every single room has a window, and we use the sunlight coming in more than we use LED lights to light our building,” Trevor says. “And it's just beautiful how we use all of the environmental factors."

"It’s pretty fabulous," says the school’s principal, Kelly Hedrick. "And we wanted every space inside and outside to be a learning space.” 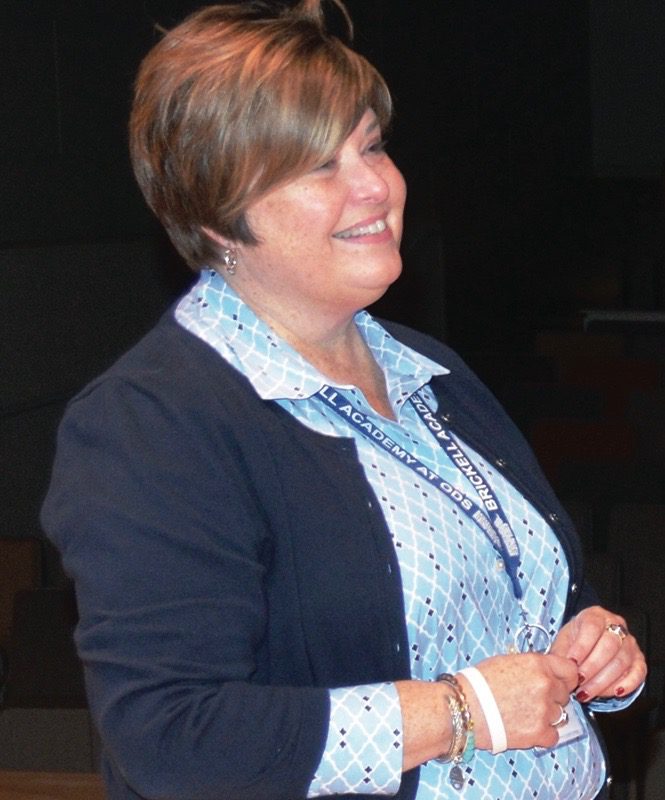 Open since April 3, 2017, the $63 million Old Donation School is the home of the Edward E. Brickell Academy for Advanced Academics and Arts. This is the city’s full-time school for 1,200 gifted and talented students.

Virtually the entire 225,000-square-foot structure serves as part of a lesson plan for students in grades two through eight, teaching them why something was built—and for what reason. "They can see and understand abstract concepts at a pace and at an age that is much earlier than others,” says Hedrick, 54. “Our goal is to develop their full potential.”

Just check out the library: It’s open and airy and full of books. But you’ll also see ducts that are uncovered for the heating and cooling system. And there’s a reason for that, says Cole, 58, the sustainability officer for Virginia Beach Public Schools. "There is a lot of structure that is uncovered, because that's part of the teaching side of it,” Cole says. “You want a student to understand how a building works and why that's there."

Students use collected rainwater in silos at the center of the building to perform science experiments. They conduct more experiments on how plants grow in the greenhouse. "You can tie every curriculum that they teach into the gardens somewhere"—math, science, geography, Cole says. "The whole idea is tying these things into teaching. The key is linking that with the different curriculum." 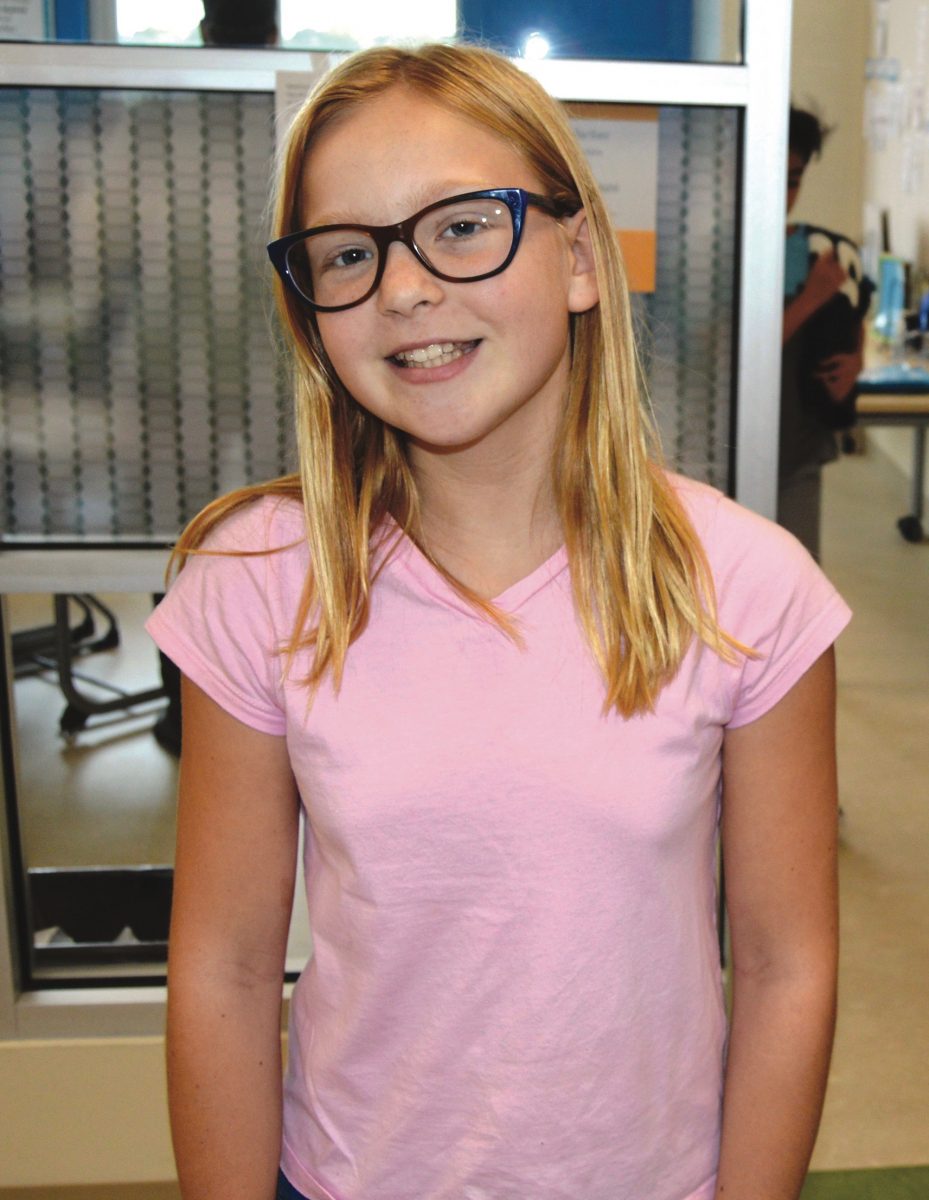 Caitlin Dean, a sixth-grade science teacher, offers praise for “the openness” of the new building. “It has spaces for students to work that's not just contained in a single location." And that helps kids learn, says sixth grader Chloe Abbott. "It's not just all packed in one classroom listening to one teacher. We have the extended learning space now, and it gives us a different opportunity to learn somewhere else instead of just in the classroom. You get more hands-on learning here, more materials—more spaces."

On a Monday morning, Cole and Hedrick stand on the school’s vegetated roof—with hand-rails, a weather station and a garden with chives. "We've gotten much smarter about how we use these as outdoor classroom space," Cole says.

A typical roof lasts about 20 years, Cole says. "When you cover it with plant material, that life cycle might extend to 40 or 60 years. So you don't have that UV damage on it. And that's what breaks down a roof over time plus it provides natural habitat. You see birds that come up and nest up there on these vegetated roofs."

This could really make a great getaway for just about anyone. 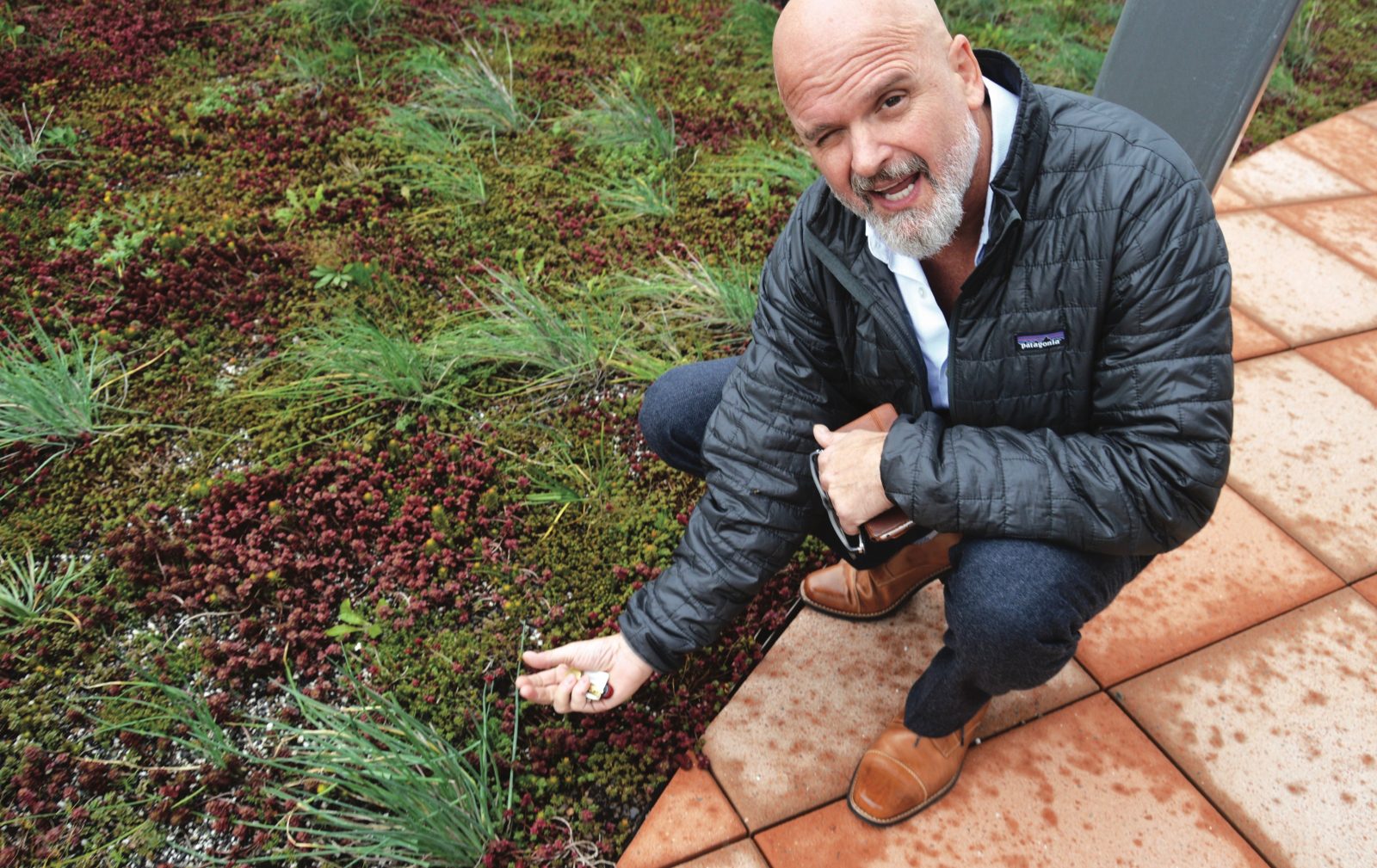 “What I like about this building is the flexible-ness of it," says School Counselor Jane McClellan. "There are places to hang out and talk." On the faculty for nearly a half-century, McClellan knows about talking—to anyone. "I was actually the first elementary school counselor in Virginia Beach public schools,” she says. “And I started with the gifted program 44 years ago.”

In those days, kids attended classes just one day per week, leaving their home schools and staying at Thalia with a classroom teacher. They also enrolled in “Special Interest Units” and completed projects called “Contracts.” Over time, Hedrick says, "We also realized that, for some kids, one day a week wasn't going to be enough to maximize their potential.”

During the 1979–80 school year, the city’s one-day-per-week gifted program moved into the former Old Donation Elementary School, a structure built in 1965. A few years later, the gifted program shifted to full-time enrollment for students across the city, from Cape Henry to Creeds.

All the while, the old school continued to age.

"In the old building, we had a lot of problems with light not being concentrated in certain areas,” Trevor Darr says. "A lot of the rooms were kind of dark, and they had differing degrees of light. And the heating system didn't necessarily work all the time.”

Still, this site was conveniently located near the center of the city, just a couple of miles from Virginia Beach Boulevard. So remaining here—and building the new school—made sense, Cole says. "It's not easy to go find another piece of property in the city and go buy it for an elementary school. So whenever we can build on that site, we'd like to do that."

Constructing the new building on Honeygrove Road did not, unfortunately, leave much room to play ball—except for a soccer field and a small baseball diamond.

"We just don’t have the fields,” Hedrick says. “Students go back to their home schools if they want to play baseball or basketball or volleyball. And we have a lot of students who do that."

Here’s what you will find on the new campus: a television studio, art rooms, dance studio and an 800-seat auditorium (with a balcony) that can serve the school’s orchestra, band, chorus and dance group. 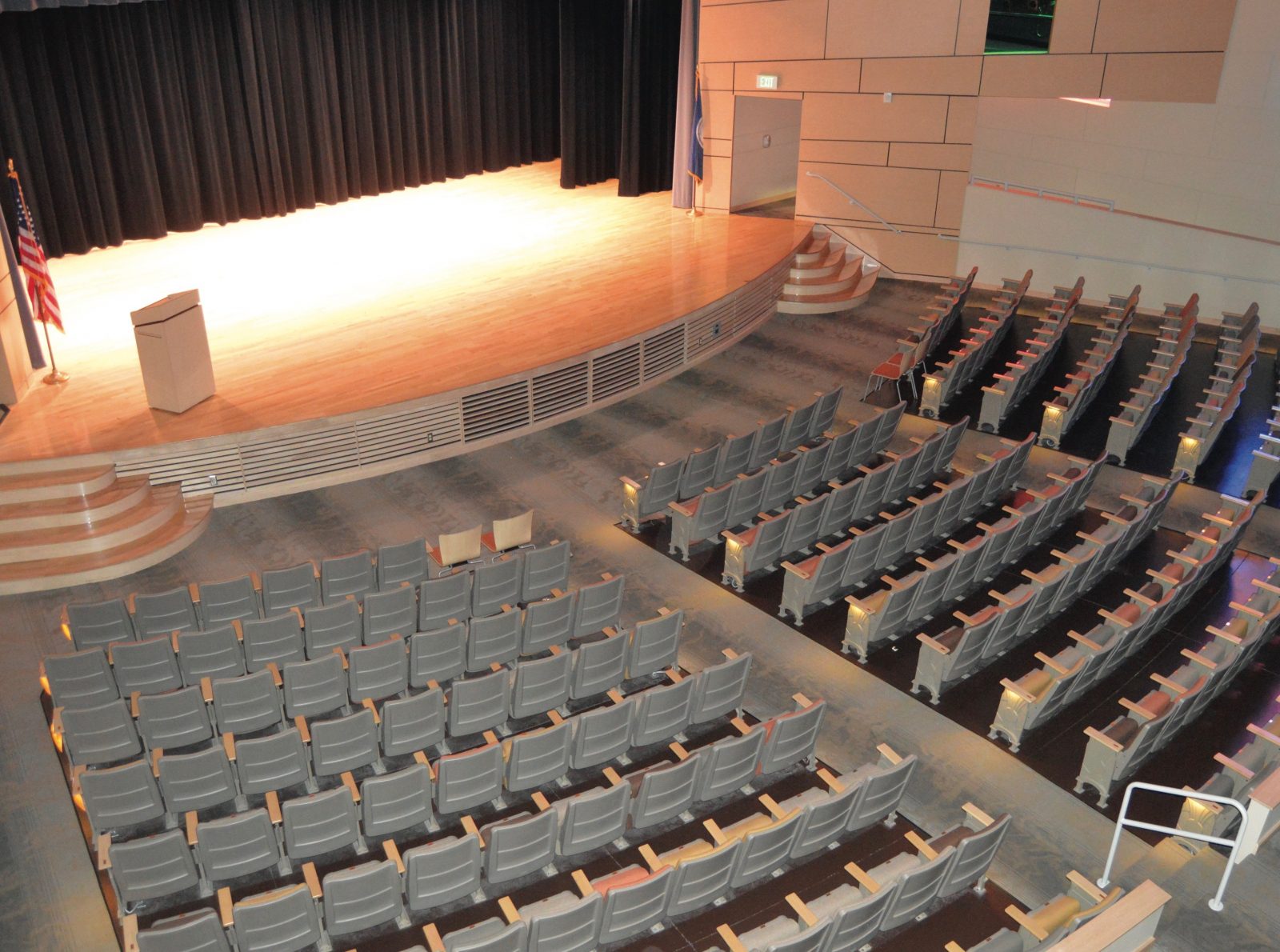 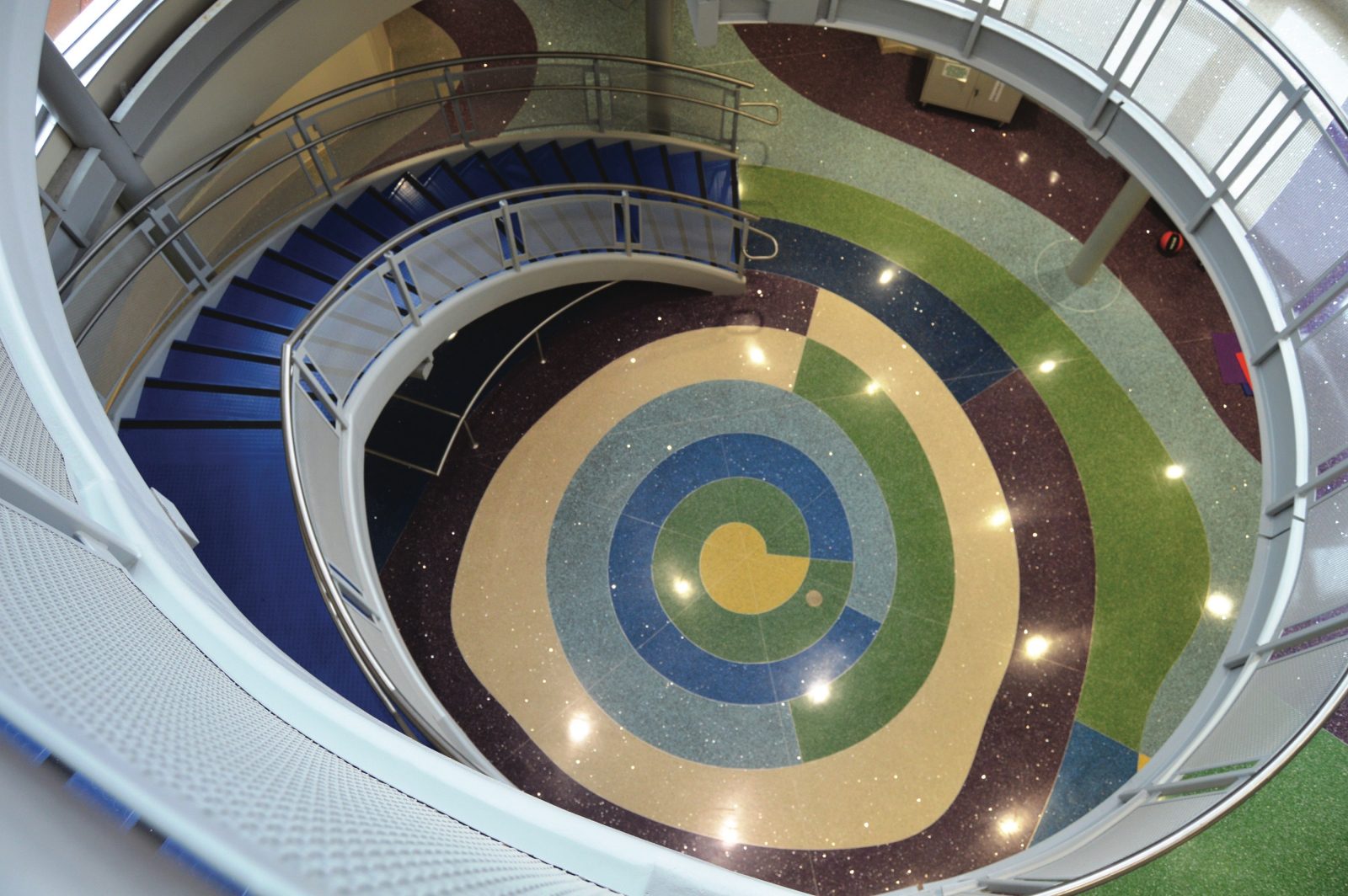 The interior stairwell resembles a scene from The Wizard of Oz 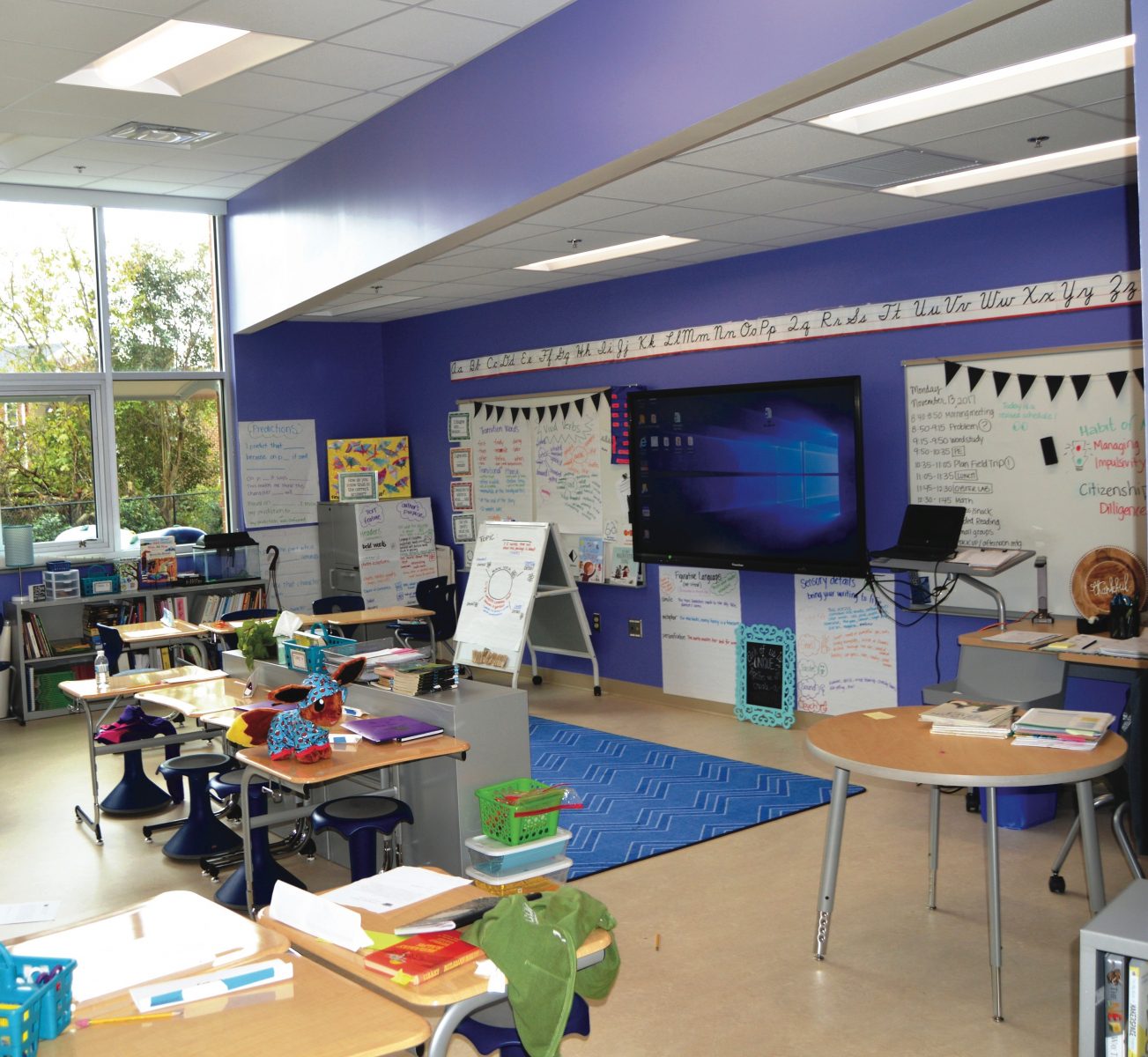 "We have a theater program,” Hedrick says. “We're the only middle school in the division that offers theater as an elective. In all the others, it's an afterschool club. So it made sense to have an 800-seat auditorium."

“The needs of this population are different—not better, not worse—just different,” Hedrick says. “These are children who have their own ideas about things, and they need an opportunity to, first of all, explore but also experiment in an environment that is a safe one to challenge themselves, to take risks.”