If the phrase “lunch and learn” conjures up images of boxed sandwiches and boring slide presentations, that’s probably because you’ve not had the privilege of washing down sublimely fresh, just-out-of-the-Rappanhanock bivalves with your choice of Virginia wine at the Virginia Oyster Academy. Held at the Tides Inn resort in beautiful, rustic Irvington, Virginia, this unique event takes place in the heart of one of Virginia’s eight distinct oyster regions, each with its own varieties of this favored fruit of the sea.

A boutique experience as educational as it is tasty and fun, the Oyster Academy invites participants to dive into the history and ecology of one of the most recognizable—and certainly most beneficial—underwater residents of the Chesapeake Bay watershed. Happening Friday and Saturday mornings throughout the fall, weather permitting, this flavorful, four-hour adventure begins with an informative presentation led by oyster expert Joni Carter, held in the Tides Inn’s conference room overlooking picturesque Carter’s Creek. 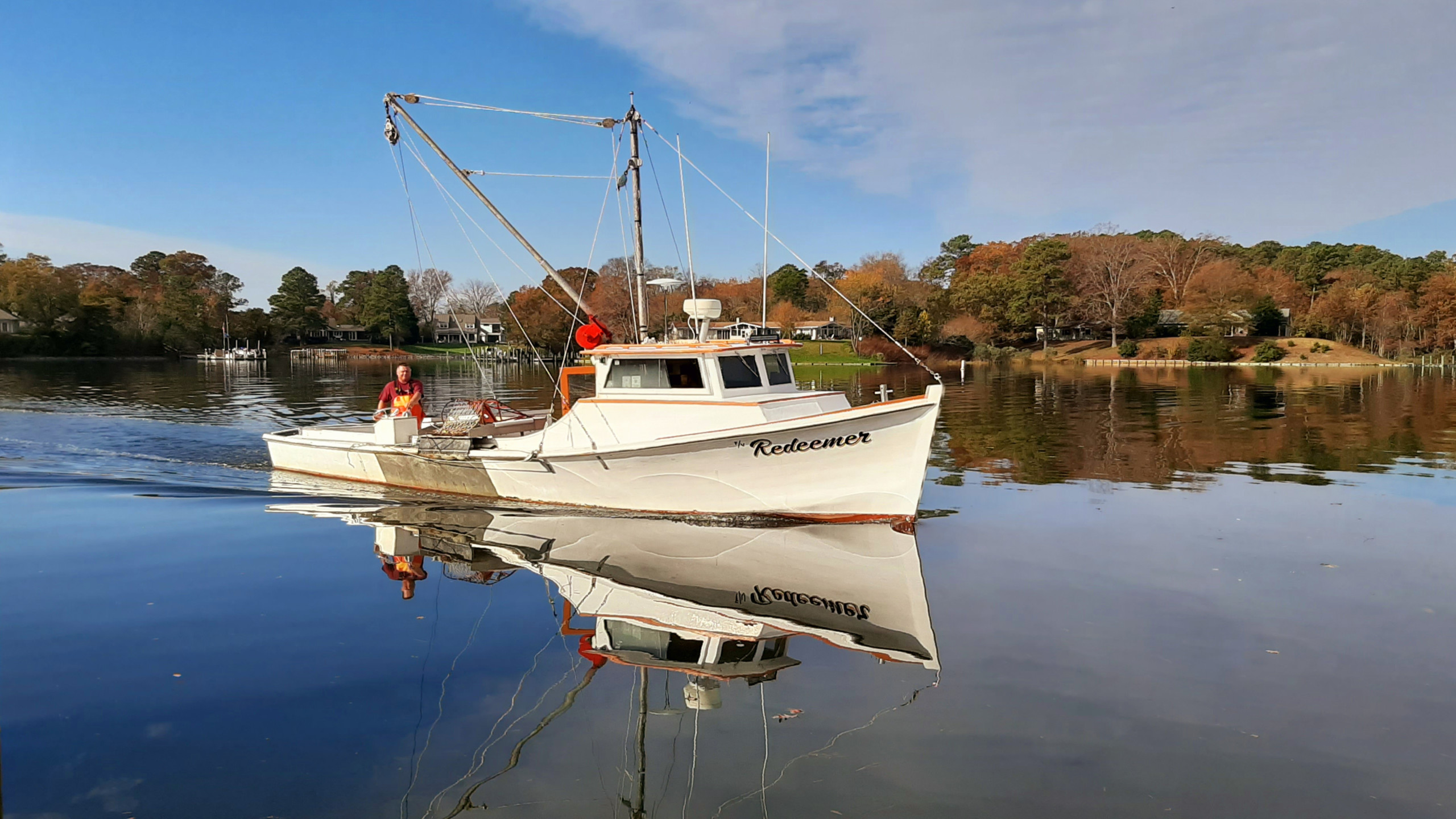 Get Onboard the Oyster Academy: Captain William Saunders’ wooden dead rise, the “Redeemer”

A staple of the American diet for centuries, oysters were wildly popular particularly in the early 20th century, Carter tells me and an intimate group of five other participants gathered on a breezy but mild fall morning. A cash crop for watermen, then and now, these “hot dogs of the 1940s” were both a delicacy and an inexpensive source of protein for the masses. In those days, an able-bodied man with not much more than a shucking tool could make a decent living harvesting and selling oysters, she says. Whether raw, roasted, steeped in a savory stew or topped with that beloved Rockefeller mixture of breading, bacon and parmesan, oysters remain a staple on restaurant menus.

Since their numbers dwindled drastically into the 1960s and ’70s, a variety of conservation efforts–from shell recycling to artificial reef building—have sought to turn things around, not just for the culinary demand but for the health of the Chesapeake Bay and surrounding waters in which oysters play a crucial role. Just one adult oyster can filter 50 gallons of water in a single day. Carter also schools us on the difference between wild harvested oysters and those generated through the practice of aquaculture, a distinction the next two legs of the Oyster Academy experience bring into sharp focus.

After Carter’s presentation, we head down to the Tides Inn dock to meet working waterman William Saunders aboard his wooden deadrise, the “Redeemer.” Captain Saunders, who seems perfectly comfortable in t-shirt sleeves under his bright orange and yellow chest waders despite the brisk morning air, is our guide for an hour-long outing to the mouth of the Chesapeake Bay and back. Along the way Saunders, who has more than three decades of experience working these waters, demonstrates two primary methods of harvesting oysters, traditional tonging using two long wooden rakes and dredging using a giant basket that scrapes the mollusks up off the riverbed and hoists them onto the boat with a pulley system. 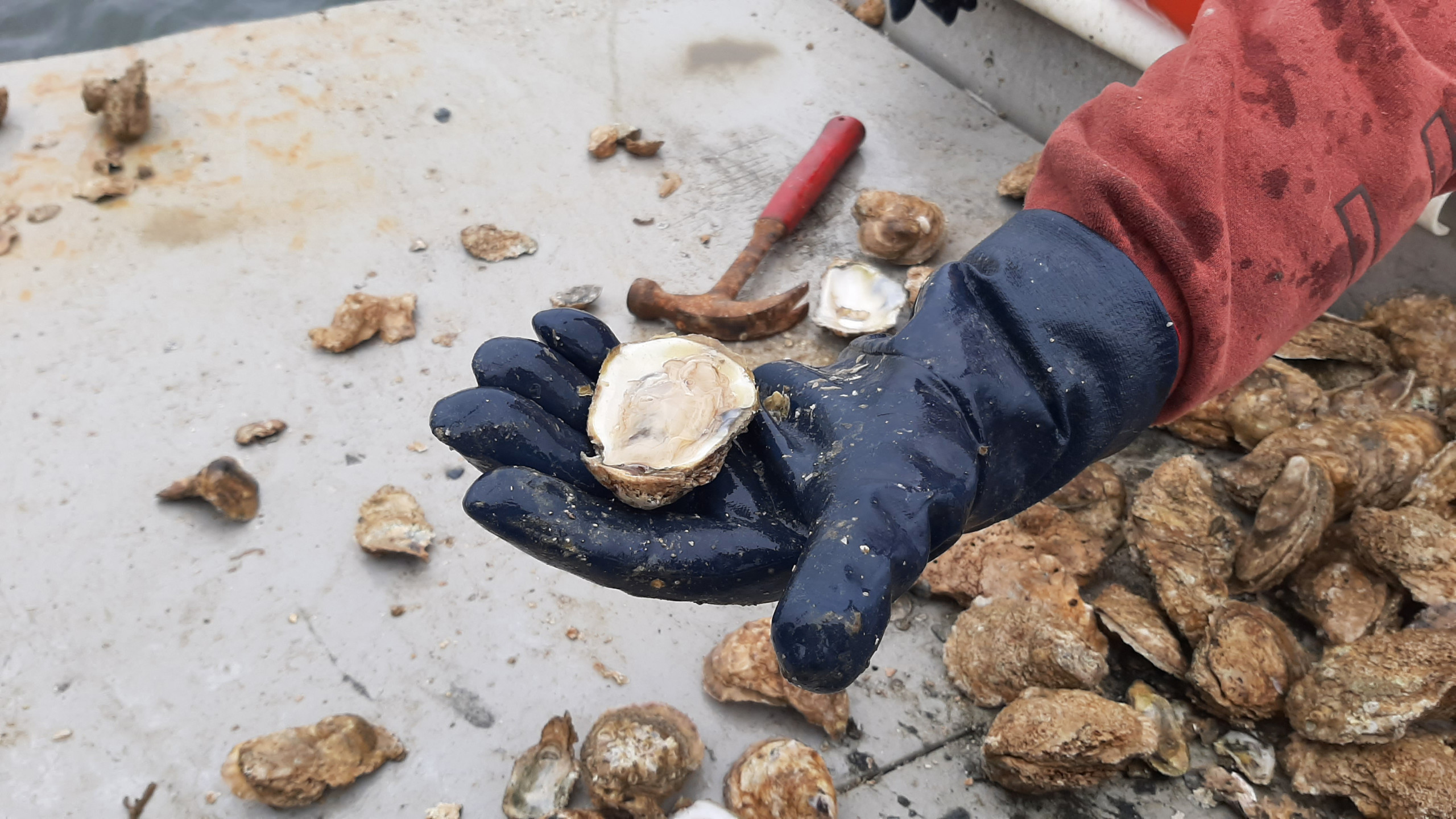 Best Off the Boat: A just-shucked oyster offered up to attendees during the Oyster Academy boat trip.

“A healthy bed is a healthy life for fish, crabs and everything else,” Saunders tells us as he sorts through his haul at lightning speed, tossing oysters back into the water that don’t meet the 3-inch size minimum. Next he demonstrates proper shucking technique, popping open the shells of the keepers he has set aside in one corner and offering their sweet, plump, briney contents to each passenger, one by one. “You can’t get fresher than this,” he says. Saunders also shares his no-nonsense recipe for fried oysters in three bowls: one bowl with flour and cayenne, one with milk and egg, and one with bread crumbs, in that order. Dip your oysters in each, he says, pop them in hot oil until golden brown and you’re, well, golden.

Recipes and methods for preparing and serving oysters are as plentiful as the people who love them, of course, and the final portion of the Oyster Academy is all about tasting, sipping and sharing knowledge. Aftering returning from the boat trip, guests gather poolside, adjacent to the Tides Inn’s newly opened Fish Hawk Oyster Bar where expert shucker, bar chef and oyster farmer Joey McComas is busy manning a coal grill, hot and ready for roasting oysters. 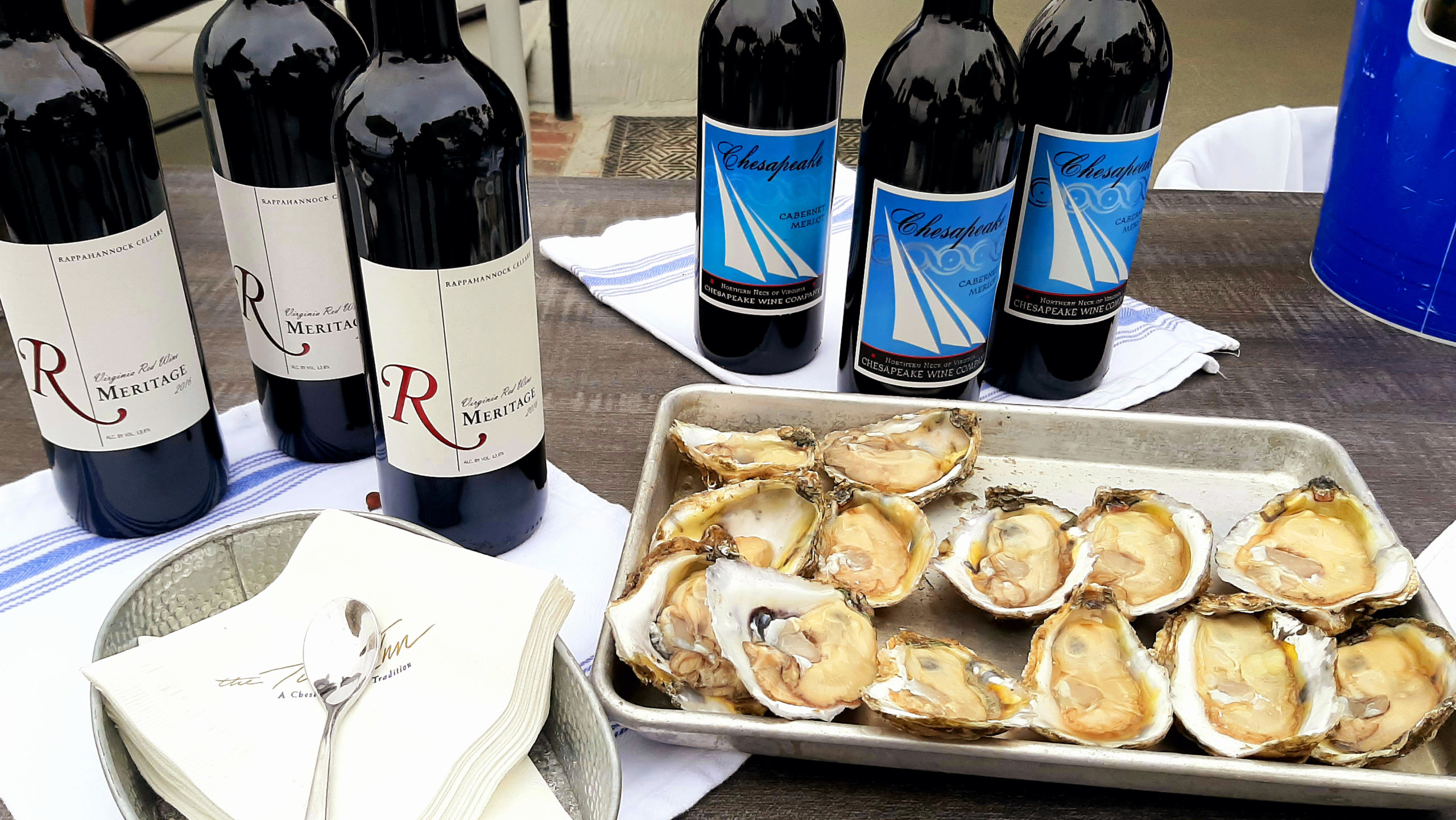 His signature preparation for the day is a simple but divine one—a dash of Thai chili oil, which caramelizes over each oyster as it roasts, resulting in a hint of sweetness and spice that pairs perfectly with the oysters’ naturally savory splendor. Unlike those we tasted on the boat, these oysters are harvested from a nearby oyster farm and tend to be more consistent in taste and appearance, often making them the preferred choice of restaurateurs.

Along with the Thai chili oil version, McComas plates up raw and plain roasted oysters with a variety of accompaniments for anyone who wants them. But, this oyster tasting isn’t complete without a little Virginia vino. On the day of our visit, wines on offer included a Chardonnay and a Cabernet Merlot from Chesapeake Wine Company (Ingleside Vineyards) as well as a Chardonnay, a Meritage and a Cabernet Franc from Rappahannock Cellars. All in all, a delicious and delightful way to lunch, learn and kick off your weekend.

The presentation, boat trip and tasting are all included in the price of the Virginia Oyster Academy. Cost is $250 per person. Classes typically begin at 11 a.m. on Fridays and 9 a.m. on Saturdays. For 2020, there are classes planned through December 19. This season, the Tides Inn will remain open through the end of January 2021 and will reopen in early spring when the Oyster Academy as well as other exciting experiences at the Tides Inn are scheduled to resume. 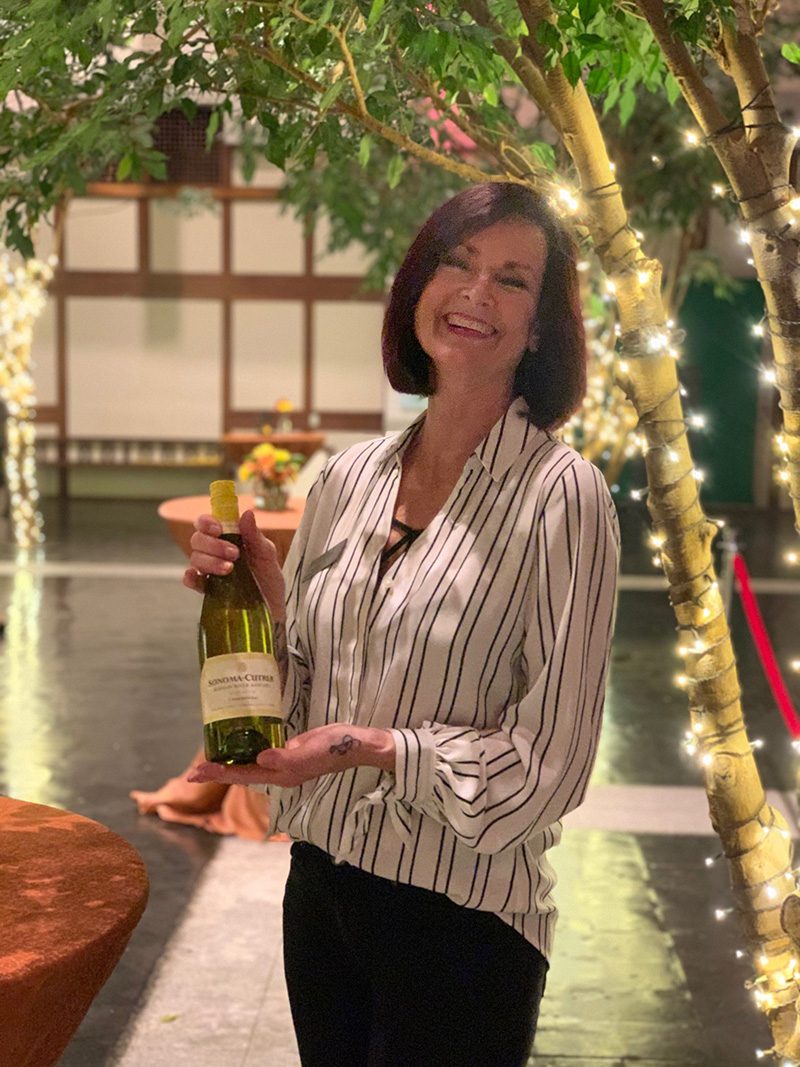 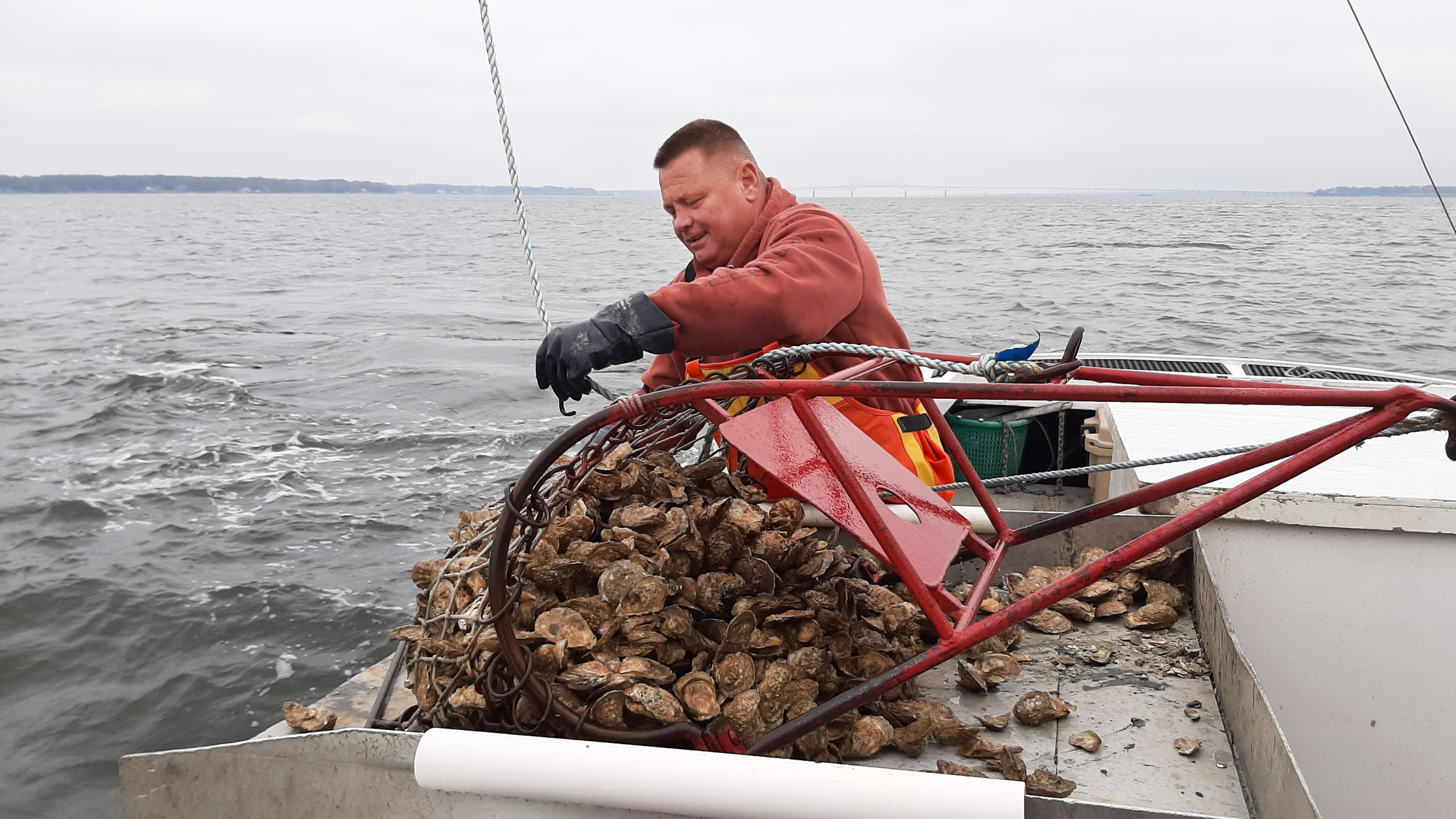 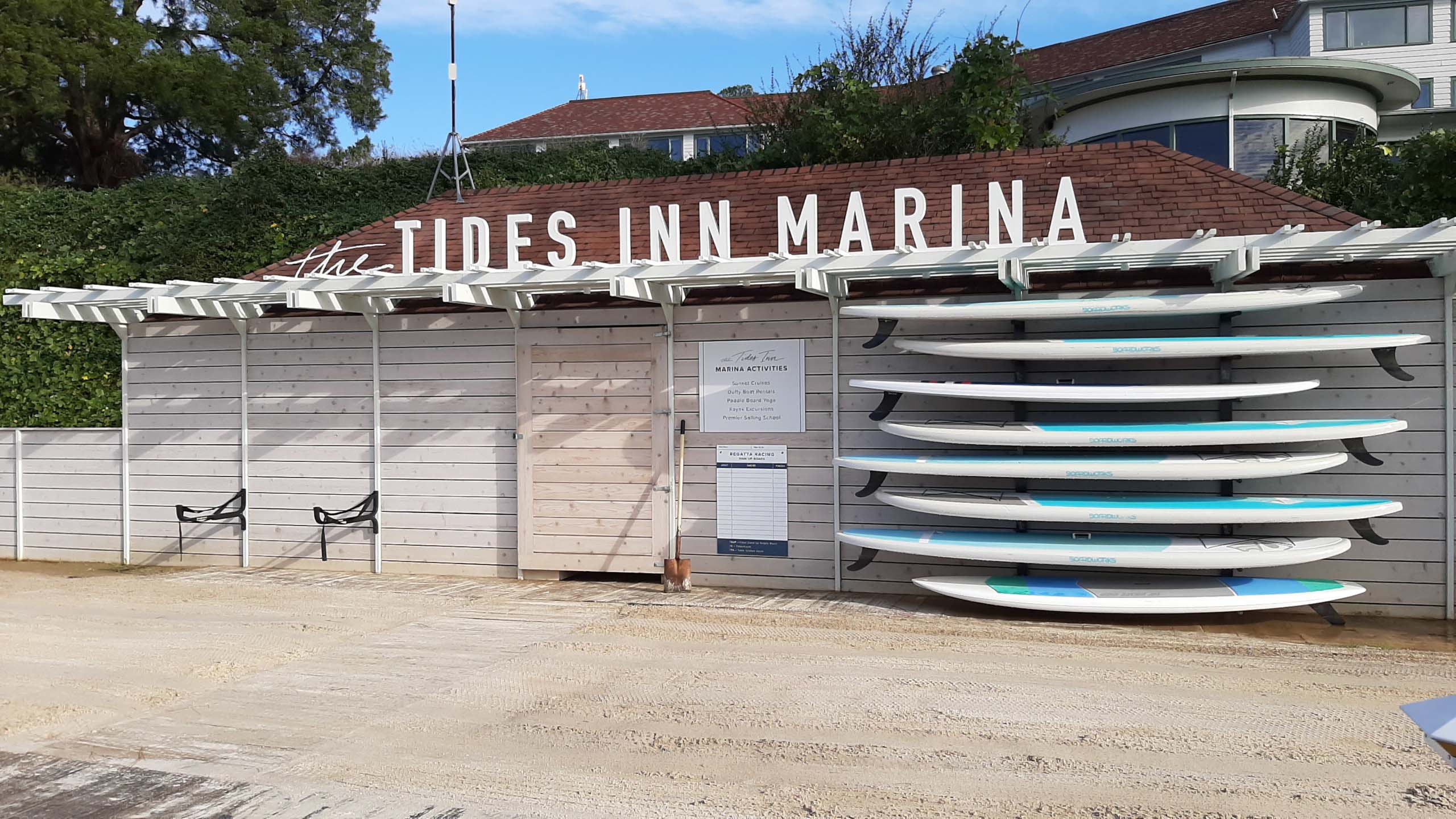 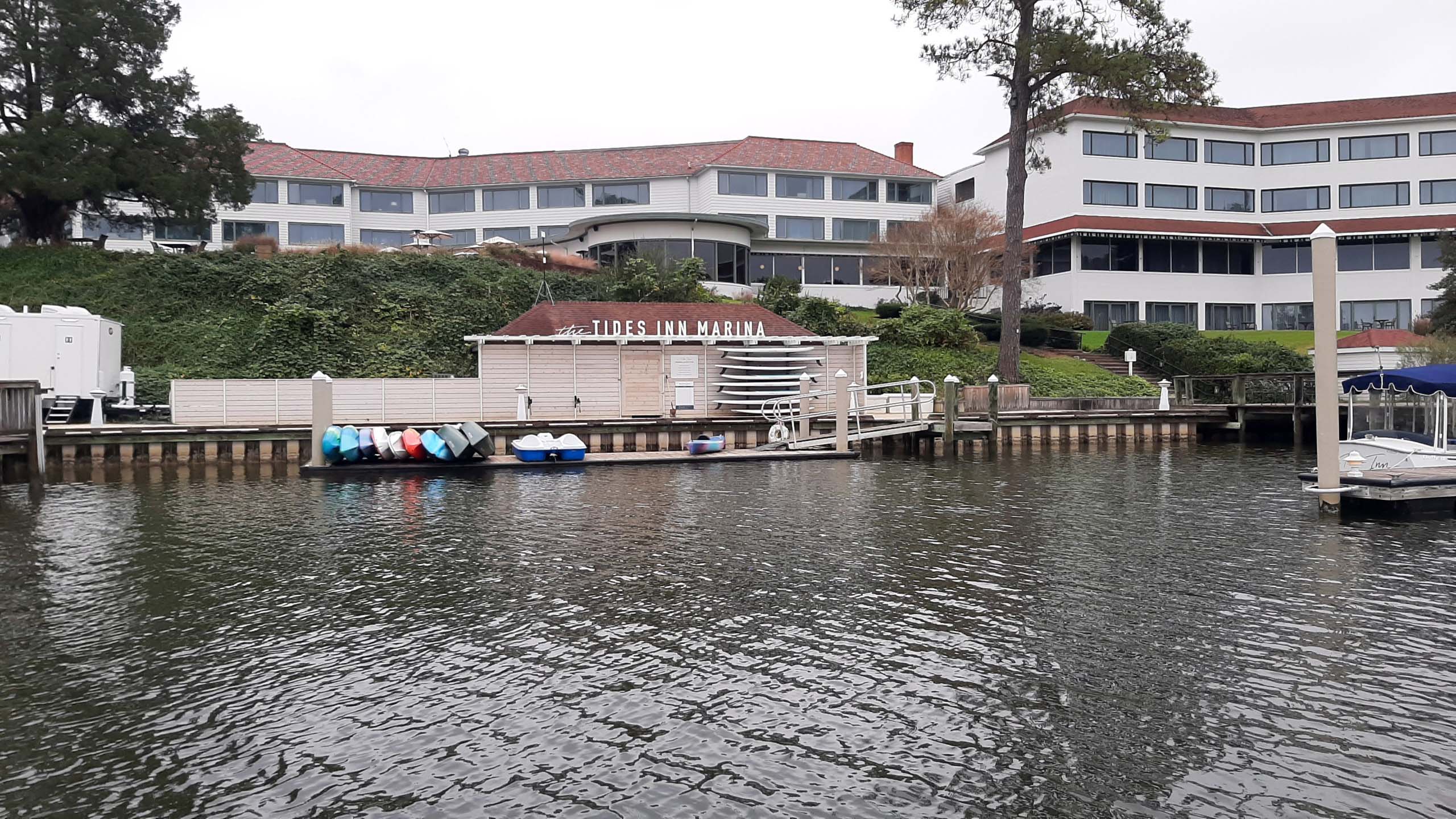 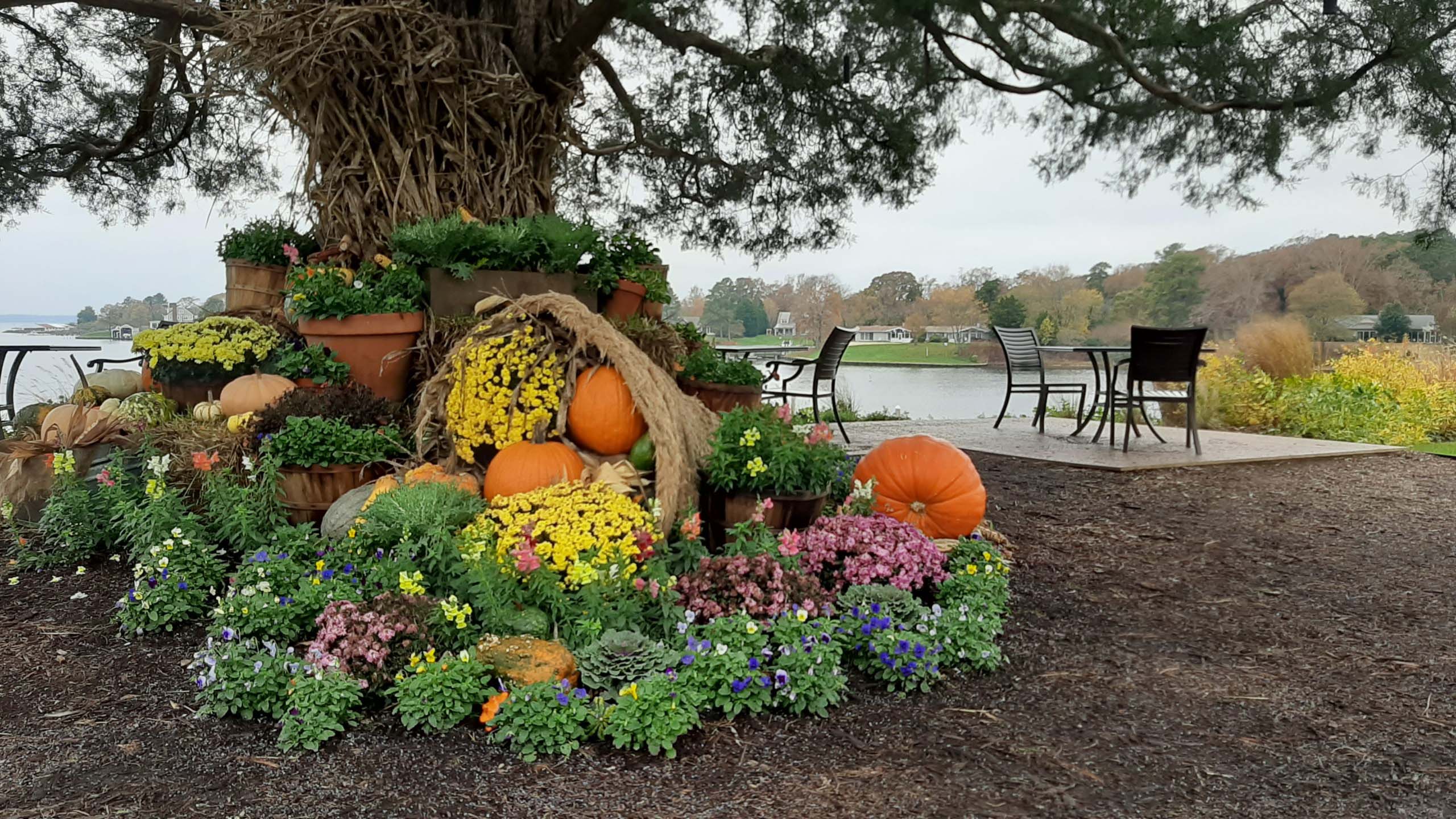 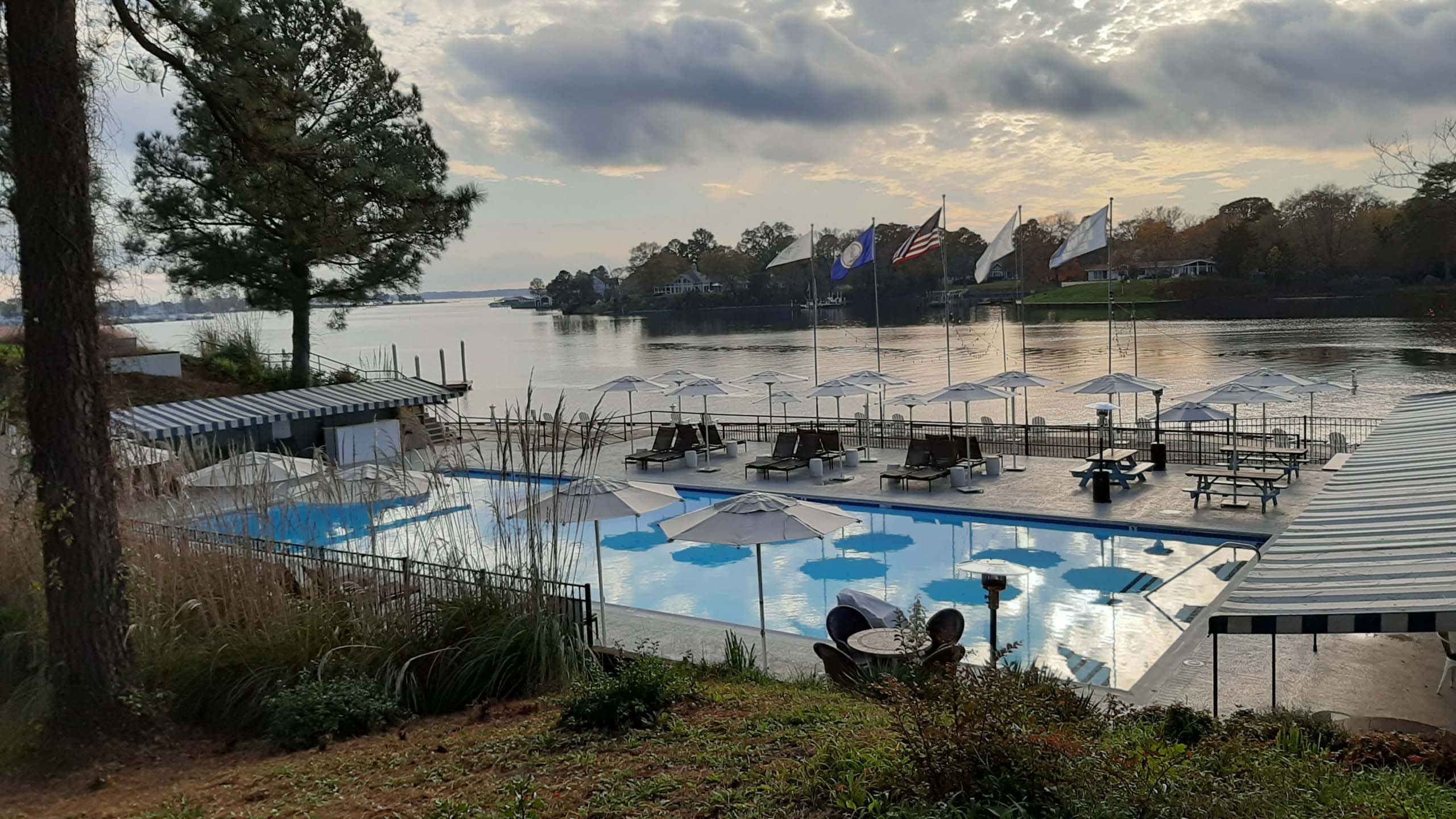 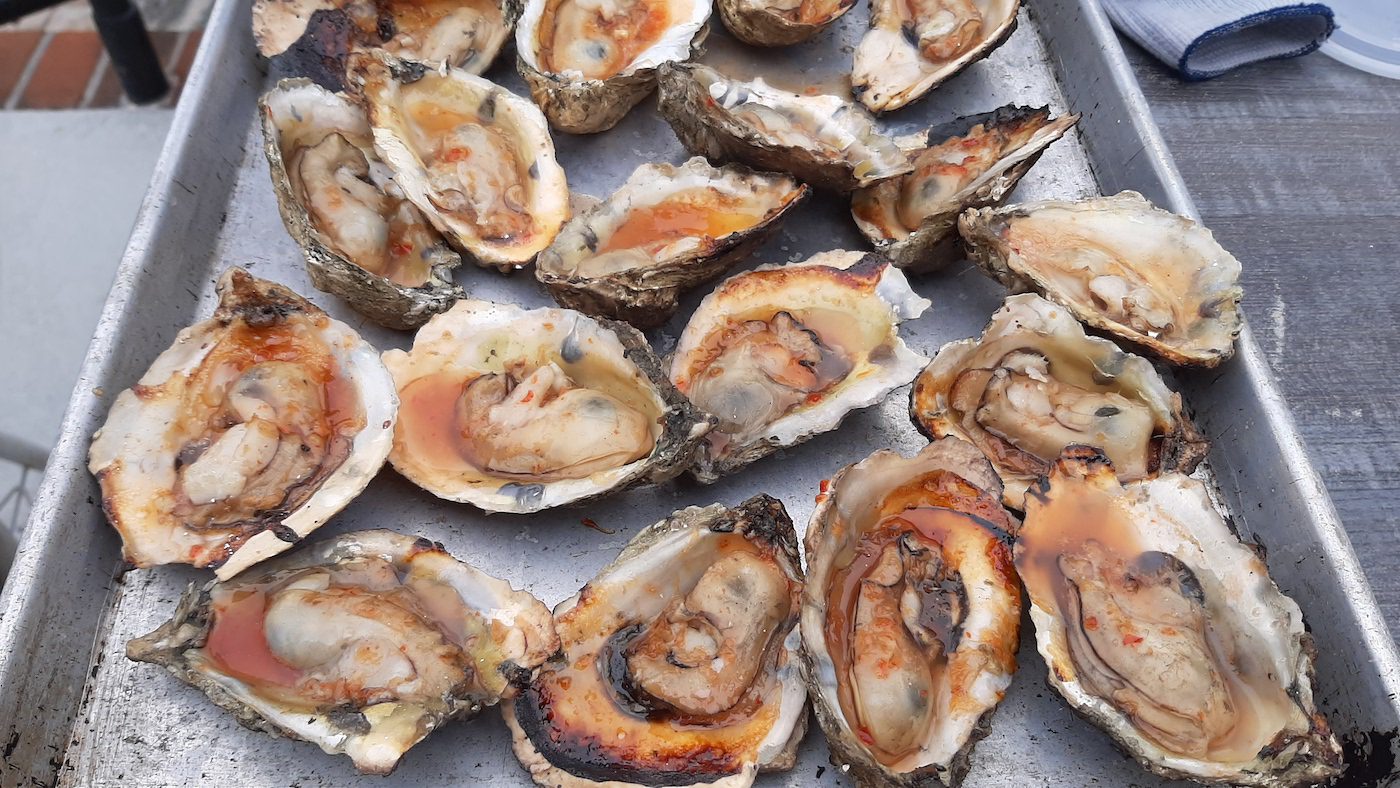 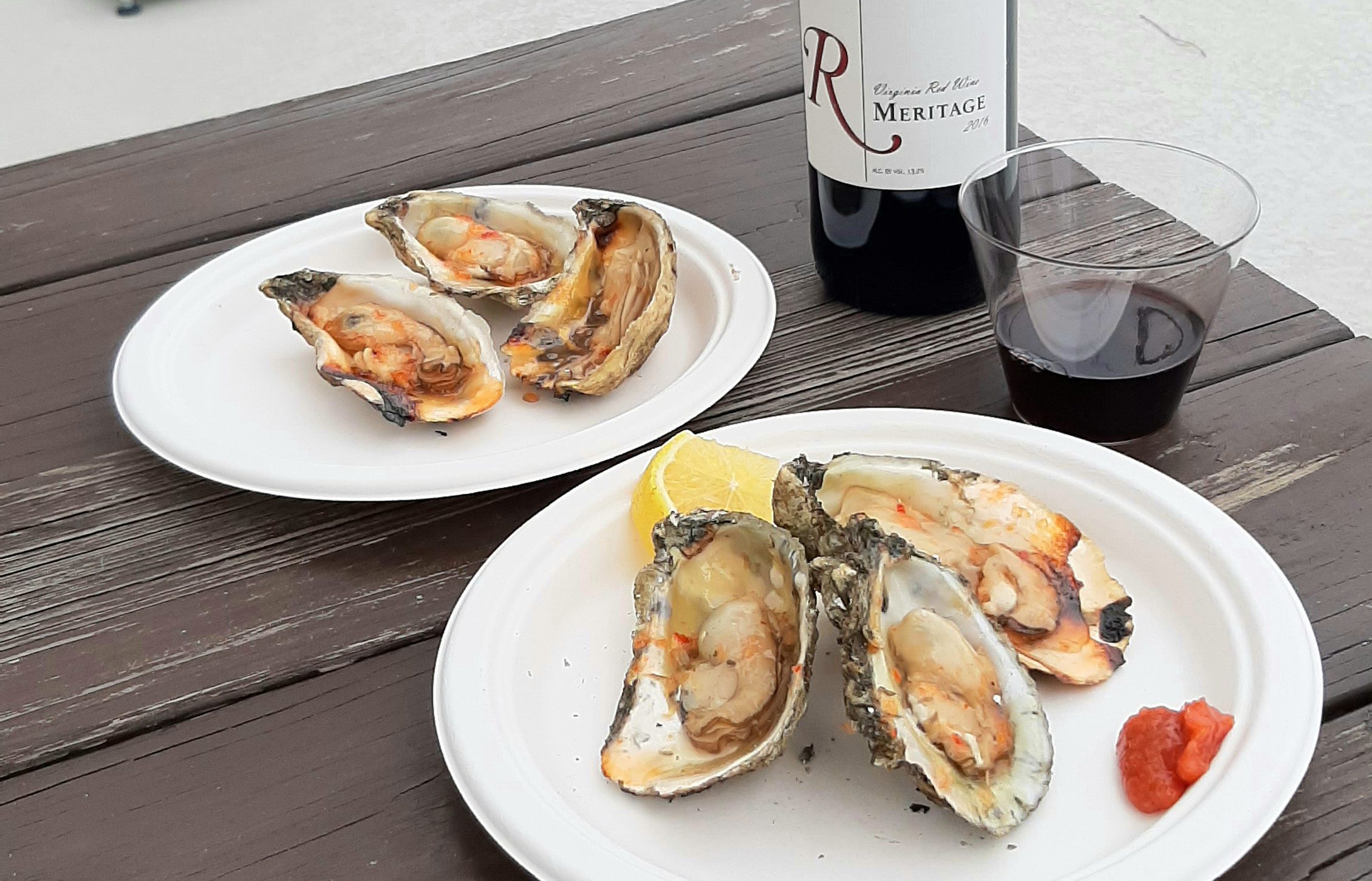 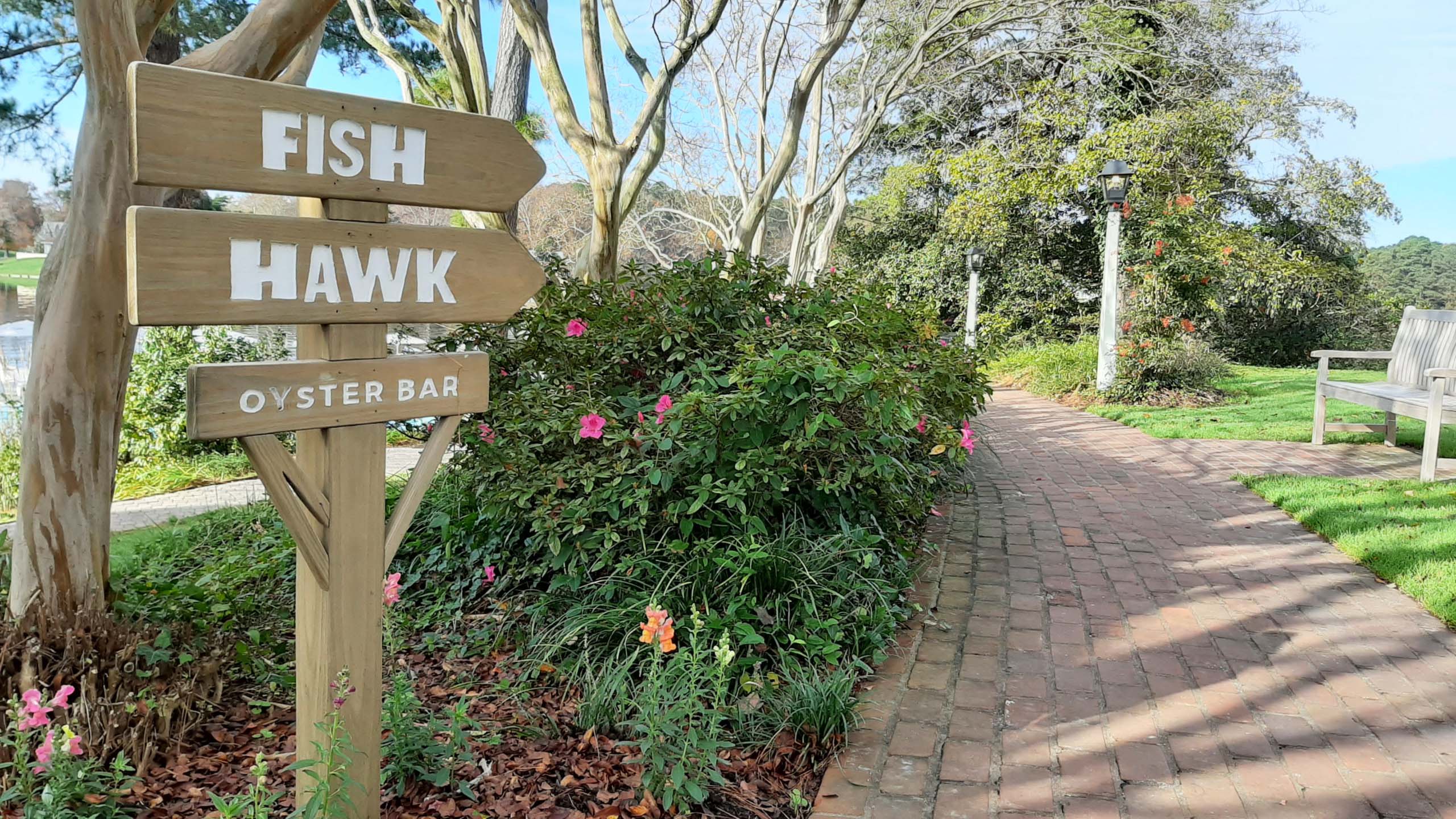 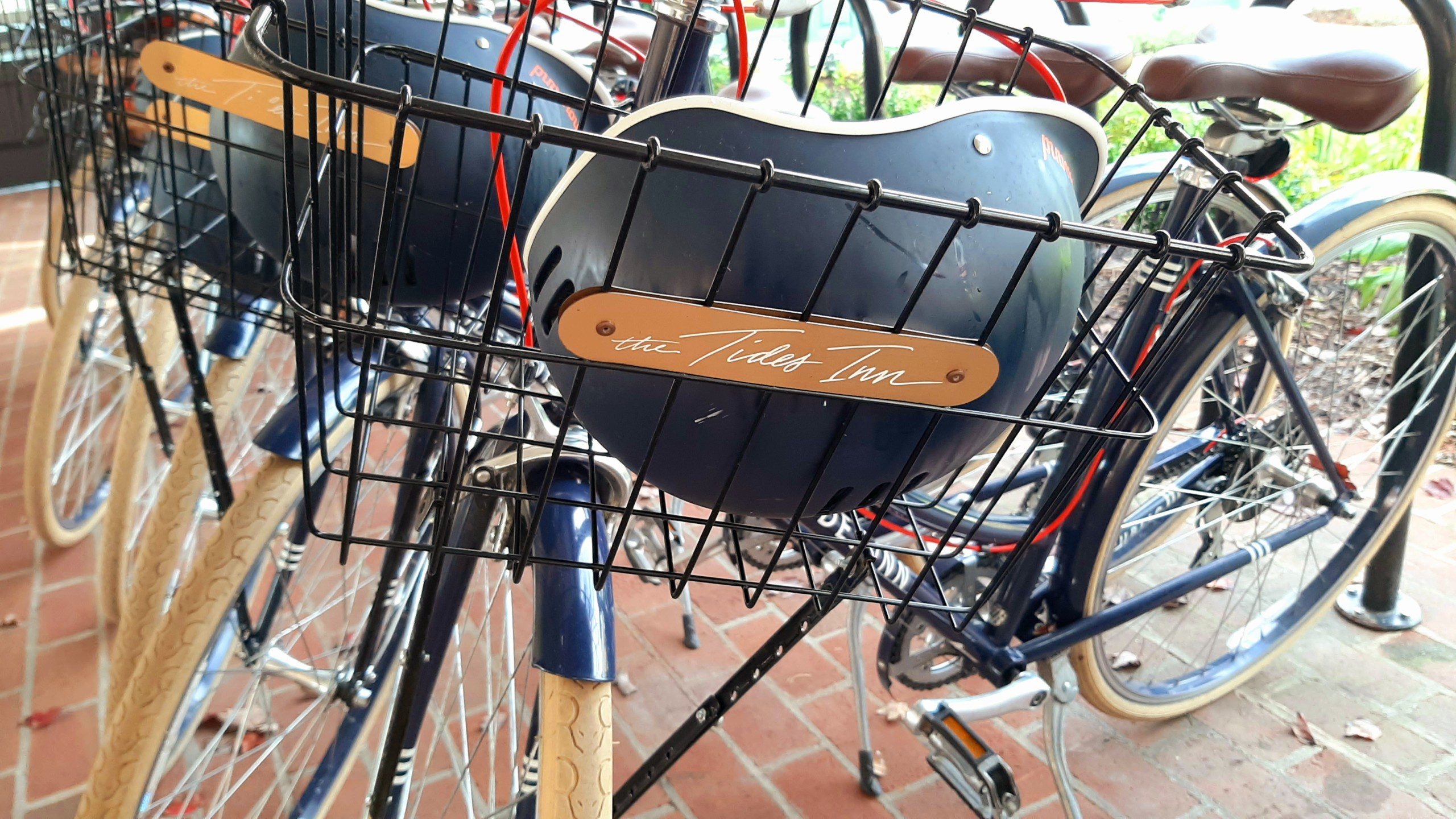