Increased production, a larger tasting room and a subscription cocktail club among the new things on tap at the family-owned Ironclad Distillery in Downtown Newport News

It’s as clear as white lightning: Ironclad Distillery is Kara King’s baby. But not just the latest run of bourbon blossoming in petit verdot barrels from Flying Fox Vineyard or the batch distilled with Bloody Butcher, a grain with a pedigree extending back to 1865—three years posterior to the Battle of the Ironclads. Nor the expansion of the distillery’s tasting room, which showcases Kara’s design homage to the Hotel Warwick, a relic from Newport News Shipbuilding’s opulent past. Not even the precise angle of every bag of bourbon marshmallows and tin of bourbon balls in their retail shop.

All of these things, but also the customers, the buzz saws, the cans of wood finish, the dry dock, the massive mounds of coal, the construction cranes that divide the sky, the ospreys fishing the James River, the card catalog from the Roaring Twenties, the perfectly cubed cubes of ice, and the whoosh of the Monitor-Merrimac Bridge Tunnel. Everything is her baby.

Which might have something to do with Ironclad’s growth. They’ve mushroomed from a 26-ounce still to a 500-gallon still and spread from 40 Virginia ABC stores to all of them, which Kara’s brother Owen (the head distiller) tells me numbers 372. They’ve added a second barrel room and are launching the Iron Fist, a subscription cocktail club. They’re doubling the size of their tasting room to include a comfy and covered patio space for cigar aficionados. They’ve hired an assistant distiller, booked their first wedding and started to entertain the terrifyingly expensive notion of transforming their third floor into a 10,000-square-foot event space.

All of this has happened much faster than anyone could have predicted, so after we sit down in plush chairs beneath a chandelier, the smell of chalk dust and paint heavy in the air, the siblings look a little torn and frayed. It’s early September, and the aforementioned wedding is scheduled for Oct. 2. Owen King offers homemade cookies and Detroit-style pizza, which pair so well with the petit verdot bourbon I consider robbing them and taking their liquor to the mountains to pen the Great American Novel.

When I ask him what has been easy for them since we last spoke in 2015, he immediately says “the partnerships,” and tells the story of calling Ames Russell of Richmond-based AR’s Hot Southern Honey, who didn’t even wait to hear his pitch before saying “yes.” Ironclad barrels can be found everywhere, even tiny weekend warrior breweries like Twisted Knot in Newport News. They have also partnered with Tradition Brewing, Vessel Craft Coffee, Sweeter Creations Sugar House, MoMac Brewing, Sly Clyde Ciderworks and on and on. 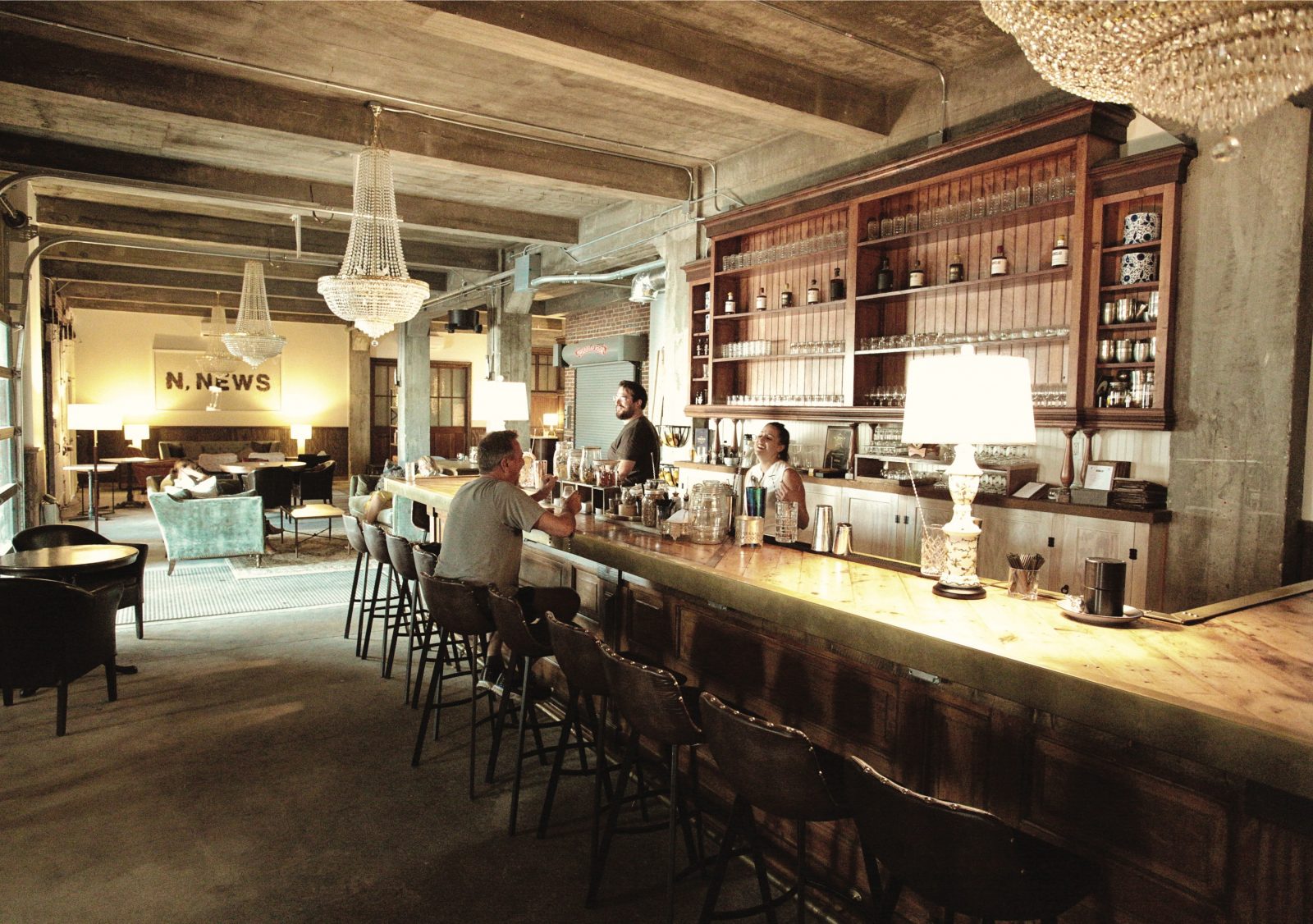 Kara notes she was surprised by how many people were eager to come to Downtown Newport News to drink bourbon, but there’s something about driving past the battleships and destroyers and heavy machinery and entering a building with 24-inch-thick brick walls. The space seems like it has always been there, and the experience feels like something you were meant to have.

The last time I visited, there was no tasting room, and their father’s construction company dominated the scene. The patriarch and business manager, Stephen King, is allegedly nursing a leg injury as his children take me past the still and into the barrel room to behold an Edwards ham maturing on scintillas of bourbon. Maple, toasted, hot honey, petit verdot, coffee, Bloody Butcher: all the bourbons are aging in one room so they bind into a single glorious smell, and it’s as if Plato has gathered all whiskeys from all stills and all barrels and fused their vapors into one scent to show the world how beautiful things can be.

Up in Barrel Room II, decades-old messages from travelers and thieves Plinko down the bricks as the James stretches towards the final leg of its journey into the Atlantic Ocean. It’s easy to imagine piano jazz, white tablecloths, a maître d’hôtel and braised quail paired with a bourbon of the month. When I suggest this to the King siblings, they recoil in horror. They aren’t in the restaurant business, but they sure are in the cocktail business. 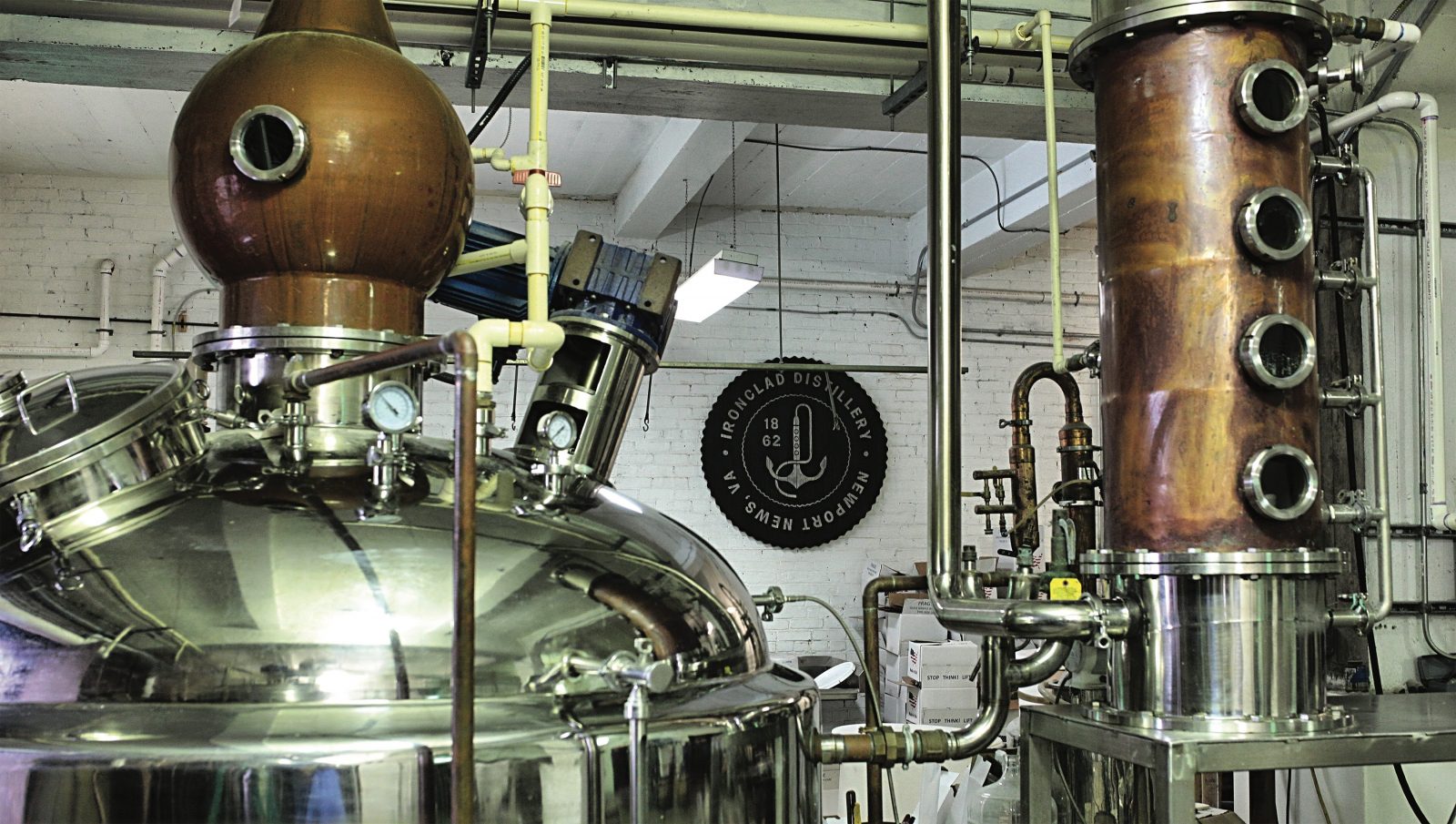 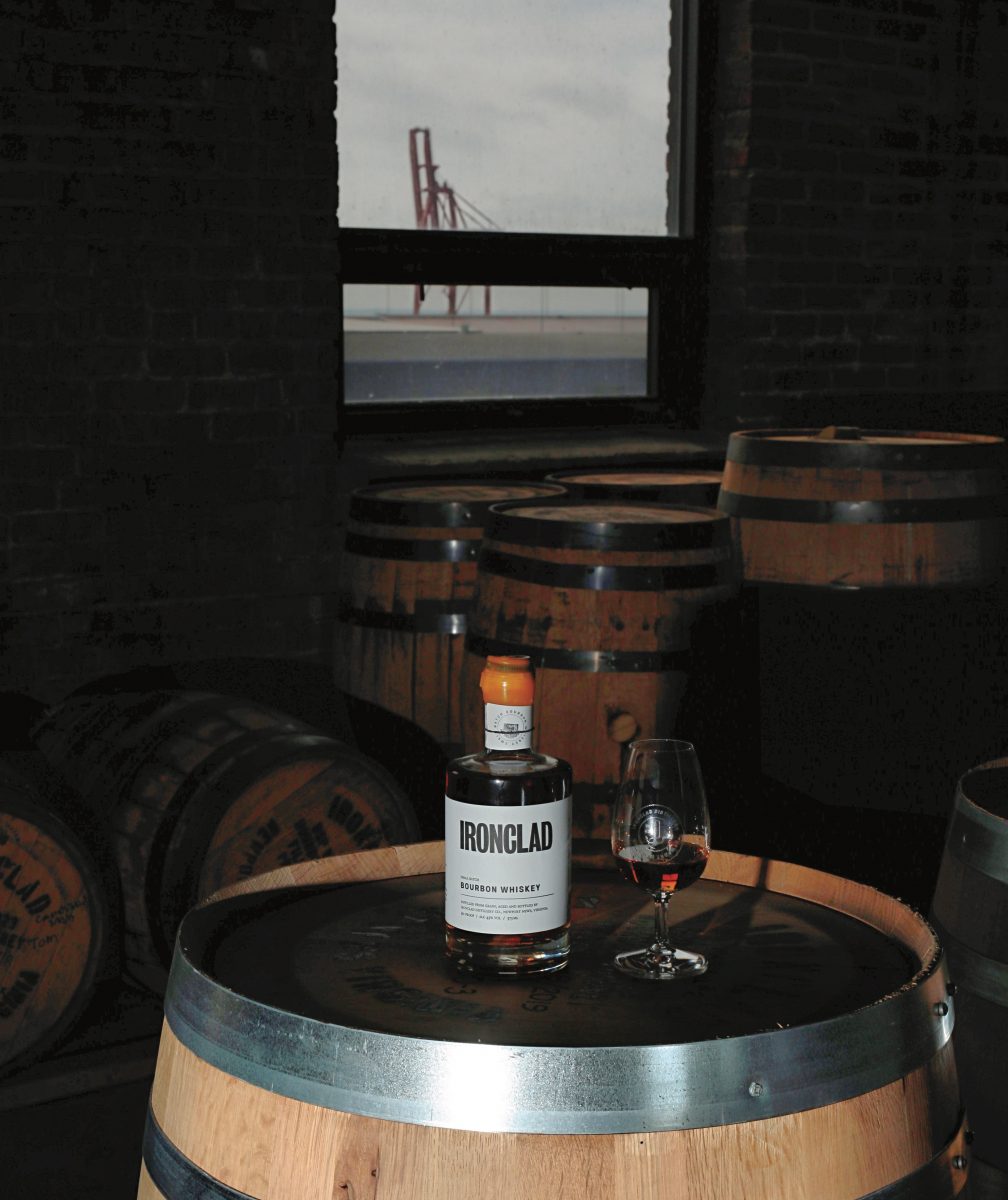 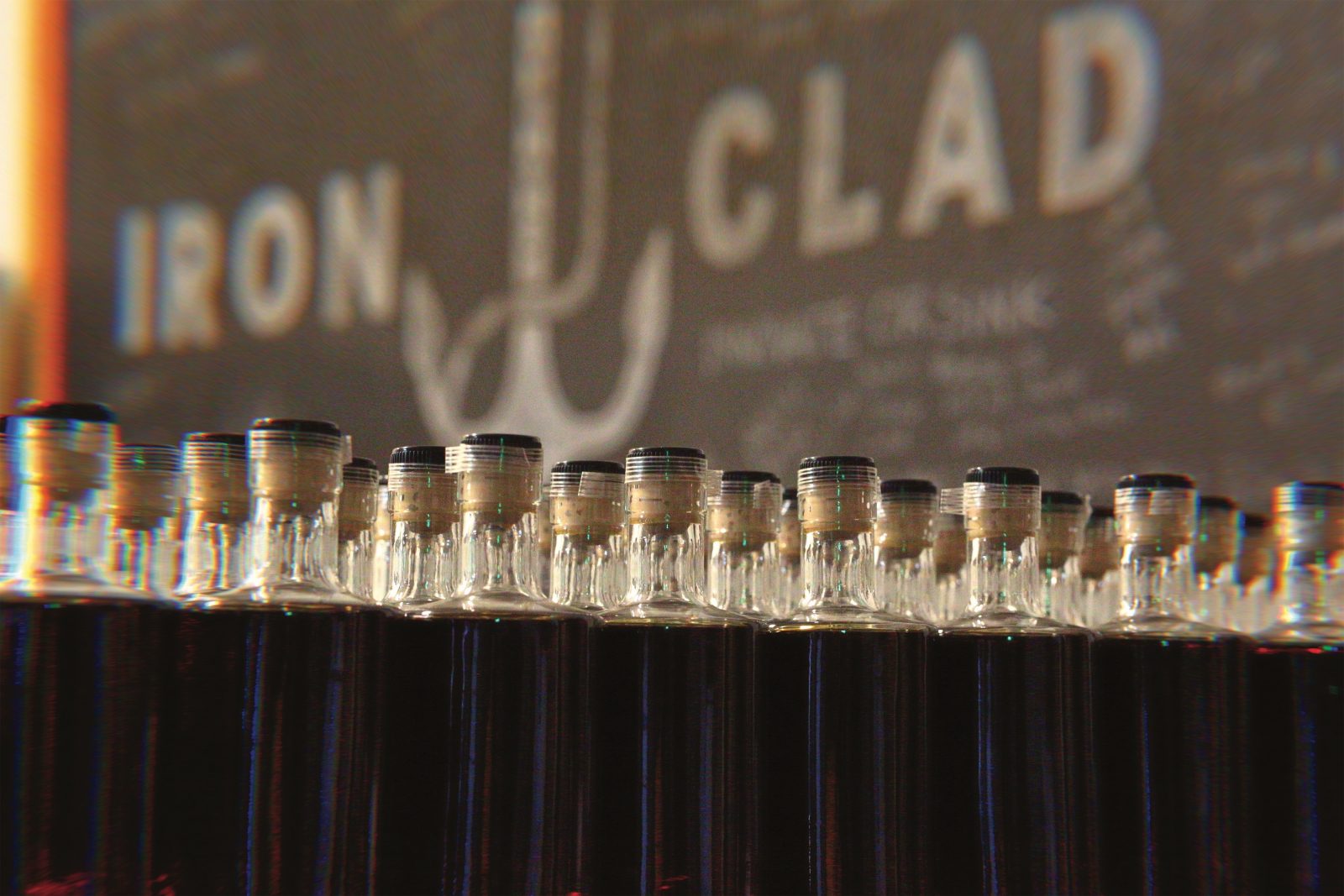 First up on Robert Gregory’s fall menu is the Nitro Noir. It’s alcohol, but it tastes like childhood and is made with vanilla, Cynar and Column 15 coffee. Gregory is the mixologist at Fin Seafood, and his drinks have the uncanny quality of tasting better with every sip. The Nitro Noir is no different, and it takes me back in time to my childhood and then all the way up through adolescence, but after high school it takes a sharp turn and I wind up a tough-talking gangster in a Dashiell Hammett novel. Second is the Cavalcade, a drink that spawns a costume change into a stiff pair of boots, corduroy pants, plaid collared shirt and coat, russet scarf and soft ochre long johns. Scene change to a hayride and then a corn maze and then a foliage tour until I’m snapped back to reality: a drink sits in front of me, a dehydrated lemon the only remnant of the dream it inspired.

Our time is short, so as the tasting winds down, Kara admits “It’s hard to relinquish your baby to someone else, but it’s harder to be everywhere at once.” Every parent can recall the first time their kid went into a daycare or preschool or nestled safely in someone else’s arms. And every small business owner can remember the first time they left their part-time employee in charge of the booth at the festival or relied on the young kid just starting out in the world to close up shop. It’s a scary prospect, but if Ironclad’s growth continues on its trend it may be too late for worry. Their baby may be already grown.

With the bulldozer deep into construction on the new Coastal Fermentory brewery next door, and the abandoned Greek Orthodox church across the street just waiting for the right investor, could this section of Downtown Newport News turn into a hub of distillation and fermentation? The Hotel Warwick was once the center of civic life in this shipbuilding town, but then it burned to the ground. All that remains is one small wing. It’s affordable housing today, and the lobby still swings with splendor. Perhaps in a couple hundred years all of Downtown Newport News will luxuriate in grandeur, style, bourbon and $3 billion submarines.