PlantBar at the Virginia Beach Oceanfront 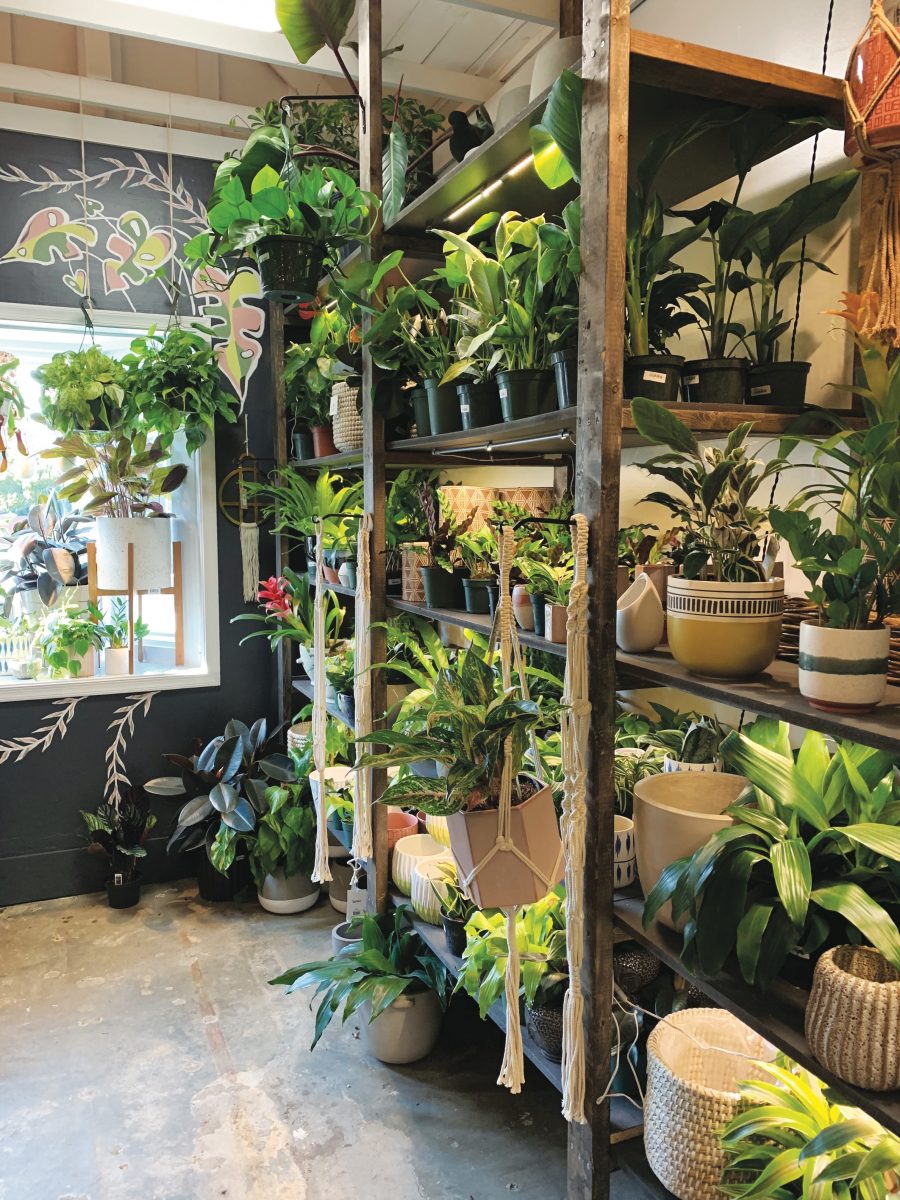 Bailey Ryan is on the forefront of the creative plant industry. Her trendy Oceanfront workshop fosters education and imagination and has sparked a resurgence in modern green spaces. PlantBar’s story, however, is also rooted in the passion and entrepreneurship of Ryan’s parents, Kelle and Elizabeth.

The Ryans’ interest in greenery began about 10 years ago. In addition to their government contracting work, Kelle and Elizabeth transformed their Northern Virginia home into a warehouse for exotic air plants. “We used to import air plants from Guatemala, about half a million a year, and sell them on Amazon, Zulily, Walmart and Home Depot,” explains Bailey. “We had our own website too.”

The online shop rapidly grew into a million-dollar business, offering customers indoor plants and pre-designed arrangements with instructions for step-by-step assembly. The Ryans, however, weren’t the only ones tapping into the terrarium trend. Just as business peaked, the succulent trade became saturated with other green thumb enthusiasts. Bailey then offered a solution. “Once I graduated high school in 2015, I told [my parents] I’d love to be a part of the business, but I want to do something customer facing,” says Bailey. “I want to do something retail, brick-and-mortar. I want to bring people together to have their own experience.”

Bailey’s proclamation came to fruition one year later in the form of a warehouse in Norfolk Industrial Park. The urban property opened in 2016 and doubled as a depository for online orders and a workshop for local customers. “We held workshops, served alcohol and hosted a taco bar. It was basically a $25 ticket that let you make a terrarium, have a few glasses of wine and dinner,” says Bailey.

The family’s success in Norfolk then prompted a year-and-half-long pop-up in Virginia Beach Town Center dubbed Hinterland Trading Company. Bailey explains that Hinterland was her family’s chance to prove the storefront concept independent of online sales. Terrariums showed triumph once again, and the permanent PlantBar space was open for business in November 2018. 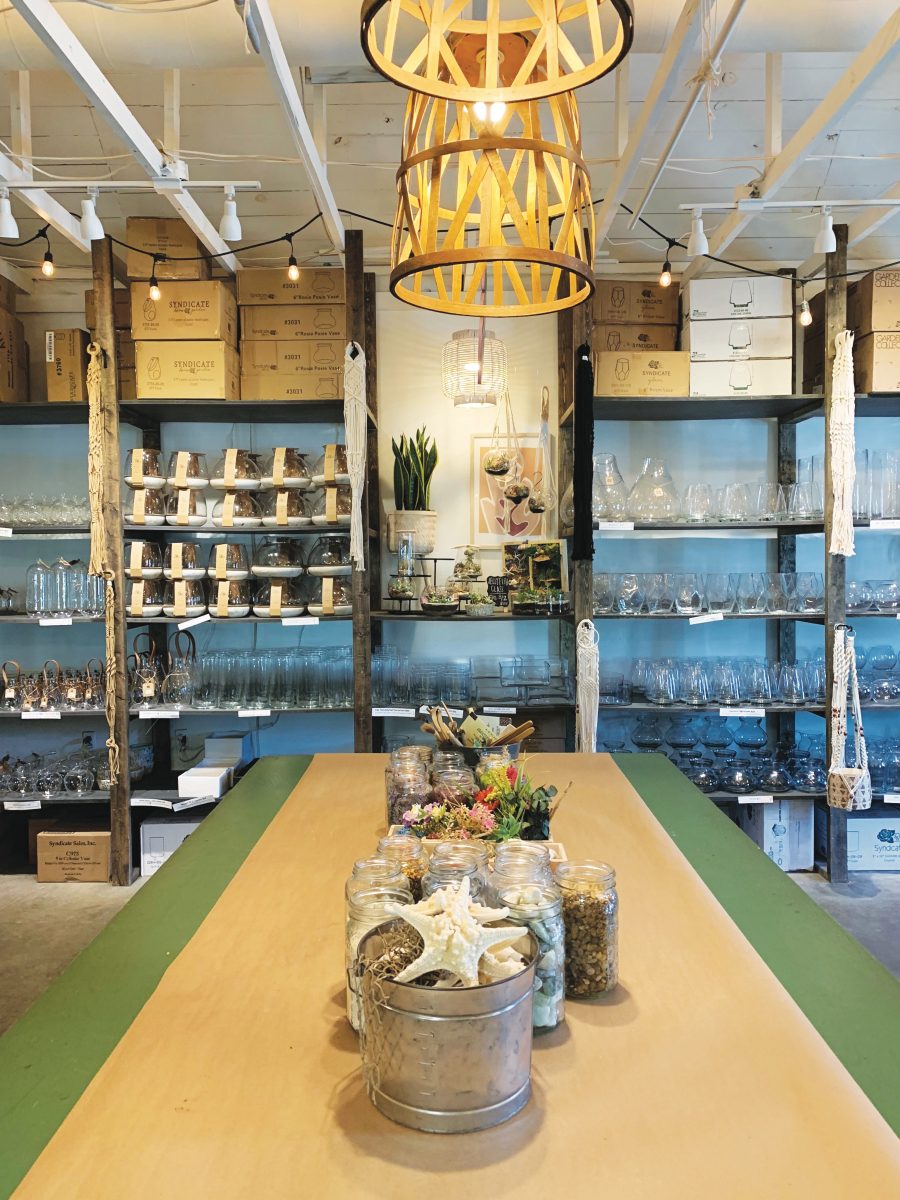 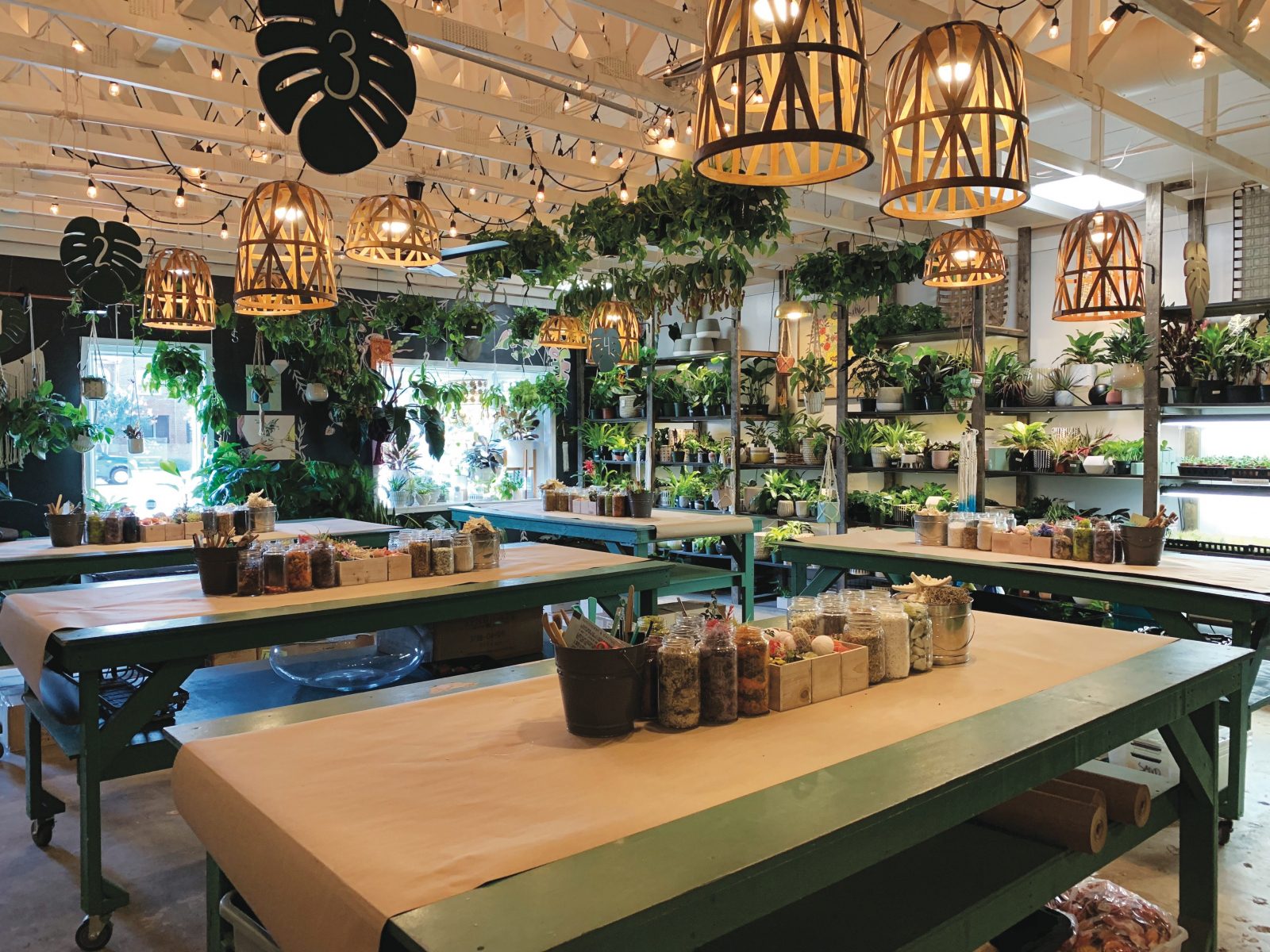 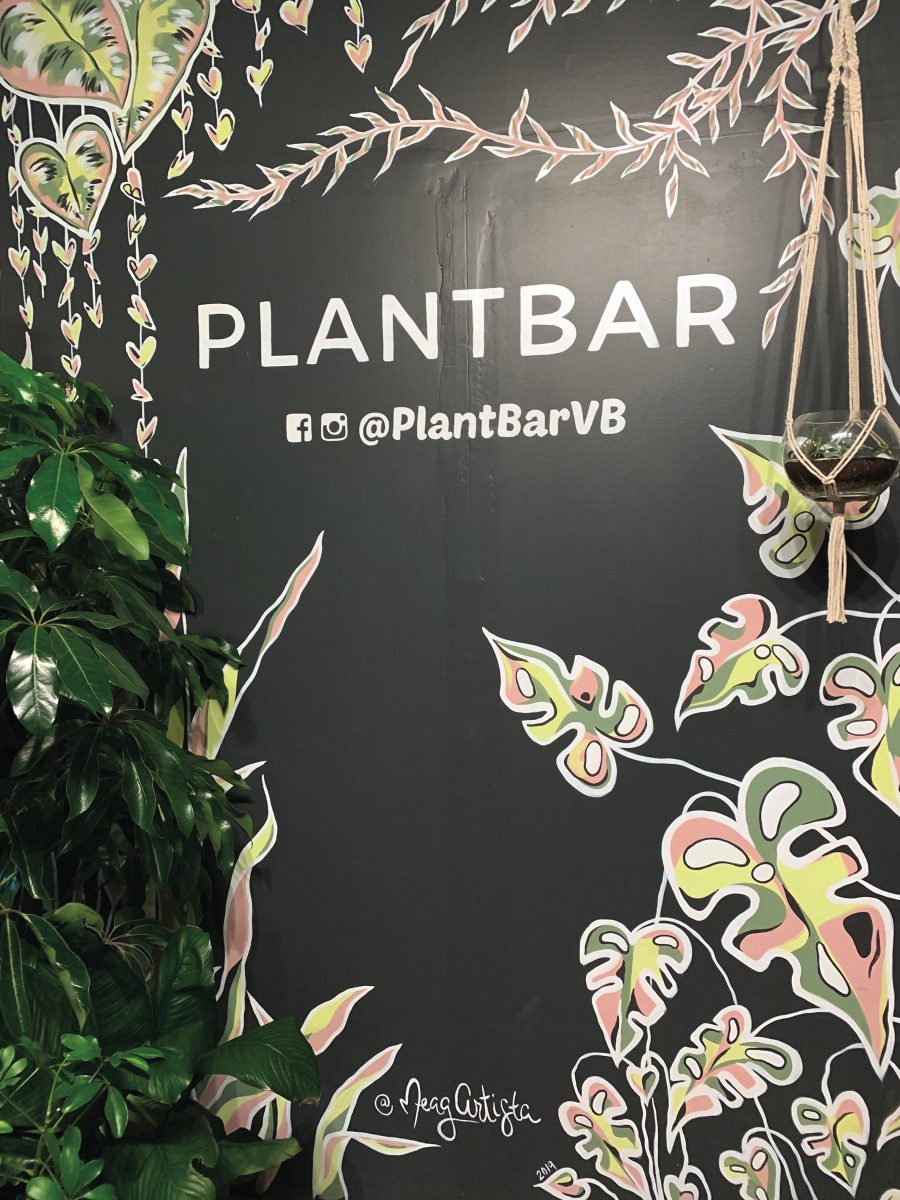 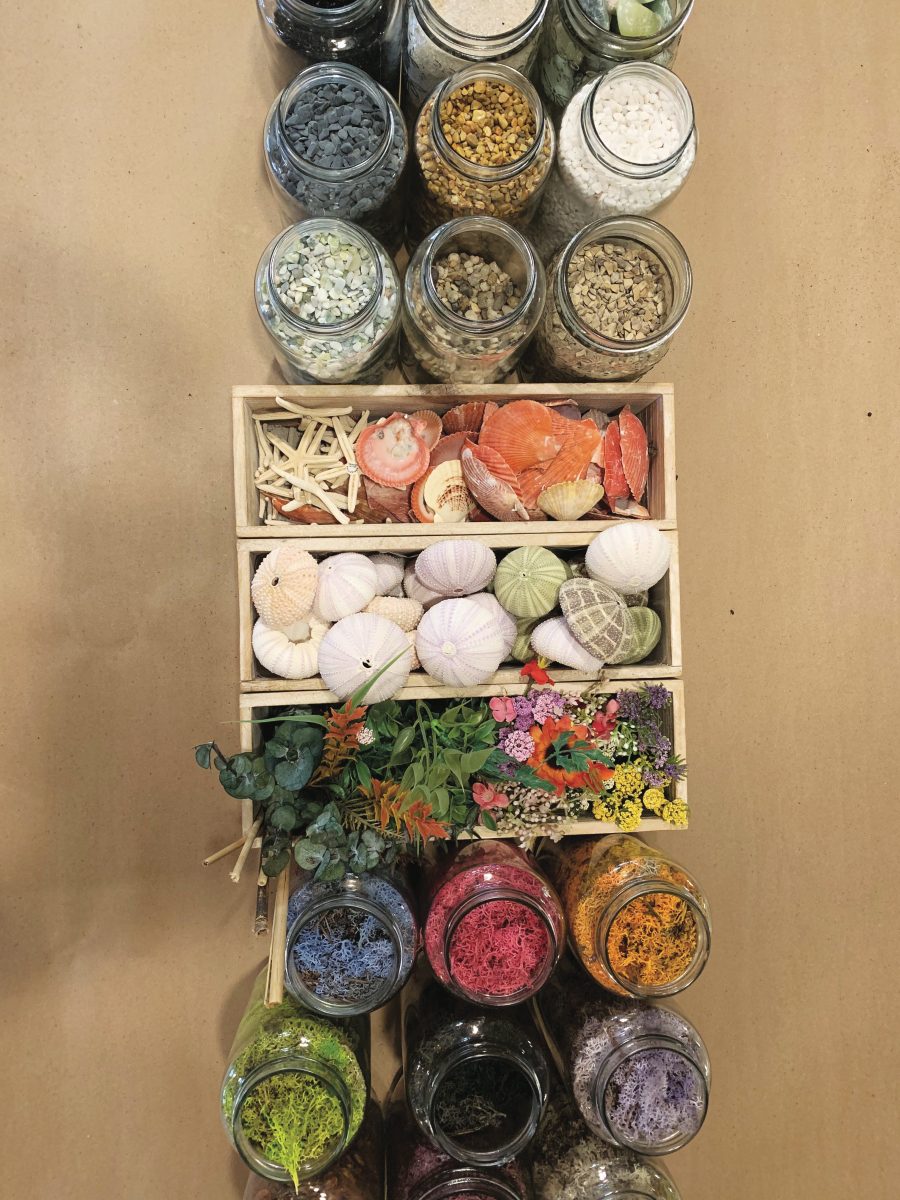 PlantBar’s interior is exactly as you’d imagine—green, earthy and cozy. A handful of workshop tables make up the center of the Oceanfront space and are enclosed by a perimeter of for-sale arrangements and modern ceramics. Bailey explains that most air plants are still imported from Guatemala, but the tropical plants are shipped fresh from a Floridian farm.

At PlantBar, you can build your own arrangement in one of the workshop’s many vases while enjoying Smartmouth beer or wine by the glass. You can also attend themed evening classes on Thursdays, Fridays and Saturdays to create a jellyfish terrarium, macramé masterpiece, moss wall and more. Bailey hosts a series of special workshops as well which have included sushi rolling with Aloha Snacks and floral design with The Wandering Petal.

Of utmost importance to the PlantBar staff is proper greenery care. “We teach you all about the plants,” says Bailey. “We give you care guides and provide the best package to [tend to your plant] after you leave the store.”