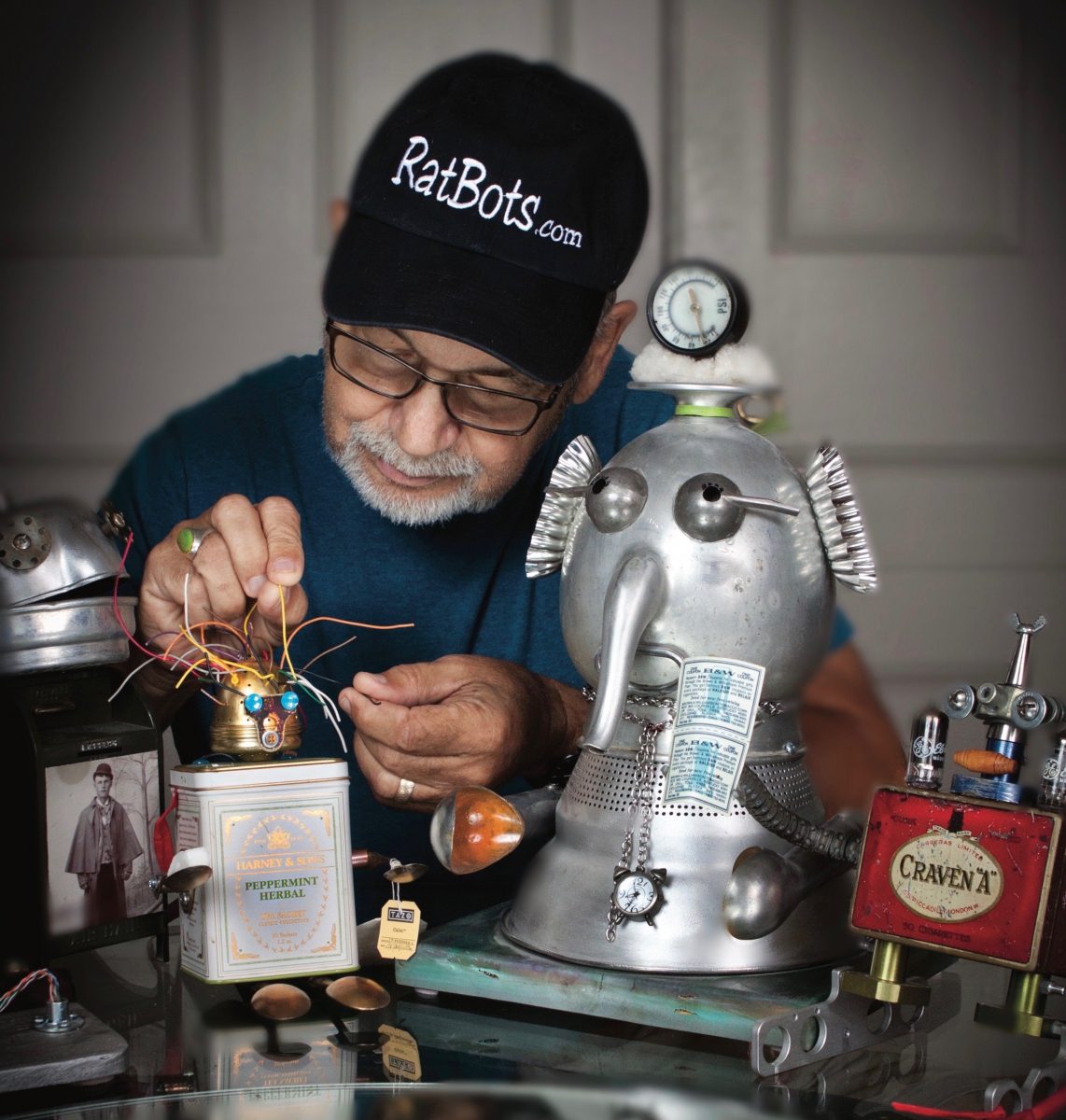 You could say David Ratcliff lives by the R’s found in the hierarchy of waste: reduce, reuse, recycle and robots. Yes, robots. Ratcliff repurposes, restyles and reimagines miscellaneous materials and found objects for his line of Ratbots—skillfully sculptured artwork made of metal, aluminum, steel, glass and jewelry—and has created everything from rambunctious robots to a red-hot rocket ship and a mechanical mosquito.

These bespoke bots make use of vintage pencil sharpeners, antique roller skates, old oilcans, ice cream scoops from yesteryear, discarded silverware and scrapped lamp parts. Each Ratbot is fused with a name and backstory: Ferris Bugler’s Day Off utilizes a bicycle rim and spice tins carrying clay-made musicians playing miniature bugles to resemble a carnival Ferris wheel; the futuristic Marvin Mosquito is an enlarged insect with a yellow mustard can for a body that has become bigger, stronger and aggressive as a result of global warming; and Lens Zee is a desk lamp designed for a pathologist with an Art Deco base, flour sifter head and face of an old microscope lens turret. 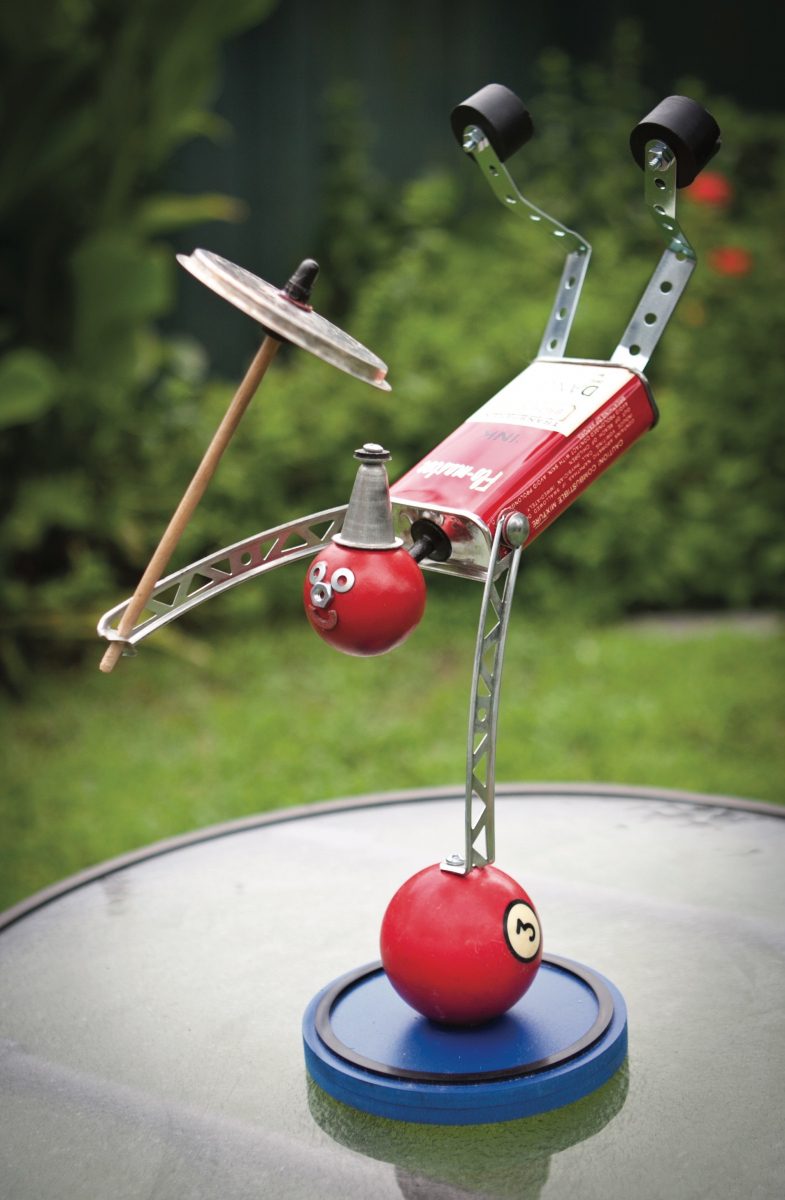 Lens Zee, a desk lamp with an Art Deco base, flour sifter head and face of an
old microscope lens turret 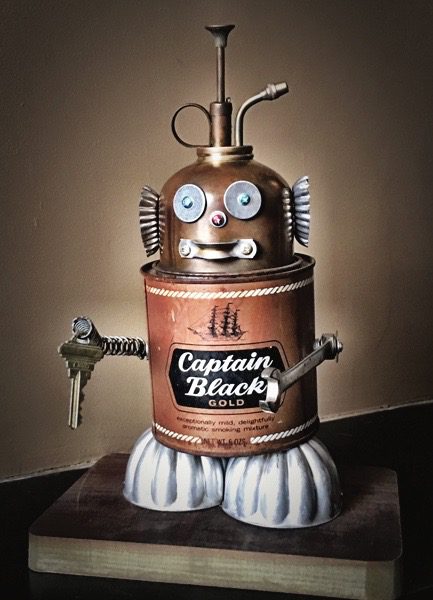 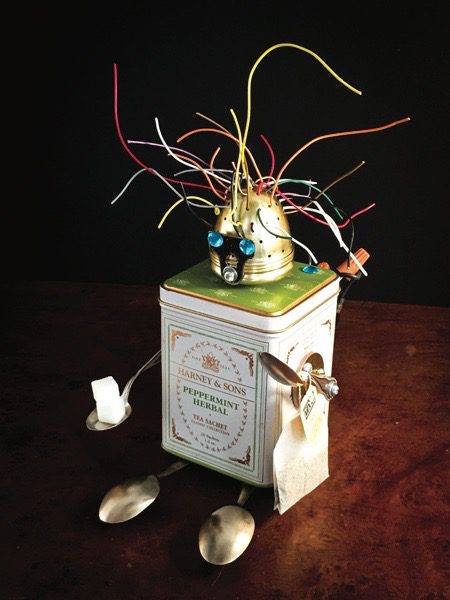 One Lump or Two? 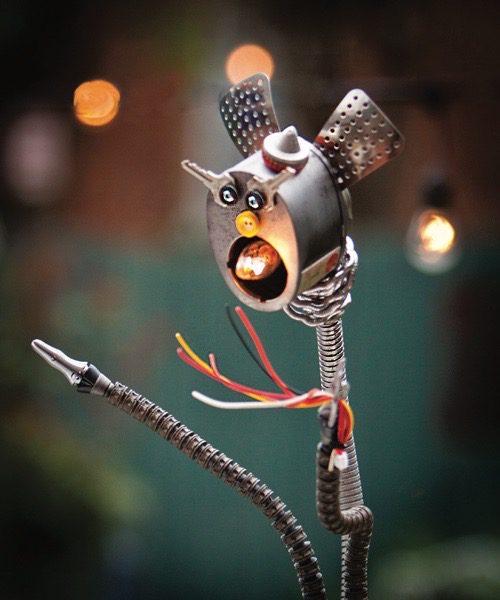 No More Pencils, a desk lamp

Ratcliff has handmade roughly 120 Ratbots in the past few years, each unique, some crafted at request, made within a day or a week and averaging about $125 selling price per bionic bot. The Ratbots are designed and come to life out of Ratcliff’s workshops in his historic home known as the Pass House, a 5,500-square-foot, four-story home in Olde Towne Portsmouth that was formerly occupied by the Union army during the Civil War.

When Ratcliff was a student at ODU, his first job was at the Merchant and Farmers Bank across the street from the Pass House. Ratcliff worked in retail banking, lending, marketing and branch management for 20 years, a profession that was a stark contrast to building bots. “Life sometimes is backwards; you have to do one career path before you go down the other creative path,” remarks Ratcliff. “I remember somebody saying once that, ‘You’re climbing the ladder of success and at some point you look up and realize the ladder was leaned against the wrong building.’”

From his financing, marketing and banking experience, Ratcliff established the basis of his full-time photography business in 1988. He often focused on family portraits for clients on location as far as Southern California and ran his own studio in Chesapeake’s Churchland for 10 years. Ratcliff admits, “I’ve always been more of a right brain-dominant personality. I’m more comfortable building and creating something than I am balancing a checkbook or doing math.” Under the influence of his father who worked in the shipyard, Ratcliff built a hydroplane boat from a kit in high school and worked on cars, motors and other hands-on projects. He’s even invented a vinyl record-cleaning machine known as the Ultrasonic V8.

Ratcliff’s mixed media artwork projects would serve as a predecessor to his Ratbots. Using reclaimed stamped tins from the ceilings of old buildings found from an architectural salvage center, he would produce patterns and designs and mount artwork on these tiles, giving clients a piece of art and history. At the Little Shoppes on High in Olde Towne, he refurbished furniture in inventive ways using exotic paper, paints and hardware to transform and update their designs. In accord with today’s movement of renewal and recycling, creating his Ratbots was a natural progression. 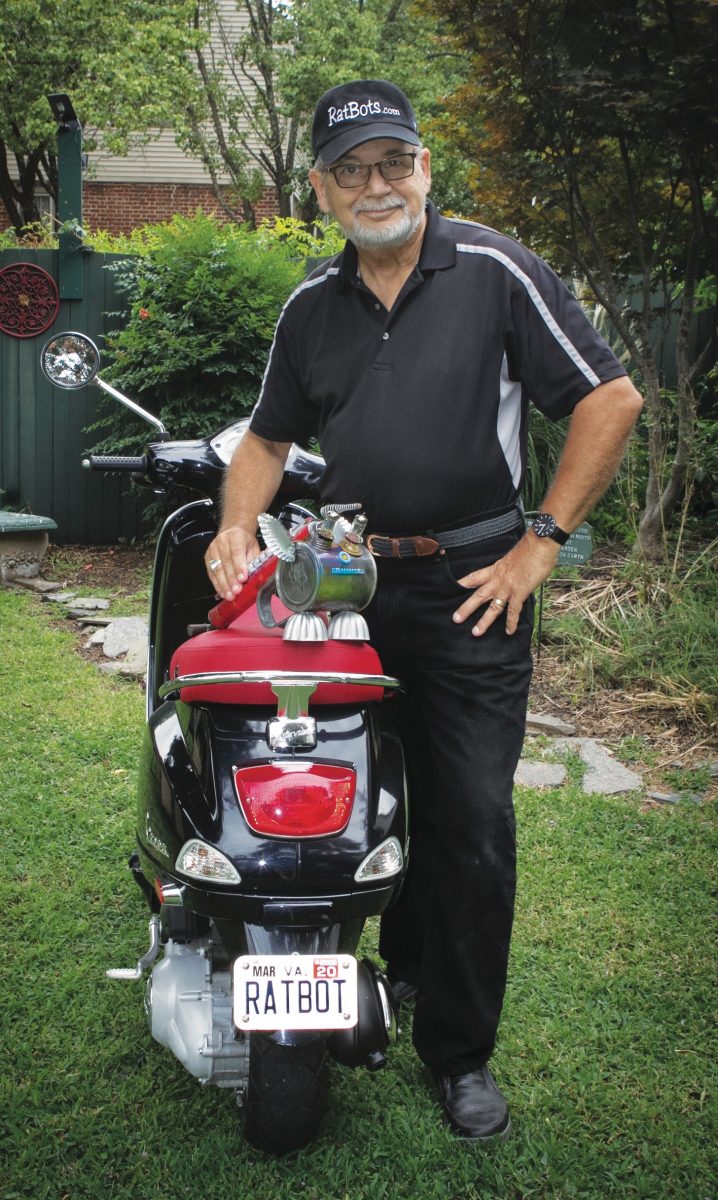 David Ratcliff with his Vespa scooter and a Ratbot

Ratcliff scours all over for nostalgic pieces to make robust robots. “Now when I go to antique shops or flea markets, I’m looking, I’m on the hunt, so to speak, for objects that I can use to make my Ratbots,” explains Ratcliff. Old tins and cans that held coffee, tea or spices with stylish graphics add an artistic merit to his creations. “Sometimes when you’re shopping you just see something like an old aluminum thermos and you say that will make a cool dog.”

He’ll collect a folder of ideas for designs found online, or as a photographer he’ll wander around and take images for inspiration and keep plastic bins with an inventory of his materials, starting with the bot’s body or head prior to puzzling together its arms, legs, feet and other parts. “You’re really starting with nothing,” says Ratcliff. “There’s a Leonard Cohen song that I like…there’s a line in one of his songs that says, ‘making objects out of thought.’ That’s kind of what we do as creative people. You have an idea or a concept and then when you’re finished you have a cool acrylic painting, or a Ratbot or a beautiful portrait framed up [that] somebody has, and you really started with nothing.”

Using drills, screwdrivers, saws, glue, nuts, bolts, a grinder, file and polisher, Ratcliff’s robots are part of an art manufacturing process producing one-of-a-kind collectables fitting the purchaser’s personality. “It’s fun to start with a few boxes of junk and then create something out of that,” Ratcliff tells. “People do like the fact that you’re salvaging things that would normally be thrown away.”

Ratbots can be found in Olde Towne Portsmouth at Twisted Art as well as Stellar Wine Co., a snazzy wine and tapas restaurant owned by Ratcliff’s daughter Mandy Tamplin. Or, you can browse the bots at Ratbots.com and call Ratcliff to make your order for a more personalized, less automated shopping experience. “People really like the humor and the recycling,” Ratcliff says of his artwork. “They do make really good gifts because so many of our friends and relatives are hard to buy for. But I will say this: they don’t have a Ratbot.”