As a staple on stages across the globe, actors, directors and musicians are constantly seeking new ways to reimagine Shakespeare classics into cutting-edge modern performances. Three Shakespearean companies have been successful in doing so and are bringing their one-of-a-kind acts to the lineup of powerhouse performances at this year’s Virginia Arts Festival. Read below for the backstage scoop on the trio of shows taking place this May.

Arriving first to Virginia Beach’s Zeiders American Dream Theater is the Reduced Shakespeare Company and their wickedly hilarious performance of The Complete Works of William Shakespeare (abridged). The abridgement earned the three-man troupe international success at the Edinburgh Festival Fringe in 1987 where they performed all 37 of Shakespeare’s plays and sonnets in a whirlwind of 90 minutes. Nearly 40 years later, the company has come a long way since their start as a pass-of-the-hat act at Renaissance fairs in 1981.

Having performed William Shakespeare’s Long Lost First Play (abridged) in Norfolk in 2017, the company is excited to return to the Virginia Arts Festival. “We love a festival and the one in Virginia Beach is amazing,” says Austin Tichenor, director of the Reduced Shakespeare Company. Tichenor adds, “We love coming back to the festival because when we travel to the same city more than once, we develop a relationship with the city and its audience, so it’s fun to come back and perform for friends.”

Tichenor first joined the company in 1992, replacing original member Jess Winfield, and helped the company expand upon its Shakespearean roots to create several abridged acts of other classic texts from the history of America, the Bible, Hollywood, sports and the history of comedy. “This May, we’re bringing back the show that started it all—The Complete Works of William Shakespeare (abridged),” he says. “There’s lots of running around, lots of coming and going and lots of arguing about the best way to reduce—choosing what should stay and what can be gotten rid of.”

Leading the comical play are three actors cast as a scholar, drill sergeant and innocent child with a strong dislike for Shakespeare. “It’s a genius conceit that three guys calling themselves the Reduced Shakespeare Company would do all of Shakespeare’s plays and sonnets in 97 minutes. If you’re a Shakespeare fan, it’s a huge treat. And if you aren’t a Shakespeare fan or think you hate Shakespeare, you come to this show and go, ‘Oh my gosh, I love Shakespeare’,” says Tichenor.

While Tichenor will be away drafting a new abridgement during this year’s performance, the remainder of the company team will be performing the beloved piece at the Zeiders American Dream Theatre on the following dates:

*This performance includes an explanation by an American Sign Language interpreter 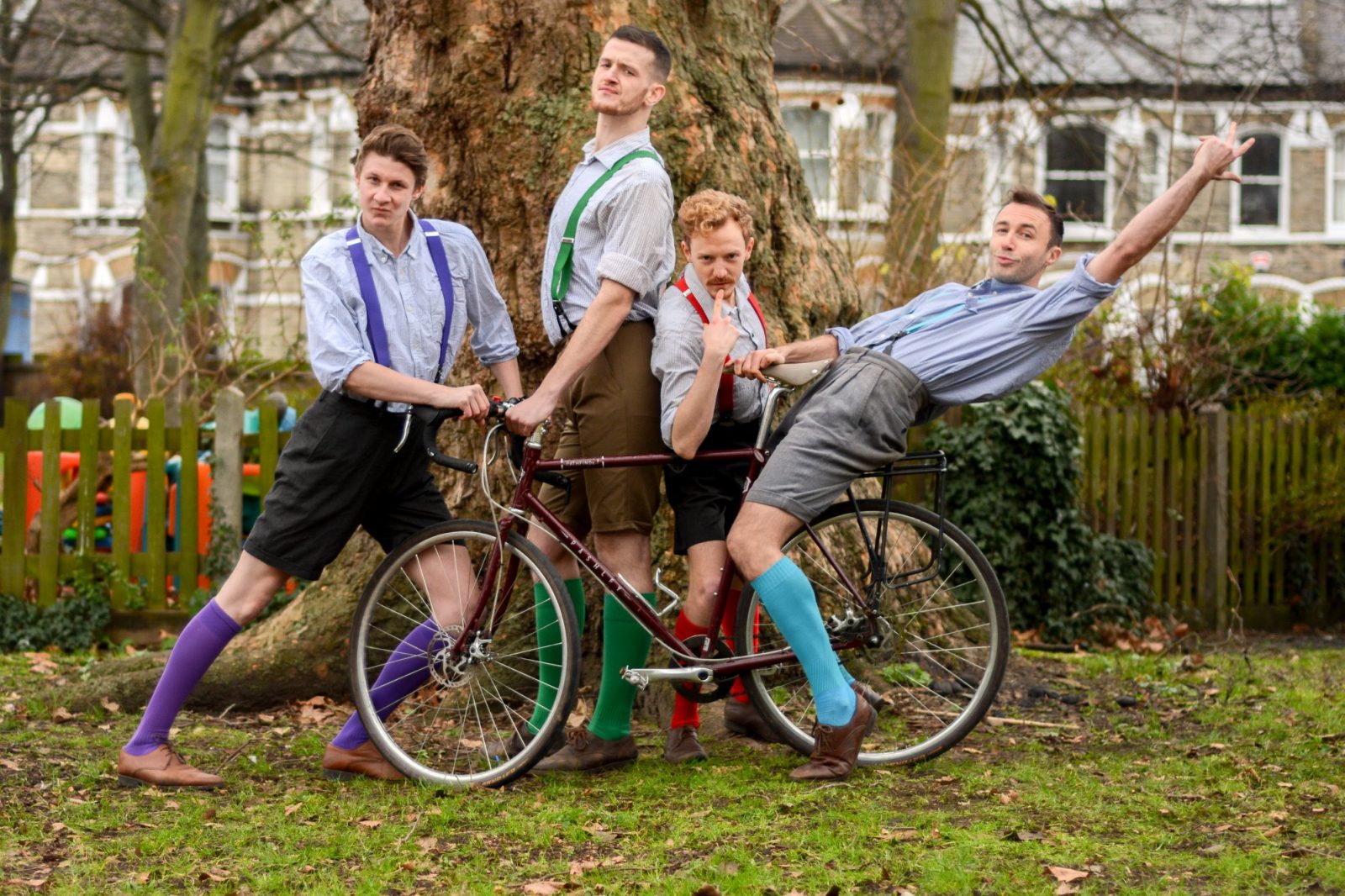 A Midsummer Night’s Dream by The HandleBards

The England-based HandleBards double as actors and acrobats as they pair classic Shakespeare plays with interim bicycle tours. The troupe of performers will travel the Commonwealth’s coast by bike and stop by the region’s plethora of indoor and outdoor stages for playful renditions of A Midsummer Night’s Dream.

The HandleBards caught drift of the Virginia Arts Festival when performing at the Edinburgh Fringe in 2017. In attendance was VAF Executive Director Robert Cross. “[Cross] was so taken with the idea that a troupe of actors would cycle across the country to perform that he invited us along to perform in Virginia,” say The HandleBards. “We’re so excited to be making our United States debut at the festival—it has been a dream of ours for quite a few years.”

Comprising the cycling company are HandleBards founders Tom Dixon of Liverpool and Paul Moss of Manchester, as well as longtime company performers Matt Seager of Wimbledon, London and Calum McIntosh of Twickenham, London. Each actor plays a host of different characters throughout their shows. “There are only four actors in the production, which adds to the calamity of an already chaotic play, but above all it’s the fact that every show is different. Each show involves the audience and the venue, so you can never expect to see the same show twice,” explains the troupe.

The HandleBards boast years of performances in 15 countries across the globe by both their all-male and all-female groups. The group asserts, “The cast have been touring the show for so long that they know the play, and each other, like the back of their hands, so they always keep things on track no matter what might come their way each night.”

Join The HandleBards as they celebrate Norfolk Bike Month in conjunction with the 23rd Annual Virginia Arts Festival. Select performances are followed by group rides through some of Coastal Virginia’s most distinguished areas. The show schedule is as follows:

Tuesday, May 21: Performance at the Portsmouth Art & Cultural Center at 6:30 p.m. A pre-show ride is scheduled from Downtown Norfolk to Portsmouth by way of the Elizabeth River Ferry.

Wednesday, May 22: A group ride to the Virginia Arts Festival Courtyard precedes a 6:30 p.m. show.

Saturday, May 25: Performance at Jamestown Settlement in Williamsburg at 3:30 p.m.

All shows are free and open to the public with gates opening one hour prior to each performance. Due to the nature of each venue, lawn chairs and blankets are encouraged. Food and drinks will be available for purchase. 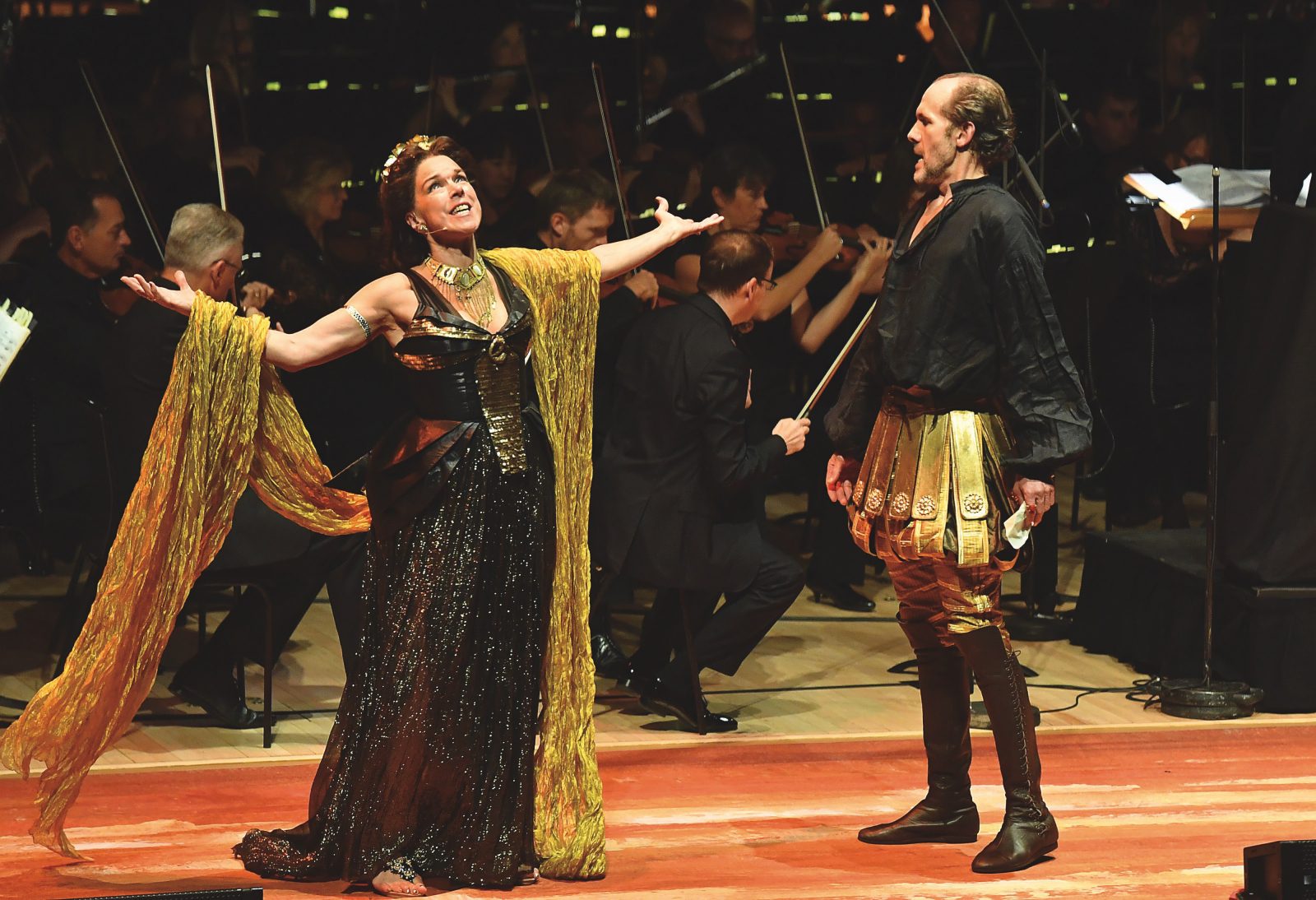 Possibly one of the most highly anticipated events of the 2019 Virginia Arts Festival is the East Coast premiere of Antony & Cleopatra by Concert Theatre Works. The symphony-play hybrid produced by London’s Shakespeare Globe Theatre has been performed only twice before—first in full at the Barbican Centre in London and secondly, a truncated version at the Hollywood Bowl in Los Angeles.

This constellation of Shakespeare and classical music tells the tale of two intensely passionate people whose movements are captured by talented Globe actors and whose emotions are articulated by a superb score performed by the Virginia Symphony Orchestra.

Bill Barclay, director of music at Shakespeare’s Globe Theatre, explains that the original score for Antony & Cleopatra was scripted in June 1920 by Florent Schmitt. The musical suite accompanied a six-hour production directed by André Gide and survived less than a dozen performances at the Paris Opera. Despite its flop, Schmitt deemed his work worthwhile and transformed incidental music and dance numbers from the original score into two concert suites. The fragments of Shcmitt’s work were later discovered by Virginia Symphony Orchestra conductor JoAnn Falletta.

Barclay first discovered Schmitt during Falletta’s adaption of the titanic Antony & Cleopatra piece at the Buffalo Philharmonic. Her work not only attracted the attention of Barclay but of the BBC Symphony Orchestra as well. In 2015, the orchestra approached Barclay with the proposition to adapt the Shakespearean suite to a stage piece. “I leapt at the opportunity because of the high quality of [Falletta’s] recording and how beautiful she made the music sound,” says Barclay. “She was the catalyst of the London production without knowing it. She was also the catalyst for bringing the show to the Virginia Arts Festival.”

Barclay spent upwards of three months piecing together the notes, illustrative sounds and pictorial harmonies that remained from Schmitt’s original score. “In going back and marrying the [music] to the play, I had none of his notes, none of the original incidental music, all I had was music for the suites, so I took those suites, cut them up and put them into service for telling the story of the play with Shakespeare’s text,” explains Barclay.

The East Coast performance of the Shakespeare-Schmitt mash-up is one Barclay is particularly excited for. “I admire the Virginia Arts Festival for its range of programing and the amount of excellence it attracts,” he explains. “Norfolk is an absolutely fine place. It’s a beautiful city with lots of culture and lots of international curiosity. Being as it is on the East Coast, it’s a throughway and natural meeting place for the arts.”

Antony & Cleopatra will be performing across the pond at the Ferguson Center for the Arts in Newport News on Friday, May 17 at 8 p.m. and at Norfolk’s Chrysler Hall on Saturday, May 18 at 8 p.m.