Simplifying with Style at Home

Marie Kondo has nothing on Trish Pfeifer. Kondo, the Japanese doyenne of domesticity, is a professional organizer and wildly popular author whose name has become synonymous with stylish, Zen-like decluttering.

However, the mention of thanking objects for their service before 86-ing them or holding each one aloft to determine if it “sparks joy” elicits a snort and an eyeroll from Trish and a joke from husband Ken. He suggests that what sparks joy for his wife is a sprint to the dumpster or the donation center.

It’s not that Trish doesn’t honor objects. She just goes about it differently, including jettisoning anything extraneous so that the chosen few can have their due. Having lived in a succession of historic homes in Portsmouth and, now, West Ghent, she has mastered the fine art of making quirky spaces work for today’s lifestyles instead of the other way around.

With an admittedly pared down aesthetic and an aversion to disorganization—she and Ken are both retired teachers and active in the visual and performing arts in Norfolk—Trish has developed a three-prong approach to beautiful and tidy living.

Though the entire Pfeifer residence once prompted a guest to ask if their home always “looked that way or if they had cleaned up for company,” we have chosen to hone in on the master bedroom. This is a space that, for some, becomes a multi-functional den of dysfunction, as private spaces are want to do when time is short and demands are high.

One of Trish’s tricks for decluttering is to conceal what would otherwise appear unsightly and disrupt the visual harmony of a space. Take Ken’s CPAP machine for instance, and the somewhat less offensive alarm clock. Rather than display these items on nightstands, Trish did some careful measuring, found an extremely shallow console table, moved the headboard of the bed away from the wall a very few unnoticeable inches, and slid the table into the space to accommodate those items. If the console were seen, it is a fashionable, but affordable, reclaimed wood and metal style.

With the bed placed against two walls—Ken is a sleepwalker and this strategy helps him stay put—only one nightstand was necessary. Sitting on top is a tall, narrow decorative bucket. Inside, the couple stows hand lotion, a remote control for the TV and the like, corralled and completely concealed for a very neat, yet appealing, look.

The Pfeifer’s 1918 home now has central air and heat, but the old radiator valves contribute a bit of visual clutter, if character. A tall goat sculpture by local artist Lorraine Fink sits in front of one, rendering it barely noticeable. At the entrance to their bedroom/sitting room is their beloved dog Dottie’s black metal crate.

Trish had seen coverlets draped over the top and sides of crates, but too much fabric gathered at the corners kept that look from being quite sleek and tailored enough to fit their pared-down aesthetic. She had an upholsterer create a linen slipcover that is a perfect fit, creating flat sides and crisp corners. On top perches a dog sculpture purchased from a museum gift shop that serves as a focal point.

Hundred-year-old homes come with small closets, by today’s standards, requiring homeowners to get clever if they want to stave off chaos. In their diminutive space, Trish refashioned a simple coat tree as a holder for costume jewelry.

Water bottles from the dollar store are pressed into service as boot shapers. And shallow pull out drawers from a wire closet system in another home keep necessities accessible. Silverware trays inside some of the drawers keep the likes of keys and wallets in their own lanes, but at the couple’s fingertips. 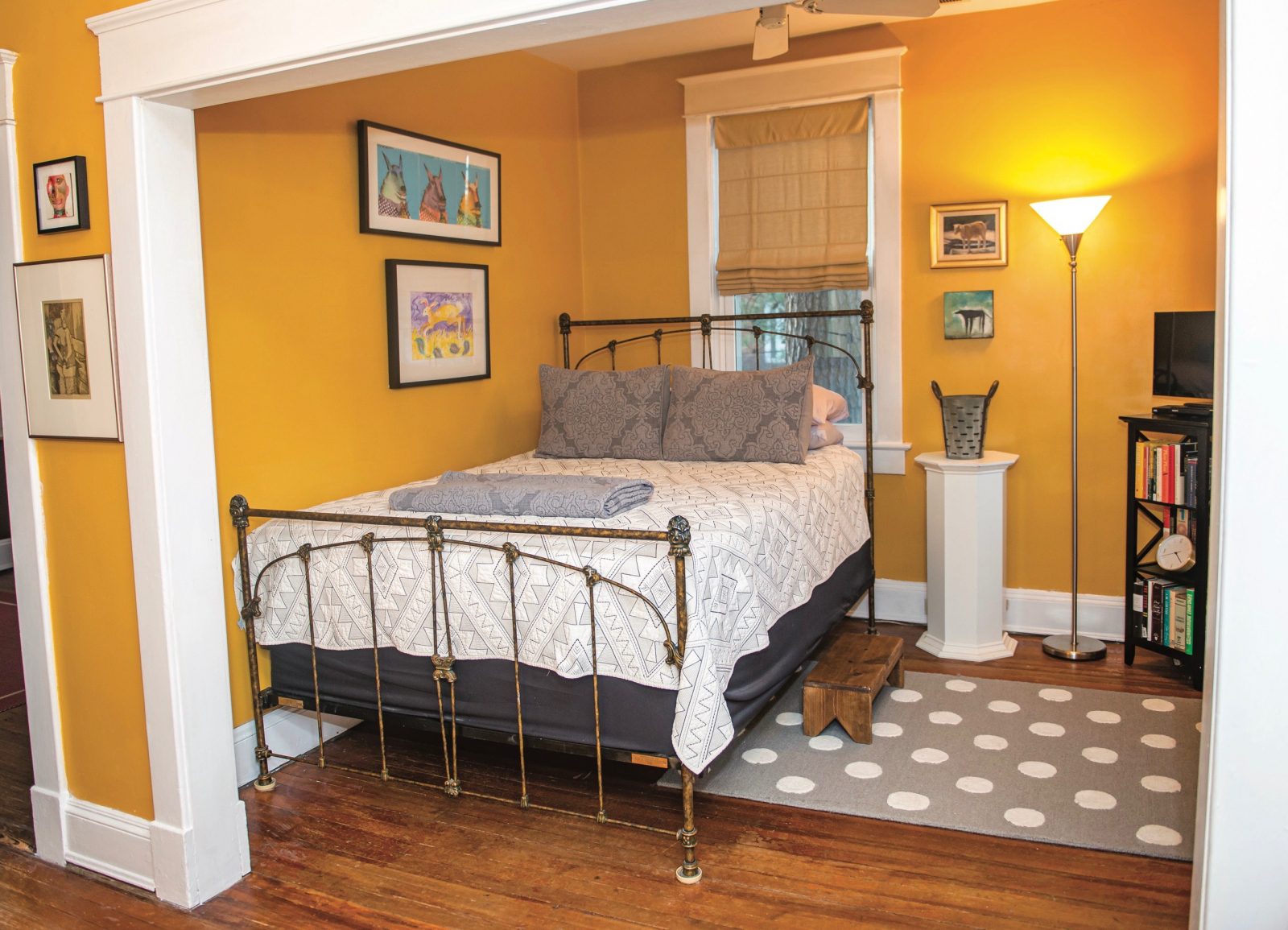 Photos by David Uhrin
Hidden Necessities: A narrow unnoticeable space between the Pfeifers’
headboard and wall conceals a slim console table that holds Ken's CPAP machine
and a radio. On the pedestal nightstand, a stylish metal bucket corrals the TV
remote and hand lotion. 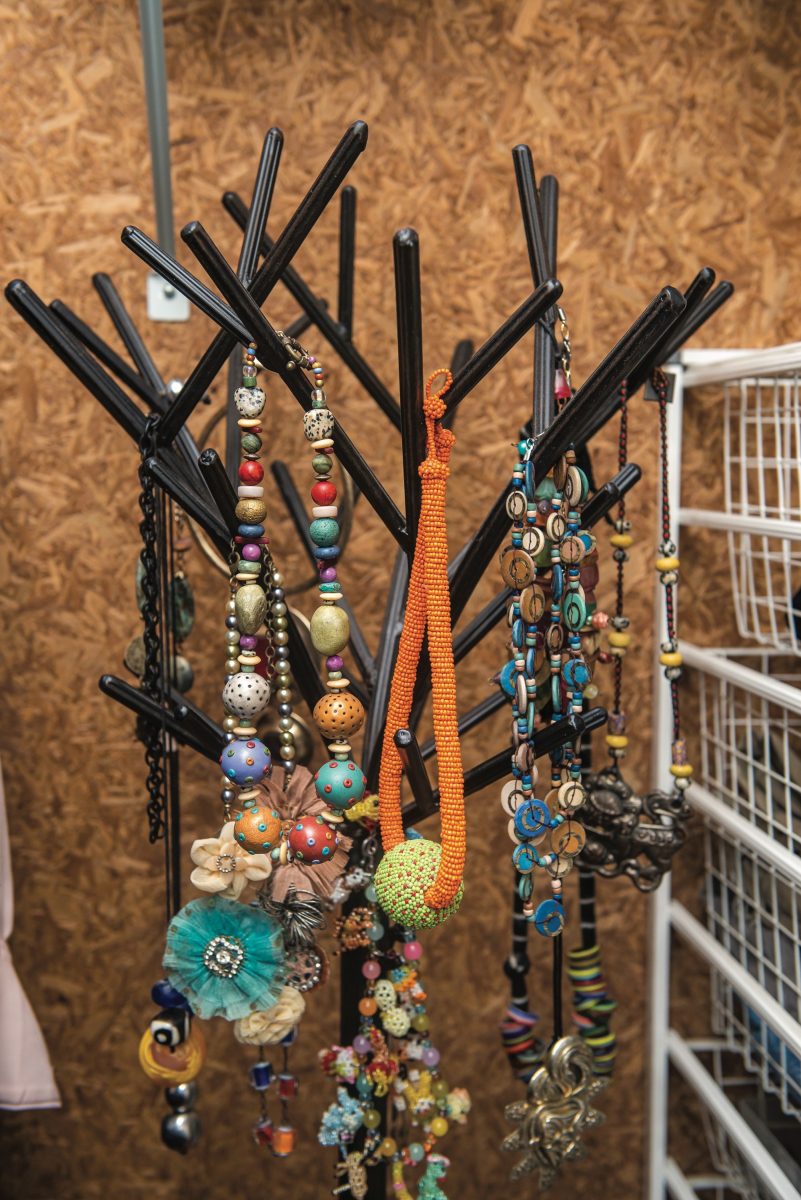 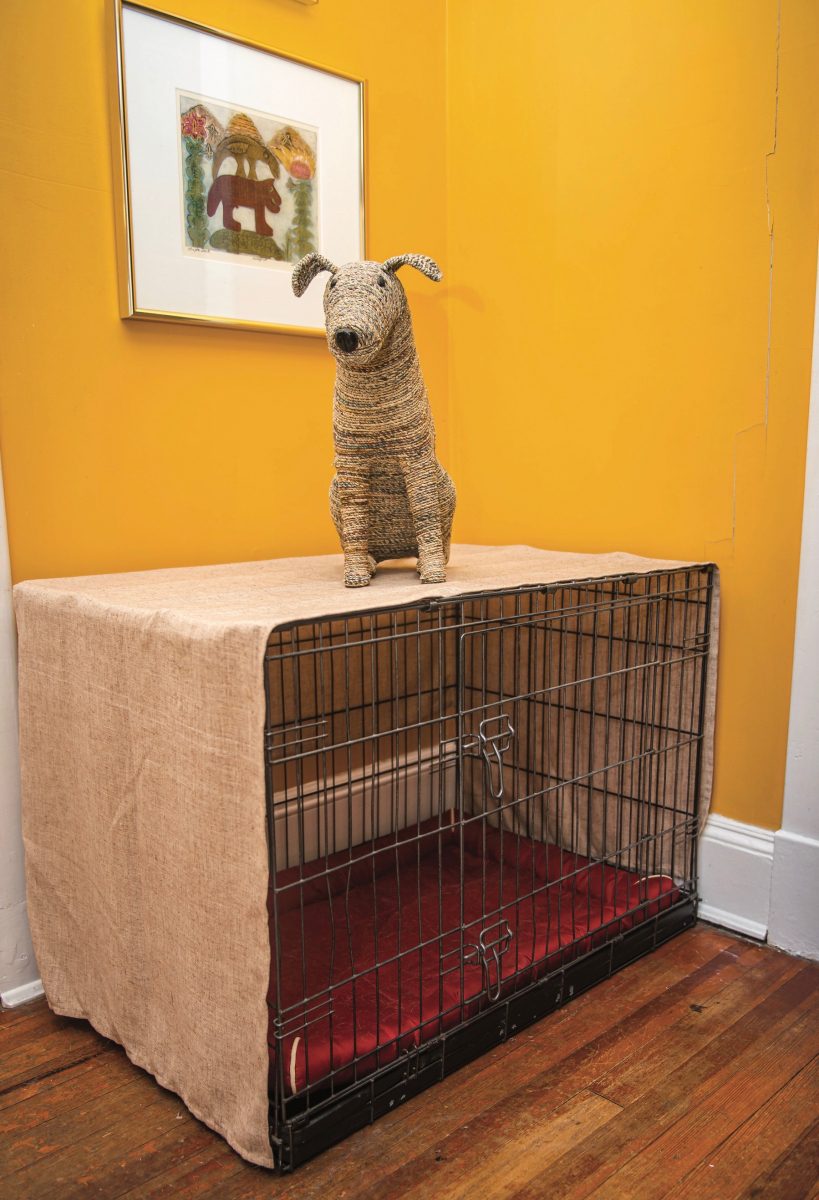 Canine Camouflage: A custom-made slipcover camouflages Dottie's crate while a
canine sculpture on top creates a "folk-al" point to further downplay the crate at the
entrance to the couple's bedroom. 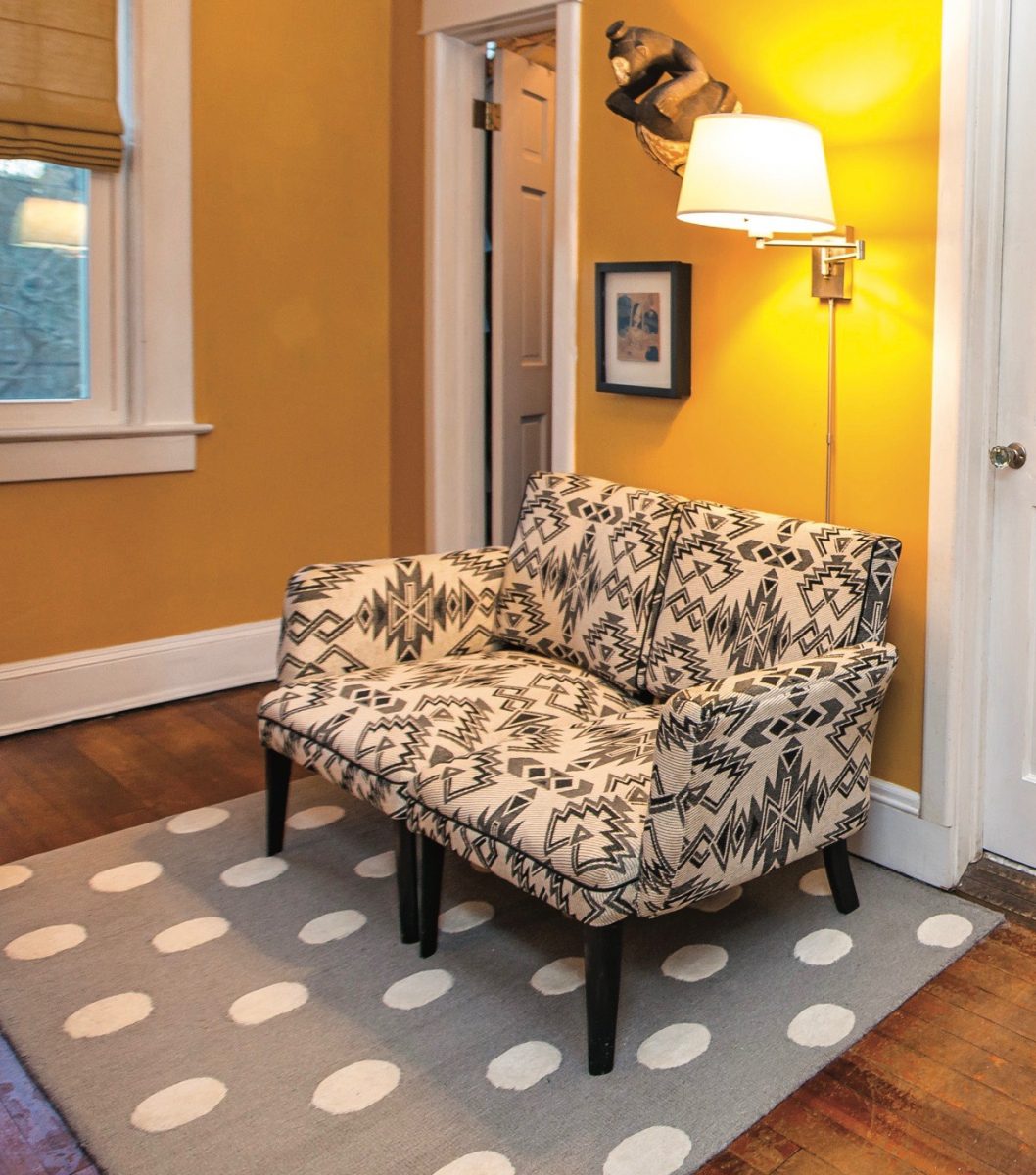 Sit and Store: With a TV purposefully placed so as to be difficult to see when lying
in bed, this tailored settee helps ensure that all TV watching is intentional. 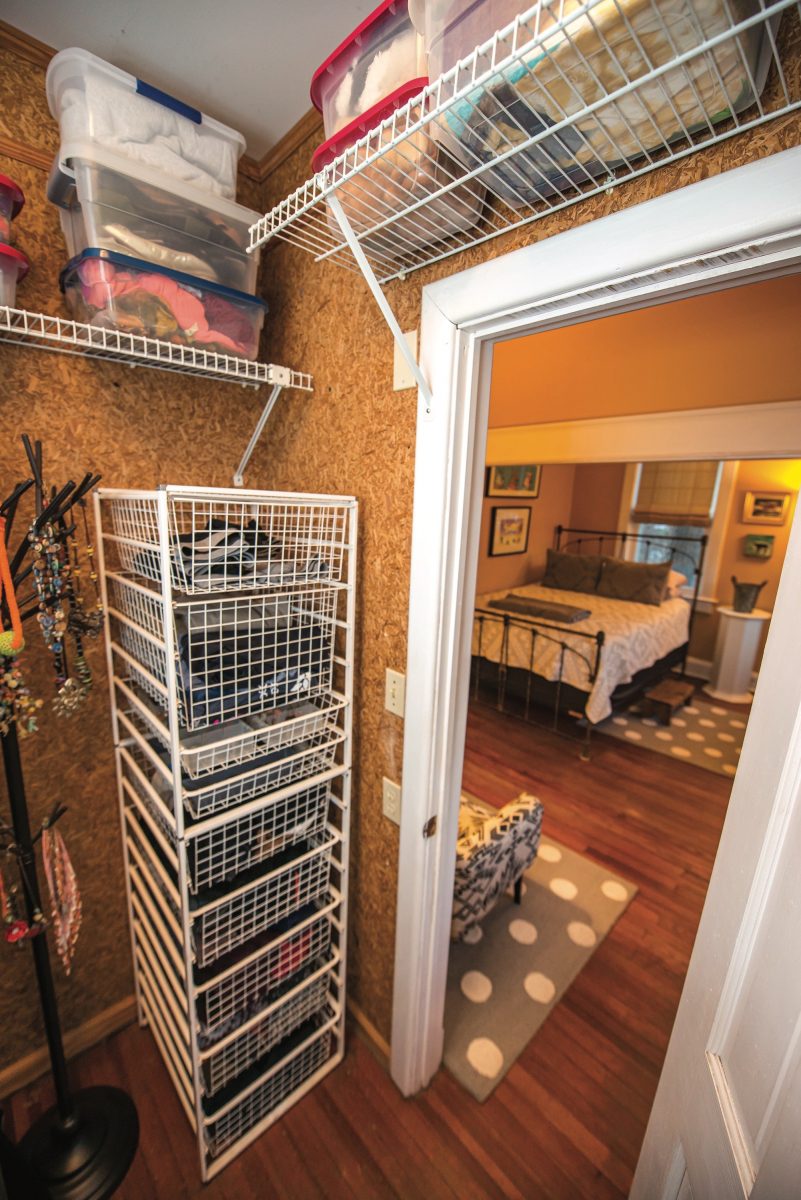 Stowed Away: A stack of pullout wire baskets in the small closet makes items
visible but somewhat concealed for an uncluttered appearance. 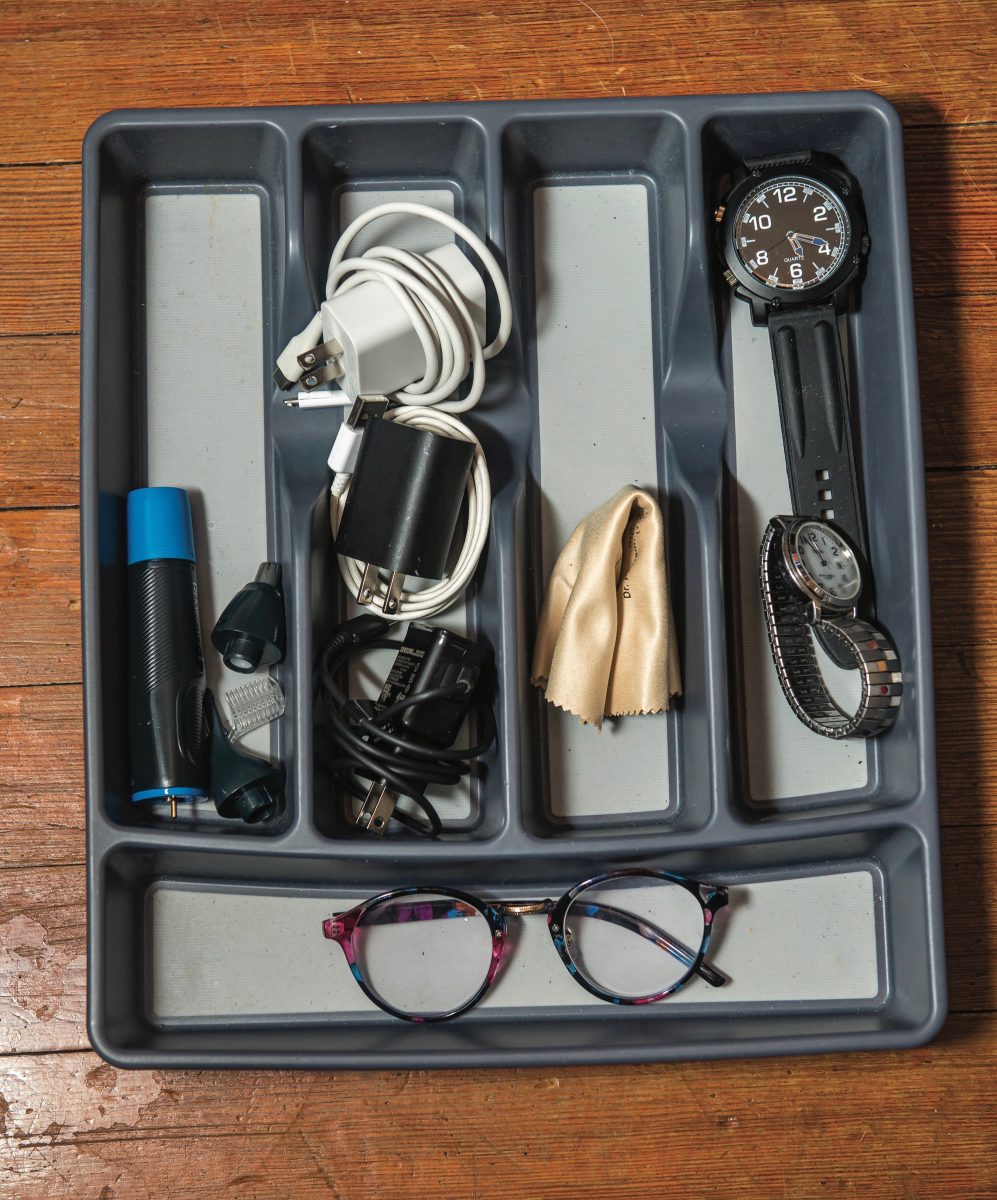 Perfectly Practical: The Pfeifers' converted flatware divider is a handy catchall for
glasses, watches, cords and the like. 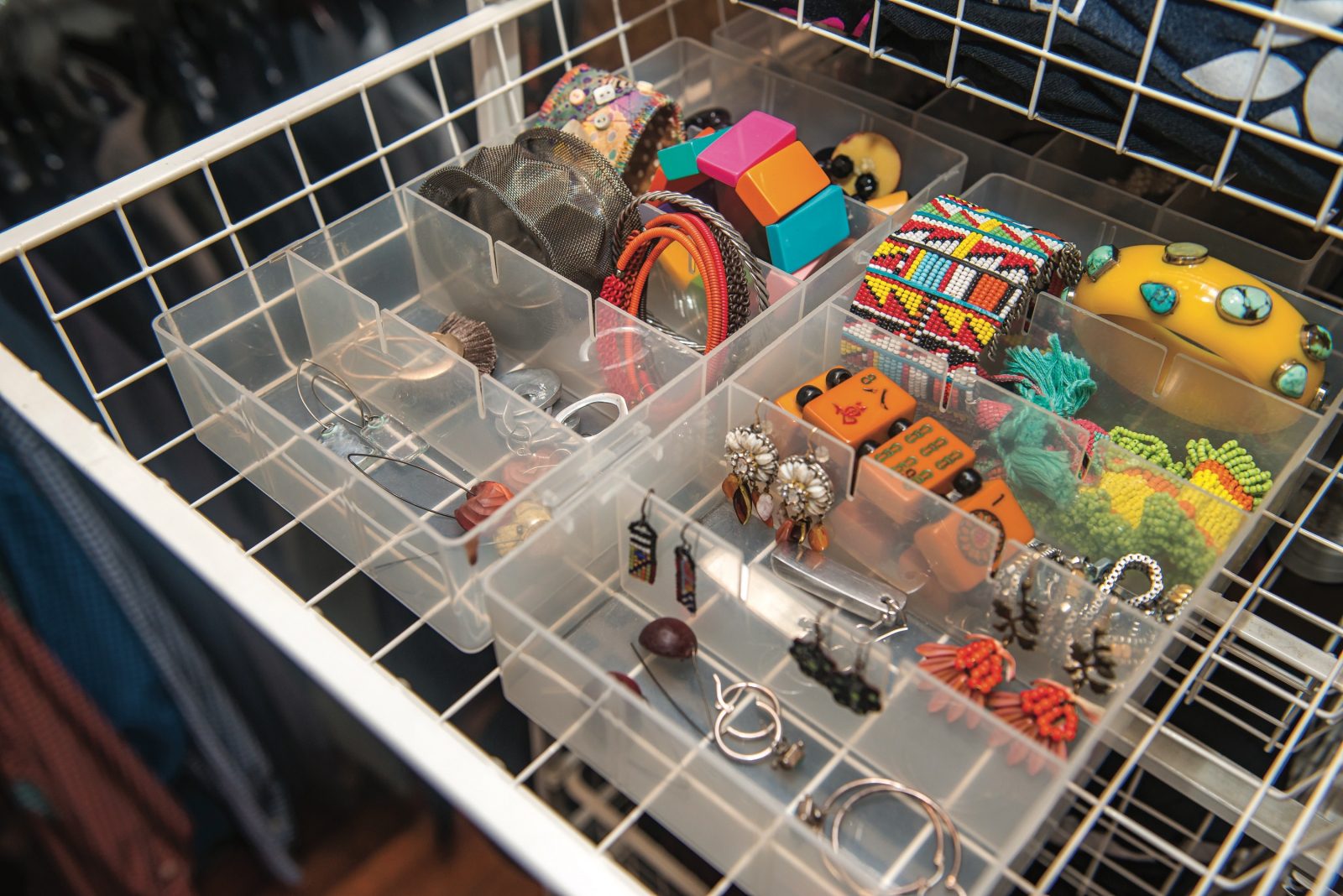 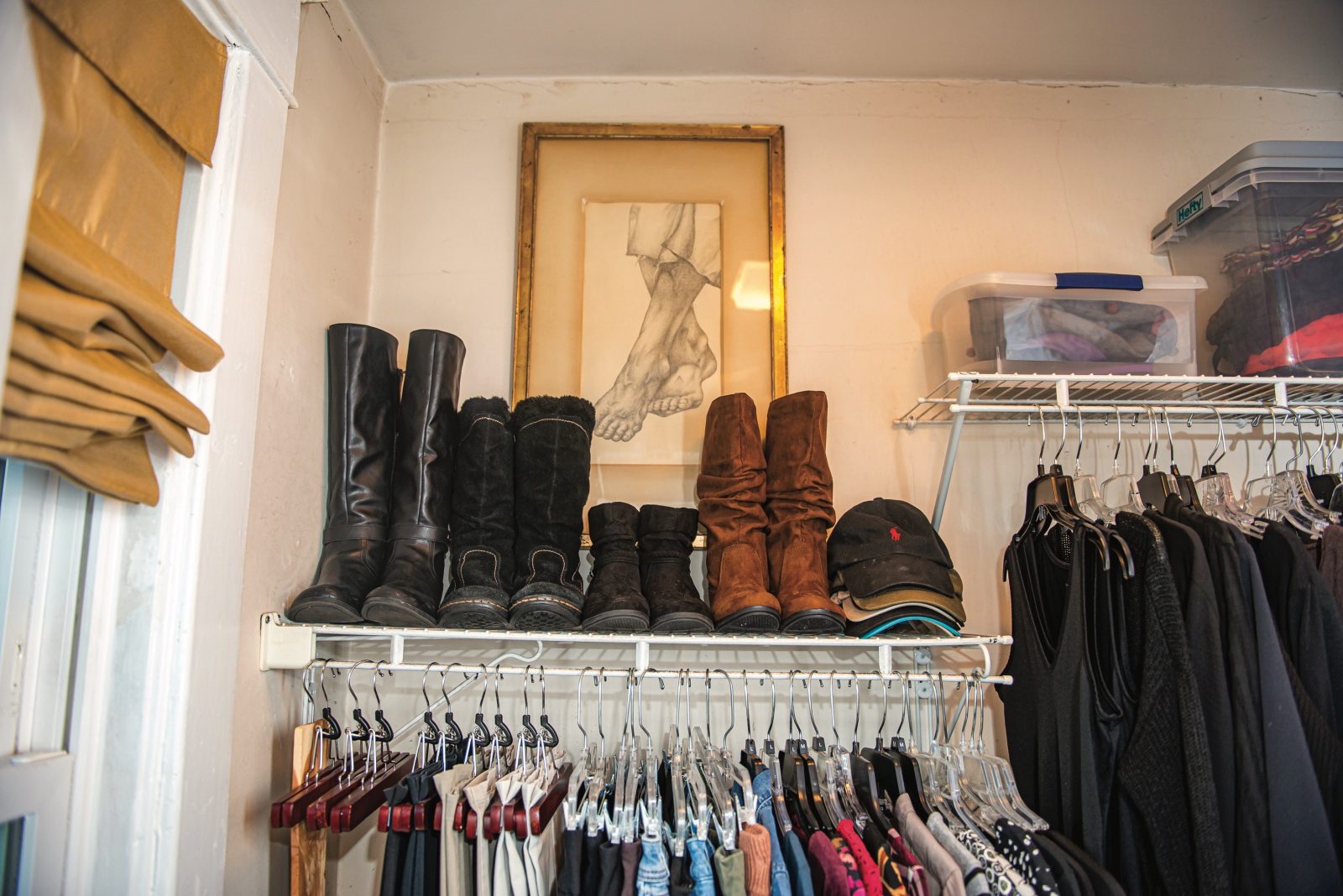