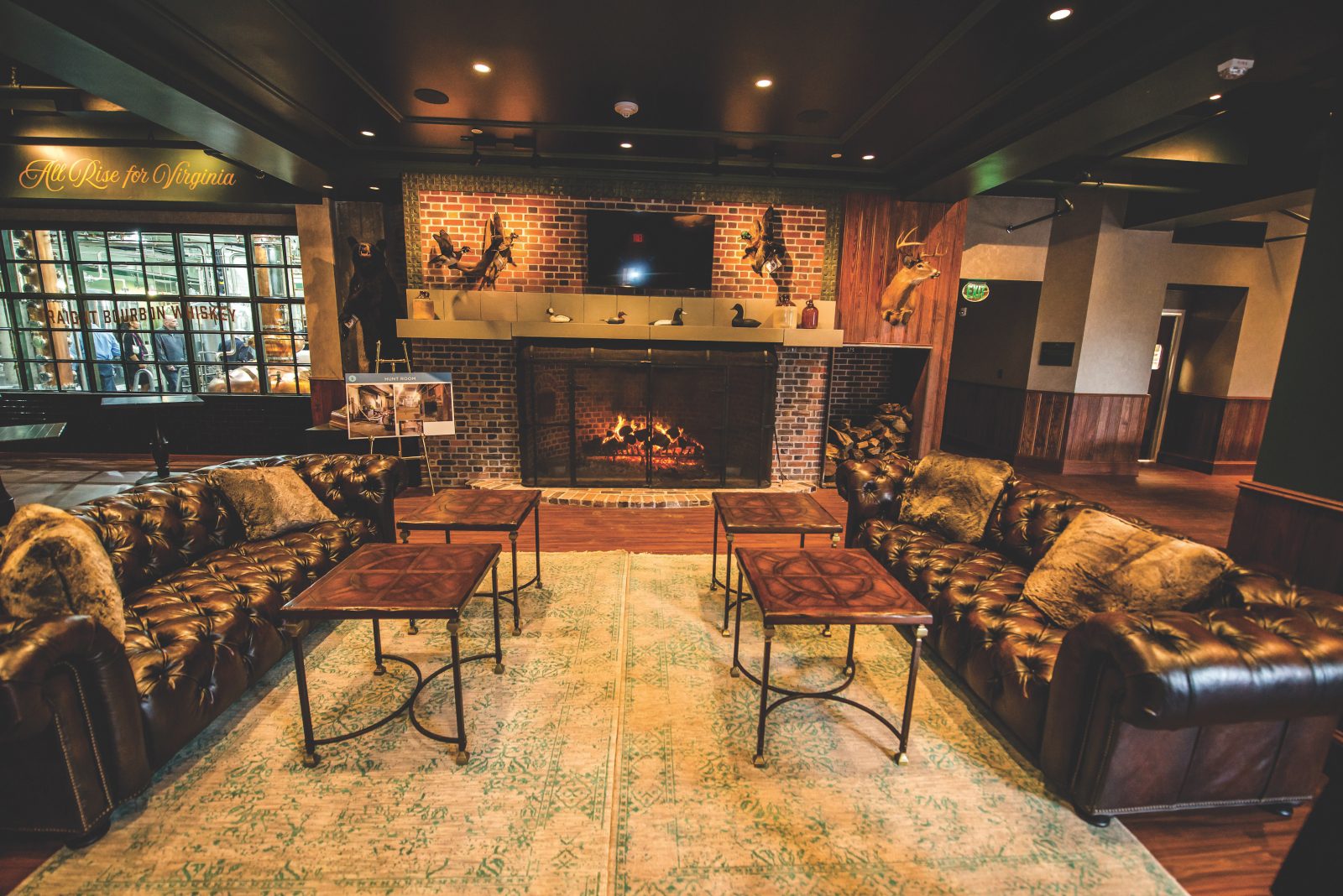 Owing its name to the alleged malfeasance from the Cavalier Hotel’s morally deplorable guests, Tarnished Truth lionizes the lore of the opulent hotel while enlivening Virginia’s heritage of distilling refined bourbon and other craft spirits. The first of its kind as a distillery integrated into a U.S. hotel, Tarnished Truth made its March debut coinciding with the Cavalier’s reopening after an $80 million renovation and restoration. It’s adjoined with the Hunt Room, a sophisticated social club and tavern filled with rumors of the scandalous transgressions of bygone visitors of ill repute—here the evasive Al Capone and inconspicuous Richard Nixon checked-in for a stay and perhaps a drink or two.

When visiting for dinner and drinks, the Hunt Room rekindles the roaring ’20s, a reminder of when the Cavalier was built. Its location, in what’s referred to as the basement, is suitable for its status, suggesting that it could easily have been a speakeasy during Prohibition with dim lighting between its stained glass windows and incandescent brick fireplace. A lavish lounge ambience is created with hardwood flooring and upholstered couches huddling by the hearth, beckoning imbibers for a fireside cocktail.

The tavern is festooned with trophies of waterfowl, deer and a bear. Pastoral portraits recall Virginia gentlemen in plaid tweed attire and red riding jackets on the hunt, only ready to dismount from their saddles and rest down their rifles when they’re ready for an evening of sipping bourbon. Though with its accessibility to the Atlantic, Princess Anne Country Club and Cavalier Golf & Yacht Club, golfers and beachgoers also frequent this traditional hunter’s enclave for drinks, dinner and live entertainment.

“All Rise for Virginia” is inscribed over steel-framed windows, where Tarnished Truth’s copper vodka tower and 500-gallon still designed by Vendome Copper & Brass Works are visible. The craft distillery was founded by home distiller Andrew Yancey and Back Bay Brewing owner Josh Canada, who conceptualized the project over a glass of bourbon more than five years ago before receiving a capital investment of $800,000 for equipment.

The only caveat to the Cavalier distillery’s sudden emergence on the craft spirits scene is that their bourbon products have to first age in barrels in a warehouse on Birdneck Road in Virginia Beach. Meanwhile, their bourbon is being developed in collaboration with MGP of Indiana and led by the experience of Seagram’s Master Distiller Larry Ebersold. 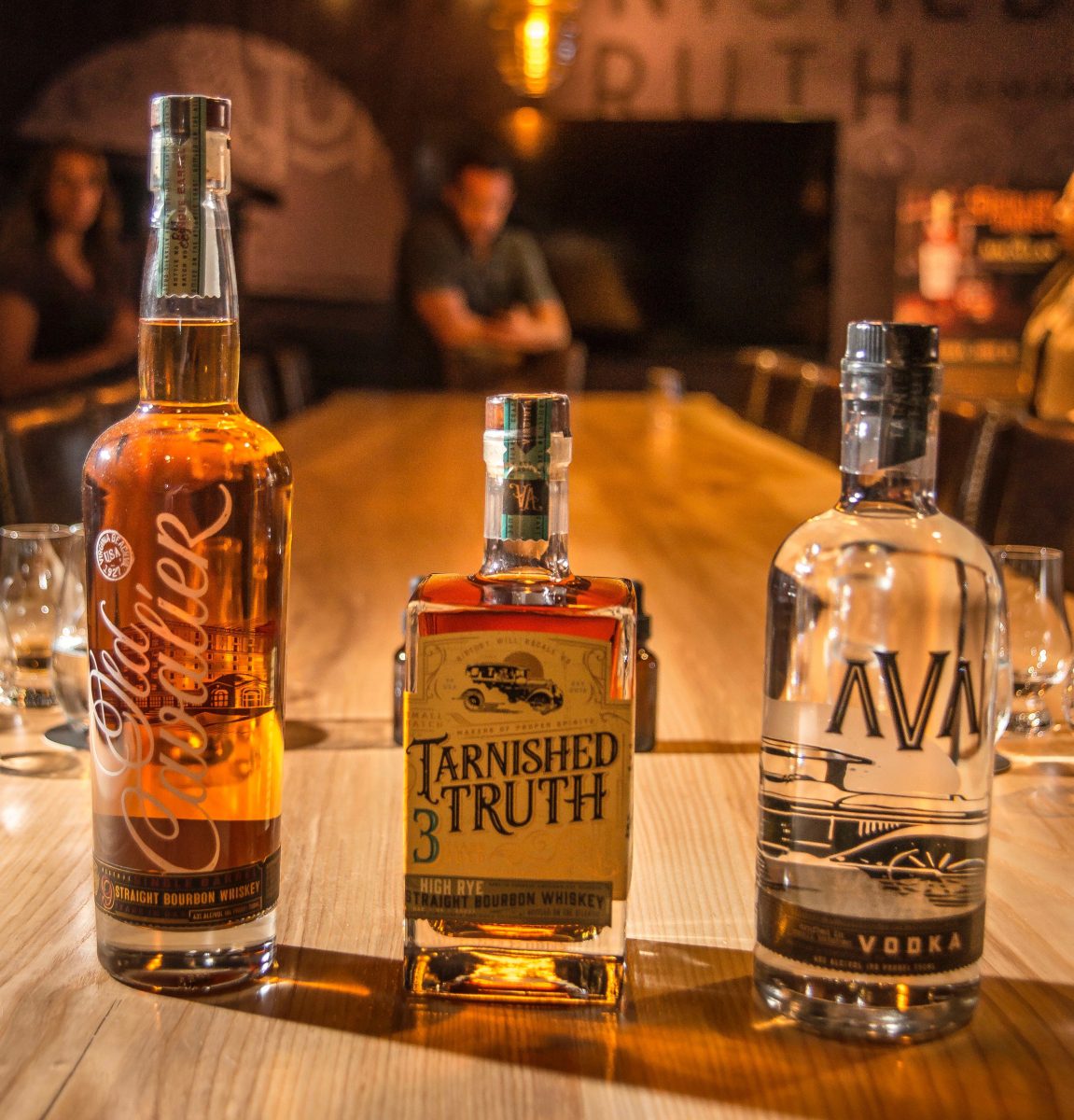 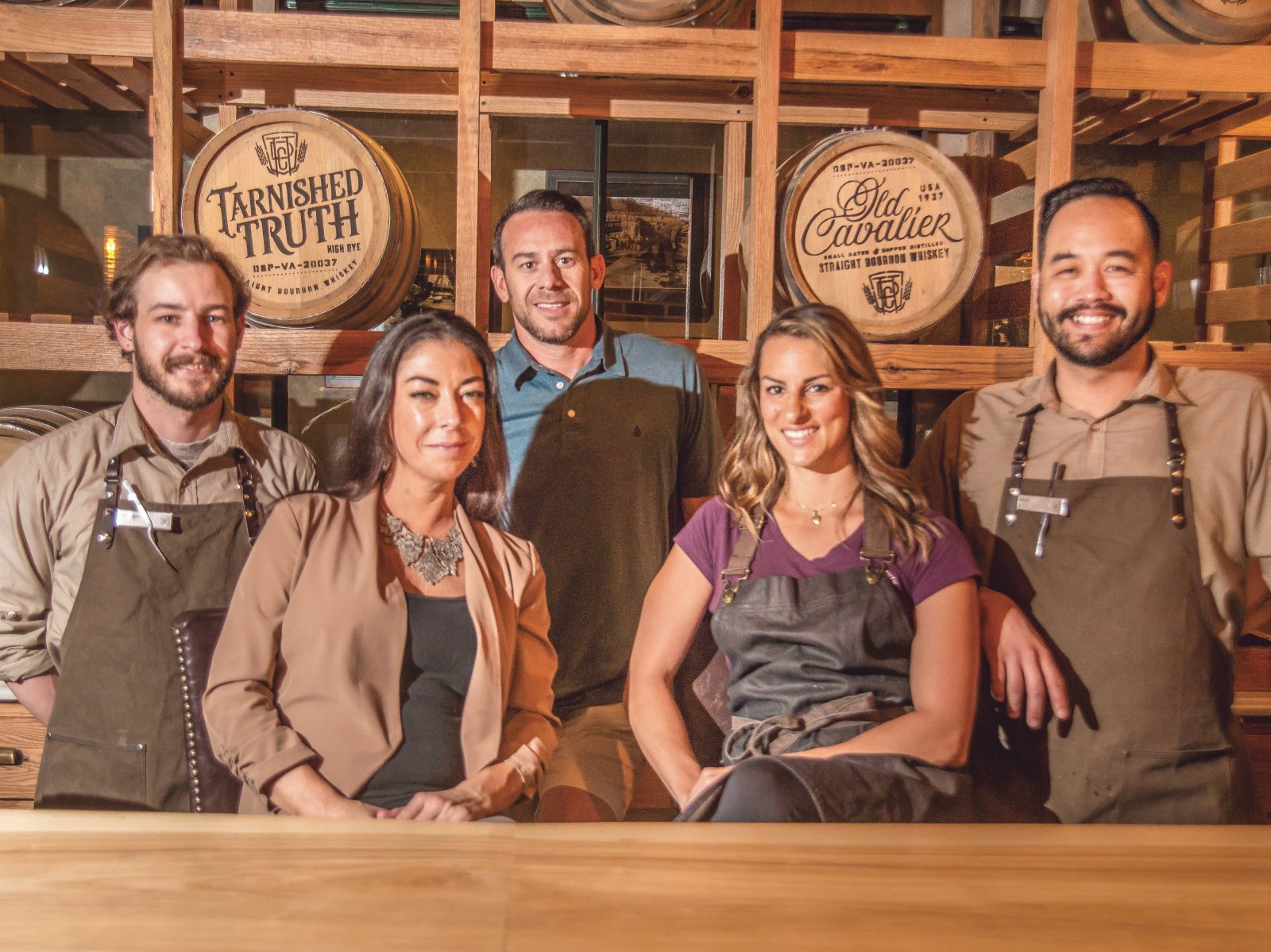 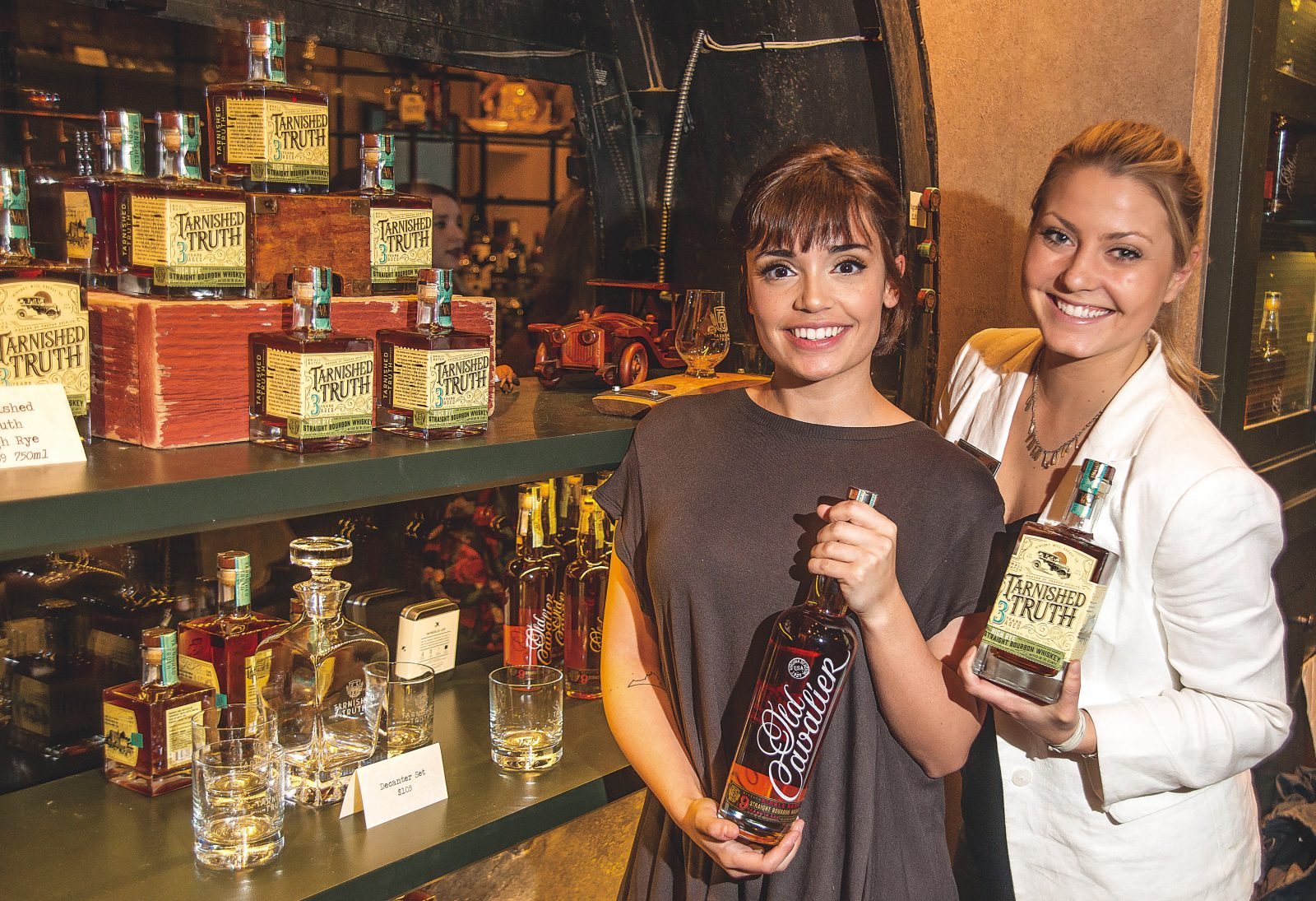 Currently they’re producing a blended bourbon, High Rye bourbon, Old Cavalier bourbon, AVA vodka and a forthcoming gin expected later in the summer. They source their grain from Renwood Farms of Charles City and are bottling and labeling by hand, as each are available in their adjacent retail shop, on tasting tours and mixed into the Hunt Room’s cocktails. 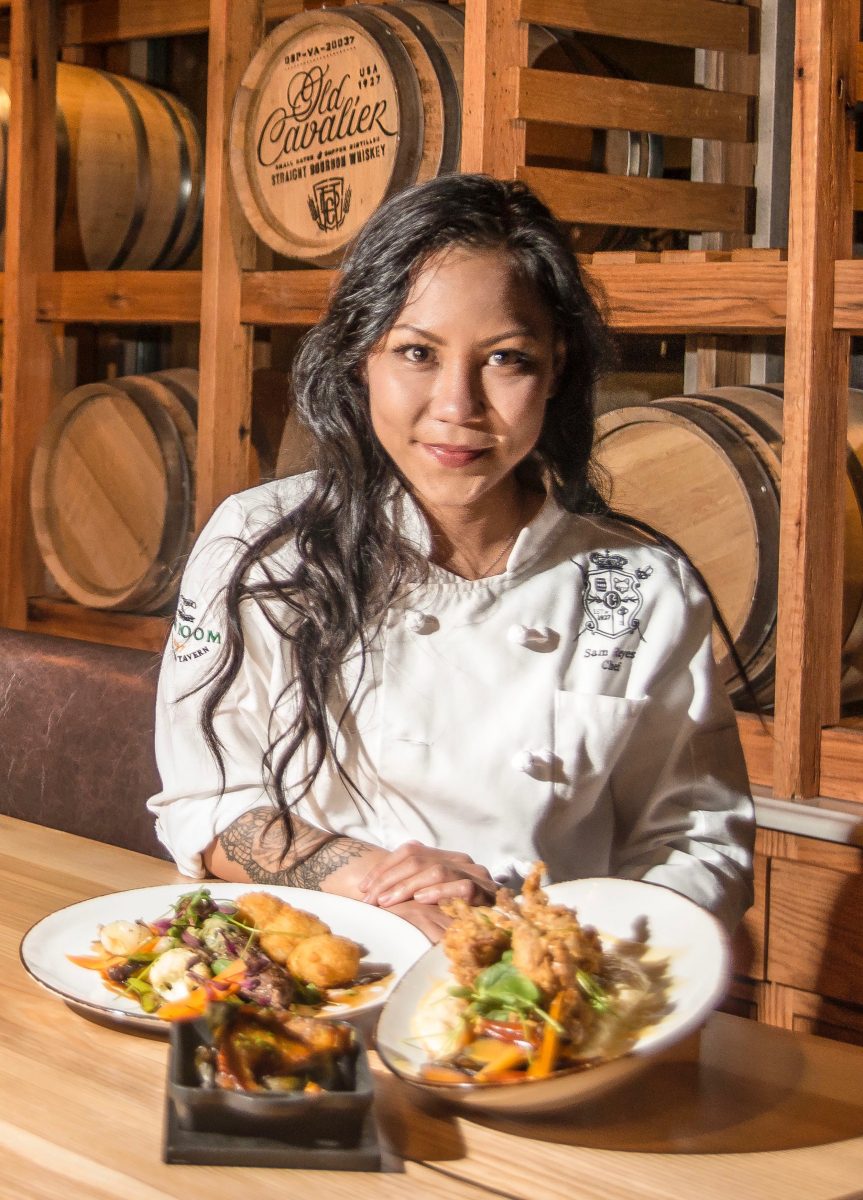 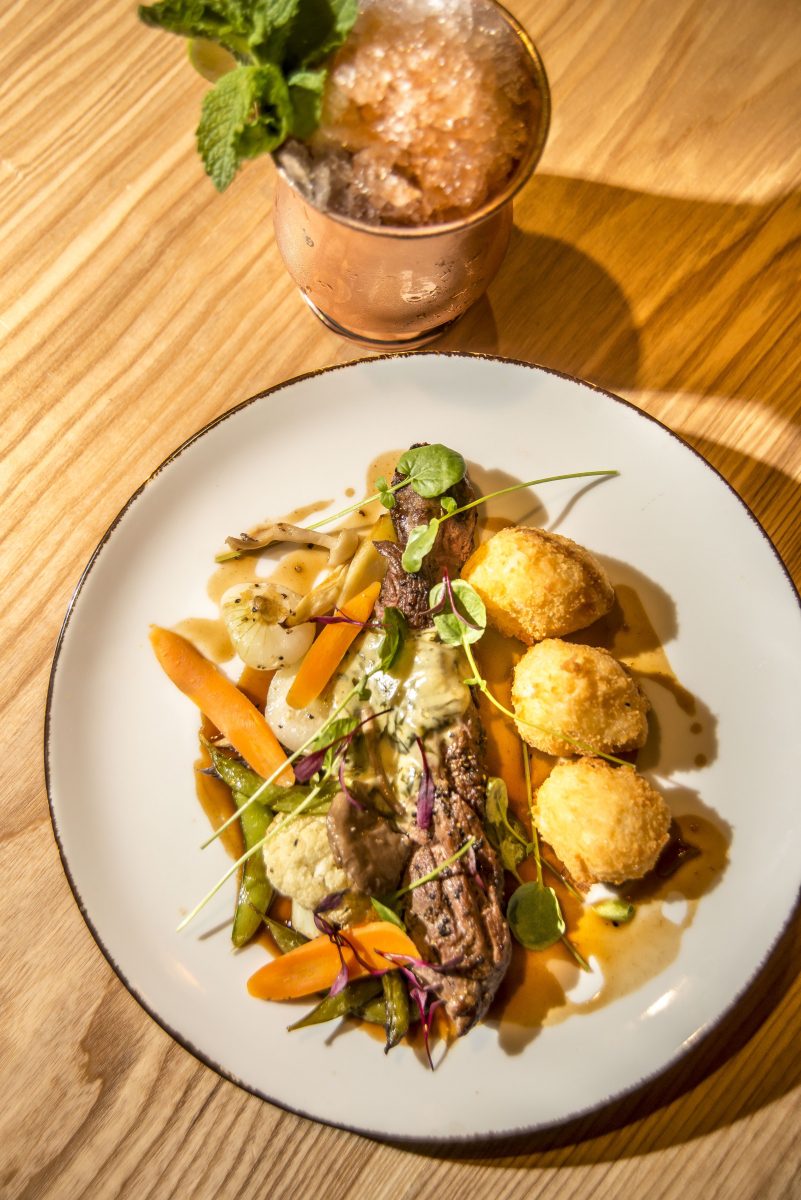 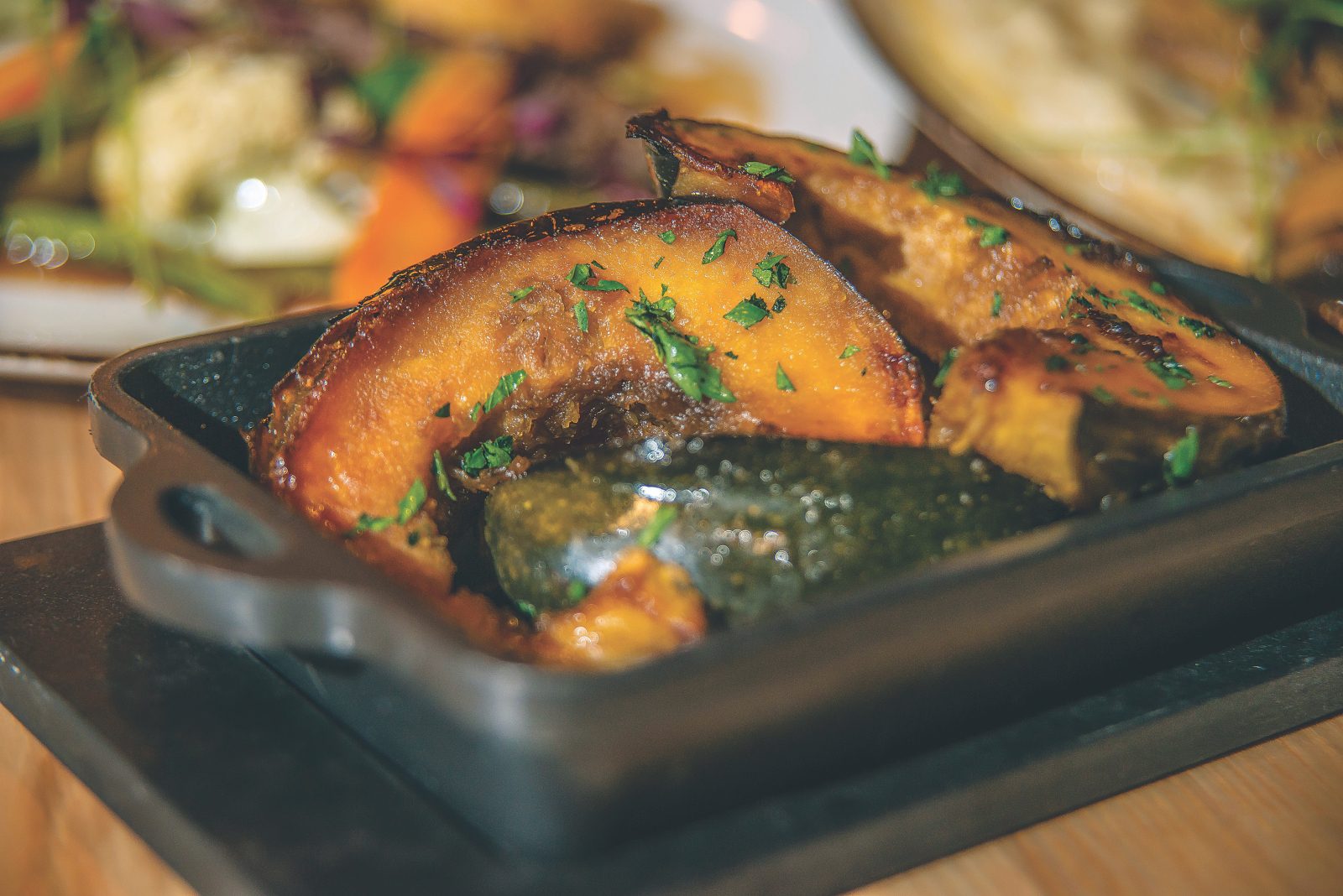 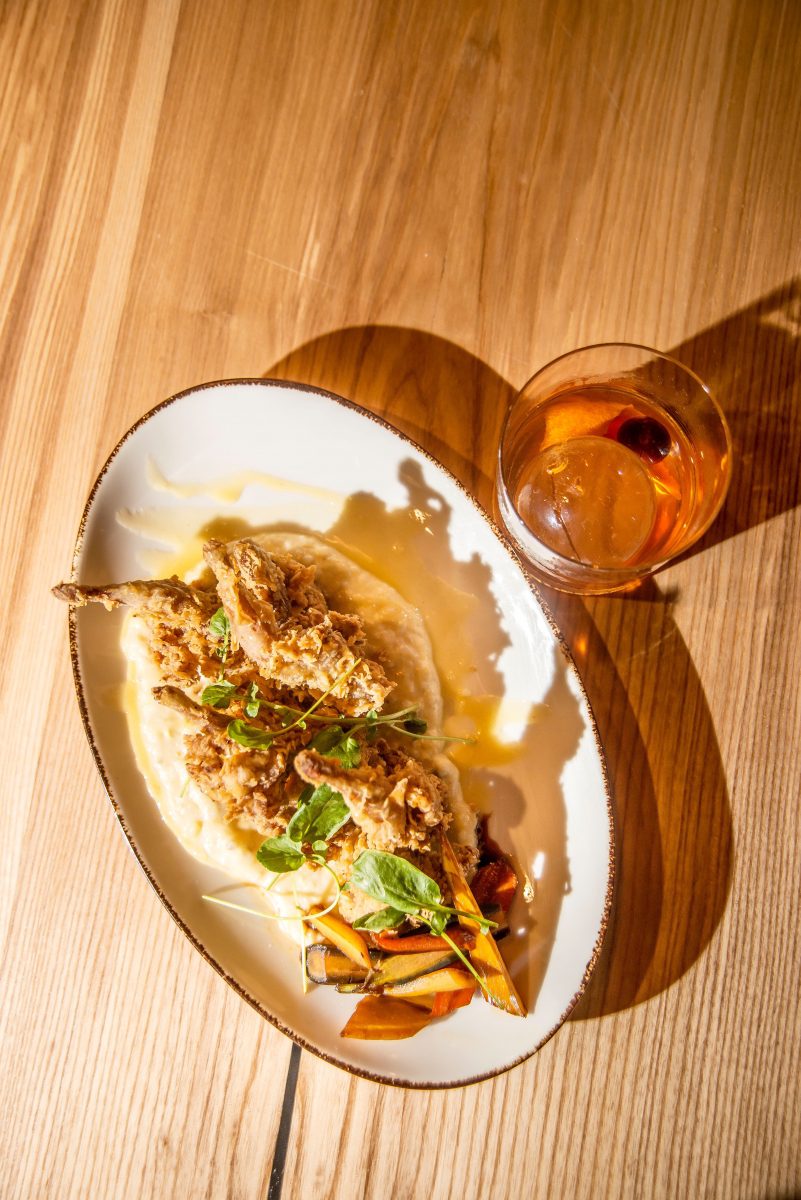 The Hunt Room focuses on Old World and Southern cuisine, where small plates aptly pair with aperitifs and cocktails complement main dishes comprised of fresh catches of Atlantic salmon, cornmeal crusted rockfish fillet, fantail fried shrimp and gamey meats like quail and duck. Executive Chef Sam Reyes treated us to their crispy Country Fried Eastern Shore Quail, which came served on top of a platter of whipped grits from Wade’s Mill in Raphine, sorghum glazed carrots and burnt honey mustard; a tender pan-seared wild boar special with a roasted medley of vegetables; and a side of Maple Roasted Winter Squash, scented with star anise and cinnamon.

Accompanying the fried quail, the AVA Mule was a signature summertime drink with spicy ginger beer and lime juice in crushed ice with a smidgen of mint on the brim of a copper mug, en vogue with the distillery’s decorative surroundings. The wild boar went well with their Old Fashioned with Tarnished Truth bourbon, a hickory and cherry wood smoked libation with rich simple syrup, Angostura Orange and Peychaud’s Bitters, garnished with a zest of orange flamed from a torch and a dash of drunken cherry over an iced whiskey ball.

The Hunt Room lays claim to attaining mixology’s top talent around, bar none, namely with James Ah You and Beth Evans, formerly of Terrapin and Ultra Craft Cocktails, respectively. They accessorize their spirited creations with provisions of fresh juices and bitters, bourbon and vodka sourced in-house and even a smoker box billowing out a cloud over their cocktails.

We can attest to the quality and impassioned creativity found at Tarnished Truth and the Hunt Room through their spirits, cocktails and fare. Mixers, shakers, distillers and chefs have a flair for reimagining recipes evoking the hotel’s prestigious past, while ushering in a new era of their own.

Tarnished Truth and the Hunt Room are located at the Cavalier Hotel at 4200 Atlantic Ave., Virginia Beach. Visit TarnishedTruth.com and CavalierHotel.com/Dining for further information.