The Legacy of Virginia’s Maritime Music

Virginia is music’s home, in the mountains, yes, but also along the Atlantic Ocean, Chesapeake Bay and river banks.

There are other musical hotbeds: Nashville and Asheville, Austin, Muscle Shoals, Memphis and more. And, in Virginia nestles the heart of American song in the Blue Ridge Mountains, known widely through the famed 1930s Bristol recordings and the music of A.P. Carter, his African American collaborator, Lesley Riddle and the Carter Family. The music is often derived from Scotch and English ancestors as well as African slaves. Thus, the famed “Crooked Road” of Virginia’s mountain music has become a destination for tourists the world over.

But, there is also a “road” or trail to the music of Virginia’s coastal waterways similar to the “Crooked Road.” Only thing is, that watery trail hasn’t been widely recognized yet, laments Norfolk maritime troubadour Bob Zentz, an icon of folk, sea shanties and coastal music. 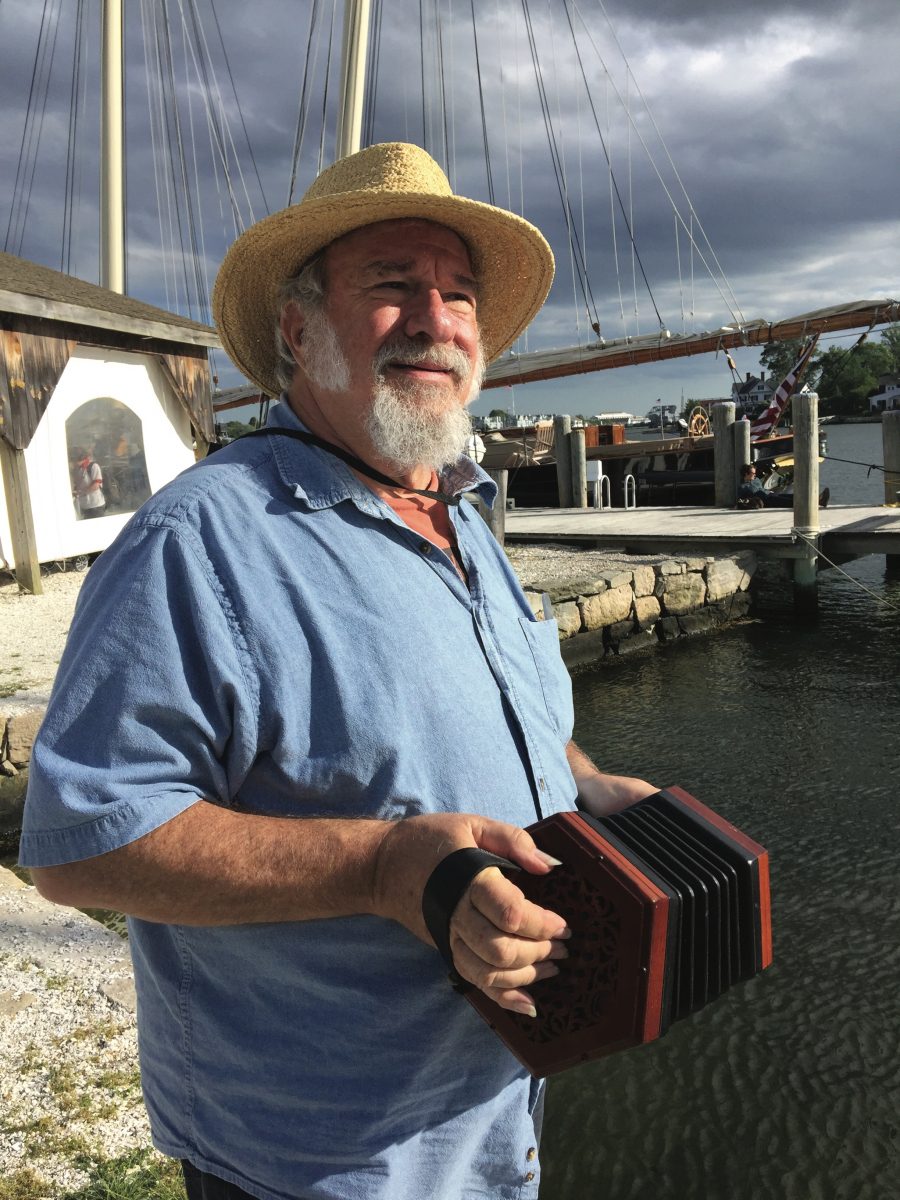 Zentz has spent most of his life trying to change that. “The folk who love to listen, play and perform Virginia’s ‘water music,’” he says, “are purveyors of a planet-wide musical movement. Learning from tradition, we discover who and where we are, creating a sound that is historical, musical, forward-looking, yet true to its roots and branches. The shanties—which are the work songs of the sea—as well as the maritime ballads and dance tunes and their pop and country derivatives, plot a course on a voyage from yesterday to tomorrow with occasional stops ashore, on the islands of time that we call home.”

For now, Zentz and fellow Virginian sea-going singer-songwriter Mike Aiken have carved out their own niche within this watery mantra—a world stretching back from the shanties of seamen and glorious work songs of African American Menhaden fishermen on to the rocking seaside concerts of Norfolk’s Harborfest. 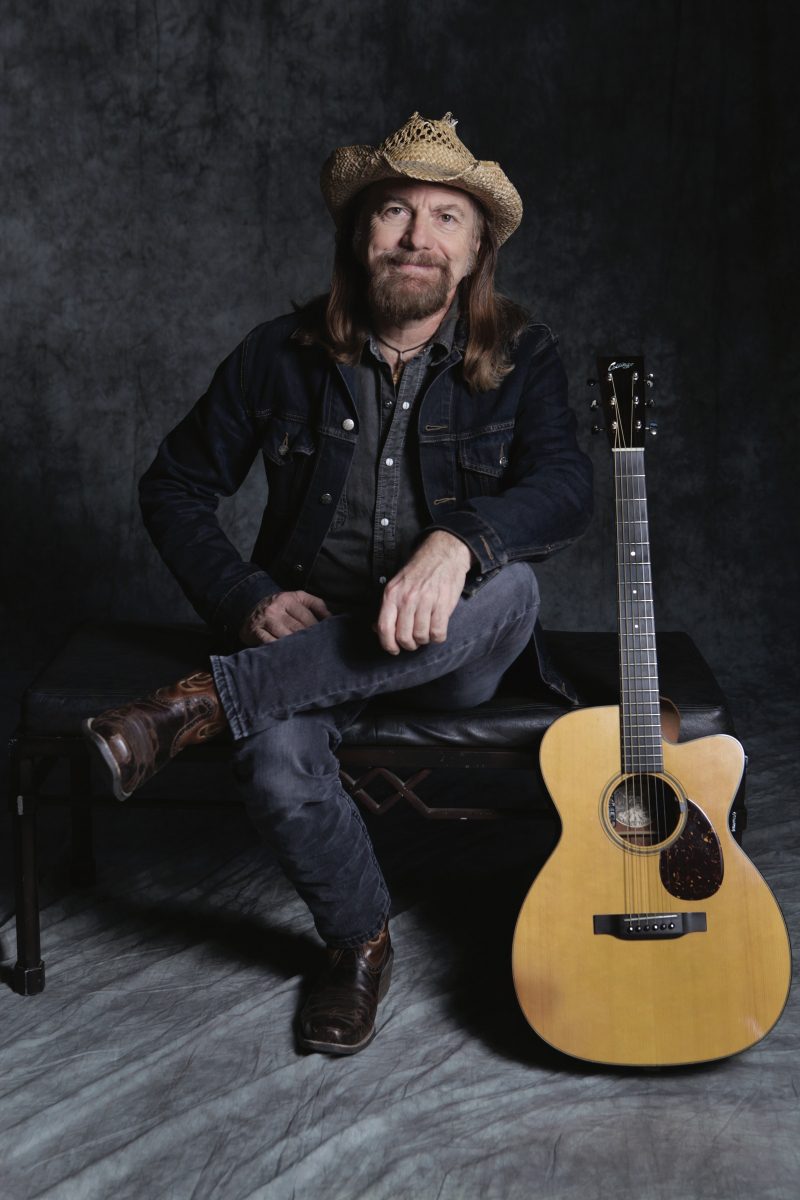 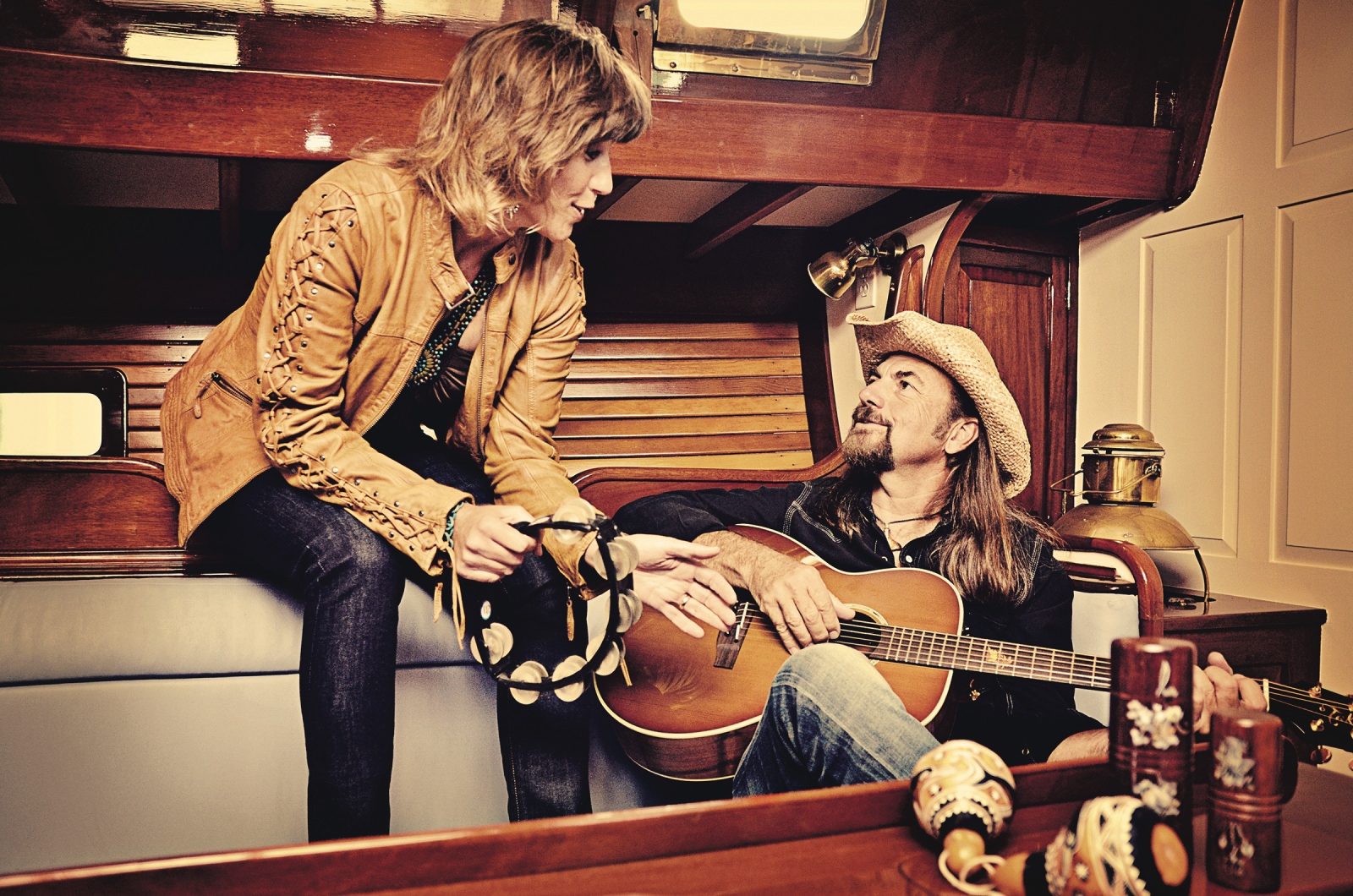 As partners in music and in marriage, the Aikens harmonize with Amy performing
vocals and percussion and Mike on vocals, guitars and mandolin. Photo by Tricia
Duncan. 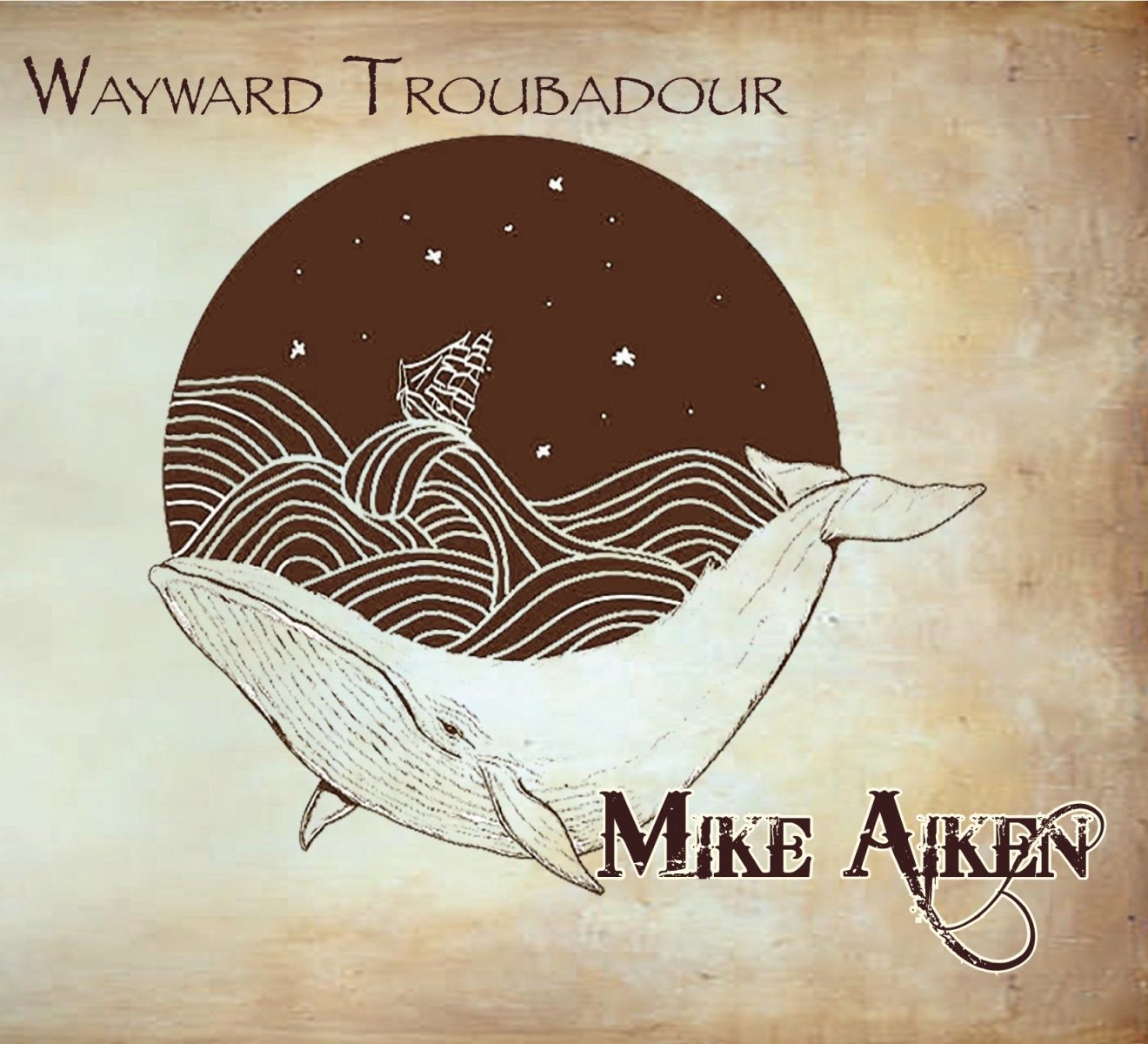 A Grammy nominee, Aiken’s many songs about the boating life include one about sailing on the Chesapeake Bay selected by Sports Illustrated as one of the top 40 sport songs ever written. He has been a licensed U.S. Coast Guard captain. He and his wife and musical partner, Amy, have sailed extensively on the bay, coastal waterways and the Atlantic Ocean, departing from their berth at Rebel Marina in Norfolk’s Ocean View. They once got as far as the waters surrounding Cuba, where Mike, influenced by Hemingway, longed to go, but were stopped by authorities. The Aikens have sailed tens of thousands of offshore miles, making stops along the Canadian Maritimes and U.S. coast and in the Caribbean and Europe.

Love of life on the water is evidenced in Aiken’s popular “Summertime Song”:

For over a decade the Aikens sponsored and performed in an annual music festival in Smithfield, in conjunction with Smithfield Little Theater called Aiken & Friends Fest, with a mission of youth music education and celebrating the songwriter. Starting in 2017 (and continuing in 2018), the event is now held in Branchburg, N.J. (Sept. 21–22).

The couple now divides their time between Norfolk and Nashville, where they recorded the newly released album, Wayward Troubador, his seventh studio album, featuring a stellar collection of Nashville talent. The record has a new Aiken nautical Virginia classic, “Chesapeake,” as well as the lovely land-based tune, “Nashville Skyline.” 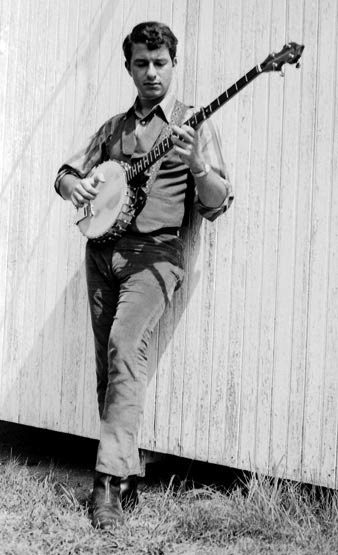 Bob Zentz has been performing for more than 50 years. Besides guitar, he plays the autoharp, lute, melodeon, mouth harp, banjo, concertina and mandolin. He specializes in historical and maritime music and has a repertoire of more than 2,000 songs.

A longtime resident of Norfolk, having grown up near the Lafayette River, he has led programs along the Intracoastal Waterway for the nonprofit adventure learning and travel organization, Road Scholar (formerly Elderhostel). Beginning in 1966, Zentz served two years as a sonar technician in the U.S. Coast Guard. When he left the Coast Guard in 1969, he was hired as a songwriter for “The Smothers Brothers Show,” then returned to Norfolk where he created Ramblin' Conrad’s Guitar Shop & Folklore, during which time Johnny Cash praised his songs highly.

Zentz notes that there are numerous programs and series held at museums, shops, cafes, historical sites and other locations along the Virginia Coast and the nearby Outer Banks keeping coastal musical traditions alive, including the TMLHA (Tidewater Maritime Living History Association) and its Military Through the Ages reenactors events, for which he has performed several times.

The Cape Charles Historical Society has recorded oral histories including “The Way We Were,” with Cape Charles native Lloyd Kellam sharing memories of music on steam ferries and of Eastern Shore folk musician Sud Bell:

“I can remember getting on the steamer and getting off right in Downtown Norfolk,” Kellam remembers. “Saturday nights where you could get on, have dinner, and a band would play, and you’d go over and back and over and back and get off.

“There used to be a couple of brothers from Quinby [a tiny fishing village]. They were called Len and Sud Bell … They’d play the banjo, and they never finished a song. They would start out, and the next thing you know, they’d be doing [playing] it [their instrument] over their back and under their legs and all that sort of stuff. They’d toss one banjo to the other one and keep on going … They’d drop a hat out on the street, and people would give them money between ferries. Talking to one of their daughters, she said they made a living in the summer time going across on the ferries on Friday nights, just playing all night long and leaving a hat out to make a living. When I moved to Exmore, I remember them one time coming in my store with banjos and entertaining people, yes. Len and Sud Bell.”

Eastern Shore, Virginia, long time ago/
Out on Hog Island lived a man you should-a known/
Always wore suspenders, hip boots as well/
A voice like a barn door had Ol’ Sud Bell!/
Ol’ Sud Bell, Ol’ Sud Bell/
Sittin’ on the porch of the Wachapreague Hotel/
Pickin’ on the banjo, he played it rather well/
Gone but not forgotten, is Ol’ Sud Bell!

The Bells lived in Wachapreague when prohibition came/
A still in the attic was their claim to fame/
And down in the kitchen, two faucets in a line/
The cold ran cold and the hot ran ’shine/
At the Red Onion, in Broadwater town/
Sud played the banjo while the people danced around

Charlie Doughty bowed the fiddle for the square dance tunes  …” 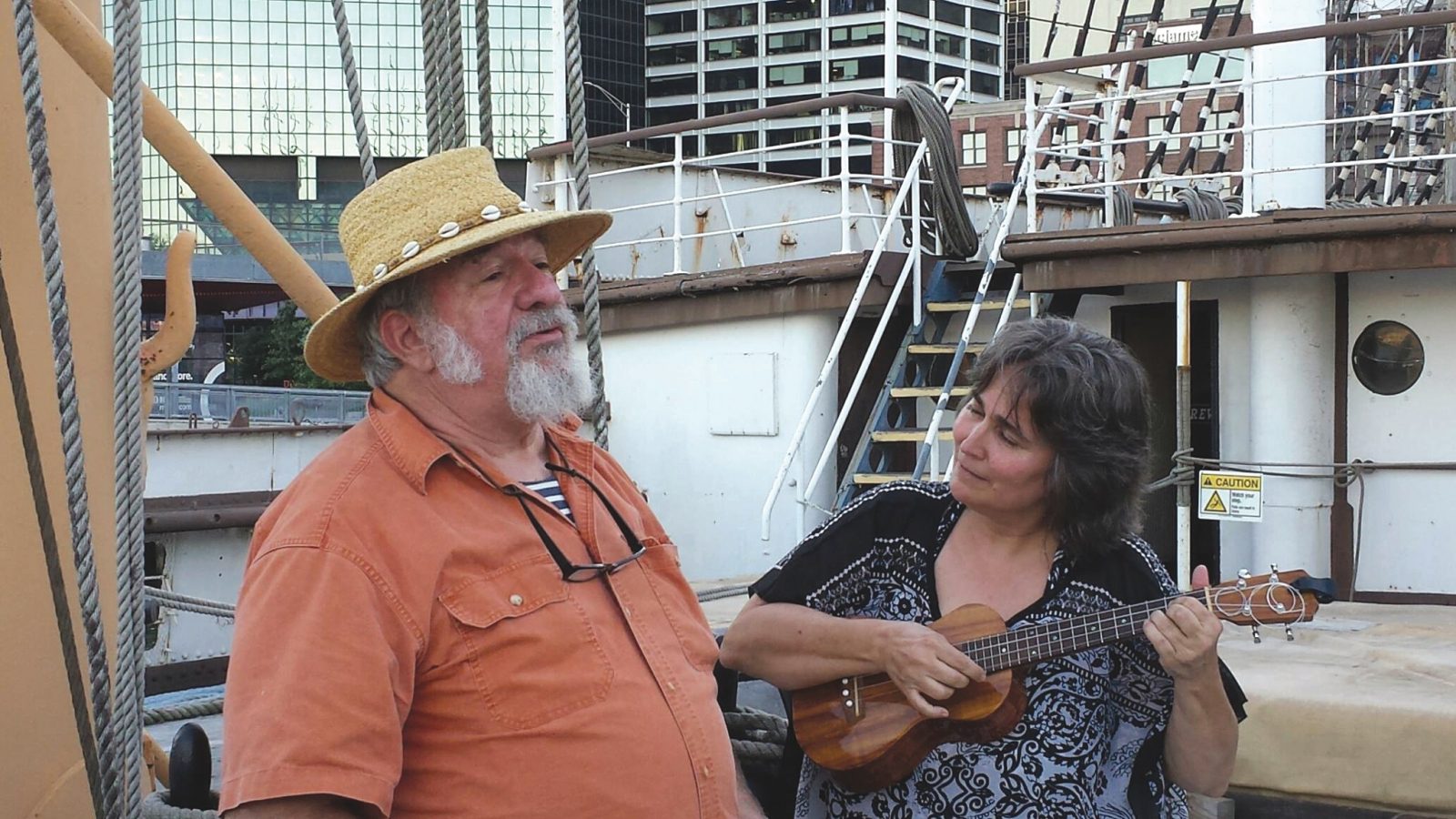 Above right: Bob Zentz on Long Island, N.Y. in summer 1966. Photo by the late
Steve Curcuru. Pictured here: Bob and Jeanne McDougall Zentz, Aug. 2016 on the
deck of Peking, a four-masted ship that was departing for Hamburg, Germany.
Photo by Chris Koldewey.

Along with paying homage to the history of our region’s tunes, Zentz does his part in continuing the tradition for current and future maritime music lovers by performing nautical music locally, including being a founder of several important folk music series.

“As a hub, home and harbor of maritime activity, the Hampton Roads area is a veritable sea chest full of venues and events,” Zentz says, “where on-deck and arm-chair mariners enjoy, experience and appreciate the music, yarns and legacy of our oceans, bays and rivers … from dockside pubs and concerts to museums, aquariums, libraries and festivals.”

The NorFOLK Festival, founded by Brackish Water Jamboree and held at O’Connor Brewing Company in Norfolk, will be in its third year, providing maritime musical performances such as those of Zentz and his wife and musical partner, Jeanne McDougall Zentz, along with Shanty Grass, who specialize in sea shanties and traditional seafaring music.

“Our seas, bays and rivers weave a spell about our very lives, and to understand the ‘ways of the water,’ it is essential to understand the lives and times of those who have tried to tame, explore, navigate and harvest them,” Zentz says about our fascination with the songs of our coastal areas. “Virginia’s musical trail spans the mountains to the sea and back again in a never-ending story of song.”