Many lifelong Coastal Virginia residents have memories of visiting one of the region’s many history museums, if not recently, then perhaps on the obligatory grade school field trip. But if the caricatured version of the history museum was ever accurate—fusty corridors jammed with obscure artifacts, wordy signs and poorly-fitted mannequins—that’s no longer the case.

Exhibit A: The American Revolution Museum at Yorktown.

In March, officials with the Jamestown-Yorktown Foundation, the state agency that operates the American Revolution Museum at Yorktown, hosted the grand opening for the new museum. The 13-day ceremony, which included festivities such as flag-raising observances and artillery demonstrations, marked the culmination of 10 years of planning and work.

Construction crews recently completed a $50 million overhaul of the 22-acre site, demolishing the museum built in 1976 and putting a new 80,000-square-foot building in its place. The museum now has more gallery and classroom space. The outdoor, living history portion of the museum has been reconfigured and expanded.

For all that money and effort, the commonwealth now has a museum that can speak to modern visitors in novel ways by bridging the gap between the 18th and 21st centuries.

Peter Armstrong, senior director of museum operations and education, says that integrating 21st century technology in the design was not only a new way to connect visitors to the past, but it was an element that school-aged learners now expect.

He has seen young folks approach static signboards only to press or swipe them, since those actions allow them to navigate around so many other displays in their lives. He says that people can debate the merits of children being too connected, but technology nevertheless remains “another method of communication that allows for new conversations.” 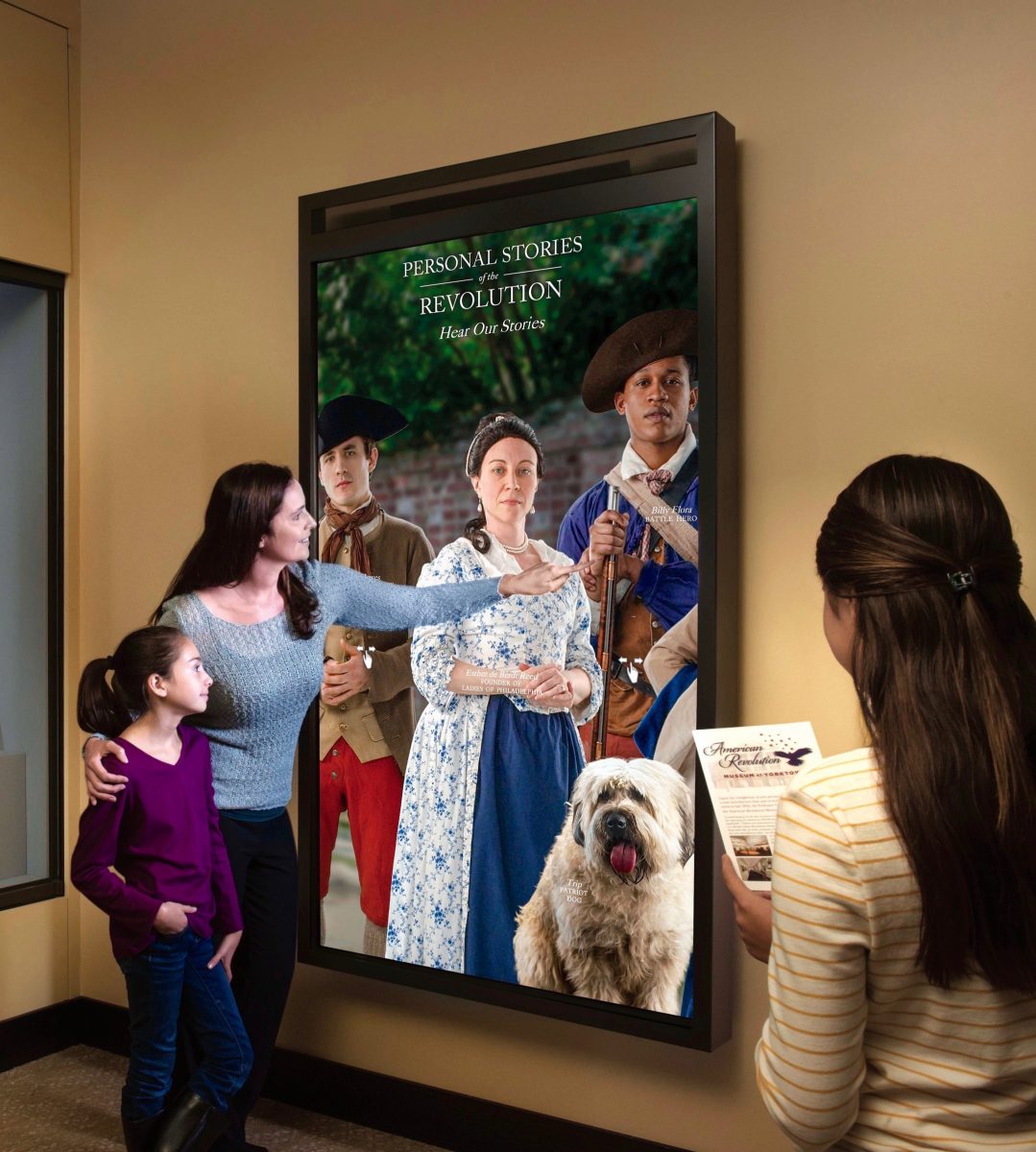 Several types of interactive displays included in the museum teach about early Americans. A life-sized touchscreen offers biographies of everyday people who happened to find themselves caught up in the dramatic events that unfolded in the late 18th century. The display is familiar to anyone who has used a smartphone; zoom in and zoom out features are available by spreading or pinching one’s hands, for instance.

At another station, a tabletop touchscreen game shows the movements of armies at several notable battles during the Revolutionary War. Visitors have the chance to become a field commander with a bird’s eye view of the action, maneuvering troops against opponents to see if they can outfox them.

That’s not to say the museum is strictly gadgetry. The new gallery space retains displays that have been mainstays of museum exhibits for ages. Original artifacts that illuminate life around the time of the American Revolution are accompanied by thorough descriptions of their provenance and significance. Timelines chronicle the epic events of the war in great detail. And yes, mannequins have been meticulously staged in vivid displays to reflect snapshots of telling moments during the war.

Armstrong says that those who wish to engage with this sort of deep knowledge about American history have the chance to do that in the new museum. But for people whose interest may be fleeting, the innovative ways that the museum presents this information breaks new ground in historical interpretation. And the touchscreens are only the start of it.

Planners have developed an app that allows users to explore people of the American Revolution and the places at the museum in as much detail as they choose. Hologram-like projections on clear screens show soldiers moving and talking in full battle dress.

At one station inside the permanent exhibition galleries, visitors step into a canvas tent and back into the American Revolution, as creative staging on the walls projects sounds and shadows one might have encountered in a similar dimly-lit tent more than two centuries ago. A video onscreen replays a scene that might have transpired underneath that shelter. 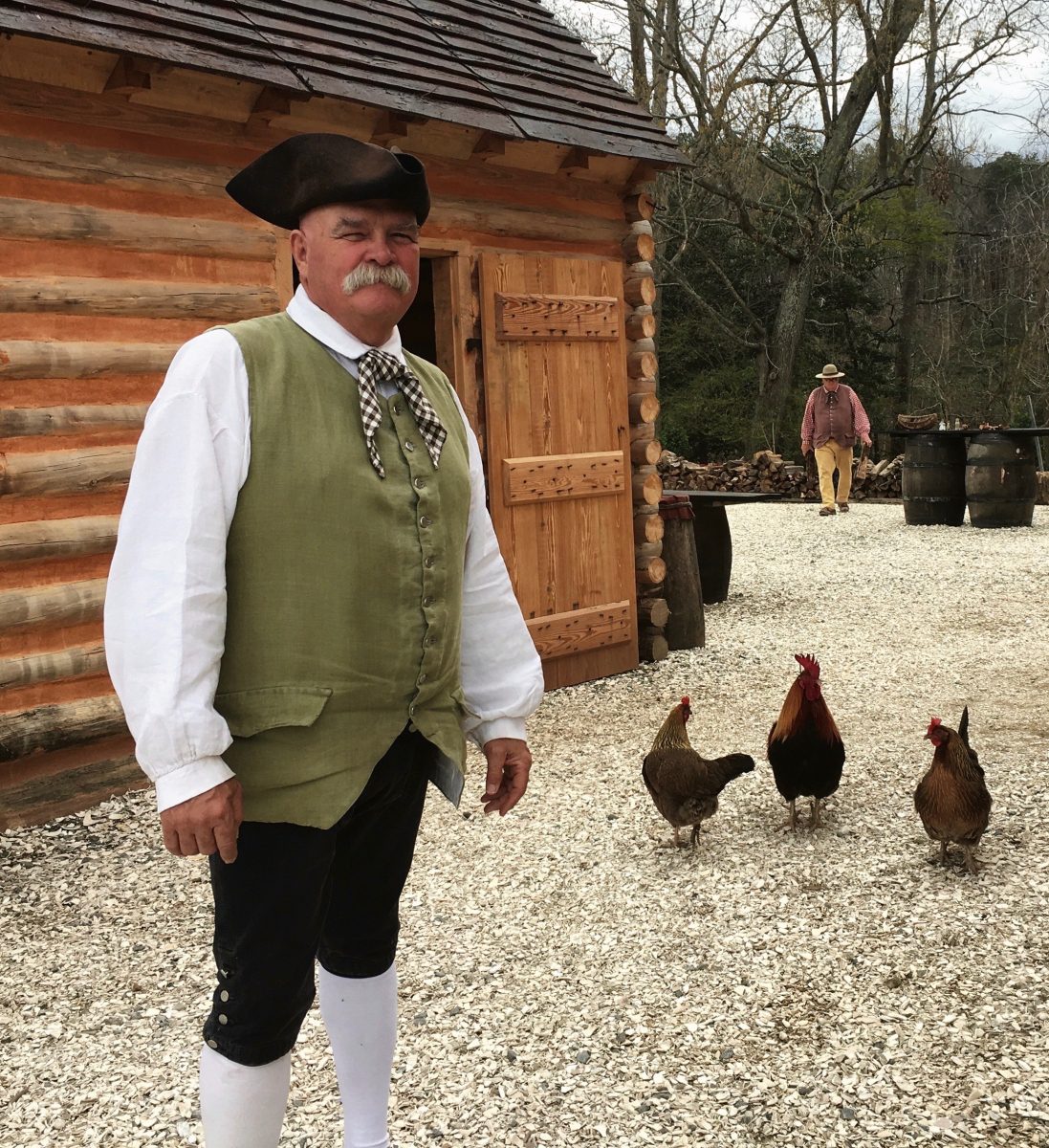 Armstrong says that placing guests in the moment not only offers a unique peek of life during the war, but it’s more informative, too. “We could have put a movie like this in a traditional setting, but here you get a better sense for what went on,” he says.

In fact, the heart of the new museum is a so-called experiential immersive theater, and it’s anything but a traditional setting. On a 180-degree screen, up to 70 people watch as “The Siege of Yorktown” unfolds around them in vivid detail. Seats vibrate when thunder crashes and cannons boom. Wind and smoke flow through the theater, as do the distinct scents of gunpowder, seawater and coffee.

In other areas, laymen might not notice areas where the American Revolution Museum at Yorktown is tech-heavy, but industry professionals will. Motion sensors trigger videos and illumination within exhibit space, not only saving some on the electric bill but helping to preserve artifacts by limiting their exposure to light. 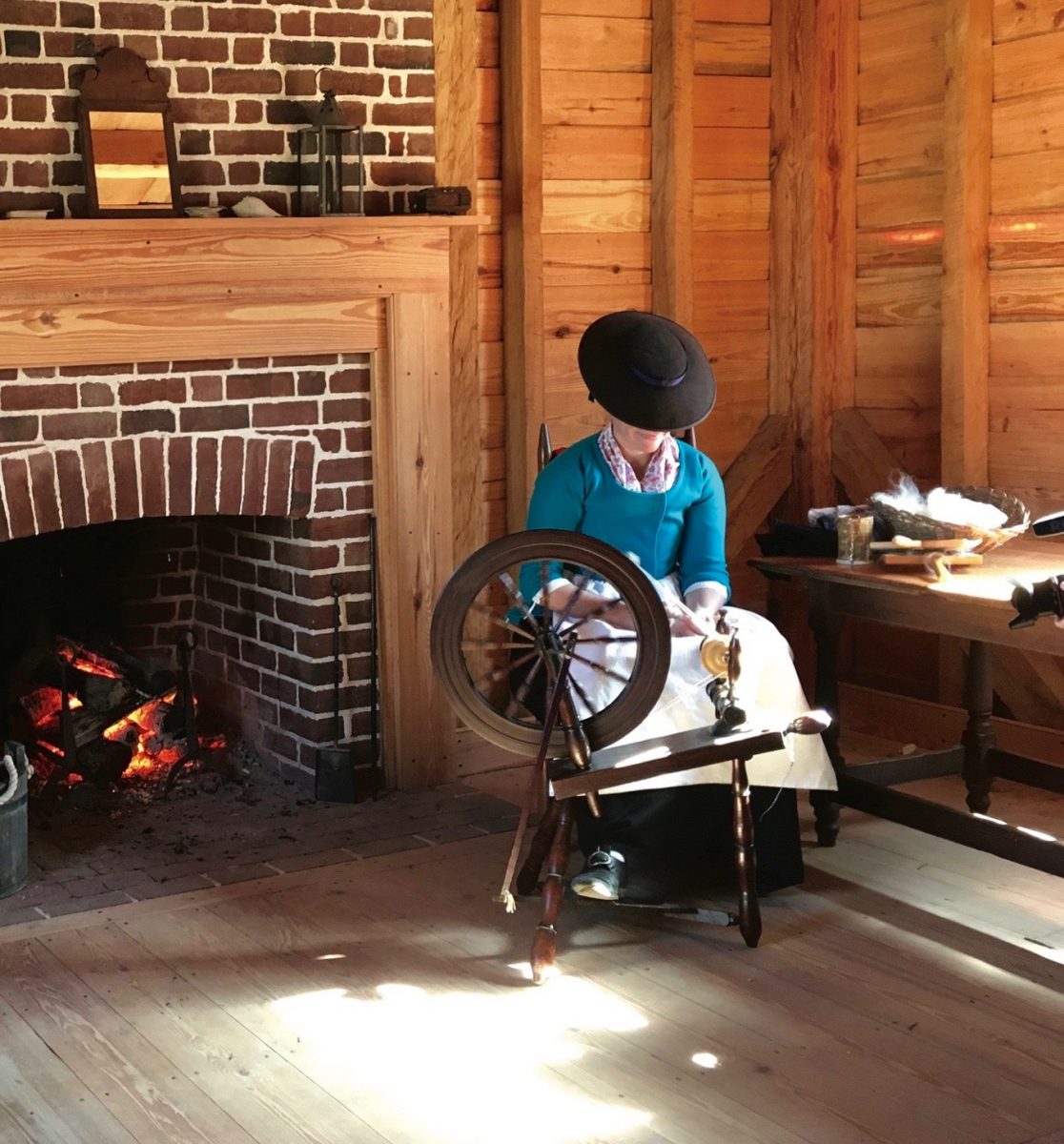 But if the furnishings of the American Revolution Museum at Yorktown spin history on its head, the content it delivers is also a far cry from traditional interpretation.

To appeal to all the visitors they expect to come, curators have incorporated the perspectives of a wide swath of American history-makers, according to Armstrong. “We deliberately steered away strictly from stories that had George Washington at center stage because other museums already do that, and they do it well,” he says.

Kate Gruber, curator of the American Revolution Museum at Yorktown, says that the goal of the museum is to allow visitors to “connect on a personal level with the people of the past.” That’s more easily accomplished when the subjects are not necessarily icons of American history who have populated prominent narratives.

Many exhibits offer profiles of lesser known figures who contributed to the American tapestry, despite their lack of renown, such as Peter Harris, a Catawba Indian who fought on the side of the Patriots, and Nicholas Veeder, a New Yorker and American Revolution veteran who turned an old tumbledown stone fort into a museum full of relics he had collected and gave tours of the makeshift gallery until he died at age 100 in 1862.

But of all the diverse and colorful characters the new museum brings to life, it also engages the public by raising challenging points about the United States that are not easy to reconcile. “We don’t shy away from the tough questions,” says Gruber. “What does it mean to fight for liberty, to achieve independence, yet the country still permits slavery and women don’t have equal rights?”

Gruber says that there is no better place to have a museum that explores these facets of history than at Yorktown, where 8,000 soldiers under General Charles Cornwallis surrendered to the combined French and American forces under General George Washington in 1781. The defeat compelled the British to reconsider the effort against their American adversaries, and there were no major engagements for the remainder of the war. Two years later, the Treaty of Paris made American independence official.

“Yorktown was an end, but it was also a beginning,” says Gruber. “The United States is an ongoing experiment in democracy.” 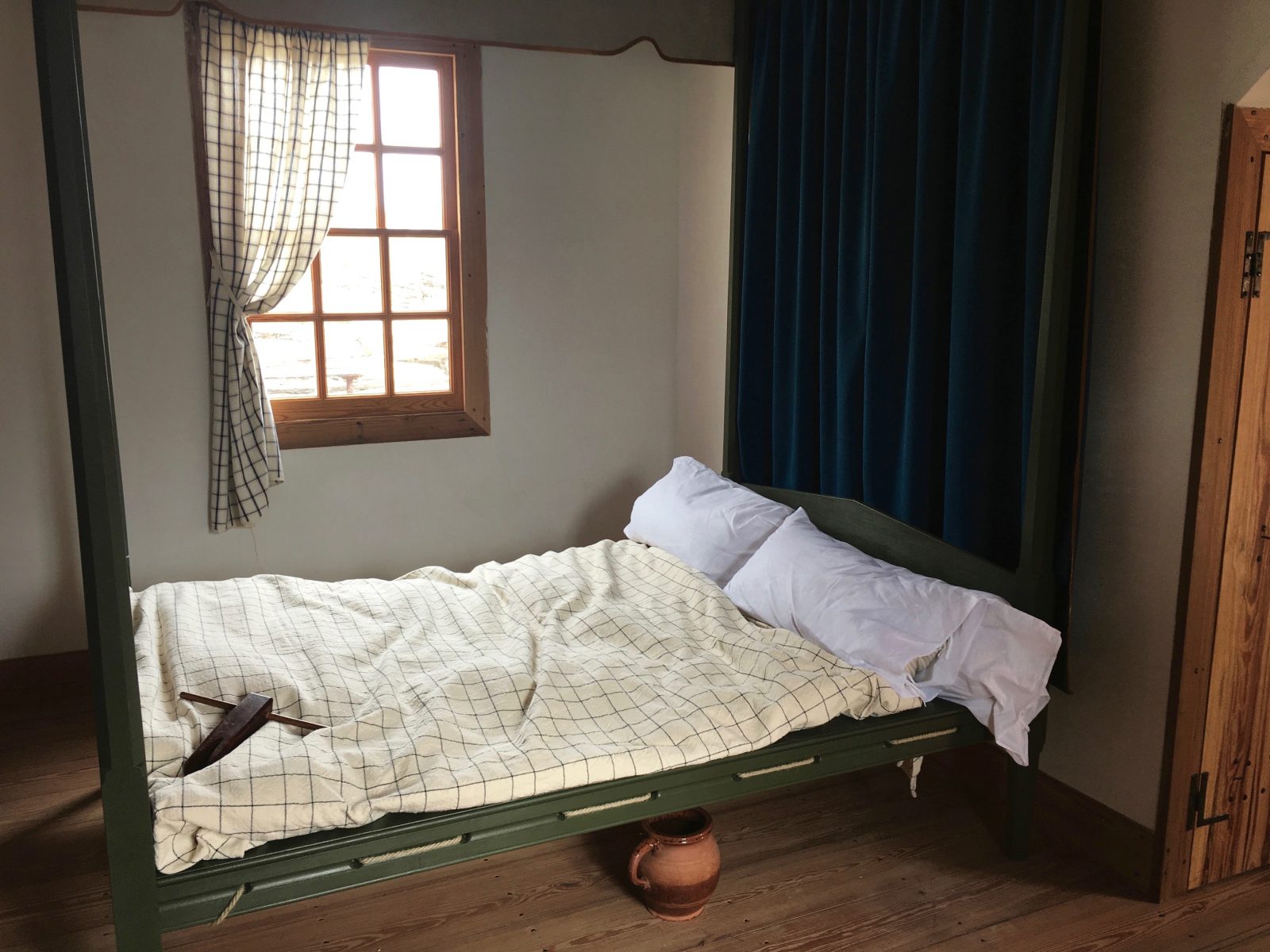 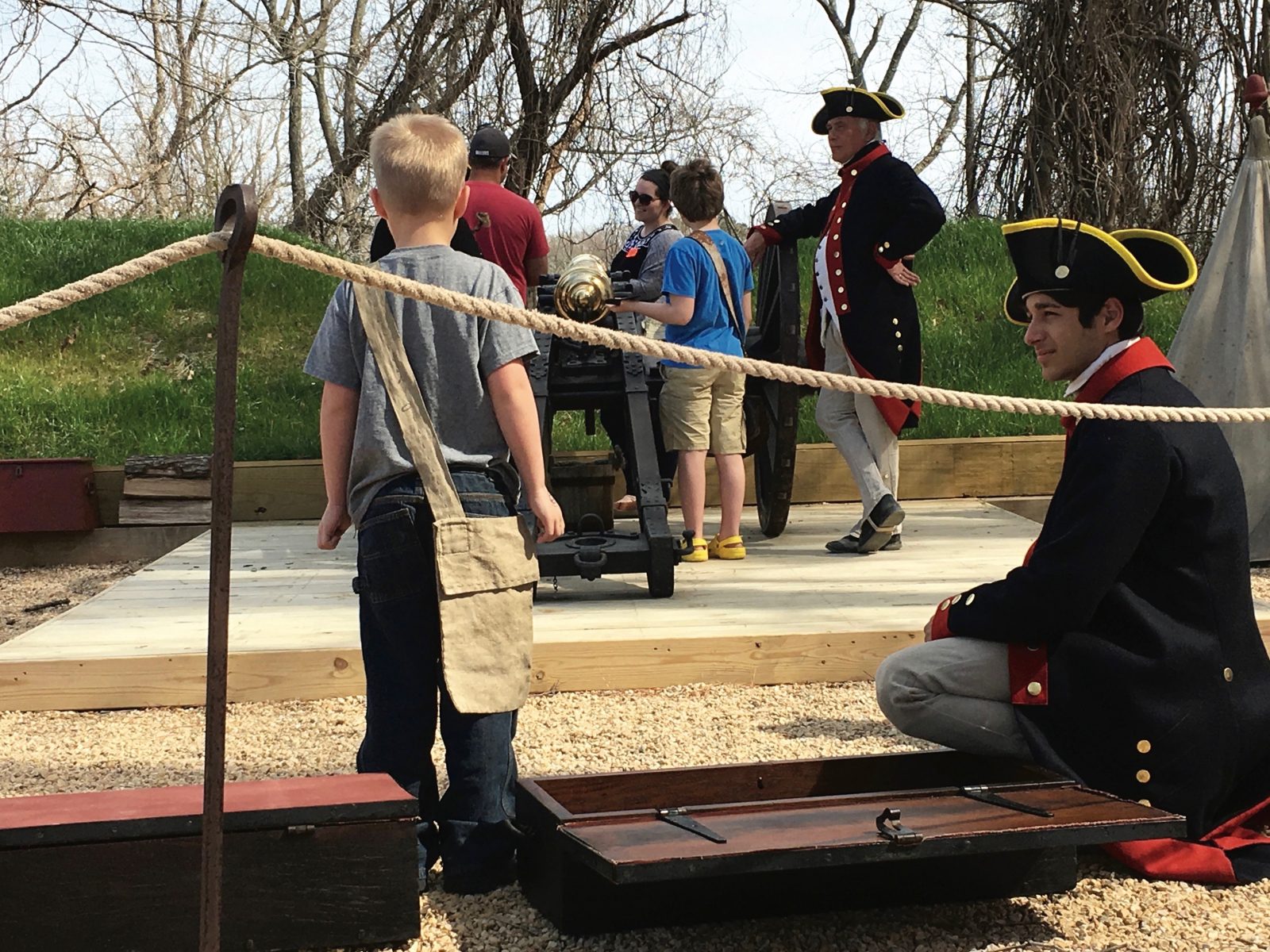 Homer Lanier, the foundation’s interpretive program manager who oversees the outdoor living history areas at both Jamestown Settlement and at the American Revolution Museum at Yorktown, says that every part of the redesigned museum is meant to encourage “light bulb moments.” Lanier hopes that the encounters visitors have at the museum will inspire dialogue about what they’ve seen. “Hopefully on the way back home or to the hotel or classroom, the experiences will be conversation starters,” he says.

For example, Lanier and other foundation historians modeled one of the two outdoor living history areas at the American Revolution Museum at Yorktown, a late 18th century farm, after the homestead of Edward Moss, a middling Virginia farmer who inherited six enslaved laborers. “It was important for us not only to tell the story of Moss and his family but of the enslaved African Americans as well,” Lanier says.

One of the buildings in the new farmstead, for instance, is the slave quarter, which interprets history that has not received as much attention because it’s sometimes a tough subject to talk about. But Lanier says that the topic of human bondage is full of telling details. One example of how interpreters will convey the nuances of slavery is by incorporating “special items that enslaved people would have hidden from their master,” he says.

The backbone of the museum’s outdoor exhibits continues to be hands-on learning—cooperative tasks ranging from picking carrots to making candles, seasonally appropriate chores that are performed with the rhythms of the seasons as they would have been in the 18th century.

The military encampment, which interprets a Continental Army camp during the American Revolution, has added a drill field and parade ground, where visitors can fall in and drill with wooden muskets.

But the newest feature of the encampment sure to cause a stir is the artillery amphitheater, a tiered viewing arena that looks over a recreated fortification similar to the earthen fortresses soldiers made at Yorktown during the war. Twice daily, interpreters will fire one of five different pieces of artillery positioned on gun platforms, giving visitors a small sense of the deafening bombardment that occurred here nonstop for three weeks in 1781, an engagement that secured independence and planted the seeds of American culture as we know it.