As a society that cares about where our food comes from, we, as consumers, passionately demand that our local restaurants’ offerings be locally sourced, organically grown, ethically treated and beautifully plated with fancy garnishes while, of course, dazzling our palates to the fullest.

Here’s the truth: running a farm-to-table restaurant is hard work. Coordinating with local farmers can be a precarious process. Having a garden out back from your restaurant requires added hours and energy, from planting seeds to pulling weeds. And yet, many of Coastal Virginia’s chefs and restaurant owners don’t flinch at the extra time and commitment that goes into sourcing local ingredients. It’s because they share that passion of following their food and maintain a responsibility to their patrons and to the small farms they support.

So, what does it take to make a true farm-to-table meal? We followed a local chef for a day to find out. The journey led us from an oyster farm in Gloucester to a high-tunnel garden in Williamsburg, then into the kitchen, where we witnessed the makings of a stunning (both in appearance and in taste) oysters Rockefeller dish. And yes, there’s even a fancy garnish. 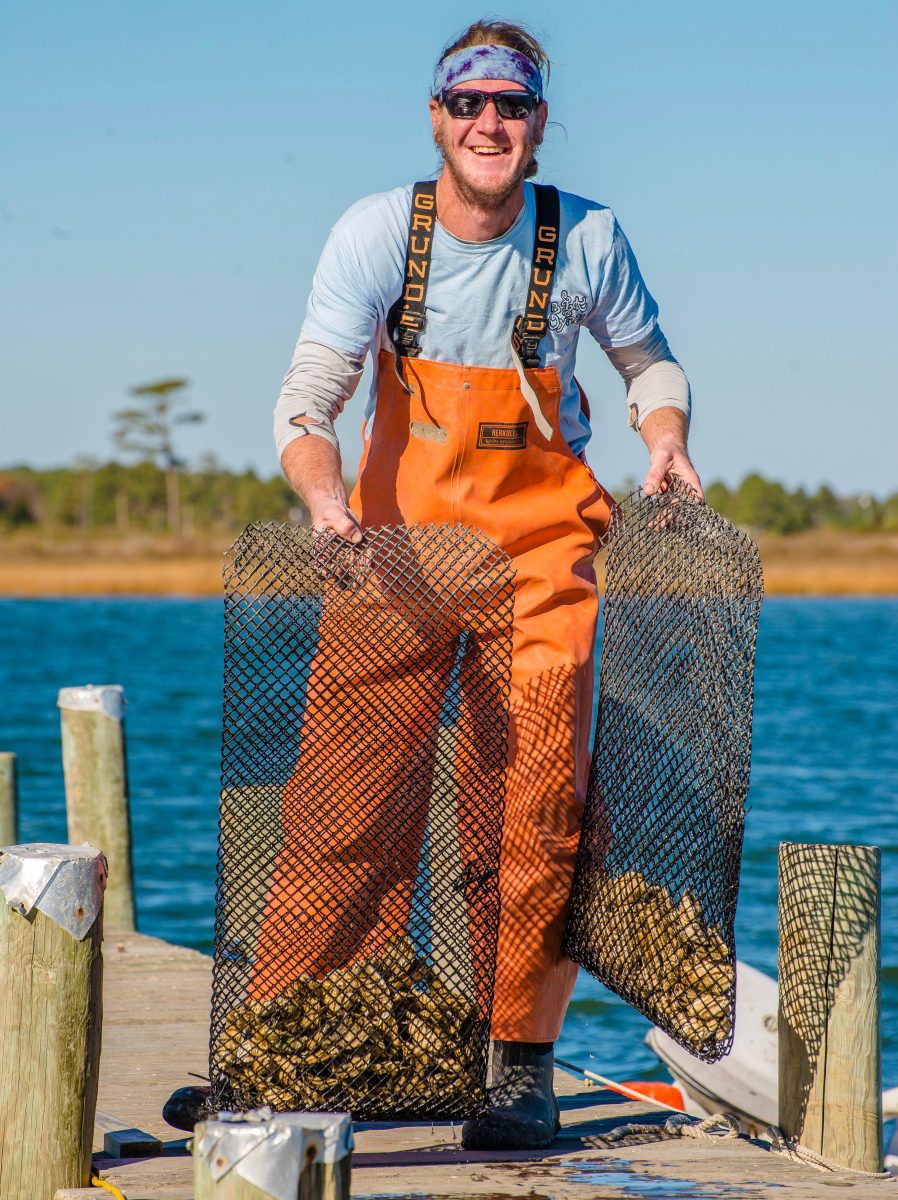 “I’m the happiest oyster farmer ever.” 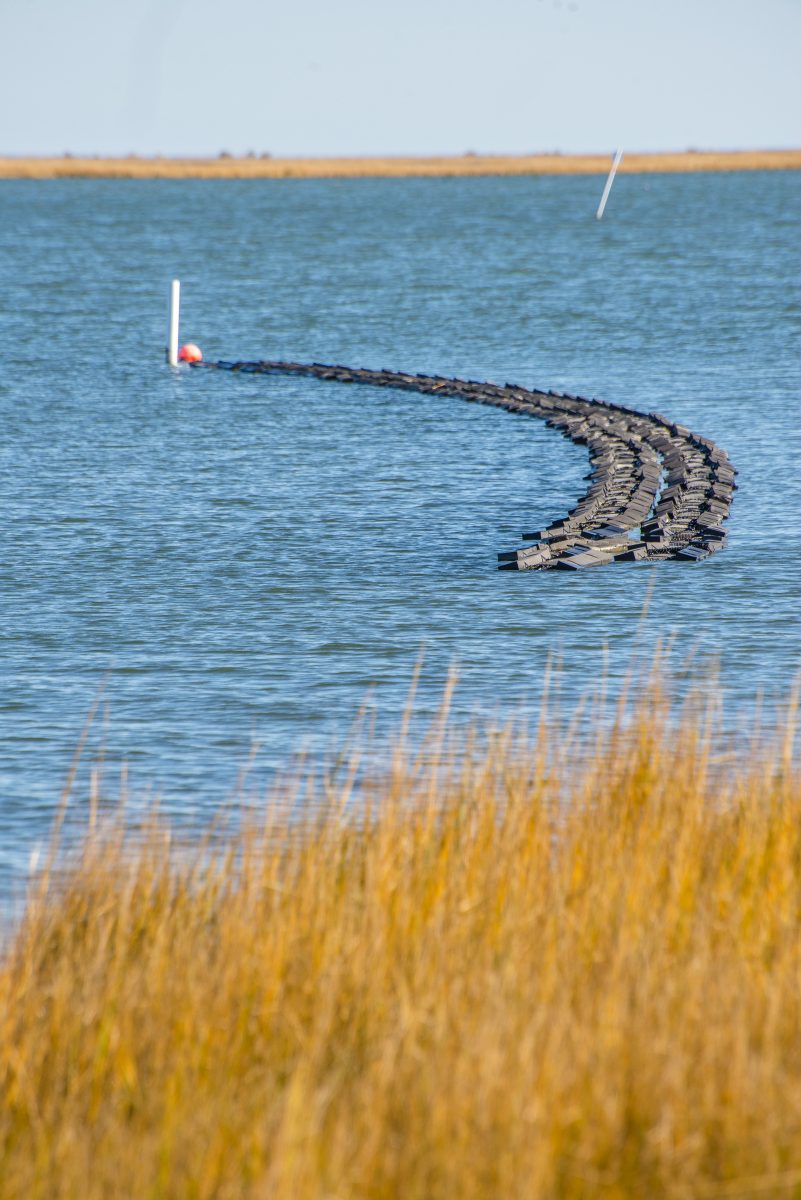 Big Island is a marsh island that was, not so long ago, inhabited by Guineamen, independent watermen who speak a unique dialect and have been generally known to keep to themselves. As the years pass, fewer Gloucester residents refer to themselves as Guineamen, and if this distinct breed represents watermen of the past, folks like Bruce and Daniel Vogt, father and son co-founders of Big Island Aquaculture, represent the watermen of today. 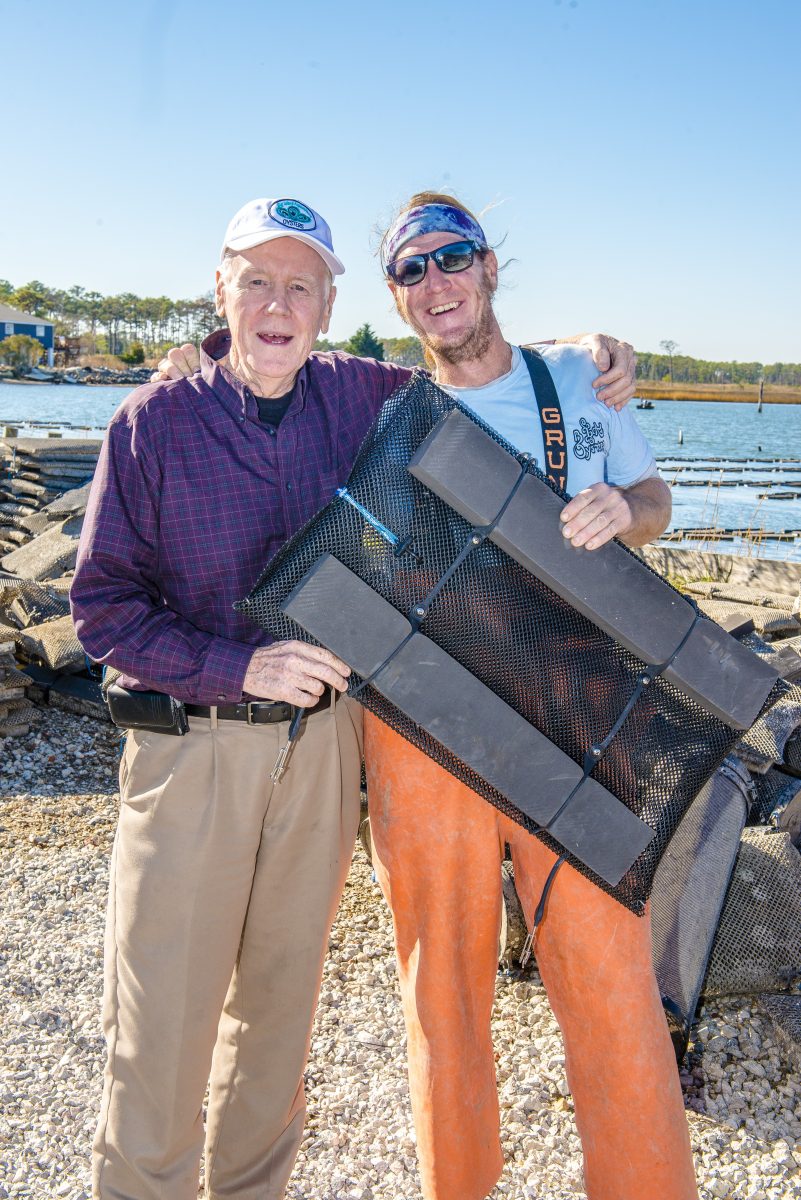 Though neither resemble the shy, surly stereotype of a hardworking waterman, the father and son business owners also don’t resemble one another. Bruce, who handles the marketing, ordering and deliveries, is clean-cut and soft-spoken, while Daniel, in charge of the oysters and labor, cheerfully trots across the dock, cigarette in hand, donning flip-flops and a tie-dyed bandana. It’s plain to see that Daniel enjoys his role in the oyster business, but he’s not shy about proclaiming it either. “I’m the happiest oyster farmer ever,” he grins. “I love what I do.”

Perhaps Daniel’s demeanor contributes to the success of Big Island’s oysters. “I listen to a lot of Pandora,” he tells. “I sing to ’em.” But mainly it’s the fantastic location. Their oyster farm sits in a prime spot among the York River, the Mobjack Bay and Myrtle Point Narrows. It’s in such a unique spot that waters from the Atlantic Ocean and Chesapeake Bay also swirl throughout, adding a lovely salinity to the oysters. Another factor is that the oysters are raised in bags floating on the surface of the water, filtering 50 gallons of water a day. The result is a clean, luscious blend of salty, sweet and buttery, which has gained immense popularity among local restaurants and oyster enthusiasts. The oysters also inspired The Williamsburg Winery’s executive vice president and winemaker, Matthew Meyer, to create A Midsummer Night’s White specifically to be paired with the oysters. “Matthew tasted the oysters and said it’s the best he ever had,” says Michael Kimball, the winery’s marketing director.

Big Island supplies oysters to individuals, as well as a long list of local restaurants, which Daniel rattles off while standing on his dock, a little slice of paradise cutting through Monday Creek. He welcomes people to come out to the farm to see how it’s done and says that “a decent amount” of restaurant owners take him up on it, with a little coaxing. “Getting ’em out here is the hard part,” he says. “Once they come out here, they’re like, ‘Oh, yeah, we love it.’”

“It’s always relaxing out here,” says Robbins, who has been with The Williamsburg Winery since March. “We have a pretty intimate knowledge of how they do things by now. It’s really cool; you feel like you’re part of the same family.” 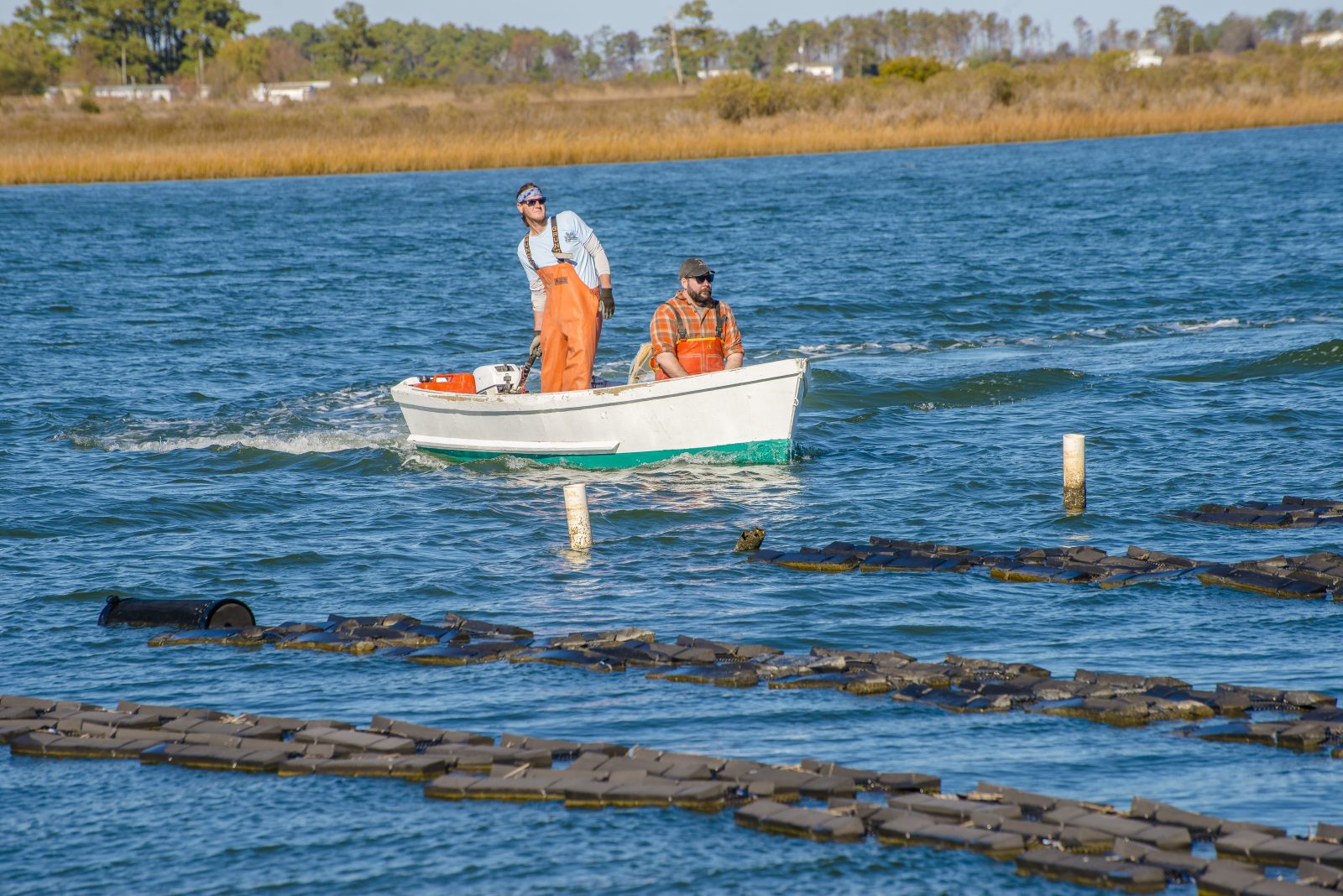 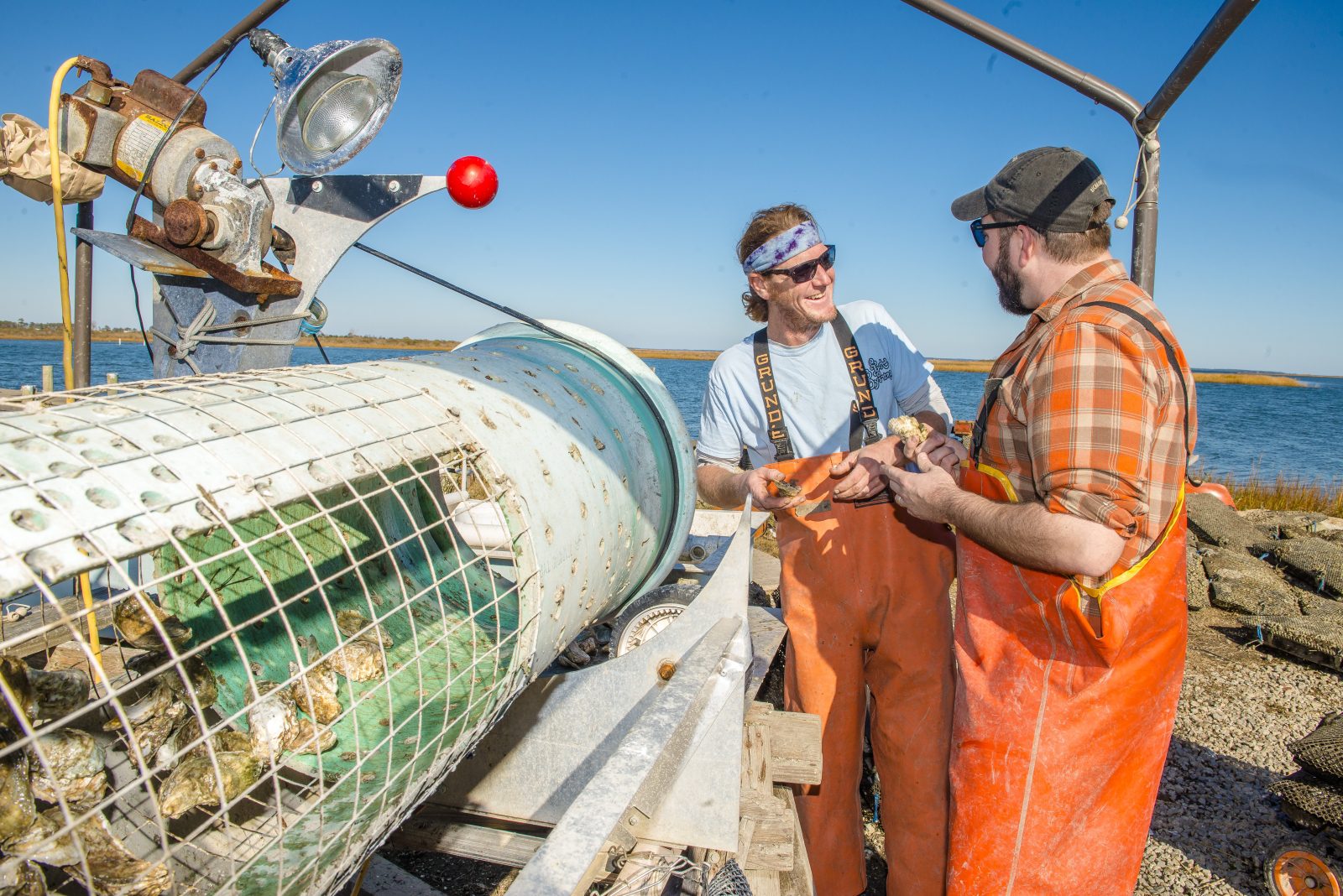 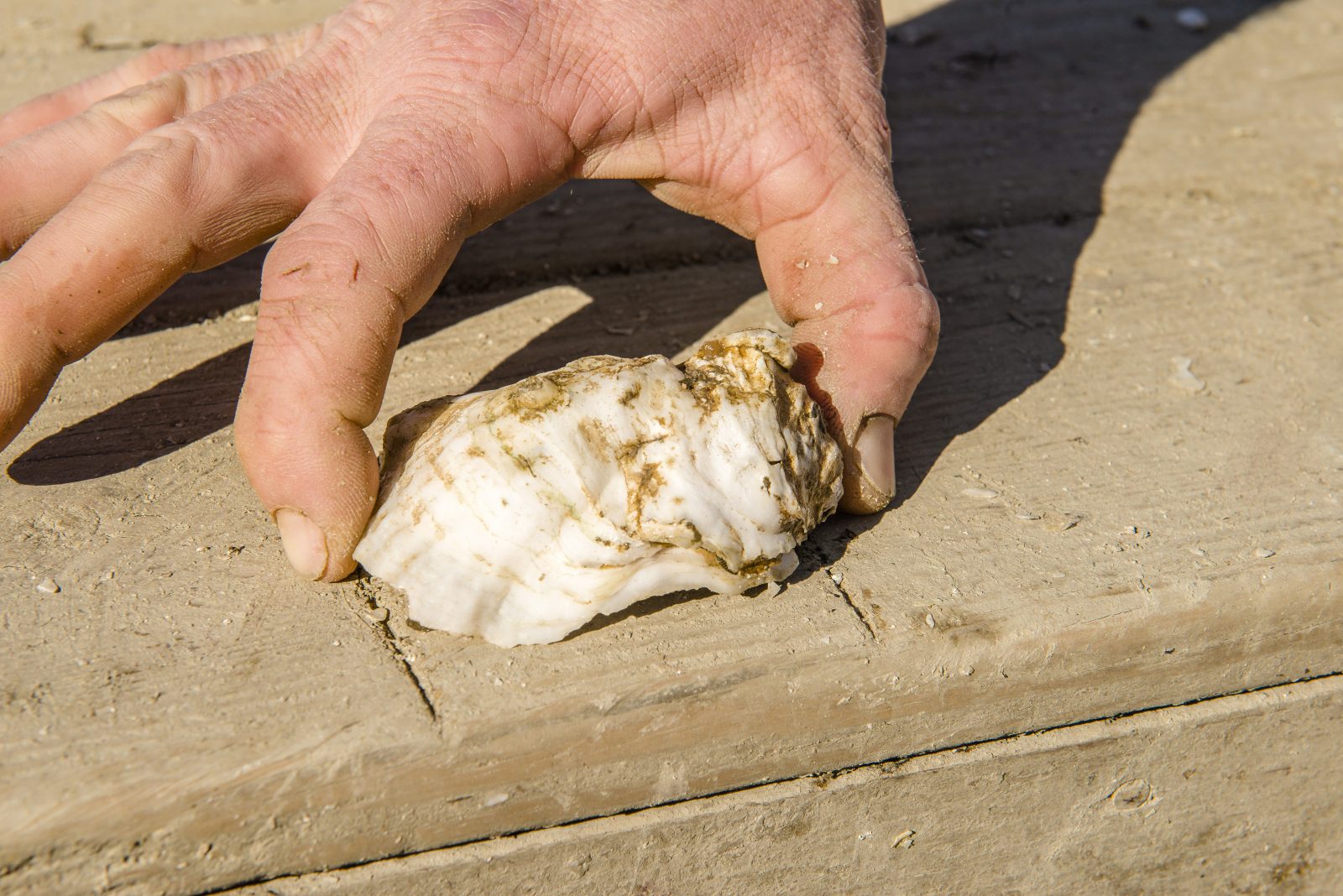 Robbins gears up with bright orange waders and hops on a skiff with Daniel, the two setting out to pull oyster cages from the creek. Upon returning, Daniel feeds the oysters through a tumbler system, which works to separate the oysters by size, breaks off growth that occurs on the outer shell and helps to thicken the shell, resulting in a deep-cupped oyster that doesn’t easily break when shucked. Professional tumblers typically run about $10,000, but Daniel made this one by hand using a drainpipe, chicken wire, lawnmower wheels and pieces of scrap metal. “This cost me 80 bucks and 80 hours,” he laughs. “Reduce, reuse, recycle; it’s the hippie’s way.” 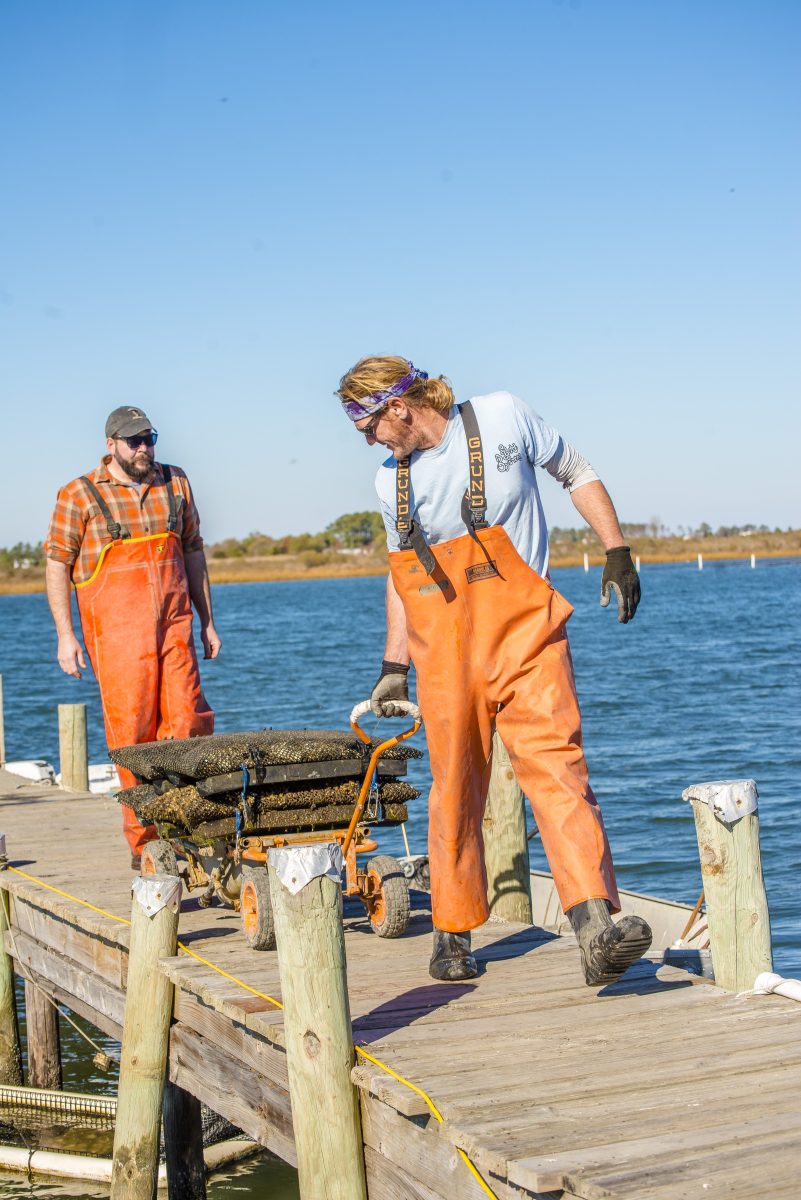 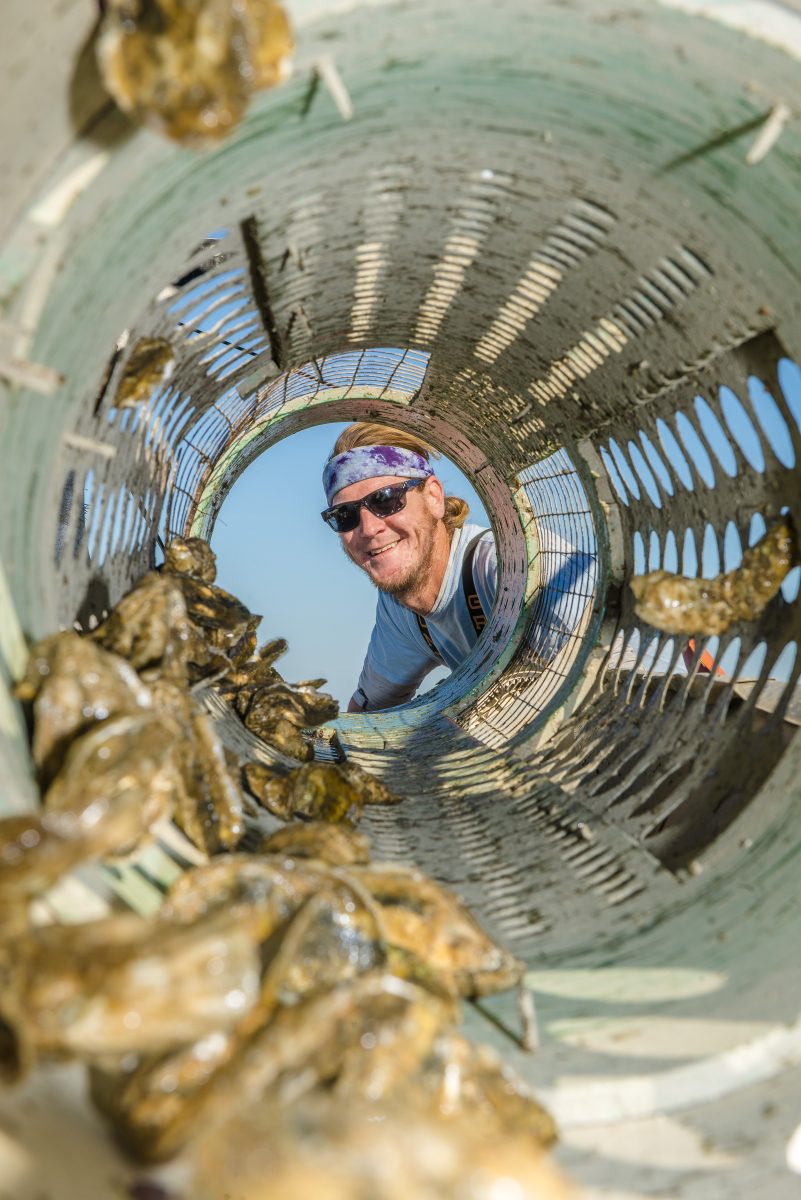 Back at Wessex Hundred, the 300-acre farm where The Williamsburg Winery sits, Robbins has ridden a bicycle from Café Provençal’s kitchen out to the property’s 40×20-foot high tunnel. Inside is his chef’s garden, which supplies a portion of the vegetables and herbs used at Wessex Hundred’s restaurants.

“The end goal for me would be to have a garden that’s functional for the kitchens but also built nicely enough to where we can have a farm table and do small, intimate events,” Robbins says. His most immediate plan, however, is to clear out the property’s chicken coop, mend the roof and raise some chickens. “If we had 20–25 chickens, we would satisfy our egg needs for the Café,” he estimates. 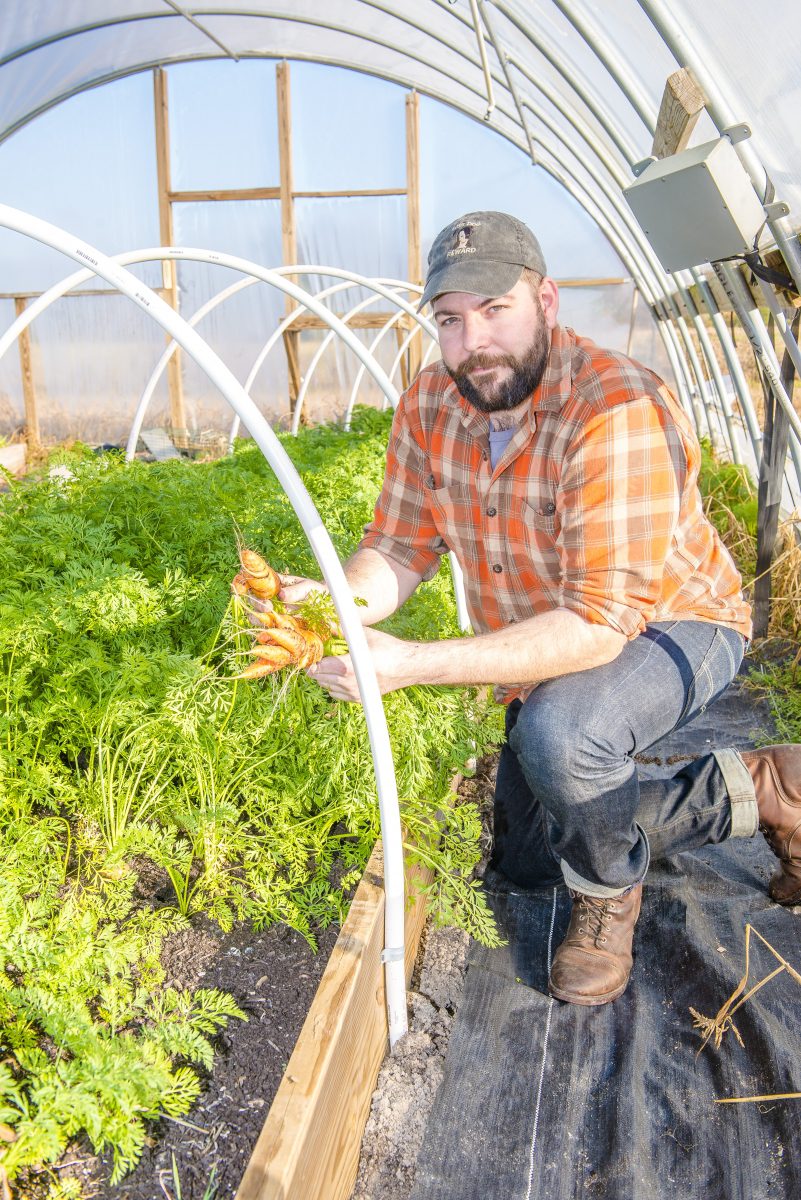 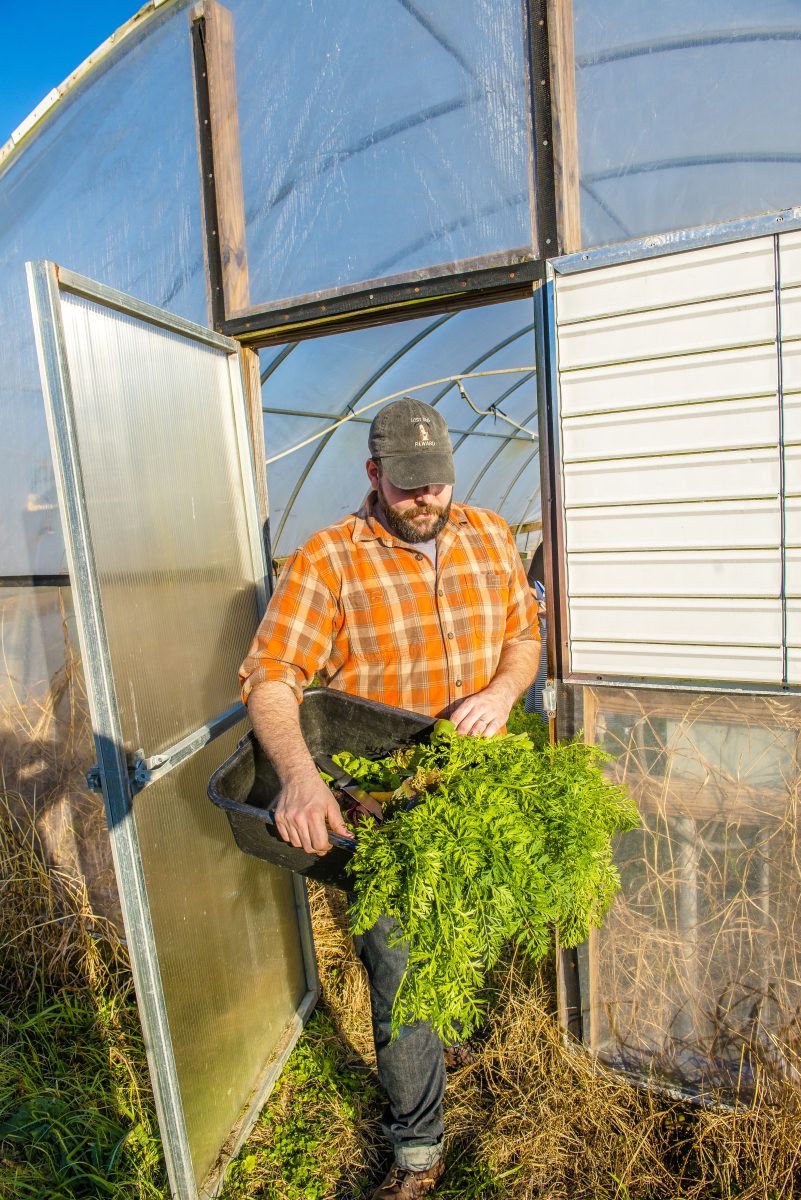 He comes out to the garden once or twice a week this time of year to gather ingredients that he’ll use in the kitchen. In the summer, however, the garden requires 2–3 hours of maintenance a day. “I’m kind of experimenting to see what the yield will be and how long it will last and how many successive plantings we can do,” Robbins says. So far, the experiment seems to be a success, with the garden providing a beautiful mix of carrots, radishes, snow peas, lettuce, arugula and some herbs. Robbins clips a vibrant bunch of arugula for today’s dish, as well as a bundle of carrots for later use, and hops on his bicycle, heading for the kitchen.

“The quality of the end product is unparalleled.”

Robbins has now swapped his flannel shirt for a crisp chef’s jacket and steps into Café Provençal’s kitchen, where he’s ready to begin his farm-table take on Oysters Rockefeller. 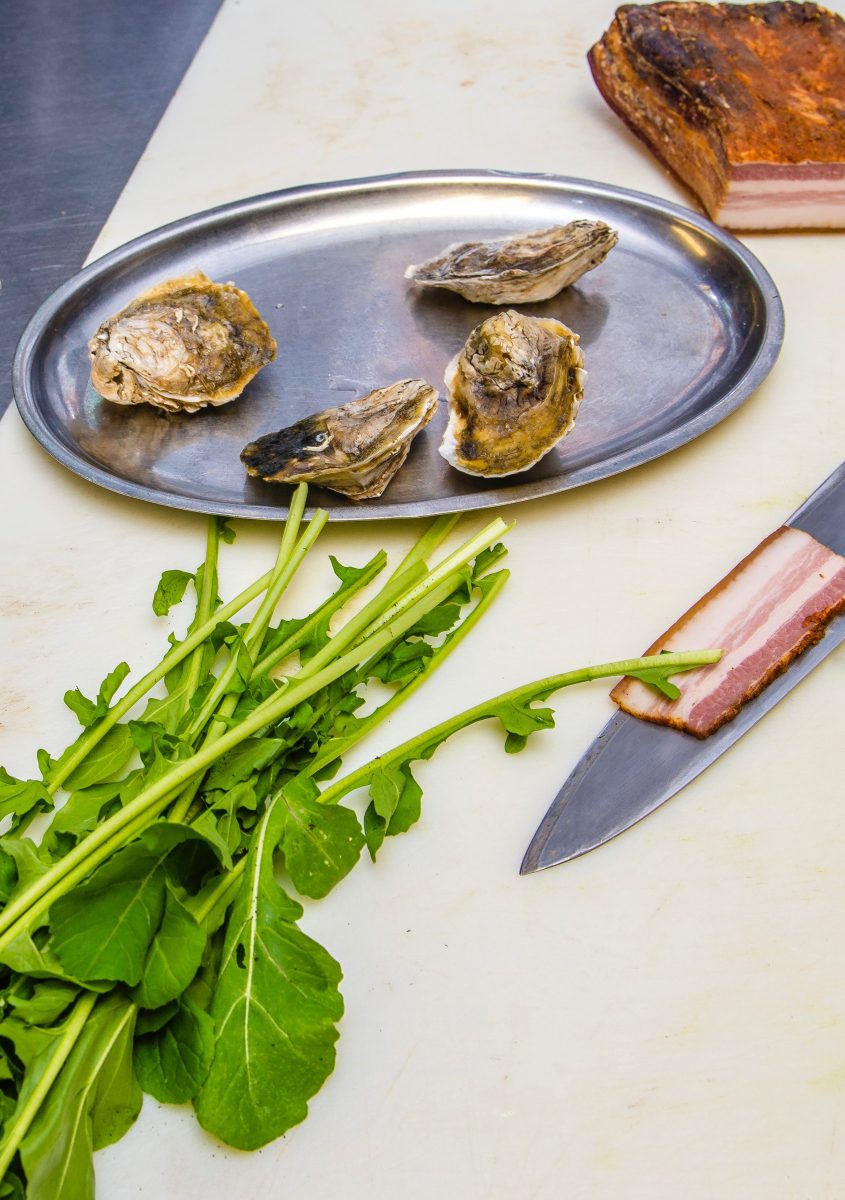 He starts by rinsing the oysters from Big Island, then sautés the arugula in a pan with garlic, shallots and a little absinthe. Robbins steams the oysters for just a couple minutes until they pop open a bit; then he shucks the oysters and places them on a plate dressed with sea salt and achiote seeds. Next, he fills the oysters with the arugula mixture and a silky, rind-washed cheese, Grayson, from Meadow Creek Dairy in Galax, Va.

On top of that, he sprinkles pork bacon made from Berkshire pigs hailing from Autumn Olive Farms in the Shenandoah Valley, as well as some sliced petals of nasturtium, a bright orange flower that adds a peppery finish to the oyster. 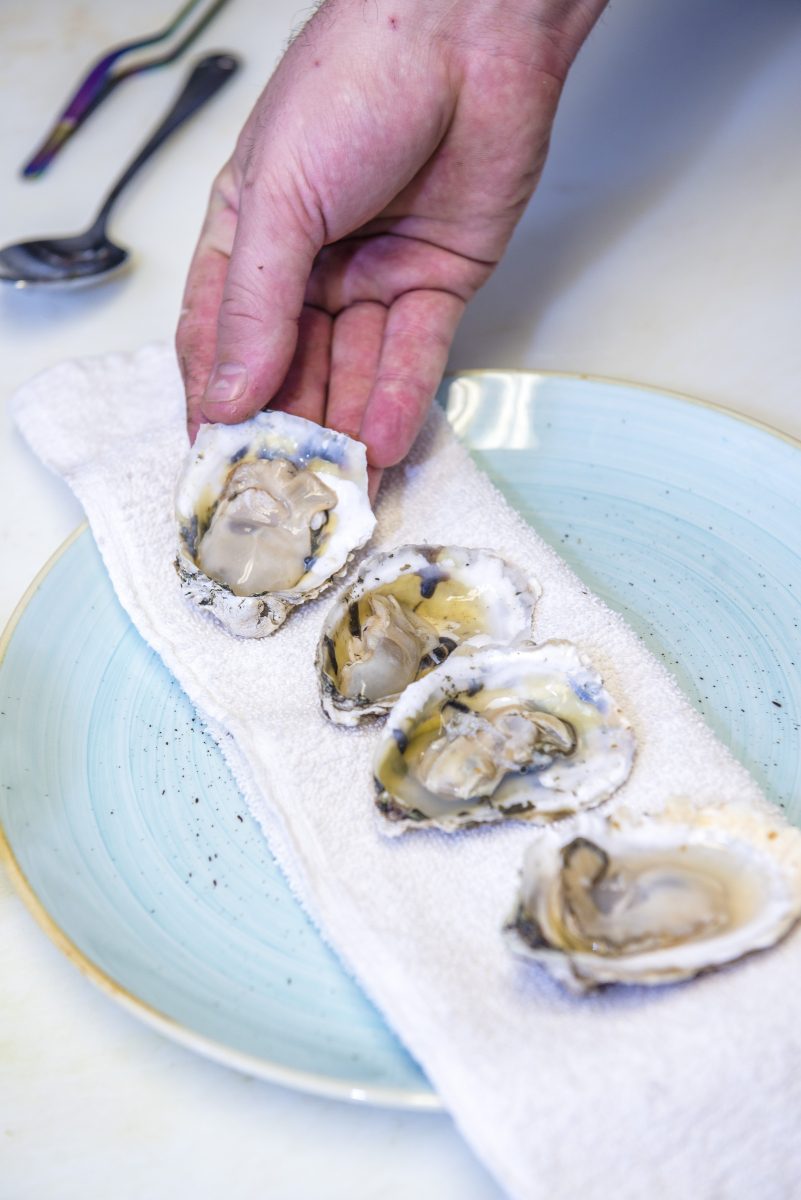 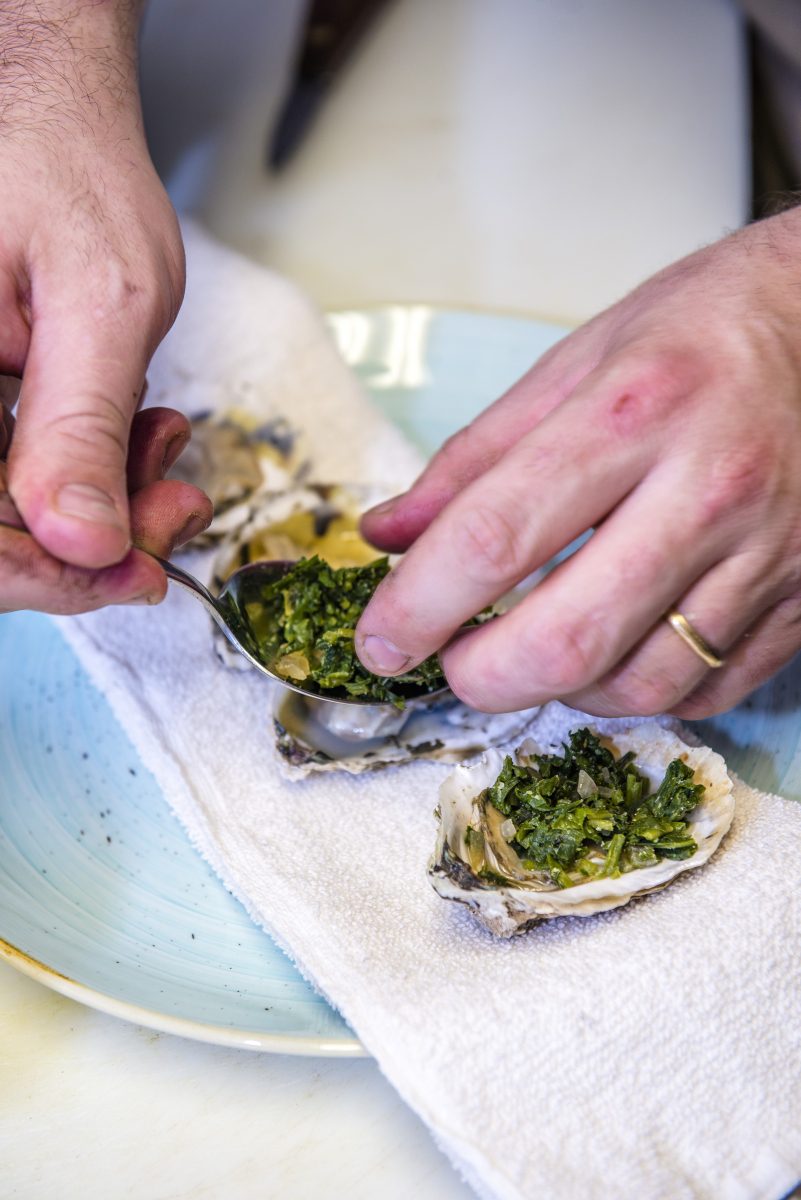 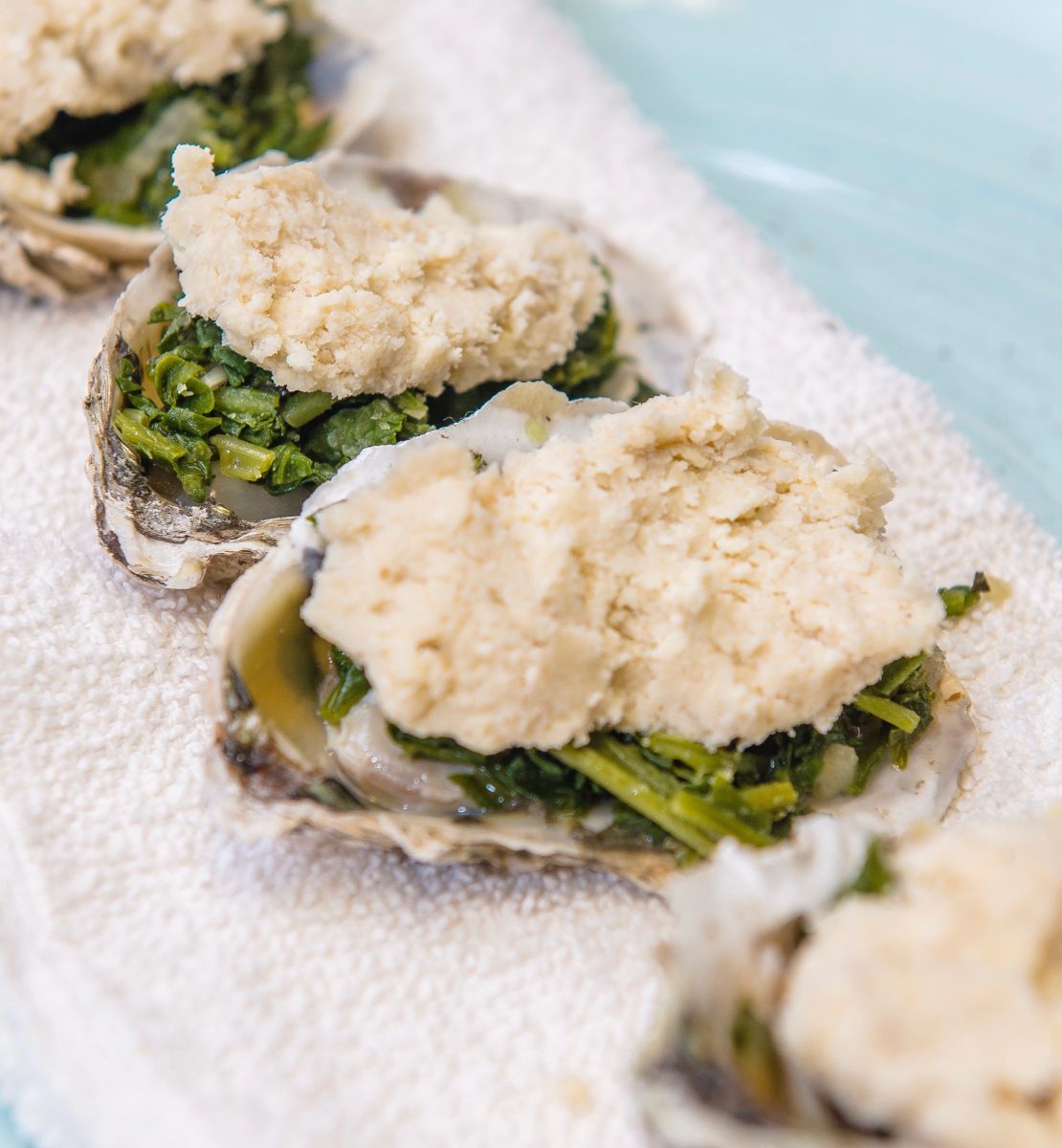 Big Island Aquaculture, Autumn Olive and Meadow Creek Dairy are just several of many farms that The Williamsburg Winery partners with to serve the culinary team’s mission of supporting local farms that raise animals humanely and practice environmental stewardship. “The winery is a small farm itself, and we are asking consumers to drink wine from our farm—to drink local, if you will,” says Kimball. “To be congruent, we need to practice what we preach. Wessex Hundred is a celebration of Virginia bounty; not just its viticulture but its agriculture and aquaculture as well.”

Robbins expresses that working with small farms is crucial, even though it’s not always an easy task. “I believe it is the only responsible way to operate, but sometimes it can be a hard thing to figure out and implement. It is all about personal networking with suppliers and growers,” he says. “Your food doesn’t have to travel as far, it can be customized to some extent, and it isn’t loaded with chemicals to make it last longer. The quality of the end product is unparalleled.”

Even though the farm-to-table method is more work than most people would imagine, Robbins says that it’s all worth it. “In the end, you forge meaningful relationships with like-minded people that want to make a positive impact.”