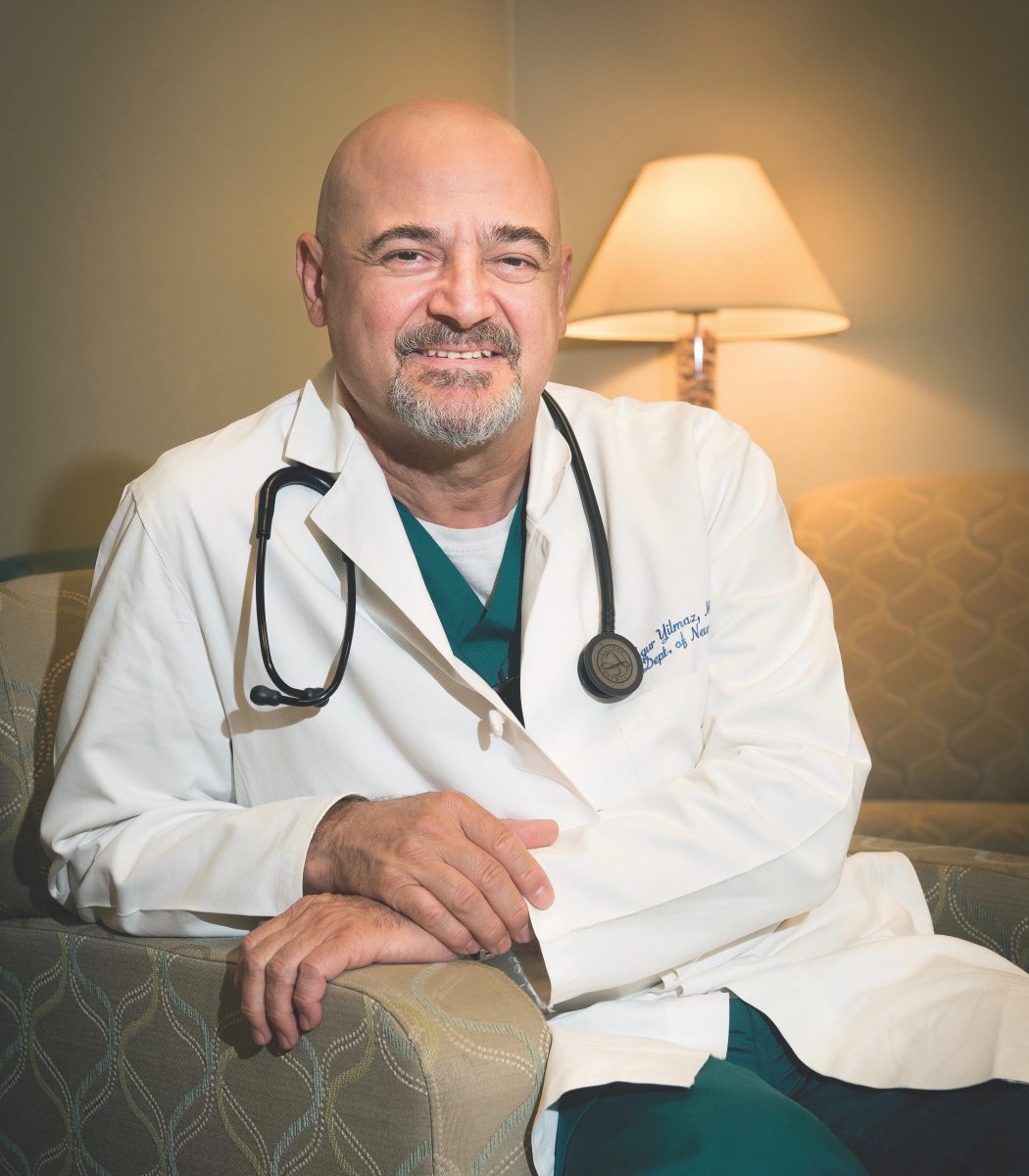 Fifty-two-year-old Newport News Neurologist Ugur Yilmaz is a bit of a Renaissance man. Born in the ancient, cosmopolitan city of Istanbul, Turkey, he was raised in a diverse multicultural crossroads amid a family of humanists. Surrounded by architecture dating to the Roman, Holy Roman and Ottoman empires, he was introduced to what he describes as the universal spiritual aspects of world religion, philosophy and art at an early age.

As a young man, this led to the study of psychology. In turn, he sought to achieve a greater understanding of the physical body.

“I have always been fascinated by the relationship between body and mind,” Yilmaz explains. “For me, this is a subject of infinite intrigue. Even now, in 2018, we are only just beginning to scrape the surface; our understanding of cognition and consciousness is in its infancy.”

Studying medicine at Hacettepe University in the modish capital of Ankara—the nation’s top medical school and world’s fifth most visited city, respectively—Yilmaz received a top-tier education while circulating among worldly intellectuals, artists and thinkers. Earning his M.D., though he focused on urology, he became intrigued by the neurological basis of various urological conditions.

“I may be the only doctor in the world that’s taken this particular approach,” he jokes. “I can assure you, it’s quite uncommon to arrive at a career in neurology in this manner!”

In 2002, Yilmaz received an invitation to become a visiting professor at the University of Washington. Allured by the prospect of exploring Seattle, which he describes as a bastion of American creative culture, he accepted.

There, Yilmaz’s interests shifted toward the central nervous system.

“I began to read about aspects of neurology that were more and more outside of my field,” he says. In particular: seizures, epilepsy, dementia and various unidentified diseases. He was amazed by the advances researchers were making and the nearly endless possibilities for discovery their studies suggested. “It didn’t take long to realize that we are living in the golden age of neurology. Not only was I hungry to learn more, I wanted to join the party.”

After a two-year return to Turkey and a string of sleepless nights, the doctor made a difficult decision. Reaching out to his former department chair in the U.S., Yilmaz told him he wanted to switch careers.

“He became very worried and said, ‘Think about it; are you sure this is what you want to do?’” Yilmaz confides with a laugh. Then 42, he was married and had a 3-year-old son. He was making a name for himself in urology. Wouldn’t it be better to simply stay the course? “When I said, ‘Look, I’m sure about this; this is what I want to do,’ his immediate response was, ‘You’re crazy!’” After a long pause, the chairman sighed. “He said, ‘I’ll give it to you, you’ve got guts. Let me see what I can do.’”

Three weeks later, there was an opening. In early 2009, Yilmaz began his second medical residency—this time in neurology.

“It was very frightening to give up everything I’d worked for and become a student again,” he admits. “But neurology had become my passion. It was what I wanted to be doing and I was confident that that [sincere desire to learn] would carry me through and lead to amazing things.”

Yilmaz came to work at Tidewater Physicians Multispecialty Group in Newport News in 2014. By then a father of two boys, in addition to a decade-long career in urology, he’d completed a residency and clinical fellowship in neurophysiology and subsequently turned down a faculty research position at UW.

“My desire was to work directly with patients and help as many people as I could,” Yilmaz explains. Furthermore, when he interviewed at TPMG, he fell in love with the area. “Here, we have a strong multicultural community and big city amenities, but it is also quiet and very friendly. The pace of life is slower … To me, this is a great place to work and raise a family.”

And the community has been lucky to have him. For four years running, physicians, patients and medical personnel have named Yilmaz their pick for Coastal Virginia’s Top Doc in Neurology. This year, he once again received more votes than anyone in the field.

“My goal is to treat my patients and their loved ones with deep respect and compassion,” says Yilmaz. Depending on the severity of the ailment or condition, neurological patients often find themselves in positions of extreme vulnerability. “Of course, I do my job to the best of my abilities. But I always strive to approach my patients like fellow human beings. As their doctor, we share an intimate experience; during that time, I seek to be absolutely present and available.”

With issues ranging from chronic headaches to early-onset Alzheimer’s to treating stroke victims in the emergency room of Mary Immaculate Hospital, the task is no walk in the park.

“I work with a lot of patients that are in critical condition,” says Yilmaz. It’s rewarding to use his expertise to better a person’s quality of life. But the joy of those successes has much to do with the darker alternatives they mirror. “For instance, I recently had a 41-year-old patient that was in a coma,” he says, his voice thick with gravity. After taking a turn for the worse, the patient was rendered braindead. “I was grief-stricken; I knew that I would have to explain to the family what had happened.”

Trying to navigate such situations with sincerity and presence is hard and emotionally draining.

But in such moments, Yilmaz returns to what he calls a lifelong practice of spirituality. Wielding data gleaned from clinical studies undertaken by other neurologists, he advises families—and reminds himself—of the proven benefits of opening to the pain, grieving authentically and using mindfulness tactics to continuously return to the present moment.

“In addressing what is actually happening in the brain, the science of neurology has given us the ability to talk about internal experience free of religious strictures,” he says. “That is very liberating. It helps patients open up and be more receptive.”

For instance, science has proven that taking a calming walk in a quiet place during a time of extreme stress will flood the brain with a cocktail of healthy, mood-boosting chemicals.

“I enjoy sharing this kind of information with all of my patients,” says Yilmaz. “To me, it is the best part of my job. I love to talk about the benefits of mindfulness and how my patients can implement these practices into their daily lives. Because I know that, if they do, they will be happier, healthier people.”