Thousands of local Virginia Tech fans and alumni had plenty to be proud of when two more of their own were inducted into the Virginia Sports Hall of Fame in April. The state Hall of Fame’s annual induction ceremony was held for the first time this year at the Sandler Center for Performing Arts in Virginia Beach Town Center.

The regional chapter of the Virginia Tech Alumni Association hosted a special post-induction celebration in honor of legendary Hokie coaches Frank Beamer and Chuck Hartman across the street from the Sandler at the Westin Hotel, where attendees were invited to “mix and mingle with your favorite Virginia Tech coaches, players, staff and alumni.”

It’s the kind of synergy organizers are hoping for as the Hall of Fame settles in to its new home and a totally revamped business model that features a free pedestrian Walk the Hall tour of exhibits at six publicly accessible indoor locations in office and hotel lobbies in Virginia Beach Town Center. The new tour officially opened Feb. 5 and follows the closing of the Hall of Fame’s signature brick-and-mortar location in Olde Towne Portsmouth due to financial challenges in 2017. 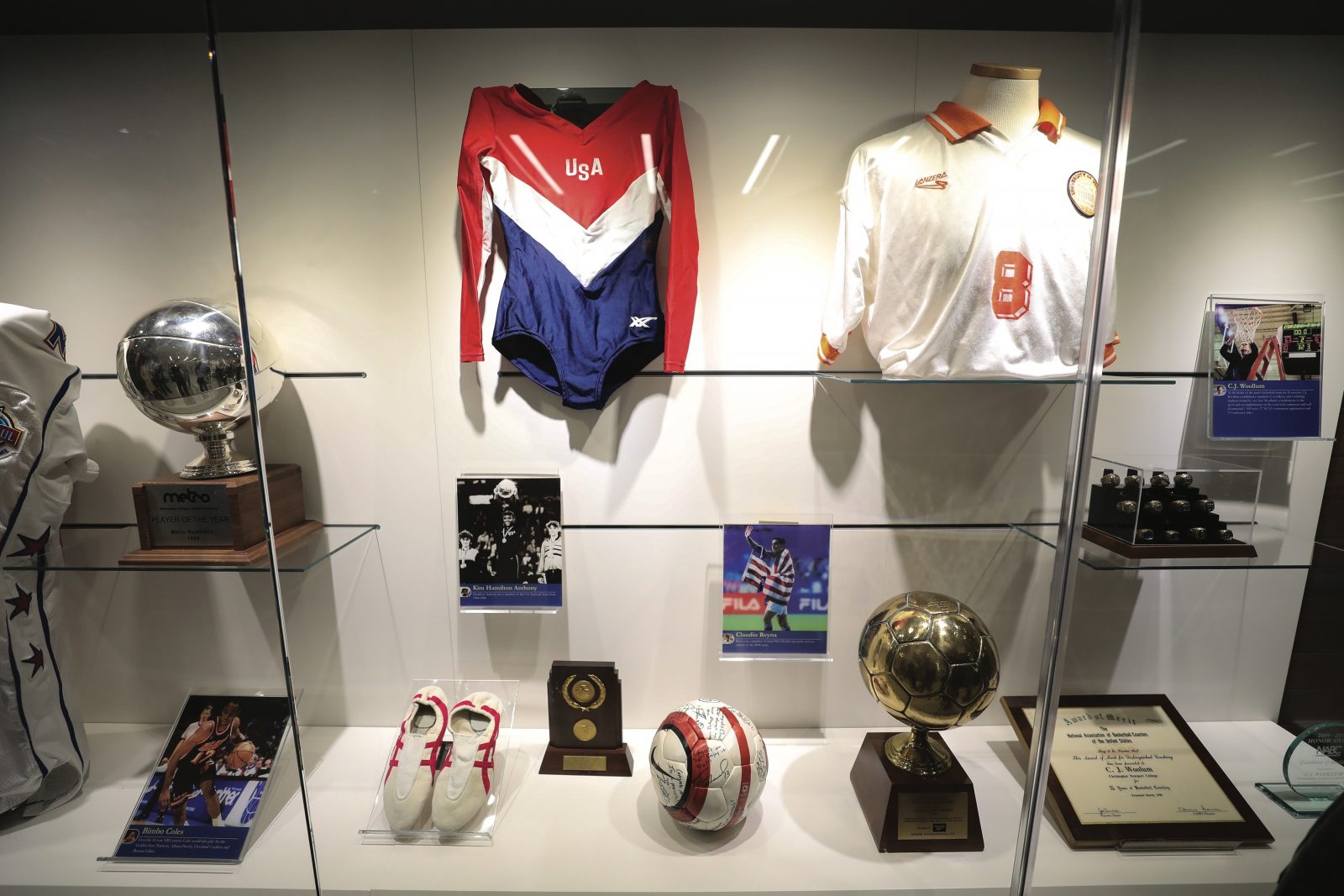 Items in the Hall of Honor exhibit from the 2017 class 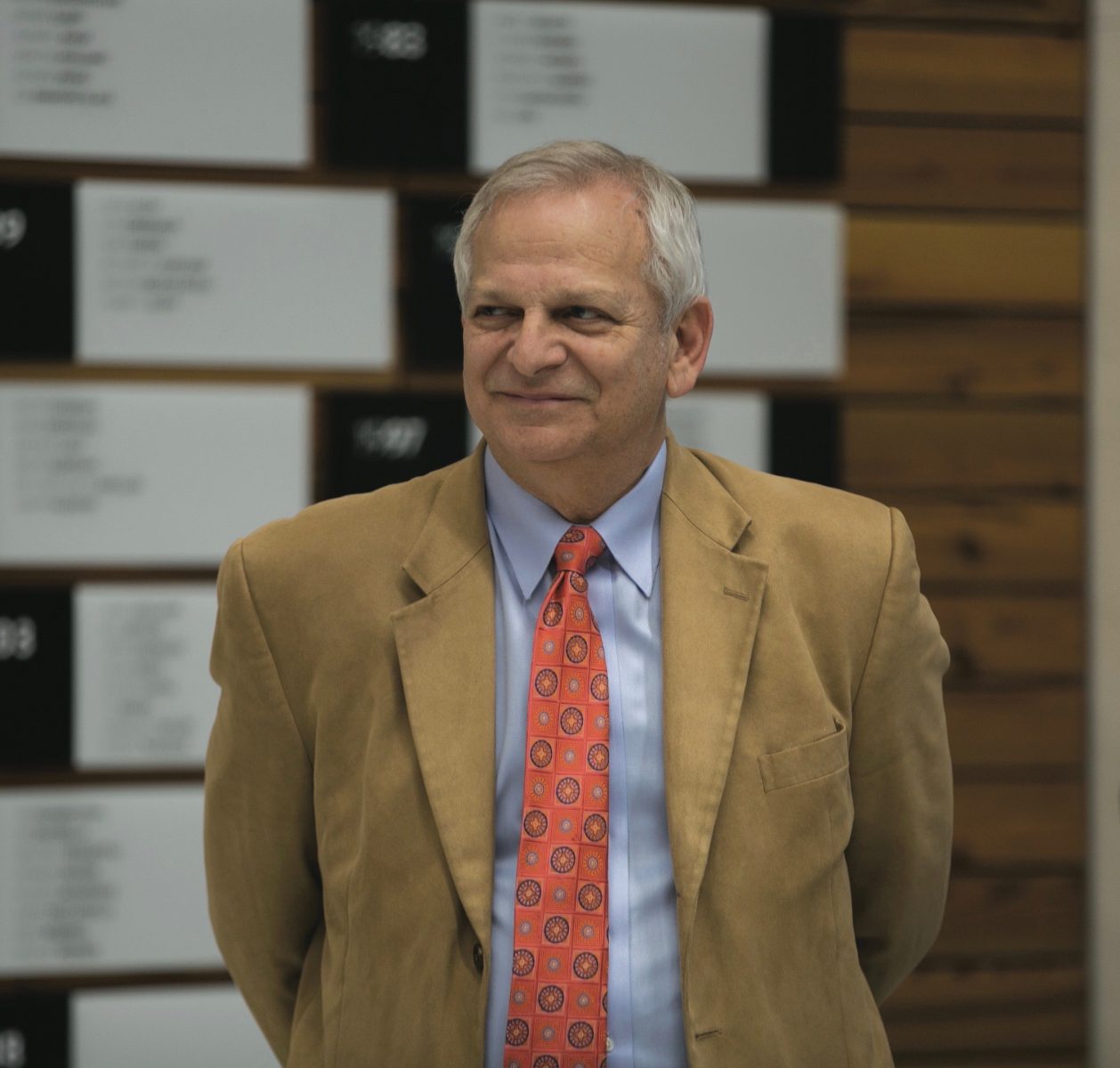 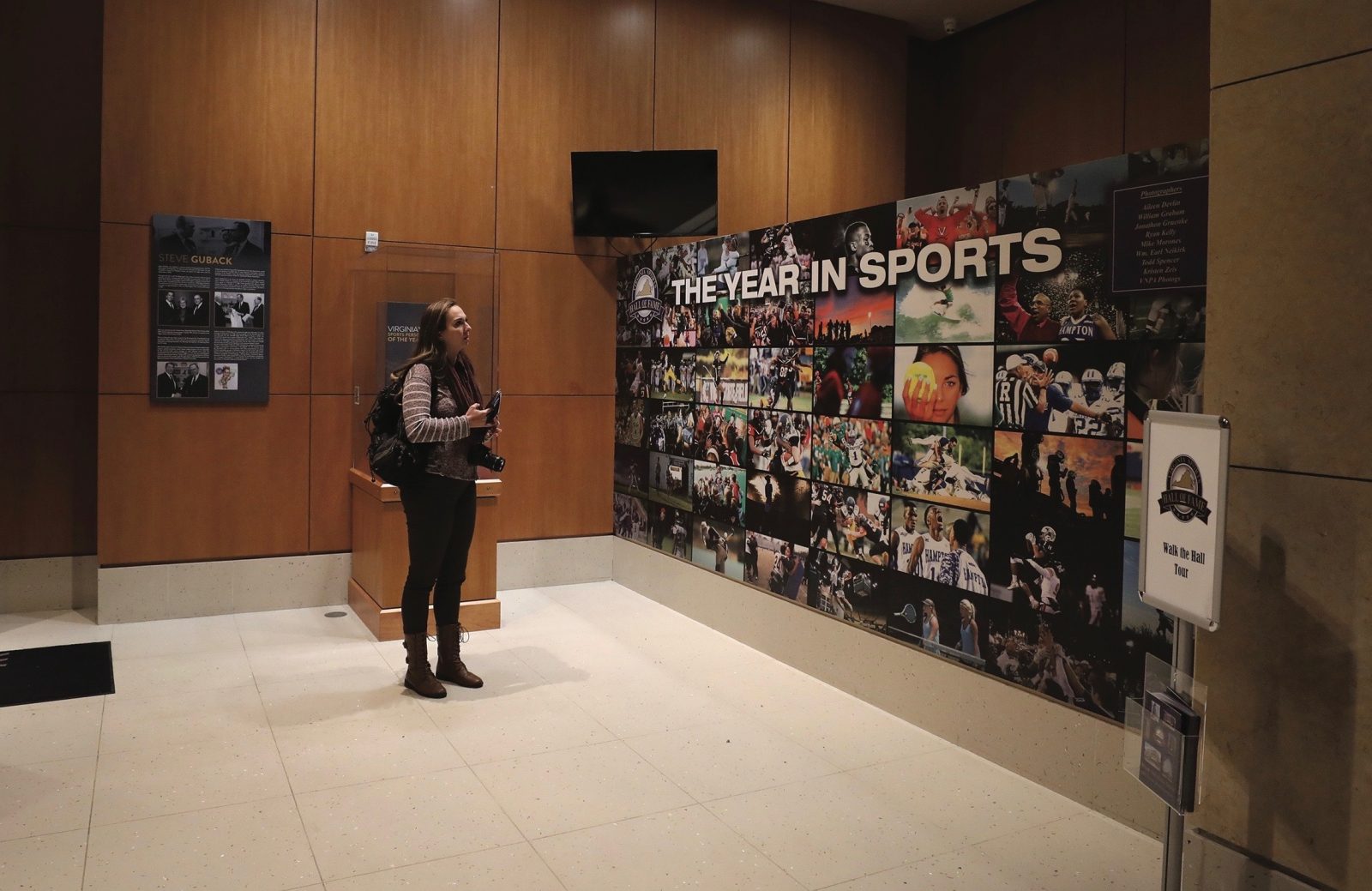 Year in Sports Photography exhibit at the Westin Hotel

“From the Blue Ridge Mountains to the Atlantic Ocean, Virginians are proud of the special place that sports hold in their lives,” says Portsmouth-born track star and Olympic gold medalist LaTasha Colander Clark in a video that plays when visitors scan a digital code on the “College and Universities” installation in the lobby of the Armada Hoffler Tower. “The love for our favorite college team is a big part of who we are.”

Alumni pride is just one of the draws for Town Center visitors—from die-hard sports fans to passersby—to these exhibits, which are open to the public during normal business hours and on Saturday mornings. Other stops on the self-guided tour include the “Hall of Honor” featuring more than more 300 enshrined athletes and other significant sports figures with Virginia connections, “Coaching Legends,” “Golf Masters,” “National Hall of Famers” and “Year in Sports,” a vibrant display of sports photography prominently just outside the public elevator in the lobby of the Westin Hotel.

There are plans in the works for additional displays with trophies, uniforms, championship rings and much more at other locations in Town Center as well as in select Virginia Beach city recreation centers. The exhibits will be rotated or updated every six months to a year and complemented by special events like the induction ceremony or the “Hoos on First” baseball program that took place in February at Funny Bone Comedy Club.

“The programming is as important or more important than the artifacts,” says Hall of Fame Board Chair Joel Rubin. “In terms of programming that appeals to sports fans and sponsors, the sky’s the limit for us. Technology allows us to reach more audiences.”

Although it’s the partnerships with Town Center and Virginia Beach that gave rise to this new incarnation, and regional connections will be an important selling point, organizers see the Hall of Fame as a statewide brand and hope that the extensive appeal of sports for people of all ages and backgrounds will generate public interest. 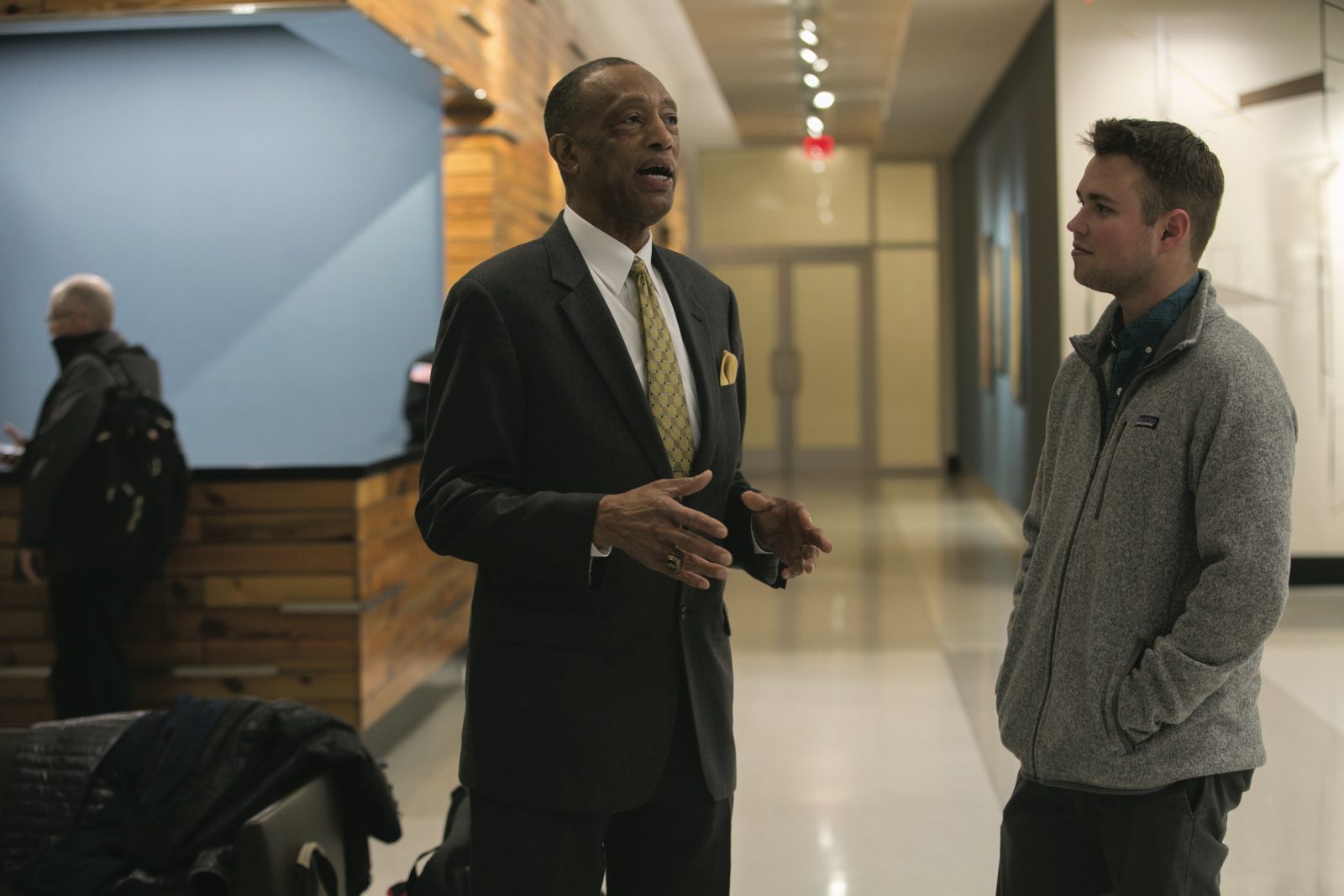 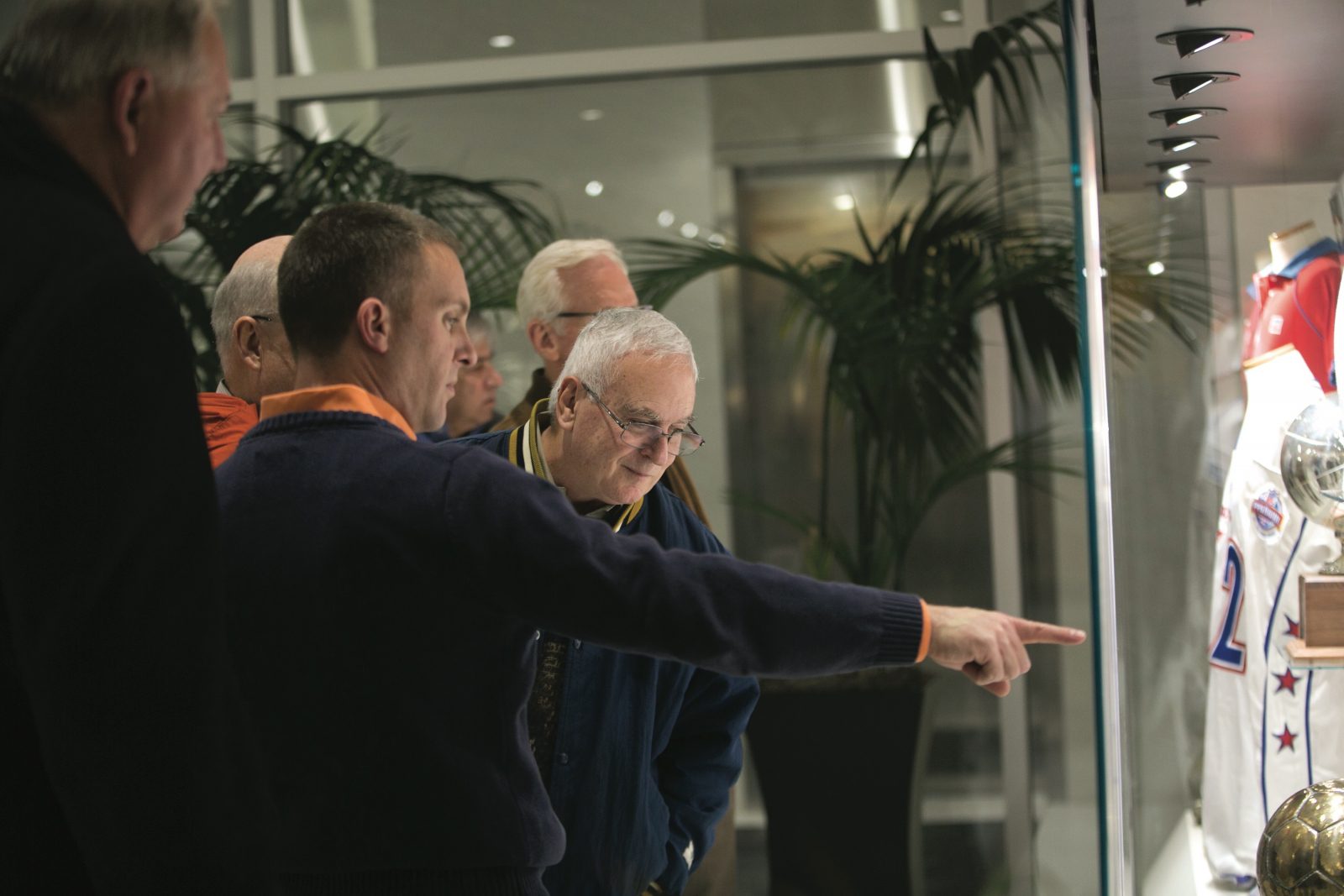 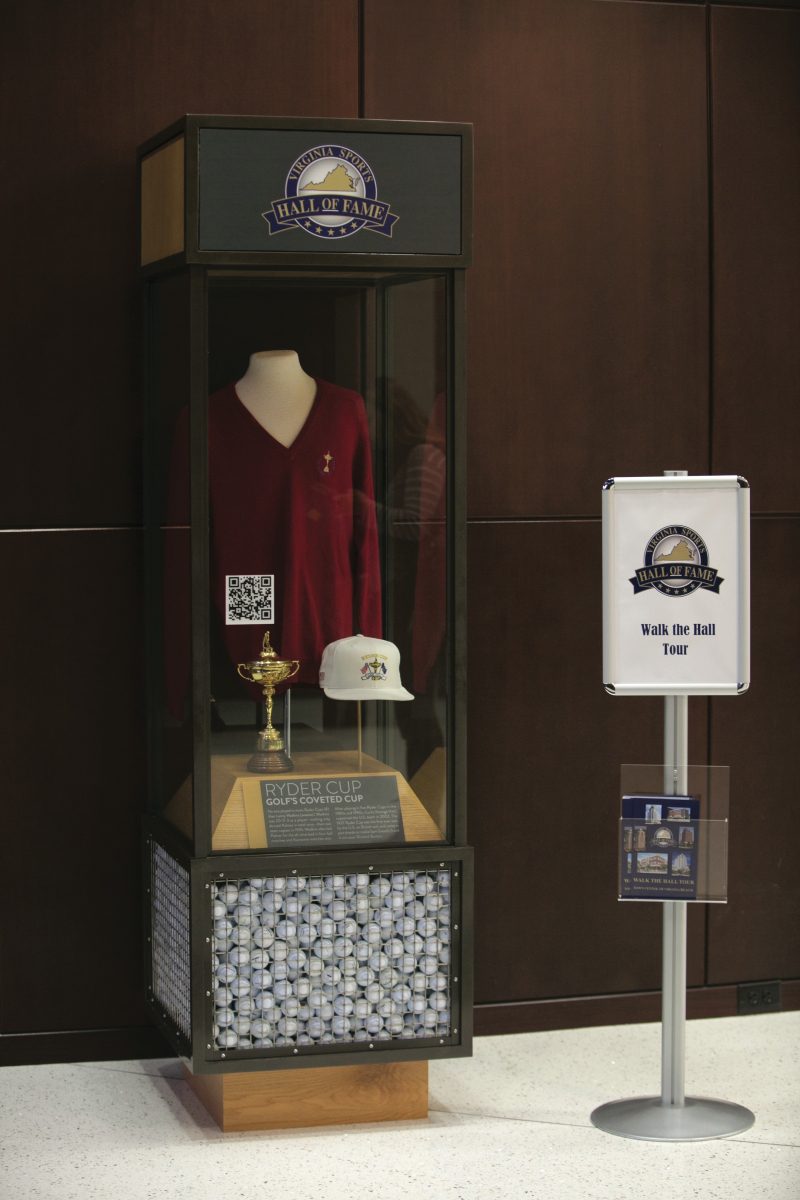 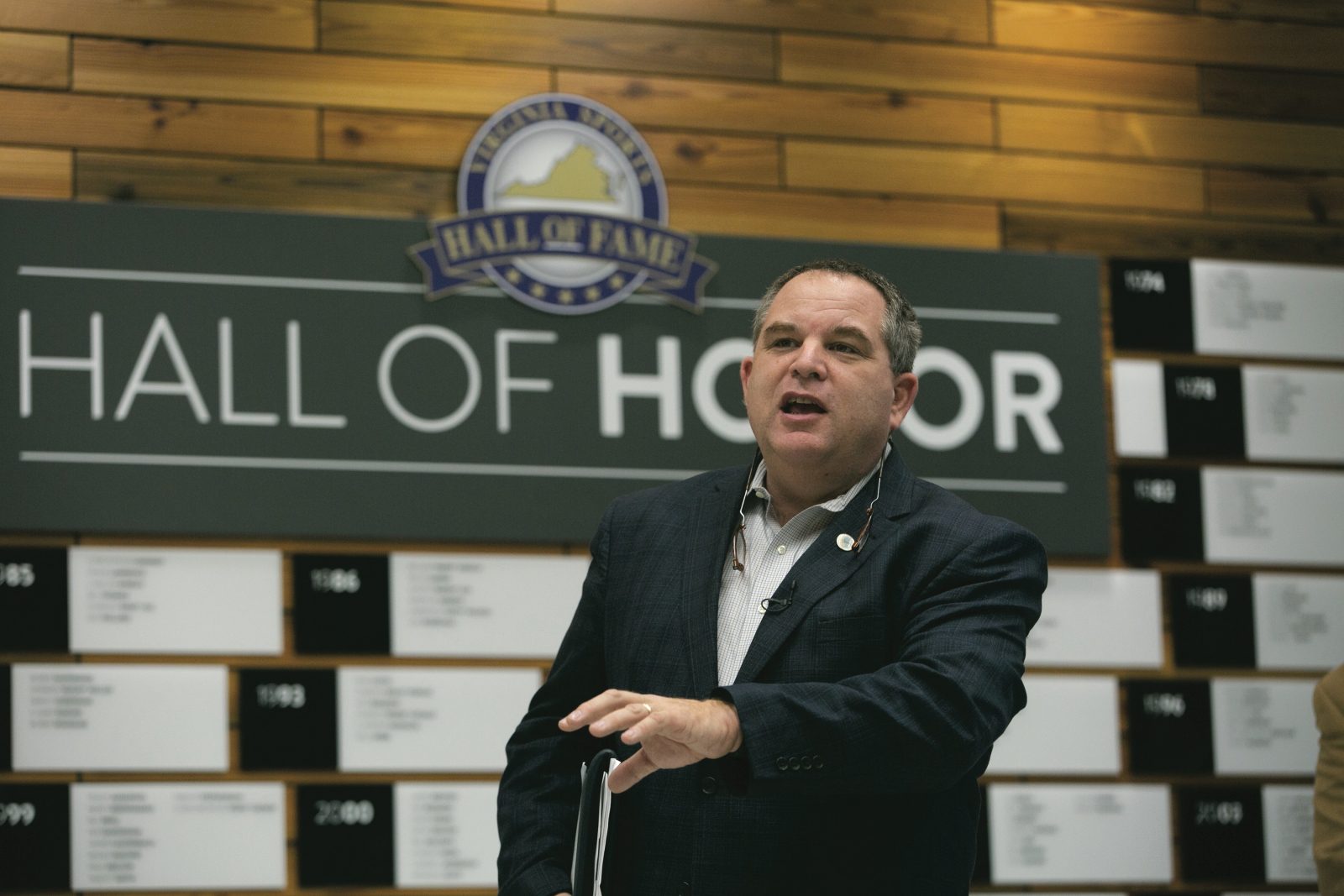 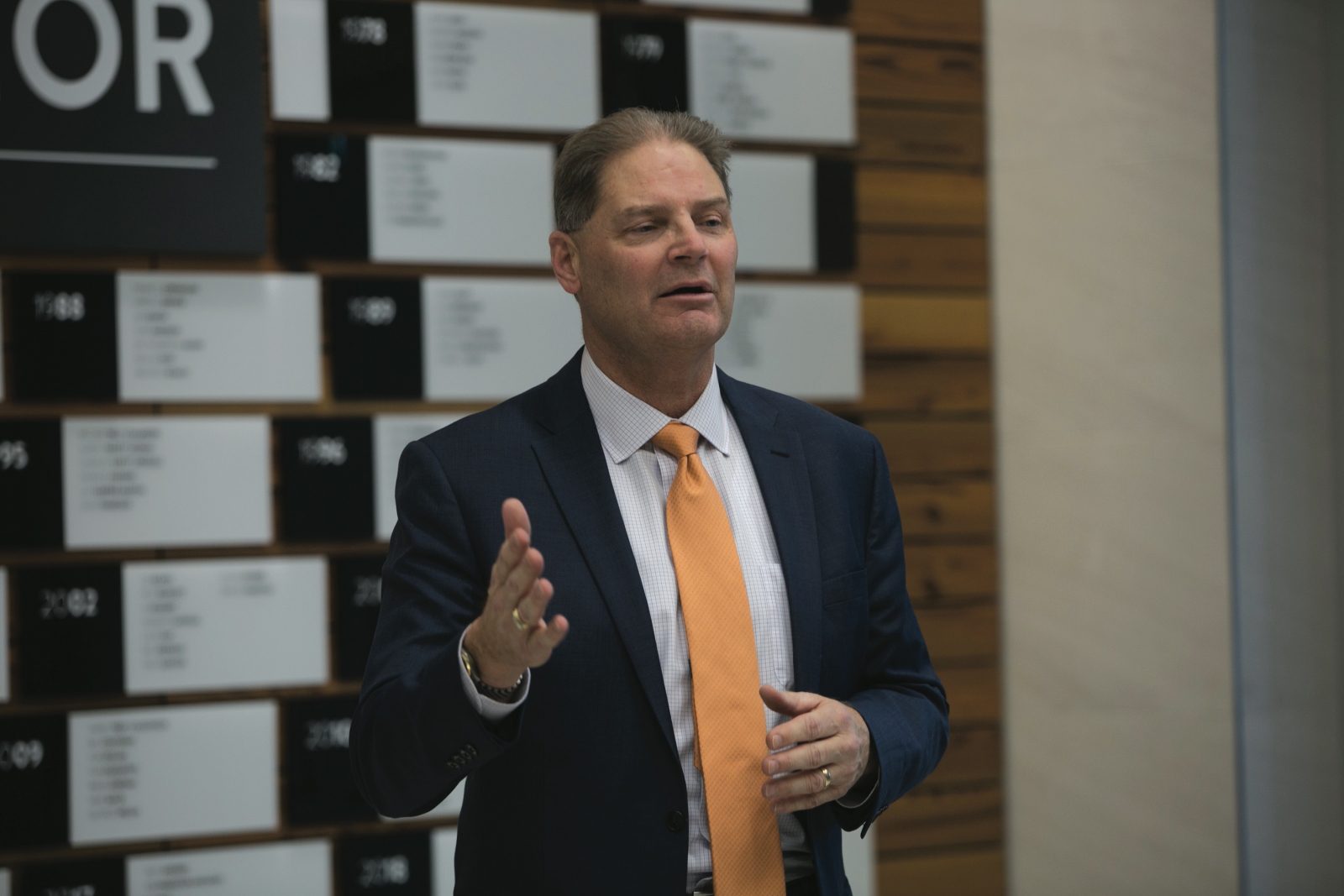 “We’re taking a broad view of the Hall Fame,” says Rubin. “So, it’s not just what happened yesterday, but it’s active. And those stories of chasing the dream are so compelling.”

Founded in 1972, the Virginia Sports Hall of Fame was facing the very real possibility of permanent dissolution after city and state subsidies that covered two thirds of the museum’s $1.5 million annual operating budget dried up in 2016. In 2017, the Hall of Fame closed its $12 million, 32,000-square-foot museum building in Portsmouth and began looking for an economically viable solution that was not dependent on public funding.

“We can no longer be in the museum business,” says Rubin. “Now we don’t have to maintain and heat a building, which is tough to do without a huge endowment or government support. We are reducing our expenses by probably 60 percent while increasing our brand exposure.”

Their partnership with Town Center allows free use of the lobby spaces and exposure to the tenants, residents and visitors who occupy them. The Hall of Fame in turn provides content and encourages customers to patronize Town Center restaurants, retail businesses and entertainment venues. In theory it is a win-win with the goal, as Rubin says, to “make Virginia Beach and Hampton Roads more lively places to live and play.”

At the opening event, Hall of Fame President Eddie Webb acknowledged that this new venture is a “leap of faith” based on a novel concept for which organizers could find no real precedent. By creatively leveraging partnerships and the existing traffic and energy present in Town Center, they hope to do more with less: “What we have done is we are taking these exhibits to where the people are.”

For patrons, it means free admission. It also means the chance to enjoy the whole tour or the individual exhibits at your own pace. The displays will change regularly, so visitors can always come back and see something new. They can also attend special Hall of Fame related events and programs throughout the year, whether in Town Center or elsewhere in the region or the state. 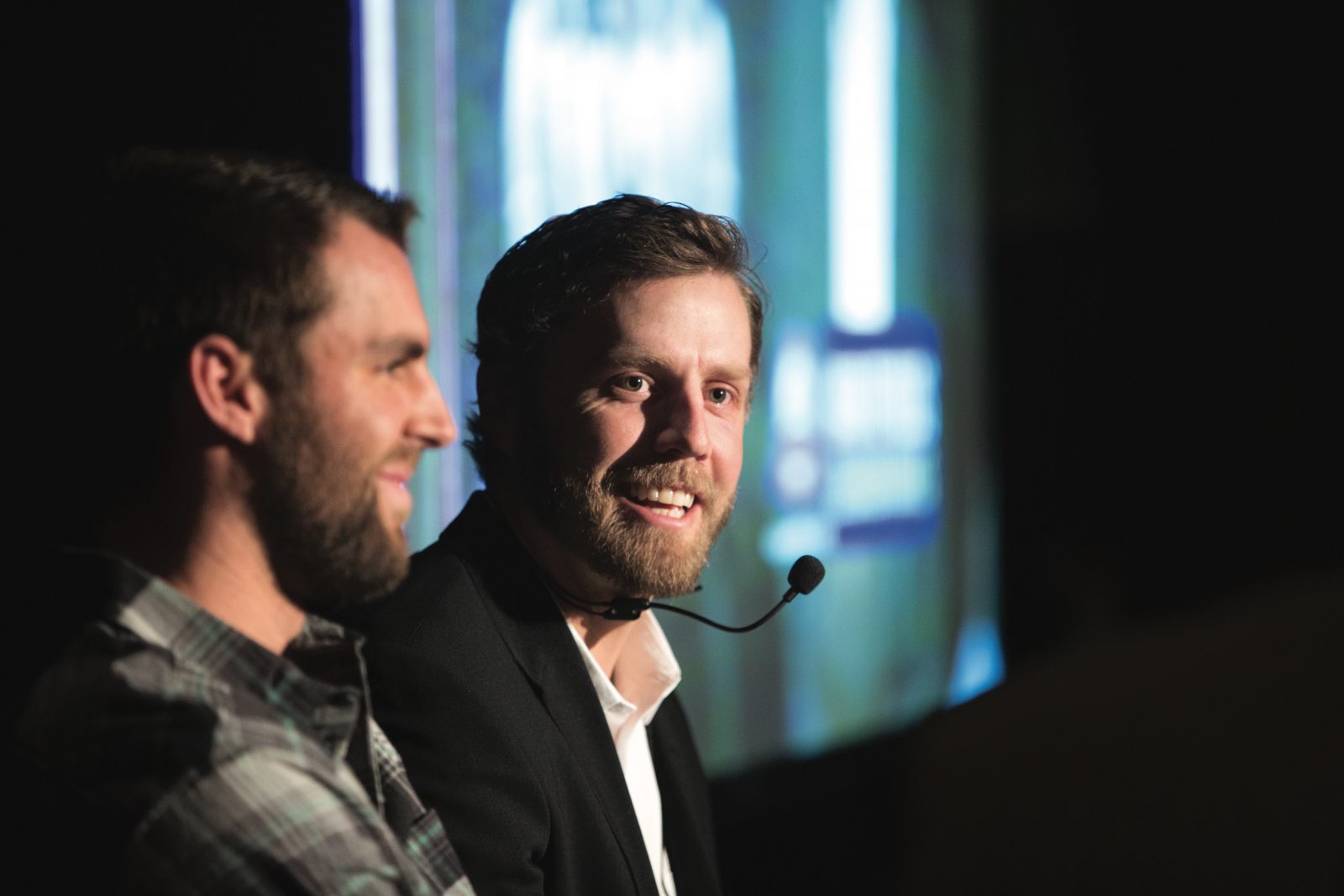 Chris Taylor of the LA Dodgers and Mark Reynolds of the Colorado Rockies, both
natives of Virginia Beach and former baseball stars at UVA. 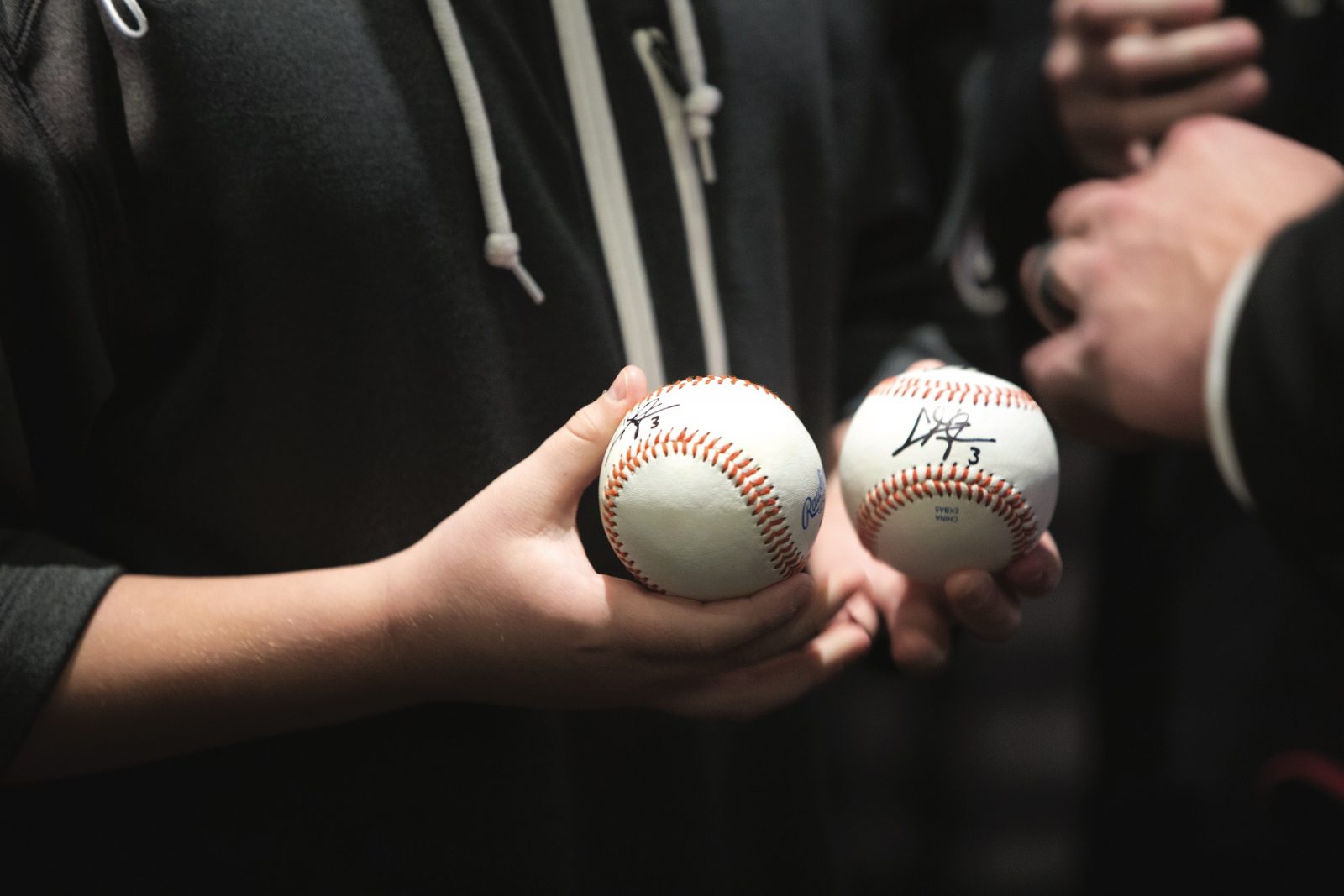 Baseballs that a fan brought to the Hoos on First event, signed by Chris Taylor and
Mark Reynolds.

The tour begins in the lobby of the Clark Nexsen building, between West Elm furniture and Anthropologie clothing store on Main Street and continues at various easily walkable locations nearby. There are printed tour guide brochures at the stops, and you can follow along on your phone using the digital codes at each exhibit.

As the weather heats up and you’re heading out to Town Center for an outdoor concert or dinner and drinks on your favorite restaurant patio, don’t forget to stroll through and pay tribute to these great athletes and individuals who have made their mark on Virginia sports history. And feel free to brag about your alma mater while you are there. 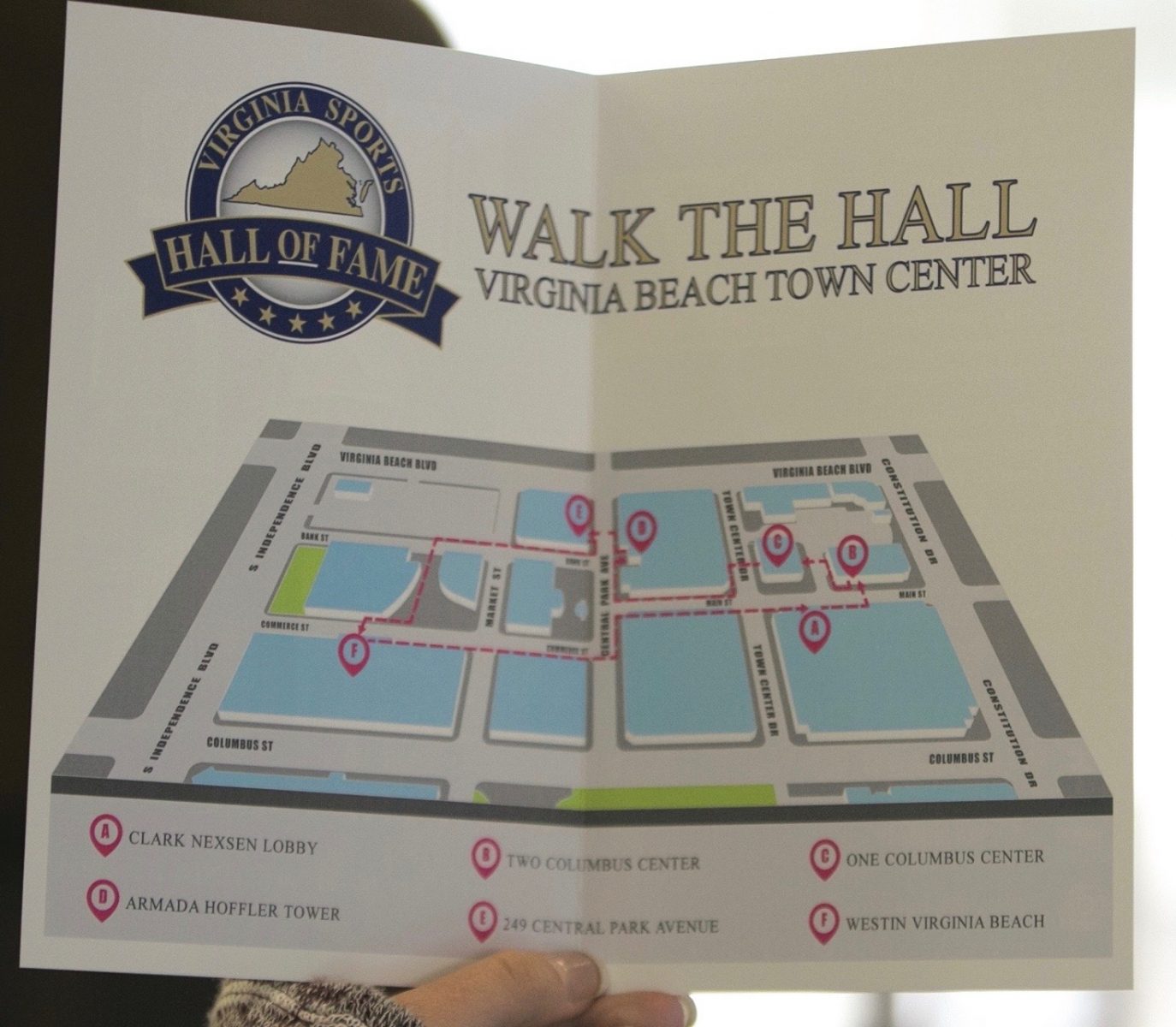