What’s in a Name: Amedeo’s Ristorante

The story behind the brand of Suffolk’s new upscale Italian restaurant is one of food, family and a certain world-famous peanut 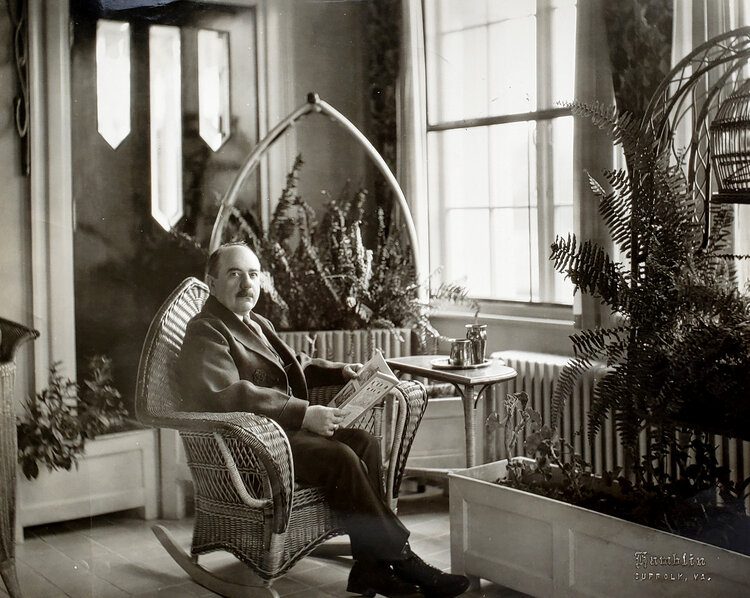 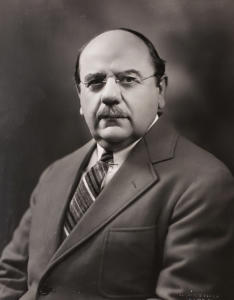 Amedeo Obici was 11 years old when he left his home in Oderzo, Italy. His father unexpectedly died when he was seven, and his mother was forced to sell the family business. His uncle in America suggested that Amedeo should come stay with him to find his fortune. Amedeo didn’t have a dollar in his pocket, and he spoke no English, but by the time he was 50 he was featured in Fortune Magazine as the $10 million man. That was in 1934. 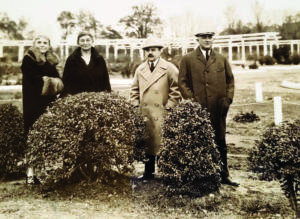 Perhaps you’ve heard of the hospital he built to honor the passing of his wife (there’s another Obici hospital in Oderzo, too). Or maybe you’ve heard of Planters Peanuts, the company he founded after humble beginnings as a fruit stand owner and peanut vendor in Pennsylvania, or its iconic Mr. Peanut mascot. Planters Peanuts moved its manufacturing operation to Suffolk in 1913 and Amedeo Obici and his wife Louise followed, relocating to their Bay Point Farms estate in 1920.

Now his legacy will live on in Amedeo’s Ristorante in Suffolk—a tribute to the man who loved good company and great food. In fact, some of the recipes used at the restaurant are actually family recipes brought over from Italy that were originally scribbled on scraps of paper and photocopied for prosperity.

The Whole Branzino is one menu item, for example. The pan-seared sea bass served with asparagus and roasted red pepper nage is a traditional dish that was frequently served at the Obici table in Orderzo. Diners can either carefully pick at the dish, or have the kitchen expertly debone it. 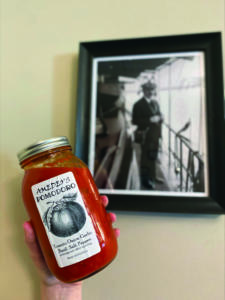 The Salmon Obici may not be a family recipe, but it does pay homage to Amedeo and the Travino region of Italy. Pan-seared salmon is topped with a Planters Peanut pesto, roasted green apples, golden raisins and asparagus. Even the Radicchio Chop offers a tip of the hat to Oderzo. Executive Chef Travis King created the vinaigrette for it from Prosecco, a sparkling white wine that originates in Italy.

As for the rest of the menu, the pastas and the pizza dough are made fresh daily at Amedeo’s Bakery, located right next door to the restaurant. Popular dishes include Linguini and Clams, Lasagna, Spaghetti and Meatballs, Spinach Ravioli, Bucatini Carbonara, Tagliatelle Bolognesi, Penne Alla Vodka, and Sausage and Peppers. Other dinner dishes include Veal or Chicken Parmigiano, Veal or Chicken Francese and Filetto Di Manzo Agliato.

Do yourself a favor and order a side of the Risotto Con Radicchio, too. Other side dishes include Grilled Asparagus, Wild Mushrooms in garlic, butter and herbs, and Spinach & Radicchio 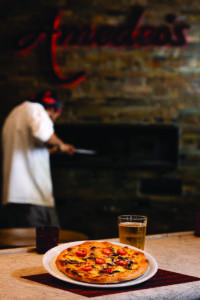 Then there’s the brick pizza oven. On a chilly afternoon or evening, you can sit at the well-stocked bar and bask in its warmth while waiting for your custom-made pie to be delivered in just a matter of minutes.

Walking around Amedeo’s, diners may notice a couple of things. For one, Mr. Obici loved to play bocci, and there are authentic bocci balls utilized in the decorative furnishings throughout the restaurant. Another thing keen eyes may observe is a plethora of greyhound sculptures. Amedeo was a huge animal lover. In his honor, for every greyhound cocktail (grapefruit juice and vodka) ordered at the restaurant, money is donated to a local greyhound rescue group.

For corporate meetings and special occasions, the Obici Room is a private dining area separated from the main portion of the restaurant. Photos on the walls were donated by the family and capture the essence of the restaurant’s namesake, including a portrait taken right around the time he arrived in America. Visitors can get a true sense of the larger-than-life Obici, who stood only about five feet tall but with a presence that could fill any room. 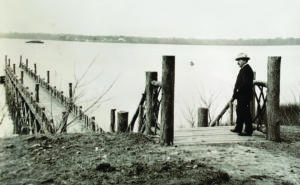 Dinner reservations are highly recommended for Amedeo’s, located in Bridgeport Norfolk Suffolk and open for lunch and dinner daily and take-out during normal business hours.