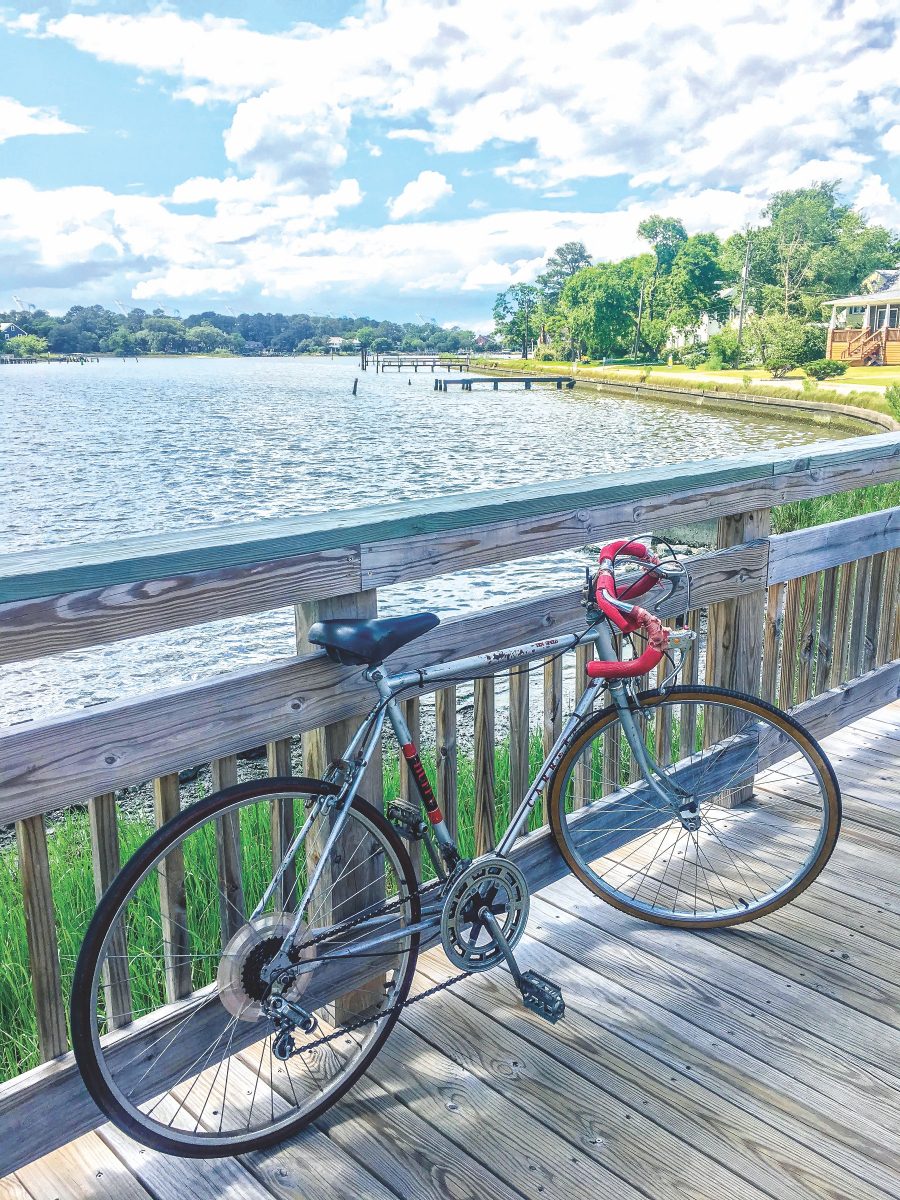 As spring arrives with blooming bouquets of flowers and bright rays of sunshine, clean and convenient, stylish and swift bikes make for a nice way to get outdoors and get around. Many Coastal Virginia cities are paving the way for cyclists to discover more with paths in their community and parks next to nature and wildlife. So whether you’re riding your bicycle, unicycle, tricycle or three seats in tandem, we’re rolling out our five top trails for bike riding.

This multi-use, unpaved bikeway meanders between Newport News Park’s 8,000 acres with shaded woodlands and wildflower meadows home to frolicking foxes and mischievous river otters. The Bikeway loop covers 5.3 miles, flanking the glistening Lee Hall Reservoir and George Washington’s headquarters in Colonial National Historical Park, the site of an encampment he and his soldiers set up during the American Revolutionary War. Ride underneath an awning of trees and make a day of it at the park with its recreational archery range (make sure to bring your own bow and arrows), disc golf course and even an aeromodel flying field for remote-controlling aviators.

Six miles of paved paths, sandy roads and planked boardwalk bridges on the Cape Henry Trail take you through First Landing State Park’s lush landscape bejeweled with natural treasures of sweeping dunes, marshy bogs and cypress swamps draped in Spanish moss. As you roll through its maritime forest fit for a ride on fat tires you may notice perched birds such as warblers and woodpeckers as well as slithering serpentine critters such as red-bellied water snakes and blue-tailed lizards. The trail also circles near the Broad Bay beachfront of The Narrows and segues out to the boardwalk and South Beach Trail at the Oceanfront for breezy beach cruising.

It’s backwoods biking on a highway emblematic of Americana. The Dismal Swamp Canal Trail in Chesapeake provides 8.3 miles of smooth peddling on its spacious paved road that once was part of Virginia State Route 17. The nearside canal, listed on the National Register of Historic Places, was a passage on the Underground Railroad as well as a channel for boats carrying lumber and trading goods on the Intracoastal Waterway. At the head of the tree-lined trail, the adored Ches A. Peake or “Chessie” wood-carved black bear statue greets guests, as black bears are seen at times in the swamp during the spring.

What could be considered the Tour de Norfolk, the Elizabeth River Trail was made with a love for the city, born out of urban renewal and community collaboration led by the Elizabeth River Trail Foundation. Its 10.5 miles marked by 11 sections take you through vignettes of the city, each seceding from another in a collage of neighborhoods, districts and landmarks, giving riders a look into each intricate nook and cranny of Norfolk. The trail along the Elizabeth River begins at Norfolk State University and the ballplayers’ field at Harbor Park before skirting the Waterside District, beyond the cobblestone streets of Freemason, down through brewers’ row in Chelsea, edging the freight yards of Norfolk Southern, across the youthful ODU campus to the sleepy neighborhoods of Larchmont-Edgewater. Learn more about new plans for enhancements to the Elizabeth River Trail here.

A 52-mile epic between the Colonial Capital of Williamsburg and Commonwealth Capital in Richmond, the Virginia Capital Trail along State Route 5 accentuates the natural wonders of the region with bucolic biking. Straddling the James River, the paved pathway passes from Colonial Williamsburg and the Colonial Parkway in James City County for a ride among the historic homes of Charles City County, including Sherwood Forest Plantation, residence of President John Tyler, and Berkeley Plantation, President William Henry Harrison’s abode. The trail takes an interlude beside several wildlife areas, Charles City Courthouse and Richmond National Battlefield Park before reaching the riverfront of the capital city.

Ready to take the ride further? The South Hampton Roads Trail is a 41-mile trail initiative currently being developed through the efforts of the Tidewater Bicycle Association and the Cities of Suffolk, Chesapeake, Portsmouth, Norfolk and Virginia Beach. Learn more here.