Christy Coleman is Reshaping Our Story

Photos courtesy of the Jamestown-Yorktown Foundation

As a seasoned historian, Christy Coleman knows the importance and power of museums, historical narratives, and inclusivity and doesn’t shy away from what some may consider challenging conversations.

“I’ve always been intrigued with how cultures and people interact at points of crisis,” Coleman explains. “I find the simple narratives, that we are taught or that we share, often lack the level of complexity that define all of this.”

A native of Coastal Virginia, Coleman says that she’s always enjoyed museums. “My parents were always taking us from one museum to another.”

As a teenager, Coleman had a summer job as a historical interpreter at Colonial Williamsburg. “I fell in love with it, but even then, I didn’t think it was something I wanted to do,” she says, laughing. “With each passing summer that I worked, I kept learning some pretty remarkable things. As fate would have it, I found it deeply satisfying that I could enjoy sort of this academic curiosity with the history and also meld that with creative.”

Fast forward years later, after earning her bachelor’s and master’s degrees from Hampton University and serving as president and CEO of the American Civil War Museum in Richmond for 12 years, she returned home for her new role as executive director of the Jamestown-Yorktown Foundation. Coleman is the first woman and person of color to lead the organization that runs both Jamestown Settlement and the American Revolution Museum at Yorktown, following the retirement of Philip G. Emerson on Dec. 31, 2019.

Coleman’s career has been the topic of much praise and conversation since her early days as Colonial Williamsburg’s director of public history, where she conceptualized and executed a reenactment of a slave auction on Duke of Gloucester Street, garnering national attention.

“We have this sort of trite expression of, ‘we need to learn our history, so we don’t repeat it,’” Coleman says. “Well, to me, if the narrative is incomplete, you aren’t going to learn anything, and you will continue to repeat them. If you aren’t able to grasp or consider the multi-layer approach.”

Completing historical narratives and creating change is something Coleman has strived to do and found success with. In 2018, she was featured as one of Time’s “31 People Who are Changing the South” for her work with the American Civil War Museum. 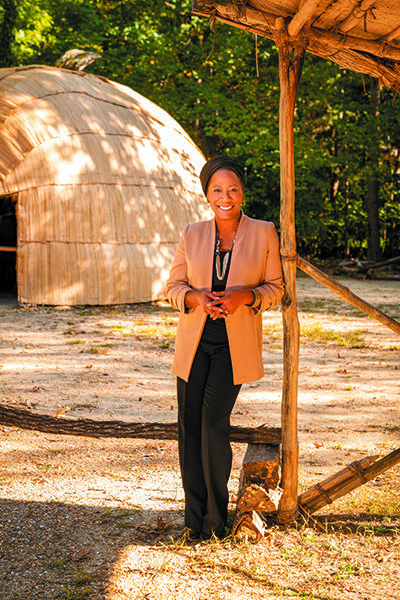 Coleman describes how the museum world functions on three levels when interacting with visitors: forensic, which include records, items archaeology and science; heritage, “a consensus of what a community deems important at any given moment in time. It isn’t necessarily going to be fully accurate,” she defines; and memory, which she describes as an individualized component.

Coleman asserts that her goal “is to make sure that the memories that people are creating when they come into our spaces are memories that are reinforced because they’ve come in contact with the forensic evidence itself.” She continues, “so they can reshape what that heritage narrative is, so it’s more informed by these deeper understandings.”

She says it’s a tough job, but one that will pay off in the long run. Just as she helped reshape the conversation surrounding the Civil War in Richmond, Coleman plans to do the same with the colonial period and revolutionary era in Jamestown and Yorktown.

She explains that she’s always been interested at this point in America’s history.

“I find it fascinating how Indigenous people align themselves politically. I’m still learning a lot about this. Of course, I am intrigued by the Enlightenment Period and how that comes to influence the lived experience. To even imagine a democratic republic, especially when so much inequity was existing in the midst of that. That paradox to me is deeply fascinating.”

Coleman acknowledges that history often skips the parts of colonialism that illustrate how the English tried to eradicate the Native people from their own land.

“We’ve created this heritage narrative that they were looking for a better life or coming for religious freedom and these other things that defy what they historical record tells us.”

She says that she’d like to continue to improve how the Jamestown-Yorktown Foundation engages with Native communities, explaining that there are 11 different Virginia tribes in our area.

“We have initiated a new program where we’re reaching out and really listening to their narrative and their oral history around colonialism,” Coleman shares.

She reminds her staff that they aren’t really teaching history at the living-history museums if all they’re doing his showing how people did things.

“If you’re not expressing why they did them or what the challenges were or the core reason of why we need to understand this historical time, then we are failing as an institution,” Coleman continues. “We have an opportunity to talk more about that.”