Two months after turning off Stove The Restaurant, Sydney Meers knew that retirement was the right call. Then came month three. Petting his three cockatoos and two cats, it hit him: “This is not fulfilling” (his rescues probably thought otherwise). So he did what he does whenever feeling frisky, he whipped out his sketch pad. An image that was part man-part ottoman fused onto a silver platter with a fish and hippie wild boar/pig emerged. The logo could mean only one thing: “Looks like I’m doing a restaurant!”

So, our area’s most original chef-owner-artist 86’d the emeritus and is 24/7-ing to build out Syd’s Fish Pig Café in Downtown 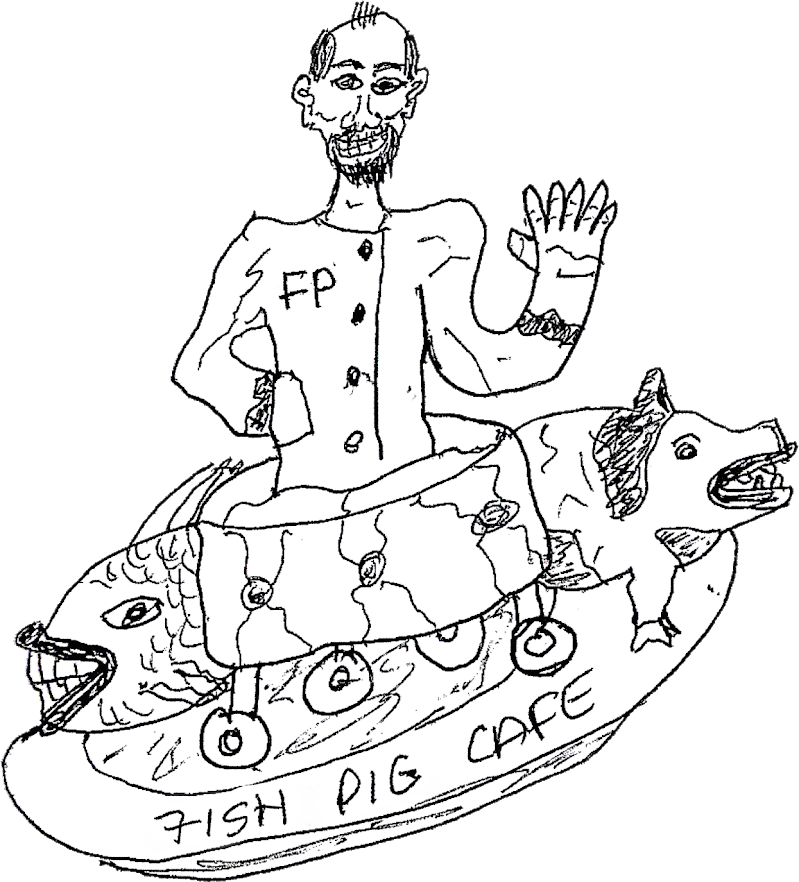 Norfolk’s Selden Market. Café in the title pays homage to his grandmother’s Mississippi-rooted Johnson’s Café and signals a more casual mien. “Still upscale,” he explains. “But relaxed.” He’ll do food of his vernacular: “really big” halibut, “silky” snapper and heirloom pig stuff (his cured sausage and pork belly). As ever, he’ll bake his own breads and desserts.

Already in place is an eight-seat cedar-topped bar whose contrasting base appears alligator-skinned through shou sugi ban, a Japanese charred-wood preservation technique. There will be an intimate 20-seat dining room, lounge with cushy velvet chairs and, the pièce de résistance, the Beyond-The-Algonquin-Round-Table, “for my writers, my poets, my know-its,” says the Dorothy Parker fan. Fitting, as his restaurants over three decades (TheDumbwaiter, Cowboy Syd’s, Stove), often felt like salons, drawing talent from near and far.

But no one is a bigger attraction than Meers who, belying his unbridled, mythic antics (remember the Doo Dah Parades?), is a pro. To wit, his former staff including Kim Hughes, Byron Barns, Cat Keller, Cat Gendell, Michael Bernard and Buddy Roundtree will rejoin him here.