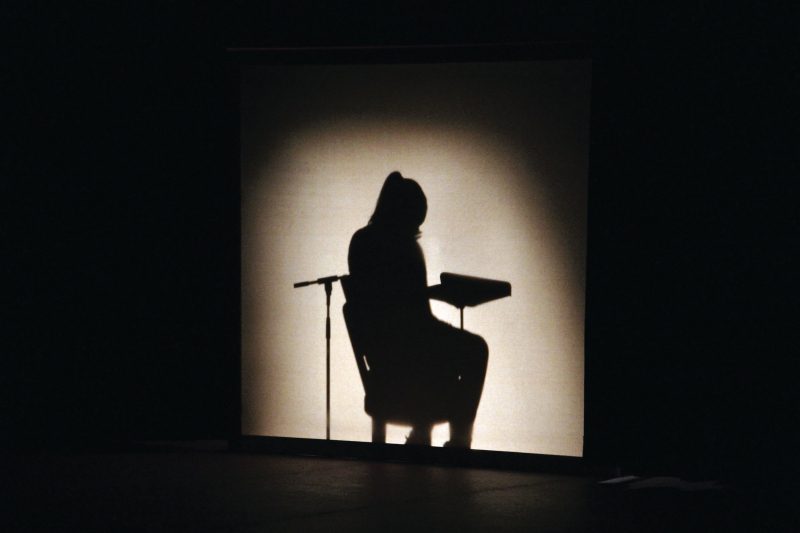 The Shadow Event gives an opportunity for anonymous survivors silhouetted behind
a screen to share their stories with audience members.

I’d prepared for my visit to the nonprofit Fear 2 Freedom. I’d done background research on the organization and understood their mission of restoring hope and dignity to survivors of sexual assault. I knew about the work they do to educate college students on sexual violence. I’d seen pictures of the Aftercare Kits they assemble for victims. I’d jotted interview questions for the chief operating officer. I was ready.

But I wasn’t prepared to walk into a storage room and see a bin of pastel-colored, floral-patterned underpants, individually tied with gold bands, to be placed in Aftercare Kits for little girls who are victims of sexual assault.

“Since 2011, we have given out over 20,000 Aftercare Kits to victims of sexual assault,” shares Muriel Millar, chief operating officer for Fear 2 Freedom. Of those, approximately 6,300 kits were for children.

In her Newport News office, Millar reviews the contents of a child’s Aftercare Kit with me, explaining why items as simple as a T-shirt, sweatpants and underwear are essential. “Some of the people who get this might end up in foster care,” she says. And since their clothing is being kept for evidence, this may be the only outfit that child owns in this moment. Activity books with crayons are helpful in keeping the child occupied during the exam, which could take four to six hours. 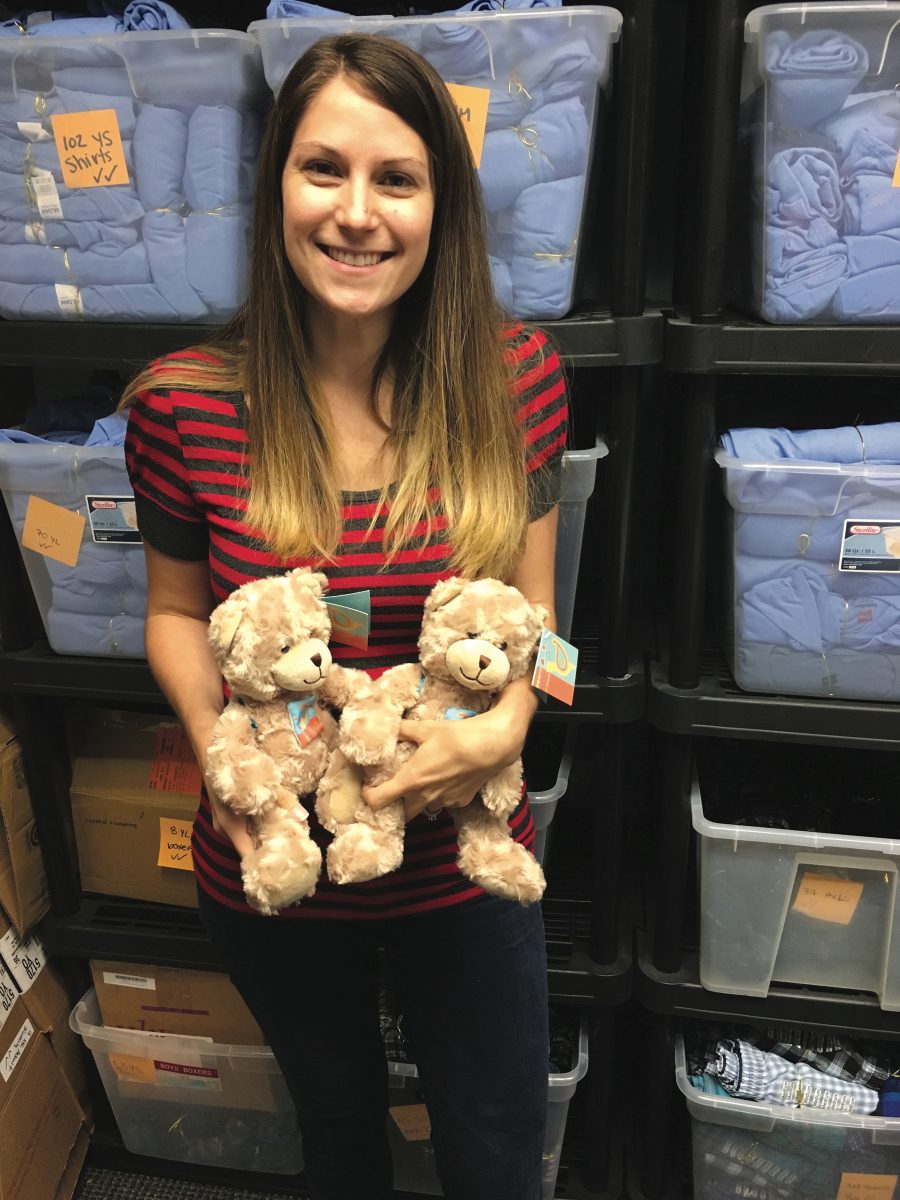 Freedom Bears are given to child victims of sexual assault and used as a counseling
tool. 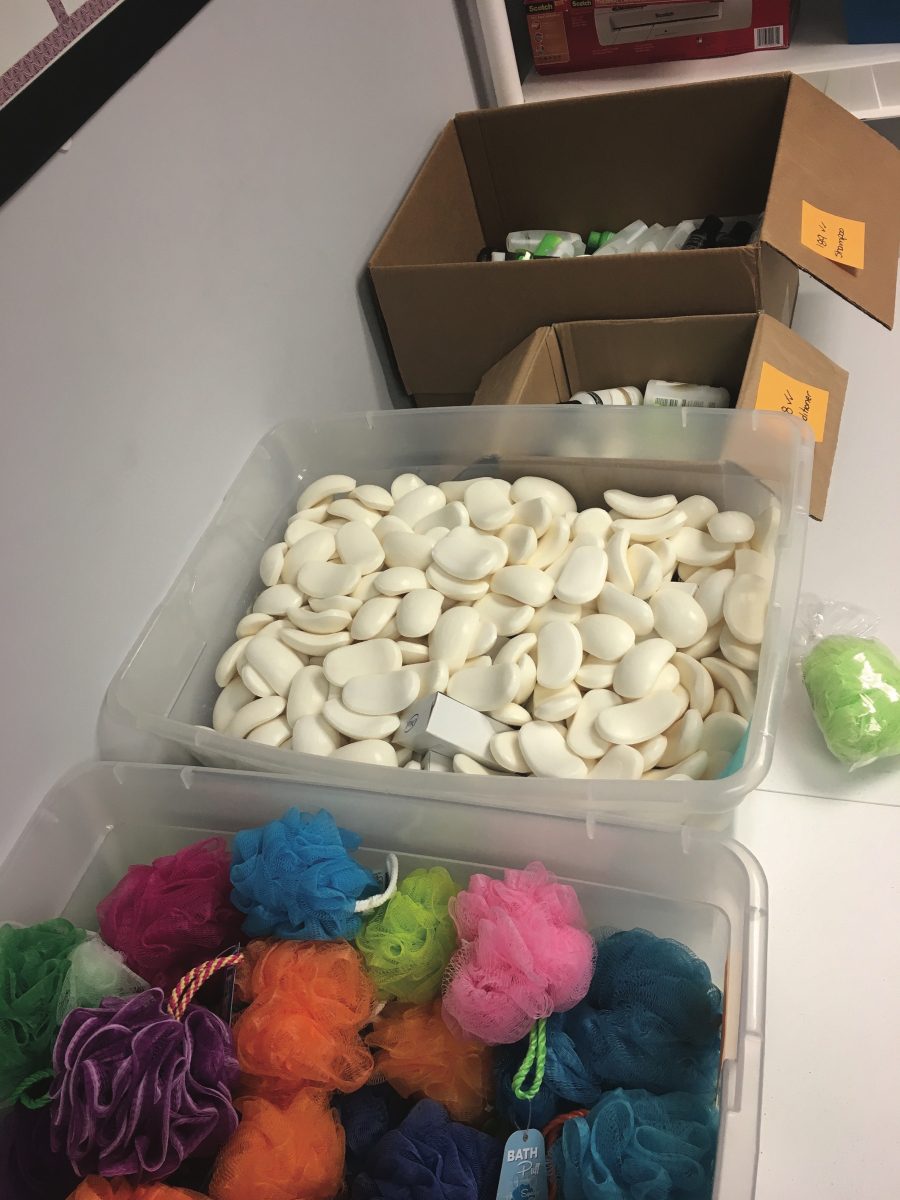 Volunteers create an assembly line to package items like loofahs, soap, shampoo
and conditioner into bags to be placed in Aftercare Kits. 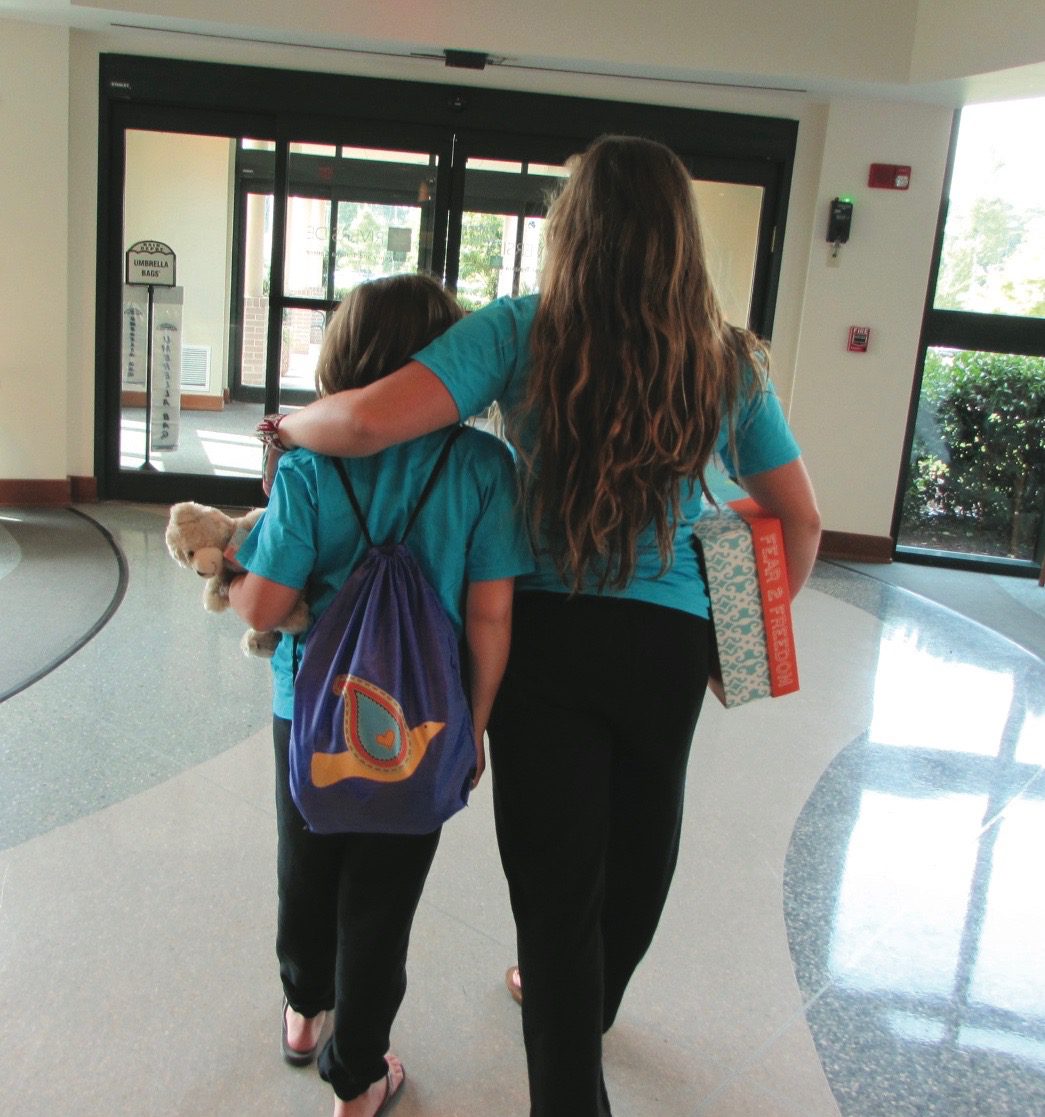 Aftercare Kits containing sweatpants and a T-shirt are given to victims of sexual
assault who may otherwise leave the hospital in paper scrubs during a moment of
greatest trauma.

Lastly, Millar shows me a Freedom Bear, which is used as a counseling tool. Freedom Bear comes with a backpack (it’s explained to kids that just as they are getting a backpack—an Aftercare Kit—Freedom Bear has its own backpack), and inside the backpack are 10 small sheets of paper. Kids are instructed to write what they’re afraid of on the pieces of paper, whether it’s the assailant’s name or being left home in the dark. On the bear’s heart is a small pocket, and kids can put the paper inside the hole, close it up and let the bear carry that burden for them. “As you get stronger, take that piece of paper out and put it in water. And when you put it in water, it dissolves,” Millar explains. “To signify that you can overcome your fear and move on.”

Millar shares with me a story of a mentally challenged girl who arrived at a hospital after being sexually assaulted. “She was distraught because they had to do this exam, and she doesn’t realize what’s going on. They brought out the kit, and they gave it to her, and she grabbed the bear and just held onto it and calmed down, and they were able to do the exam.” In this moment I realize that the Aftercare Kits are far more than a kind gesture—they’re often vital in helping forensic nurses gather information that could be used as evidence.

Supplies for Aftercare Kits are organized by size and then loaded in a U-haul and driven to college campuses for students to assemble the actual kits. 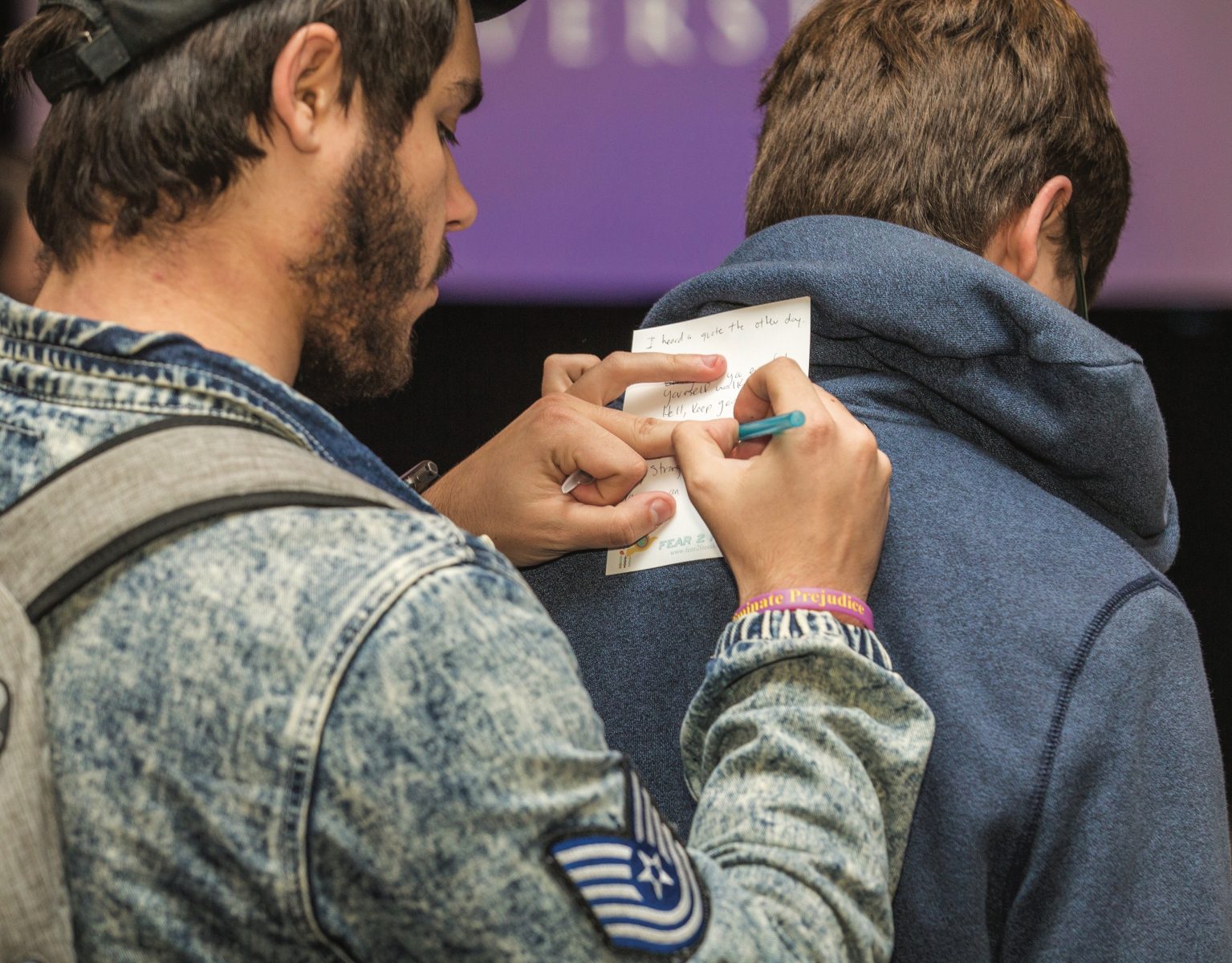 At Hour 2 Empower events, college students write a note of encouragement to a
sexual assault survivor to be placed in an Aftercare Kit.

“We go to the colleges and universities, and we educate college students about sexual assault awareness. We talk about what consent means, what bystander intervention is, the school’s regulations,” Millar explains. “And then at the end of the program we ask the students to put the kits together.” One opportunity that gets students emotionally invested is hand writing a positive note to a sexual assault survivor to be placed in the kit. “It makes them think, this could be someone I know who’s getting this kit.”

It’s not uncommon for students to come up to Fear 2 Freedom staff at an event to share their personal stories of being sexually assaulted. Millar remembers a young man at Liberty University who volunteered to help set up before an event. “After he finished doing all the tasks, he came up and he said, ‘I really appreciate you putting this program together. I was sexually assaulted as a child, and it was a family friend, so I couldn’t tell my parents.’ It kept eating away at him, and he got to the point where he was very depressed, suicidal. His parents walked in on him when he was trying to kill himself, and so at that point, he told them, and he tried counseling—and he was still in counseling. But he almost committed suicide because of it.”

“I personally did not know how much men are also affected by this,” shares Jessica Todaro, a CNU student who volunteers with Fear 2 Freedom. “I think it’s so focused on women, which is not to demean either side, but I don’t think men are talked about as much.” Todaro says she became involved in the organization because Rosemary Trible’s story stood out to her. “It’s an issue that’s very close at heart to me, and because it’s so close to campus as well, I felt like it was an easy way to pour in my time and volunteer in my community.”

She’s right, it was easy spending time here today at the nonprofit’s welcoming headquarters, helping to count individual items that will go in Aftercare Kits. It’s when you start thinking of each individual woman, man and child receiving these items that makes Fear 2 Freedom’s mission feel nearly unbearable but all the more essential, especially when looking at statistics that can be harrowing.

When Fear 2 Freedom was founded, the number “2” in the name represented the fact that every two minutes, someone is sexually assaulted in the United States. Those statistics have been updated to every 90 seconds. “Our hopes are the reason the number of assaults are increasing is because people are now more willing to report it,” Millar says.

There’s been an overall shift in the national conversation regarding sexual assault. “Many factors have contributed; cultural changes, societal changes and technological changes that allow for more stories and more voices to be heard,” Millar says. “However, the greatest change occurred when we as a society stopped blaming victims, looked in the collective mirror and asked, ‘How can we stop this?’”