Inside and Outside at Waterside

The question on many minds for years, “What are they doing to do with Waterside?” has since been changed to, “When can we do something at Waterside?” and the answer will soon be, “Right now.”

The long-awaited, much-anticipated Waterside District is scheduled to open officially on May 4, with Grand Opening celebrations planned for May 11–14. We take a sneak peek inside (and outside, too) just weeks before the project is scheduled for completion to see what enticing eats, drinks, musical performances and family-friendly activities we can look forward to enjoying on the Elizabeth River this summer.

“We are so excited to bring something very special and memorable to the Hampton Roads region,” says Glenn Sutch, president of Waterside district. “The new Waterside District offers a complete indoor/outdoor culinary and entertainment experience that visitors and the community will love. Every element of the space is designed to engage the senses and to showcase the natural beauty of this unique waterfront setting.”

Our tour is led by Ha Koehler, managing director of Free Agents Marketing (the group that handles advertising, brand identity, digital, events, PR and strategy for Waterside). We carefully follow her past a crew of hardhat-wearing workers through Waterside’s main entrance. The vibe is open and airy, much in part to the skylight (which has always been there but not seen from the bottom floor) and the garage doors throughout, which will truly allow the outside in. It’s also got a slightly industrial feel, with various textures of wood, brick, tile and glass throughout. The project’s design was envisioned by internationally acclaimed designer Jeffrey Beers, whose creative vision led each space to have its own distinct look and style while flowing together into one cohesive district. 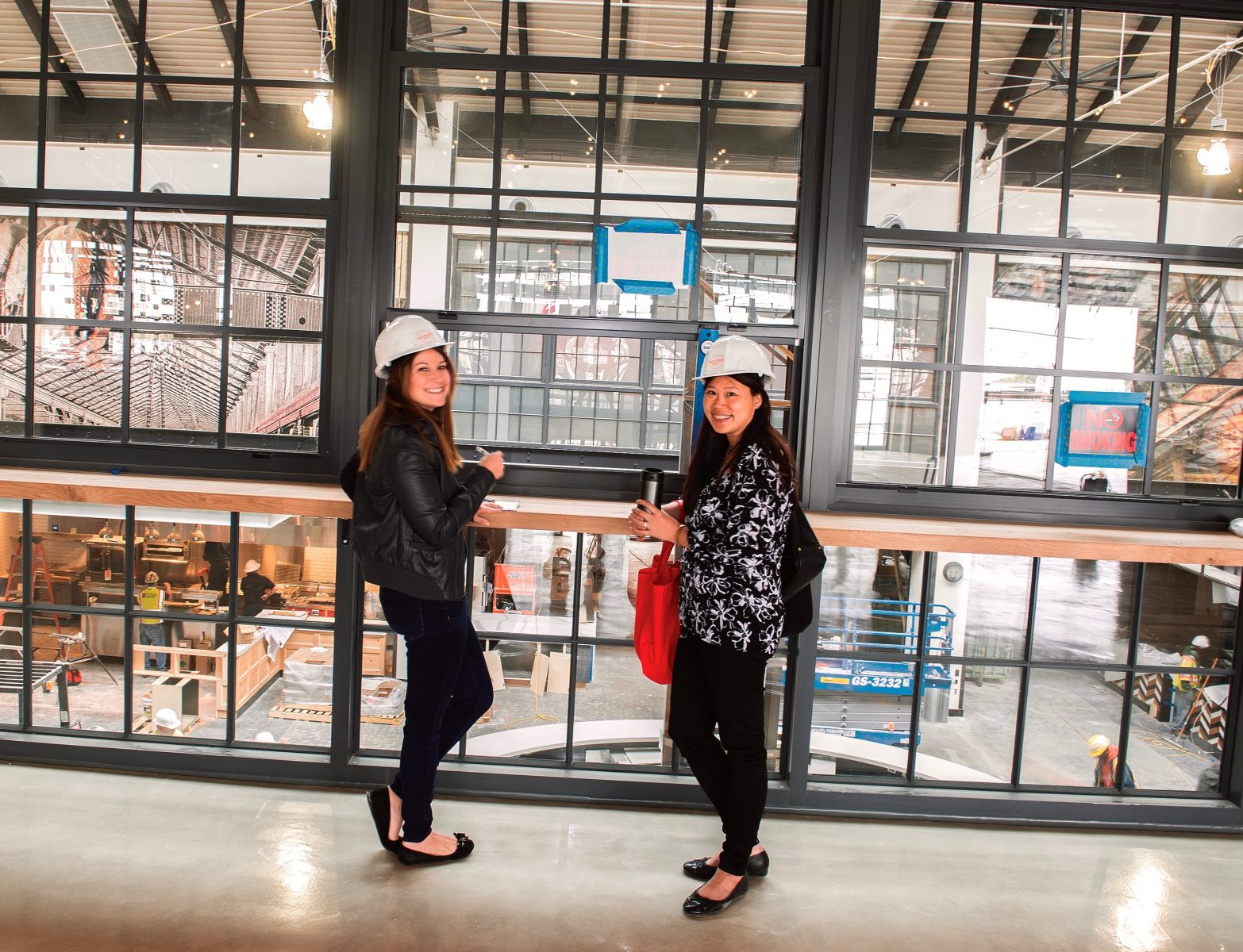 Angela Blue and Ha Koehler overlooking The Market from the second level.

We marvel around us as we stand in what’s called The Market, the heart of Waterside which opens up to several different eateries, all with open kitchens. “People have different tastes,” Koehler notes. “So everybody can come to one place, and everybody can get what they want to eat.” In this way, it’s reminiscent of a mall food court (with more atmosphere, of course)—but this spot has something that a food court does not: Rocky Mountain Grill, a sit-down restaurant that serves food items from all of the menus at The Market. This way, if a group of friends or a family came in, and each person wanted something different, a server would take their order and bring food from all the different restaurants, giving guests the opportunity to sit and relax versus standing in separate lines.

In the center of The Market is the large Starr Hill Market Bar, which will feature over 48 craft beer options on tap. On the far wall is a massive, 20-foot TV, which will serve as a screen for family movie nights, as well as for watching sports.

To our right is The Verve, a spot to get your morning fix of coffee or tea from Norfolk Coffee and Tea Co. or sweets from Carolina Cupcakery. This café will open each morning at 6 a.m. while the rest of Waterside District will open at 11 a.m.

Then there’s The Local, which will feature appetizers, soups and sandwiches from Virginia staples like Pino’s Meatballs, Martin’s Soulfood, Big Al’s Wings and Morty’s Deli. 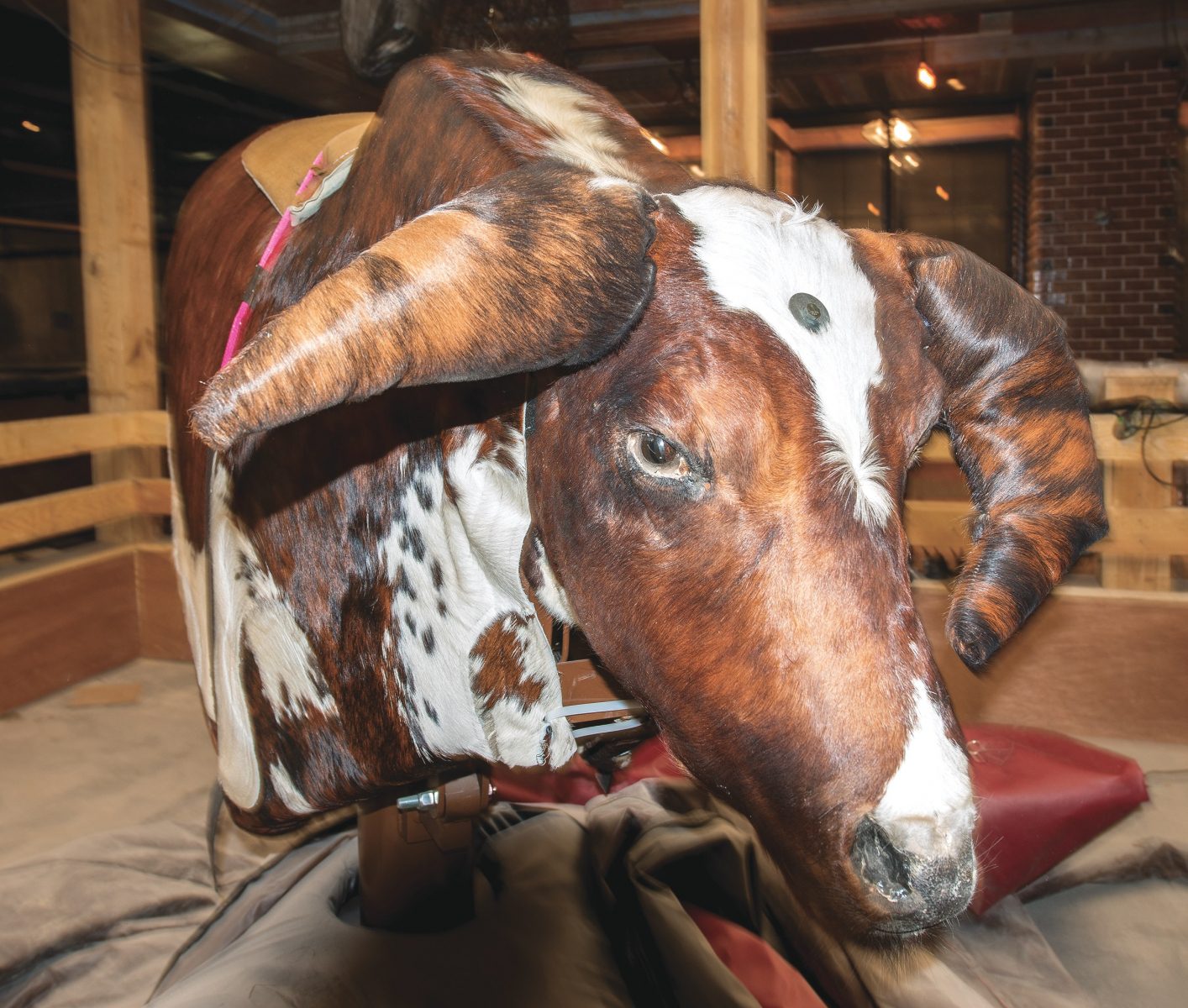 A contest will determine the name of the authentic-looking bull at PBR.

Guy Fieri’s Smokehouse fits naturally beside PBR (Professional Bull Riding), where we get an exclusive sneak peek at the bull, whose name will be determined after a contest. Wooden floors and walls lend a rustic feel, topped off with barbed wire globe lighting. A stage is being prepped for live music, and a floor for line dancing is nearly complete.

Inside Blue Moon Taphouse, patrons will be able to pair menu items with beers. Every Blue Moon flavor will be available, and in addition to the year-round staples, they’ll be brewing seasonal and limited edition flavors as well. A small stage will host acoustic acts, and there will also be a $50,000 golf simulator so you can play a full round of golf on various courses. And to give a local spin, there’s a mural on the upper wall here painted by ceramic artist and ODU Professor Richard Nickel. Stepping outside from Blue Moon Taphouse, we get to the Blue Moon Orange Crush Bar, where they’ll serve signature orange crushes.

Also outside, The Yard space will feature fire pits, lounge furniture, cornhole, Bocce ball, giant Jenga and giant Connect Four. Once a week, there will be a Yappy Hour where pet owners can come out and socialize with their four-legged friends. “That’s really the concept of Waterside,” Koehler says. “We want people to come and feel like it’s an extension of their homes where they’re comfortable just hanging out. It’s not like a restaurant where they’re just trying to turn the tables as quickly as they can.”

Next, we journey upstairs where Stripers will serve casual, fresh seafood and a made-from-scratch menu, similar to the original Stripers Bar & Grill in Manteo. Diners here will enjoy lunch, dinner and Sunday brunch, as well as 30 beers on tap.

Also upstairs is the Harbor Club, which will feature small plates and signature cocktails, as well as a Sunday brunch. The interior here is bright and stylish, with light wood throughout and twinkle bulbs dangling from the ceiling. An outdoor veranda will hold lounge-style seating and unprecedented views. Harbor Club will be open Thursdays­–Sundays.

There are still several spaces that are open for future developments—so stay tuned. 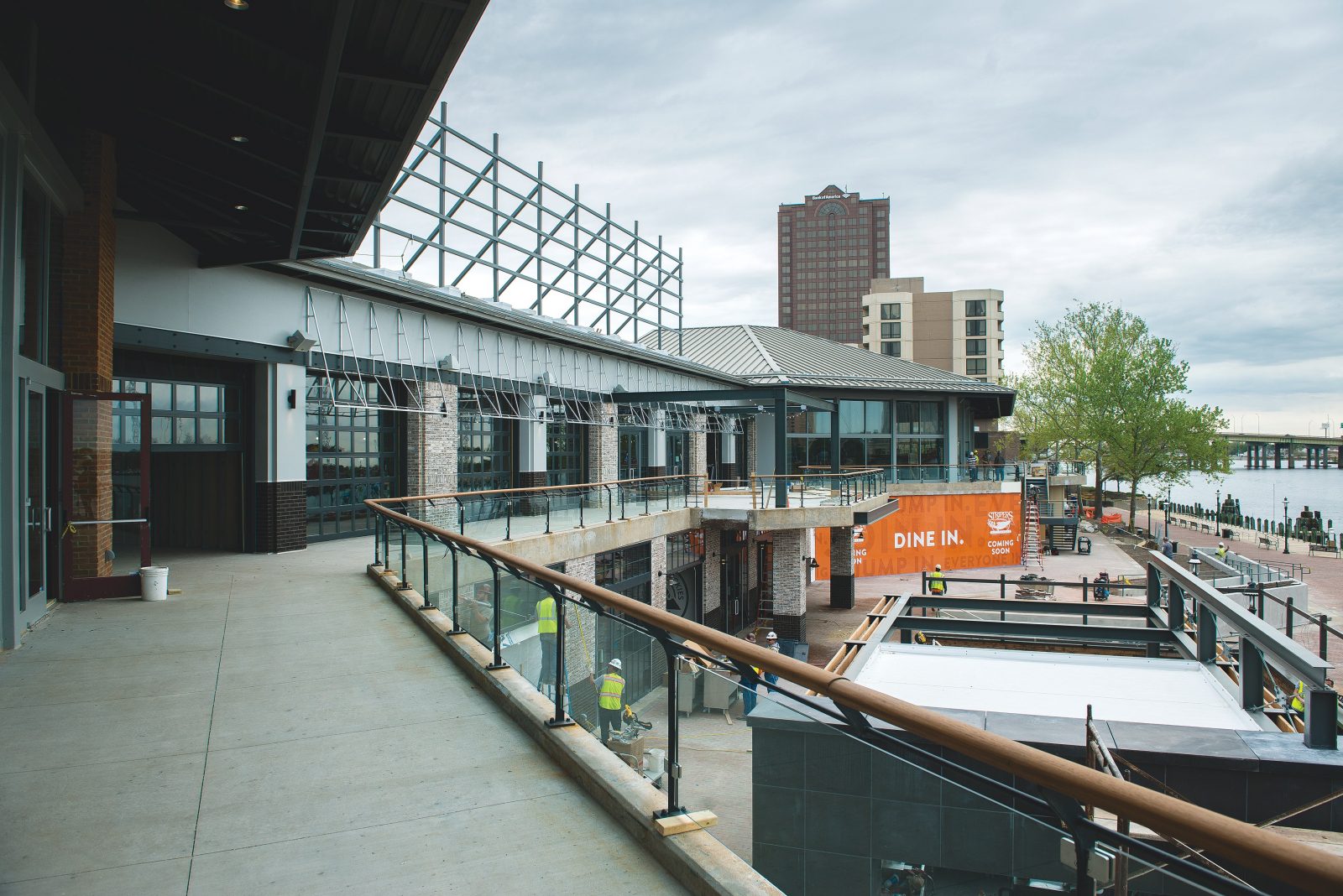 For anyone concerned that the new Waterside will run into similar issues as the old Waterside, Koehler assures that things are different now. “It was fragmented before because of the separate tenants, and here it’s a very open concept,” she explains. “It’s going to be managed 24/7, and every day there’s going to be something going on.”

Before the official opening, Waterside will host private events that will benefit various nonprofits. Once they open, they’ll have plenty more events, from “streetmosphere” aspects like jugglers, performers, aerialists and face painters geared to family activities, to partnering with the Virginia Arts Festival on some of their events events, to partnering with the YMCA for the community to participate in exercise sessions.

"It's really that whole experience and connecting to the community," Koehler says. "Arts, entertainment–all of that is going to be showcased here."

For more initial summer events at Waterside, visit here. Stay up-to-date with events all year round by visiting the Waterside District website.