You might say the art of local painter Gerome Meminger encompasses two sides. One is his fine arts side, where he’ll use small brushes to incorporate intricate detail to his pieces, sometimes spending weeks completing a single painting inside his Art By Gerome Galleria in Downtown Hampton.

The other side is his performance painting, where Meminger paints alongside a musician, possessing the soul of music on canvas as he whisks abstract brushstrokes alongside the rhythm of music, trading sound for color and note for stroke. When the spotlight shines on him and the music begins, he can complete an entire painting in the duration of a song.

A retired military veteran and Hampton resident, Meminger began composing his paintings to music at his studio on summer Saturdays when the city block party would happen in front of the gallery. One day he decided to bring his easel out to the street and paint on the spot. “I would go along with every beat,” he recalls. “My brushes would mimic the sound of the music.” These days he paints at many local gatherings and nonprofit events as well, allowing his art to be auctioned off to raise funds for organizations. He paints to any style of music, including jazz, rock, country, western and folk. “My favorite is jazz,” he shares. “It’s like abstract. It doesn’t have verses. It doesn’t have words. It has imagination.” 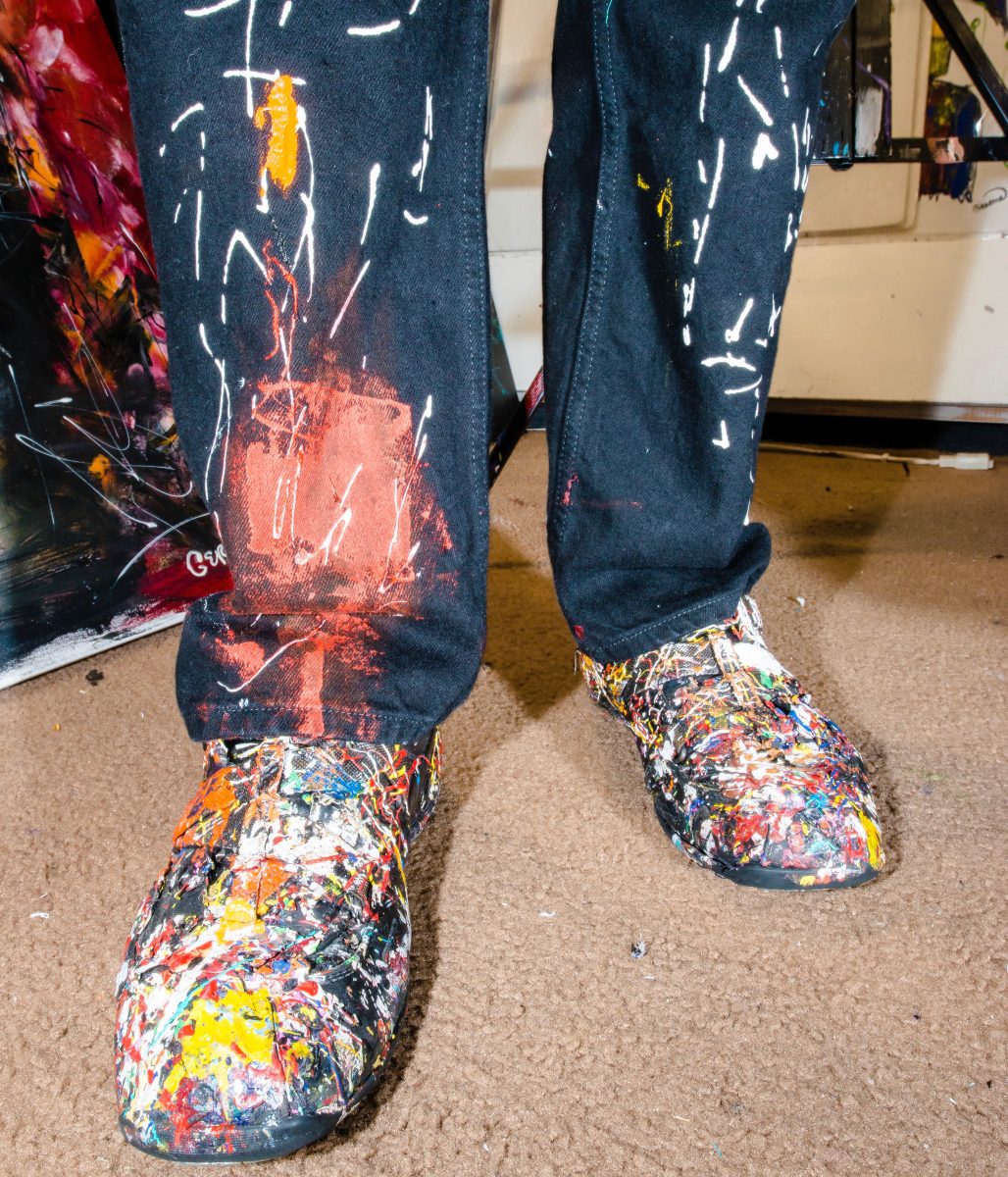 Along with his expressive paintings, Meminger has authored two children’s books. In The Lonely Little Blue Book, a book is saddened that no one will check it out at the library because it only has one story to tell. “I wanted to write something that would inspire children to pick up some classics, dust them off and read some of those really good books in their library,” he explains. The premise continues in The Adventures of the Little Blue Book—Saving Pennies, Nickels and Dollars, as Gerome shows young readers the importance of saving half of what they earn. “It teaches family values; each book teaches life lessons to kids.”

As he draws on influences of music in an abstract style, Meminger’s creativity knows no bounds, a talent he attributes to his multi-colored, paint-speckled shoes. “I call them my magic shoes,” he says. “Once I put them on, I feel that I can paint anything.”

Make sure to save the date for Hungry Jazz on Canvas—The Gerome Project. On August 5, Meminger will paint abstracts while eight jazz musicians tell stories with their instruments at Ferguson Center for the Arts.