Virginia Beach Chef Advances to Top 7 Round of “MasterChef”

Virginia Beach’s Eboni Henry has earned a spot amongst the top seven chefs on the eighth season of Fox’s hit television series, “MasterChef.” The winner of “MasterChef” is rewarded with the official title of MasterChef, a trophy, a spot on the “MasterChef” cruise and a grand prize of $250,000. Henry will continue her battle to the top in the newest episode, “Chopsticks & Pasta/Pop-up Restaurant,” which airs on Sept. 6 at 8 p.m.

Aside from her new identity as a reality television star, Henry is also a military spouse, mother of four, restaurant general manager and part-time chef for her catering company, TwerkingChef LLC, and was an addiction counselor while she lived in Chicago. Amidst the chaos of working two jobs and raising a family, Henry still finds time to indulge in her passion for cooking. She shared with us how her family and array of life experiences have influenced her culinary style.

According to your four children, what’s the best meal you cook?

How has living in areas such as a Guam and all over the continental United States influenced your culinary style?

EH: I’m open to all flavors and cultures. Living all over the place has given me the opportunity to engage and try all kinds of things I would have never been exposed to [while] just living in Chicago. I taste and smell everything and can break down every spice and ingredient to give myself a detailed textbook on exactly what was in it and how I’m supposed to cook it.

EH: I would start my food trucks, naming them “Not Your Average Food Truck.” Winning "MasterChef" would give me the funds I need to get everything started.

Have you participated in cooking or baking competitions before?

EH: Not at all, but [I] am hoping to do more now, as well as charity events. 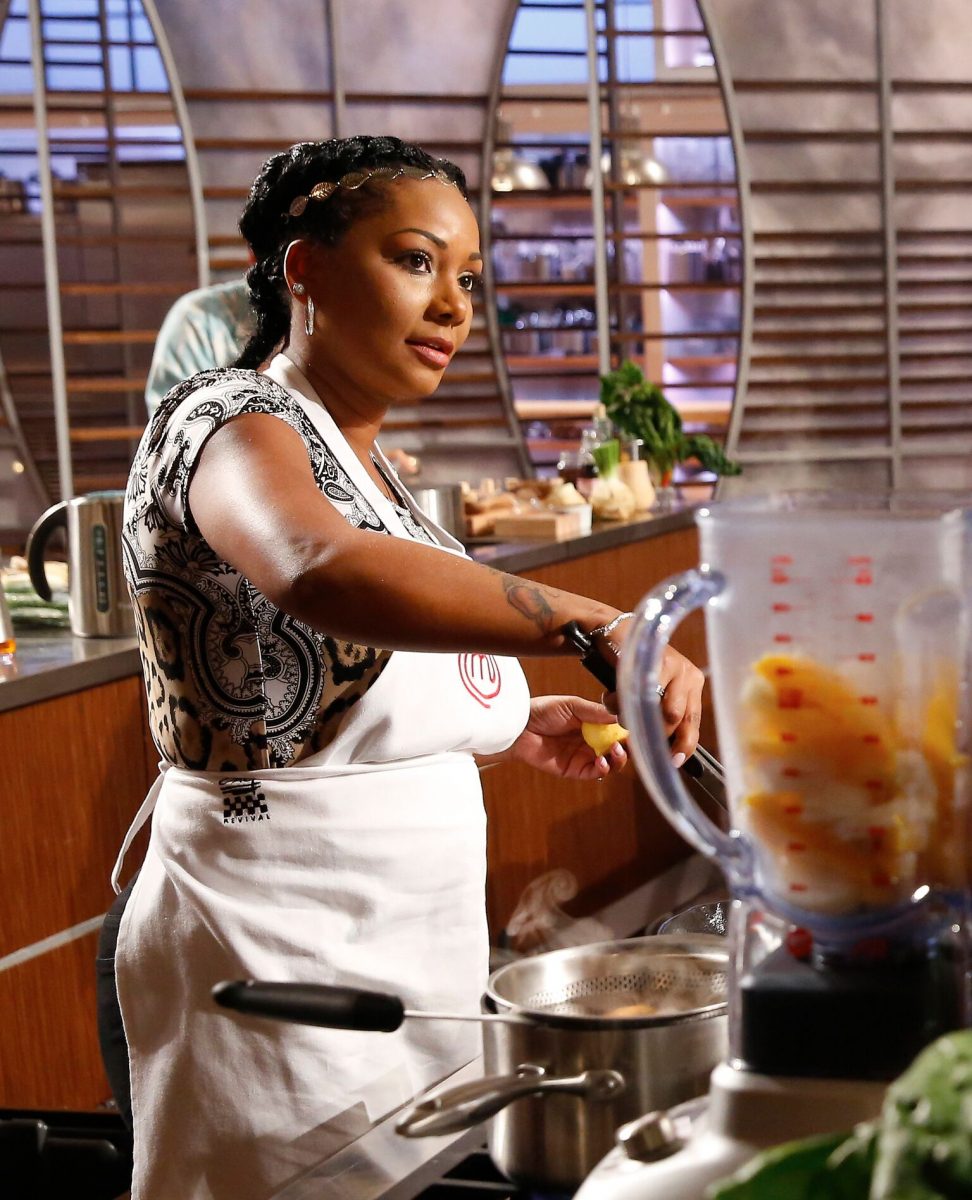 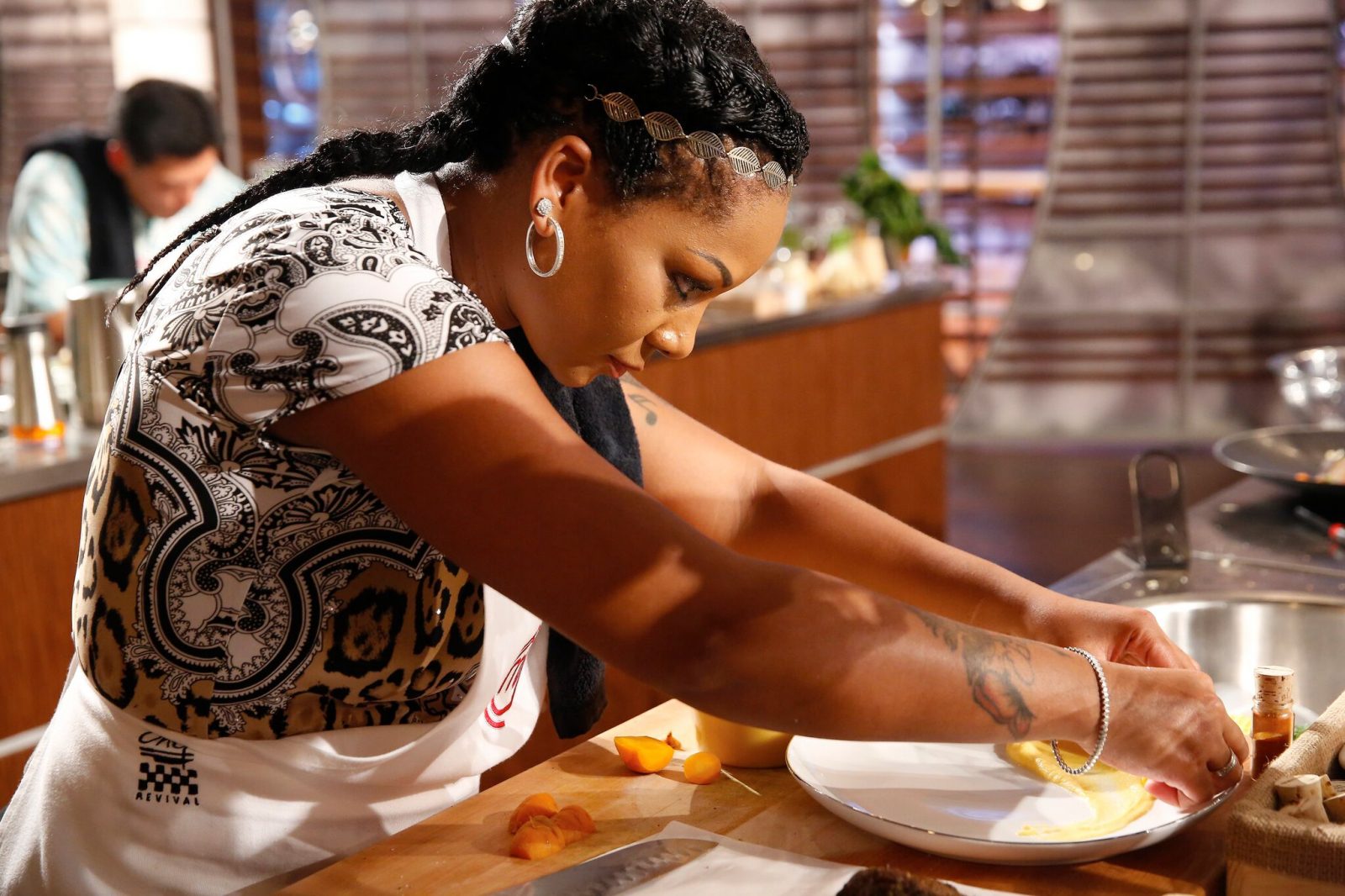 In a few words, how would you describe your experience on "MasterChef" thus far?

EH: Hard, yet very inspiring. It has given me the tools and knowledge to become a very successful chef. At this point in the competition, I’m no longer a home cook. I’m a second-year culinary student soon to graduate.

Has being on the show improved your art of cooking?

EH: Yes. My plating has gone to a level I didn’t even know was in me.

Which fellow contestants inspire you the most? Why?

EH: Cate because she is a pretty girl like me, yet she likes to hunt and kill stuff, which I refuse to do! Jason because he plates like he has been a chef for 20-plus years. Also Dino because he is weird like me and thinks outside the box. Not to mention, he had a hard childhood like I did, so I think these things inspire the way he puts his meals together.

Who inspired your culinary career?

EH: My older sister, Rheanna Johnson, [who] always said I was the best cook in the family.

Aside from Eboni the chef and Eboni the mother of four and Navy wife, what is something else you want people to know about you?

EH: Well, truth is, I love R&B and Hip-Hop music and dance around the house with my kids and husband, singing all the old favorites with my broom as if it’s my microphone. I also grow veggies in earth boxes and refurbish old furniture.