Virginia is for Park Lovers 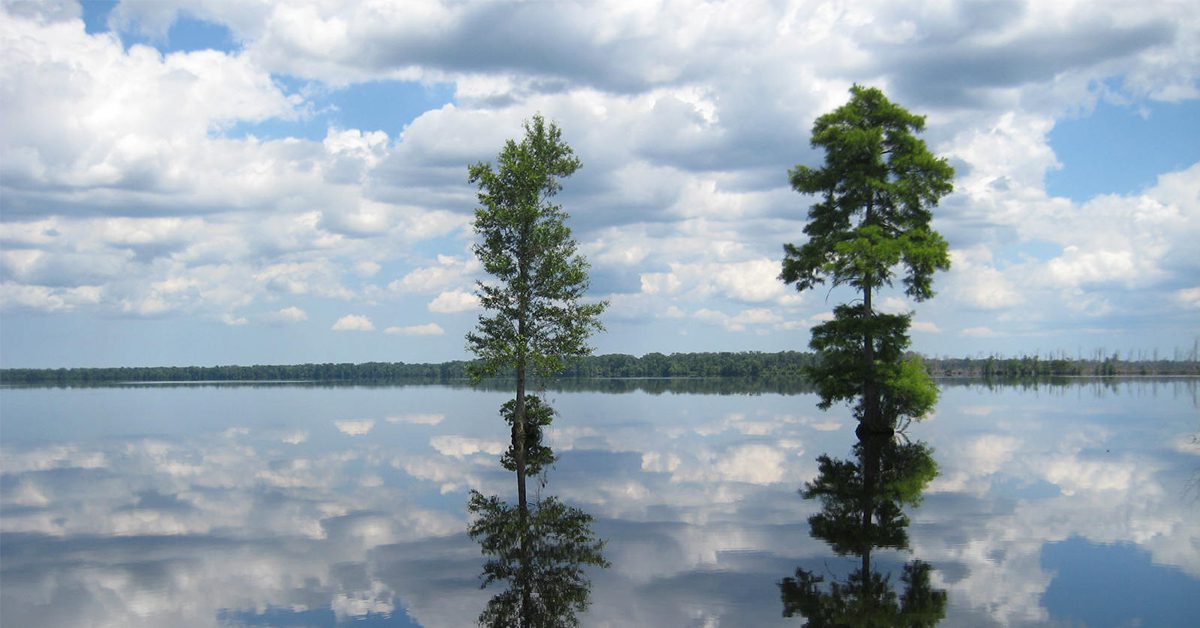 A narrow path ascends the banks of the nearby Broad Bay—the deep blue waters reflecting colored ripples from the rustling leaves of towering trees. The trail is heavily trodden, riddled with foliage and sand, and it is quiet, save the occasional crescendo of songbirds or quick staccato of a woodpecker’s beak. When traversing the grounds of First Landing State Park, its serenity captures you, offering momentary reprieve from the industrious world that lies just beyond the park’s boundaries.

The nearly 3,000 acres spanning lengths of Shore Drive and Atlantic Avenue are not only rich in trails and water outlets but in American History as well. Its name, First Landing, pays homage to the 1607 arrival of English settlers to the New World. Captain Christopher Newport landed a fleet of three ships—the Susan Constant, the Godspeed and the Discovery—on the neighboring shores of Cape Henry. Along with 100 of his passengers, he explored the forests, waterways and shorelines of what now comprise First Landing State Park and the Virginia Beach Oceanfront. Just as the park served as a refuge for colonists, it exists today as a sanctuary for nature lovers—a mainstay for hikers, bikers and runners, as well as boaters and beachgoers.

Other state parks throughout the region boast similar histories, as well as top-of-the-line amenities for outdoorsy types. On the Eastern Shore, visit one of the nation’s top 15 hawk observatories at Kiptopeke State Park. History buffs can marvel at the 1,000-year-old settlement that straddles the Virginia-North Carolina border at False Cape State Park, or visit even older, Paleo-Indian-era activity areas on the Peninsula at York River State Park. Ever imagined swimming in an Olympic-size pool on a 400-year-old plantation? It’s possible at Surry’s Chippokes Plantation. As settlers once did—but perhaps with a few more creature comforts—explore all that our outdoor spaces have to offer.

Hidden History: The infamous Blackbeard is rumored to have navigated Coastal Virginia waters to evade attacks by the British Navy. He preferred hiding in The Narrows and supposedly buried his treasure beneath its sandy shores.

Hidden History: Formerly known as the Wash Woods community, False Cape was home to nearly 300 inhabitants in the early 20th century. Hundred-year-old relics such as a graveyard and church steeple remain on the state park grounds and can be visited during guided tours.

Fun Fact: The name Kiptopeke pays homage to the younger brother of King of the Accawmack Indians and translates roughly to “Big Water.”

Hidden History: In 1948, the U.S. Maritime Commission erected 24 concrete ships off the coast of Kiptopeke Beach to protect the former Chesapeake Bay Ferry Terminal from stormy waters. Each vessel bore the name of a pioneer in the concrete industry. Today, nine ships remain in the Concrete Fleet and serve as breakwater for the pier, beach and surrounding wildlife.

Hidden History: York River State Park and the surrounding town of Croaker were known in the 17th and 18th centuries as Taskinas Plantation. The plantation was home to a public tobacco warehouse used by local farmers to store their crops. Recent archaeological digs have revealed slave quarters, workshops, forts and other colonial-era artifacts.

Fun Fact: Chippokes Plantation has remained a fully operational farm for over 400 years, asserting the grounds as one of the oldest continuously managed plantations in the nation.

Hidden History: In 1767, British Loyalist Lucy Ludwell Paradise inherited the sizeable Surry estate from her late father Phillip Ludwell III. Her husband John Paradise refused to move Lucy and their two children to the New World however, leading to the repossession of the property by the Commonwealth of Virginia. She sought counsel from close friend Thomas Jefferson who helped her reclaim ownership of Chippokes Plantation in 1787.

Fun Fact: Despite its name, the Great Dismal Swamp is not a swamp at all, rather a site that experiences as a significant upwelling of groundwater. While swamps trap water, the groundwater that fills the Great Dismal area flows outward to a number of local waterways including Deep Creek and the Elizabeth River.

Hidden History: The formation of the refuge’s Lake Drummond is largely unknown. It is one of only two natural freshwater lakes in the state and is believed to have been created during the last shift of the Contiental Shelf. Other beliefs sugget the lake resulted from a thousands-year-old underground peat burn.

Mount Trashmore Park is a Virginia Beach icon. It evokes nostalgia for playdates on the jungle gym, sugary wafts of late-night Summer Carnival treats and chilly Turkey Trot mornings. Norfolk’s urban Town Point Park elicits a similar sentimentality for holiday parades and music festivals along the Elizabeth River. Recollections of bird watching excursions and disc golf tournaments are wound in the 7,500 acres of Newport News Park, one of the largest, amenity-rich municipal parks on the East Coast. These city parks are clearly more than green spaces, but memory keepers and safe havens for their visitors.

Scattered between the more prominent city parks like Ocean View Beach Park and Chesapeake City Park, home of the annual Chesapeake Jubilee, are smaller, yet equally inviting outdoor spaces. Virginia Beach’s Red Wing Park is a unique blend of sportsplex and garden center boasting pickleball, tennis, basketball and volleyball courts, as well as soccer, baseball and softball fields enclosed by the Reba S. McClanan Fragrance Garden and Miyazaki Japanese Garden. Huntington Park in Newport News is one in the same, but tacks on beach access to its recreational amenities.

Natural areas like Portsmouth’s Paradise Creek Nature Park , restored and operated by the Elizabeth River Project, and Virginia Beach’s Pleasure House Point, once slated for waterfront development and now preserved as an important wildlife habitat and natural resource as well as hiking trails and water access for us humans, offer a more pristine experience.

Mini golf, anyone? Pair a hole-in-one with river views at Chesapeake’s Northwest River Park. Skateboarders can revel in city parks too, mastering ollies and kickflips in designated skating areas at Portsmouth City Park and Mount Trashmore. If an open space for your furry friend is what you’re after, you’re in luck as several Coastal Virginia parks are equipped with dog-friendly areas. Bayville Farms Park in Virginia Beach has separate play spaces for small and large dogs while Williamsburg’s Waller Mill Park has doggie obstacle courses, too.