Make a couple of turns off Mill Dam Road in Virginia Beach and you might just think you’ve arrived in Palm Springs. But, no, you will have stumbled onto Woodhurst, Coastal Virginia’s premier enclave of Mid-Century Modern homes built back in the day by Oliver & Smith.

You know the look even if you don’t know the name. Everyone, it seems, is obsessed with Mid-Century Modernism. And with good reason. MCM refers to a style of architecture built c. 1933–1965 (some say 1945–1980s) characterized by sleek, flat planes, large windows and open but defined spaces. Changes in elevation, a connection to the outdoors and flat or asymmetrical sloping rooflines are hallmarks.

The greatest drawbacks to these homes are leaks if the roof is flat. But that is not the case with this dwelling where two sisters, one on each coast, reconceived of their MCM as a home for a 21st-century family and, particularly, an “escape” for them and their other three sisters.

No time capsule, the house manages to retain all of its vintage character but with the modern conveniences, finishes and fixtures desired by today’s homeowners. Architect Gerrie West, AIA, principal for Folck West Architects, and Hunter Folck, principal for Hunter Design and Construction, took the 1,460-square-foot home and doubled its size. Two bedrooms became four and one bath became three. 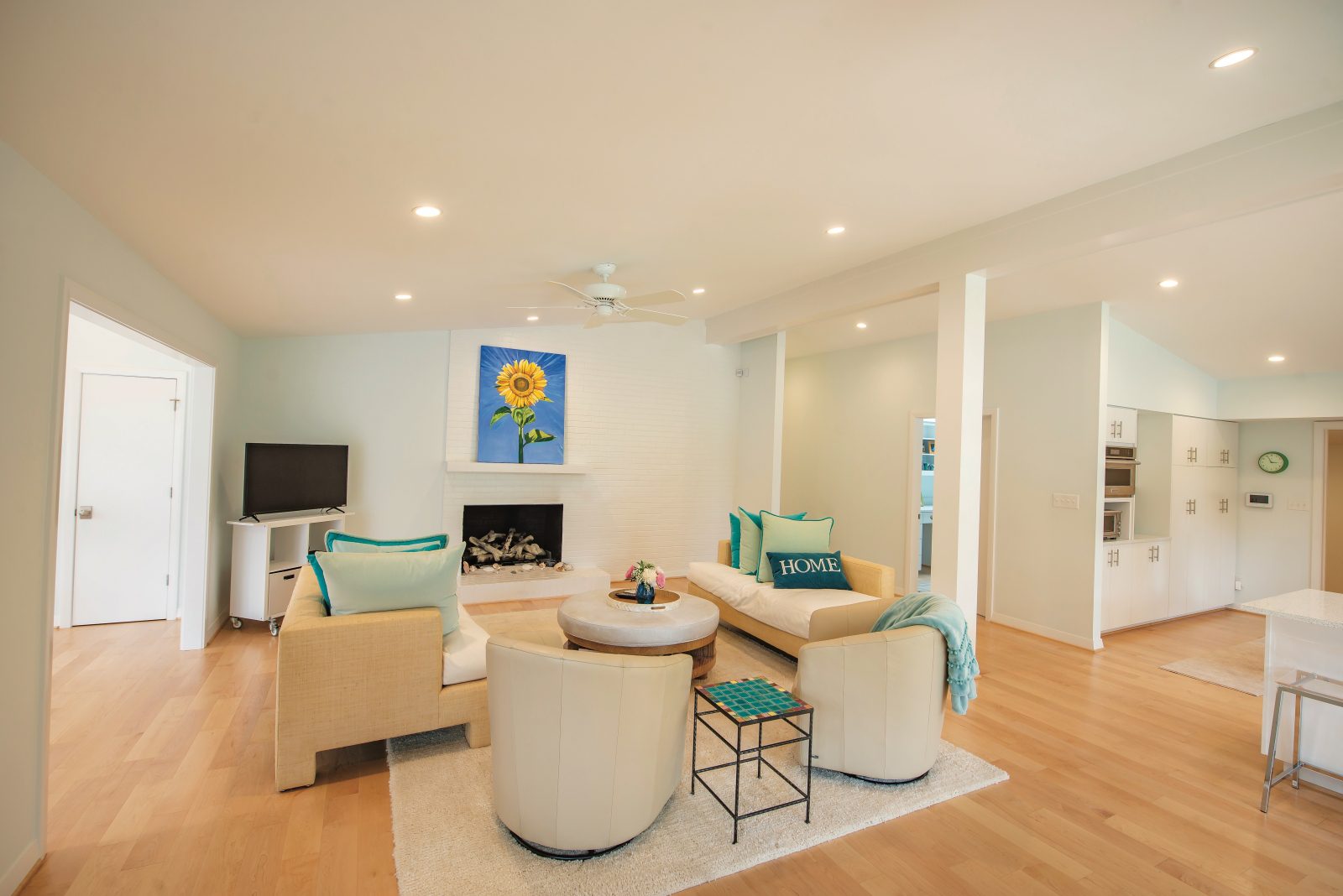 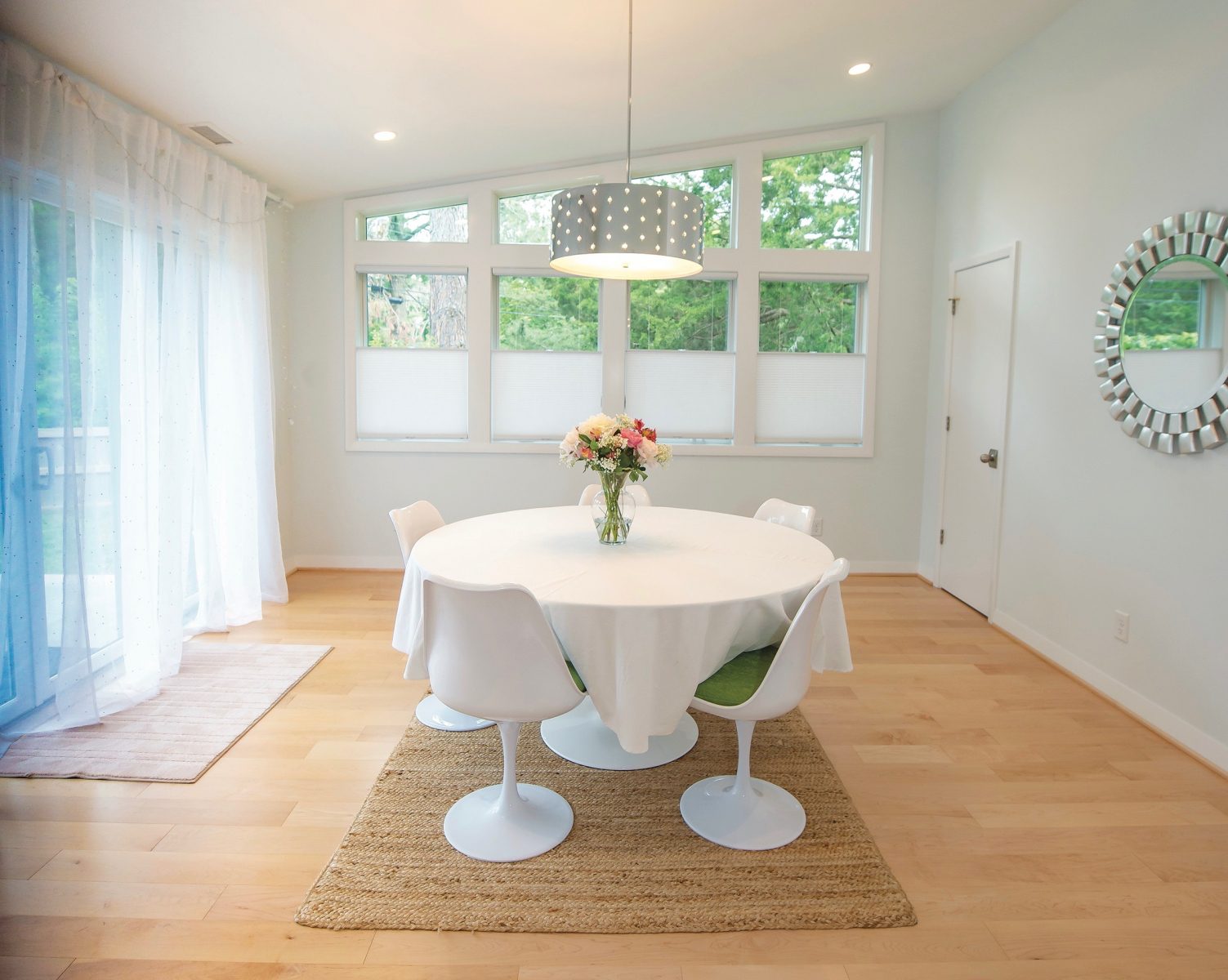 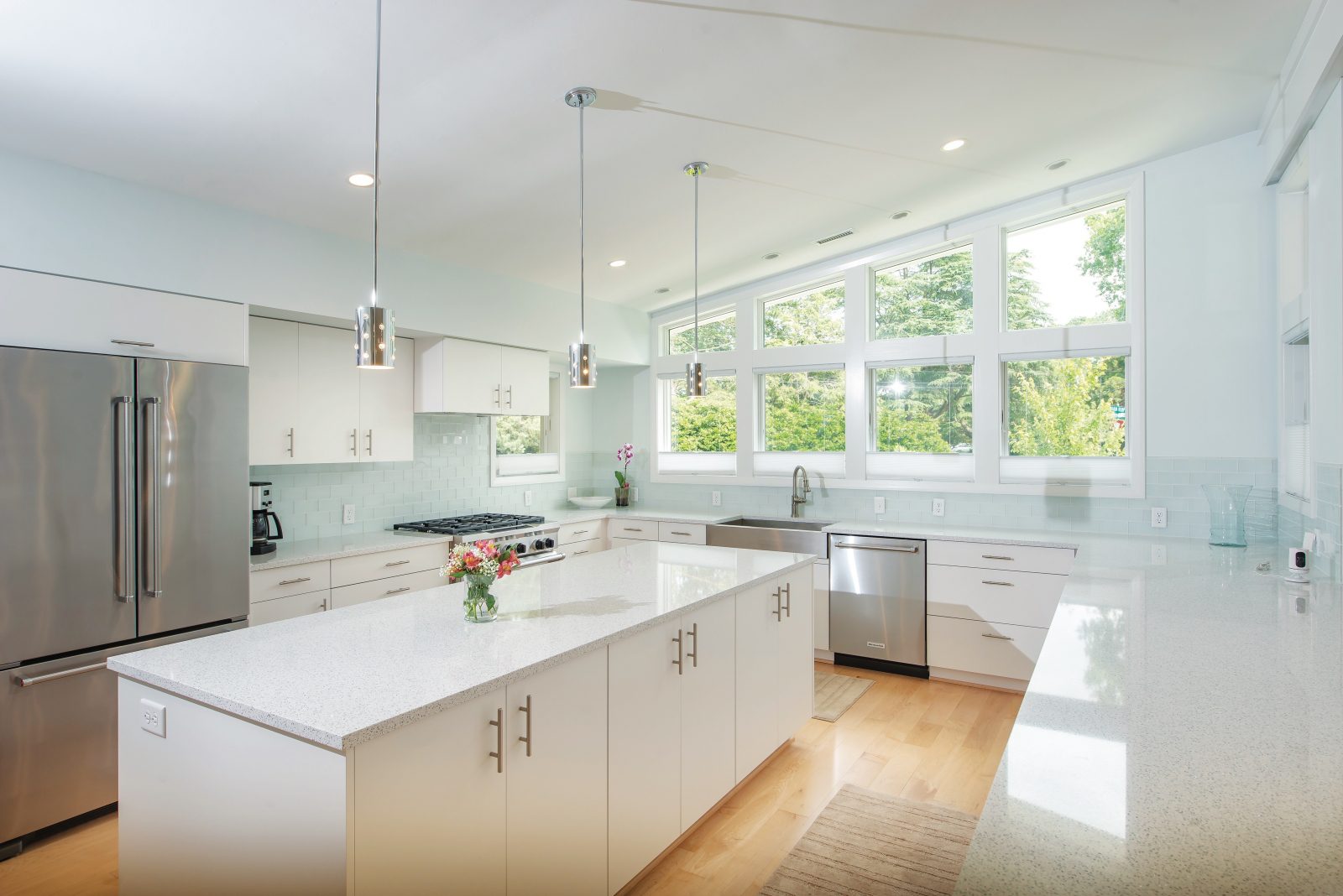 “Gerrie had a vision,” asserts the Virginia Beach sister. But West modestly claims that this long, cool drink of water “just happened.” In reality, a great deal of research and design smarts went into the remodel of the home. For all of her residential projects, West marries floorplan and roofline with homeowner desires. Intimately familiar with smaller MCM homes, she spent considerable time educating herself about the ins and outs of the larger iterations. Ultimately, to what was once a square box, she added four wings as large as possible without encroaching on setbacks.

While the “guts” of the house remain intact—as does that unmistakable MCM look—West blew out interior walls while maintaining “the integrity of the architecture.” For starters, she reimagined the kitchen, baths and closets, which were “not up to today’s standard.” She also opened up space for what the onsite sister calls “the Taj Mahal of laundry rooms,” a walk-in closet ample enough for a day bed and a brick-lined closet—essentially the back of the fireplace—that she has jokingly dubbed the wine cellar or the panic room.

A gray standing seam metal roof with deep eaves was added and “inappropriate replacement siding” removed in favor of board and batten siding. It, along with the brick, was painted taupe with white trim. With no set-in-stone guidelines for the design of board and batten, West spent considerable time determining the best proportion for the width of the boards in relation to the battens to create an ideal relationship that looked and felt right for this home.

Clean, modern casement, fixed and awning-style windows join glass doors to infuse this home with natural light. Both West and the homeowners desired lots of glass. Since doors afford the most, West explains, there needed to be something to step onto. This led to the addition of blue stone paver patios trimmed in brick off the dining room and bedrooms. 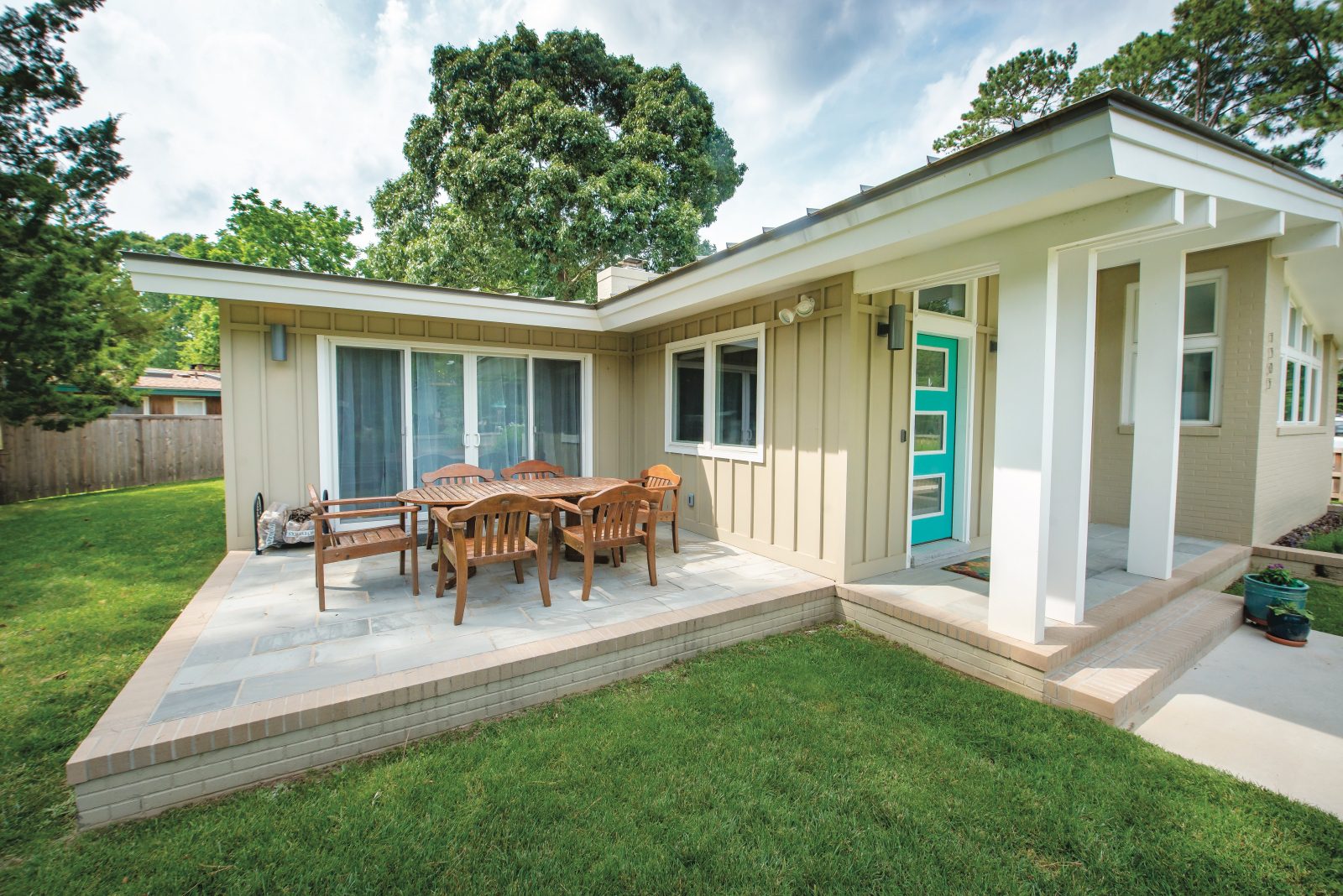 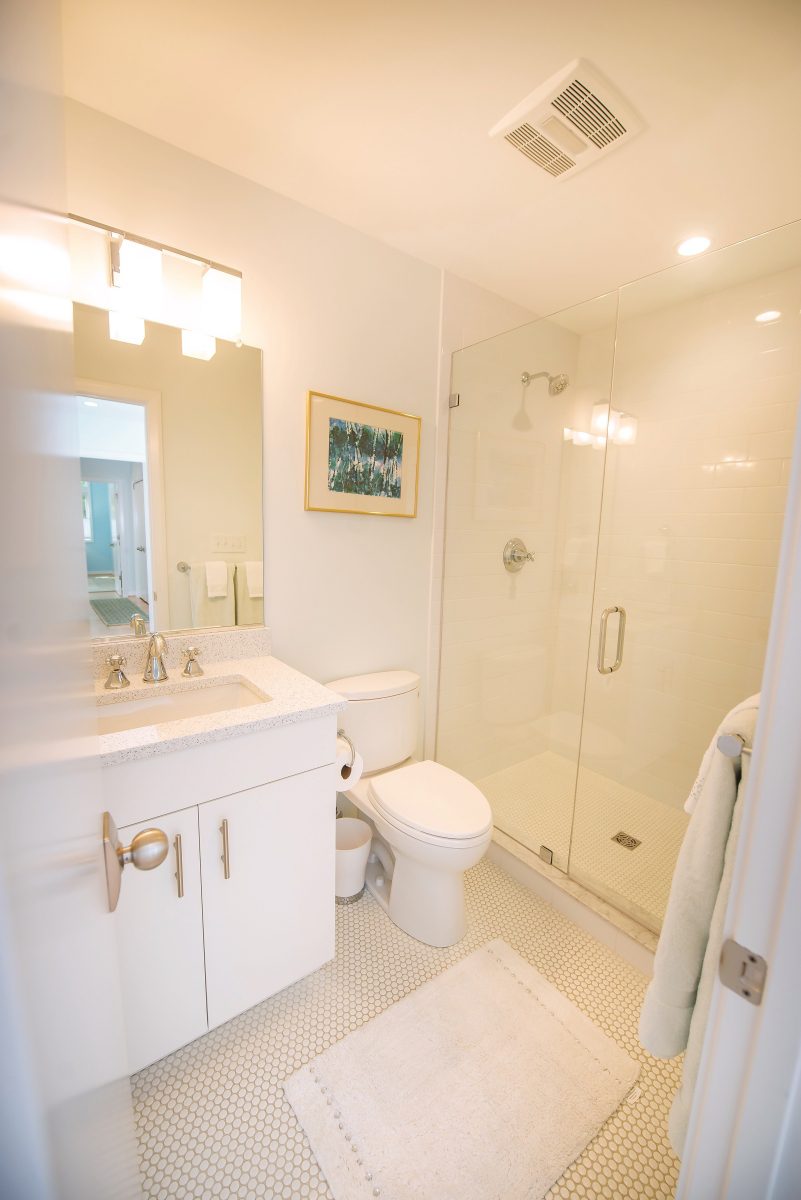 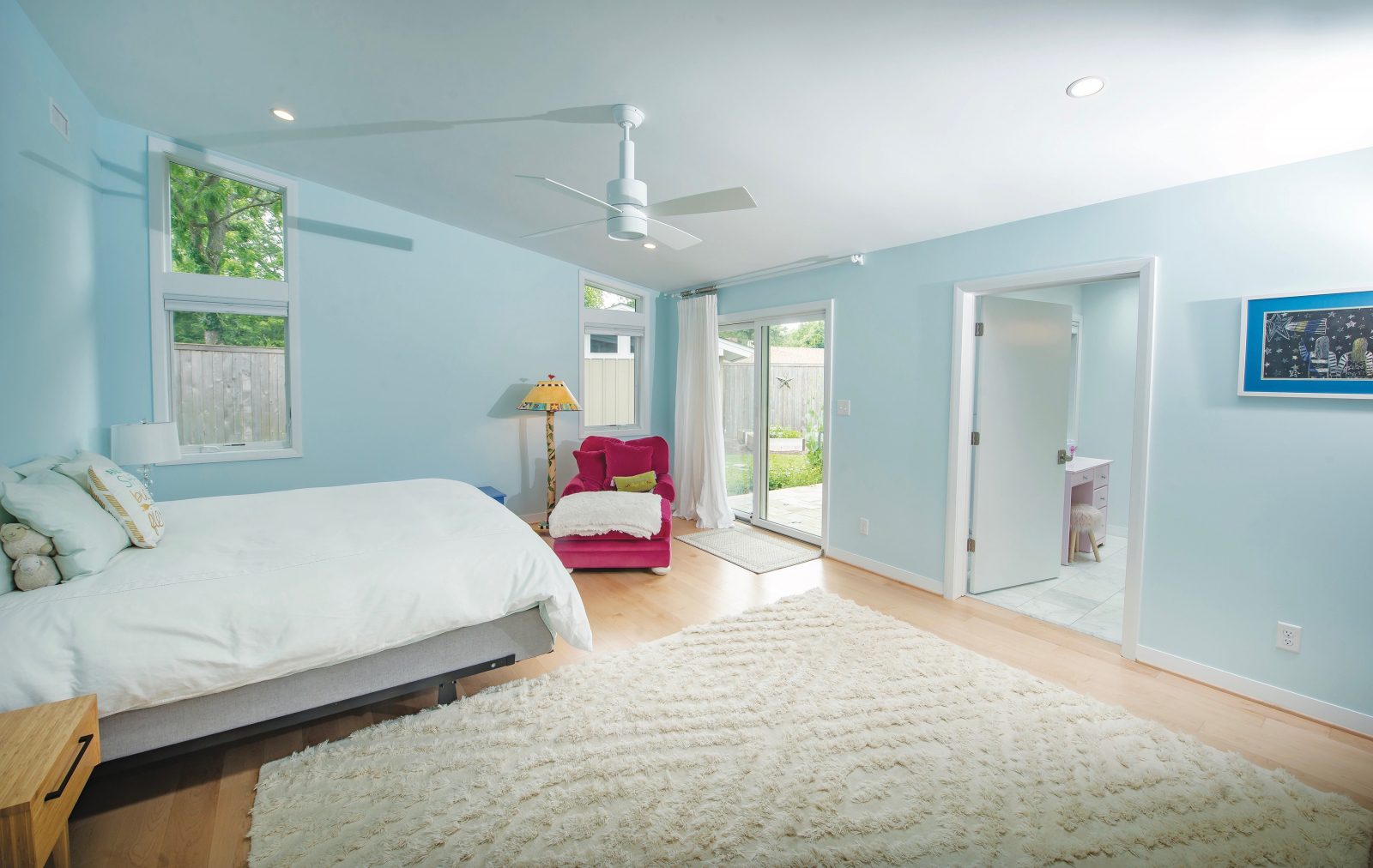 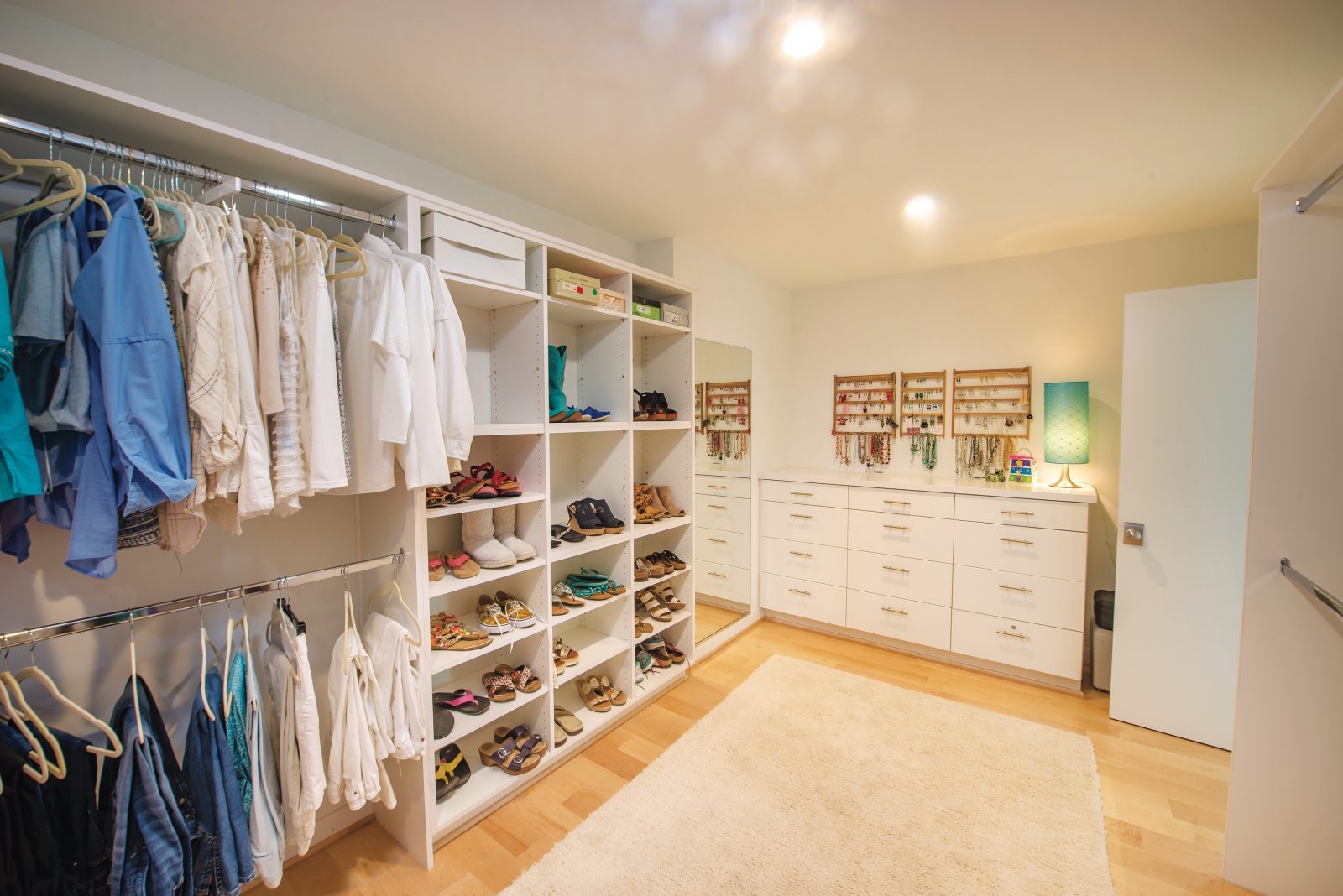 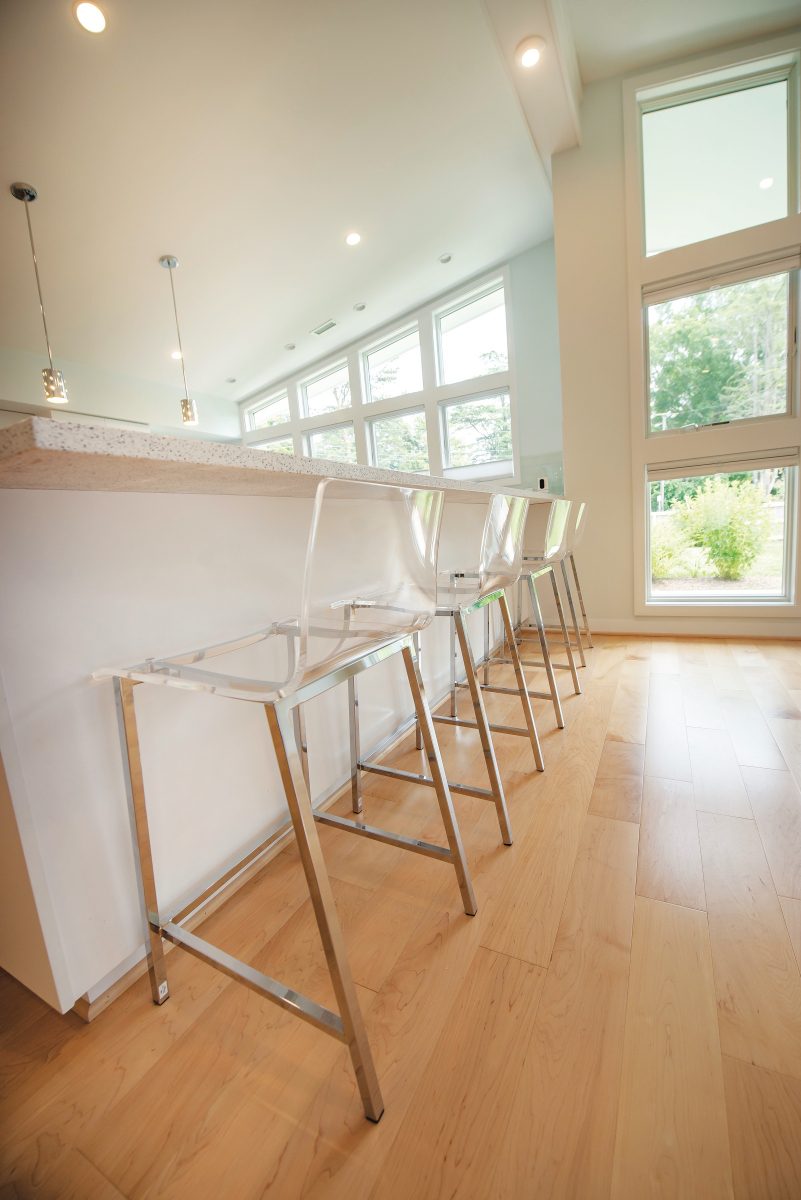 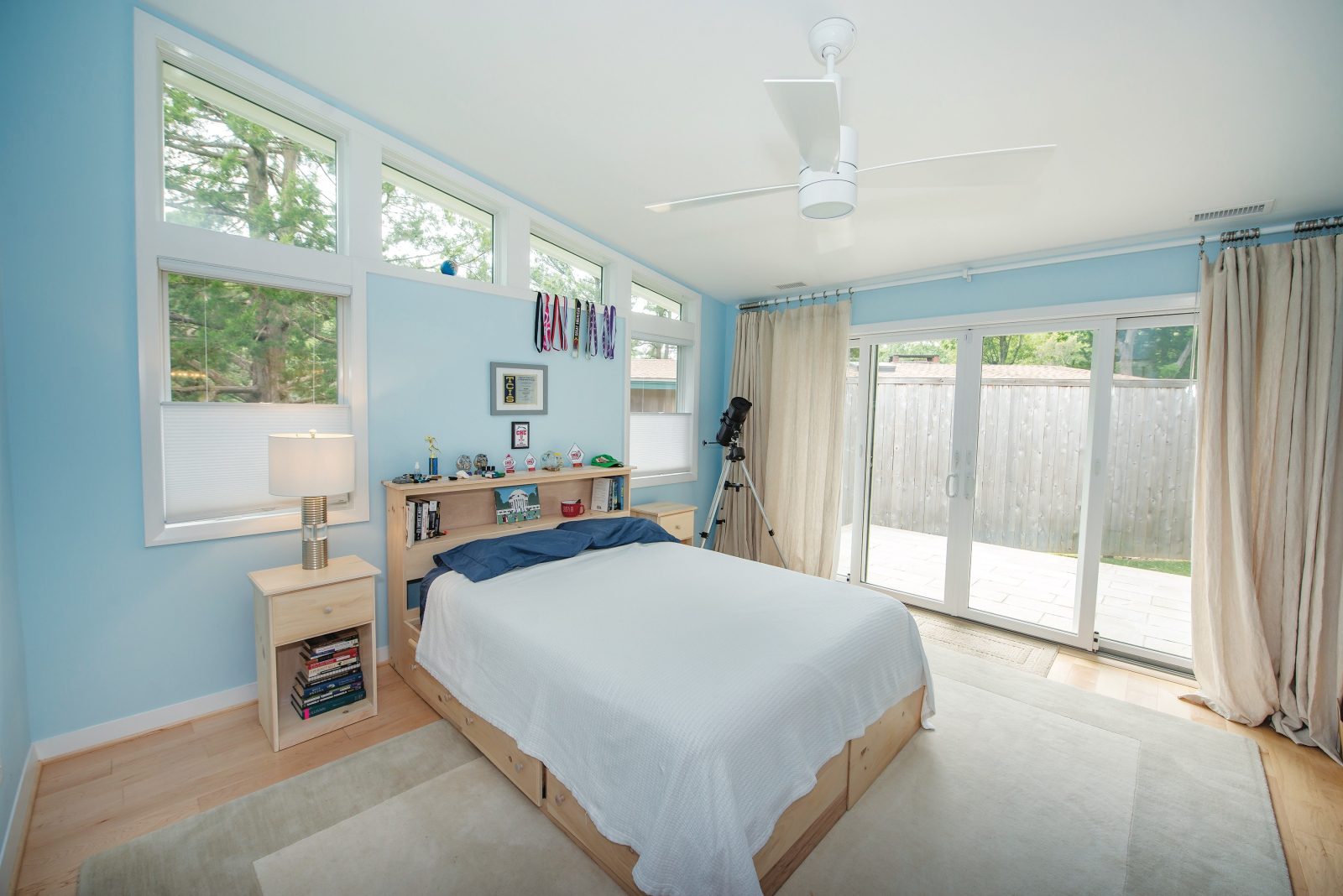 Natural maple wide plank flooring anchors the airy interior. The walls of the main living spaces, which appear a clean white, are actually “Patriotic Blue” or white with the barest tinge of a fresh blue. A crisp, white wall featuring a painted brick fireplace provides a subtle but striking accent in the living room. For the bedrooms, a more pronounced tint of blue enlivens the walls without sacrificing the serene feel. Clamshell or ranch-style trim with its geometric but softly curved profile is true to the period with its leaner, sleeker proportions.

A cohesive color palette of whites, grays and silver for built-in cabinetry, countertops and hardware keeps the look cohesive and cool, like an ocean breeze wafting throughout. White penny tiles on bathroom floors are a nostalgic nod, as are Lucite barstools at the kitchen peninsula. The see-through stools contribute to the airy feel, while a glass subway tile backsplash suggests the color of water in a tranquil pool. Stainless steel appliances and silver finishes on sleek hardware, faucets, pendant light fixtures and mirror frames provide continuity.

Furnishings lean toward light neutrals with the occasional pops of color, often greens and aquas, and a few tactile and eclectic surprises for unexpected flare. Although the resident sister is an art teacher whose friends encourage her to hang more artwork, she enjoys the sparse Zen feel of her home. Decorative objects are largely limited to a few family photos, a duet of paintings of the family dog by her and one of her sons and a sentimental pair of threadbare white lambs that she tucks next to a throw pillow on her bed.

An outdoor shower, a raised vegetable garden, native plantings and friendly bees speak to her love of all things organic. From the inside to the outside, this home is for her “such a sanctuary.”

Betsy DiJulio is a full-time art teacher, artist and curator with side hustles as a freelance writer, including for Coastal Virginia Magazine, and a vegan recipe developer and food stylist and photographer for Tofutti Brands. 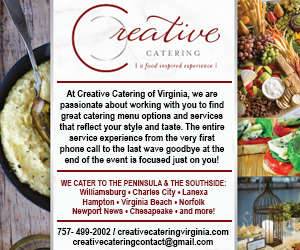