As I navigate my car from interstate tarmac to off-road gravel, I reflect on John’s instructions: You’ll make a right just across the street form a church. You’ll see a bunch of ‘No Trespassing’ and ‘Private Property’ signs, but just keep going. As directed, I traverse the lengthy stretch of drive flanked by soy bean fields and dirt paths leading to an off-limits brick estate, the foreboding indicator that I have arrived to the heavily surveilled Hampton Roads Materials.

The private Williamsburg grounds are owned and maintained by Howard Hankins, an expert in recycling industrial materials. Amid the towering mountains of mulch, defunct vehicles, excavators and shipping containers lies quite the collection of abandoned goods, and the purpose behind my Williamsburg visit: 42 concrete presidents’ busts, each upwards of 18 feet in height, stand resolutely in neat rows at the back of Hankins’ property. These stately effigies were ordered to a stone crusher in 2010 when the nearby Presidents Park went bankrupt, but Hankins, the man ordered to destroy the heads, didn’t have the heart to carry out the task.

Albeit rescued, the stony figures held no purpose until avid storyteller and abandoned places photographer John Plashal breathed new life into the site. “I picked up photography at the age of 40 and just started driving the back roads of Virginia, looking for places to shoot and get better,” explains Plashal. “I was instantly attracted to the mood, the texture and the mystery [of abandoned places], which later escalated into me having this intense interest in finding out the stories behind these places.”

Plashal is known to knock on doors, hang out in diners, stop by fire stations or loiter in gas stations to find out the history behind every rickety floorboard and dilapidated roof his camera captures. “Rural Virginians are beautiful,” he says. “What starts as a 30-minute coffee date with a stranger, the next thing you know they’re driving me to their house so we can rifle through boxes of pictures in their living room.”

Plashal took the same ‘disarm with charm’ approach when contacting Hankins about the presidents' heads back in March. “I called Howard and said, ‘Look, you don’t know me but I have a pedigree—I’m an author, I’m a speaker, I have a business plan,’” says Plashal. He continued with a pitch to photograph and lead public tours of the heads. “Our partnership now allows us to come here legally by charging admission and having guests sign a waiver form.”

During my November visit, I tagged along with a group of enthusiastic photographers who traveled all the way from Maine, New York and Washington, D.C. just to capture the busts during an evening photo shoot. They experimented with angles and adjusted their exposures while waiting for the light painting instructor, Jimmy Powell, to arrive. Not the least bit camera savvy myself, I took this time to steal away with Plashal to learn more about the forlorn attraction.

He first points out that 35 of the 42 busts are 25% smaller than the remaining seven, a deliberate design choice by the heads’ Houston-based sculptor. Boasting their greater mass are George Washington, Thomas Jefferson, Woodrow Wilson, Andrew Jackson, Abraham Lincoln, Theodore Roosevelt and Franklin D. Roosevelt, all of whom the sculptor deemed VIP presidents for their notorious nature and ability to influence.

Plashal then notes that in addition to their battered appearance, each head is exposed at the crown. “If you’re looking down aerially at all of these, you would see a hole in their head. The purpose of that was to expose their steel infrastructure so [Hankins] could take an excavator, lift them onto a flatbed truck full of tires and strap them down,” explains Plashal. Ironically, Lincoln was the only bust to fall off of the flatbed during the move, resulting in a blow to the back of the head that is eerily similar to that of the fatal wound he suffered in 1865. 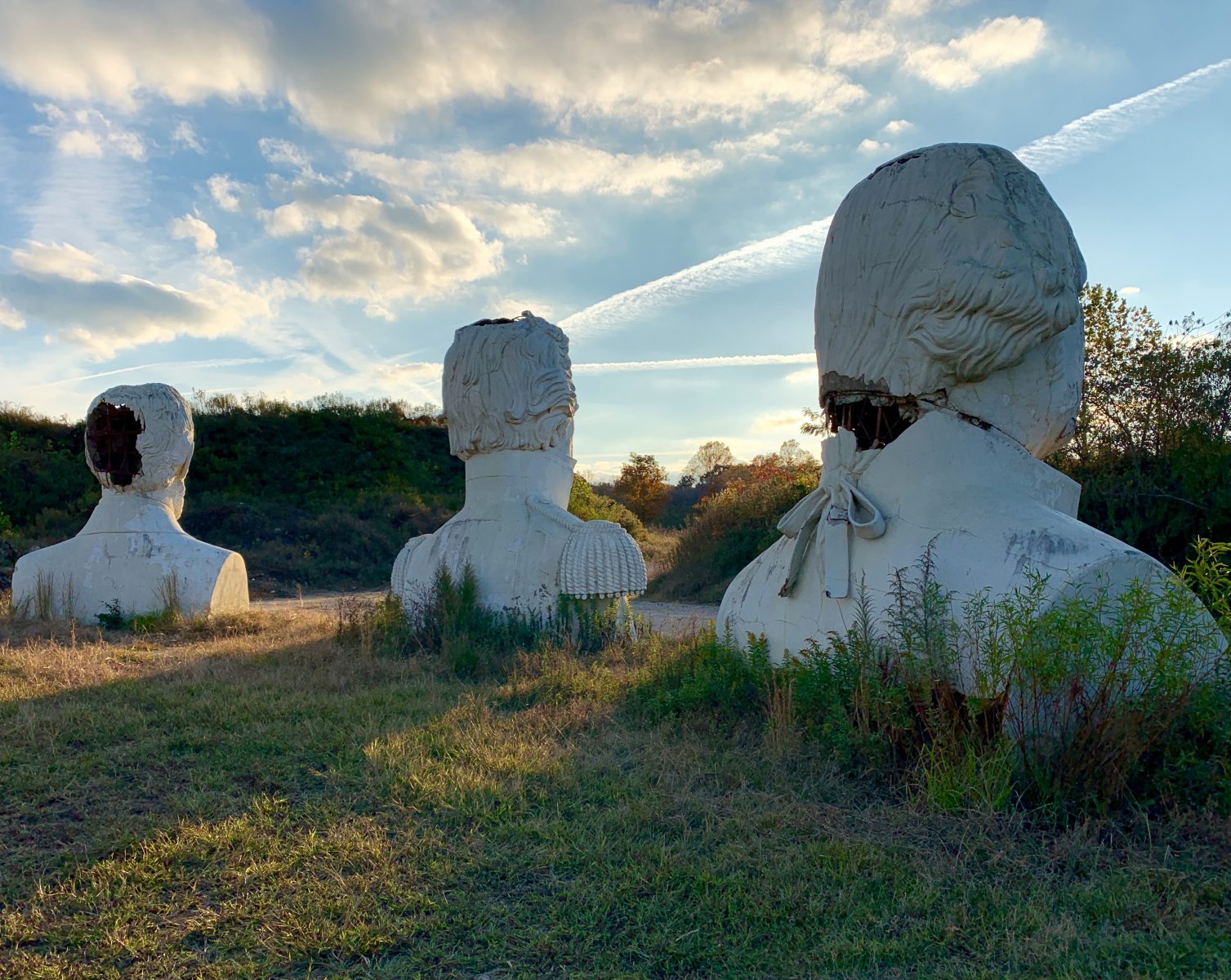 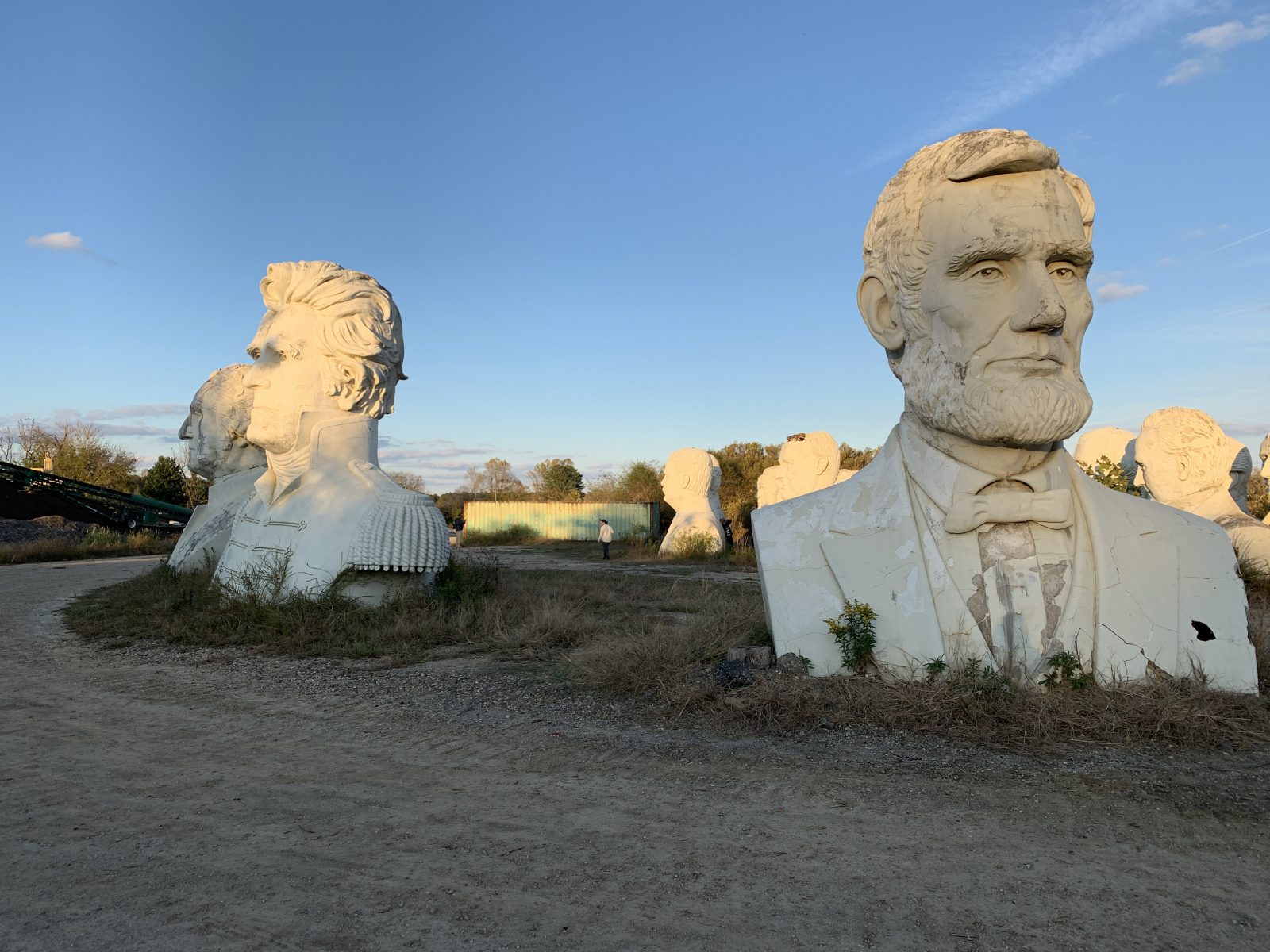 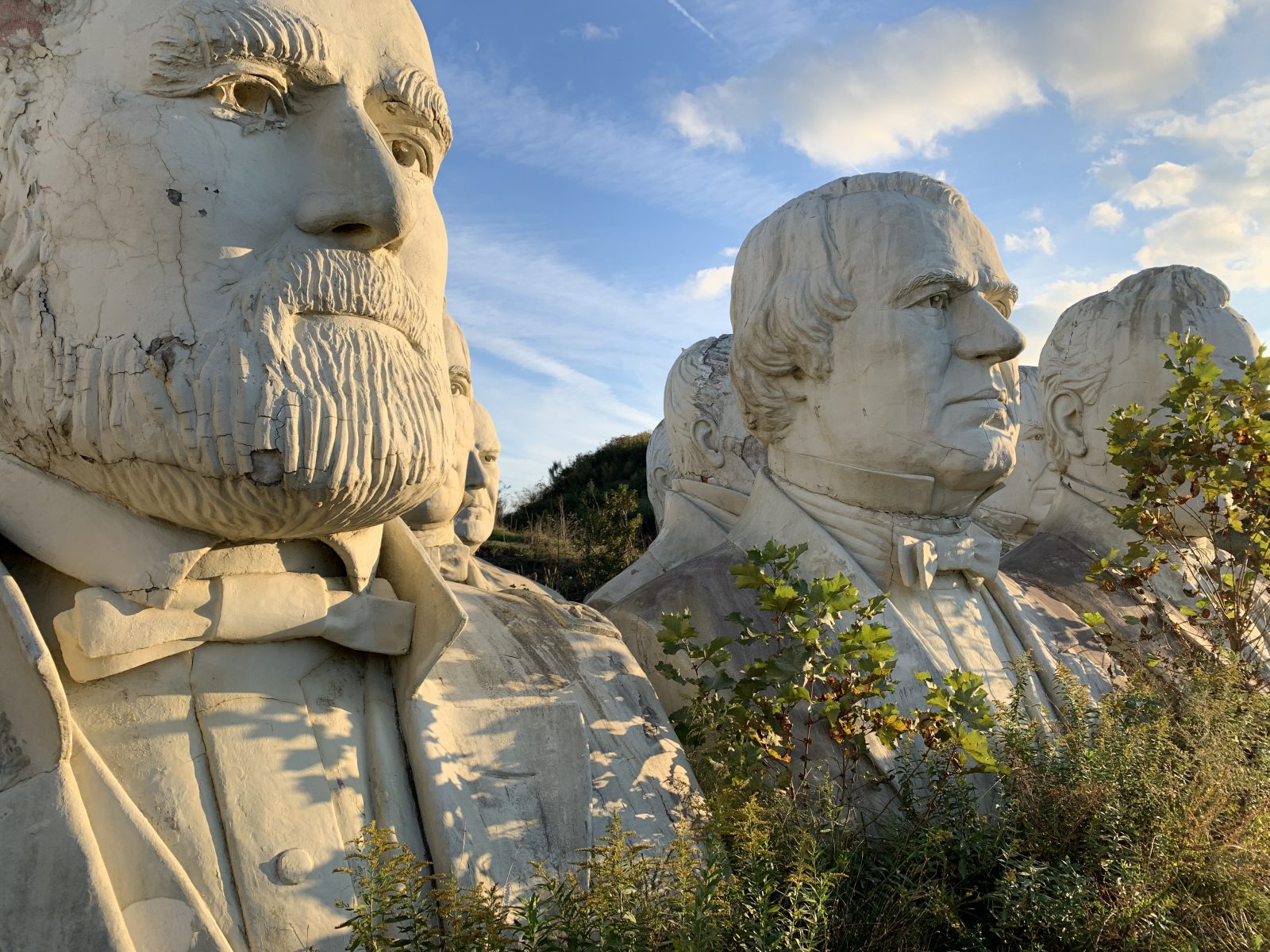 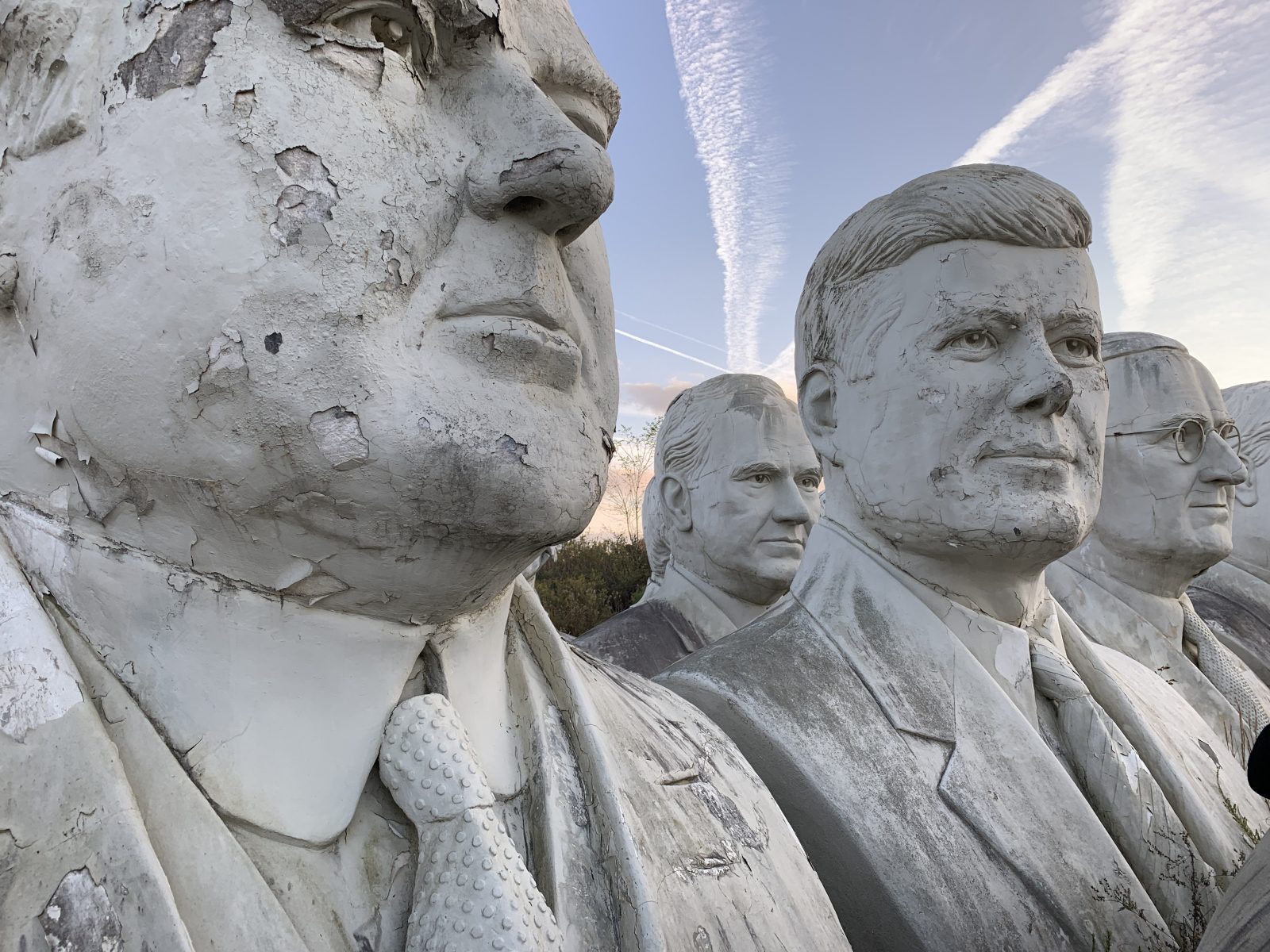 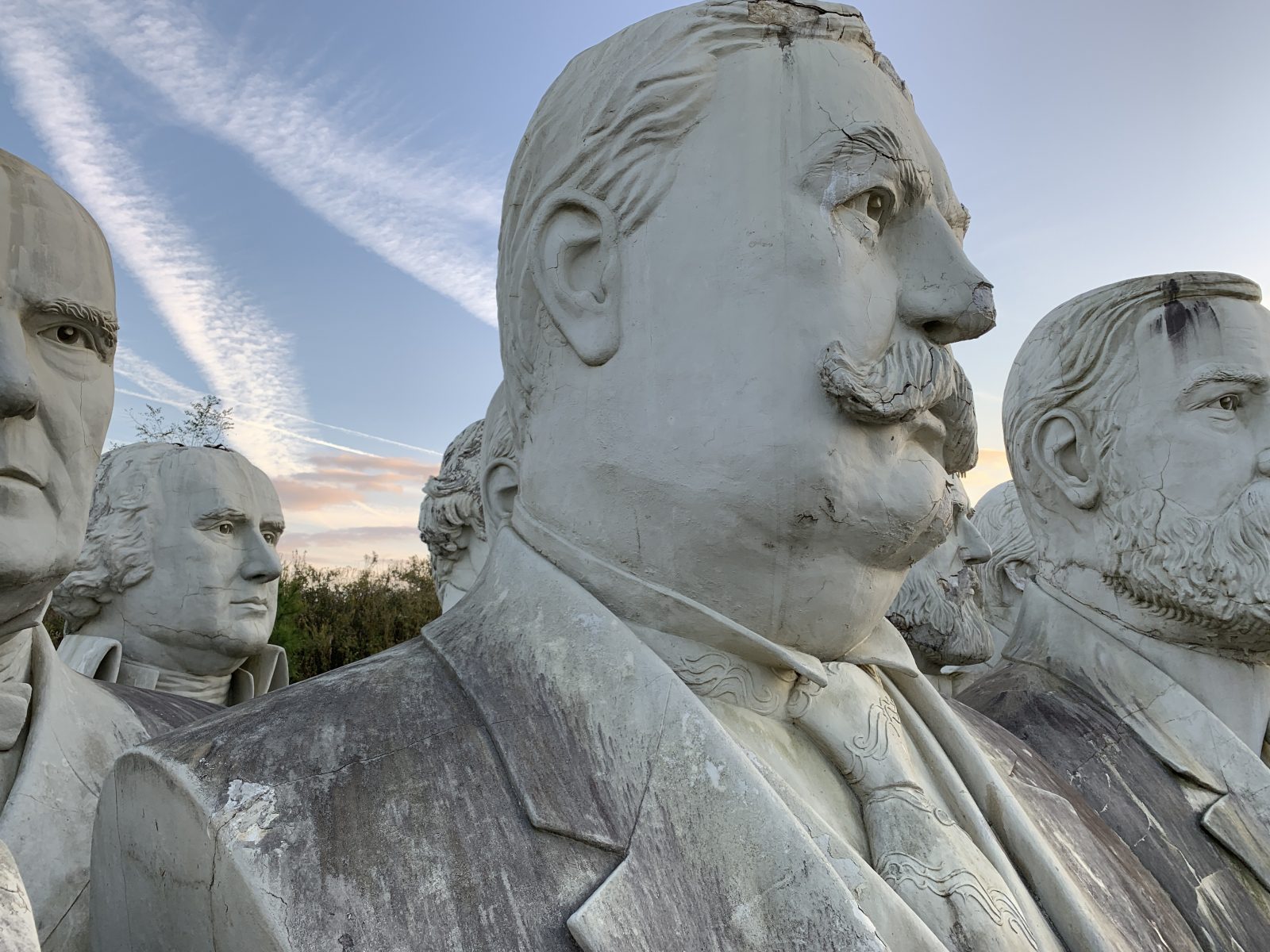 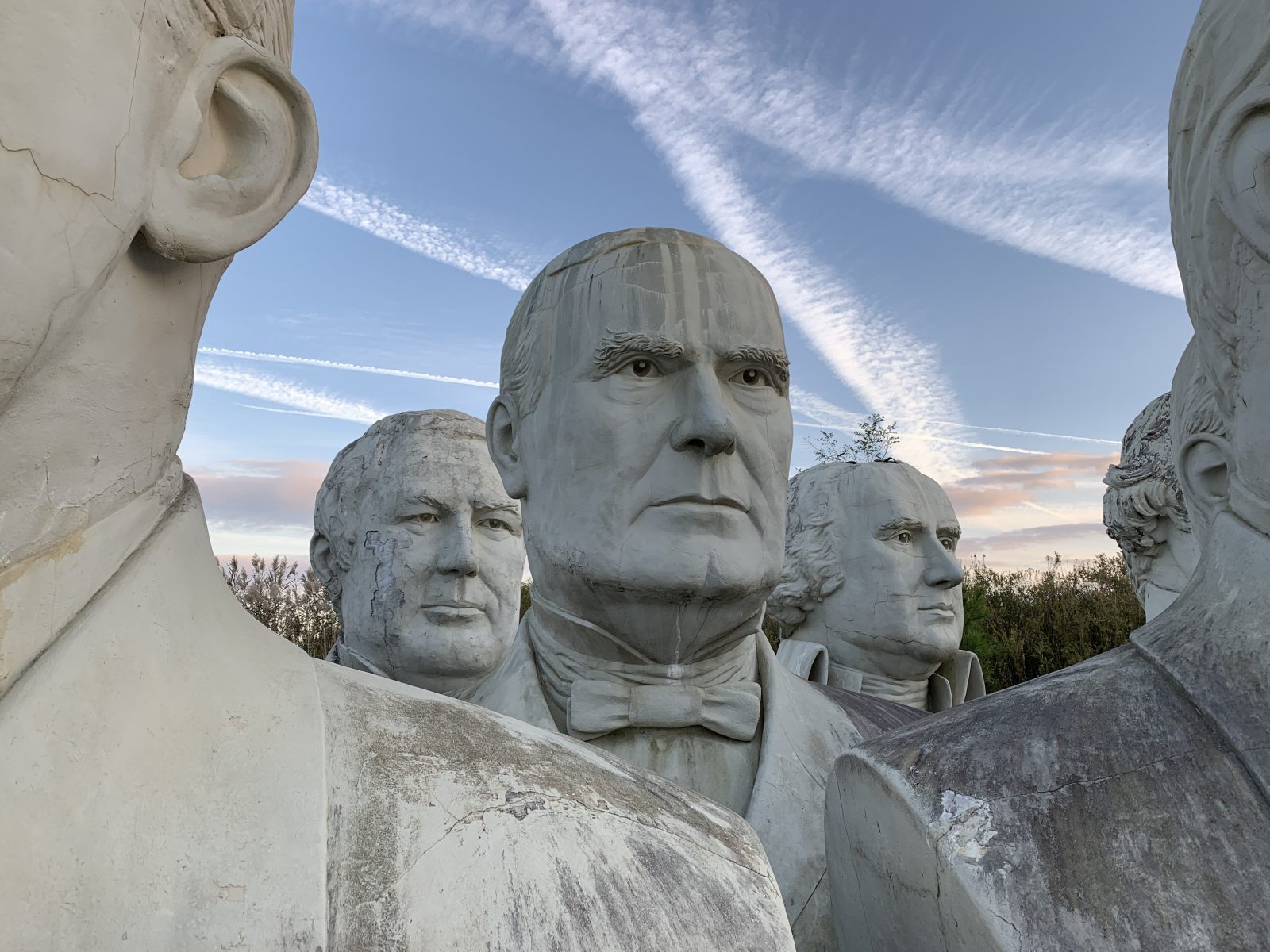 Other anecdotes reveal intricacies in the busts’ details such as the elephants on George Bush’s tie, the wasp nest in Wilson’s right eye, the bridges of missing spectacles and the U.S. Army markings on Eisenhower’s jacket. During the day tour, Plashal supplements these elements with arbitrary facts about each president. He discovered quickly that property visitors weren’t after the textbook accomplishments of our nation’s leaders, but rather out-the-box stories that would wow their friends at home. Perhaps the most outlandish of tales is the disappearance of the Barack Obama statue. “We had [a 2-foot-tall prototype] of Obama, a miniature White House and all of the original placards [in a shipping container],” says Plashal. “During one of my evening classes, someone actually stole Obama. He ended up returning him, but [Obama] is now under lock and key and we only bring him out four times a year with security guards.”

To marvel at these accounts firsthand, sign up for one of Plashal’s day tours that run all winter long. His last evening photo shoot is scheduled for Saturday, Nov. 23 at 3 p.m. To learn more about Plashal or to purchase tour tickets, visit Facebook.com/JohnPlashalPhoto or JohnPlashalPhoto.com. 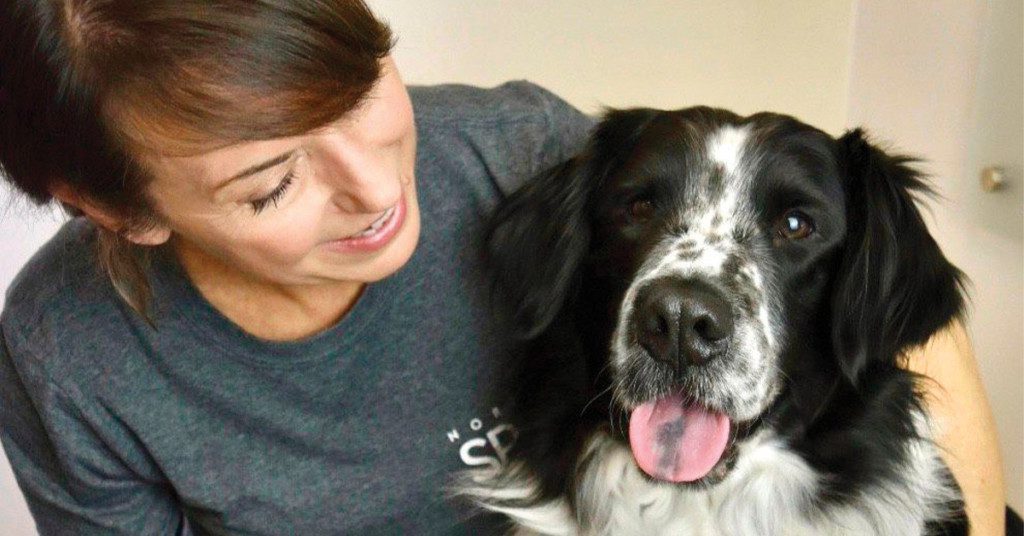 A New Life for Gus and Stella

By Kimberly Sherlaw Huddled in wire crates, siblings Gus and Stella arrived at the Norfolk SPCA unable even to look in the... 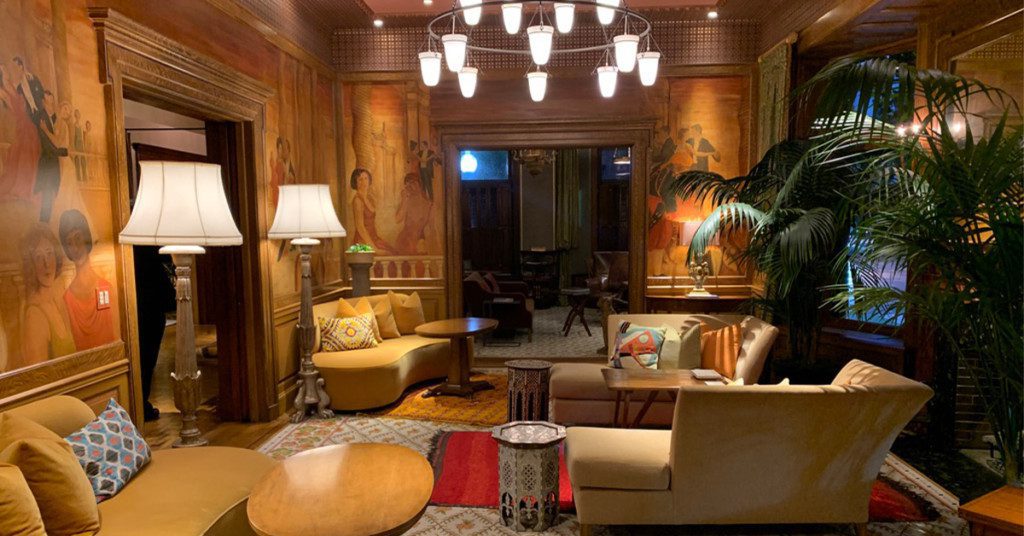 Unlock the Mysteries of The Ivy Hotel