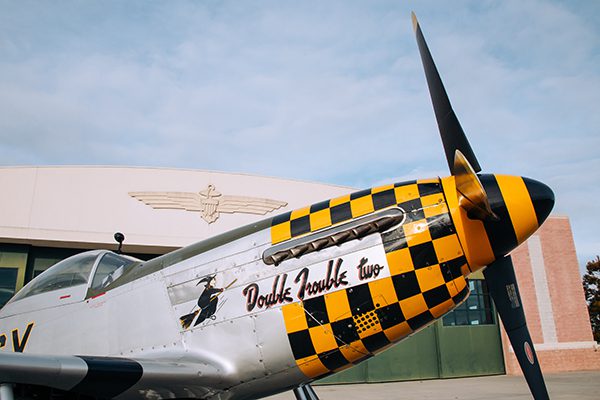 Double Trouble Two is a North American P-51 Mustang, the type of fighter plane flown by Americans that saw combat in the Second World War. It’s the kind of warbird in dogfights that dodged and nosedived, shelled the Axis powers and escorted bombers.

At the Military Aviation Museum in Virginia Beach, Double Trouble Two is part of an elite fleet of military aircraft from World War I and II, and among the world’s largest collections of historic planes restored and preserved from the 20th century.

Chief Pilot and Airshow Coordinator Mike Spalding is standing on a landing strip beside Double Trouble Two with its propeller jutting out toward the sky. Swing music sounds off outside of the hangar as Spalding indicates there’s an emphasis on WWII planes at the Museum and says, “They make a lot more noise and go faster.” Wearing a flight suit that’s suitable for flyers from the era, Spalding was born to be airborne.

Growing up in Norfolk, he took after his father who was a private pilot as he learned to fly in the Civil Air Patrol at age 16. He purchased a Stearman prior to a T-6 aircraft, a progression parallel to those serving in WWII. Now, Spalding oversees 15 pilots with the Museum, keeping up with airplane maintenance, flight testing and flying essentially all of the aircraft here. 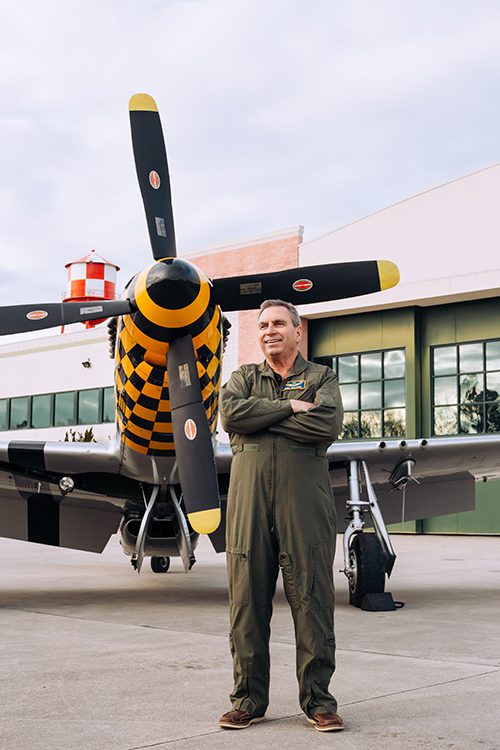 With all of its displays of aviation innovation, the Museum has taken off since its founding in 2008 and now has over 60 planes and about 40 that are flight-ready. You can see them daily at the Museum as well as at the Museum’s airshows Warbirds over the Beach, which has been postponed for October, Flying Proms in June and Biplanes & Brews in October.

Getting in the cockpit to fly a warbird such as Double Trouble Two is considered a rarity. “Knowing that you’re flying some airplanes that have given us the freedoms we have today in the U.S., and some of the great aces that flew those types of airplanes,” Spalding says, “it can be very surreal.” The feeling is reaffirmed as Spalding peers out over the wings thousands of feet in the air, soaring across the sky.