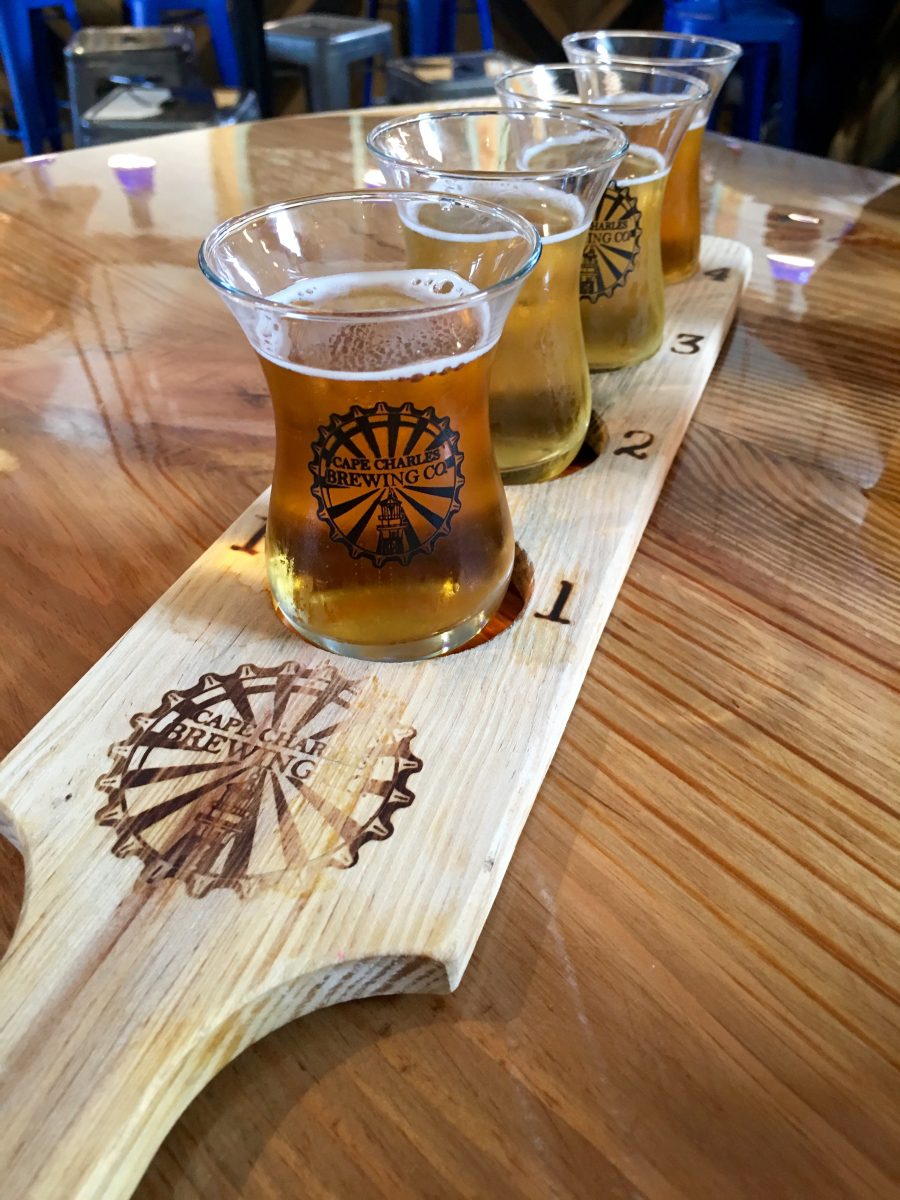 A mother, sheriff and former cookie salesman walk into a brewery. What sounds like the beginning of a corny joke is actually the crux of the Marshall family’s craft beverage empire.

Cape Charles Brewing Company is the result of a two-year endeavor fronted by former Isle of Wight County Sheriff Mark Marshall, brother Chris Marshall and mother Deborah Marshall. For nearly nine months, the craft beverage destination has been turning out some of the best brews and tastiest grub on the Eastern Shore. 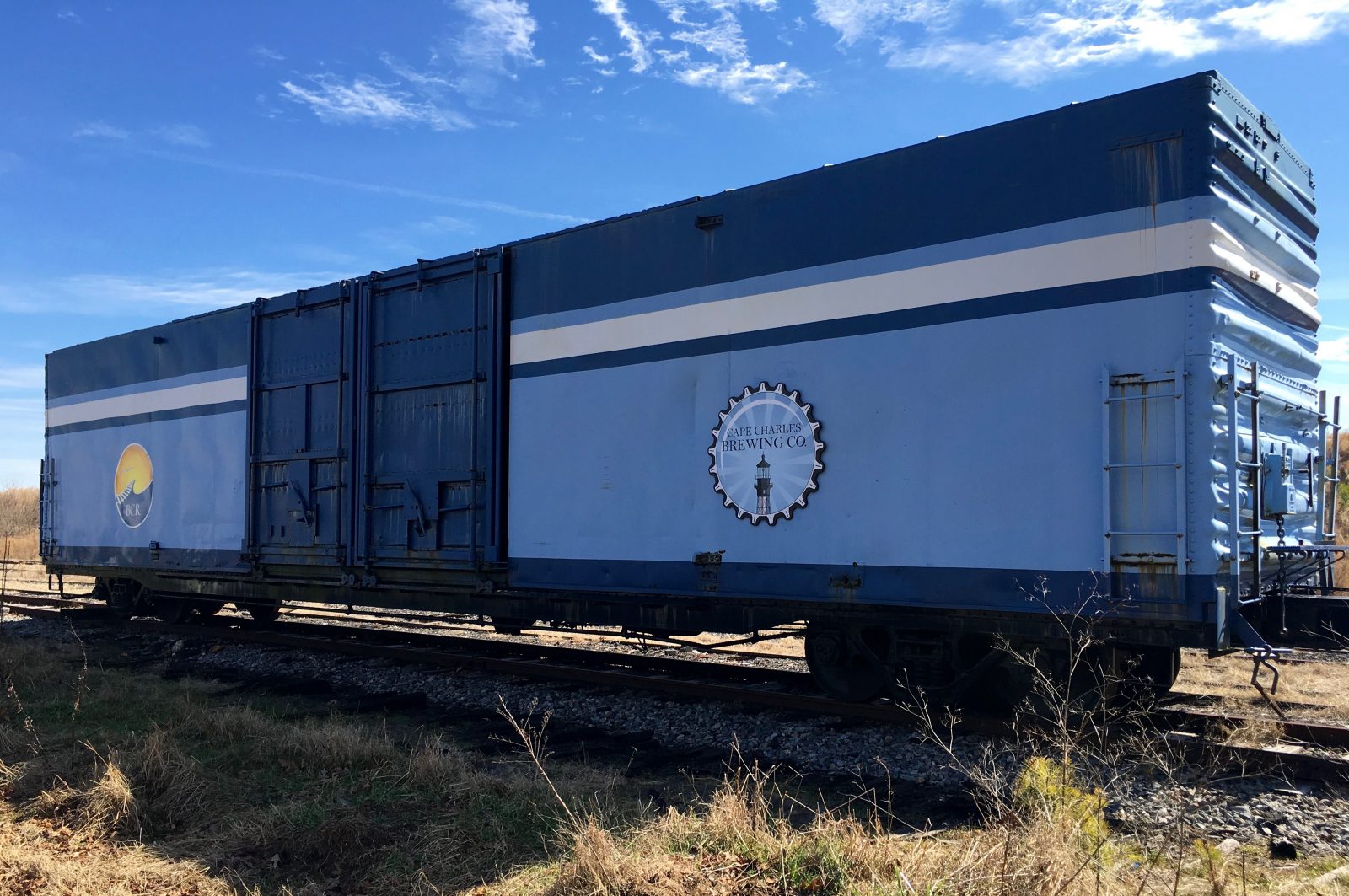 Tucked in sunbathed plains just west of Cape Charles’ Lankford Highway is the wood paneled exterior of the coastal brewpub. Standing proudly at the brewery’s entrance is a lofty water tower donning the blue and white Cape Charles Brewing logo. To the right of the gravel parking lot is a sprawling outdoor space equipped with coastal-colored Adirondack chairs, a hulking smoker-turned-firepit, cornhole boards, a golf cart path and three inoperable rail cars tying the brewery’s location to its historic train track roots. 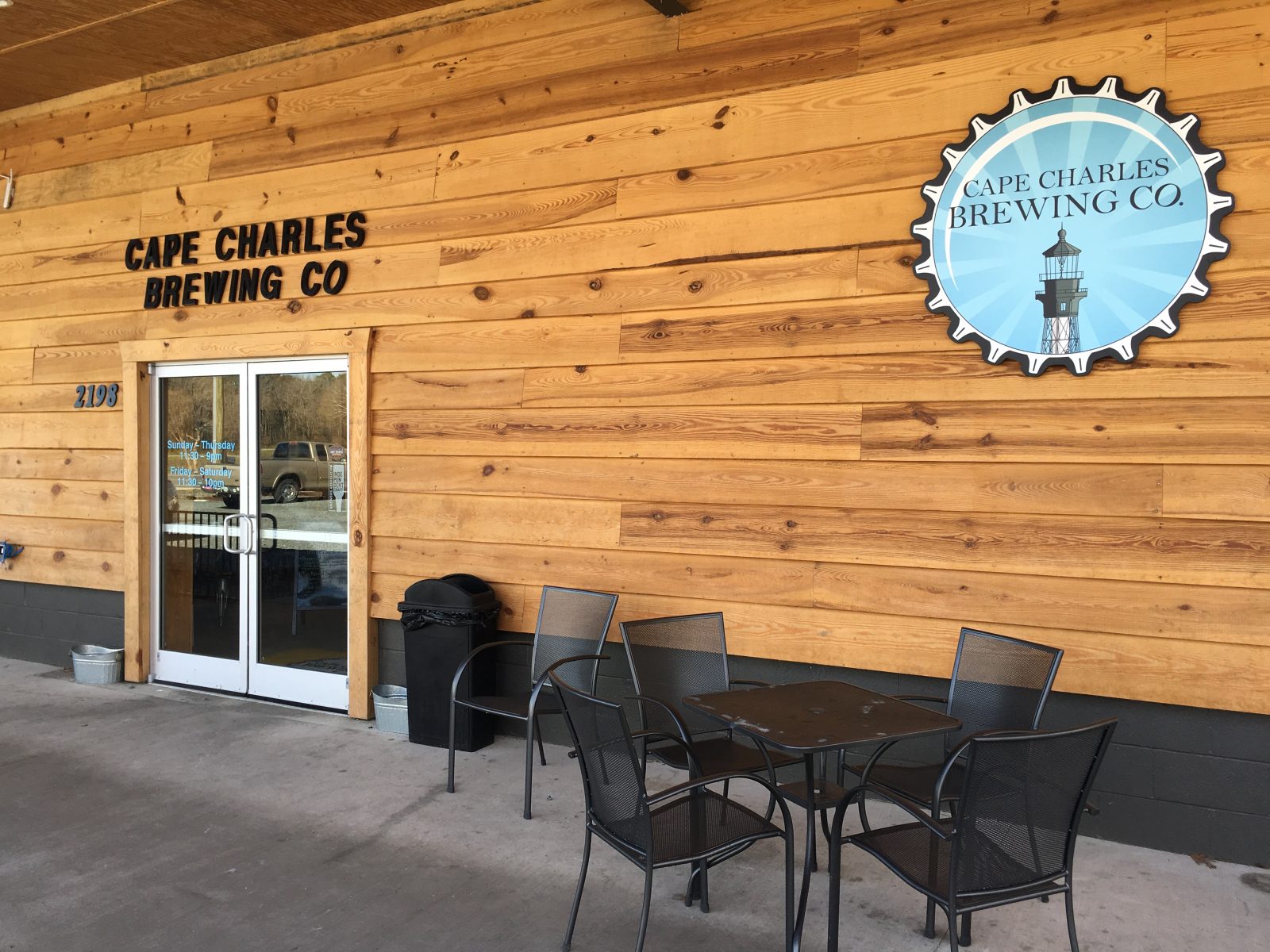 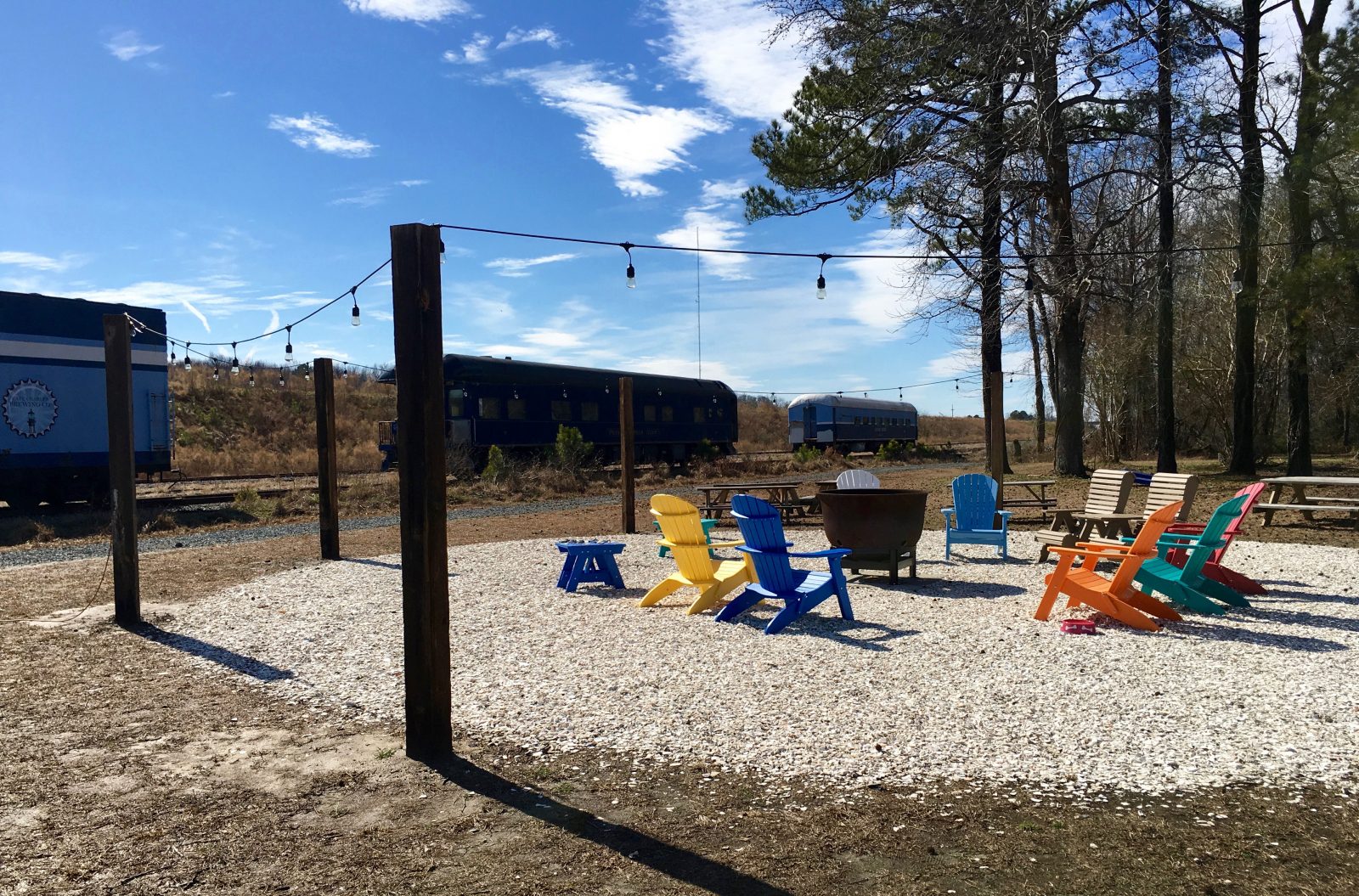 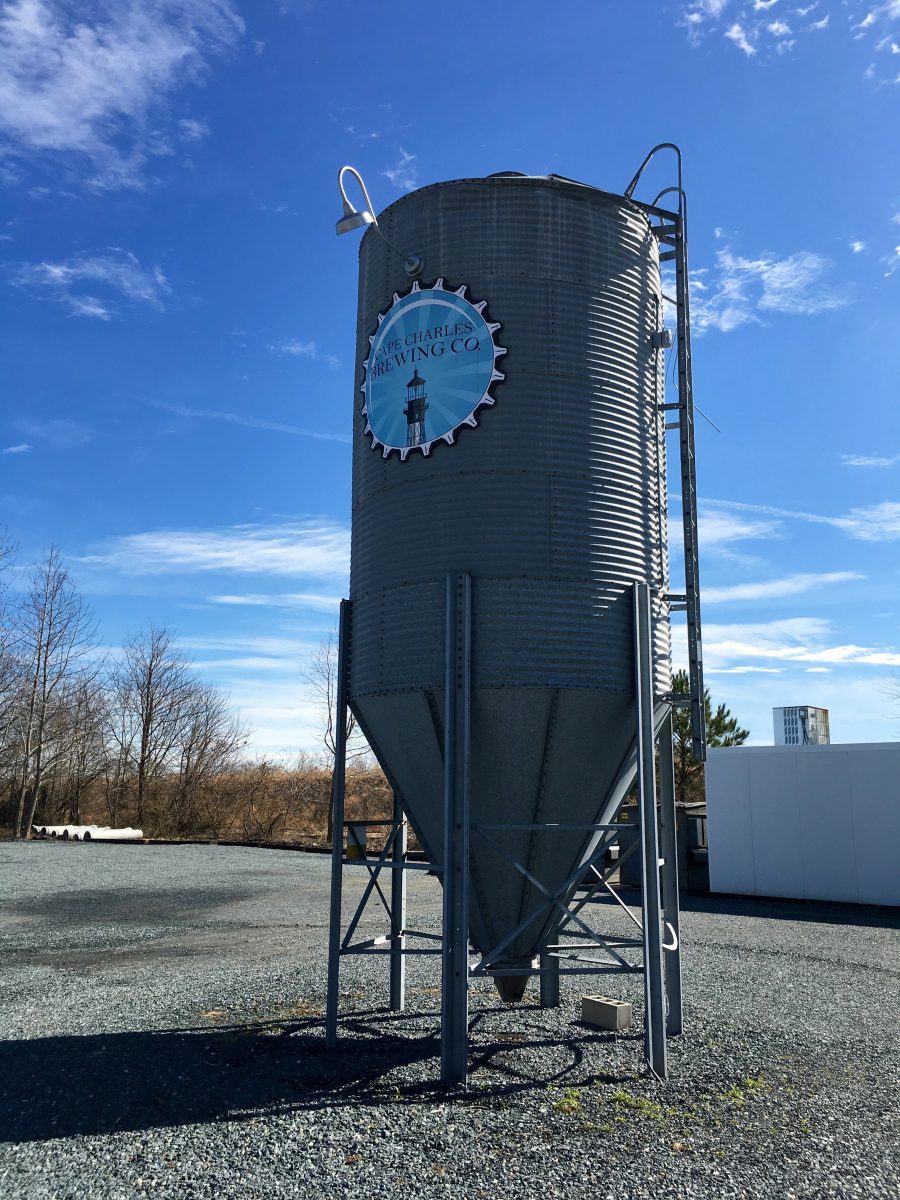 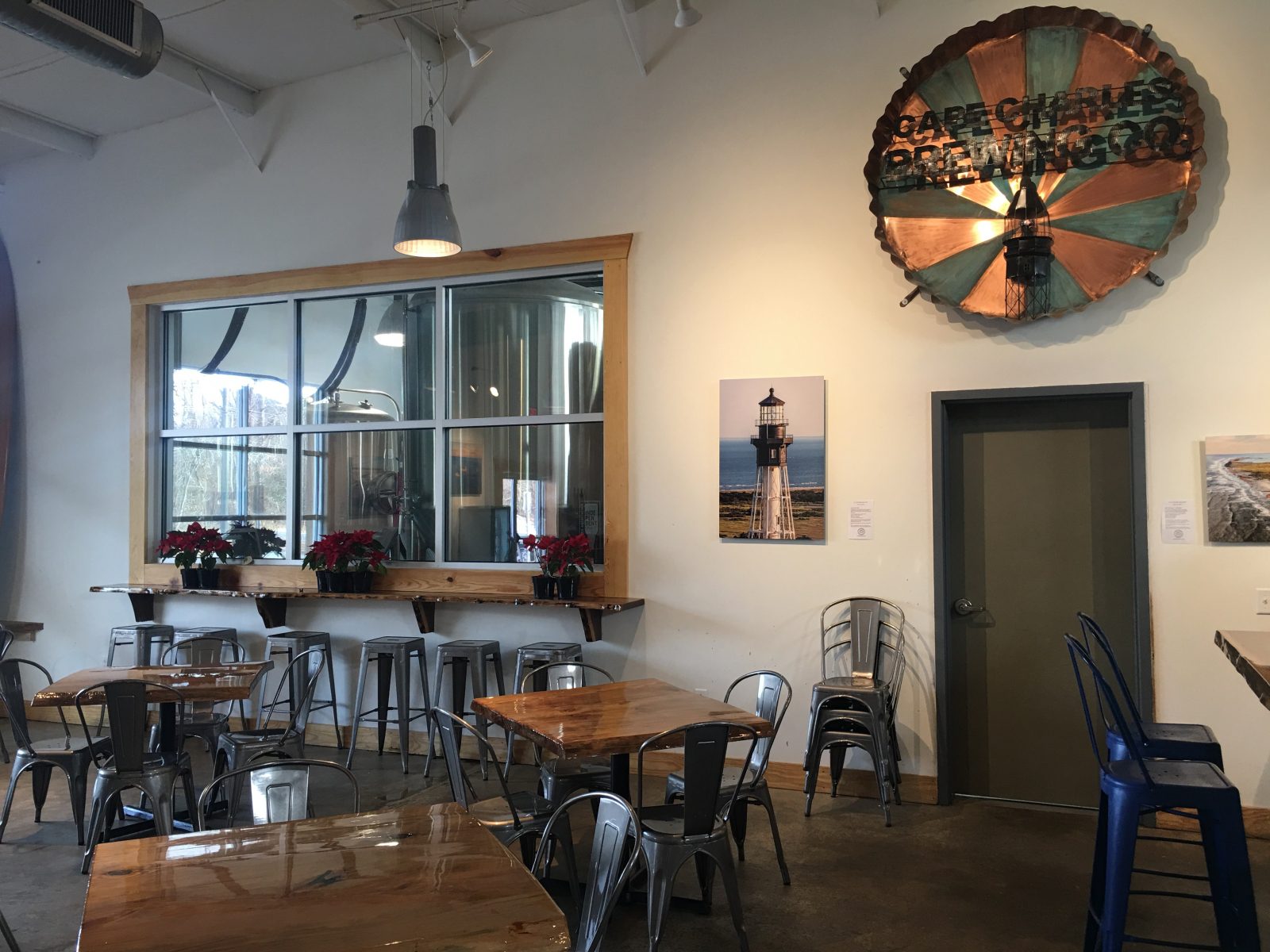 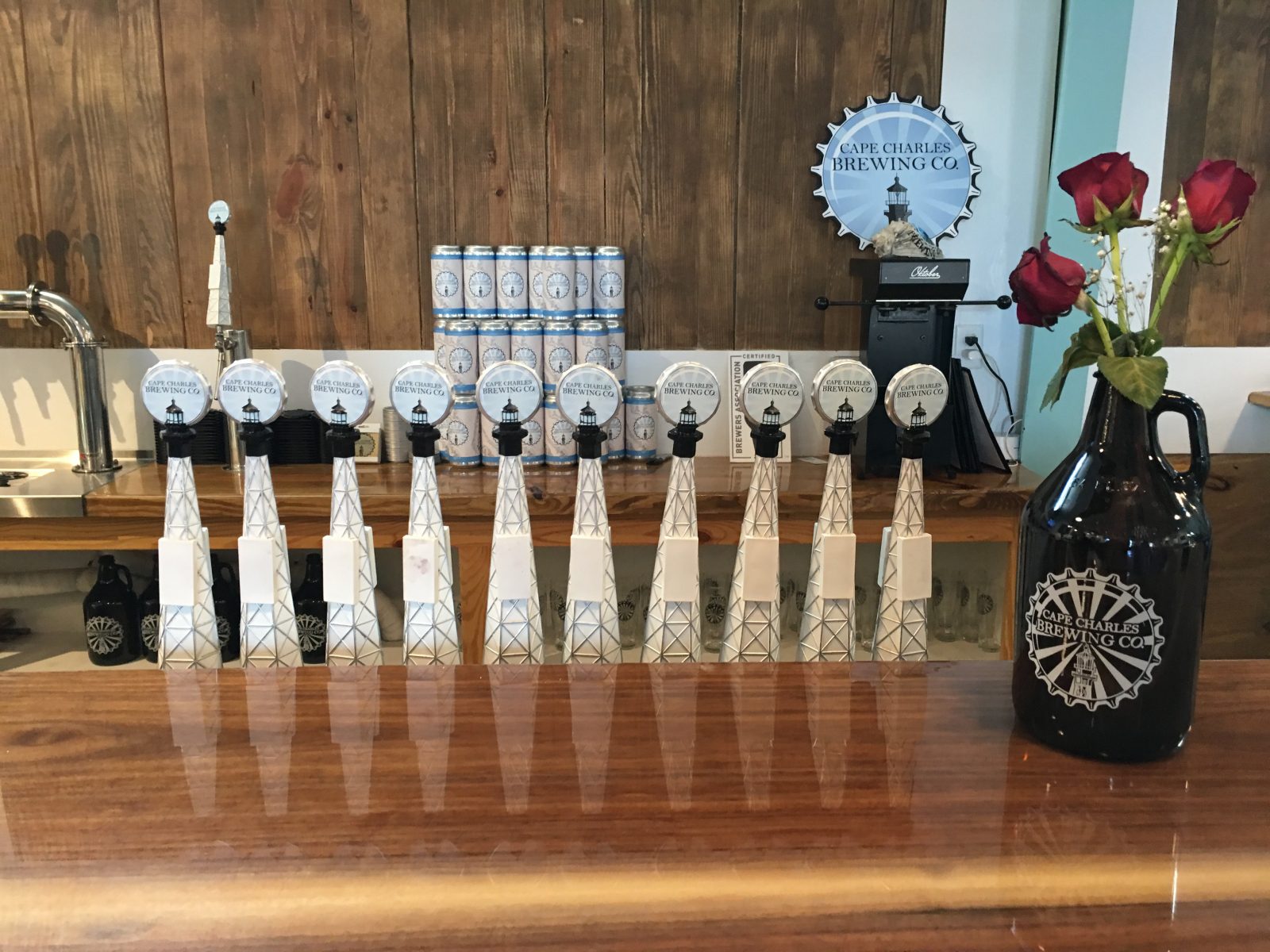 Prior to the establishment of Cape Charles Brewing Company in June 2018, the Stone Road venue served the bayside community as both a lumber and hardware store and car collision center. Its once haggard appearance is now unrecognizable with the addition of a shiny 15-barrel brewhouse, black walnut bar, spacious taproom and full-service kitchen. Much of the brewery’s interior, says Mark, is inspired by Nelson County destinations like Blue Mountain Brewery. Its woodwork and design were locally crafted and curated by Mark’s nephew Zach Diamond. 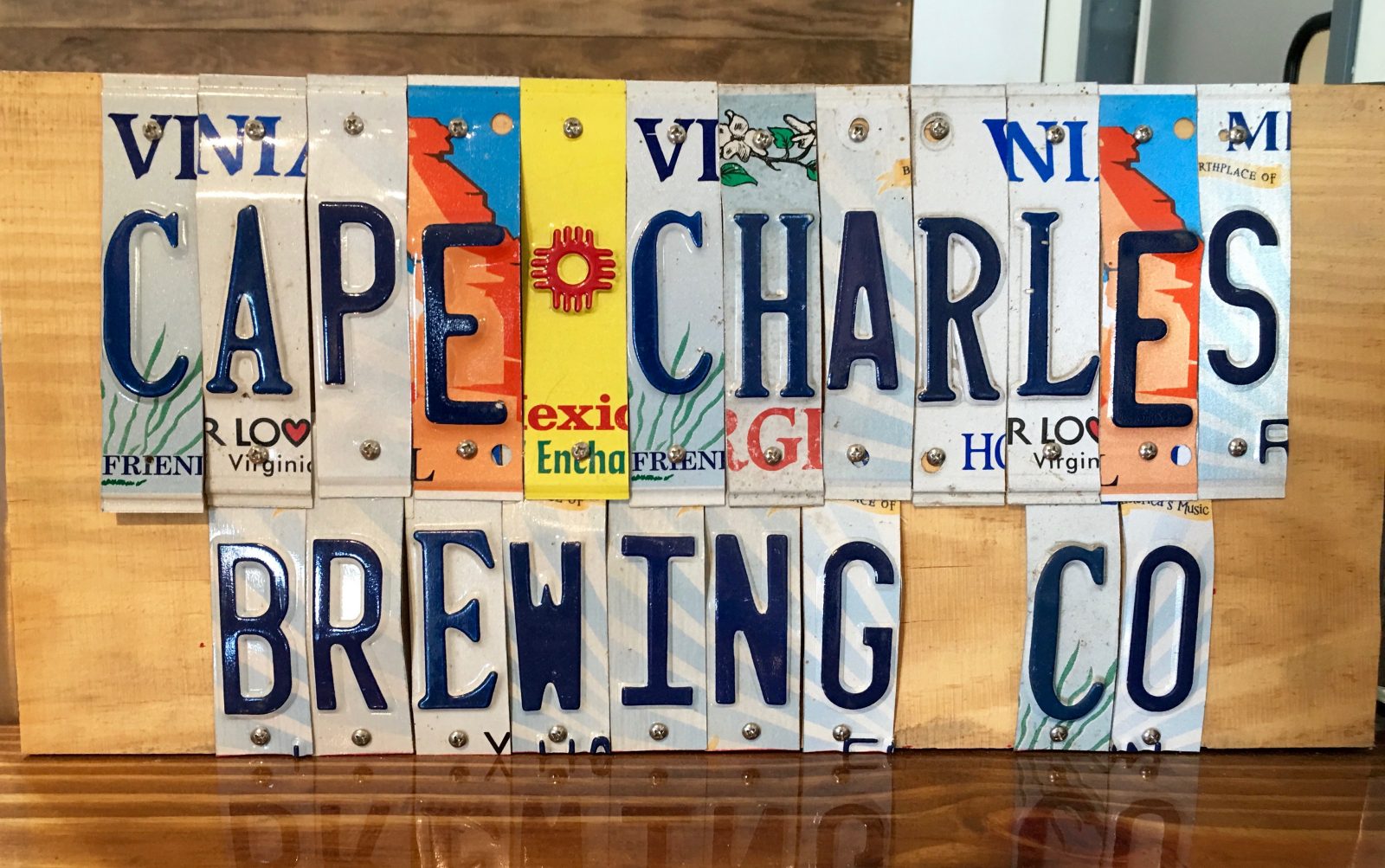 When the thought of opening a brewery first came to Mark in 2016, he had only his vision and homebrewing experience to rely on. While turning the idea over in his mind, he recruited the business knowledge of his brother and mother, thus advancing the daydream to a full-scale family project.

Chris co-founded gourmet baking mix company Delisheries with his mother in 1997, who just 10 years prior co-founded the widely celebrated Sugar Plum Bakery in Virginia Beach. Between the trio’s food industry experience, drive and passion for beer, a Cape Charles brewery seemed not only exciting but doable.

The next obstacle: financing. The Virginia Tourism Corporation brought to Mark’s attention the state-backed Industrial Revitalization Fund. The low-interest loan leverages local resources to create profitable redevelopment of dilapidated structures and local jobs. The Marshalls applied for the loan and were awarded a whopping $500,000 in May 2017, therefore securing the funding needed to see their dream through.

With their plan and finances in place, the Marshalls began pub hunting. They scoured the shore for beer-worthy venues, refusing to settle on anything ordinary. Assisting with their brewery shopping was the local King of Beers, Randy Thomas. When Thomas and the Marshall brothers first walked into the hollowed out lumber shop, Mark recalls Thomas saying, “If you don’t get this place, I will.” And just like that, they had found their spot. 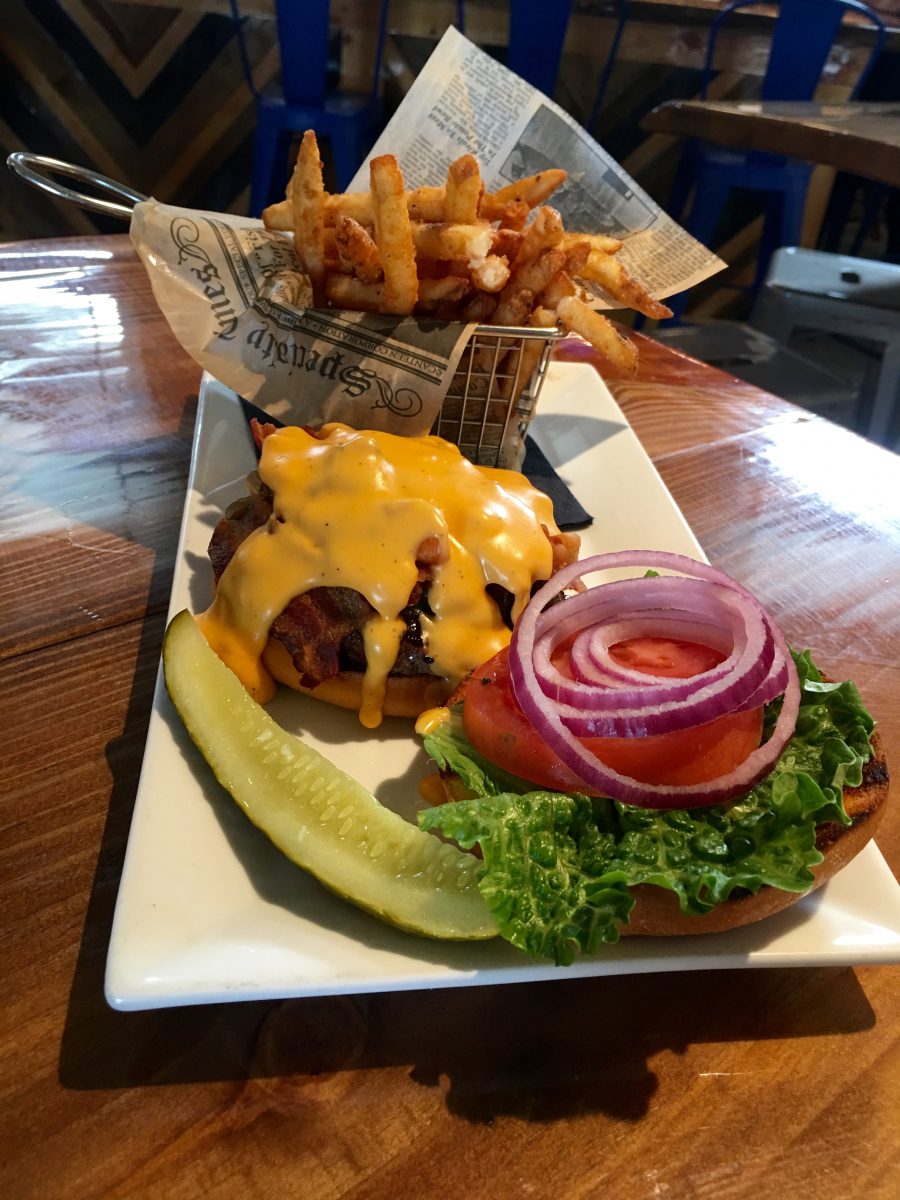 The Marshalls have since transformed the shell of a building into one of the most happening spots in the formerly sleepy beach town. The bar is stocked with ready-to-can crowlers and 30 lighthouse-shaped tap handles inspired by the Cape Charles Lighthouse, the second tallest lighthouse on all of the East Coast. The remainder of the taproom is dotted with a collection of high tops, dining tables and barstools with an expansive view of the brewhouse through a framed picture window.

Ruling over the stainless steel landscape is Head Brewer Brian Martin. The former Three Notch’d brewmaster has introduced a plethora of beach-worthy pours to the coast including the caramel-colored Assateague Island NEIPA, tart Seaside Sour, a tropical Berliner-Weisse called Pineapple pHunk and a handful of historically influenced labels. 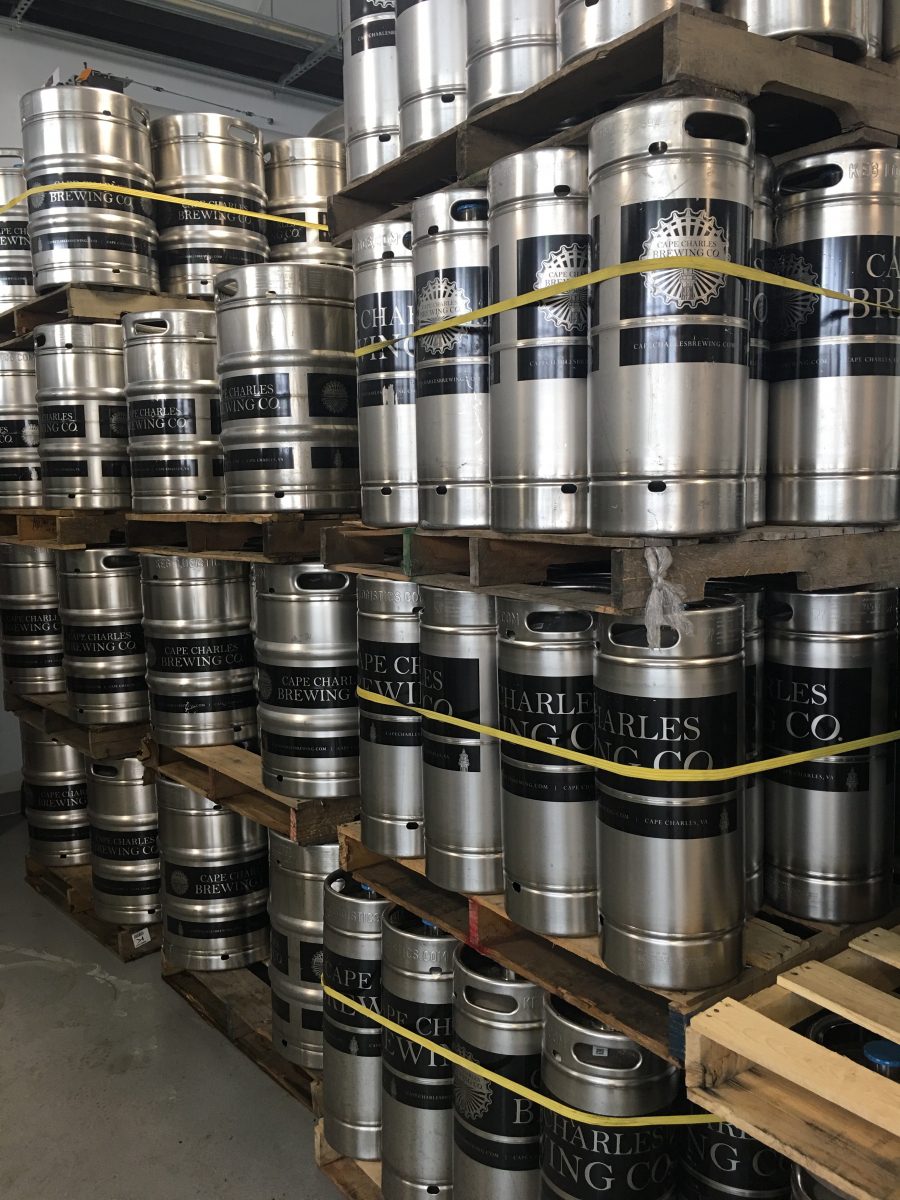 The Marshall team recently installed a canning line to maximize production and the potential for distribution. They have also secured custom labels that boast 19th-century maps and histories of the regions that inspired the brewery’s locally themed beers like the Smith Island Oyster Stout, Cobb Island West Coast IPA and Fisherman Island IPA. Each barrier island bears substantial cultural significance to the Cape Charles area, which, per the Marshalls, deserves to be shared with coastal visitors.

The brew bites, however, speak for themselves as Chef Steve Porterfield loads each dish with freshly caught seafood, nostalgic flavors and downright deliciousness. On the menu are bar staples like soft pretzels, brewhouse wings, beer cheese burgers, pulled pork sandwiches and a trio of tossed salads. Also making an appearance are coastal must-haves such as fish tacos, Oyster Rockefeller, drunken shrimp, ahi tuna burgers and a hearty serving of Porterfield’s award-winning clam chowder. A touch of home surfaces too in a toasty ramekin filled with Mimi’s Macaroni and Cheese.

Having nailed the food, beer and ambiance, it’s fair to say that Cape Charles Brewing Company has earned its title as an Eastern Shore craft beverage destination.