These Sweet Shops Round Out Coastal Virginia’s Bakery Scene 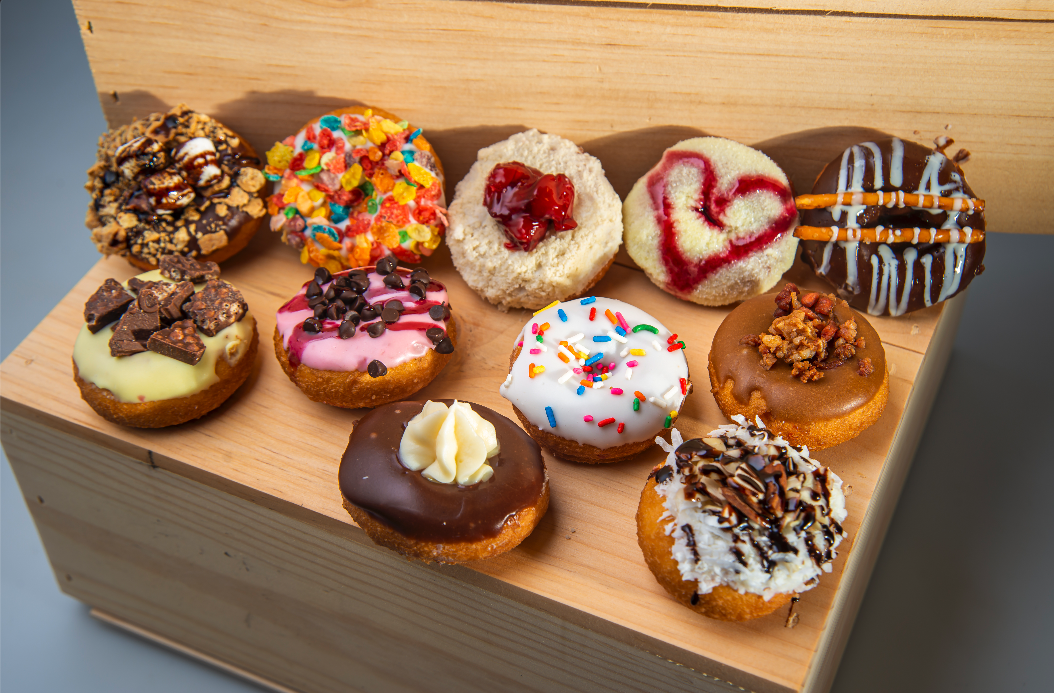 Of all the round foods that qualify as desserts (cakes, pies, macarons, cookies and so forth), doughnuts hold a sweet place in our hearts. The sugary glaze and exciting toppings whip our taste buds into a frenzy while the soft, pillowy consistency bestows a comforting familiarity. Doughnuts are substantial enough to justify a true indulgence yet airy enough to avoid feelings of overindulgence. Plus, their singular portion sizes make them justifiably okay not to share.

Where are the best local places to indulge in doughnuts? We asked; you answered by participating in our annual Best Of Awards. On the pages ahead, you’ll find the readers’ choices winners, plus our editorial picks for satiating that sweet tooth. It’s a baker’s dozen of classic, over-the-top and even vegan and gluten-free options that you do-nut want to miss.

The Scrumptious History of Doughnuts

“Who made the doughnut with the hole in the middle? Just how it got there will be always a riddle.” —Cindy Hutchins, singer/entertainer

Doughnuts (or at least fried balls of dough) have been on the sweets scene for centuries. According to Smithsonian Magazine, these round treats first came around when Dutch settlers brought olykoeks or “oily cakes” to Manhattan.

In the mid-19th century, it seems a mother and son, Elizabeth and Hansen Gregory, each had a method for fixing a common issue found in early doughnuts: disproportionate cooking of the dough. The outer edges would fry to a perfect golden brown while the middle would still be raw. Elizabeth’s method was to fill the pastry’s center with hazelnuts and walnuts (creating literally dough with nuts). She would send these hearty treats to sea with Gregory, a New England ship captain, to help ward off colds and scurvy on long voyages.

Some historians say that, during a wild storm, Gregory skewered one of his mother’s doughnuts on the spoke of his ship’s wheel so he could steer with both hands without losing his tasty treat. This legend is debated; nevertheless, Gregory takes credit for the method of punching out the center of doughnuts before frying, creating the classic shape we love today.

The process of doughnut making became more automated in 1920 when Russian-born refugee Adolph Levitt created the first doughnut machine. This contraption not only made the process faster and more streamlined; it transformed the products from being heavy and grease-laden to light and puffy. This innovative process boosted the popularity of doughnuts, dubbing them “the food hit of the Century of Progress” at the 1934 World’s Fair. 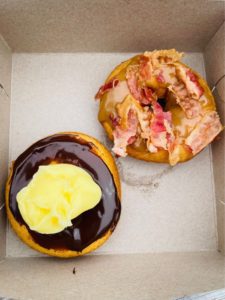 If you thought doughnuts had reached their pinnacle through delightful toppings and drizzles, Amazing Glazed basically said, “Hold my batter.” What’s better than a fresh, made-to-order doughnut? A fresh, made-to-order doughnut paired with creamy frozen custard, that’s what. Their Donut Sandwich features rich Italian gelato nestled between pillowy doughnuts and dusted with powdered sugar. Their Churro is a cinnamon doughnut served with vanilla custard and caramel drizzle. No matter the combination, their doughnuts are nothing short of amazing. AmazingGlazed.com 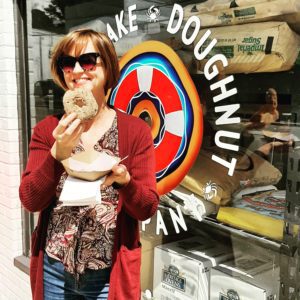 There’s a lot to love in the very little town of White Stone (see article in our Dish section of this issue about nearby Adrift restaurant). And one of those things is this gourmet doughnut shop serving made-from-scratch, organic, locally sourced doughnuts, breakfast sandwiches and high-quality coffee. You can see for yourself exactly how the doughnuts get made through their glass-walled storefront and then come on inside for a classic glazed, a Homer, Samoan delight, maple bacon, toasted coconut and more. Get there early before your faves sell out. CDoughnut.com 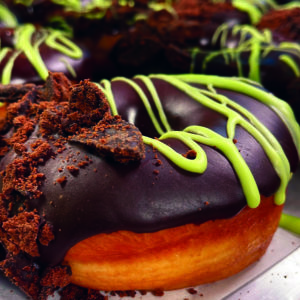 Rolling onto the scene a year ago, Doodles filled a hole in the hearts and bellies of Gloucester locals craving a delicious doughnut. Their fluffy doughnut base has been lauded nearly as much as their fun flavor combinations: peanut butter cup, cookie dough, toasted coconut and key lime cheesecake, just to name a few. As if yummy pastries weren’t enough, they’ve hired adorable goldendoodle Franklin as director of fun to fully round out the experience. Facebook: @DoodlesDonutsandCafe 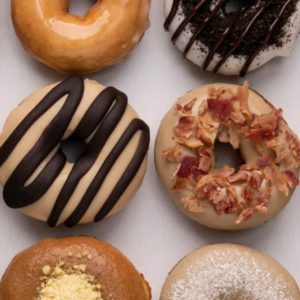 There’s no waiting around for a Hot Now sign to light up here. Duck Donuts’ made-to-order option means warm, cakey, customizable creations every time. What originated in 2007 as a simple doughnut shop in the beloved Town of Duck has evolved into simply marvelous (and locally available) confections. A grand selection of coatings, toppings and drizzles results in seemingly endless combinations, but they even go a step further with sundaes and sandwiches featuring doughnuts as the star ingredient. DuckDonuts.com

When it comes to doughnuts, Emily’s offers something for every style. Classic? Get the glazed, frosted or jelly-filled options in either yeast or cake consistency. Fanciful? Just wait until you see the beautiful creations, decorated for any holiday or celebration you can imagine. Something out of the ordinary? You can’t go wrong with their beloved cronuts—a flaky collaboration of croissant-meets-doughnut in flavors like whipped blueberry cream, carrot cake or cannoli. EmilysDonuts.Square.Site

Life is full of choices. When faced with the more difficult decisions (like cake versus yeast doughnuts), we say order both. That’s right, you can have your cake and yeast it too at Glazed Doughnuts. Choices still abound in flavors, ranging from classic—glazed or gussied up with sprinkles—to fantastic—maple bacon, Cinnamon Toast Crunch or blueberry cream cheese. There’s also a crave-worthy selection of filled doughnuts, plus vegan and gluten-sensitive options. Searching for a shop that has something for everyone? The choice is clear. GlazedHampton.com

Have you seen that line of patrons trailing several blocks at your neighborhood farmers’ market, brewery or coffee shop? They’re waiting for doughnuts, and they’re not wrong for it. It’s clear Klassic Doughnuts is doing something very right with gigantic, hand-shaped and hand-dipped imperfect circles that are perfectly textured: crisp on the outside, chewy inside. Go for classic glazed or cinnamon sugar, or delight in a seasonal favorite like blueberry in summer or apple pie glaze in fall. Facebook: @KlassicDoughnuts 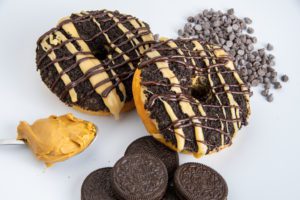 You don’t have to break a vegan diet to enjoy doughnuts, nor do you have to be vegan to enjoy the temptations at My Vegan Sweet Tooth. In 2012, Owner Tonya Deveau turned her baking passion into a career and has thrived for the past decade, shipping vegan treats to fans across the country. Classic vegan options are apple cider, chocolate, Boston cream and lemon. Gluten intolerant? Don’t fret. These same sweets are available just for you in a gluten-free version. MyVeganSweetTooth.com 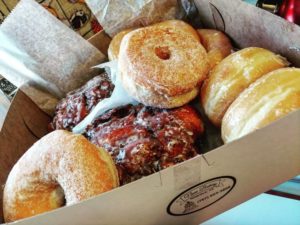 This old-school Norfolk staple hasn’t changed much over the years, and maybe that’s why they’ve been around so long. Who needs fancy signage or hip décor when the pastries speak for themselves? Speaking of pastries, they’ve got cookies, cakes, pies, petit fours and doughnuts—not too sweet, just the right amount of cushion and filled with classics like lemon or raspberry jelly or creamy custard. Most popular are the apple fritters, limited to two per party, because that’s what’s fair. See? Even the hospitality is old school. Facebook: Search “Naas Bakery” 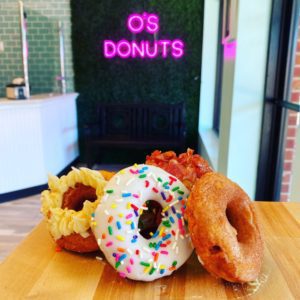 Start with a hot, plump doughnut fried right before your eyes, choose a luscious coating to enrobe it, then top with favorites like sprinkles, nuts, crushed cookies, cereal or candy bars. With options galore, new flavor combinations to look forward to each week and coffees ready for the pairing, there’s always something sweet to sink your teeth into at this Ghent shop. OsDonutsNorfolk.com

Proving beyond the shadow of a doughnut that it’s hip to be square, this food truck from the folks that brought you Lolly’s Creamery has quickly developed a foodie following. Devotees line up on Friday and Saturday mornings, where the truck is semi-permanently parked in the ViBe District, for their “just plain good” Holy Fryer (a crispy fried croissant), “THE BEST” glazed or chocolate iced, all fresh and decidedly angular in shape (round is overrated, y’all). You can also find them at the Old Beach Farmers Market. OkieDoughkieDonuts.com 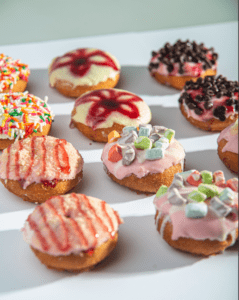 “Feed Your Inner Hippie” is the famous tagline at this Pittsburgh-based franchise that found a home in Virginia Beach last fall. The concept came about by happy accident; a regular-sized doughnut hopper arrived without instructions and resulted in making only little doughnuts. Not a problem. Literally hundreds of thousands of people are fans of this “perfect size,” which is comparable in circumference to a French macaron. Therefore, have as many as you like of the 60—yes, you read that right—flavors. PeaceLoveandLittleDonuts.com 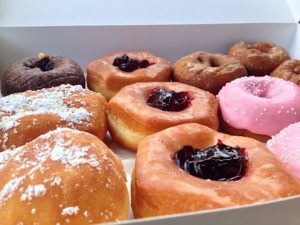 Handmade fresh daily, the offerings at RingO’s range from traditional to trendy—but always tasty. Go classic with old fashioned or hot cross doughnuts. Jazz things up with flavors such as red velvet, coconut, blueberry or German chocolate. Plus, can you operate a doughnut shop in Smithfield without featuring a maple bacon on the menu? Doubtful. Not overly sweet nor overloaded with toppings, these light and airy doughnuts are a hit among Smithfield residents and beyond. Facebook: Search “Ringo’s Donuts”

Click here to see all of the 2022 CoVa Best Of Readers’ Choice Winners.

Cake Versus Yeast: Which Side Are You On?

We can all agree doughnuts are tasty, but which base is better—cake or yeast? Cake doughnuts are (obviously) closely akin to a cake; some are dense and some airy. They rise from baking powder or soda added to the batter, whereas yeast doughnuts inflate through the process of fermentation. Yeast doughnuts are less sweet and more ethereal.

We’re not here to take sides. But, curious on the handling of such a hot topic, we took the only reasonable approach: starting a debate on social media. Both sides had some strong opinions.

“Yeast is like eating air,” proclaimed Kim P. from Chesapeake. “When I have dessert, I want to feel gluttonous. Only cake doughnuts do that.”

Sarah D. from Norfolk seemed to appreciate the airy qualities of a yeast doughnut, adding, “Yeast doughnuts do an amazingly magic disappearing act that makes room for 14 more.”

David B. from Portsmouth, either at an attempt to make peace or through authentic fervor on the topic, ended the debate with this: “Being asked to pick one’s favorite doughnut is like being asked to pick a favorite among your children. They’re all good.”