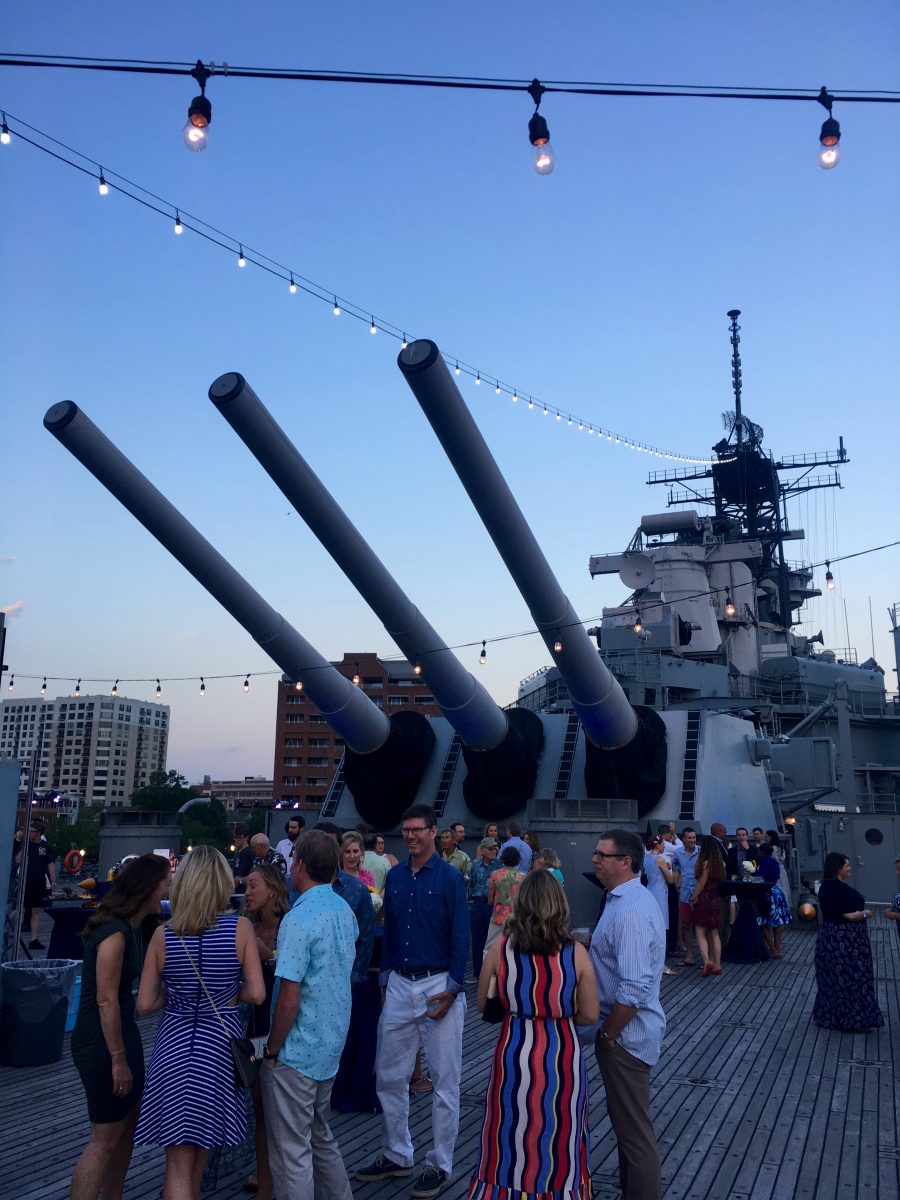 Docked at Nauticus in Norfolk, the massive Battleship Wisconsin was host to an evening full of seafaring fun during the 5th Annual Gettin’ Frisky on the Wisky waterfront party on May 12. Aboard the ship, guests dressed in nautical chic attire with striped shirts, fanciful scarves and boat shoes, and indulged in fantastic fare and delightful drinks, danced to live music and partook in games and a silent auction while raising funds for the nonprofit and party’s host, Sail Nauticus.

The nautical night began within the Nauticus museum’s lobby with a signature daiquiri, shaken together with Tidewater Rum from Norfolk’s new Dead Reckoning Distillery and garnished with a splendid lime. On deck and with a drink in hand, marvelous strings of shimmering light bulbs hung overhead and above the Wisconsin’s enormous turret, as they set the party’s tone while the sun set over the Elizabeth River. 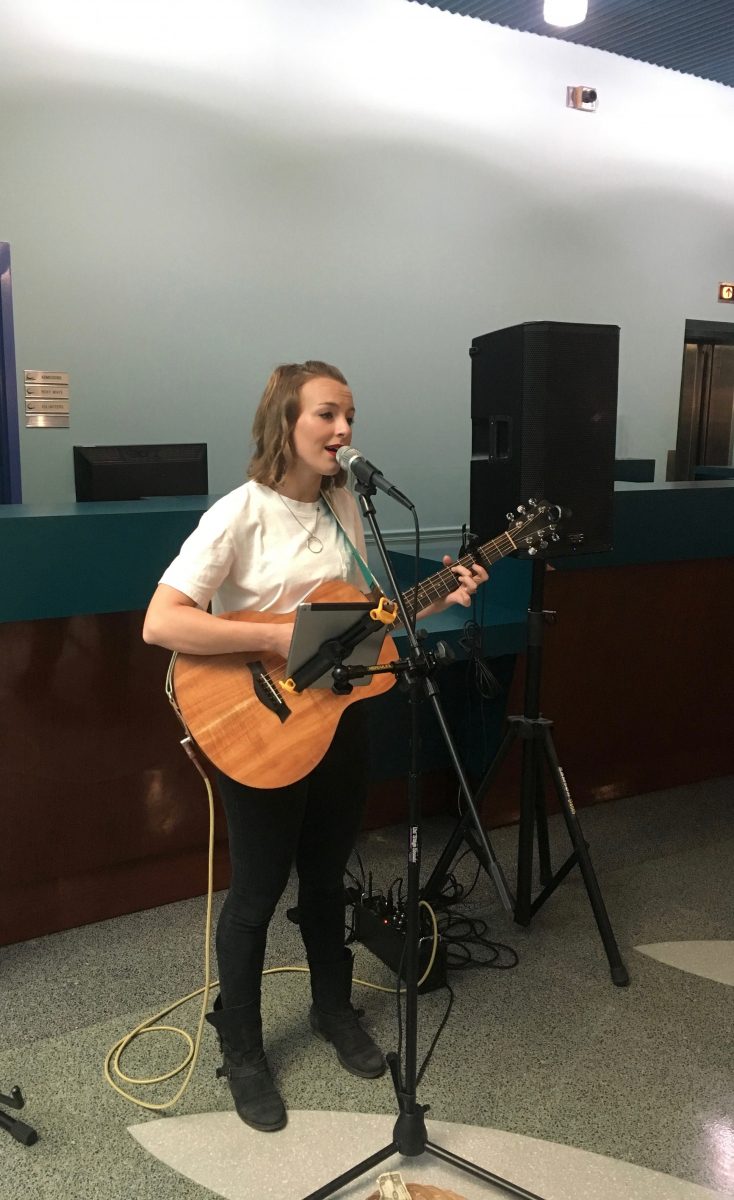 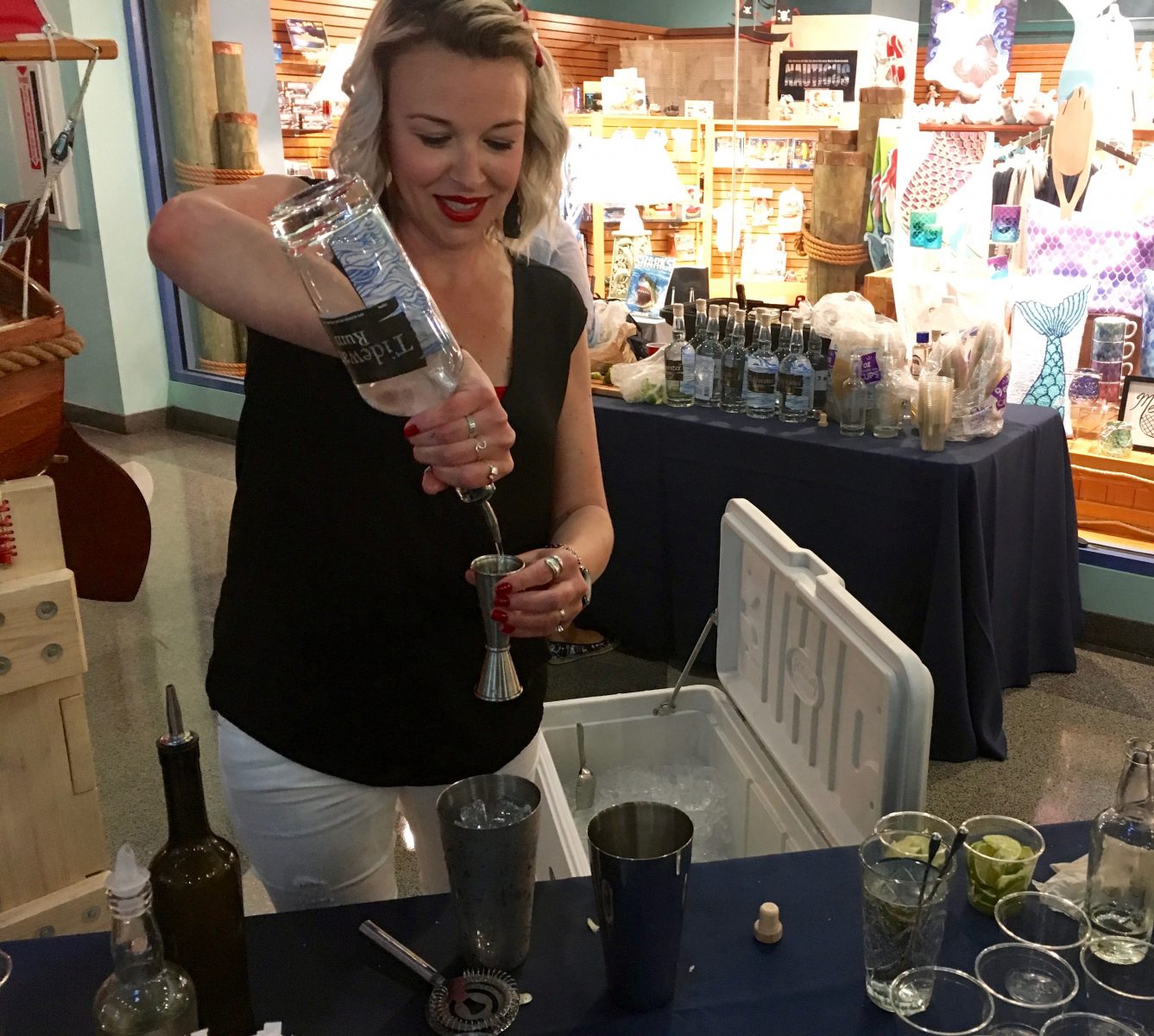 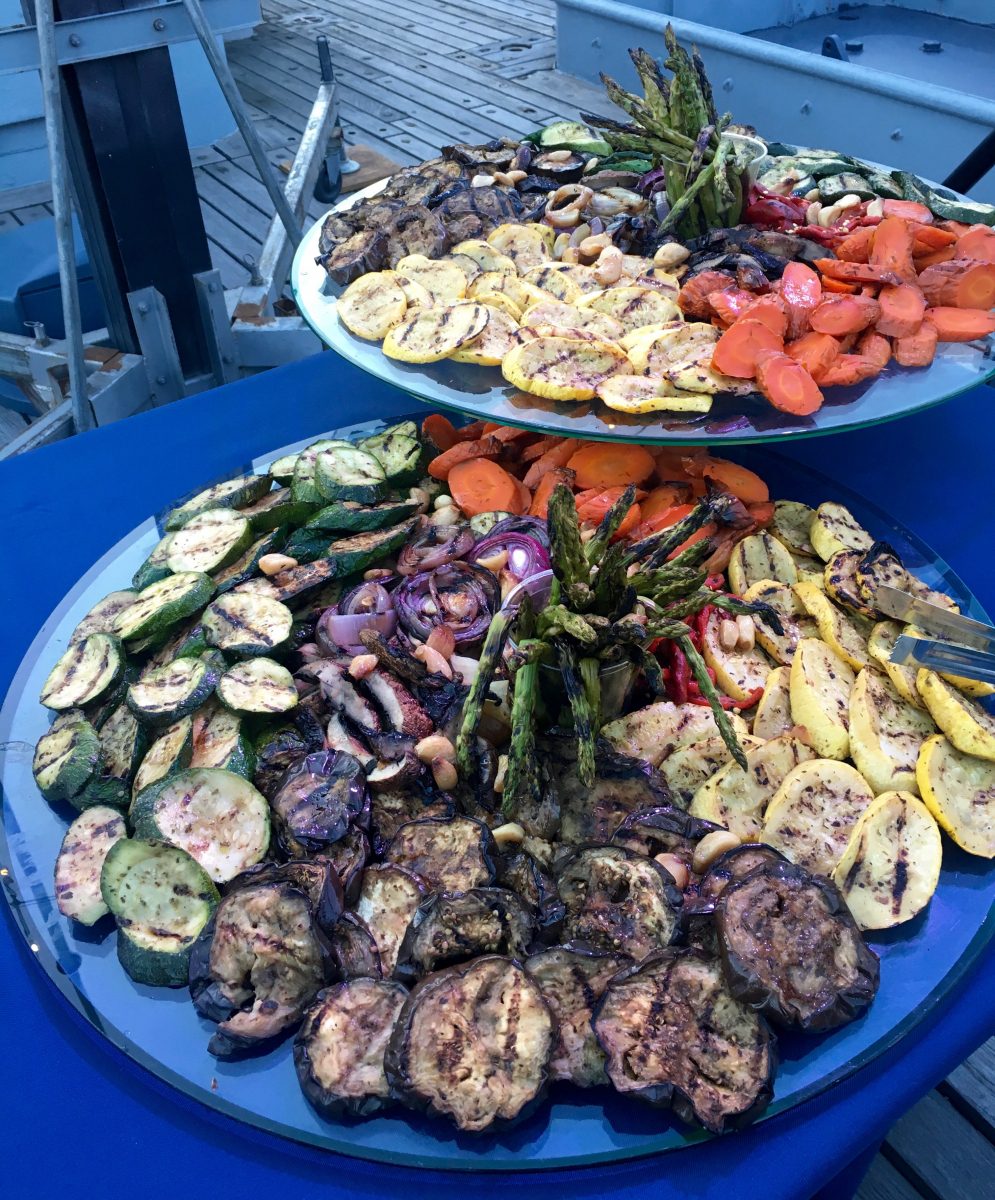 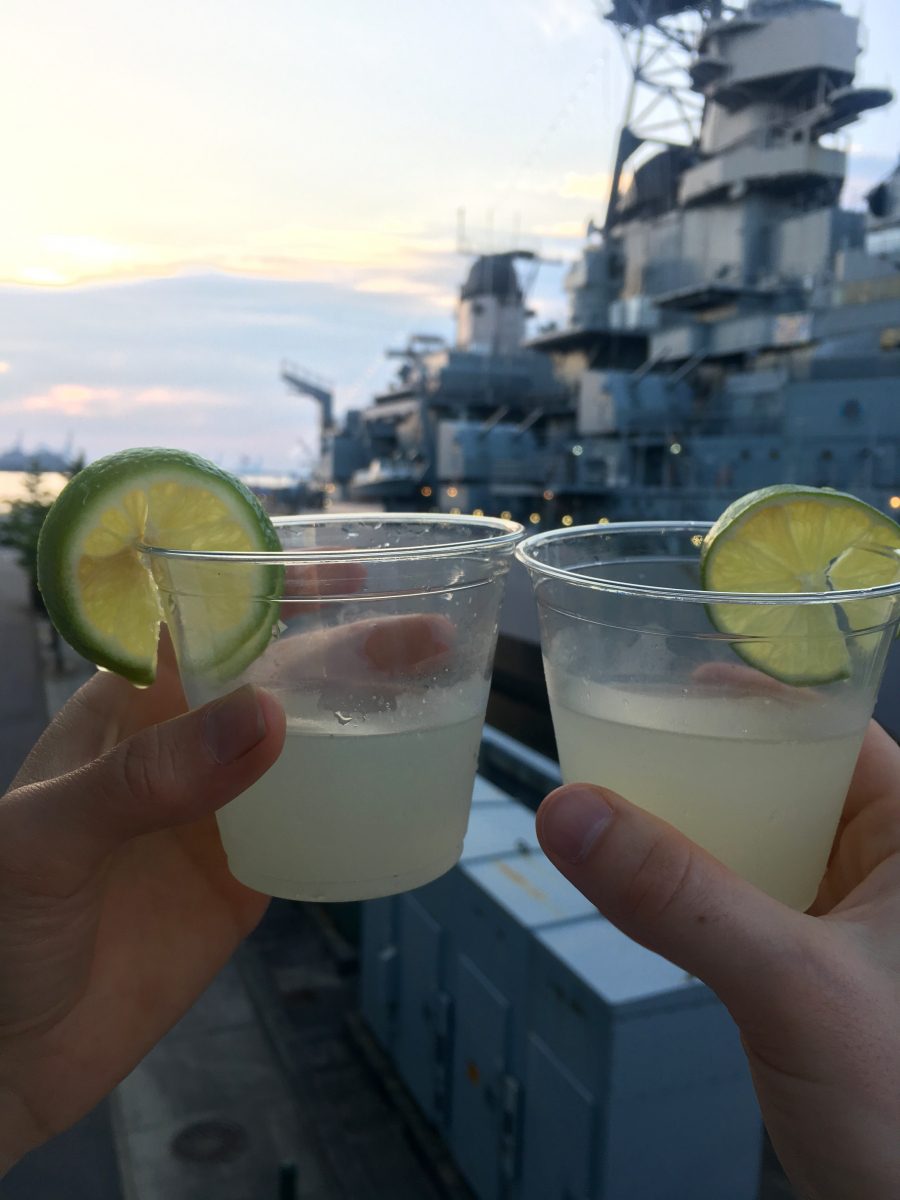 Chef By Design Catering dished out heavy hors d’oeuvres with a selection of phenomenal grilled Mediterranean vegetables, garlic hummus and pita, seafood and tasty servings from a macaroni and cheese bar with an assortment of toppings. Pairing bites with brews, the Wisky’s crew provided pours from an open bar with craft beers from Smartmouth and O’Connor Brewing while platters of finger foods made their way around the battleship. 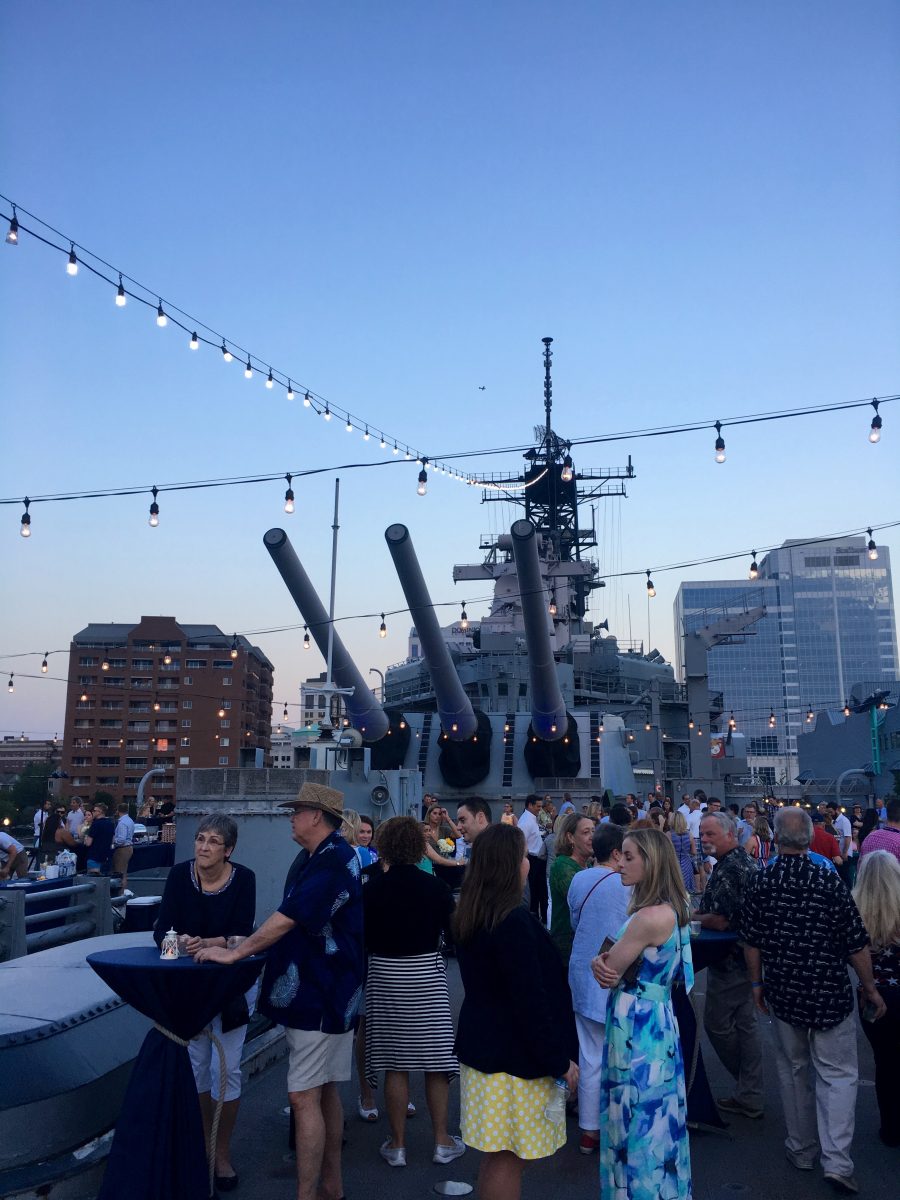 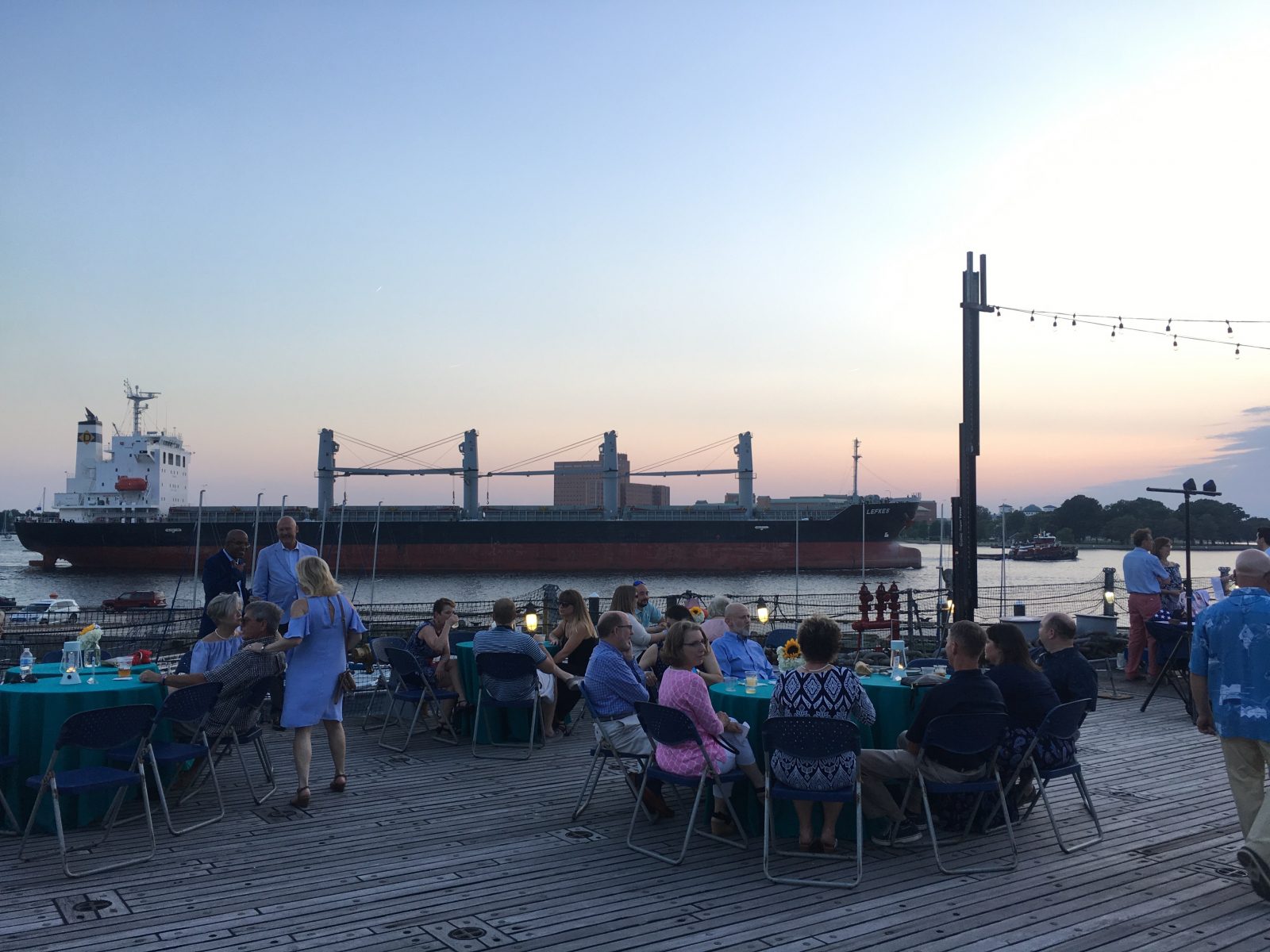 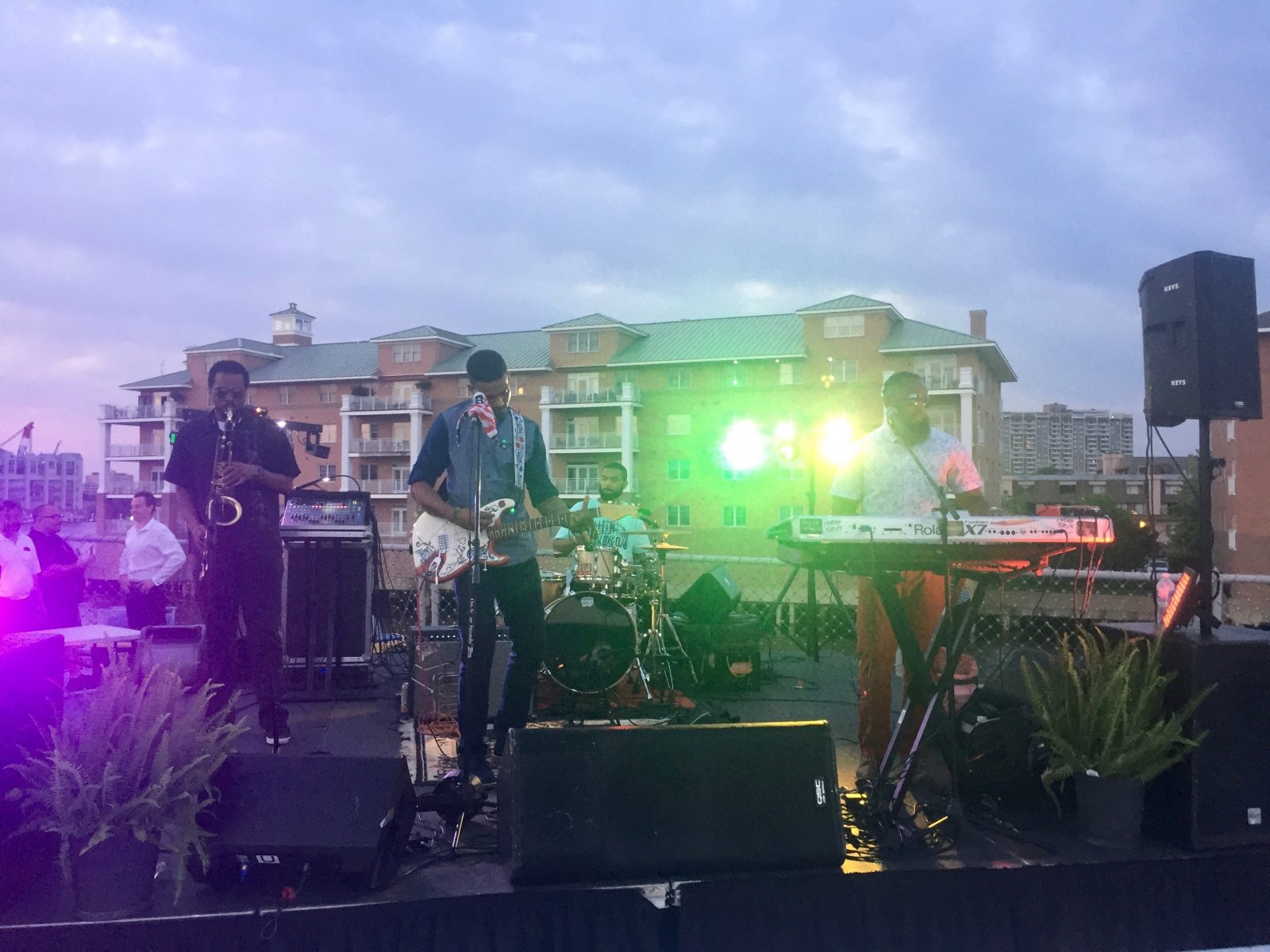 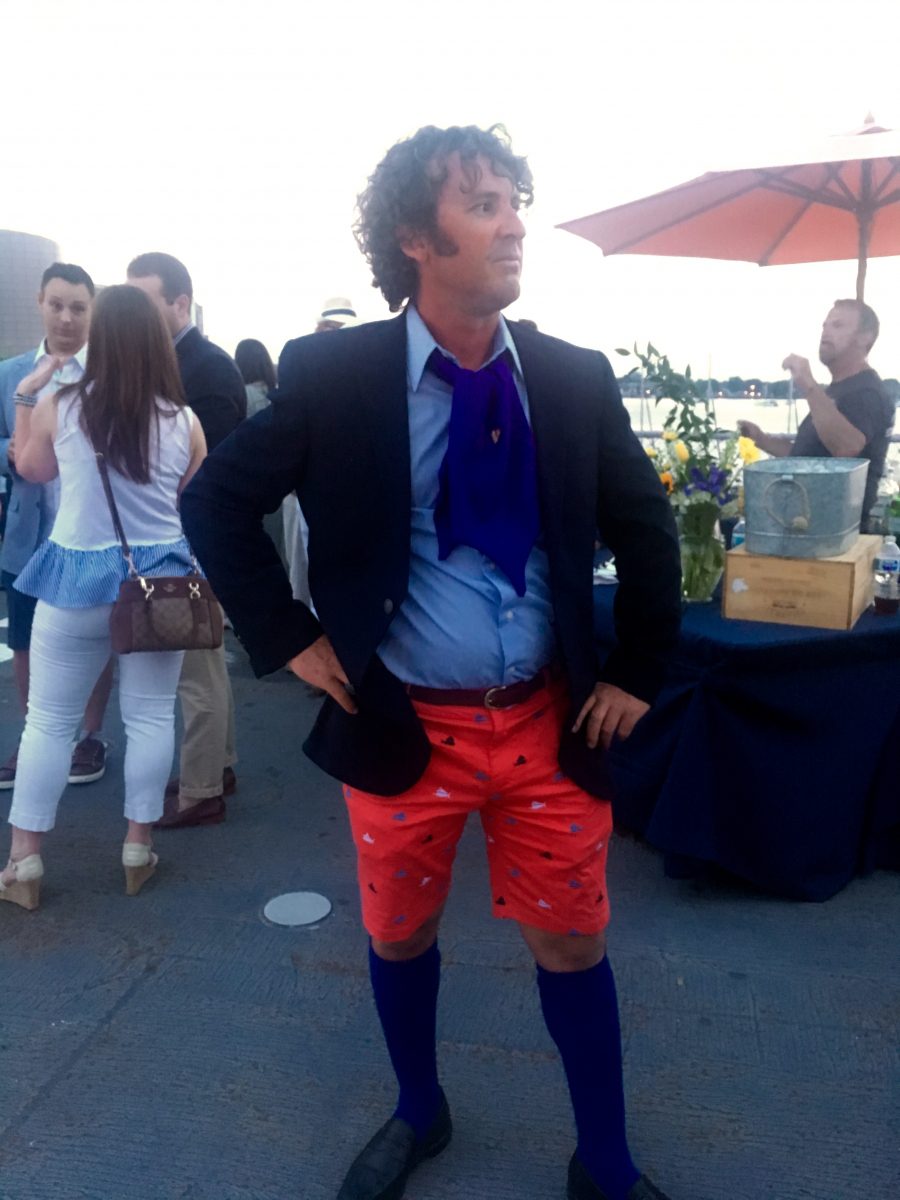 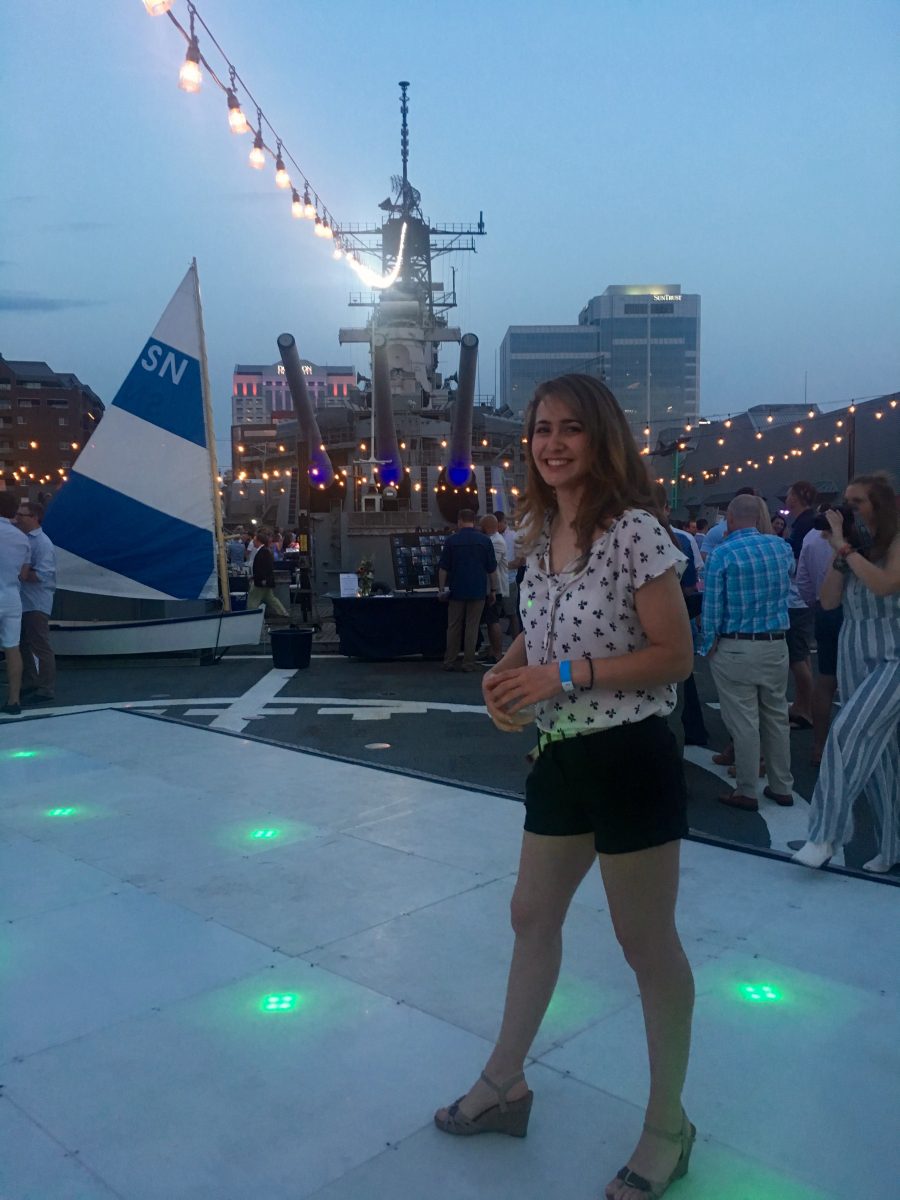 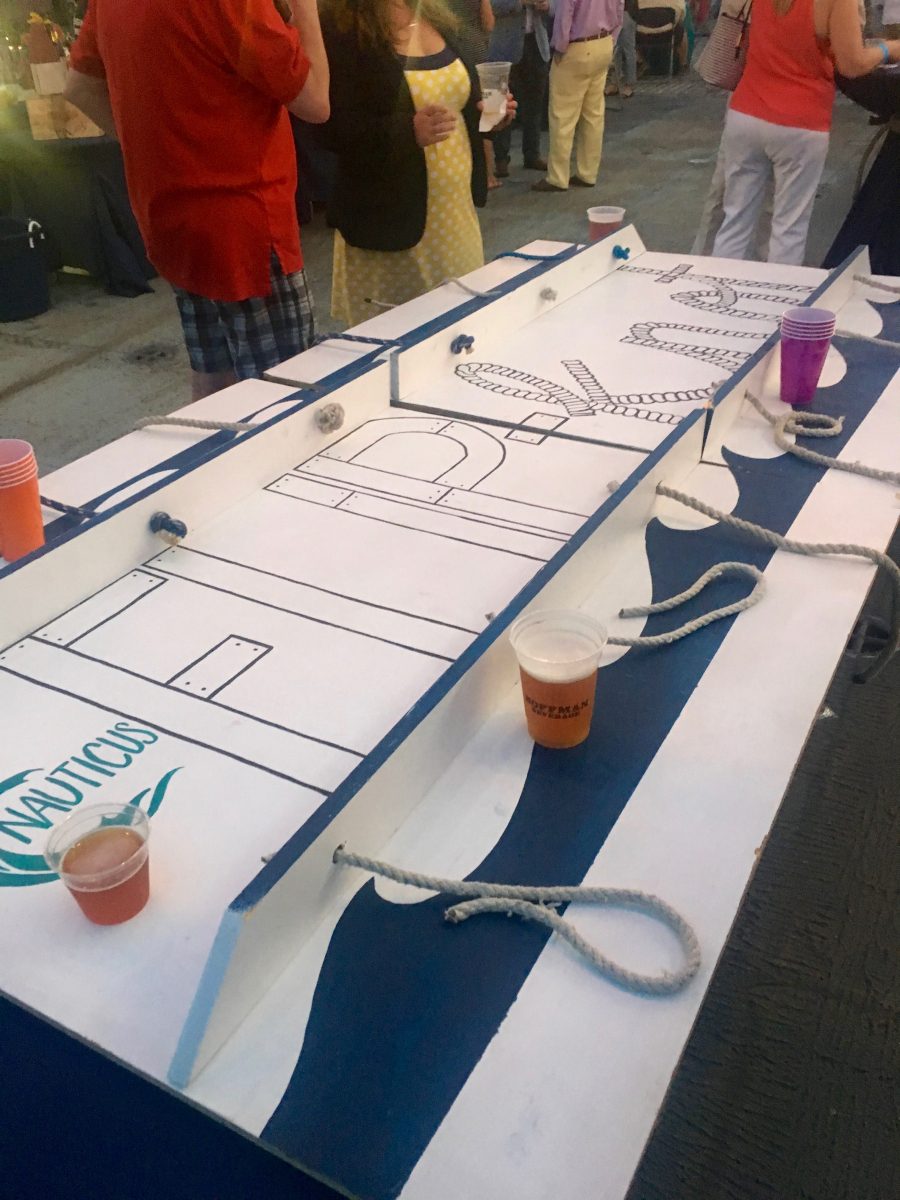 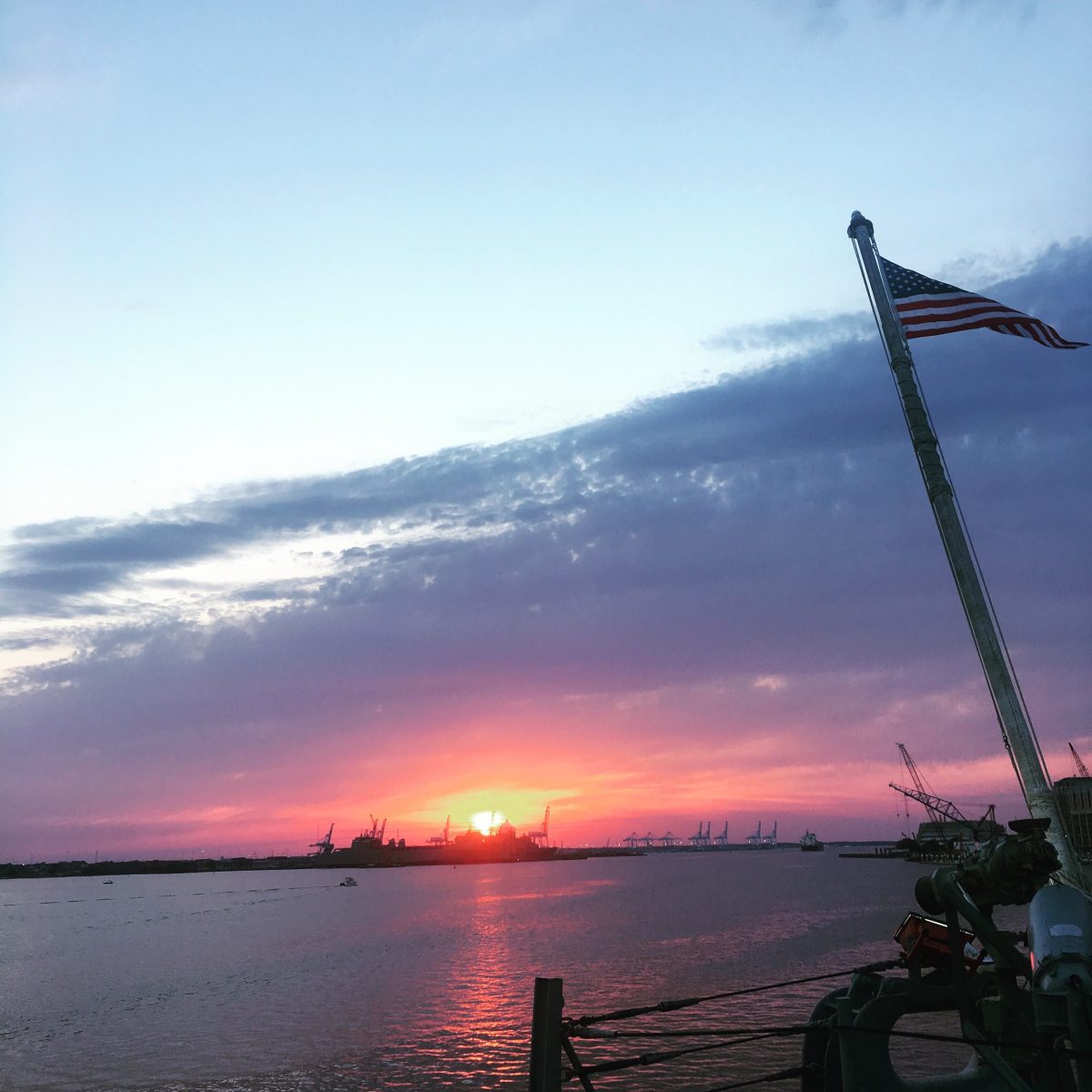 Ships cruised down river as Cheap Thrills took to the stage to play soulful and stylish takes on pop hits in front of a luminous dance floor glowing with colors. We joined in on a boisterous game of Flip Knot, a sailing-themed escapade similar to the drinking game flip cup. Two teams of players faced each other on opposite sides of a table crafted for the event with lines of rope and cups of beer. Opposing players directly facing each other had to quickly down their beer, tie a proper sailing knot and then flip their cup right-side up with one hand before the subsequent player on their team could continue the process, with the first team finishing being claimed the winner. Even though a gale blew aboard, knocking over a cup and thwarting our winning effort, it was still a valuable learning experience, as we were shown the ropes for sailing, quite literally, with an introduction to basic knot tying.

While the frisky party carried on through the night, it also served as a fun fundraiser for Sail Nauticus, a nonprofit which partners with Norfolk Title-I middle schools to provide opportunities for students to learn new skills for life. Proceeds from the admirable event benefit Sail Nauticus and its programs, such as Sail Quest summer camps and the after-school Sail Nauticus Academy, where youth ages 10–18 learn how to sail while developing skills in math, science and leadership. Earnings were also collected from a silent auction, which featured a prized trip for two to San Francisco for America’s Cup yacht sailing valued at $5,000. While I stood at the bow of the ship and peered out at water, it was pleasing to reflect on how an event replete with maritime merriment also gives salute to a noble cause.

Nauticus supports our community’s connection with the water through outreach with Sail Nauticus as well as with intriguing museum exhibits. Opening June 9, the new exhibit, Shipwreck! Pirates & Treasure will showcase world-class archeological work in the deep ocean with over 500 authentic shipwreck artifacts. See more about the exhibit here.